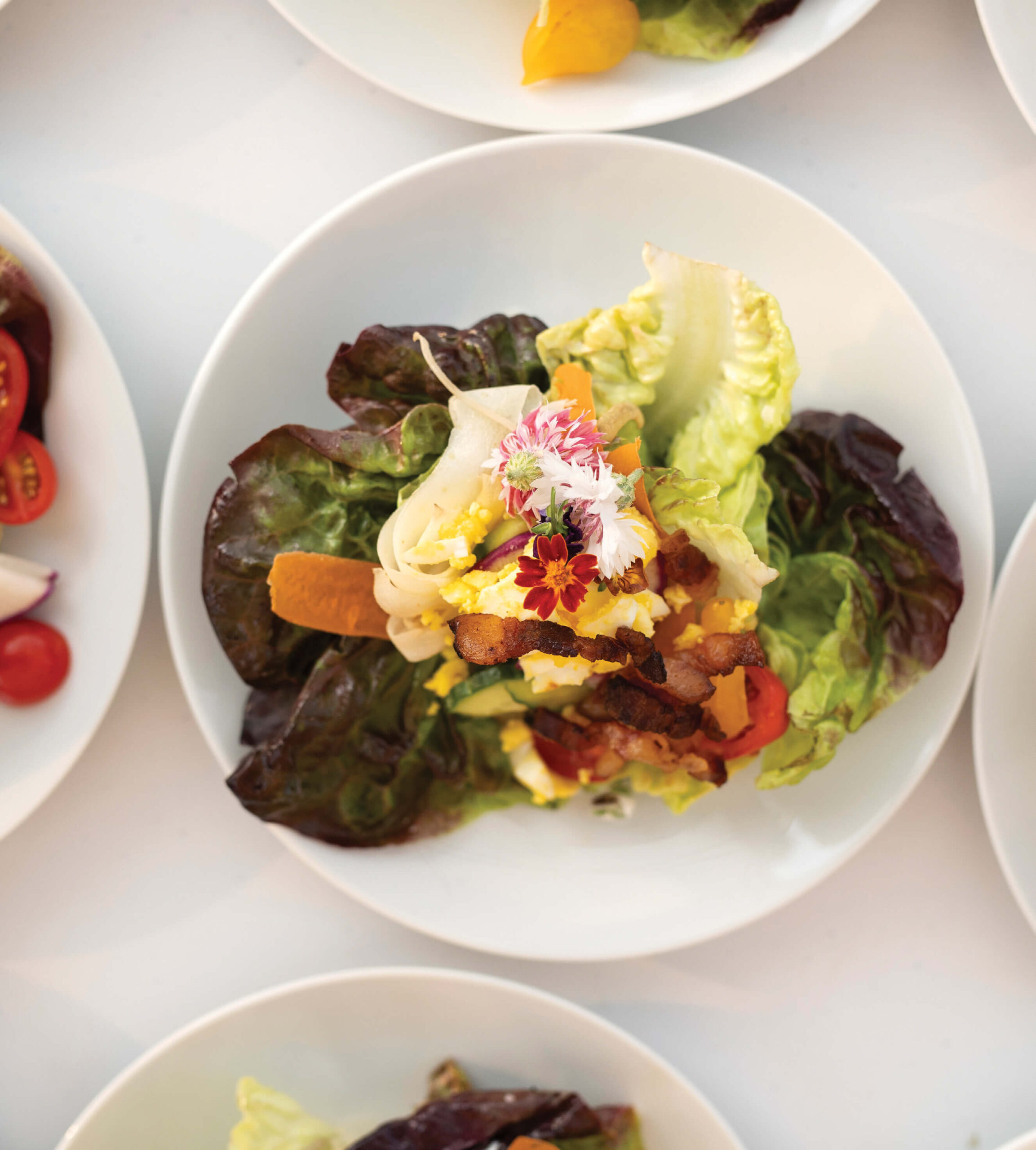 It’s well past high-noon on a late-summer afternoon, and chef Melissa Harrison is standing in a field at Hardscrabble Ranch, east of Bozeman, Montana. Holding her hand on her forehead to shield her eyes from the sun, she looks out toward the horizon, checking the weather. Smoke from regional wildfires has obscured the Bridger Mountains, and a mass of dark clouds is moving in from the east. A hard wind snaps the yellow awning that shades two rows of long dining tables, where a few servers fold linen napkins and set silverware. Others are unloading folding chairs from a U-Haul truck parked next to the dining area. The sold-out Seasonal Montana dinner is scheduled to begin in less than two hours.

Harrison closes the weather app on her phone and turns back to the bustling portable kitchen. “Move a little faster, kitchen,” she calls to her team. “We’re going to get a thunderstorm!”

During a Seasonal Montana dinner at Hardscrabble Ranch, located just outside of Bozeman, guests are surrounded by views of the Bridger Mountains, with Ross Peak in the distance and hazy skies from regional wildfires.

She gets back to work, joining three other cooks as they move quickly and skillfully around an organized collection of folding tables, a portable smoker, two grills (a flat-top and regular one), numerous plastic kitchen containers, and a rolling rack that holds sheet pans of cooked whole chickens. “What happens with this grill if it starts to rain?” asks Lindsey Flanner, who’s tending to the fresh Swiss chard on the hot flat-top — instructed by Harrison to give it just a “kiss of heat.”

“Things get wet, just keep cooking,” Harrison replies. “This is the rain plan.” 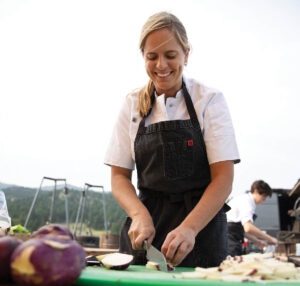 In the portable outdoor kitchen, Harrison chops kohlrabi and German turnips for the entree that was cooked on-site that evening.

There are easier ways to serve dinner to 100 guests than in an open-air pavilion located in a smoky, blustery mountain meadow. The nearby enclosed barn comes to mind. And a brick-and-mortar restaurant is the standard approach. But for the past 11 years, Harrison has chosen similar locations and championed summertime farm-to-table events come rain or shine.

Harrison was raised on a farm in rural Maryland, where eating fresh local food was part of everyday life. Ever since, she’s cultivated that foundation, attending culinary school at Baltimore International College and placing importance on local food throughout her career. As a young chef, Harrison moved to Boulder, Colorado, where she worked for the Big Red F Restaurant Group, an umbrella company that represents a collection of eateries, including Centro Latin Kitchen, Jax Fish House, and The Bitter Bar. While working there in 2008, she was invited to be a contestant on “Top Chef,” a popular reality show and cooking competition on the Bravo network. Performing in front of some of New York City’s most well-respected chefs not only put Harrison’s culinary and creative skills to the test, but also her resilience — which is perhaps how she manages the unknown factors involved in the outdoor dinners she hosts today. 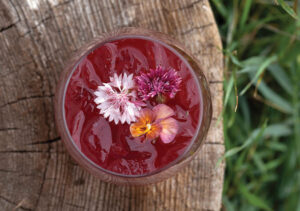 Huckleberry limeade with vodka was one of the creative libations featured during a seasonal dinner.

In 2009, Harrison left Big Red F to work as a guest chef for two months at Rancho Pacifico, a five-star luxury resort in Costa Rica, where she expanded her culinary endeavors in farm-to-table cuisine. Next, she landed at the Martin Pescador Lodge, a fly-fishing getaway in Patagonia, Chile, working there seasonally for five years. During that time, she also discovered Montana, and in 2011 she launched Seasonal Montana as a way to get to know local food producers and market her private chef business.
“I’ve built a business by creating an atmosphere that’s unique,” says Harrison. “For me, everything starts and finishes at the table — putting good food and good energy out there, and bringing people together, makes it more than just eating. It becomes about connecting community.” 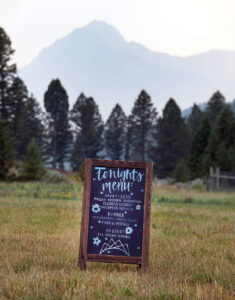 Because Seasonal Montana uses the freshest available ingredients, no two meals, or menus, for the farm dinners are alike.

When her longtime loyal followers — who often refer to her as “Chef Mel” — sign up for one of Harrison’s farm dinners, they aren’t just coming for the food; every Seasonal Montana event is an experience. To create these dinner experiences, Harrison starts preparing food in her Bozeman-based commissary kitchen at least two days in advance. She serves straightforward dishes to showcase the best in-season ingredients, and she creates new menus for each one. “We have such an abundance of farms and ranches in Montana,” Harrison says. “We might not have the best produce year-round, but the proteins are affordable, available, and of the highest quality, hands down.” 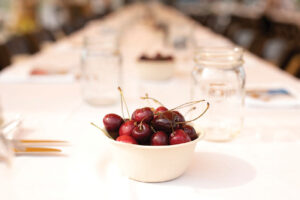 At the July Hardscrabble Ranch event, small bowls of Flathead cherries were an edible part of the table decor.

Harrison offers private chef and catering services throughout the year, but in July and August, her focus centers on the farm dinners. In the past, she’s hosted events at Three Hearts Farm in Bozeman, North Bridger Bison in the Shield’s Valley, and other agriculture-centric locations. And in 2021, she collaborated with Kris and Peter Stewart, owners of Hardscrabble Ranch, which will serve as a home base for future summertime culinary gatherings.

“Server meeting in 15 minutes,” Harrison calls out, while dicing vegetables, in the makeshift kitchen.
“Heard,” the service team resounds. 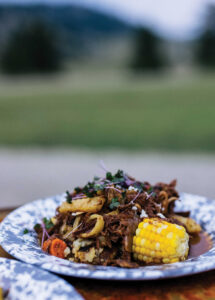 The “Seasonal Tibetan Yak Stew” entree served at an August event featured charred potatoes, hearty greens, kohlrabi, and grilled vegetables in a bone broth with corn on the cob. The yak, sourced from Hardscrabble Ranch, is juicier and more tender than bison and beef, Harrison explains, and is also high in Omega 3s.

At the meeting, the chef explains the course of action for the night, including a walk-through of the timeline and menu, introductions to the bartenders, and explanations of unusual ingredients. The staff takes notes and tastes cocktails and wine. They shoo the ranch dogs away from the pop-up kitchen. A lull settles in as Harrison and her team survey the setting, making sure that everything’s ready for a summer dinner and a night to remember.

By 6 p.m., the 20-mile-per-hour winds have settled into a gentle breeze. The servers, dressed in crisp black and white, stand at attention to greet the first group of guests, who arrive on an ATV driven by the Hardscrabble Ranch “chauffeur.” Two couples gather and smile while overlooking the alfresco setting. With meadows and mountains as the backdrop, long tables covered in white tablecloths and dressed with crystal glassware, feature handwritten name cards, bowls of Montana Flathead cherries, and mason jars of locally-grown flowers. 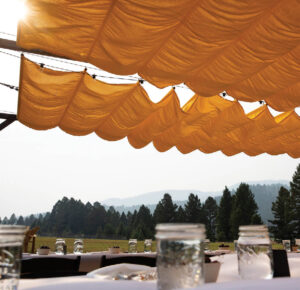 During these outdoor dinners, the weather can change on a dime, but Harrison and her team pull through rain or shine.

The couples amble over to the bar, where craft beers from Montana are offered along with huckleberry cocktails made with locally distilled Bozeman Spirits Vodka. Servers move through the growing number of people, passing out quesadilla appetizers that are made with Montana products, such as Lifeline Farm cheese and Senorita’s Salsa. Some mingle and visit with each other, and a few guests walk up a hill to take in the views. The atmosphere is comfortable and the sky glowing with a red sun.

Before dinner is served, Harrison introduces the Stewarts, who share their vision for the ranch as a venue to serve as a gathering place for family reunions, weddings, and retreats, as well as a simple getaway, and a place where the pace is slow and easy. Tents for summer glamping and year-round lodging are available on the 80-acre property. “It’s a place where people can come and be together, spend real time with each other, and just decompress,” Peter says. “Tonight is a perfect example of how we’d like to continue sharing Hardscrabble Ranch with all of you.” 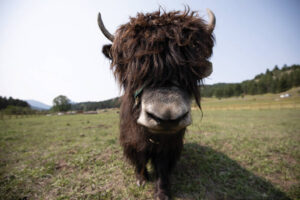 Copo, a Tibetan yak, resides at Hardscrabble Ranch, along with others.

Next, Harrison explains the menu, which features chicken and pork from animals raised at Hardscrabble, along with greens from Gallatin Valley Botanical, watermelon from outside of Missoula, and potatoes from Belgrade. She credits the Stewarts for their approach to organic and humanely raised livestock, and explains how small farms and ranches add to Montana’s economy, preserve authentic ways of life and undeveloped land, and supply communities with fresh, local food — fostering connections between those who value quality food and the landscapes that are supported by these efforts. She also introduces the executive director of Gallatin Valley Farm to School, which furthers awareness of the importance of eating seasonal, local foods and of making it accessible to everyone. The formalities are brief but informative, and they seem to resonate with the crowd that listens respectfully.

“I’ve been coming to Seasonal Montana dinners for a decade,” says one guest who is dining with her husband and parents to celebrate her father’s birthday. “It’s the highlight of our summer.”