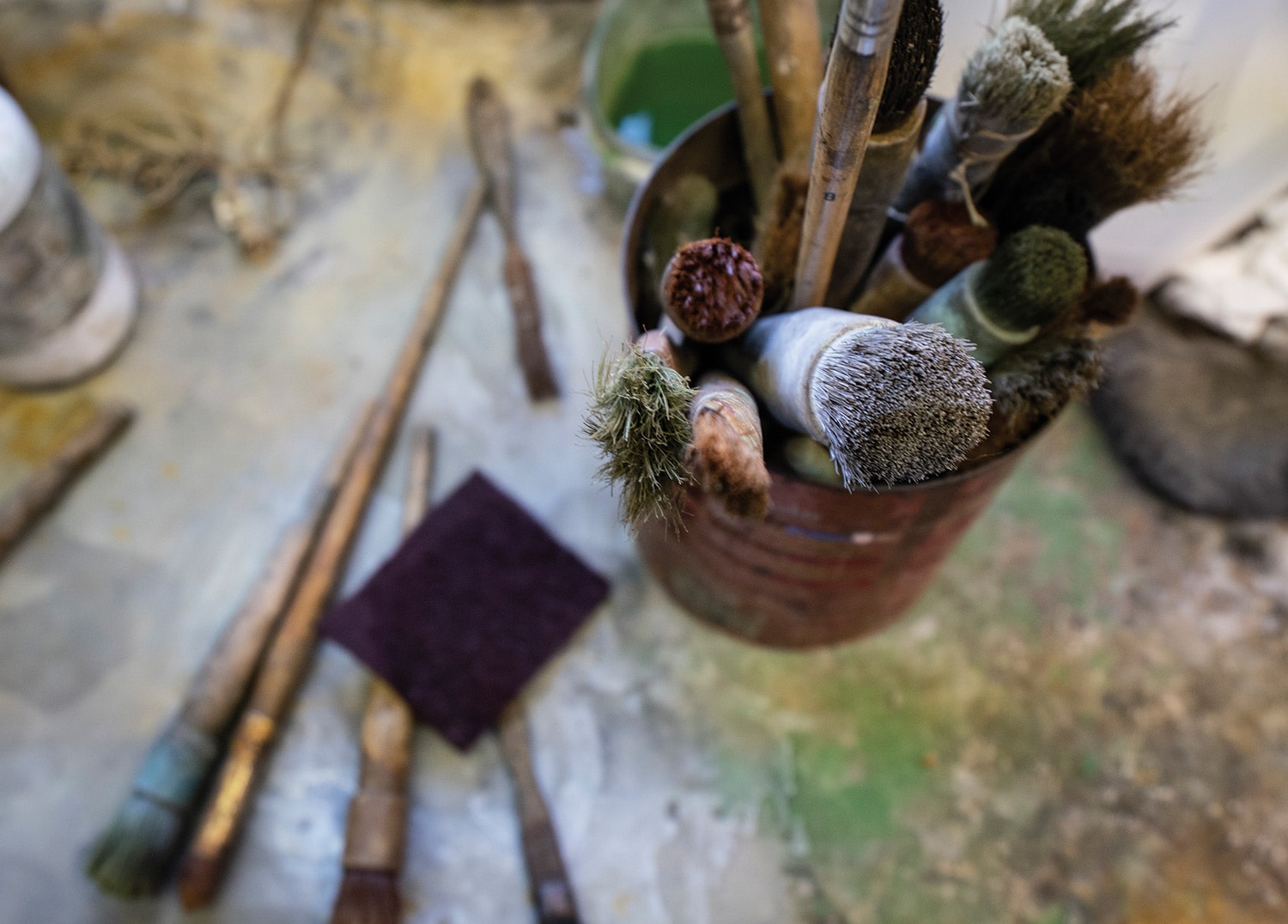 ANYONE WHO’S EVER STRUGGLED WITH RELATIONSHIPS would probably benefit from studying the dynamic between bronze sculptors and their patineurs. Because it’s a slow, complicated, and involved process, many artists prefer to turn that work over to other artisans so they can, instead, devote their time to working in their studios. Sending a cast sculpture to a patineur means, however, that the artist has to trust the wisdom and finesse of another. And when it comes to explaining patination — that is, the process of applying the combination of chemicals and heat that both colors and protects the final sculpture — both the sculptors and patineurs frequently make reference to trust. The Billings, Montana-based sculptor Burl Jones is a good example. “I’m not always available to be at the foundry when they cast or when they do the patina,” he explains. “But I am very satisfied with what they do in general. It’s an art all by itself, and I rely on other people who are highly skilled and trained to do the patina.” Jones sends his work to a number of different foundries in Montana, including Northwest Art Casting outside of Bozeman, Kalispell Art Casting, and Art Castings of Montana in Belgrade. “Patineurs are generally artists in their own right in other genres,” Jones adds. “One of the best I ever worked with was an oil painter, and so he understood color.” Sculptor Mike Barlow, whose realistic North American and African wildlife sculptures demand patinas ranging from traditional chocolate to deep umber, conveys a similar sentiment about his work and his relationship with patineur Jill Boyer, of Boyer Bronze in Livingston, Montana. “I’ve relied on the folks at the Boyer foundry for years,” he says. “I know some artists are there for every step of the casting, chasing, and patination process, and in the beginning, I tended to micromanage. But now I let the experts work their magic.” Often a bronze sculpture has to be cast in pieces and then welded (or “chased”) together, which in less than adept hands can leave noticeable traces of the juncture. “I did one piece with them that involved 50 castings put together,” Barlow says of Boyer Bronze, “and I challenge anyone to look at the final product and find even a trace of one of the welds. It’s that good.” After the chasing and clean up, Boyer steps in for the patination. “Part of it is a time issue — it’s better for me to spend my time in the actual creative process in my studio working, but also I trust Jill and give her full rein,” Barlow adds. “She knows what to do, and when the process is going well, I don’t want to get in the way.” In what many consider the Bible of bronze patina books, Patinas for Silicon Bronze, Patrick Kipper writes, “The patineur is probably one of the most important people in the career of a sculptor in bronze. … To decipher color choices in another’s mind may take years of experience.” The patineur has to be adept at the psychology involved in understanding how the artist envisions the final form of his or her sculpture. “It is difficult to reach into their minds and get what they are visualizing,” Boyer concurs. “The more I work with an artist, the easier it becomes. Some artists I have been working with for 30 years or more.”

Though a few sculptors do their own patina work, most do not, as it means having to master the chemistry involved in oxidizing metal in conjunction with carefully applied heat. Sculptor Rick Terry of Whitehall, Montana, learned patination through working in a variety of foundries over the years, and used to do his own. Lately, he’s been turning it over to Diana McClaran at Art Castings of Montana, but he’ll often step in during the application to “buff back” a color, or lighten its tone by rubbing the metal with a scrub pad. “Rick does a lot of his own work,” McClaran explains, “and his patinas run toward the traditional classic browns and dark tones.” Because patination involves both heat and chemicals applied to raw metal, “there are always slight variations in the outcome,” Terry says. “You’re dealing with a lot of variables at one time. It’s somewhat like cooking: You go with what feels good, even if you’re following a recipe.” It takes Terry and McClaran four or five hours to patina one of Terry’s larger sculptures. So just as a patina is a molecules-thin layer of oxidation that serves both to protect and color the final sculpture, it is also a testament of trust between artists. “It’s one thing to learn patination,” McClaran muses. “It’s another to communicate with an artist.”

On the other side of the equation, sculptors appreciate the specialized skills that a good patineur brings in order to perfectly enhance the finished bronze. Brad Richardson of Legacy Galleries, which represents sculptor Tim Shinabarger, explains the relationship this way: “The patineur is not the artist of the piece but is there to enhance or support the artist using his or her particular talent.”