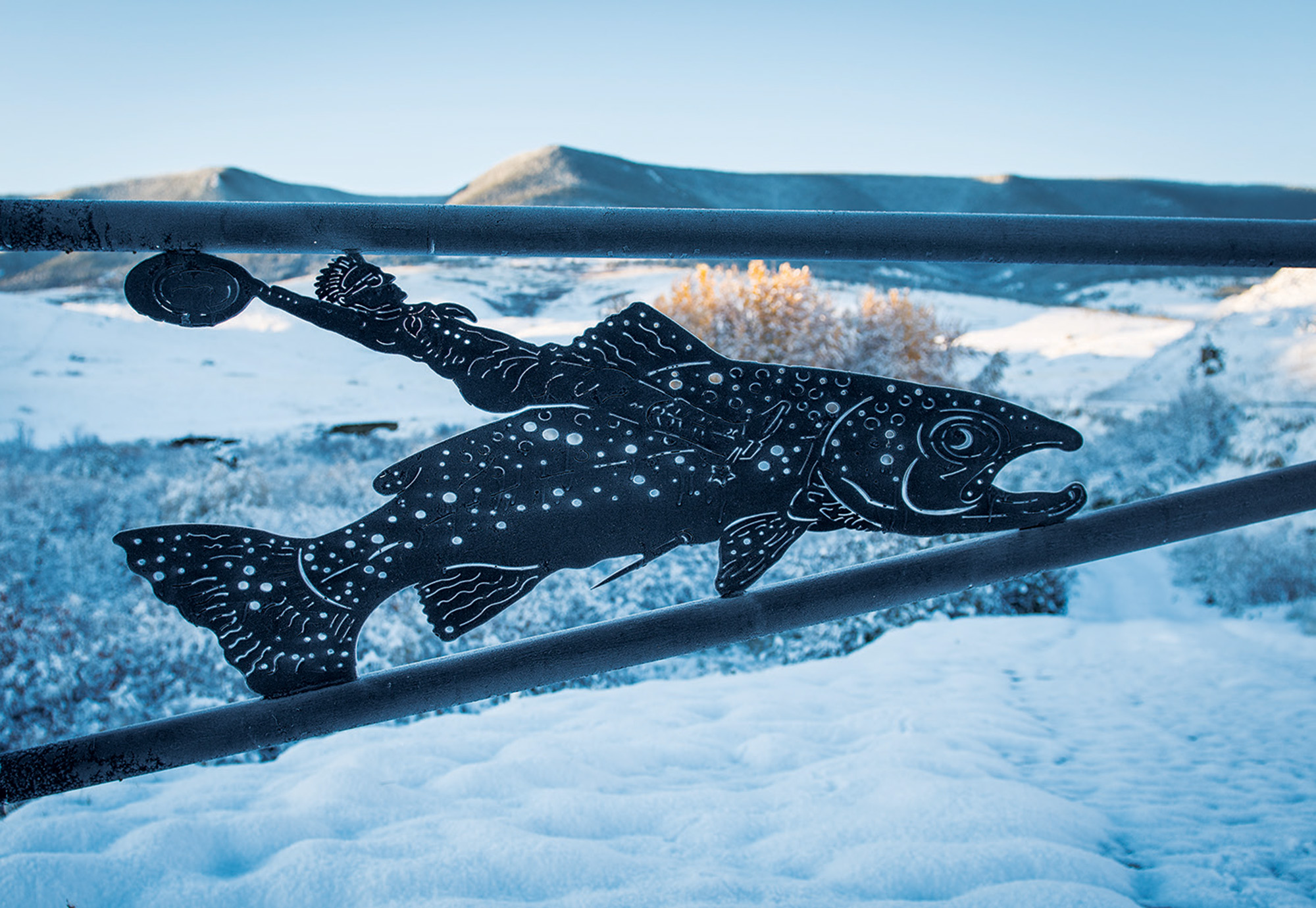 Last fall, a local newspaper article entitled “Wrangling Rattlers with Parks Reece” featured my father doing exactly what the headline suggests. It was the first time I had seen him showcased in the Livingston paper since a photo ran on the front page, in February 2015, of a large truck hauling his cabin across Carter’s Bridge over the mighty Yellowstone River in Paradise Valley. The caption noted that roadside signage was removed to make room for the fully intact dwelling, which also required 14 official flaggers to direct traffic and close roads.

An acquaintance of mine was skeptical whether the stories were real. Apparently, his father doesn’t appear in the newspaper for leisurely pursuits like yanking poisonous snakes out of holes or shutting down roadways with impulsive house acquisitions. But my dad does. So, I explained, the stories are as real as anything else in Parks Reece’s version of reality, which is to say, I long ago lost the capacity for shock.

My father, whose humorous and surrealist wildlife paintings have gained him global recognition in the art world, acquired the cabin after hearing that its previous owner was preparing to demolish it. He sensed a creative opportunity.

After crews spent the better part of a winter day transporting the cabin from Paradise Valley to Cokedale Road west of Livingston, where he owns land, they discovered they couldn’t navigate the narrow driveway. But the home site, a 60-acre spread on Miner Creek, happens to rest along an 1800s-era wagon trail. While now pastureland, the early settlers’ route was flat and wide enough to allow the cabin’s passage — though not until summer after the ground had dried and firmed. It sat on a rancher’s property nearby in the meantime.

Once settled, the cabin became a blank canvas for my father’s imaginative whims, yet another embodiment of his enduring belief that art is everywhere, you just have to go find it (and sometimes you have to retrieve it with a semi-truck).

Over the course of a year, into the summer of 2016, he collaborated with a duo of artisans, Willie Moore and Pete Butler, as they gutted and transformed the basic log home into a “sculpture,” as my dad proudly proclaimed the two-bedroom, two-bathroom finished product. The three would brainstorm regularly, not unlike a television-show writing team, treating ideas like shape-shifting organisms given the freedom to evolve. The result was an exhaustively refurbished house that reveled in the unexpected, with secret doors and trout-engraved windows suggesting a Western Narnia spawned from a 63-year-old child’s imagination.

“It was such a great experience,” my dad told me. “One of us would say, ‘What if we do this? Or how about if we do this?’ We’d think about it and say, ‘Yeah, that would be great.’ That’s how we did the whole project. That created a lot of ebullience. People were running around happy. You don’t see that a lot on construction sites.

Much like the cabin itself was rescued, the interior features a number of recycled elements, including century-old juniper fence posts, organically beautified by weather. They adorn closet doors and trim, and serve as an entryway coat rack, with nails that once held barbed wire now used as hangers, alongside antlers. Other deer and elk antlers, all from my father’s extensive personal collection, make appearances elsewhere as pot hangers, closet and drawer handles, towel racks, and toilet paper holders.

The crew also repurposed 115-year-old ceiling tin from downtown Livingston’s Parks Reece Gallery into interior walls, and created other walls by rusting and stylizing cold-rolled steel with hydrogen peroxide and muriatic acid. The dark metal strikes a balance between rugged and ornate. Willows from nearby Miner Creek were threaded into kitchen features and closet doors, continuing the theme of artful resourcefulness.

Travertine limestone and white marble accent the bathrooms and kitchen, while creek rocks line a shower. Acacia flooring runs throughout the living and social spaces. A hidden trap door, opened with a covert rope pull, provides additional storage in the marble-countered kitchen. Etchings of my father’s paintings, featuring his trademark trout, enliven the bathroom windows. And on the living room ceiling, he painted a mural of a sky scene, with a modern airplane and an old-fashioned propeller plane passing each other, symbolizing the project’s motif: new and old meeting under one roof.

Using a technique called “dry brushing,” he stood on a stepladder for days on end, arms raised directly above his head, grinding down one paintbrush after another to “feather it out and get the cloud effect.” It takes patience and endurance to bring the heavens indoors.

“It was physical exercise,” he said. “I was sore for a couple weeks. And I fell off the stepladder a couple times. I got carried away and caught up in the painting.”

Outside, Flintstone-sized sandstone slabs form a patio overlooking the creek, where native Yellowstone cutthroats patrol the waters and deer take cover in dense willows. Additional rocks provide a pathway to a nearby hand-laid stone fire pit, lined with custom-crafted wooden seats. Many of the rocks and other materials were salvaged by Ray Chavis, an expert log homebuilder who also installed extra windows.

The creative flair didn’t come at the expense of functionality. Quite the opposite, the finished cabin is an optimally-comfortable living space, a place to call home — a working piece of art. 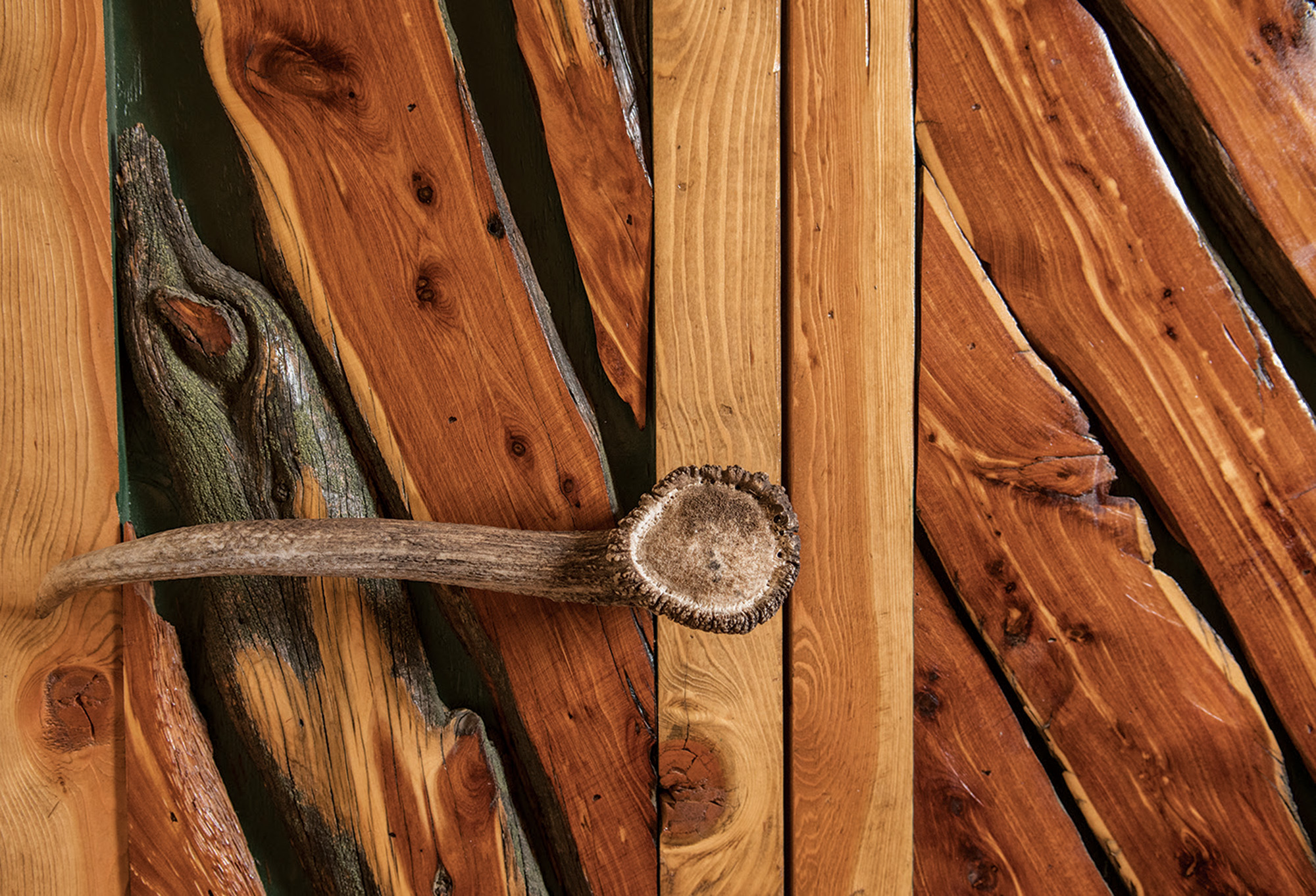 A bedroom closet door was made from century-old juniper fence posts and an antler handle from Reece’s personal collection. 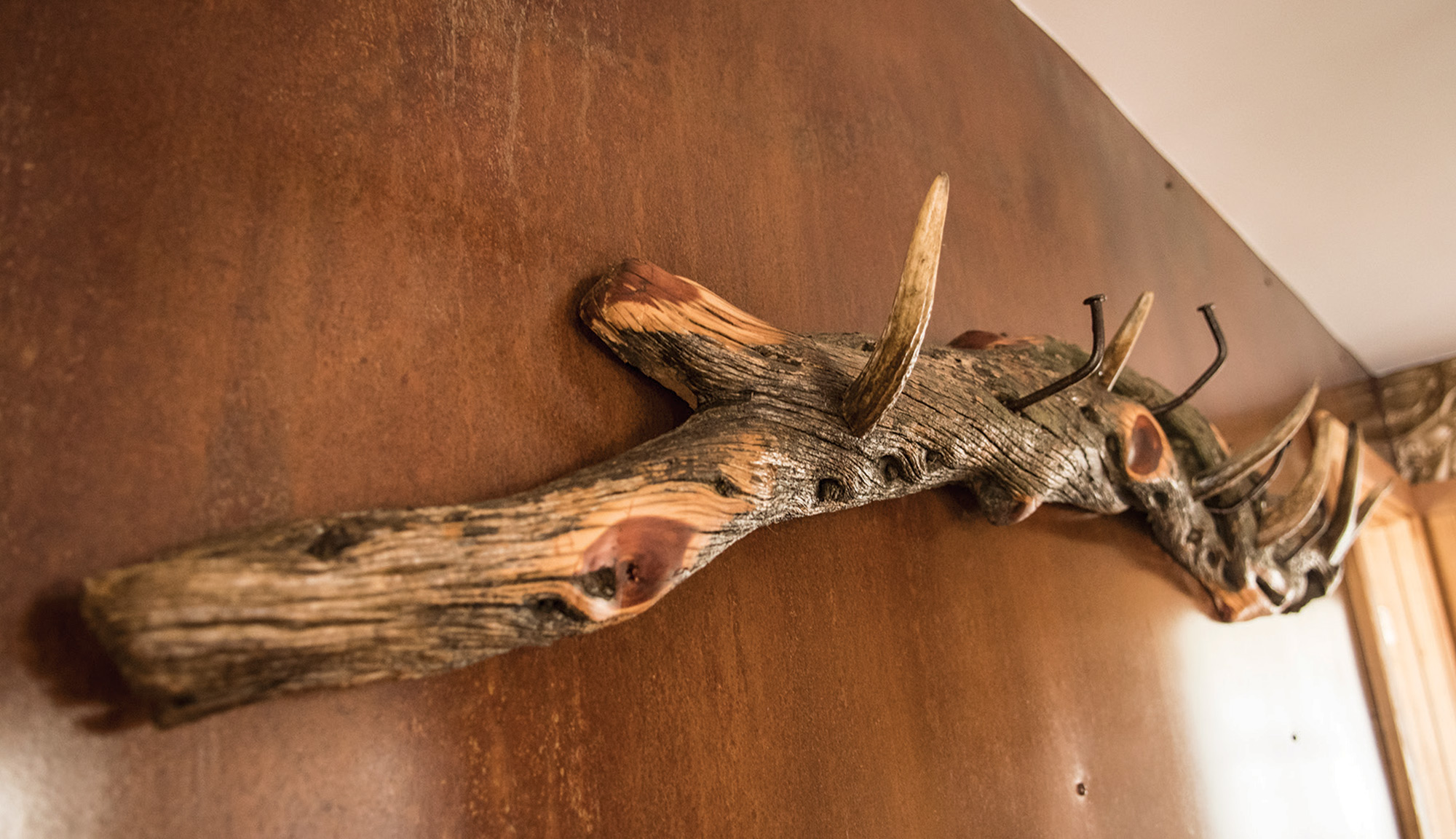 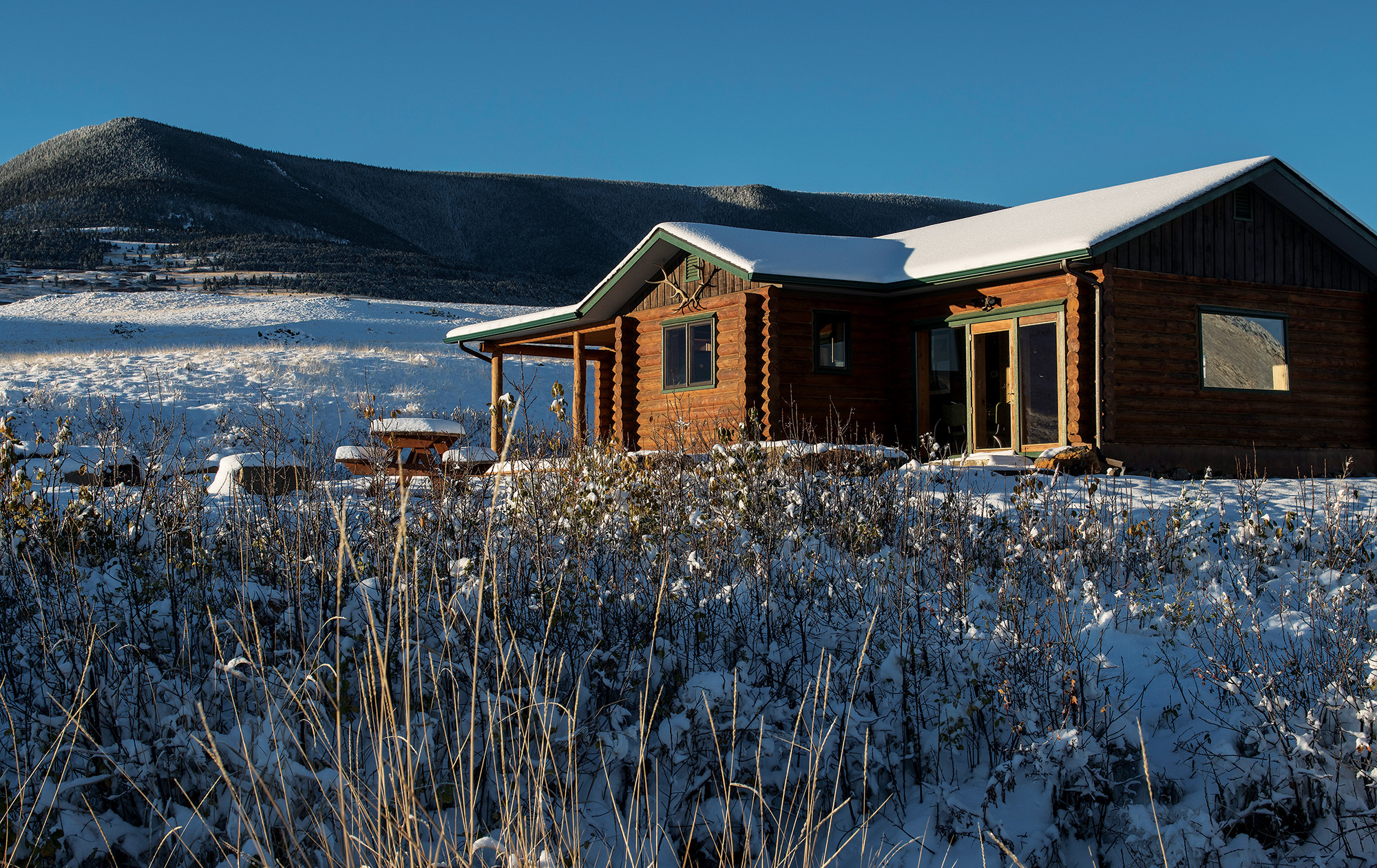 The exterior of Reece’s cabin gives little indication of the creativity displayed inside. 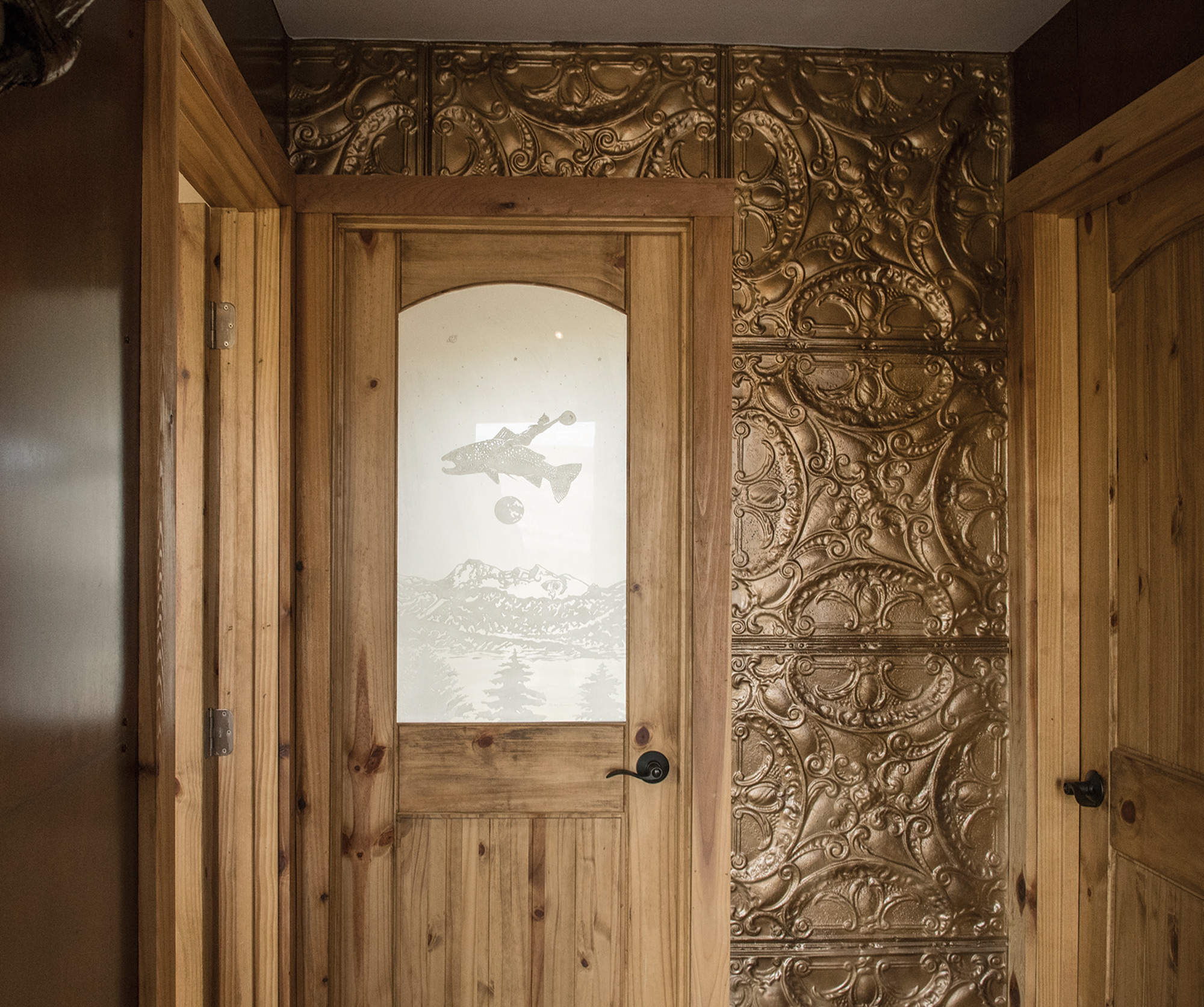 The inset glass in a bathroom door features an original etching by Reece.

Metalwork inspired by one of Parks Reece’s popular paintings adorns an outside railing. 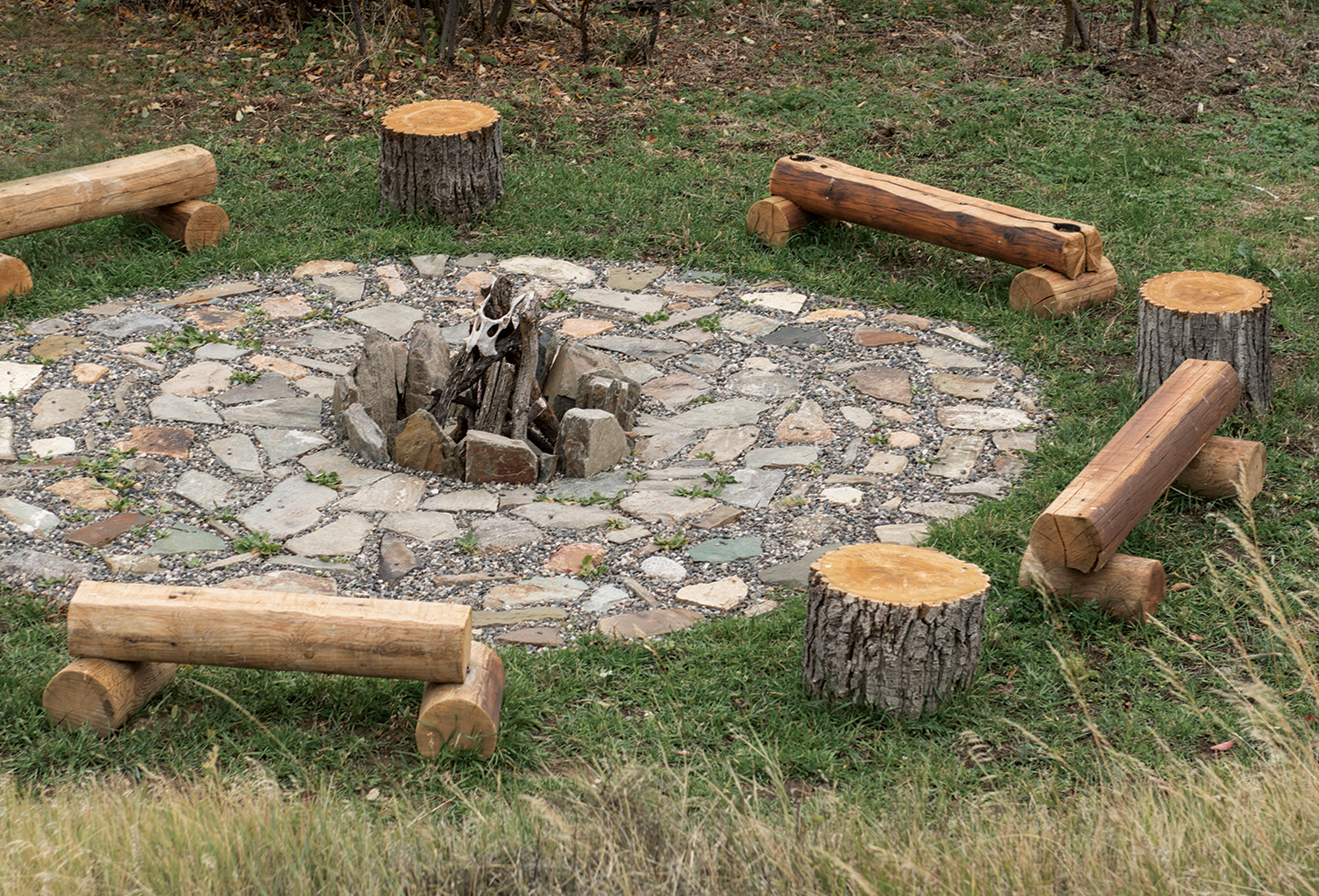 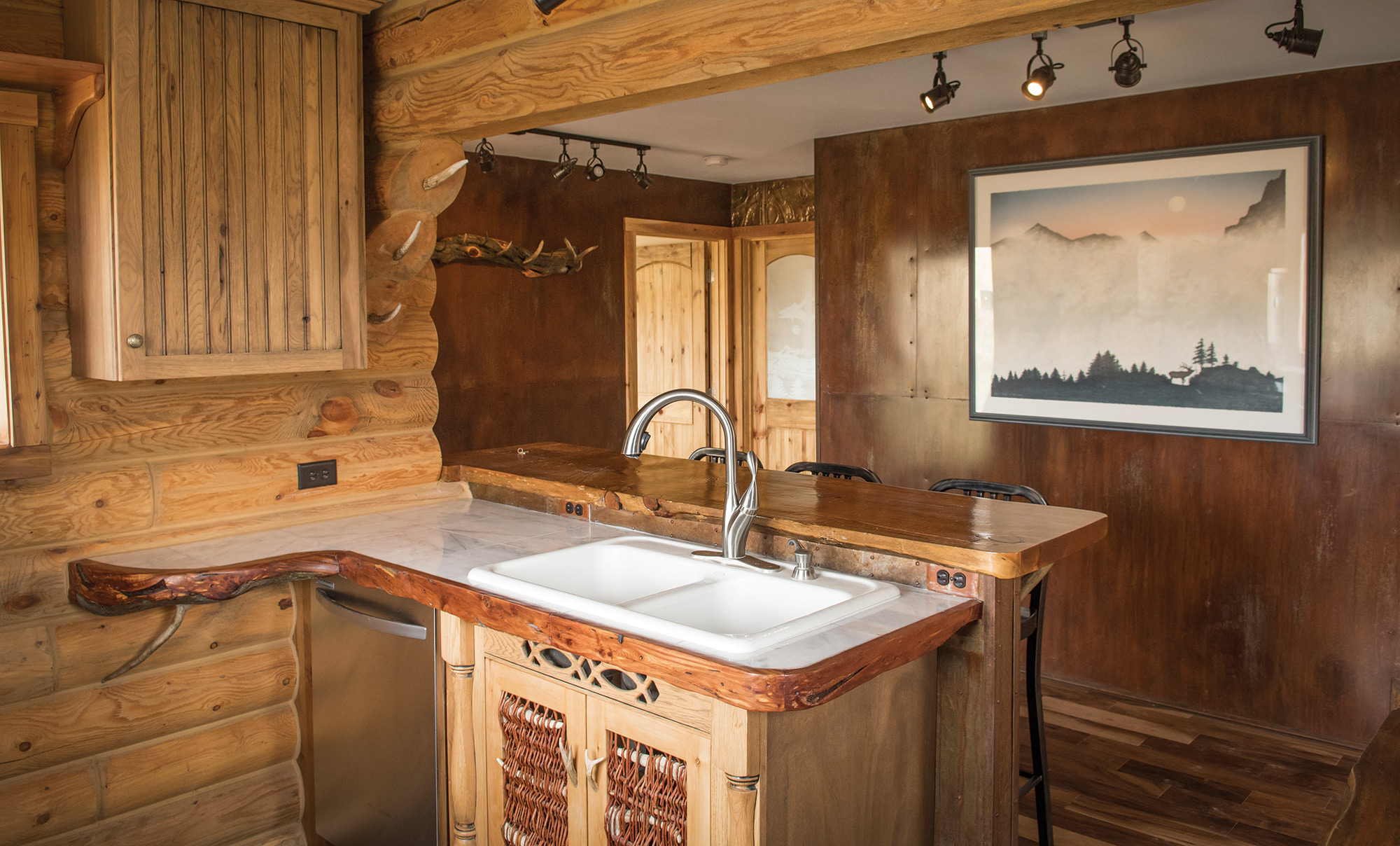 The kitchen features antlers, willows from nearby Miner Creek, and marble countertops. Hanging on the wall in the background is Reece’s lithograph, Call of the Wild, which is also the home’s name. 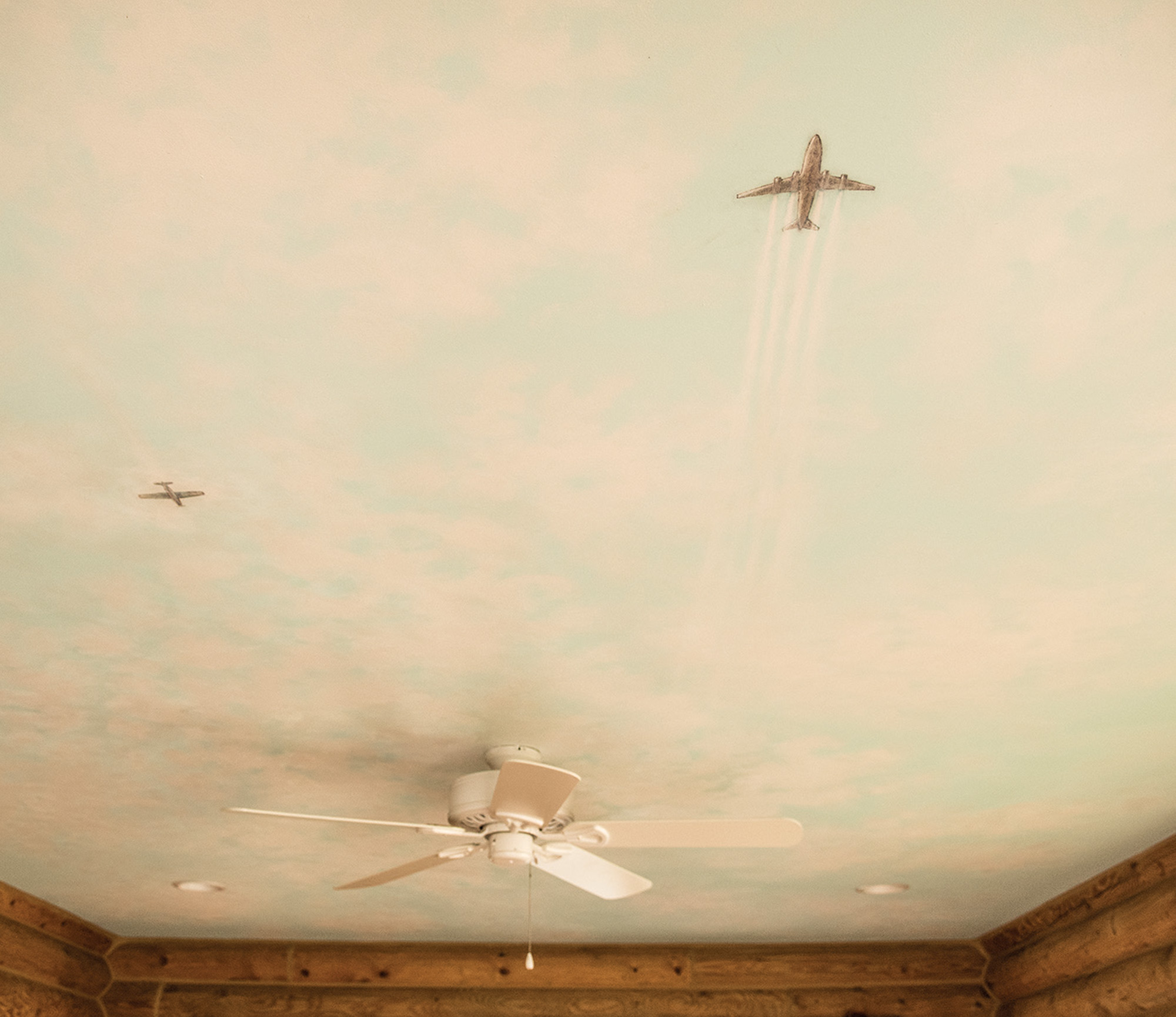 Using a laborious method known as “dry brushing,” Reece painted this ceiling mural with a sky scene. The old-fashioned propeller plane passing the modern airplane symbolizes the project’s motif: new and old meeting under one roof. 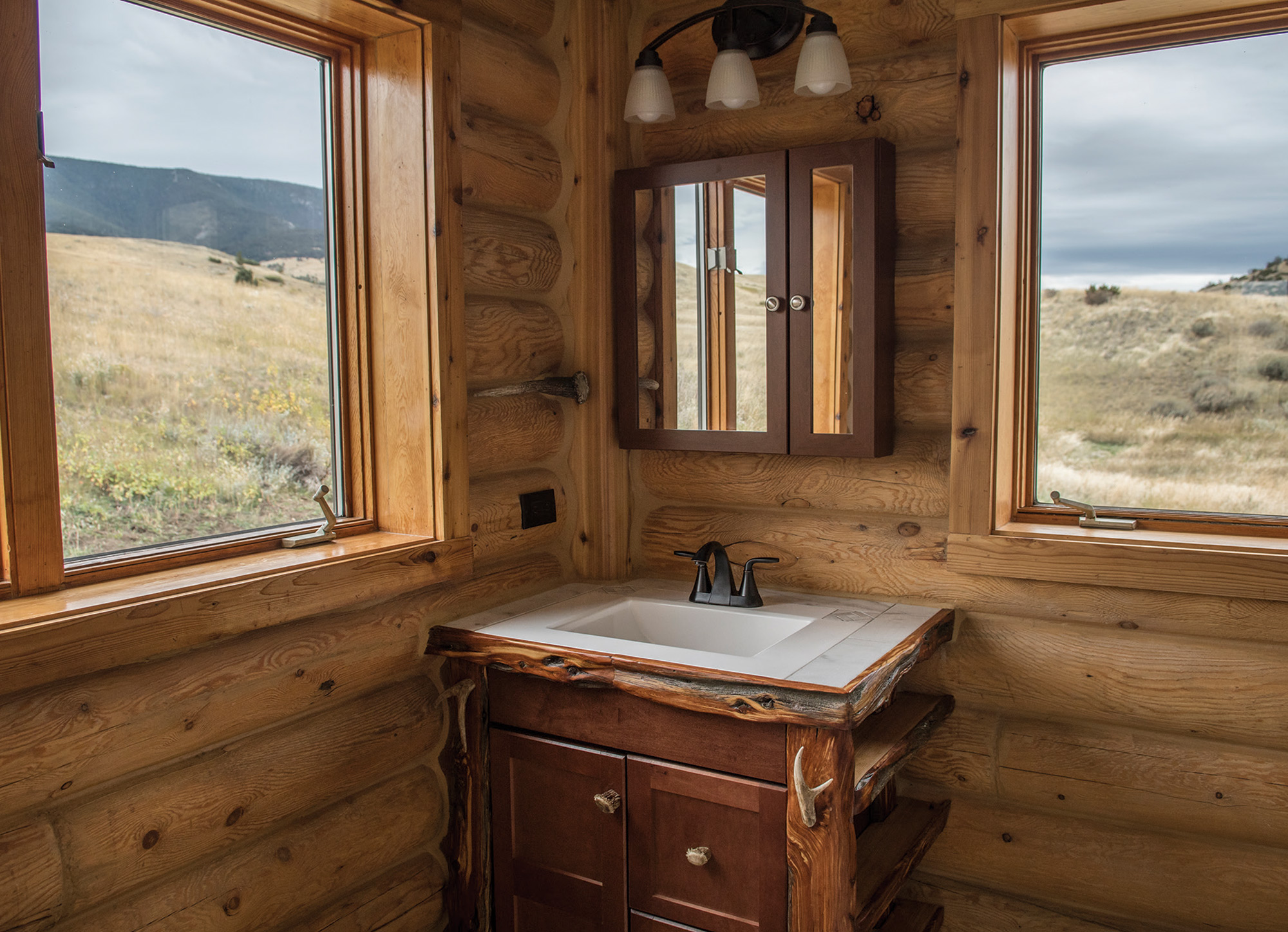 This bathroom, one of two, is well-lit with windows featuring mountain views. 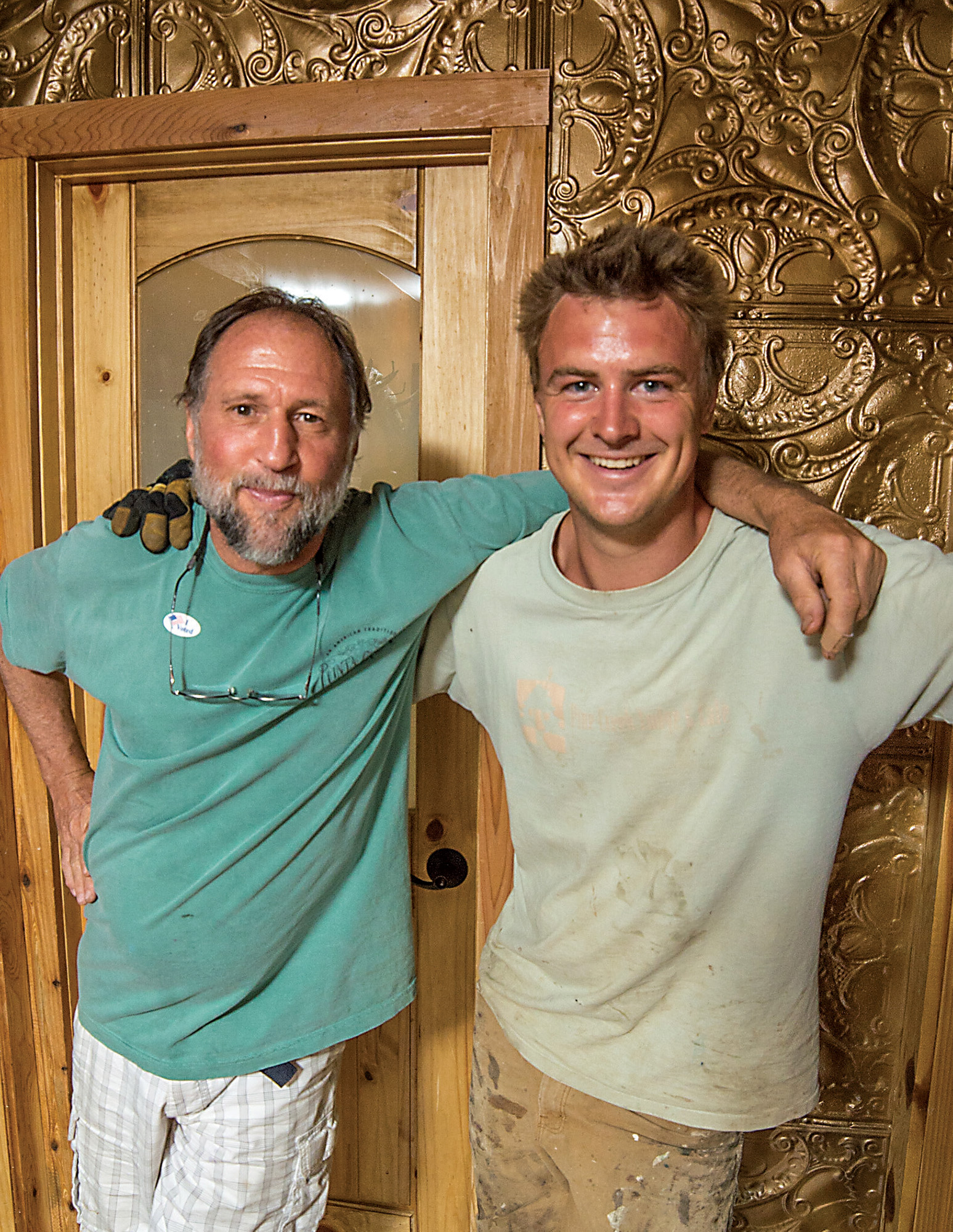 Reece stands with one of the project’s chief artisans, Willie Moore. Reece, Moore, and Pete Butler combined their imaginations and their various types of expertise to create a home that revels in the unexpected.