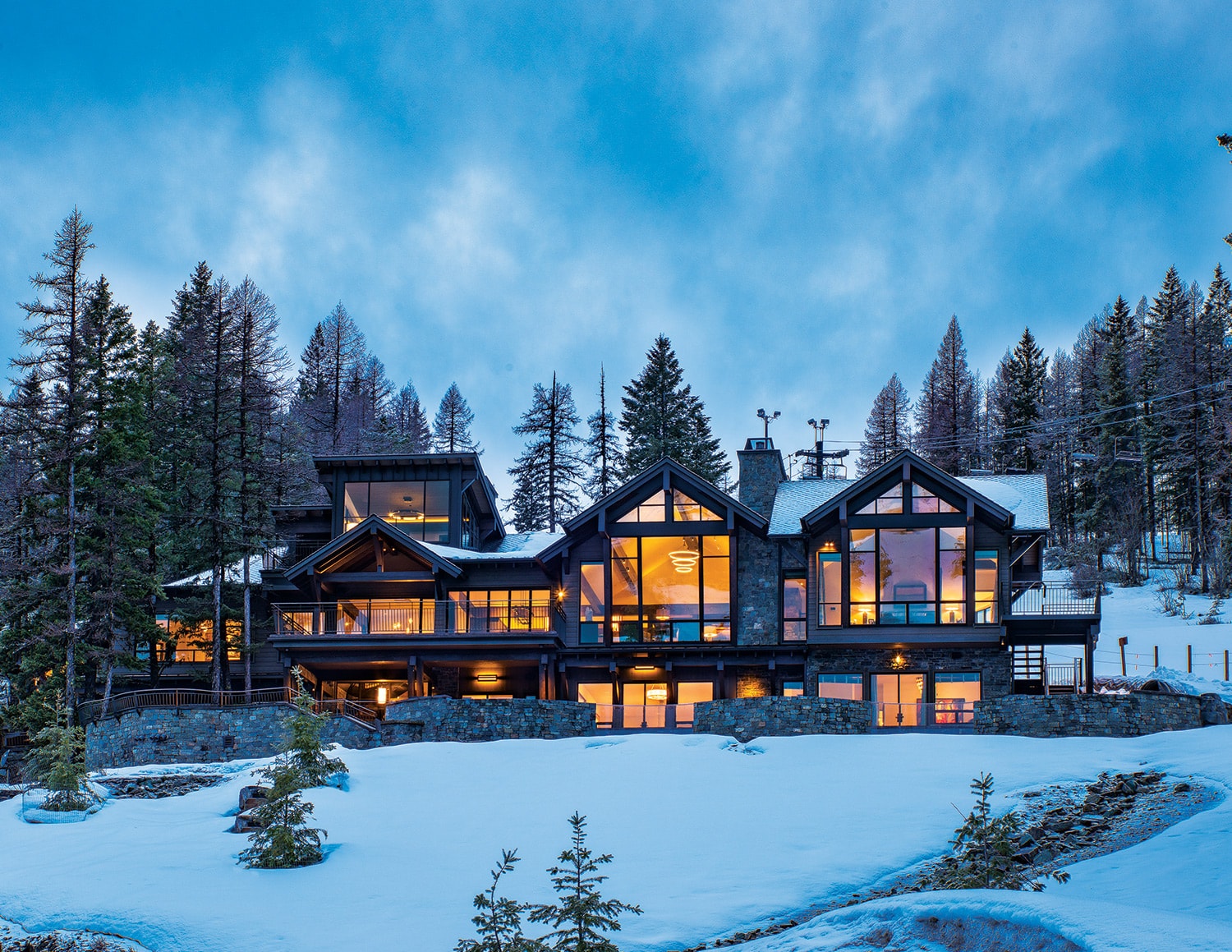 The home’s façade — a wall made predominantly of glass, tilted at a 15-degree angle — offers a dramatic and dynamic perspective of its surroundings.

AFTER YEARS OF FREQUENTING POPULAR SKI RESORTS throughout the Northwest, a family of outdoor adventurers and art enthusiasts set their sights on building a modern retreat in Whitefish, Montana. They called upon the collaborative local talents of Altius Design Group, Bigfork Builders, and Tate Interiors to create a one-of-a-kind family getaway that captures their active and artistic lifestyle. The result? A sophisticated, 10,000-square-foot, six-bedroom, six-bathroom, and three-powder room ski home that seamlessly blends the family’s passion for the outdoors with their extensive collection of contemporary Western art. 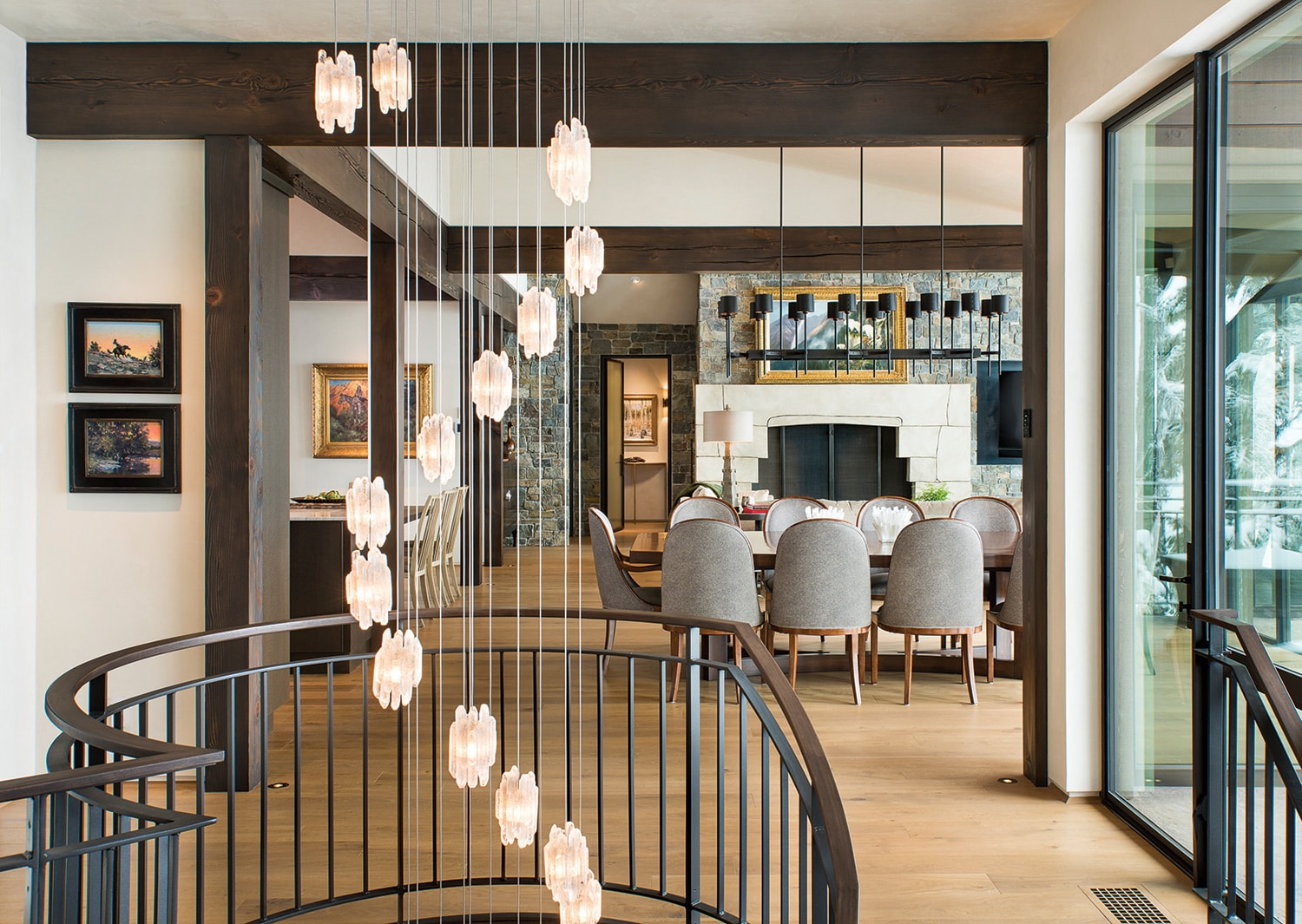 The home seamlessly blends the family’s love for the outdoors with their appreciation for contemporary Western artists, including, Michael Ome Untiedt.

“First and foremost, the family wanted a ski house,” said Rich Graves of Altius Design Group. “A certified ski instructor for almost 50 years, the father taught all five children to ski when they were 2 years old.” 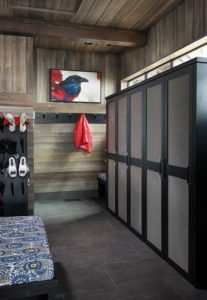 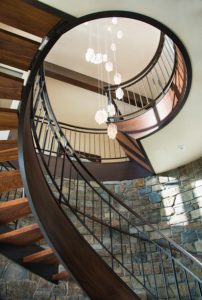 An elaborate spiral staircase at the entry is paired with a custom chandelier that is visible on both floors.

Built alongside a ski run at Whitefish Mountain Resort, the house is true to its location. The moment you turn into the driveway, there is no mistaking that you are on a ski hill surrounded by nature. From the old lift cable that is used as a guardrail along the driveway to a state-of-the-art ski gear room inside, the design touches mark the house as a ski home, through and through.

One of the home’s most striking elements is its façade — a wall made predominantly of glass, tilted at a 15-degree angle — which offers a dramatic and dynamic perspective of the surrounding mountains and landscape.

“The idea was to recreate that feeling you get standing at the top of a run, leaning against your ski boots, preparing to launch,” said Graves. “Not only is it a distinctive look, it also makes for really cool reflections from the street.”

Installing the angled glass windows required careful planning and creative construction methods, according to Andy Fischer of Bigfork Builders. “It’s not common to build your own windows on site,” he said. “But perhaps the biggest challenge was all of the work that had to happen just to get started. The initial site was steep and solid rock without much road frontage. The excavation process, breaking up the rock, creating the driveway just to reach the property — there was a lot of infrastructure that had to take place just to be able to break ground.” 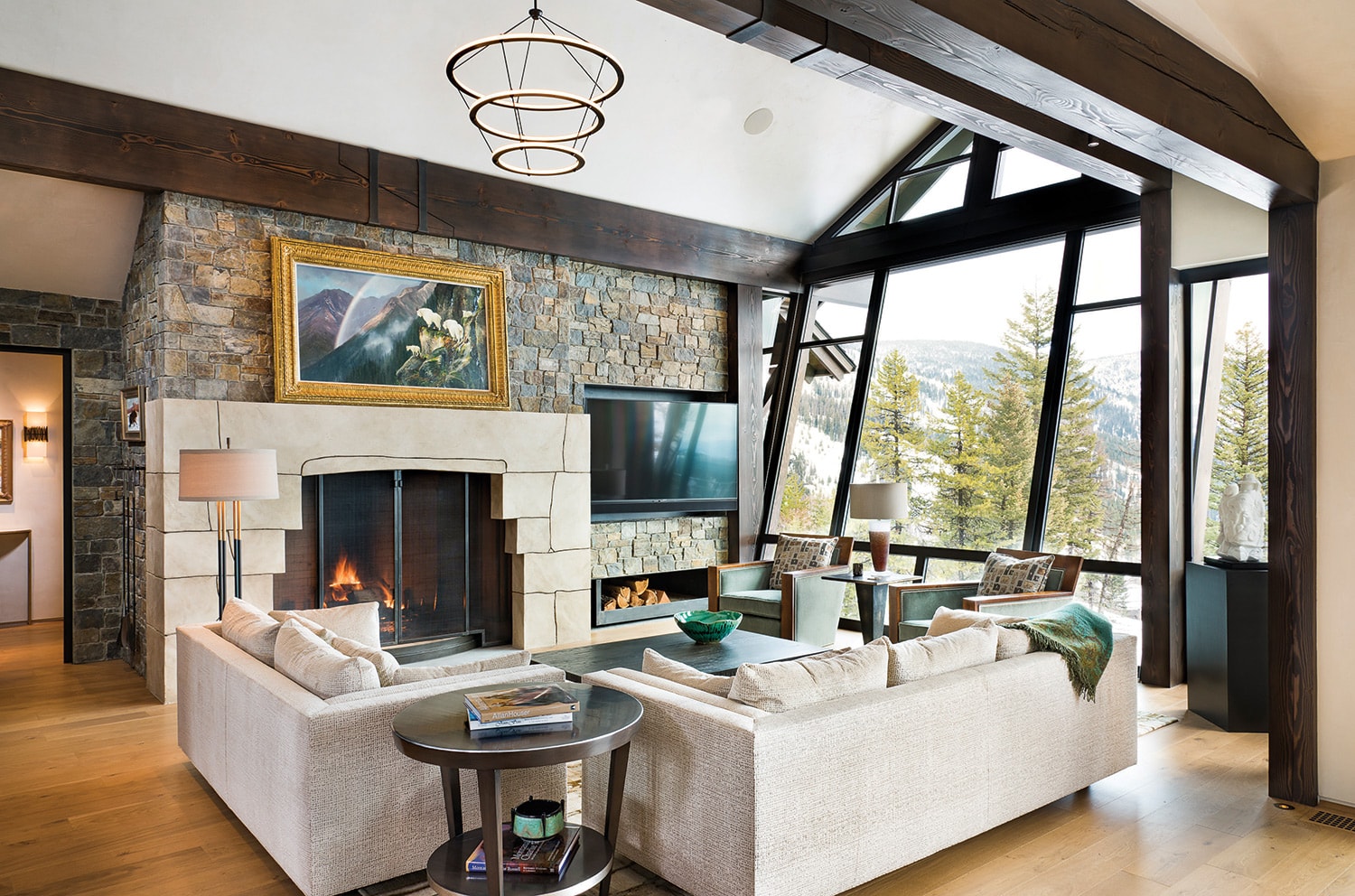 The fireplace in the great room echoes the iconic hearth of Lake McDonald Lodge.

“Add to it a harsh winter that year,” added Brad Reedstrom of Bigfork Builders. “The amount of site work involved was amazing — and not very typical.”

Initially, they planned to build on the two lots the owners had originally purchased. “Early in the process the owners decided to also buy the lot above them — and it’s a great thing they did. Not only did the site above afford better views and ski access, it was also needed just to get a driveway in,” explained Graves. 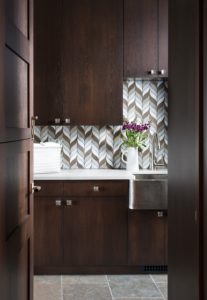 The mudroom is a striking blend of bold tile and sleek custom cabinetry.

The team worked with landscape architect Bruce Boody to design the site layout, fit the driveway into the landscape, and help integrate the house and terraces. Foundation work was performed by Chris Schlegel of DCI Engineers (formerly BCE Structural).

Peacockfeathered wallpaper adds a sophisticated touch to the powder room.

Inside the home, the walls commemorate and celebrate perspectives of the Old West. Not a single surface is left blank, and they are a colorful display of who’s who in contemporary Western art: Oleg Stavrowsky, Kevin Red Star, Nancy Dunlop Cawdrey, Charles Fritz. Add to that sculptures by renowned artists including Doug Hyde, Allan Houser, Michael Naranjo, Tim Cherry, and more.

Conceptually, a ski home might not seem like an obvious fit for such artistic treasures, but it doesn’t take more than a few minutes of exploring the home and speaking with the owners to see a natural bond. The southern-based family’s affinity for Western art is profound and deep-rooted — they have been collecting for more than 12 years.

“I’m from Oklahoma and have always felt a strong connection to Western scenes and their stories,” said the owner.

“While we spent five years curating art for this home, only a few of the pieces had predetermined locations. So installation of the art was an elaborate, creative process orchestrated by Jodi,” she said, referring to Jodi Shirkey of Tate Interiors.

Stylized while still personal, every room was thoughtfully arranged and furnished, ensuring that comfort was a primary consideration. “We chose a clean aesthetic throughout the house as we did not want the furnishings to compete with the art,” Shirkey said. “We played up and repeated design elements, as well as brought in different textures and natural materials to complement the family’s love for geology, rocks, and crystals. There is very little in this house that isn’t custom or carefully considered.”

Custom cabinets and an oversized banquet/kitchen table were fabricated by Padgham Woodworking.

Small details, such as leather accents in the drapes and embossed leather headboards in the bedroom, pick up on the Western elements without going overboard. Custom cabinets throughout the house and an oversized banquet/kitchen table were fabricated by Padgham Woodworking. 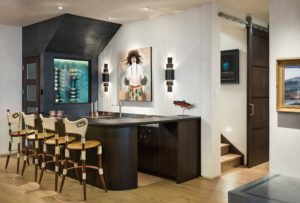 A painting by Kevin Red Star livens up the bar area.

As the family’s needs and interests evolved, so did the project. With the installation of an elevator came the idea to build an observatory, a “secret” stop on the elevator that opens up to stunning, 360-degree views of Flathead Valley, Glacier National Park, and the surrounding mountain ranges. 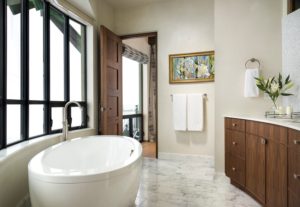 In his-and-her master bathrooms, the team chose to play up smooth arcs in the walls and windows, resulting in a curved tub and fixtures. A Nancy Dunlop Cawdrey painting hangs by the doorway.

In creating the “his and her” master bathrooms, the team chose to play up smooth arcs in the wall and windows that Graves conceived, resulting in a curved tub and fixtures. An elaborate spiral staircase at the entry is paired with a custom chandelier that can be seen on both floors. The fireplace in the great room intentionally echoes the iconic 100-plus-year-old hearth of Lake McDonald Lodge, one of the family’s favorite places.

Overlooking the ski run sits a two-lane, 25-yard-long lap pool concealed under a deck. At the flick of a switch, the deck descends into the bottom of the pool. Even the acrylic railing disappears to create an infinity pool effect.

“The owners had an amazing vision and a great imagination — and they let us use our imagination,” said Graves. “Someone would plant the seed and we would work together to make it grow. It was a fun and exciting project.”

Weekly meetings provided the opportunity to discuss all the challenges and options, then they worked collaboratively to figure things out. 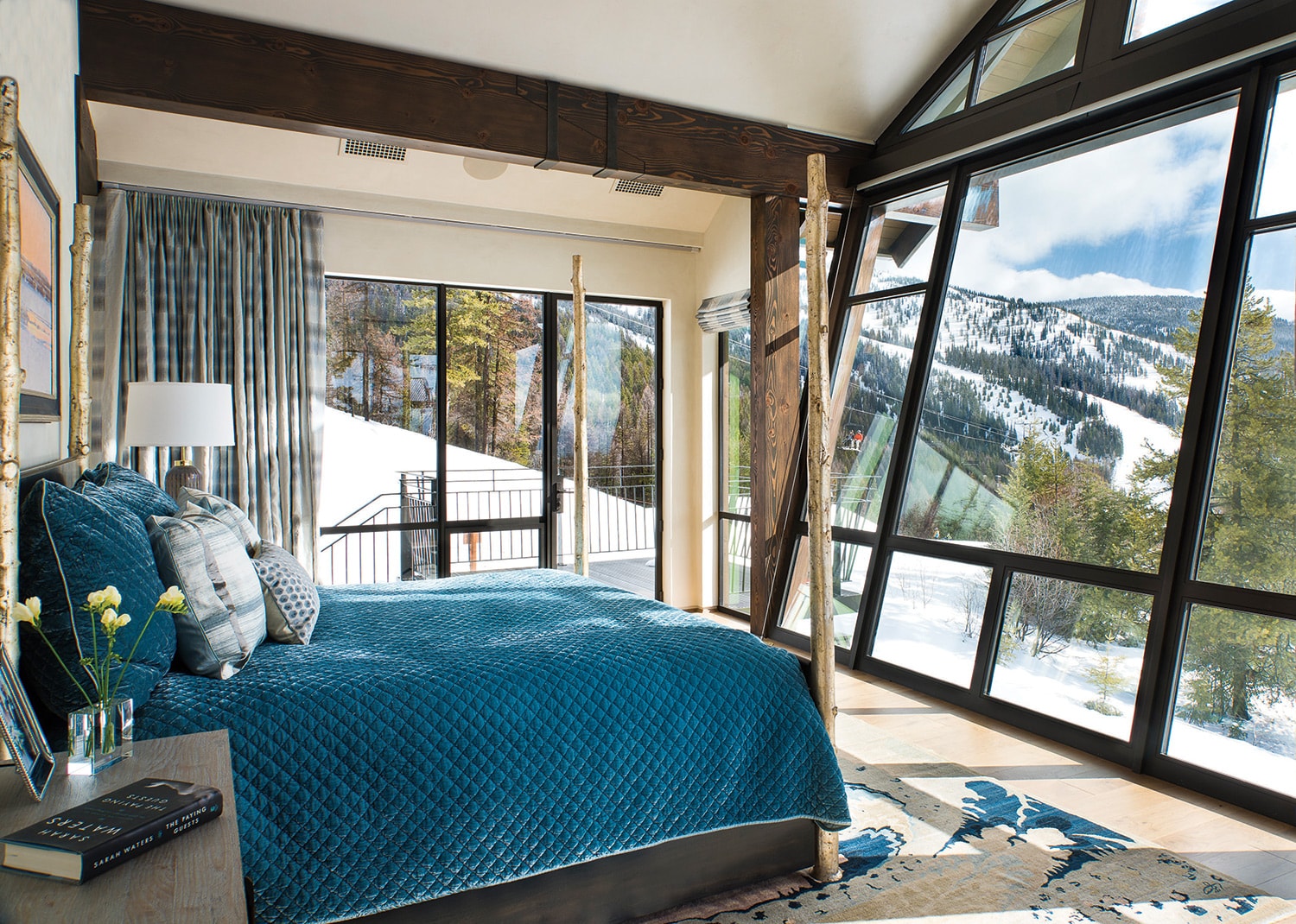 Tilted windows in the master bedroom offer a dramatic and dynamic perspective of the mountains.

“It was incredible to work on this project — as well as with this team,” said Shirkey. “The client trusted in the team and believed in the decisions we made. They were certainly part of the process, but they really let us go.”

Reedstrom concurred. “All possibilities were considered and explored,” he said. “It was fun because the owners were engaged and interested in every aspect of the home — and they recognized and respected what it takes to make it awesome.”

The home was finished just in time to host a wedding for the owners’ daughter. Said Reedstrom, “Being able to watch the family use and enjoy the home? It doesn’t get more rewarding than that.”