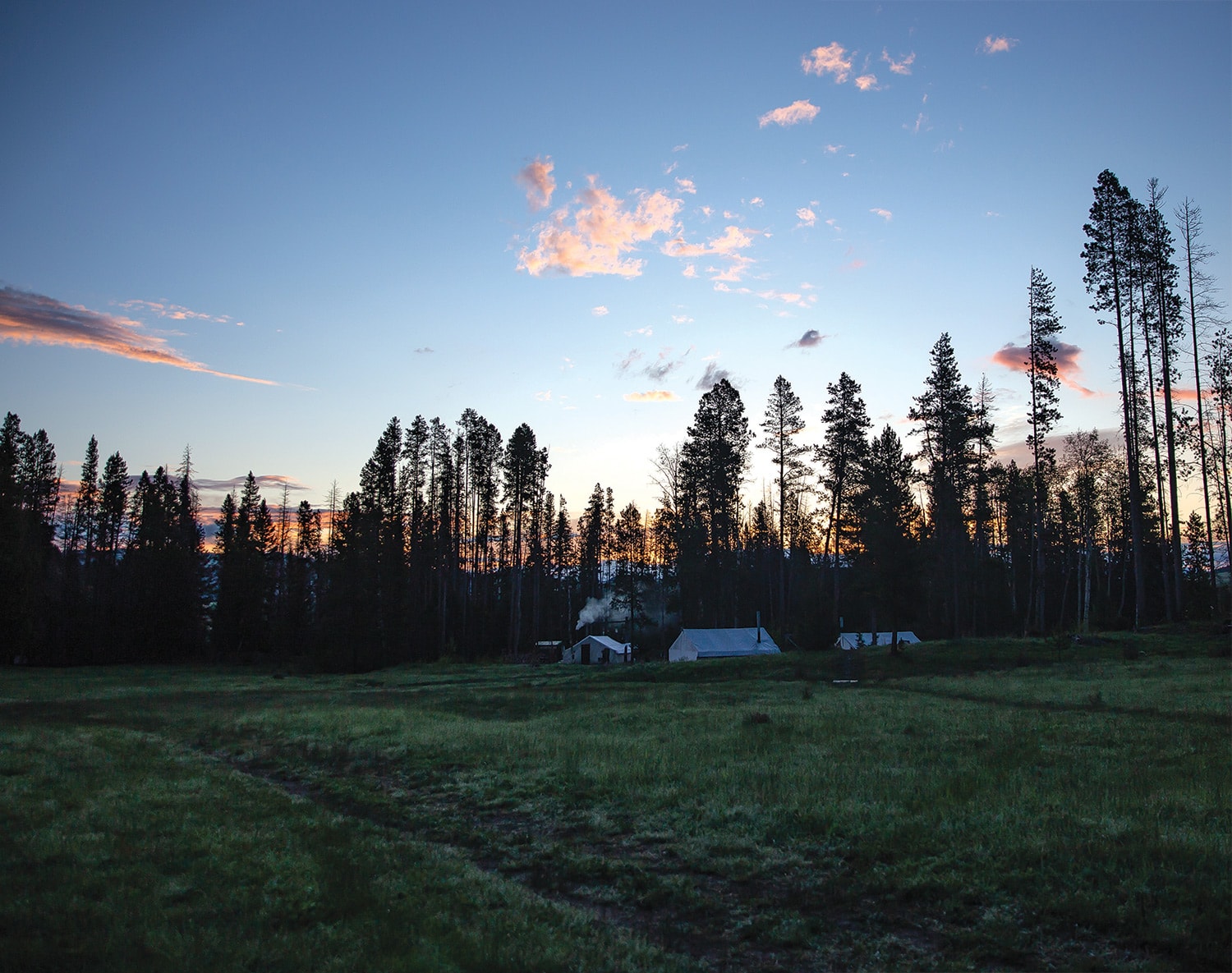 What guide schools lack in luxury, they make up for in sunrises. Photo by Allen Morris Jones

THE ALARM CHIMES AT 6 a.m. I hit snooze for half an hour before I’m finally roused from my cot by the sound of hooves. The metal roof of the classroom, my makeshift bedroom, amplifies the soft rain. Looking out the window, I see men in cowboy hats and slickers rounding up horses and mules that grazed all night in a nearby pasture. All the stock needs to be in the corral by 7:30 a.m. 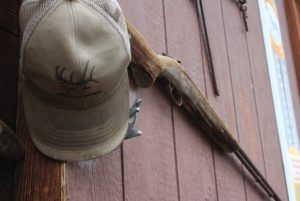 The six cowboys are from different locales, including Pennsylvania, Missouri, Minnesota, Texas, and Georgia, and one from New Zealand. They are all here, just west of Philipsburg, Montana, standing in the rain, covered in mud and a bit of manure, to become hunting guides. Today, they will learn how to attach an elk carcass to a mule; tomorrow’s lesson is basic veterinary care for their stock. Nearly every day for six weeks they will ride horses, even if only for a mile or two. 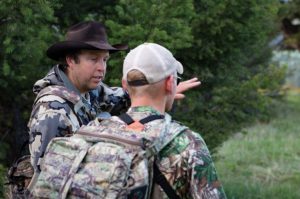 On my way to the cook tent, the rain comes in waves. Inside, LeRee Hensen is busy setting out bacon, eggs over easy, and caramel rolls. Cowboy coffee percolates on the wood stove. Camp cook, guide, and proud owner of a dozen black and tan hounds, LeRee is one half of Royal Tine Outfitting and Guide School. The other half is her husband Cody Hensen, who takes on the outfitter, guide, and lead instructor roles.

In the early 1960s, Cody’s grandfather bought land in the hills adjacent to what is now the Anaconda-Pintler Wilderness in Western Montana. Cody’s father worked as the cow boss in charge of the stock on the Montana State Prison ranch in Deer Lodge. As a kid, Cody wasn’t much into cows, but he loved horses, the woods, and especially the chunk of ground that his grandfather owned, where he and LeRee now run their outfitting school.

Cody graduated from the University of Montana with a business degree, and opened Royal Tine in 1994. At the time, he was still working as a packer and guide for more than a dozen other outfits in order to find new ways to improve his own business. It was in Missoula where he met LeRee, who was there learning small engine repair and welding. “I was going to work on the Alaska pipeline,” she says, “but one thing led to another.” They were married in 1996.

After breakfast, the students each grab a mule from the corral and tie them to the hitch outside the classroom where I spent the night. Everyone takes a seat inside as Cody opens a binder. On a dry erase board he goes over the differences between decker and sawbuck saddles, and how to tie diamond hitches to each. 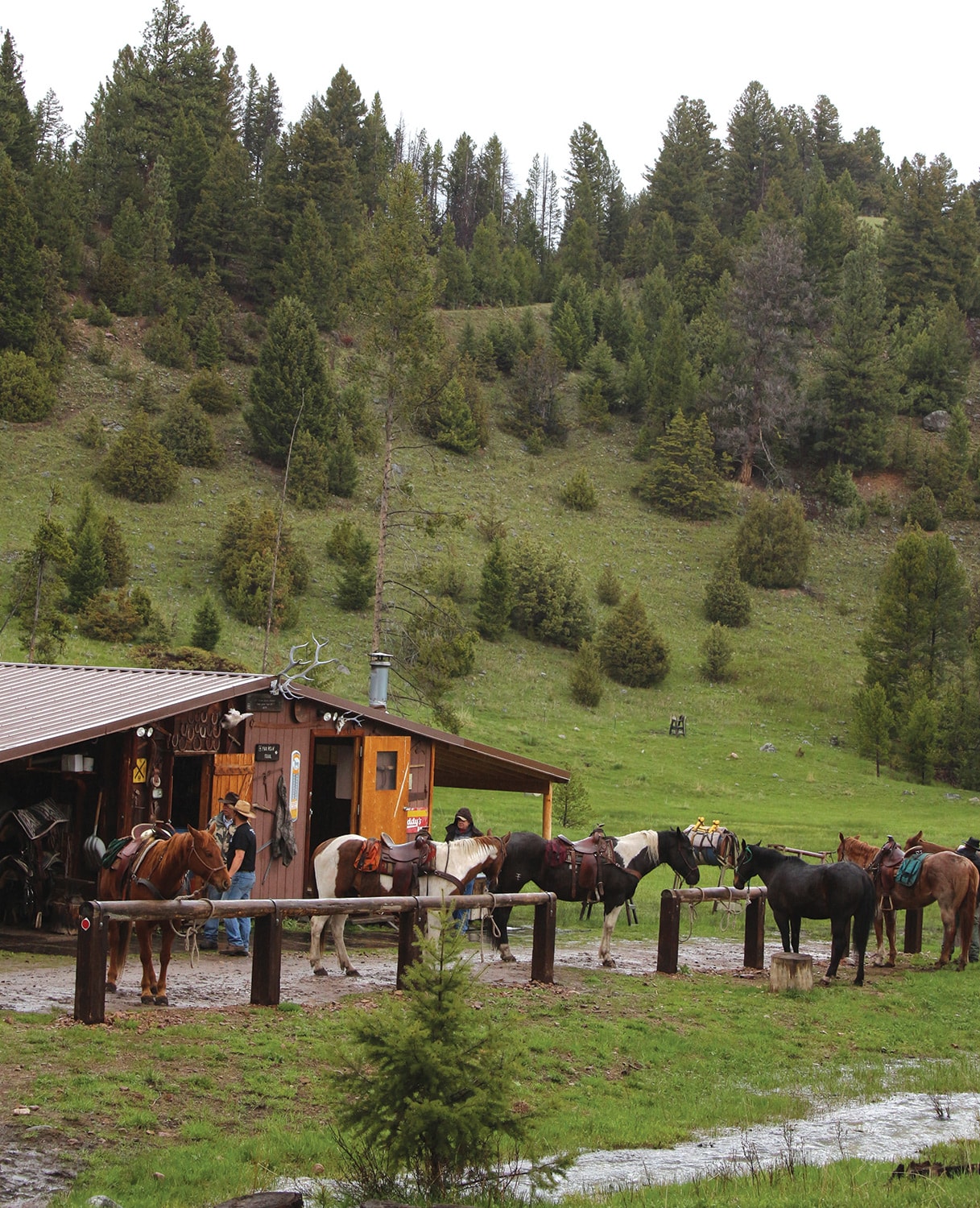 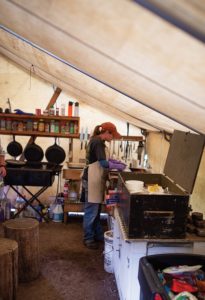 An experienced camp chef, LeRee Hensen works in the cook tent to keep bellies warm and full. • Cody, middle, takes guides out on a mock elk hunt to round out the course.

Some of the students have no experience around stock, which is not necessarily an issue as long as they pay attention. I look around as they all take notes. Thirty minutes later, we’re all standing in the rain. Half the group goes with Cody to learn how to pack hay bales on a decker, while the other half goes with Shaun “Bird” Jensen, a former student-turned-instructor with a turkey hunting obsession — hence the nickname. Bird is teaching them how to pack elk quarters and a rack on a mule. “Racks need to be tight,” he explains. “If they get loose, something’s gonna bleed. 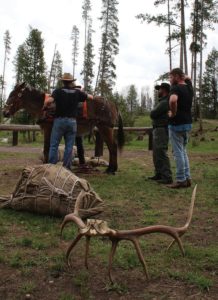 On Saturday, there will be a midterm exam, and everyone has to pass. Students typically get half of Sunday and all of Monday off, allowing them time to do laundry and, perhaps, enjoy a beer in the quaint town of Philipsburg. Cody learned long ago that sending a troop of young men into town on a Saturday night wasn’t the best idea, especially since alcohol is forbidden on school premises — and that’s just one rule. Cody explains that he started with a short list of rules, but after adding to it every year, it’s now quite lengthy. Free time can be spent fishing or hiking, but much of it is spent practicing knots or catching up on sleep.

Outfitting in Montana is big business, and it’s growing. In 2017, non-residents spent roughly $374 million on outfitters and guides, which makes up 11 percent of the total non-resident spending. This is up from $268 million in 2015, according to a report from the Institute for Tourism and Recreation Research. Tourists looking to fish and hunt in Montana often want someone to show them the way, so they look to a guide. In 2015, there were 550 active outfitters and 1,600 seasonal guides. Today, there are 749 outfitters and 1,800 licensed guides.

Montana is home to about two dozen outfitting and guide schools, but not all are created equal, according to Cody. “A lot of time guide schools are going to tell you what you want to hear,” he says. “You have to ask for references. Our references really make it for us. I’m more interested in you knowing your stuff than whether you like me or not.”

Royal Tine’s students are here mainly because of the school’s reputation. The school’s more than 600 alumni have helped spread the word, along with social media. Austin Wethington, a 29-year-old student originally from Georgia, had some experience working for an outfitter before he enrolled. He knew about stock and packing, but he wanted to learn more about guiding hunters and finding game, and when asking around, people kept telling him to check out Royal Tine.

To pay the $4,500 tuition, which includes room and board, Wethington used the GI Bill. For five years, he worked as an engineer in the Marine Corps, serving in Afghanistan. There, he used goats, not mules, to pack gear. Now, he has a job lined up guiding for Lazy J Bar O Outfitters based in Big Timber, Montana, and he’ll spend most of his time deep in the Bob Marshall Wilderness. “The military guys do really well,” says Cody. “They’re used to work and being dirty.”

Most Royal Tine students are in their early 20s, and all are male. Some women do inquire, but none have ever taken the course. “For a lot of folks, college doesn’t appeal to them,” says Cody. “It’s really like a trade school. It’s up to the students to be motivated.”

Having 100 percent job placement for their graduates is something the Hensens take pride in. “There are way more jobs to fill than guides out there. Outfitters are looking for an honest, hard worker who doesn’t need to be told what to do. But,” Cody says with a grin, “all the outfitters ask us to find them neutered guides who are allergic to alcohol.” 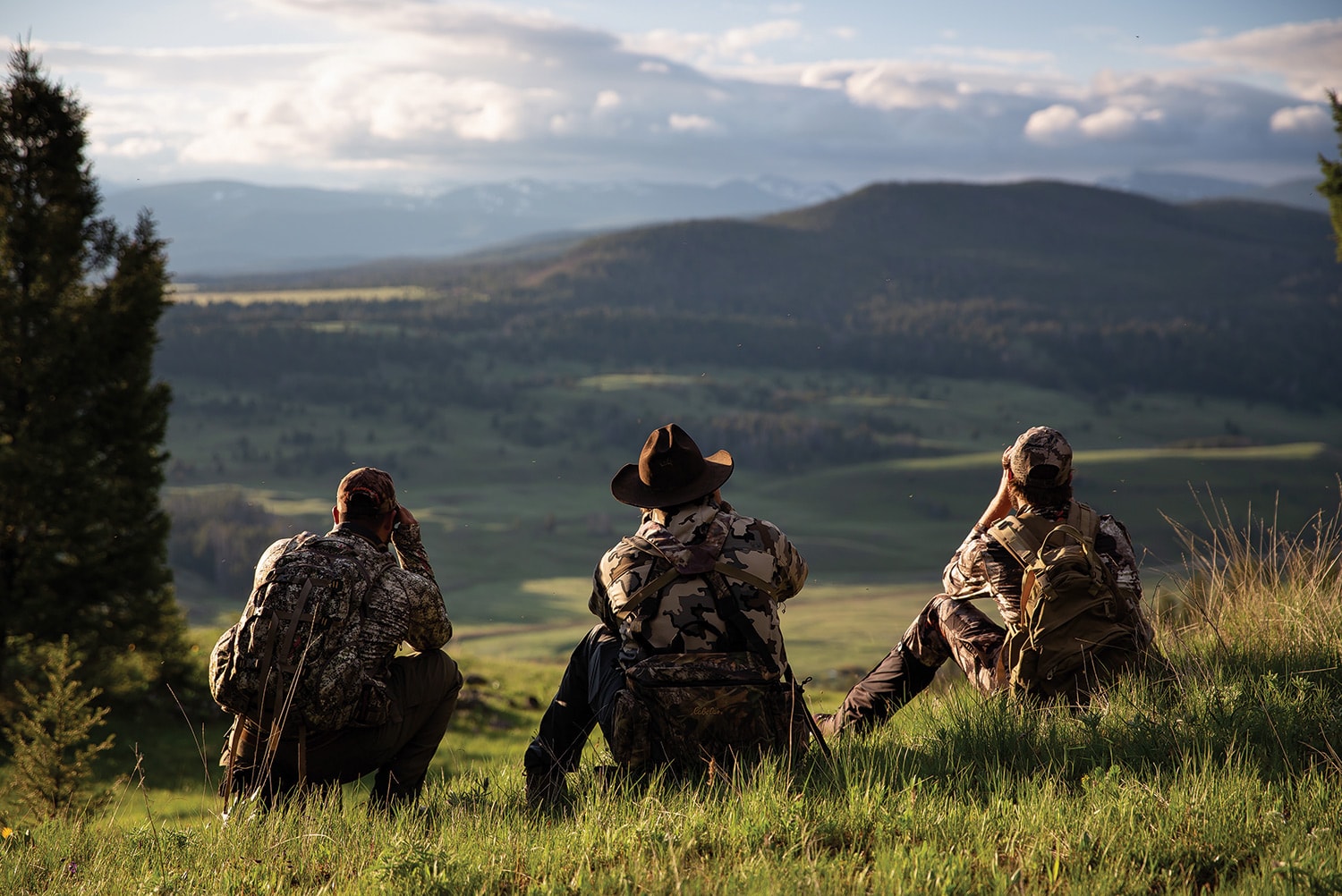 For the fall hunting season, guides make an average of $100 to $300 per day, plus a 10 to 15 percent tip. It’s hard work and long hours, but the students agree that you really can’t beat the views from the office. 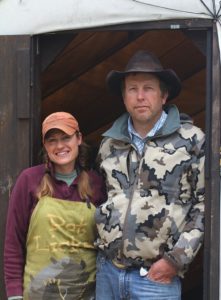 Married since 1996, Cody and LeRee Hensen have been working together as owners of Royal Tine Outfitters and Guide School ever since. Photo by PJ Del Homme

A camp full of testosterone-laden young men could make an intriguing setting for a documentary. In fact, producers from a reality show once approached the Hensens about 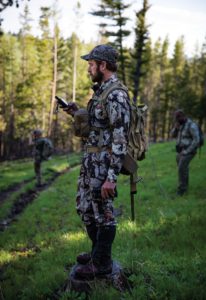 making one. They declined. “They wanted to create a bunch of drama, and we have no interest in that,” says LeRee. “It [would have] made the school look like a big joke.”

There are two downsides to the guide school business that Cody and LeRee adamantly agree on. “I’d rather stick an ice pick in my eye than pick new stock,” LeRee says. For both the school and their own outfitting and trail-riding business, they need incredibly patient and well-trained horses and mules to deal with those who have little or no livestock experience. “Everybody and their dog has a crazy horse in their backyard that they want to sell you,” says LeRee.

The other downside is the shopping. Every couple of weeks the couple will drive to Missoula and spend around $2,000 on food. “By the time we get to Drummond [30 minutes from camp], we’re already in a foul mood,” LeRee says.

At dinner that night, everyone washes up outside and takes off their cowboy hats. On the menu is elk meatloaf, mashed potatoes, and salad with bacon vinaigrette, and everything is cooked from scratch.

An experienced camp cook, LeRee also teaches a two-week camp cooking course and a four-day Dutch-oven course. Many of her students are older men who no longer hunt but want to be in on the camp experience. Being the cook is a great way to still get to hear stories around the campfire, she explains. But it’s not only for the older set; Wethington plans to come next year for the cooking school as well.

When it’s time for me to leave, the sun comes out for just a spell. The students still have another five weeks of sleeping in wall tents and working outside, rain or shine. In my rearview mirror, I watch smoke rise from the wood stoves, flattening into the damp air. I feel a pang of envy knowing these guys will spend their summer and fall seasons fighting mosquitoes, horseflies, and stubborn stock. They will guide not-so-horse-savvy visitors from all over the world into Montana’s most beautiful places and love (nearly) every minute of it.