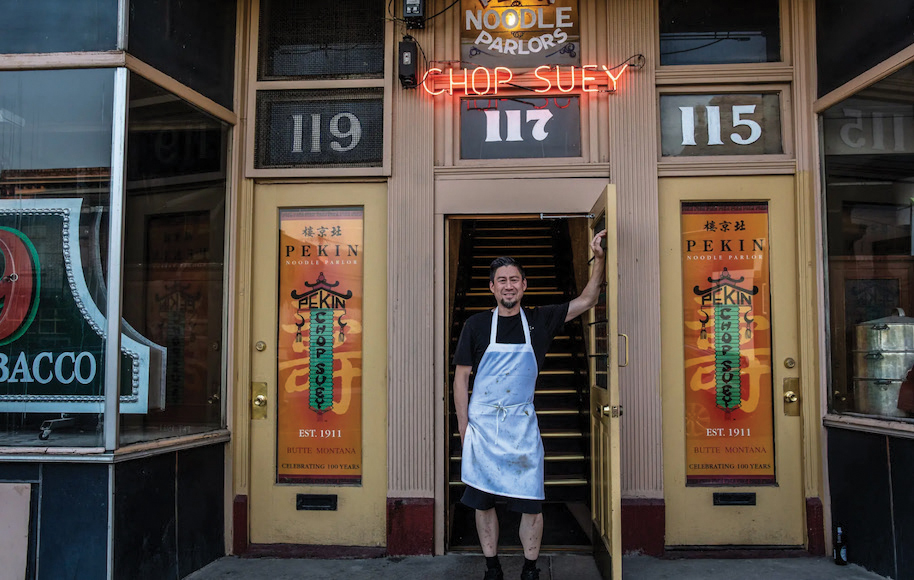 Fifth generation owner Jerry Tam proudly serves up some of the very same popular Chinese dishes that graced the original Pekin Noodle Parlor menu over a century ago.

23 Nov Round Up: The Pekin Noodle Parlor

There are more Chinese restaurants in America than all of the McDonald’s, Burger Kings, Wendy’s, and KFCs combined; at last count, more than 50,000. Almost all of them serve a familiar roster of dishes created by Chinese immigrants nearly two centuries ago, many of them created specifically to please the American palate. And they clearly nailed it, making Chinese-American food a staple in the U.S. 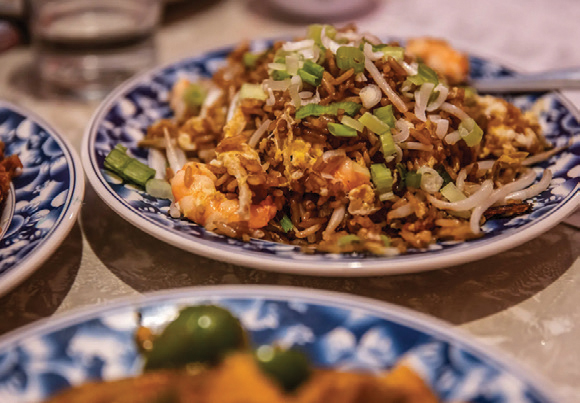 A favorite among loyal customers, chop suey — a dish combining a protein, vegetables, and savory sauces — is now available in 14 different varieties at the Parlor.

It was the California Gold Rush of 1849 that originally attracted thousands of Chinese men to the West. While they were hoping to strike it rich, hundreds of others set up stores and restaurants to keep the miners supplied and fed. Soon, non-Chinese miners began dining at these restaurants — identified by triangular yellow flags out front — which were known to serve large portions at low prices.

A favorite dish at the time was chop suey: a combination of stir-fried vegetables and beef, pork, or chicken, all covered in a thick brown sauce. While some claim it was invented in the U.S., chop suey was just exotic enough to be exciting — with bamboo shoots and water chestnuts — but due to the texture of the gravy-like sauce, it was also familiar, reminiscent of American beef stew. Others insist it is a modification of a dish made in China that featured entrails and offal among the vegetables. What is certain is that chop suey ignited America’s love affair with Chinese food.

When the Pekin Noodle Parlor opened in Butte, Montana in 1911, it proudly featured chop suey and continues to serve the popular dish today, more than 60 years after changing tastes and questionable origins fueled its disappearance from most other Chinese restaurant menus. Jerry Tam is the fifth-generation member of his family to run the Pekin, which he claims is the oldest Chinese restaurant in America. “It’s one of a kind, one of the most special places on Earth,” he says.

As Tam proudly reminisces, “We are truly an original chop suey house.” The neon sign that juts out from the second story of the weathered brick building that houses the establishment features a stack of big red letters that reads chop suey from top to bottom. The menu lists 14 different kinds of chop suey, including versions with pork, chicken, shrimp, almonds, and more. “It’s a combination of whatever’s left over in vegetables, onions, greens, celery, or bean sprouts,” Tam says. “And you could put bok choy in it, you can put anything you want in it. It’s just tiny bits of vegetables all mixed together and prepared in its own vegetable gravy.”

Large batches are made several times a night, stir-fried in sizzling woks that are tarnished by decades of use; one is so old, it’s almost completely blackened. The chop suey can also be ladled onto a pile of crispy noodles to make chow mein.

The rest of the Pekin Parlor menu is made up of Chinese-American classics, most of which were developed over the decades after chop suey took the country by storm and prompted restaurateurs to create more dishes — many of them sweet or crunchy — to appeal to American tastes.

Excerpted from Food Americana: The Remarkable People and Incredible Stories Behind America’s Favorite Dishes, written by David Page and released in May 2021, by Mango Publishing Group.