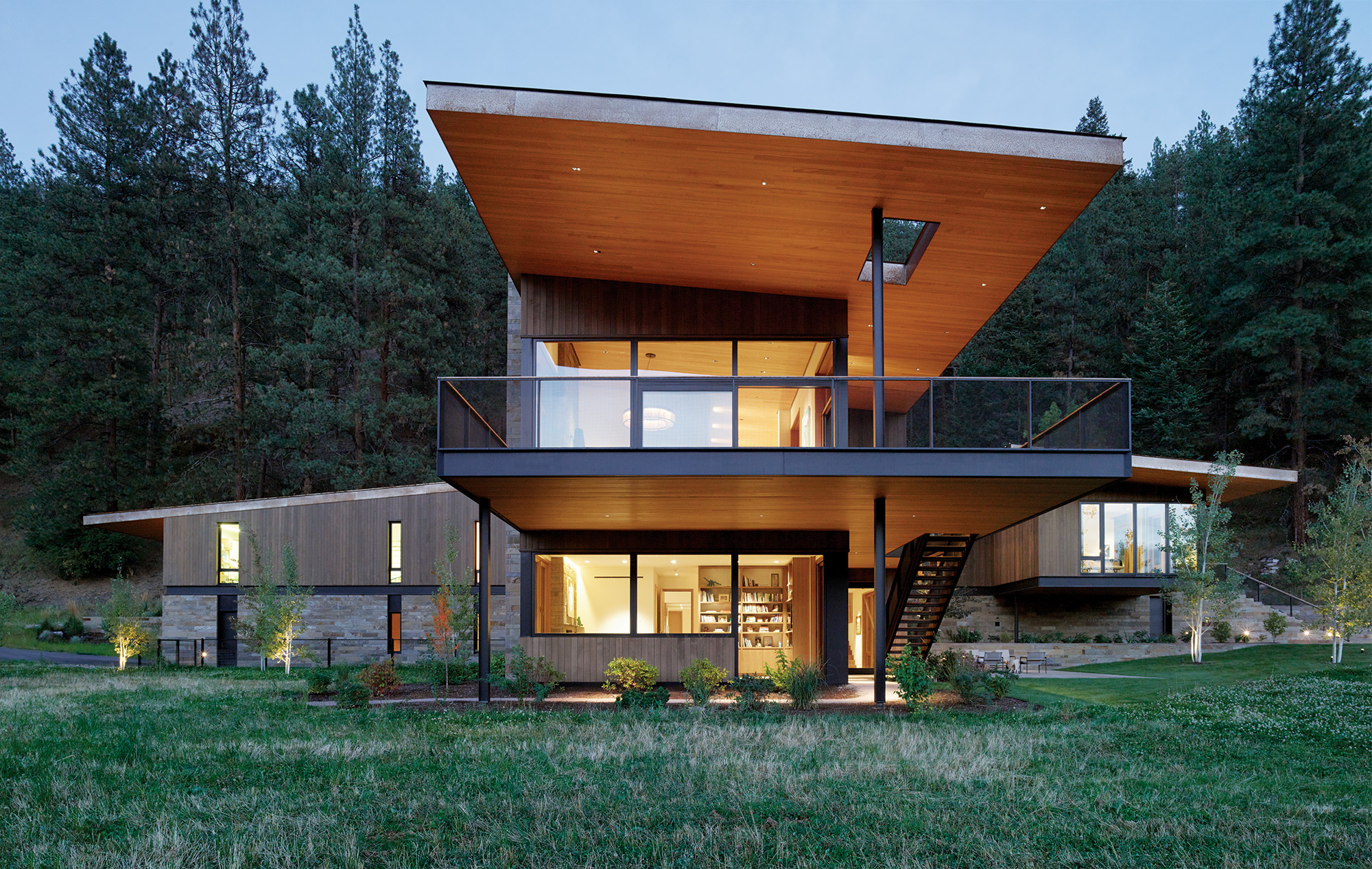 13 Apr Rooted in the Land

TUCKED AWAY IN A NARROW VALLEY in Western Montana, a small meadow runs up against a steep hillside. Old ponderosa pines tower above, their crevassed trunks honey-colored in the late afternoon light. Deer browse nearby, weaving through hawthorn and chokecherry. And nestled into the crease of the land, between field and foothill, sits a gem of modern architecture, designed so skillfully and with such attentiveness to its surroundings that its presence seems to augment the natural beauty of the setting rather than distract from it.

That’s no small feat, given the size of the house. Normally when we talk about houses in the 9,000-square-foot range, we use words like “grand,” or “stately,” or in unfortunate instances, “ostentatious.” Rarely are we compelled to describe them as “quiet,” or “subtle,” or “graceful.” But in this instance, those descriptors are spot-on.

“We wanted to make it invisible almost,” said one of the owners. “It’s discrete. The size is not obvious from the road.”

Of course, it’s impossible to make a house of this size disappear completely. However, tricks of architectural wizardry and keen siting go a long way toward making a home feel like it grew organically out of its surrounds. The bulk of the building runs along the base of the hill, and from a distance it’s almost unclear where home ends and hillside begins. Meanwhile, the main wing sits perpendicular to the hillside, cantilevering out toward the meadow like the prow of a ship. Replete with floor-to-ceiling windows, this wing appears light and airy, as though floating. The impression is aided by oversized rooflines that tilt and inflect, soaring above the second-floor porch, which add to the sense of weightlessness, and also reference the natural slope of the butte just beyond. A second, smaller wing mirrors the first, perched above a patio and pool.
It’s no surprise that the home itself is a work of art, given the team responsible for its creation: architects Eric Logan and Andy Ankeny, of Jackson Hole, Wyoming-based Carney Logan Burke, and Los Angeles, California, designer Colin Dusenbury partnered on the project, but if you ask them, the true vision and inspiration for the home came from the owners.

“We had a great team. We do lots of high-end residential work, and the very best projects happen with great clients. [These clients] really are at the top of the list in terms of our interactions. They’re very gracious, very thoughtful, and have a lot of respect for what we do, which isn’t always the case,” said Logan.

Dusenbury seconded the thought, and also referenced one of the key elements of the design program. “They had a very clear idea of how they wanted the process to go, but not as much of a clear directive about how they wanted it to look, which was a really fun way to work,” he said. “They’re very committed to artists or anybody of a creative mind, and they gave me and the architect the same sort of respect.”

As life-long supporters of the arts, the owners brought two important pieces to the project. The first was the willingness to let Logan and Dusenbury run with the creative process, and design a spectacular, creative, one-of-a-kind home. The second was a tremendous, world-class art collection, a portion of which would be on display in the home.

Designing a space to house works by Warhol, Rauschenberg, Calder, Katz, and a veritable who’s-who of contemporary artists might prove daunting to some, but not to this team. “The art is at the forefront,” said Dusenbury, “and it’s very, very inspiring. And in the definition of inspiring I think there’s always that twinge of intimidation, but that’s what kind of gives it the spark at the edge, and it keeps you going. It’s such an honor to be that close to those works, and also close to a family who is such a supporter of the arts.”
Logan also pointed out that the owners weren’t limiting in how the art and architecture should pair. “But we didn’t approach the house design thinking about which piece [of art] needed to go where, which was liberating. We got to design the house and think about the site and what the form was like and where we’d put everything, and then as the interior architecture developed, the owners determined which pieces worked best within the space.”

The result is a mastery of interior design. Flat expanses of white plaster walls serve as a discrete backdrop to prized paintings. Themes in materials and finishes flow from one room into the next, creating a sense of seamless continuity: Black walnut floors, hemlock ceilings, and quarter-sawn cherry cabinetry appear throughout.

The floor plan itself draws a visitor through the home, from the more sheltered back of the house to the airier front. From the main entrance which faces the hillside, the home beckons the guest through the more enclosed spaces of foyer and kitchen, and out into the bright, open living room with its views of the meadow and the peaks beyond. The smaller, highly private wing of the house is connected to the larger by a glass walkway, and contains the master bedroom, master baths, and cloistered office or meditation room.

What’s striking about this home — beyond the attention to detail, the top-tier craftsmanship, the art, and the décor — is how truly comfortable it is. It feels like a sanctuary. Each window commands a beautiful view. All the finishes — whether textile, or stone, or wood — feel warm and welcoming. Each color was meticulously chosen. The doors, by Norris Woodworking, are massive and sturdy, with stout hardware. Each room has a sense of character that deftly reflects its particular function: the living room is inspiring and elevating, and the library — tucked at the back of the house and opening out into the forest — feels snug and secure. Not a thing is out of place.

That, ultimately, is how the house sits on the landscape as well. Arriving on the secluded dirt road and ascending the driveway, a visitor would find it hard to believe the house was only completed a year ago; it has the feel of always having been there, something solid and balanced and rooted in the land. 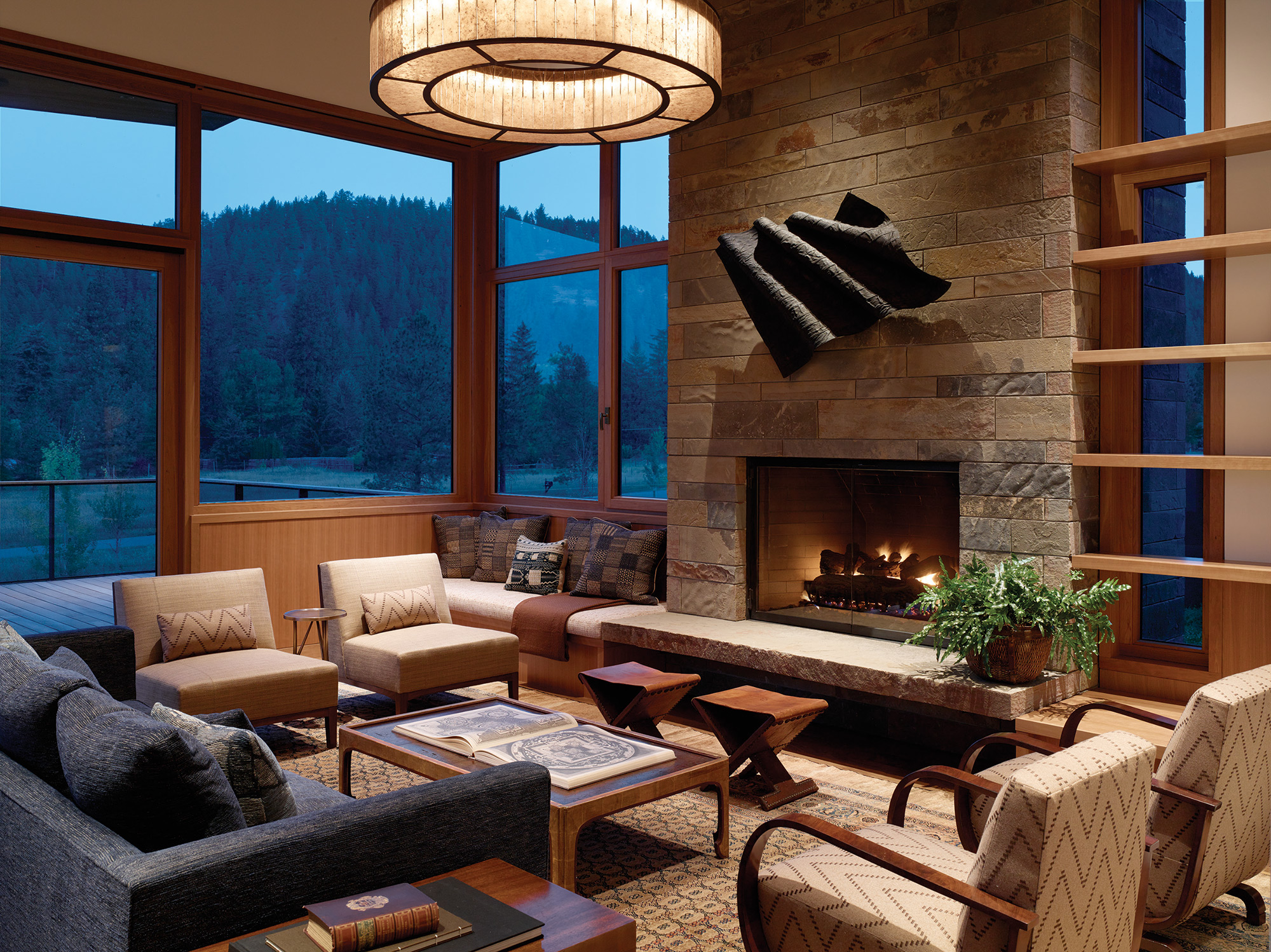 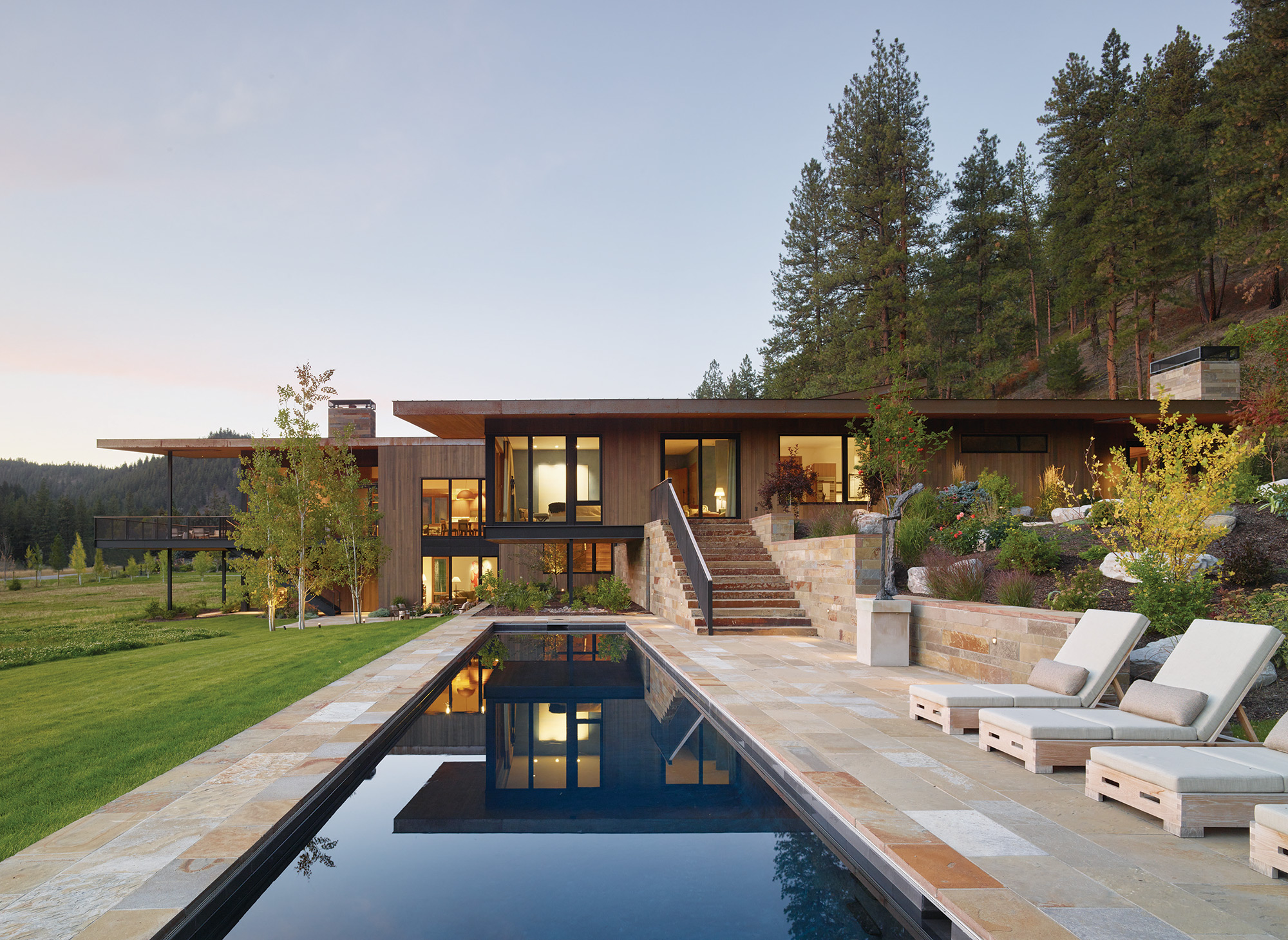 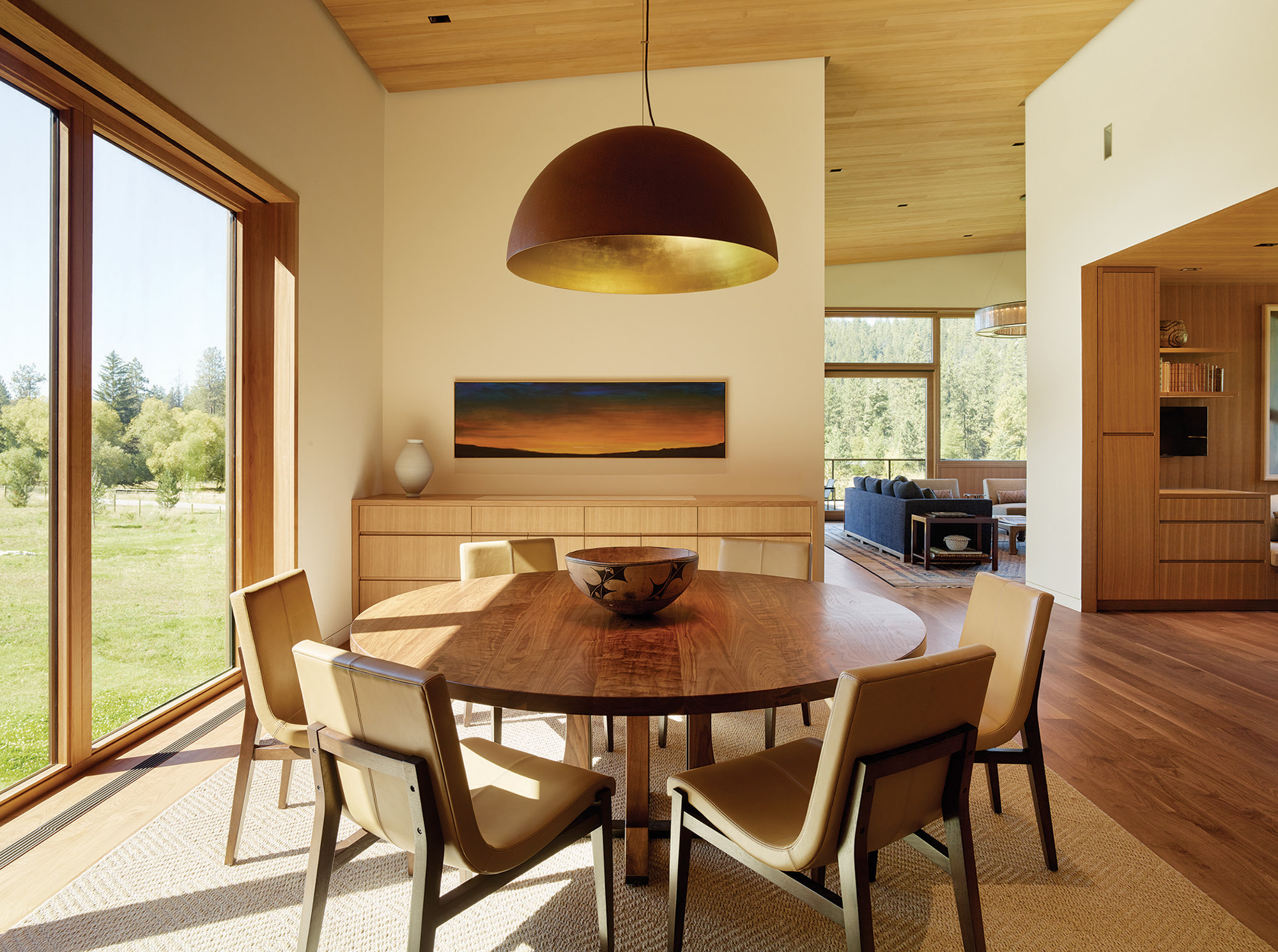 Each design detail was carefully considered — the curves of the chandelier echo those of the bowl on the table, the shape of the chairs, and the horizon in the painting beyond. 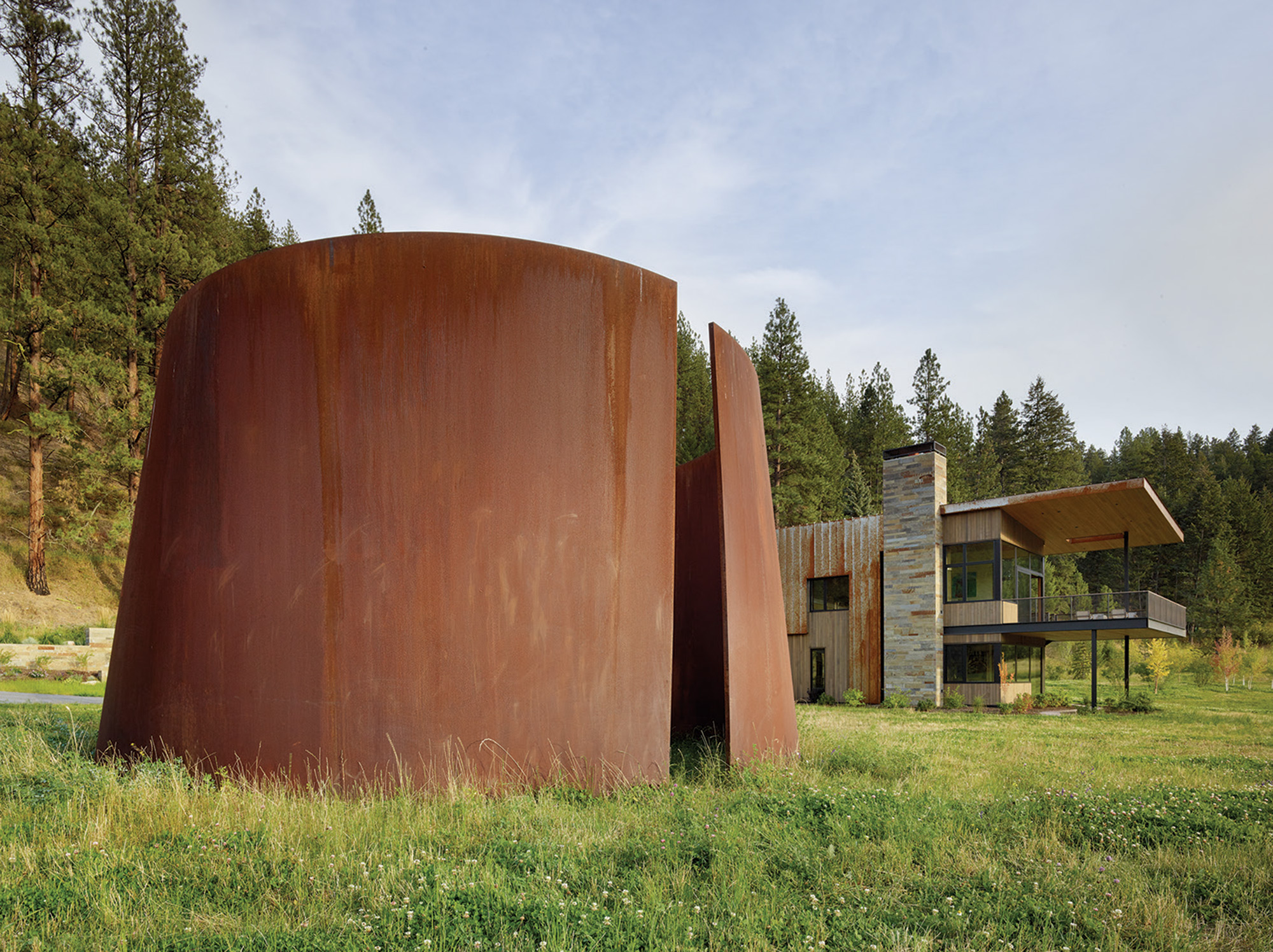 A Richard Serra sculpture stands a distance from the house, its rusted steel echoing that of the home’s roof and siding. 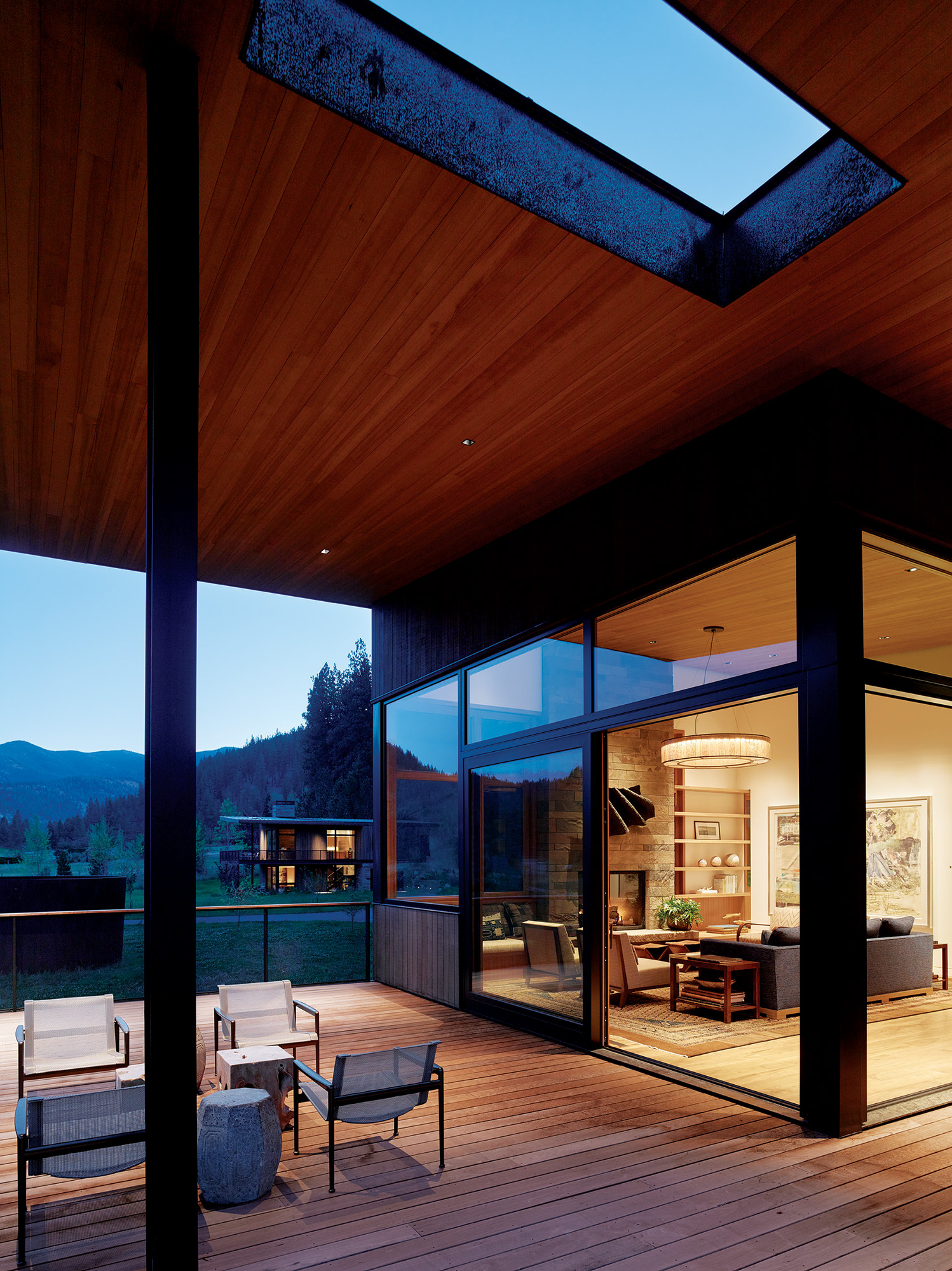 The inclined roofline continues uninterrupted through the plane of the wall, creating a seamless transition from indoor to outdoor living space. 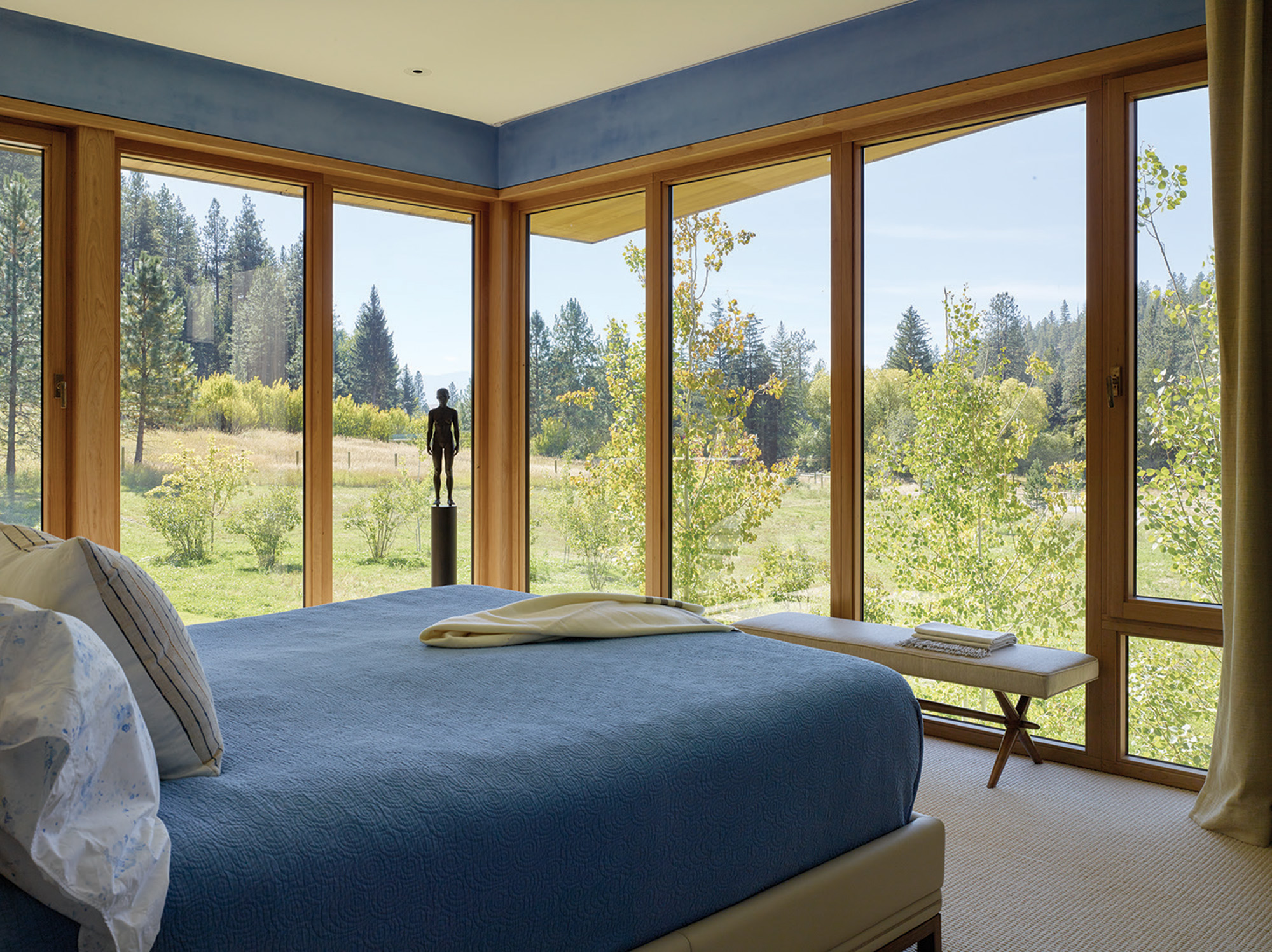 The master bedroom is a serene sanctuary in blue, and a Henry Moore sculpture stands silhouetted before the views of the meadow and aspens. 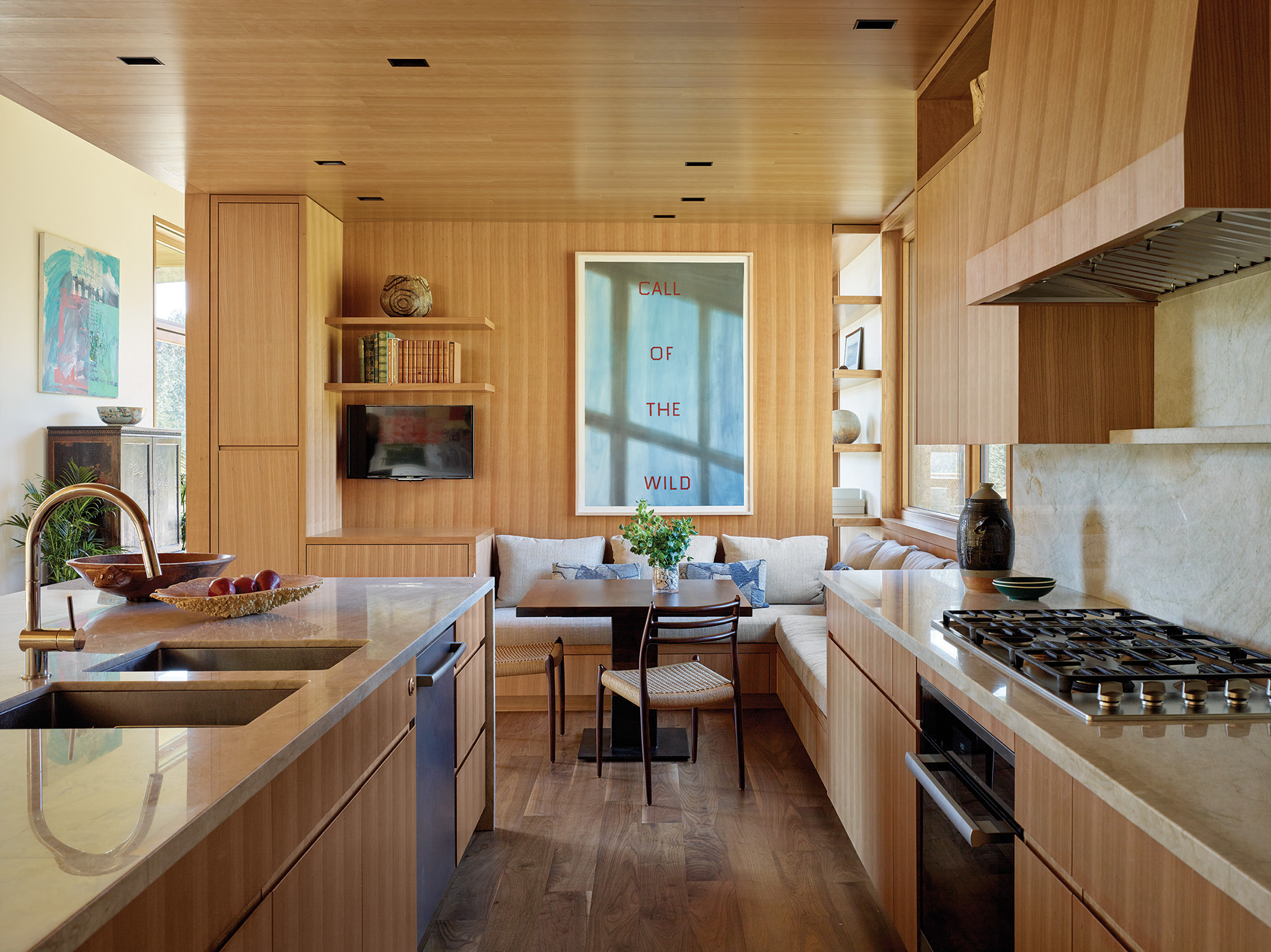 Quarter-sawn cherry cabinets add clean, modern lines in the kitchen and throughout the house. 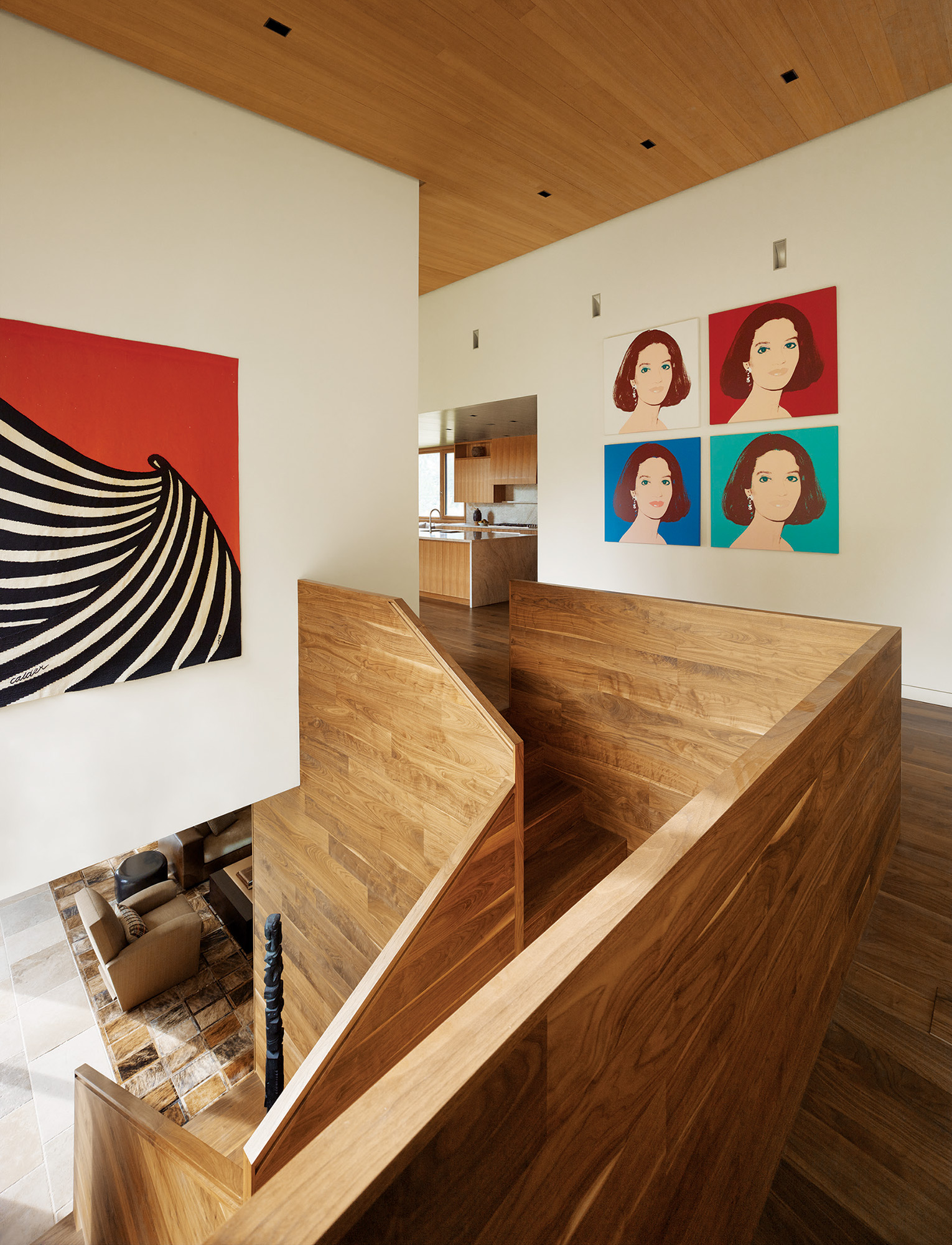 White plaster walls provide the perfect backdrop for a world-class art collection, including work by Alexander Calder and Andy Warhol. 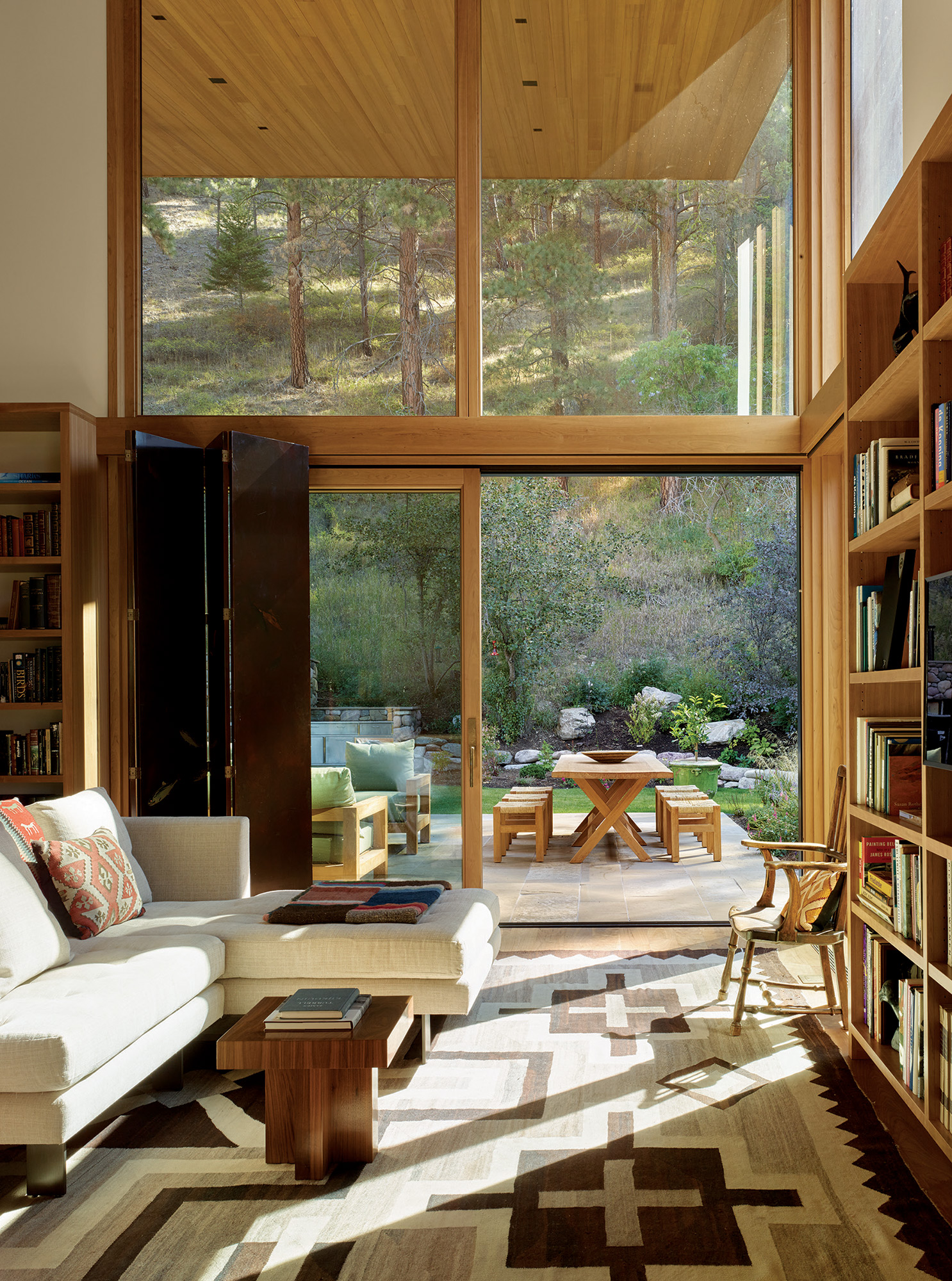 A secluded library provides a peaceful sanctuary and a view into the ponderosa forest beyond. 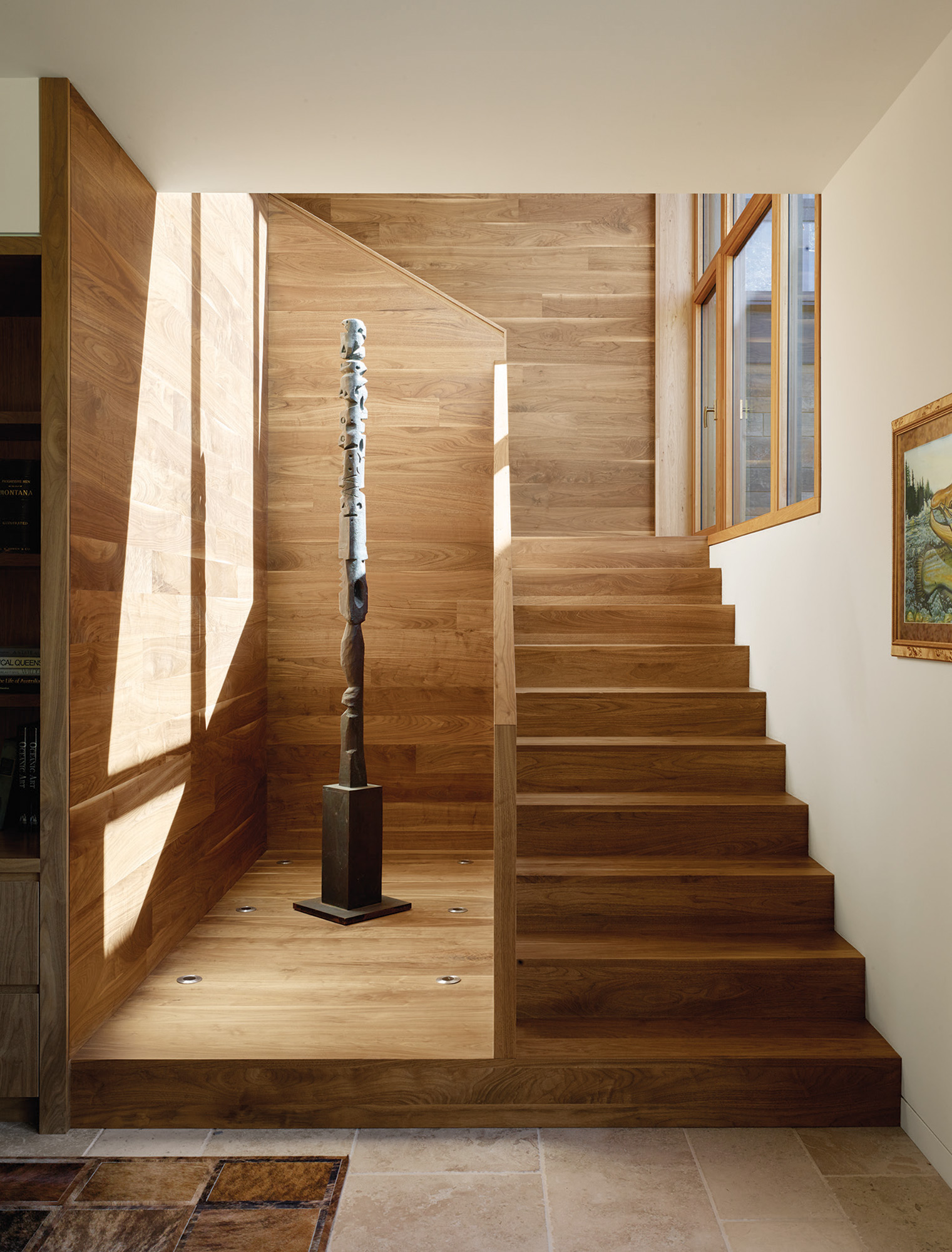 While the home was not designed around specific pieces of art, it affords ample space to display works of all shapes and sizes.