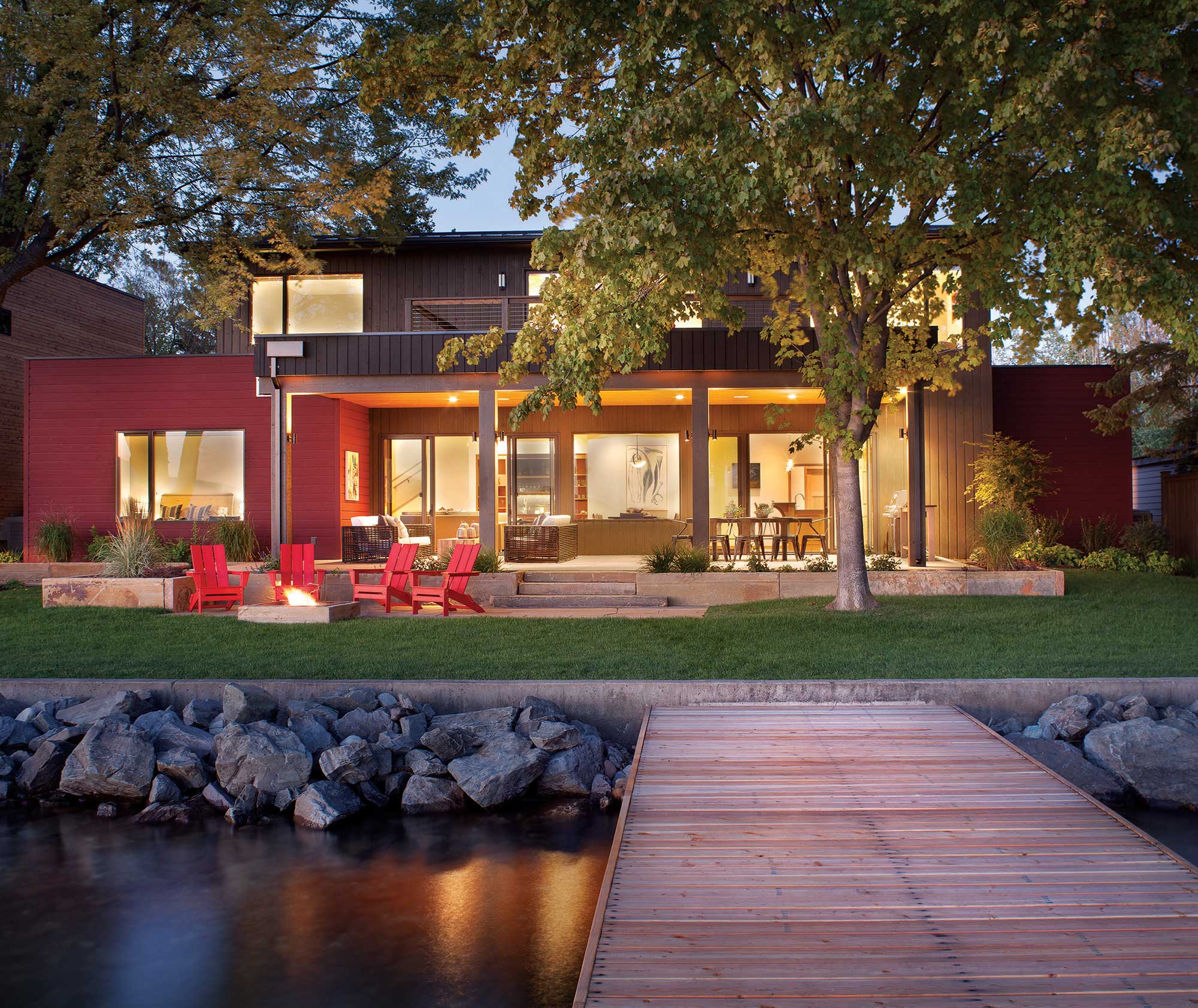 WHEN THE OWNER AND FOUNDER of Blue Frog Bar & Grill and KABB, two popular bar-and-restaurant chains in Asia, envisioned a tranquil escape from his fast-paced life, he went back to his roots. The Montana native purchased an older vacation home tucked away on Flathead Lake, and enlisted the talents of J. Martin Builders, CTA Architects Engineers, and Hunter & Company Interior Design to bring his vision to light. Together they joined forces to create Rivers End, a contemporary waterfront home designed to gracefully accommodate an influx of guests while showcasing its spectacular setting.

When the principals first began planning their approach to this Rocky Mountain Modern lakeside retreat, their original goal was to simply clean up and remodel the original home to “improve its flow and functionality,” according to Jason Gerbozy of J. Martin Builders. “But then the plans got pretty elaborate. We discovered some engineering issues and ultimately concluded that it would be safer and more efficient to tear down the house and rebuild. That decision led to our playing with a lot of ‘what ifs.’ For example, we discovered the original house was built on two lots. What if we were to build two houses instead of just one?”
The team ultimately designed and built two buildings, which share a similar design, but offer completely different perspectives. “There’s definitely a relationship between the two homes,” Gerbozy said, “yet they are very distinct properties.”

With breathtaking views of Flathead Lake and within walking distance of downtown Bigfork, the first of these two properties is both accessible and private, making it easy for friends and family to come together in a getaway. The two-level, 2,855 square-foot home was designed with entertainment in mind, featuring a large great room, state-of-the-art kitchen, and three master bedrooms — each with its own bathroom, walk-in closet, and stunning view of the lake.

“When it came to drawing up plans, we all really thought big,” said David Koel, principal and architect at CTA. “We considered a number of different variations that were pretty elaborate and extensive. Once they were out there, we were able to pick and choose what really worked. We took the designs as far as we could take them and then we reined ourselves in.”
“In the end we decided to keep it simple,” he added. “We kept coming back to … How do you want to live? What makes a space comfortable? How can we best make use of the surroundings? As a result, every room is crisp, open, and inviting — and offers an amazing view of the lake. ”

Expanding on this less-is-more approach, decorative details were eliminated wherever possible, simplifying the spaces. “We chose materials that were durable and sensible, yet still achieved the look desired by the owner,” Koel said.

The team intentionally limited the primary materials to a few basic elements — wood, stone, glass, and steel — and then brought them to bear in a variety of ways. Cedar was used inside and out, and rectangular subway tiles helped create a clean, contemporary finish throughout the house, including the bathrooms, kitchen, and living area. Built-in cabinets and a wet bar, plus a long, metal fireplace, further impart a modern, minimalist flare.

“We spent a lot of time exploring the best way to open the inside to the out,” said Koel. “Rather than compete with the beauty that surrounds the home, we wanted to connect to it.”

Two expansive upper and lower patio areas enable every social space to open to the exterior. Massive folding glass doors downstairs make it easy to allow the outdoors in. An upstairs lounge area connects to a secluded, shaded patio surrounded with built-in planters and steel railing. The outdoor area, while compact, feels much larger and more private thanks to the decision to preserve several mature trees on the property.
Proximity to the lake informed the interior as well. “The house sits really close to the water,” said Hunter Dominick, of Hunter & Company Interior Design, “which gives it a very intimate feel.”

Rather than abide by a rustic log cabin motif, the team put their own spin on mountain style, conjuring pristine white rooms accented with knotted wood, leather, feathers, and other natural elements. “It’s definitely modern, yet still organic,” said Dominick. “We chose different shades of blue to harmonize with the lake, and selected furnishings to complement the finishes. The only place where we incorporated any real pattern was on the carpet in the outdoor living area — mostly because it’s less expected to use a carpet like this outside.”

The constraints of the site posed a further challenge. “We were working in tight quarters on a small peninsula around trees and homes,” Gerbozy said. “Handling the complexity of what we were doing, and doing it in a way that stayed on track was quite a challenge — and really rewarding!”

While tearing down the original structure, the team discovered there were trees and brush in the fill. They had to remove and replace a substantial amount of material to ensure a structurally sound foundation. “That was tricky, considering the house’s close proximity to the waterfront,” Gerbozy said. “We had to wait for springtime, when the lake is drawn down, in order to remove all of the fill and organics, then rebuild.

“What I love most is the overall feeling I get when I’m in the house — it’s really comfortable,” he added. “It’s just so relaxing — it really makes you want to sit down and stay.” 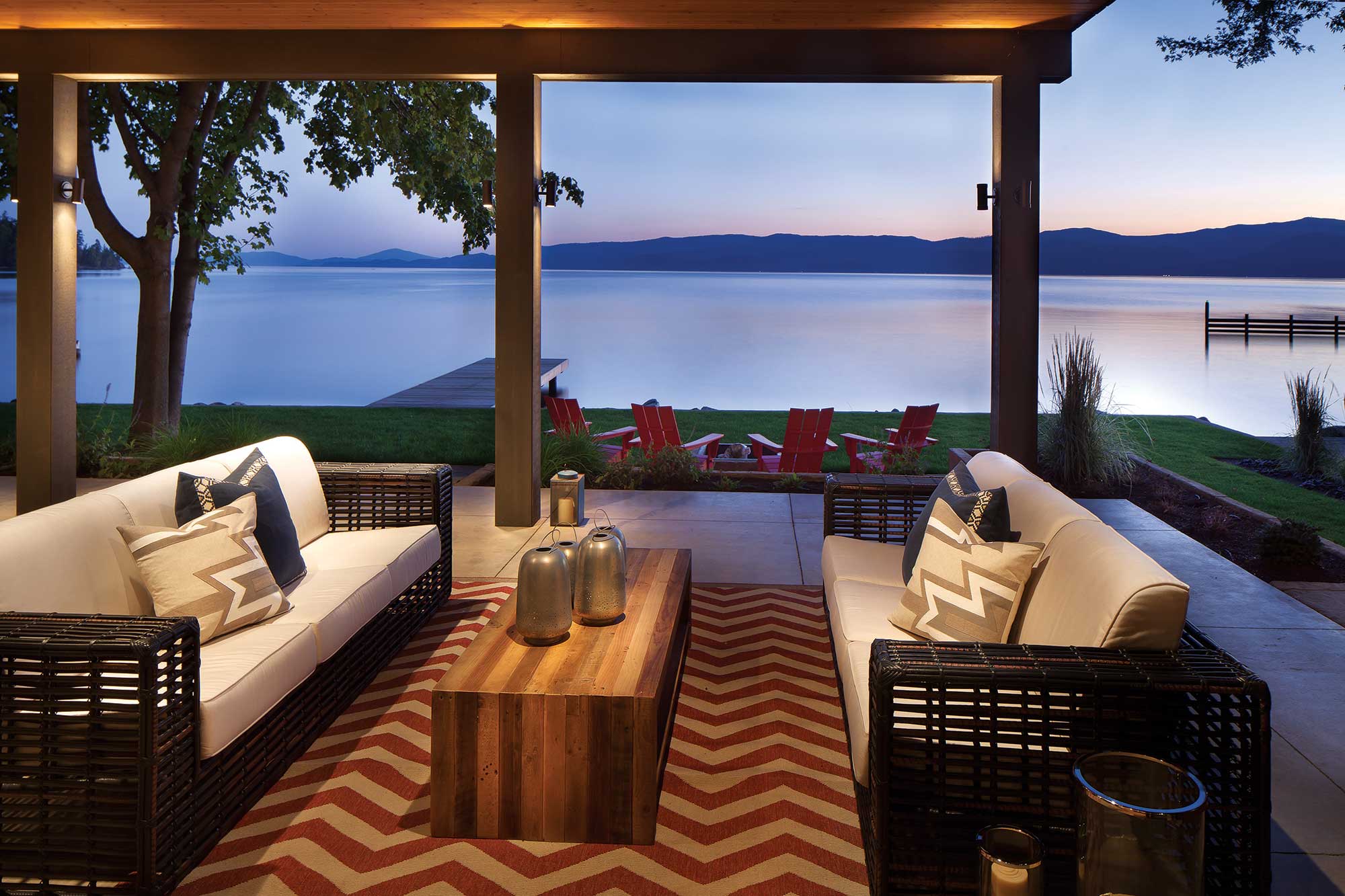 A bold, chevron striped carpet adds a touch of the unexpected to the outdoor living area. 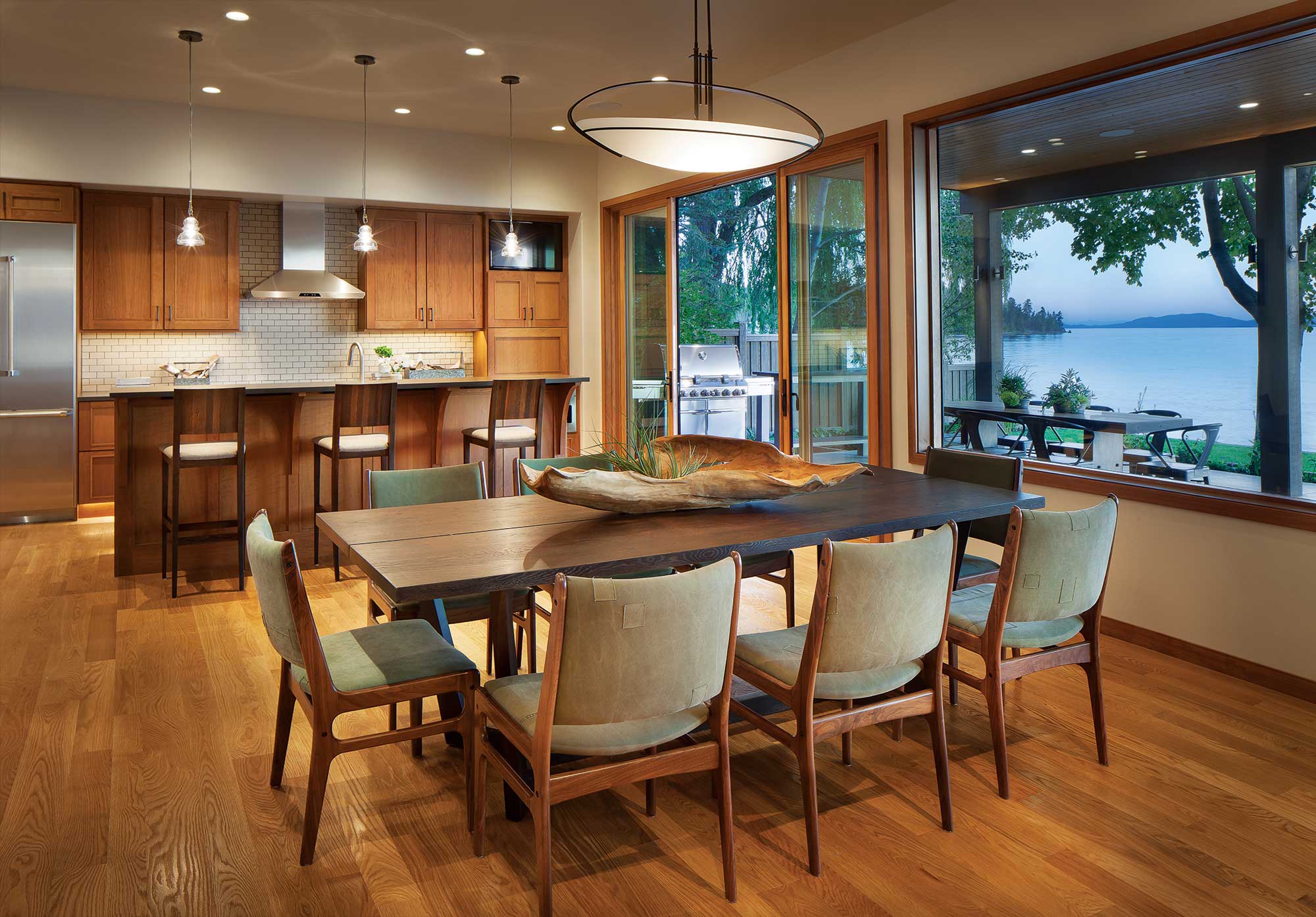 Designed with entertaining in mind, Rivers End gracefully accommodates an influx of guests while showcasing its spectacular setting. 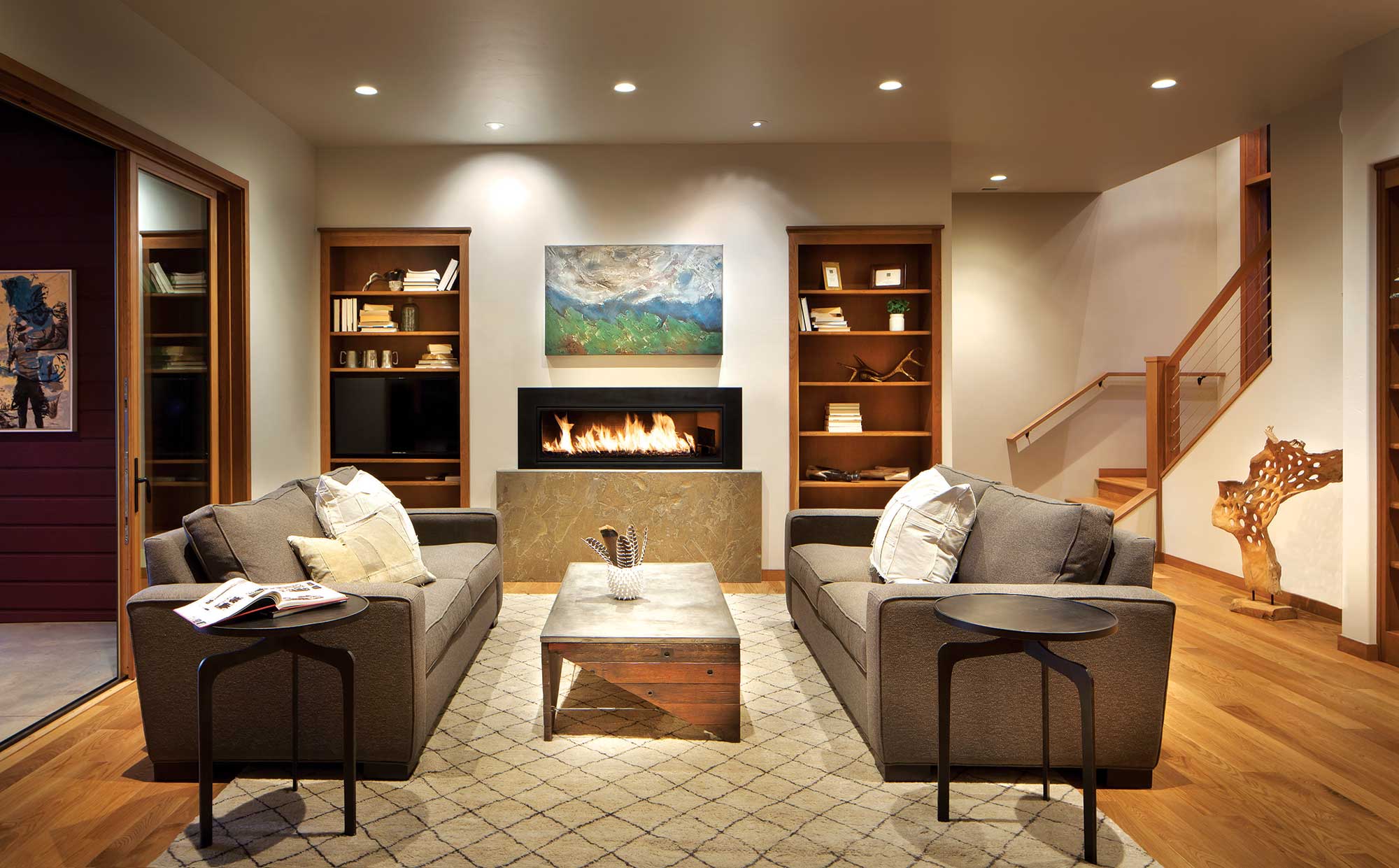 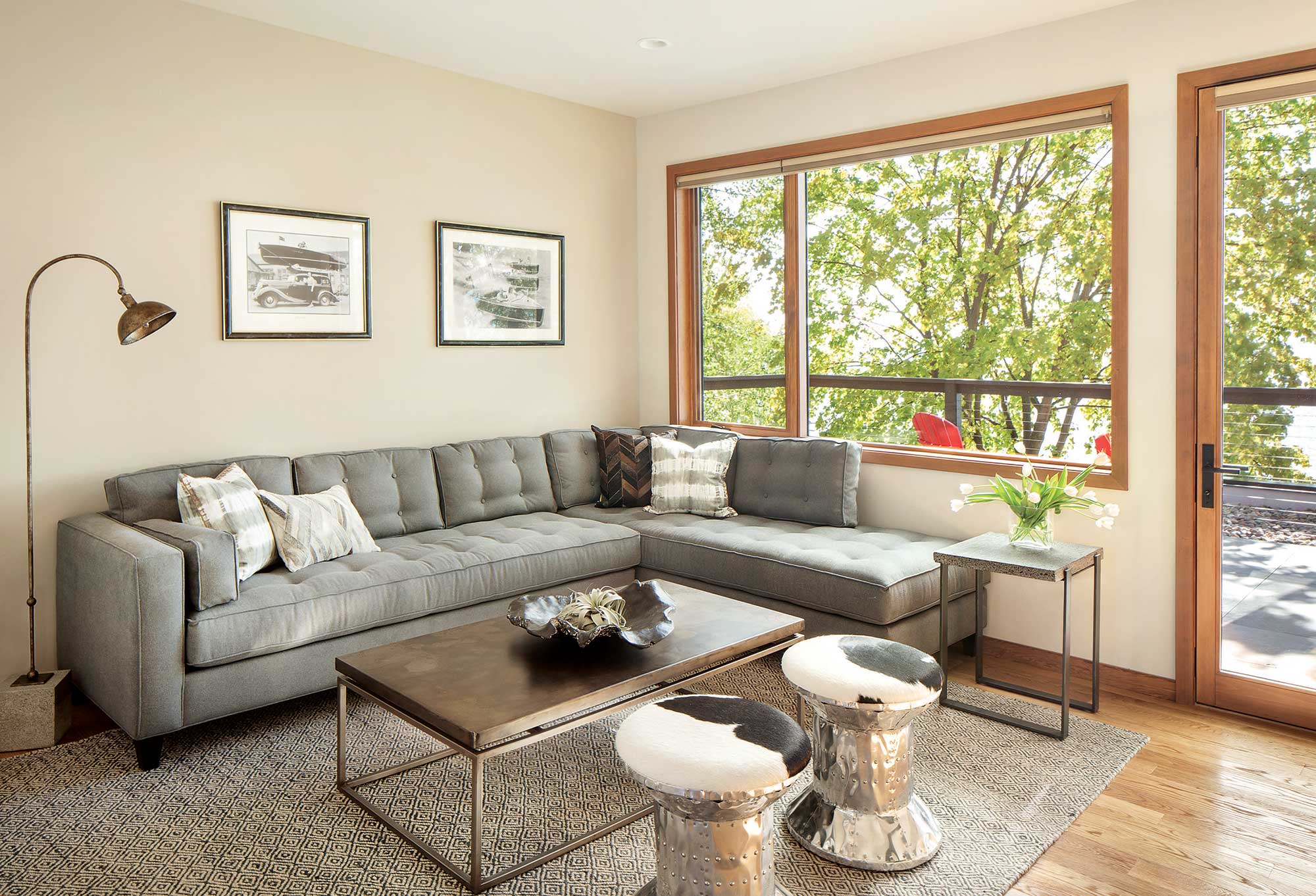 An upstairs lounge area connects to an expansive, open patio 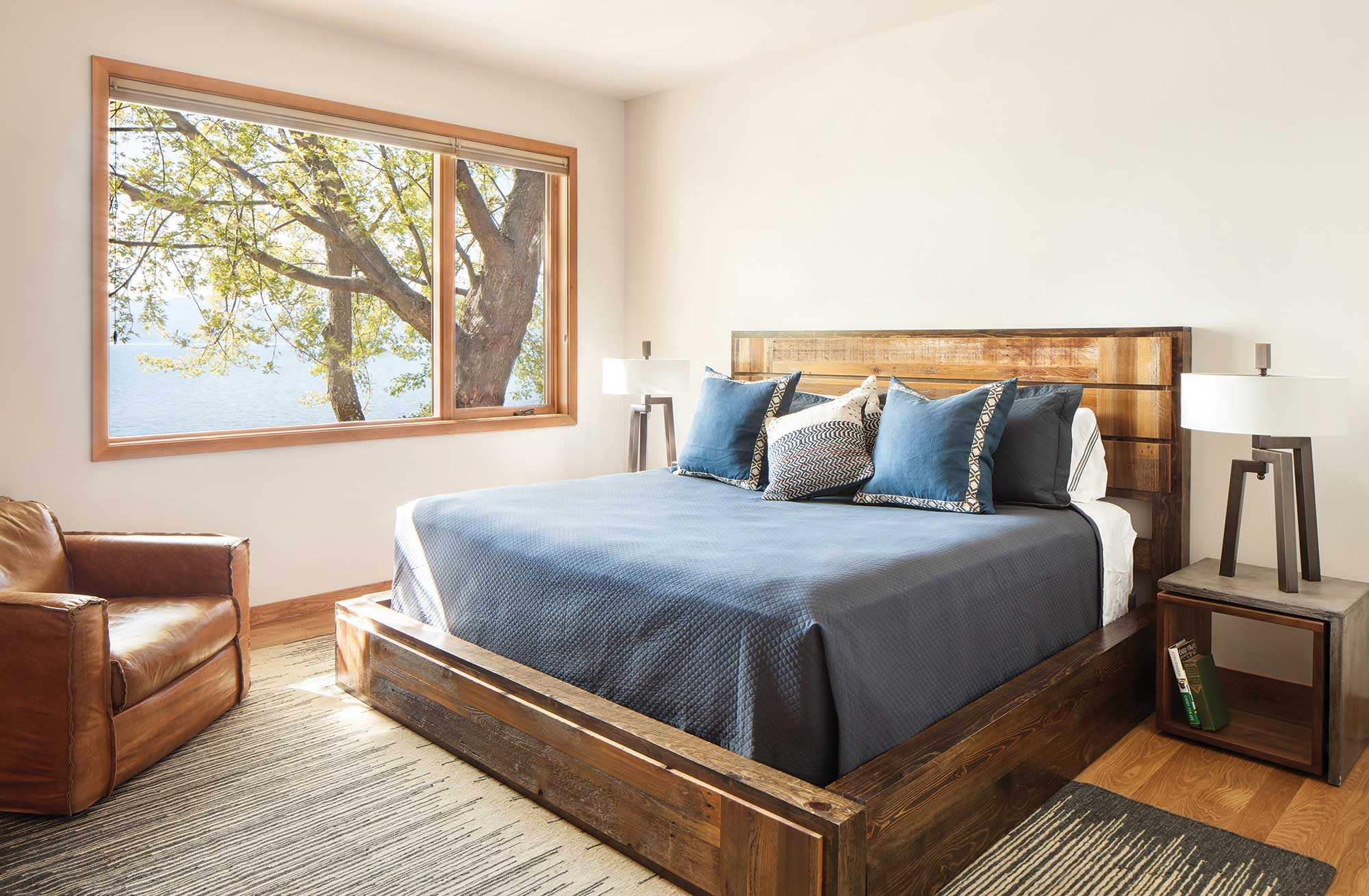 Blue hues and knotted wood furniture in the bedrooms harmonize with its exterior surroundings. 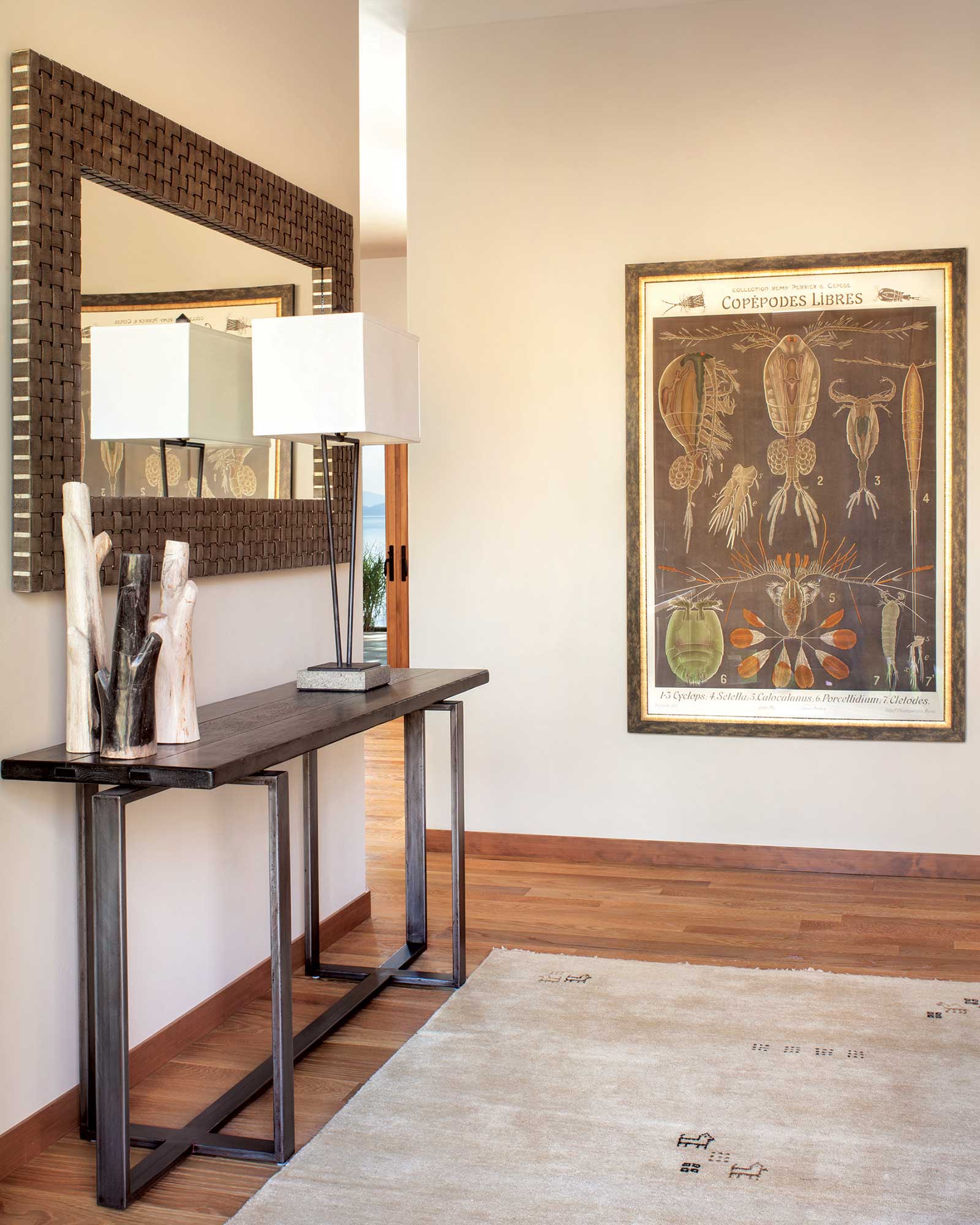 An organic mix of art and materials add texture to the entryway. 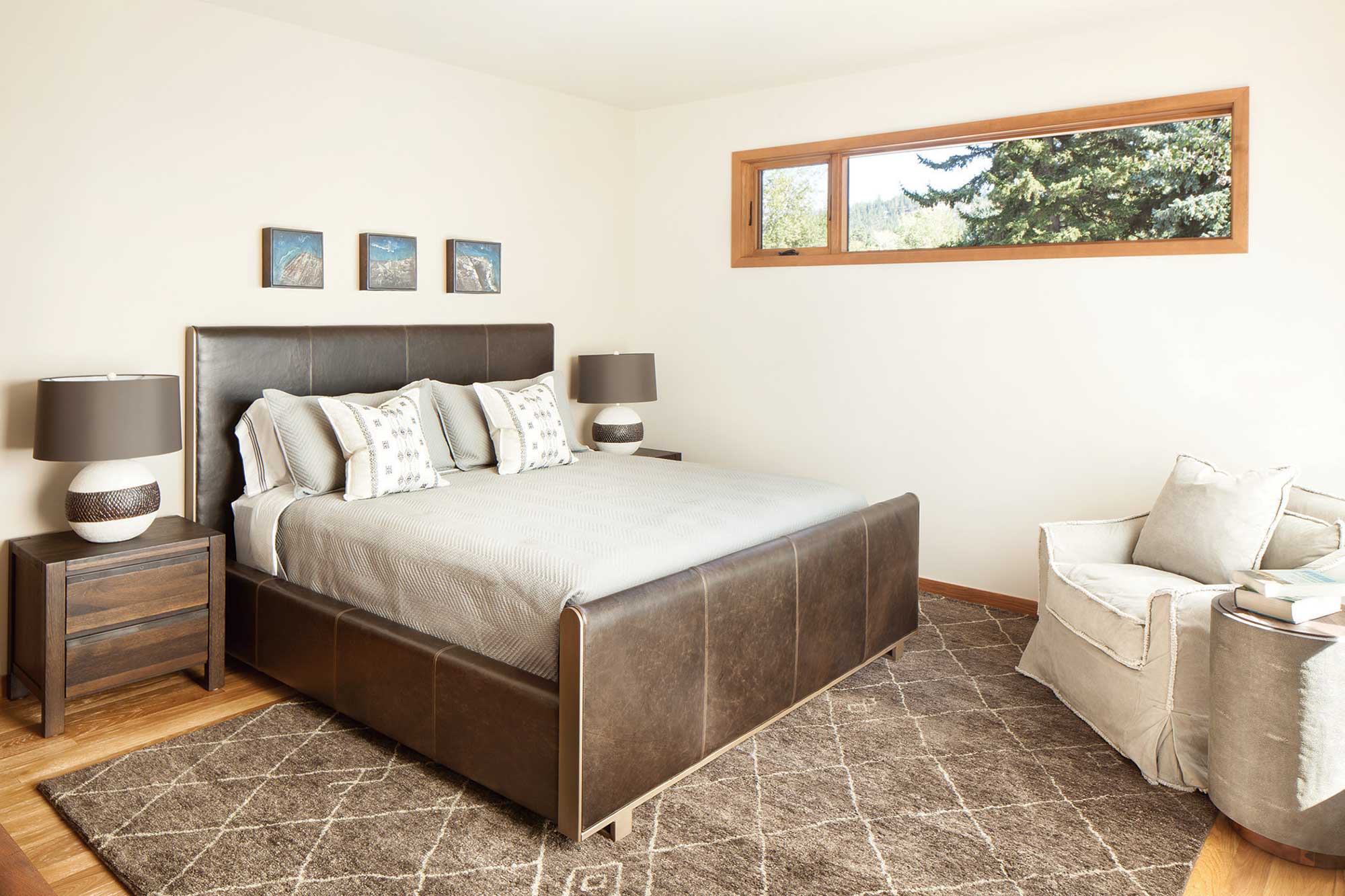 The team put their own spin on mountain style, conjuring pristine white rooms accented with knotted wood, leather, feathers, and other natural elements