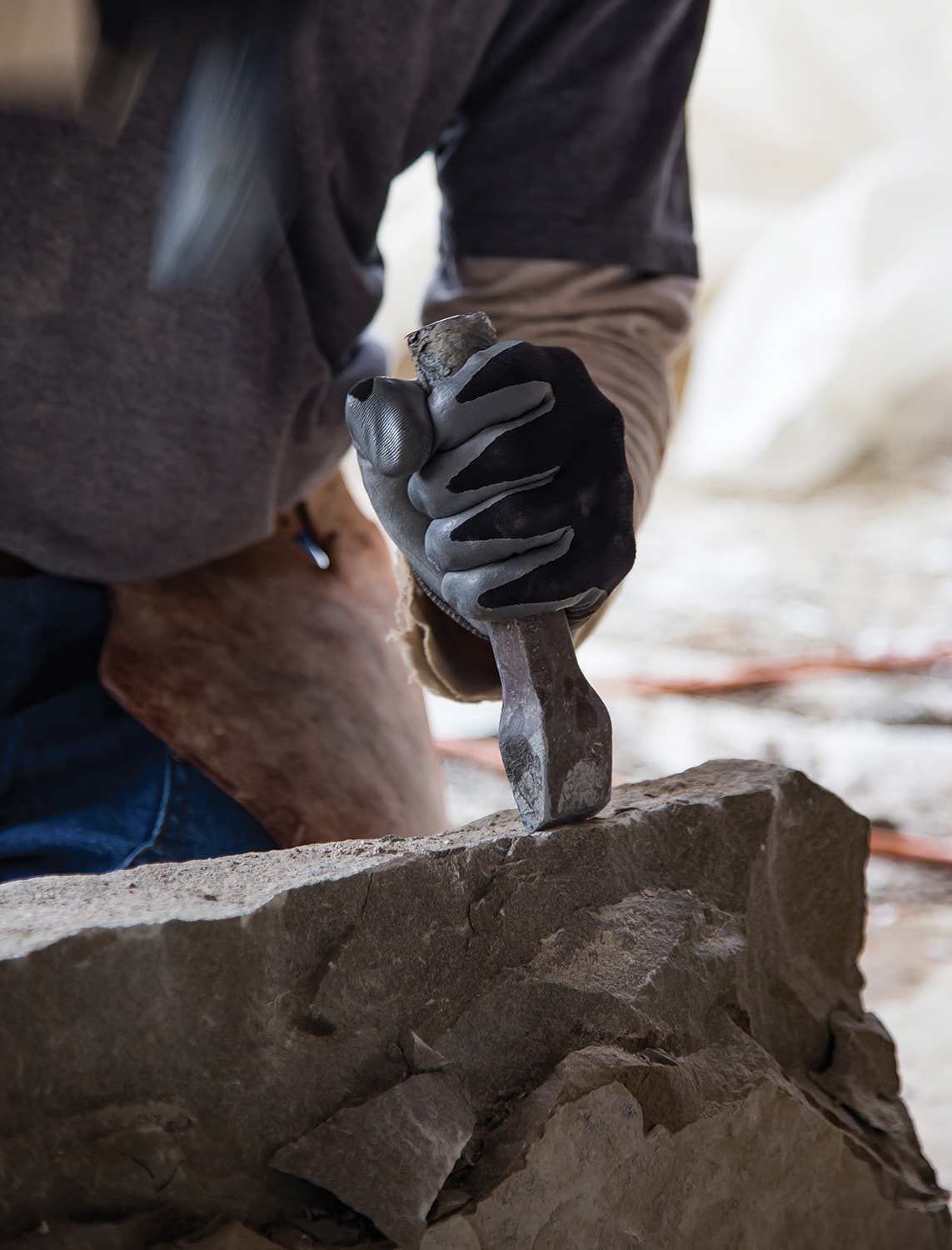 While the style of presentation may change with the times, the basic tools of the stonemason — a hammer and chisel — have remained the same for thousands of years. Photo by Allen Morris Jones

Maybe it’s the stone itself: the actual rock, the sense of permanence juxtaposed against the visible evidence of chipping, shaping, smoothing. Or maybe it’s the arrangement, the piece-meal accretion of one layer above another. But when I walk into a new residence in Bozeman or Big Sky, Montana, the latest in a series of superb, high-end homes, my eye tends to catch first on the masonry. Staircases, pillars, archways. If you pay good attention, here is the physical extrusion of thousands of hours of earnest labor, generations of specialized knowledge manifested in an arrangement of sandstone or moss rock or slate. Masonry is an art form, but one that’s meant to fade into the background, created by men and women who seem most comfortable working behind the scenes. I’ve often wondered: Who are these guys? And more importantly, how did they do that? 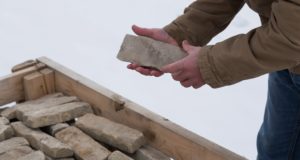 A pallet of stone sat at the job site, pre-cut to certain dimensions. Photo by Allen Morris Jones

“We’re all kind of rock nerds here,” said Elliot Frith, co-owner of Greater Rocky Mountain Stone (GRMS). Frith was showing me a job site in the Black Bull subdivision, west of Bozeman. We stood to one side, watching as their project leader, Adam “Sully” Sullivan, wedged a piece of 2-inch sandstone veneer against the leather apron on his thigh and chipped it into shape. “See how this stone has these softer edges?” Frith said. “It’s been tumbled. It even feels soft.”

In business since 2008, GRMS is owned by business partners Frith and Nate Gordon. They employ as many as 20 people at a time, and typically will be working half a dozen different jobs around the Gallatin Valley and Big Sky. They’d been working on this particular job since October 2016, and their site — even under a layer of fresh snow — showed the wear and tear of labor. Pallets of stone sat to one side, waiting to be picked through and placed; a mortar mixer stood beside bags of cement; drifts of rock chips lay piled under most every wall. 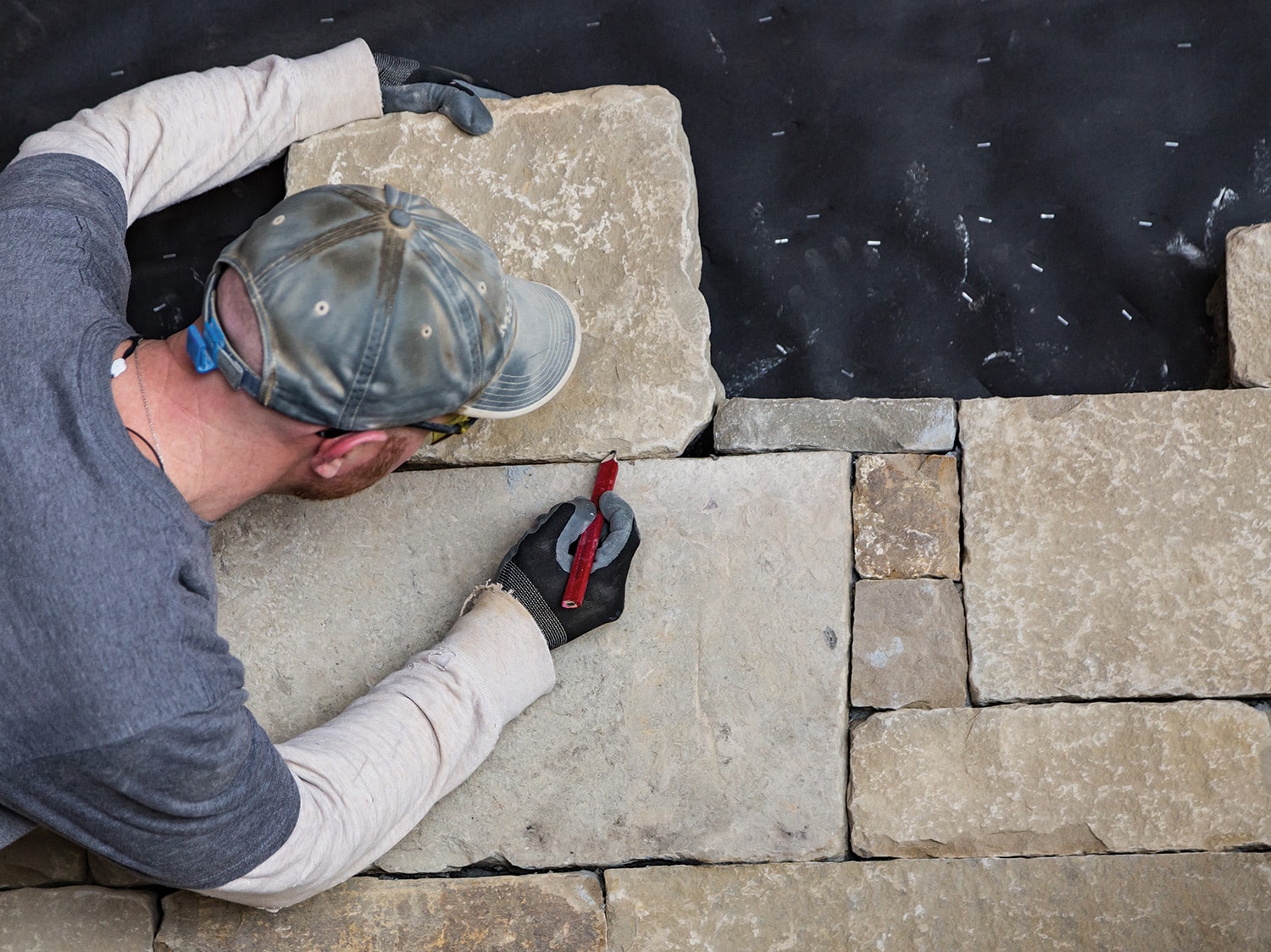 Adam “Sully” Sullivan set each stone according to its unique character and dimensions. Photo by Allen Morris Jones 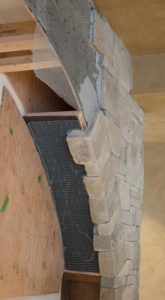 To lay this particular sandstone veneer, Greater Rocky Mountain Stone began by mixing the mortar. They spread the mortar strategically around each stone, and used galvanized wall ties for stability. Finally, they removed any protruding mortar to create a dry-stack look.

To one side, a younger man, Tanner Woods, hauled in a bucket of fresh mortar. “If we can, we like to train our employees internally,” Frith said. “Bring them up in the business. And we always start them out on the mixer.”

With a few exceptions (they were still waiting on an oven hood), most of the interior stonework in this house was complete. Fireplaces, walls, kitchen islands. Two masons were now working on different portions of an exterior wall, laying up a rock called frontier sandstone, quarried out of Harlowton, Montana. It came to them in thicknesses of 2 and 6 inches. Over the course of the morning, Frith showed me how an aspect of their craft lay in knowing when and where to use the thinner or the thicker veneer, and how to transition between the two. He indicated a portion of the hallway. “This was tricky. The owner wanted some extra room through this doorway, so we’re using 2-inch on one side but 6-inch on the other. The trick is to transition between them.” 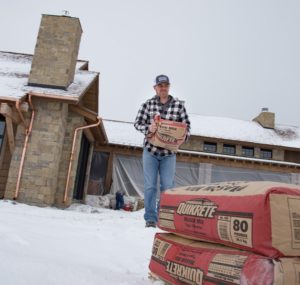 On an exterior wall, we watched while Sullivan measured a stone, then went to work with a hammer and chisel. Precise blows along a line only he could see. Gordon admired the work. “I always say there’s a little bit of magic to what Sully does.” Having shaped the stone to his liking, Sullivan brought it to a low scaffold, stepped up to the wall with a bucket of mortar, and troweled on a layer. He settled the rock into its bed, maneuvering it until it fit. Frith said, “Notice how he’s staggered the lines. If you ran a seam all the way up, you’d notice it.” While we watched, Sullivan produced a 6-inch galvanized wall tie, bent it at a 90-degree angle, and screwed it into the wall. He troweled a layer of mortar overtop, preparing it for the next rock. Frith said, “He’ll put those ties every 16 inches or so.” Sullivan then took what Frith called a striker, a hand tool with a tapered point, and began pushing any piece of protruding mortar back into the seam. “That’s what gives it that dry-stack look,” Frith said. 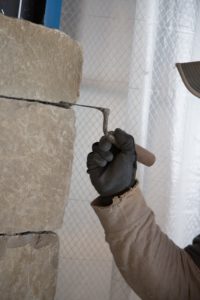 Further along the trestle, another GRMS mason worked on a section of the same wall. A radio played classic rock. I asked Frith what sort of time was involved in a typical custom-home job. He thought about it, did some quick calculations. “We might have six to eight months in it, and three guys working five a days a week. So maybe 15,000 man hours?” 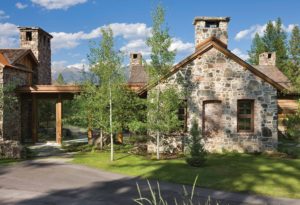 Mortar-stacked rubble with reclaimed brick accents created what Dennee described as a “softer, almost primitive look.” He added, “We use this variety often to suggest historic charm or to tie into more European-inspired architectural styles.” Photo by Roger Wade

The masons, of course, are just the end point of a larger infrastructure. For a given rock to make its way from horizontal firmament to vertical wall, it takes a number of other collaborative steps.

Locati Architects, based in Bozeman, will — at any given moment — have a number of projects in the works, all around the country, and at various stages of completion. Most of those homes involve some form of stonework. Within Montana, there are five or six masons with whom they regularly work. Joel Riendeau, Locati’s project architect for the home I toured in Black Bull, said, “Masons are artists, and we like to allow them the freedom to do their work.”

At the beginning of a project, the architects will discuss different stone types with both the owners and masons, proposing different looks. Greg Dennee, a partner with Locati, told me, “We talk about scale, variety, how much relief is in there, colors. In different stone types, there could be objectionable color. Getting the masons on board with all the criteria and factors is one of the first steps.” Eventually, they’ll show the owners a mock-up of the rock they’ve chosen. 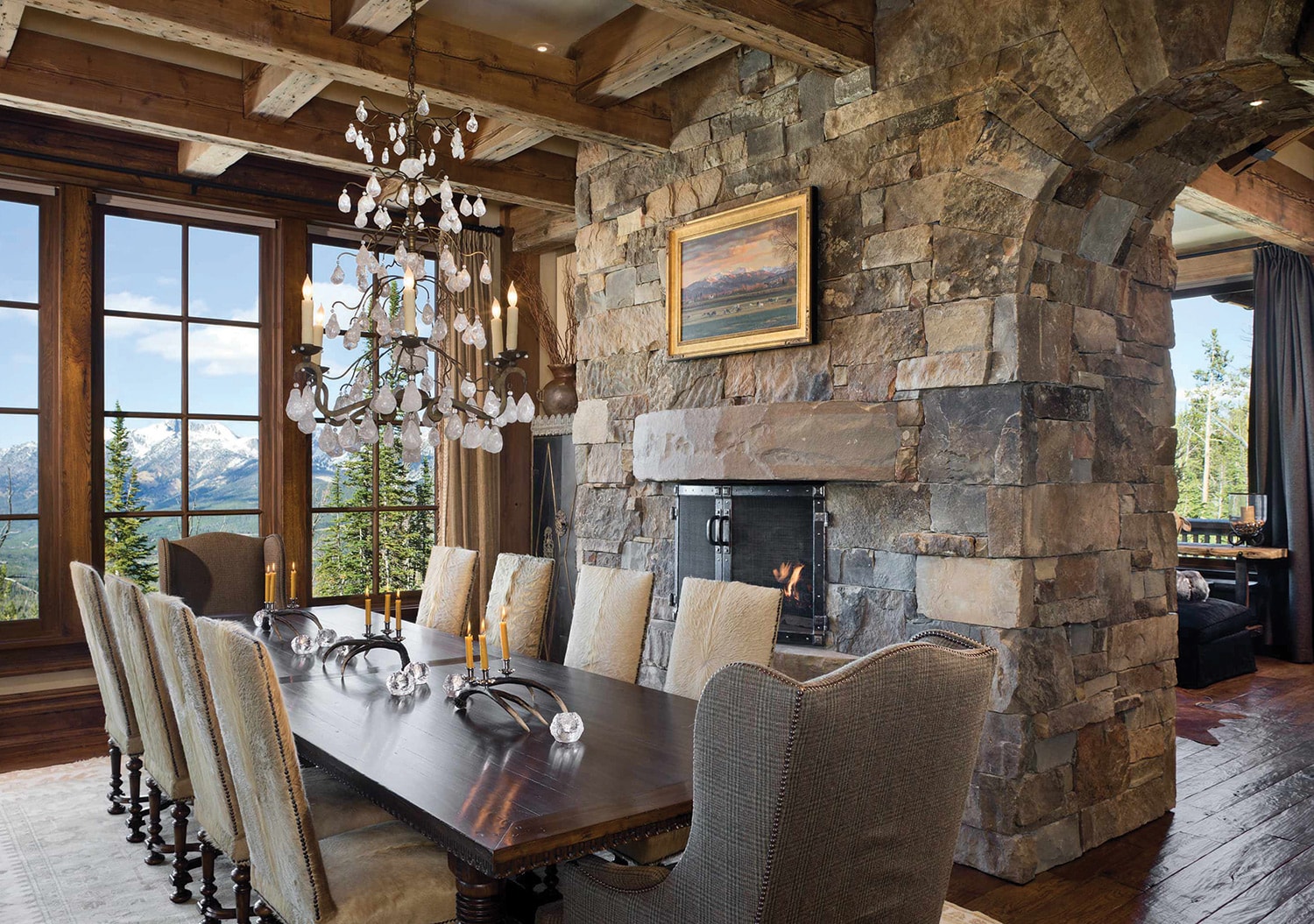 Dry-stacked Montana fieldstone is one of their most common styles. Greg Dennee of Locati said, “Dry stack is versatile in the sense that it can be used in traditionally rustic homes as well as more contemporary homes.” Photo by Roger Wade

Locati has come to be known for a particular look, a particular style. “One common thread through all of our work,” Dennee said, “we tend toward an architectural aesthetic. We like to use stone in a way that reinforces corners, that has a straighter look to it.” He added, “A really excellent stone job is one wherein there’s no repeating patterns, where there’s variety from one edge of the wall to the other. More than anything, one of the hardest things masons deal with … we have a lot of large homes, and so getting the stone to look the same from one end of the home to the other is where great masons separate themselves. It should also look like there’s a structural purpose. That’s the other criteria for a great stonemason. Stacking the stone in such a way as to always make it look like it’s holding something up.” 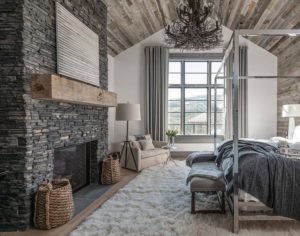 A contemporary, small-scale Ashlar stack in the fireplace was used to complement a more contemporary interior. “We’ve used similar stacks in modern projects…where the presence of stone is desired but a feeling of calm is sought,” Dennee said. Photo by Audrey Hall

But even before the stone becomes a concern of the architect and the masons, it is a point of pride for the quarrymen who find it, expose it, move it, and often saw it into initial shapes and sizes.

Frith told me that most of the stone they work with comes through a yard in Gallatin Gateway called Quarry Works. One of the owners of that business, Kevin Andres, said that they’ve been in business since 2000. “We’ll move between 7,000 to 10,000 tons of rock through this yard in a given year,” he said from his second-floor office. “Most of it residential.” He paused. “I did a house up in Whitefish, we put over 4,000 tons on it. That rock was technically sandstone. We made a quarry specifically for it. The owner wanted it to look like Sperry Chalet in Glacier, which was kind of a purple stone.” 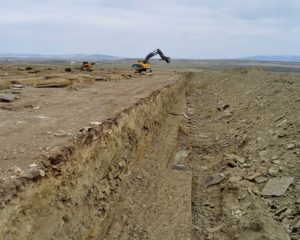 Outside, after a February snowstorm, I watched as three different couples browsed around and through a selection of stacked samples. Andres looked over my shoulder, and at my request named the types of rock. He said, “That’s pewter-gray limestone, then Mojave shift ledgestone. Glenn Rose limestone. Deep Creek Chief Cliff out of Western Montana. Windsor gray, that’s another limestone. Cabinet Gorge. Some granite, some basalt. Those are typically processed. They come out of the ground in huge blocks that we have to saw down.”

In order to source their inventory, Quarry Works maintains a relationship with a number of quarries, including a few in the state that are specific to their business. The Harlowton quarry keeps 20 to 30 employees, varying seasonally. They harvest the sandstone from an 18-inch seam. “It comes out in big slabs,” Andres said, “then we chop it into squares, and run it through a veneer saw to cut it down.”

Quarry Works also has a fabrication shop in Belgrade, Montana, where they process their material. “Most of our saws in Belgrade can cut about 12 inches in height. They run a 40-inch blade. If we have to go bigger than 12 inches, we have to get creative.” 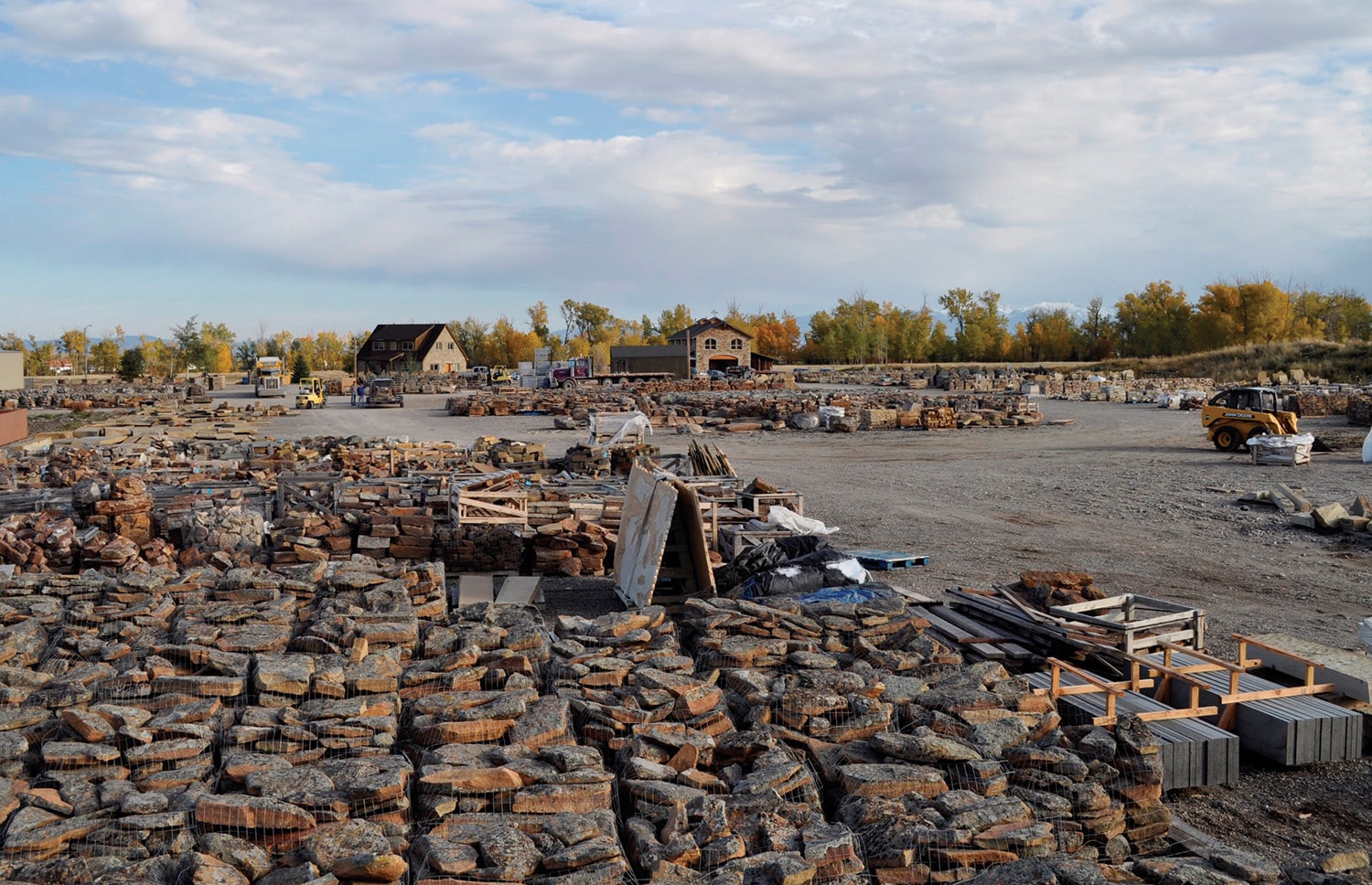 Given high demand among builders and architects, the inventory of Quarry Works typically doesn’t sit for very long before finding its new home. Courtesy: Quarry Works

Each stone, Andres pointed out to me, has its own characteristics in terms of labor. If you’re a homeowner or a builder planning out a budget, the price of the stone itself isn’t necessarily the deciding factor. “You might pick a stone that’s more expensive, but way easier to lay,” Andres said. “Sandstones and limestones are typically the easiest stones to work. Most difficult is Chief Cliff out of Western Montana. It’s an argillite, just an incredibly hard stone.”

Masonry, it occurred to me, driving away from Quarry Works, is improbably a little bit like graphic design. It surrounds us, but we don’t give it much thought. To do it well takes a combination of technical facility and artistic sensibility, but the success of it lies in letting us ignore it. The masons and architects talked at various times about the play of light across the face of a rock, and about the character of different types of stone, but they were hesitant to go into detail about the particulars. Like any art form, I thought, the heart of it is probably just not that easily discussed. It’s maybe better to accept it, appreciate it … then move on.