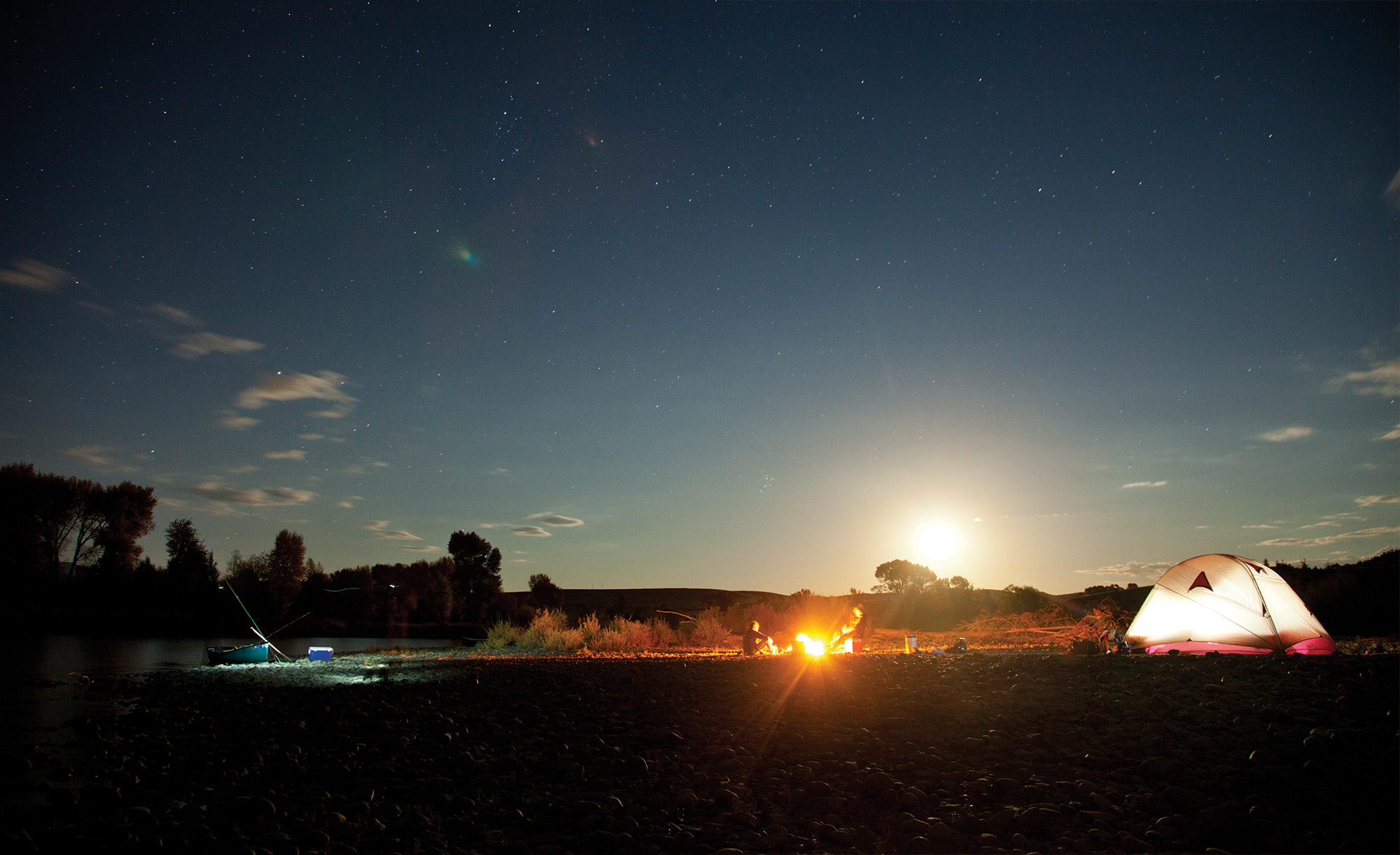 LIKE MANY ADVENTURES, THIS ONE started over a few beers at an unnamed southwestern Montana watering hole.

Sitting at the bar, I was trying to convince a friend to join me on a float of the entire Jefferson River, the somewhat lesser known of the famous Three Forks of the Missouri. It had everything we required, I told him as the beers kept flowing. It’s off the beaten path, doesn’t get much floating pressure, and the fishing can be epic. I also heard there were hot springs along the way.

Now, epic isn’t really a word that most fishermen use to describe the Jefferson. Finicky, stingy and challenging often come to mind, but I was doing my best to make a pitch for this trip and after a few beers I was now calling the fishing “epic” if that’s what it was going to take. And I’m pretty sure my friend was more interested in the hot springs, anyway.

Well, it took a few years, but we finally were able to complete our adventure last fall during a beautiful stretch of weather in mid-October. There’s something special about a nice, long, fall float in Montana, and there’s something even more intriguing about being on a river that is, for the most part, not on most people’s radar — especially for a multi-day float.

The Jefferson meanders roughly 80 miles along a broad valley floor from Twin Bridges to Three Forks. It retraces, by water, an essential part of the Lewis and Clark National Historic Trail, and several of the pioneering party’s campsites are identified along the route. In fact, the Jefferson River Canoe Trail is also the name of the nonprofit organization that promotes floating the river — the entire stretch or in parts — and is working hard to acquire property along the river for boater campsites.

Pony resident Thomas Elpel founded the organization as a way to promote the river corridor for recreation and protect it from being overdeveloped. “The essential goal is to sustain our traditions of open space and open access,” says Elpel. “The Jefferson River is floater-friendly, historic, rich with wildlife and scenic. It is a journey worth savoring and taking the time to camp out and explore along the way.”

The group recently acquired about four acres of land (called Shoshone Landing) near the old bridge just north of Three Forks, about 4 miles from the Jefferson’s junction with the Missouri. They are now working with state and local agencies to develop the site for foot and river access, including boater campsites, parking and a picnic area. “We would like to see public campsites spaced about every 10 miles along the river,” Elpel says. “Shoshone Landing is an ideal last stop for floaters before getting out or continuing on down the Missouri River.”

The canoe trail actually starts on the Beaverhead River in downtown Twin Bridges — one could actually start much further up on the Beaverhead or the Big Hole to extend the trip — and then passes by the confluence with the Big Hole just a few miles downstream to form the Jefferson. On a sunny day last October we launched a fully-loaded Wenonah canoe from the city park in Twin Bridges, not sure what to expect but fully anticipating some adventurous floating and — hopefully — some decent fishing.

It should be stated that my friend, photographer Craig Hergert, and I don’t exactly have a great track record paddling a canoe. We pretty much sank — twice — an old Coleman on the Big Hole during spring runoff and nearly drowned, while journeys down the Smith River and the Wild and Scenic portion of the Missouri River included snowstorms, frostbite, headwinds and running out of whiskey. That last one was especially problematic.

But the Jefferson with its Class I water was no match for our canoeing prowess, although the three diversion dams along the way provided some excitement. We ran the first two — where there was only one way through that included a drop into three or four big standing waves — without incident, but portaged the third which surely would have taken us out.

We knew that paddling a canoe would leave us little time for fishing, since we planned to average about 17 miles a day, but we made the most of it. I was in the stern and did my best to maneuver along the banks and slow down whenever we saw a good-looking hole. Craig hooked the first fish of the trip shortly past the confluence with the Big Hole — a surprisingly nice 14-inch rainbow caught on a big silver streamer — as the water cleared up. The next morning I reeled in another rainbow near camp; later in the day Craig finally landed one of the browns we were looking for — a beautiful, 18-inch fish that provided a spectacular fight.

Over the next four days we caught a few more browns, but none were the lunkers we were seeking. Casting along the banks and behind rocks felt promising, but mostly served just as exercise. More impressive was the wildlife we encountered. On the first night as we were setting up camp, a huge bull moose walked across the river just upstream; then we watched in awe as more than 200 sandhill cranes took off across from us as the sun was setting. Along the way we also saw mink, beaver, otters, deer, coyotes, bald and golden eagles, herons, hawks and other waterfowl. For a river that’s not far from developed areas, the Jefferson showed us more wildlife (and fewer people) than any other float I can remember.

The camping, too, was spectacular. The river level — perhaps slightly higher than average for that time of year — provided us with numerous islands and peninsulas to pitch our tent. The autumn’s first snow still dusted the surrounding mountains, and cottonwoods along the river bottom erupted with the yellow of the season. Cloudless nights made for unbelievably starry skies without light pollution, until the nearly full moon cast shadows across our camp as it rose above the mountains. Sipping whiskey around the campfire, we commented about how lucky we are that this river is right in our backyard, that we can’t believe more people don’t attempt this journey.

As for our journey, it went mostly without incident. We did have to paddle in the dark and rain after an ill-timed stop at the LaHood Steakhouse for dinner and a cold beer. Setting up the tent in the rain was an adventure, but I’m pretty sure that’s what we signed up for. And the rumored hot springs? We found those, too, but you’ll have to float the entire river on your own adventure to find them. 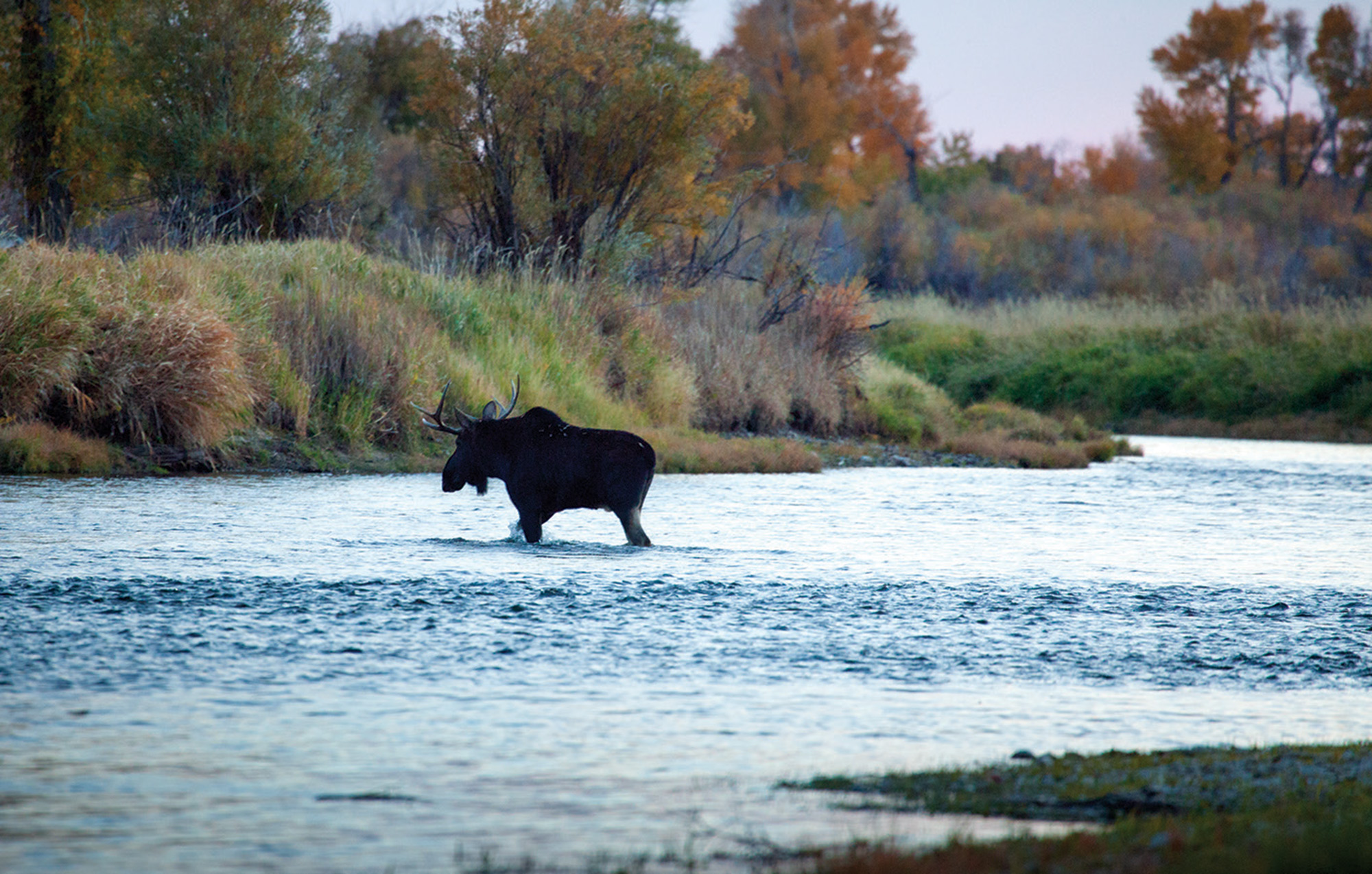 Wildlife abounds on the Jefferson, and this huge bull moose was one of a half-dozen seen on the float.

A fresh coat of October snow makes for beautiful contrast with the fall colors along the Jefferson. 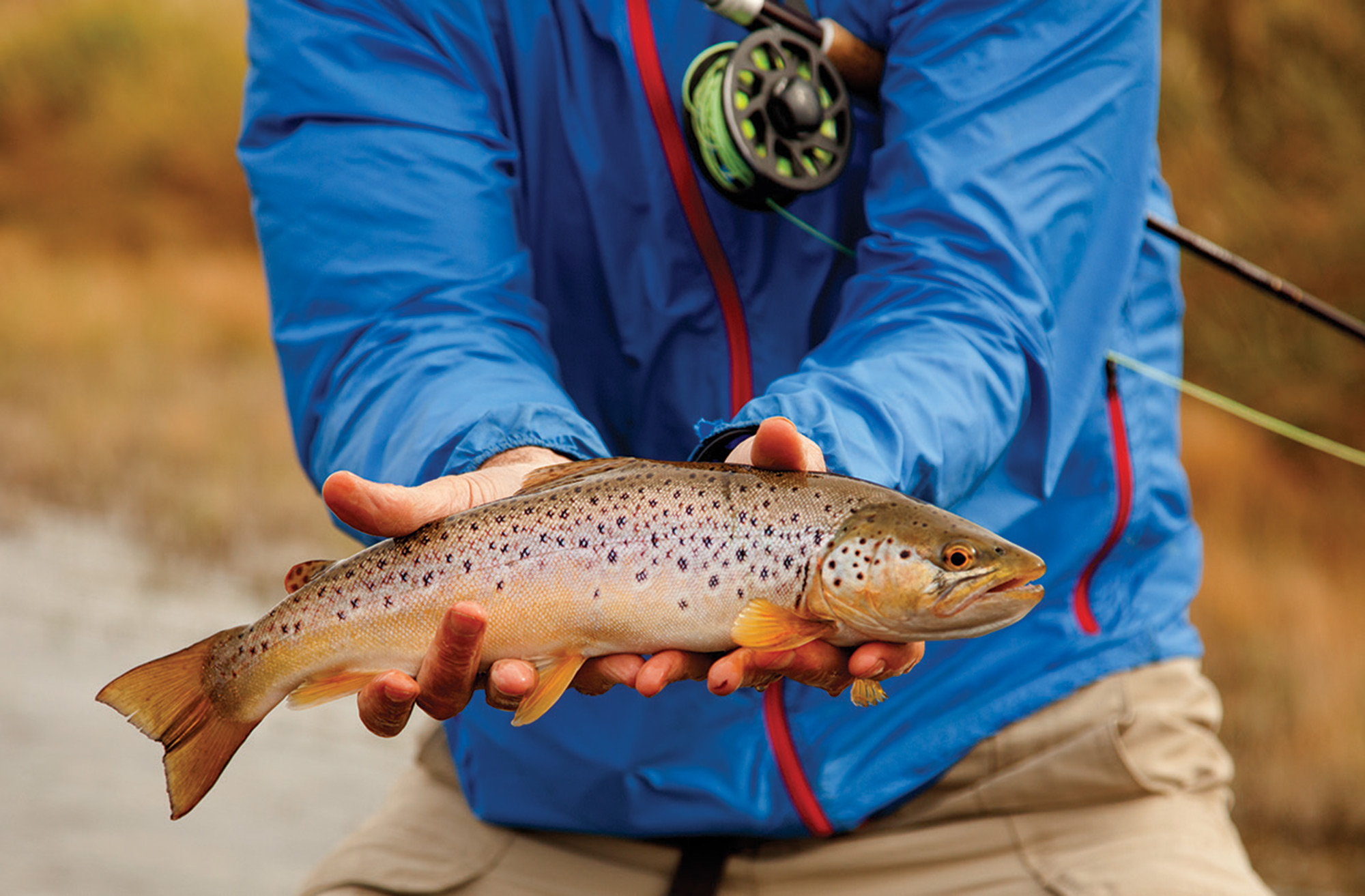 One of the beautiful browns caught during the trip. 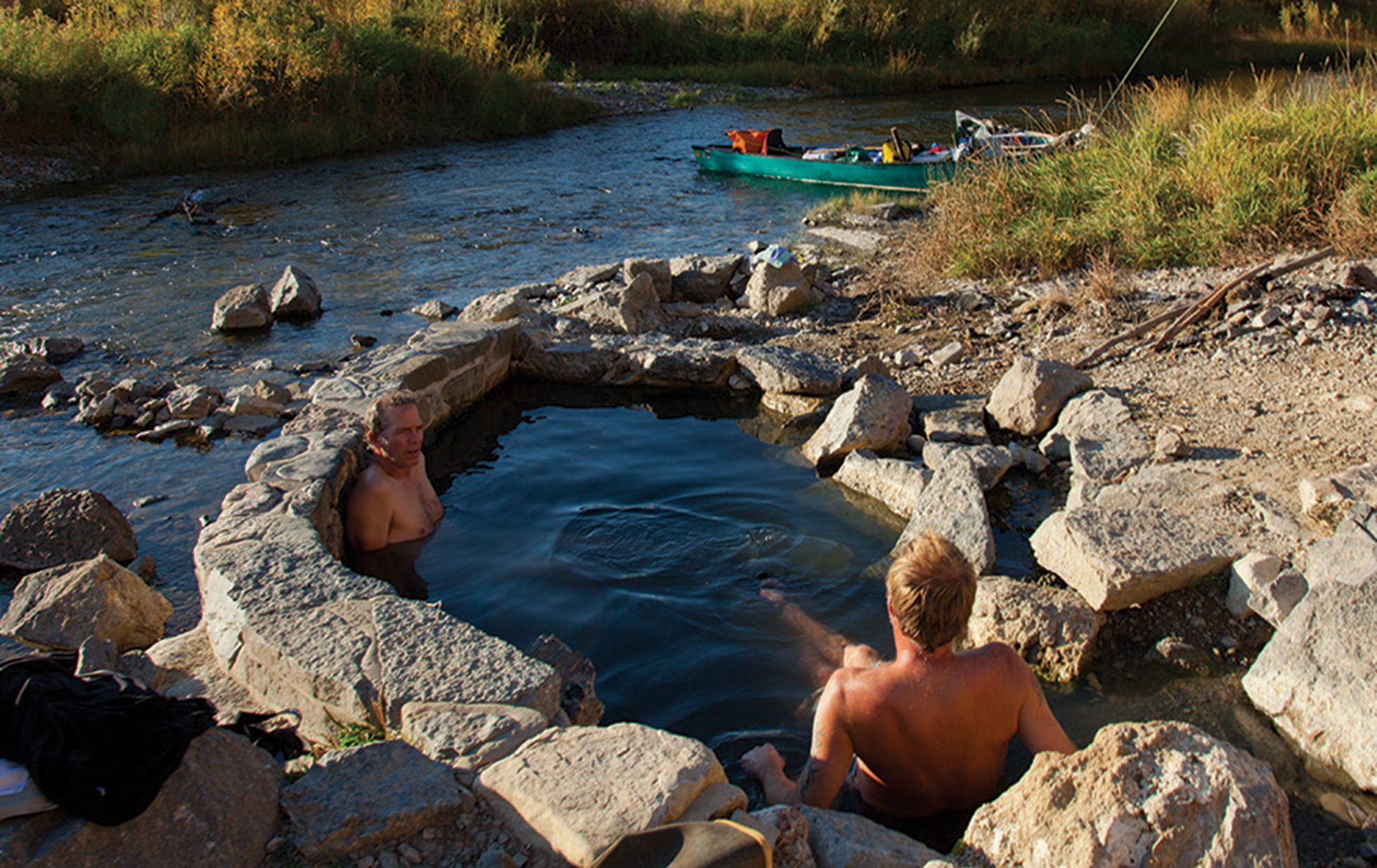 Enjoying the hot springs hidden in a side channel along the Jefferson, exact location undisclosed. 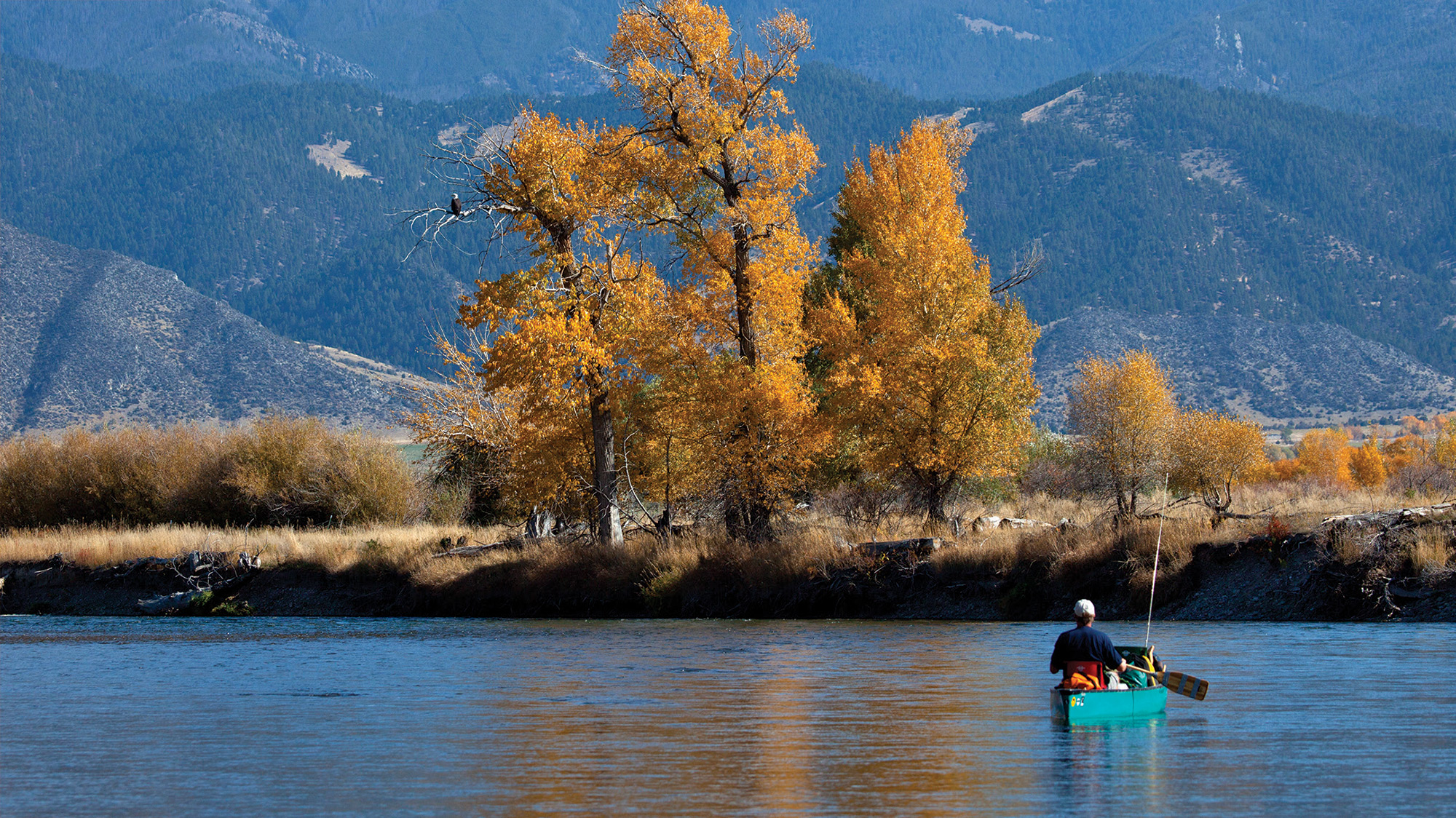 Floating by one of the numerous bald eagles seen on the journey. 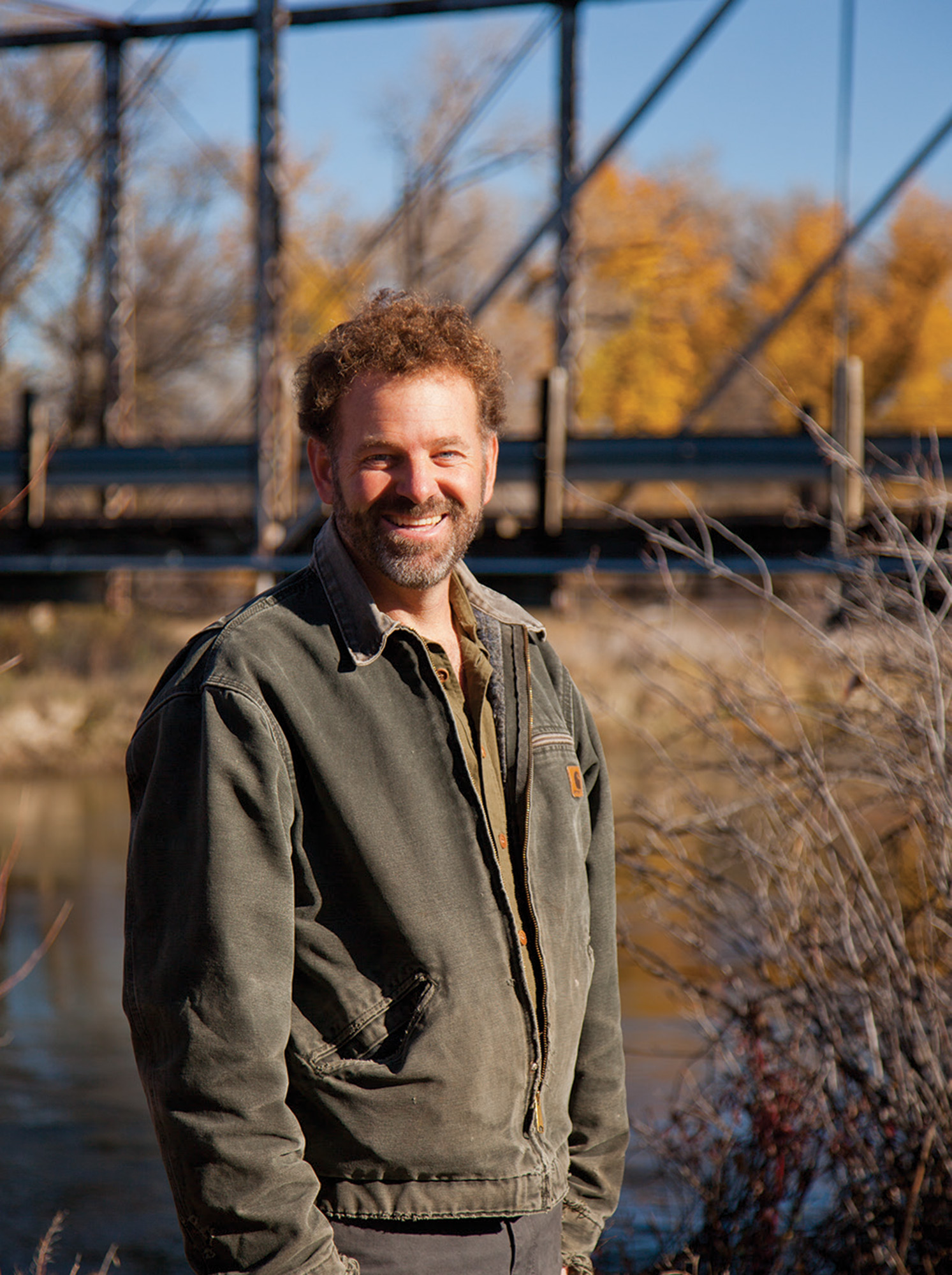 Jefferson River Canoe Trail founder Tom Elpel has been instrumental in promoting recreation and preservation along the river corridor. 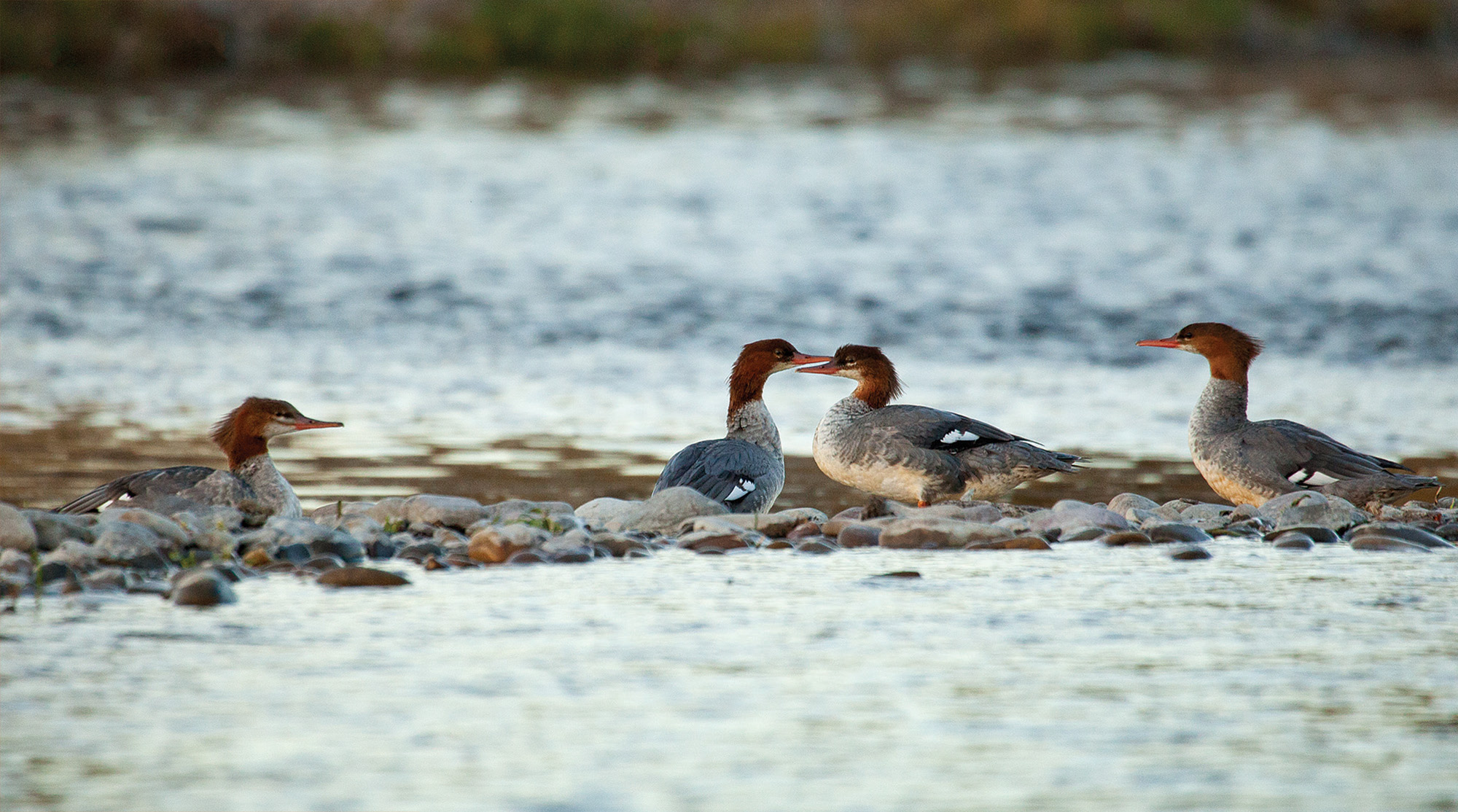 Female red-breasted merganser ducks are just one of the waterfowl species that call the river home.