Choosing to build a summer home in Ennis was easy for Charlie and Judy Blue, who came to the small corner of southwest Montana by way of fly fishing on the Madison River. It’s a route most people take to discover the agricultural town of fewer than 1,000 residents, whose lives seems to intermittently tangle with the iconic river in one way or another.

Charlie visited the area for the first time in 1969, and since then he’s missed only a handful of opportunities to return each year. “I met Ed Clark who was a postmaster but also a fly fishing guide, and his son Jerry Clark who was a builder but guides too, and Scott  — that’s the third generation now — is also a builder and a guide, and I’ll be meeting up with him to fish later today,” Charlie said. The Clark family guided Charlie and his companions through the blue ribbon stream on countless fishing trips, and when the time came, their company, Clark & Sons Construction, built a summer home that allowed Charlie to fish the Madison from his backyard.

“It’s beautiful, I’ve loved the area for so long,” said Charlie, who lives part of the year in Clifton, Texas, a town similar to Ennis in its ranching lifestyle and agricultural roots.

The Blue’s summer home is perched on the west bank of the river and is also within walking distance to charming downtown Ennis. It’s contemporary in its interiors and its orientation focuses on the river outside. A mule deer springs through the backyard, catching sight of Charlie, it juts wide-eyed in the opposite direction.

“Well that happens,” he said chuckling, continuing to recount a story of a moose and her calf that swam past their home last May. The river valley is rich with wildlife. Geese and ducks drift by and in the southeast corner of the lot, a large owl roosted with regularity in a cottonwood tree with roots that stretch like old fingertips toward the river. There was even a visiting black bear that watched Jerry Clark and his crew from a nearby tree when they were building the home in 2010. “We were up on the roof and he sat in that tree and watched us all day long,” Clark said. “He didn’t even move, just sat there and then left that night.”

Smartly designed by Carla Farnam, the 5,050-square-foot home meets the guidelines established by the Blues for their summer residence. They wanted a comfortable home that could accommodate guests and took in the view.

“Designing the house was so much fun, it’s hard to call it work sometimes,” Farnam said. The home includes ample space and privacy for guests. Each of the five bedrooms has a private bathroom, and three of the guest bedrooms are outfitted with two queen beds for visiting family and friends.

An open floor plan and a 20-foot-tall, A-frame ceiling in the great room and kitchen creates a spacious central living area. Windows are used generously throughout the home, allowing natural light and the sound of the river to filter through. A sandstone patio faces the river and wraps around the south side of the home, providing additional outdoor space for barbecues.

The Blues also sought a home that was contemporary in style and avoided the log cabin or mountain lodge aesthetic. Their daughter, Heather Blue Harkovich, who owns an interior design firm in Austin, Texas, planned the home’s interiors. The bedrooms and bathrooms incorporate a color palette of soft neutral tones, and each bedroom is finished in a different, but subtle color — either gray, blue, green, brown or cream — to facilitate guest room placement. The variation in design elements is nuanced and provides a smooth continuity throughout the home for a peaceful and serene tone. While each room is consistent in style, no two are alike, even down to the vanities and custom tile work in the bathrooms.

“My parents are very generous with entertaining and welcoming people,” Harkovich said. “So the important thing to them was that people would feel welcome. That anyone from any background would feel comfortable coming into the house.”

She delibertly used neutral tones to create this inviting feeling, as people can have strong opinions or associations with bright colors. While one person may love cherry red, Harkovich explained, another finds it too invigorating. She also looked to the landscape for her pallet, choosing cream because of the snow and rich browns to reflect wood from nearby trees, among others.

Harkovich arranged the furniture in the great room and kitchen so that there were individualized areas for entertaining in one central space. This way, people could be separate, but still together in the same room.

“My cousins came down last summer for Fourth of July,” she said. “And there were 18 of us at the house, literally, and there was plenty of room for everyone to hang out and socialize in that room — it never felt too small.”

The value of this summer home is not found in non-essential details. Rather it’s firmly rooted in the beauty of the landscape and a willingness to share that with others. The result is a home designed for spending time with family and friends. A home that facilitates lasting memories for grandchildren who will spend warm summer days floating in inner tubes down the Madison, and where friends will stay after reeling in the rainbow worthy of bragging rights. It’s a home that reflects an appreciation for the river that’s been a landmark on Charlie Blue’s heart for nearly 50 years. 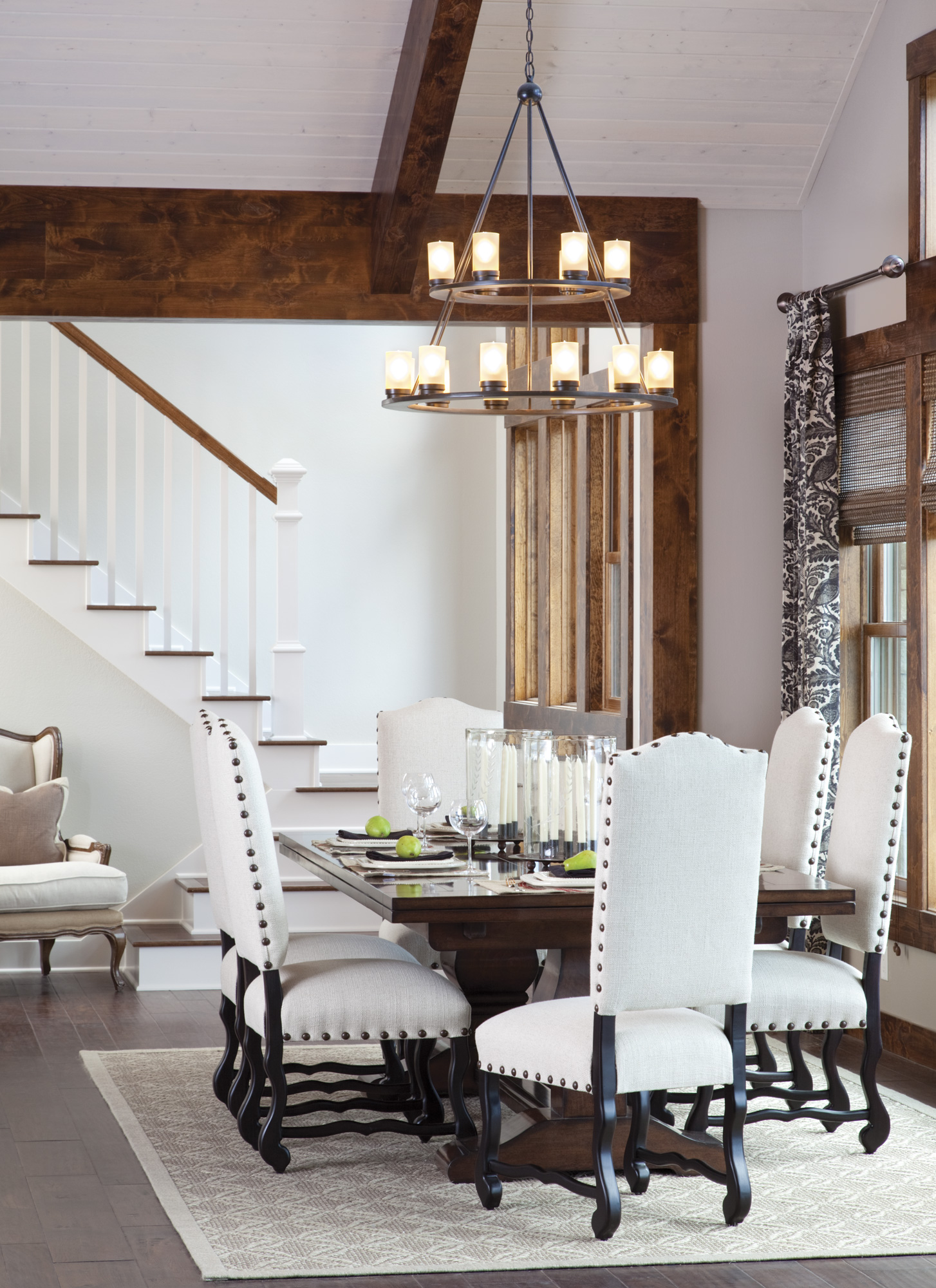 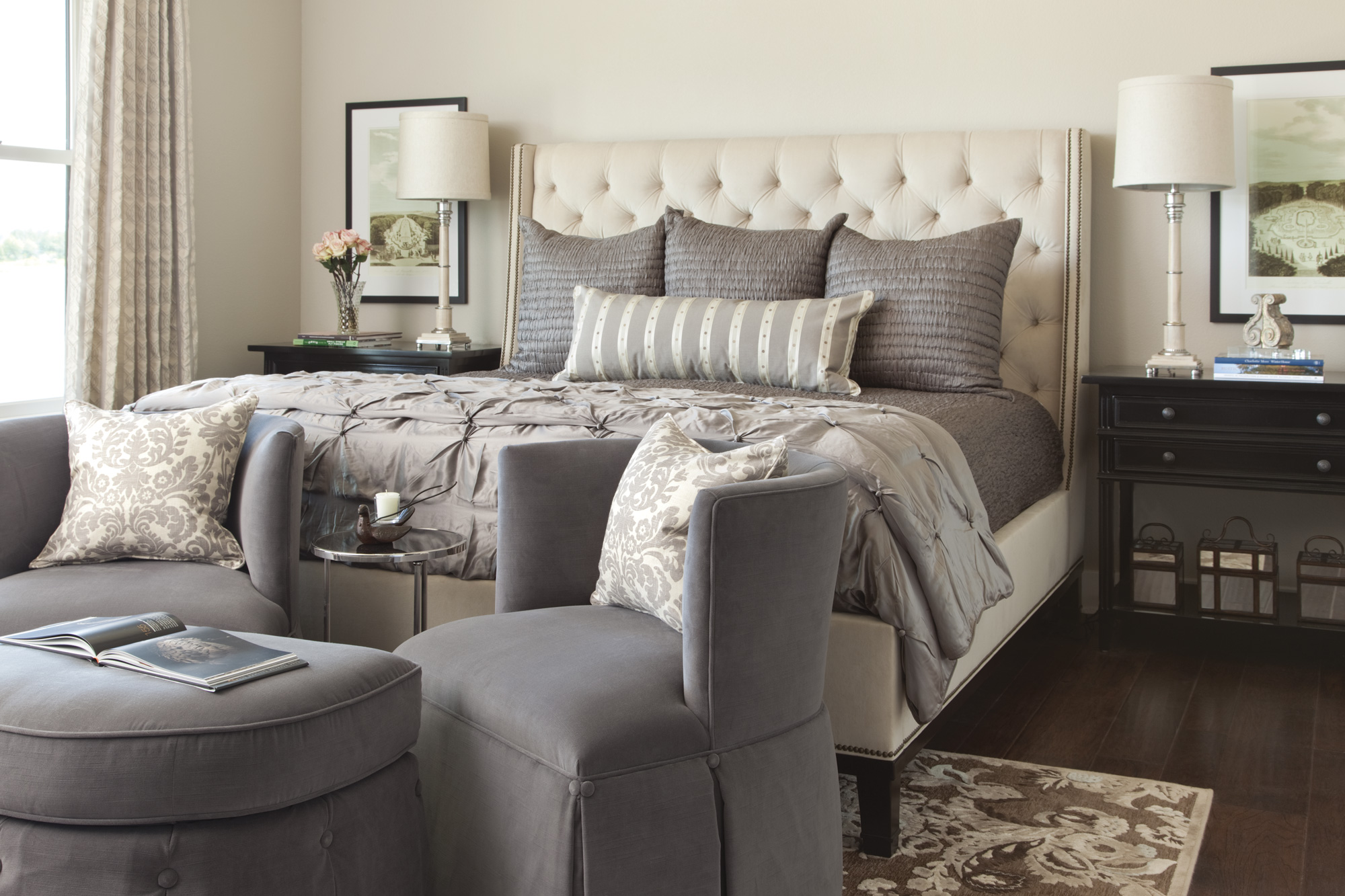 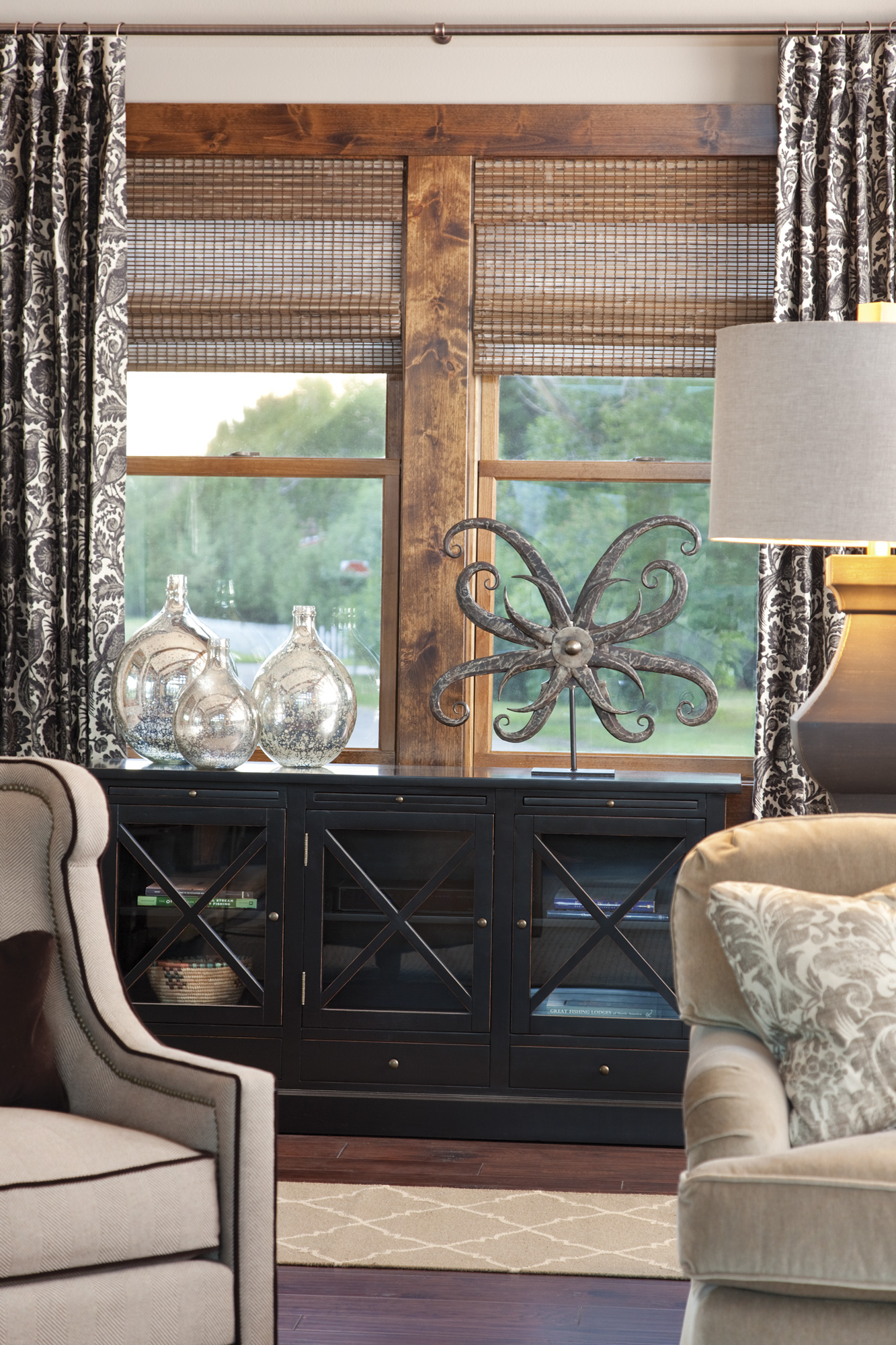 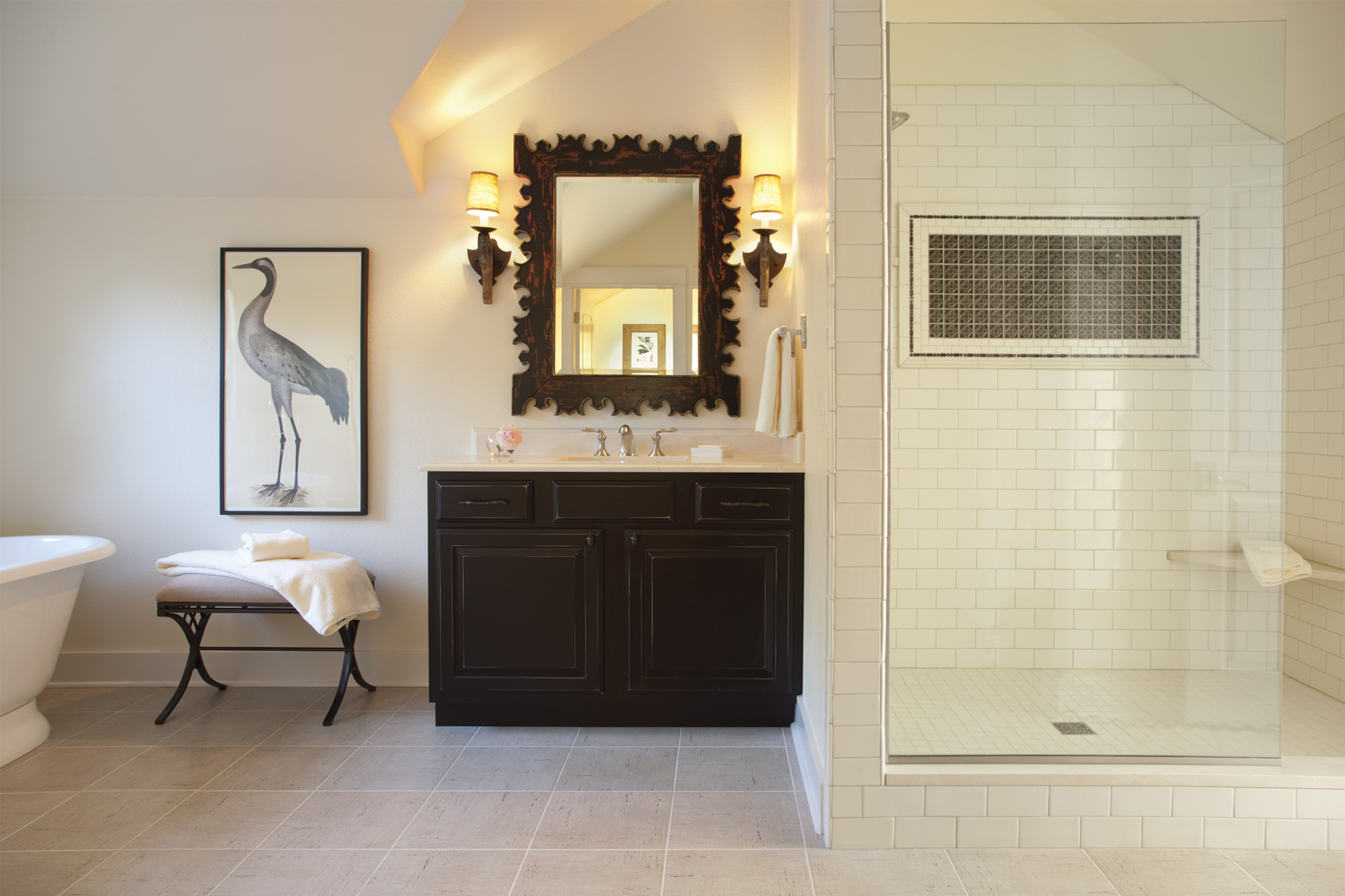 Each guest room has its own bathroom to allow for privacy. Unique design elements and hand-picked details give variety to every space. 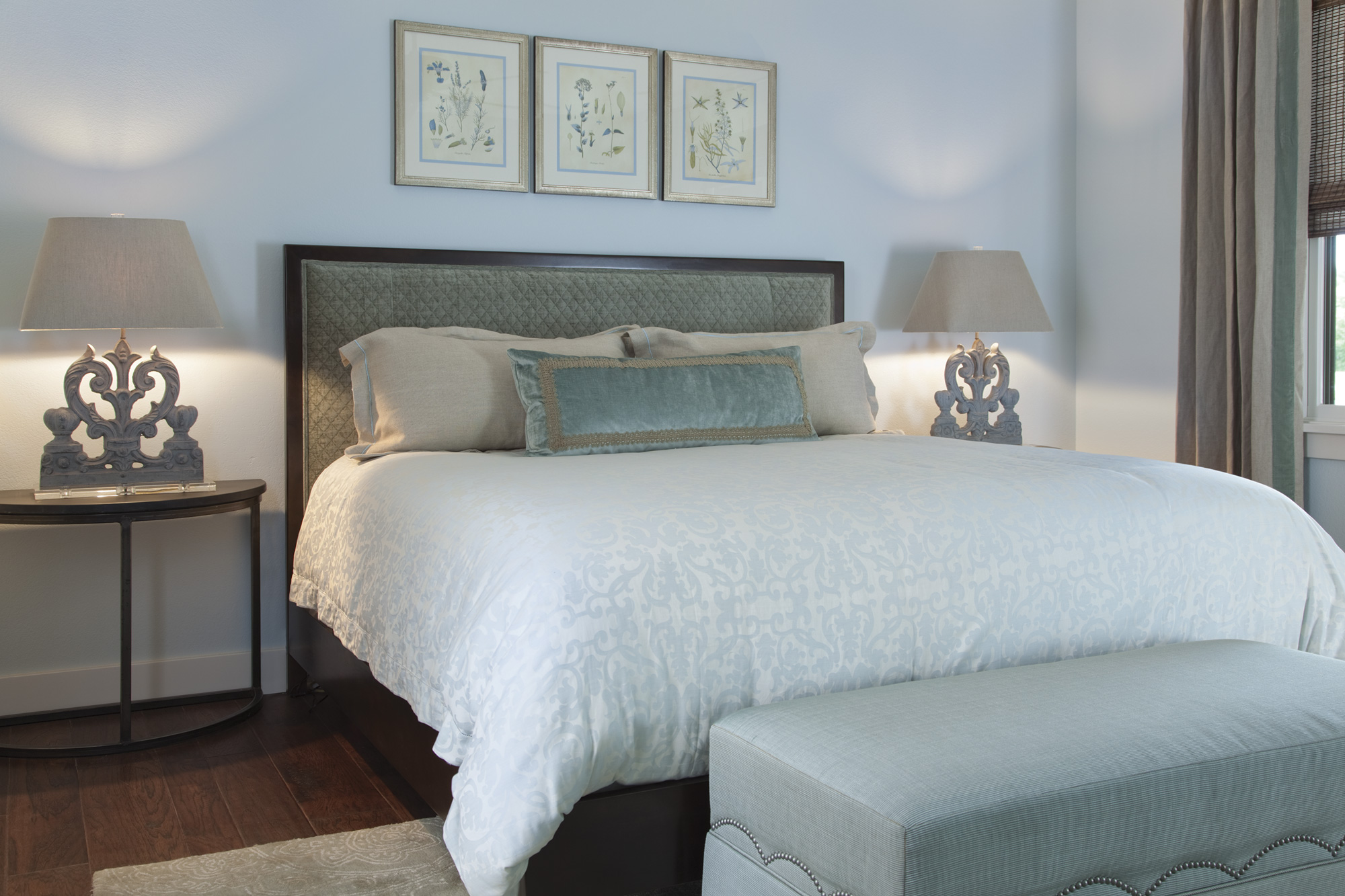 Neutral tones remained common throughout the home, with subtle offsets of color as seen here in the blue room. Homeowner Judy Blue desired a warm and inviting look that said “Welcome.” 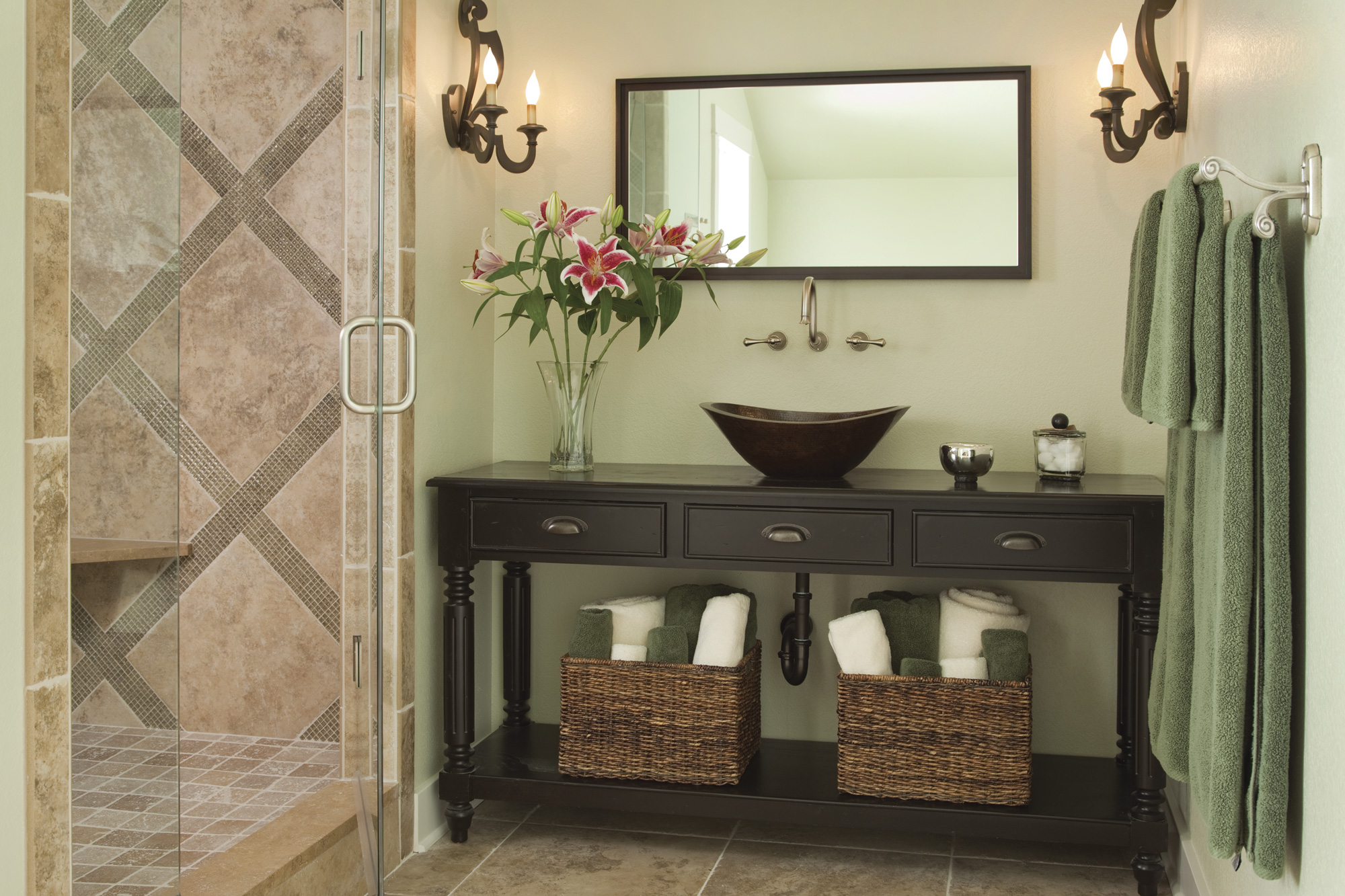 Jon Farnam, of Bozeman Hardwood and Tile, installed the flooring and tiling throughout the home, including the uniquely patterned tiles in each shower and bathroom. 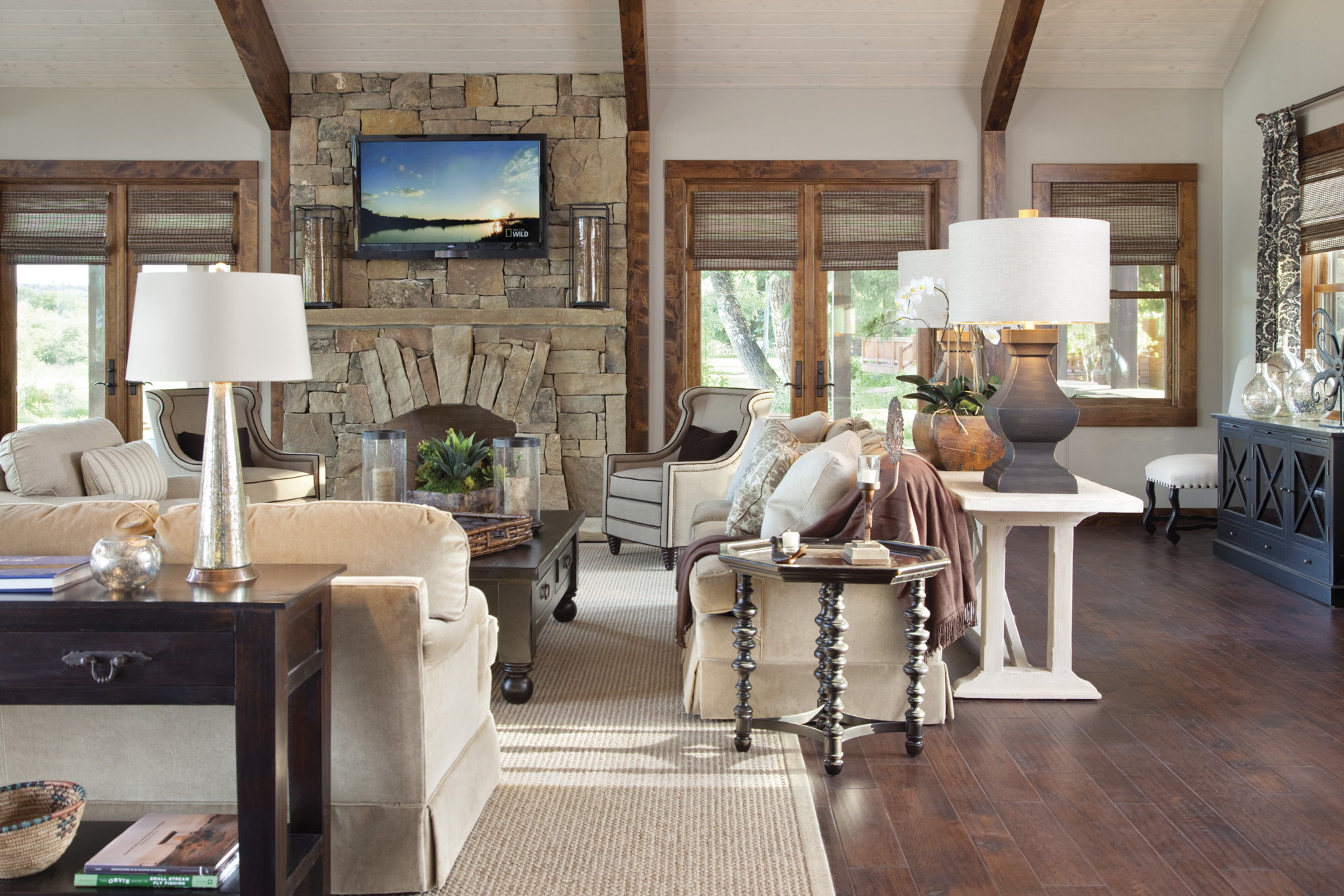 Interior designer Heather Harkovich incorporated furniture with texture materials, such as velvet and linen, to add diversity to the living room. She also included traditional lines, such as the English-arm sofas and chairs. Custom rugs from Merida help s 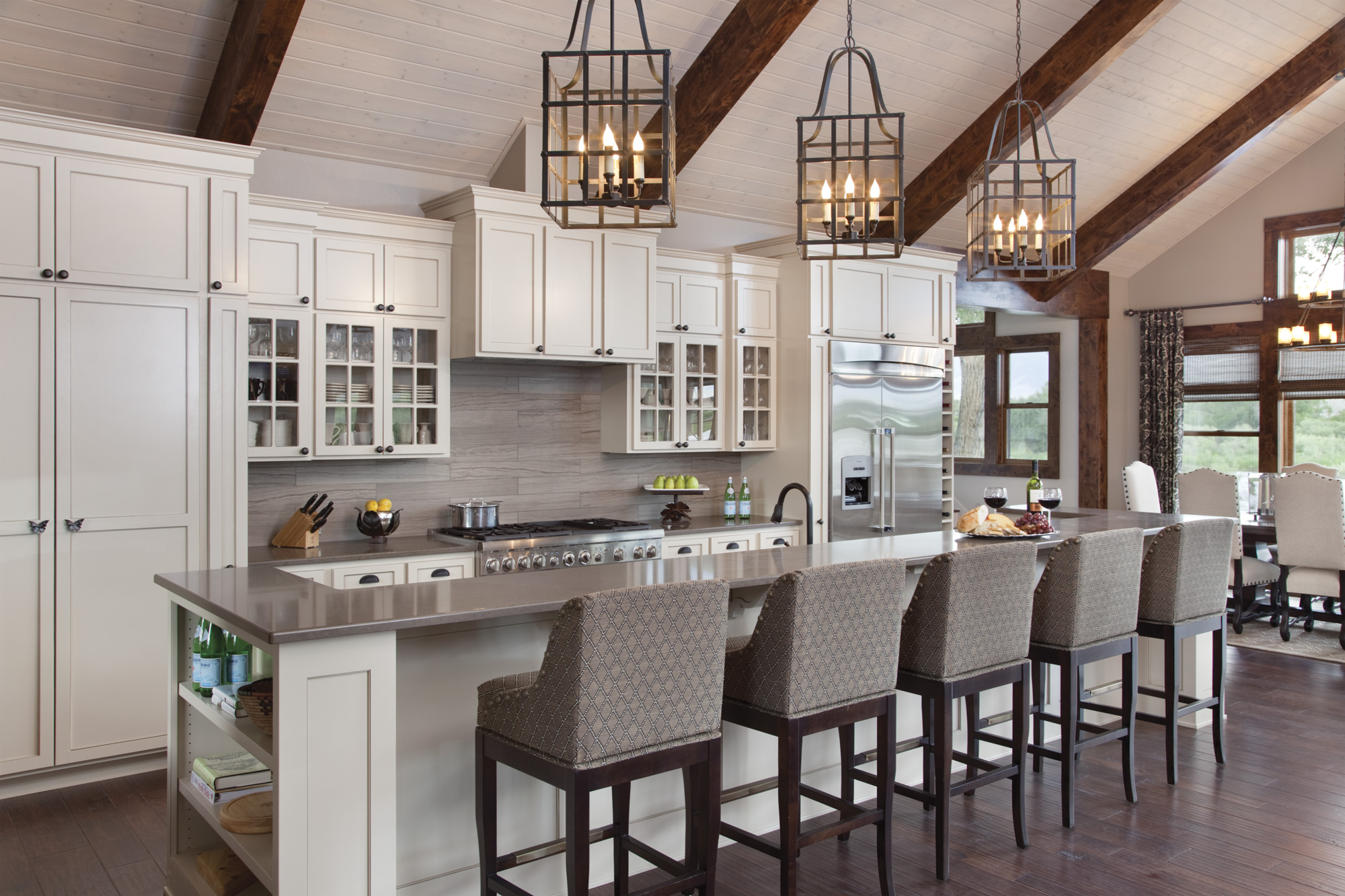 The kitchen’s design was a collaborative effort between Steve Farnam and Heather Harkovich. In the kitchen, custom cabinets — made of painted maple and designed by Steve Farnam — Caesarstone counter tops, a custom copper sink and a 16-foot bar provi 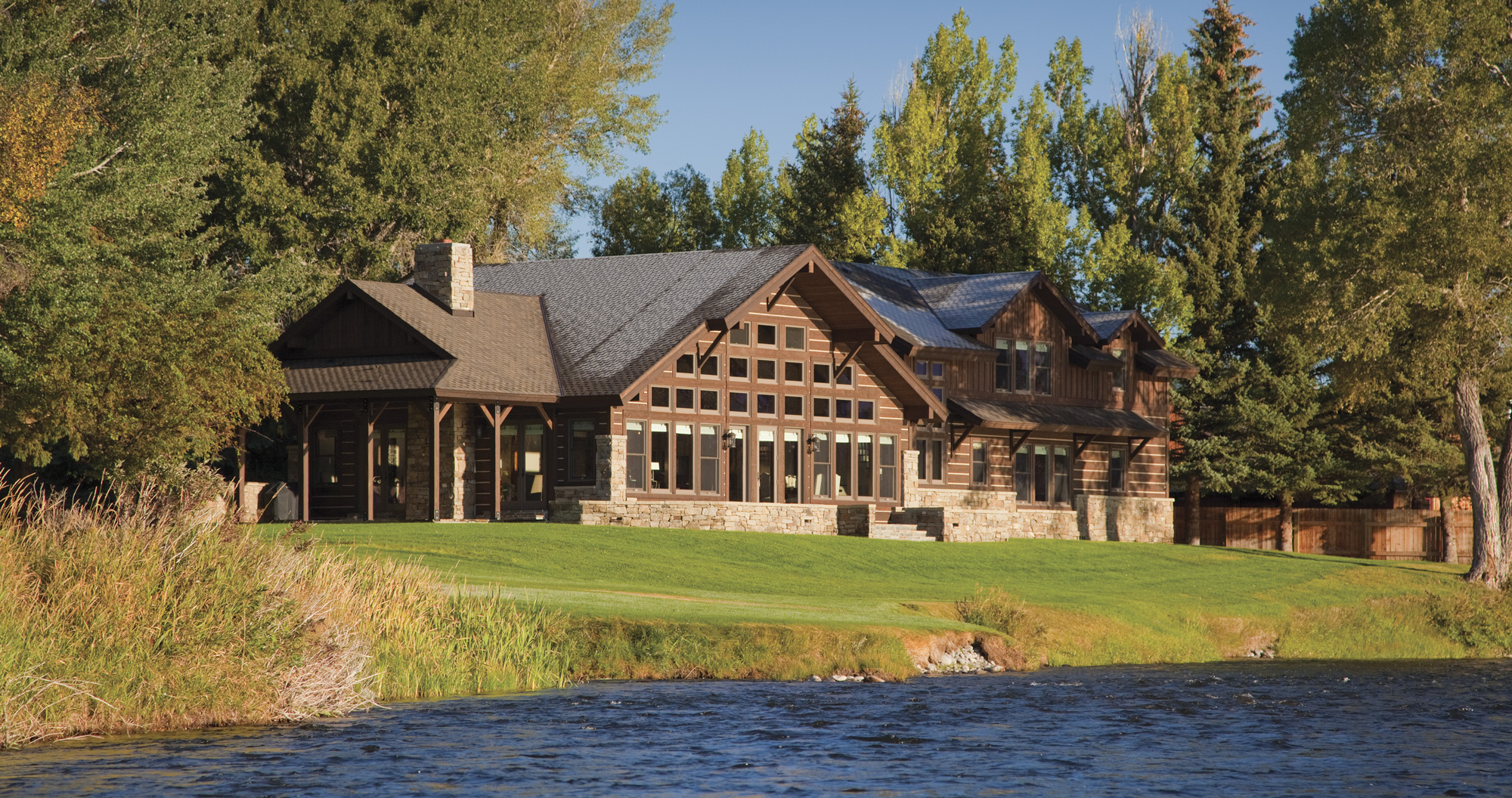 The Blue residence sits quite literally on the banks of the Madison River. Charlie Blue often puts-in upriver, casting and catching along the way, until he is dropped off at the bank below his home. The home’s exterior features unique rooflines and is b