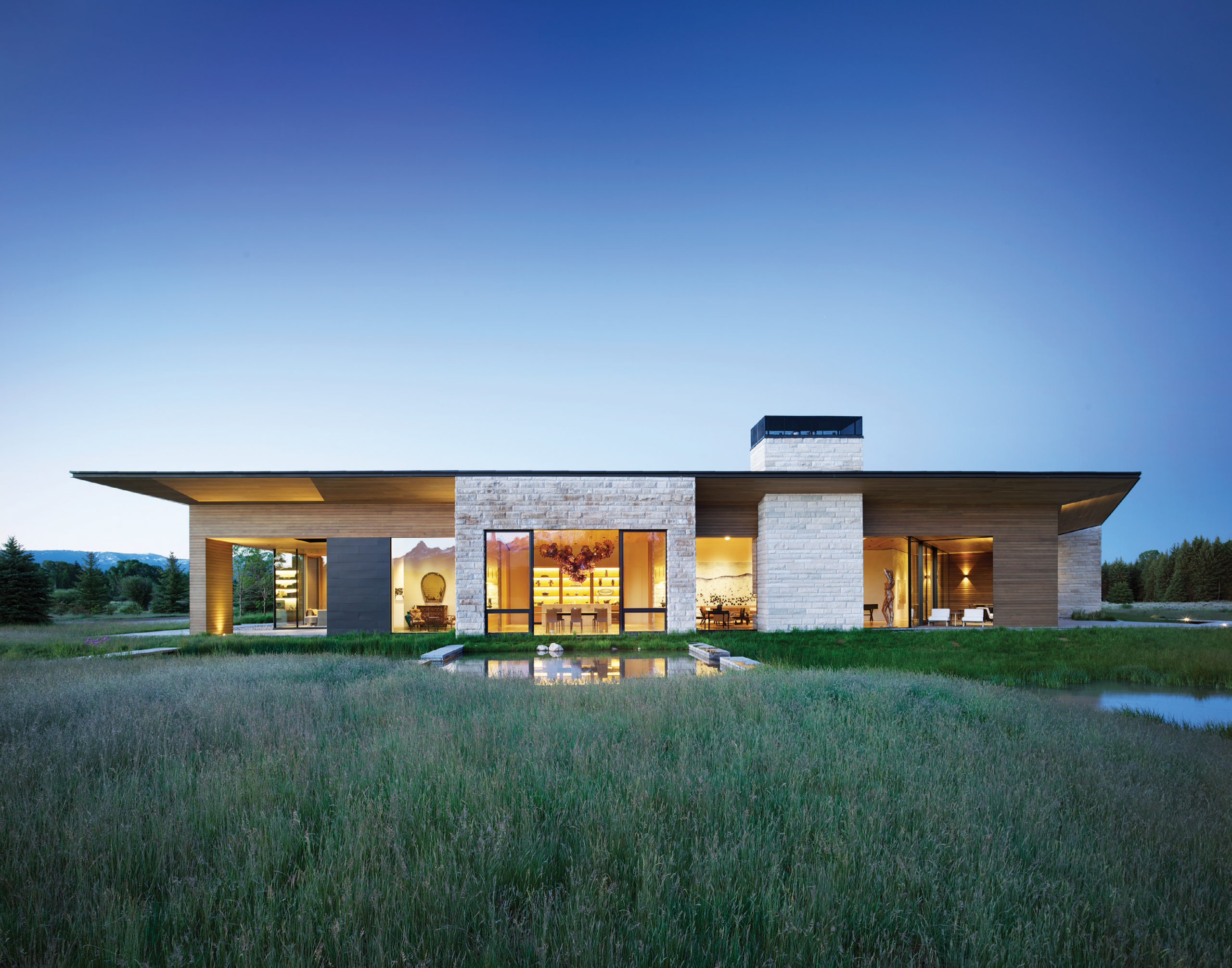 Lefty Ranch takes its shape — and full advantage — of the waters that embrace it. The home’s long, low profile, capped by a thin roof and elements of wood, stone, and glass, fit into a landscape that consists of both flatlands and mountains.

ONE OF THE MASTERS OF WILDLIFE ART IN THE U.S. once suggested that Northwest Wyoming is an area of angles born of elevation, aridity, and the sun’s illumination. So it was an elegant accomplishment when the combined genius of architects, builders, landscape designers, and homeowners created a structure in the same region with an essence that’s shaped by water. 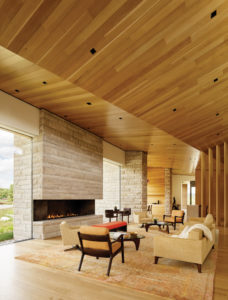 The living room fireplace is a focal point, floating on a glass wall, while the ceiling tips up to capture the south light. Wooden louvers stand between the living area and the kitchen to create a subtle structural divide.

What’s most notable about Lefty Ranch — a residence that follows a horizontal line framed by limestone, glass, and wood — is its mutability in a landscape that once formed part of the Snake River drainage. It’s a house that contains, at once, all of the seasons and expresses each of them in turn, anchored by materials of weight, yet appearing to be light as air and float on the waters of a man-made pond that acts as an anteroom to the building’s central entrance. 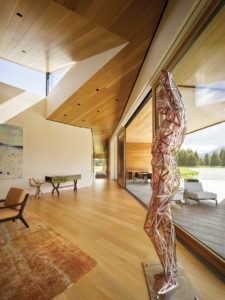 The interior placement of Samantha, a sculpture by Julian Voss-Andreae, finds the statue with its back to the building’s main terrace, echoed by an exterior twin placed outside of the master bedroom.

All of this home’s magic would be entirely absent had landscape architect Mark Hershberger, of the Jackson Hole, Wyoming-based Hershberger Design, not suggested reworking the location of the house to bring together — in perfect harmony — the structure and the central water feature. Consequently, the house takes advantage of the pond and the water that flows through irrigation ditches, serving as a reminder of the original ranch that once spread across this sagebrush plain in the shadow of the Tetons. It’s a convergence that Hershberger says “responds beautifully to the site.” 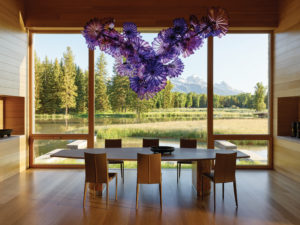 A custom chandelier by Dale Chihuly graces the home’s airy dining room, which is anchored by a custom wooden table. The views from the window frame the Teton Mountains in the background.

With a primary orientation to the north, the home takes full advantage of the views, so much so that there’s barely a perceptible separation between the art of nature and the art of man. “Every line has a purpose, every part of the form of the building has a reason for its orientation, sequence, and access,” says Hershberger, whose minimalist landscape design relies heavily on native grasses.

This house is yet another triumph for CLB Architects, with design studios in both Jackson Hole and Bozeman, Montana. Imagining and executing projects in two of the West’s most visibly stunning locations — where wrought beauty is prized as an homage to the natural landscape — CLB sets its aims high and often exceeds them. 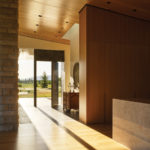 The front entry features a custom pivot door that provides a view to the front porch and beyond. 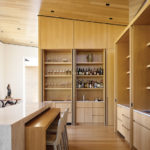 Custom millwork adds warmth to the kitchen and bar area. 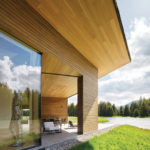 A generous overhang floats above the main terrace, tying together the structure and roof, ceiling and floor.

Lefty Ranch, named after a longhorn steer whose old age saw him ornamented with a single left horn, has retained the character of the former cattle operation and its people. Eric Logan, a CLB principal, explains that the home was strongly influenced by the timelessness of the agrarian buildings still on the ranch, notably a loafing shed and a historic cabin. “We borrowed very heavily from the form of those structures,” he says. “They’re not fussy in their shapes; they’re simple and robust.” 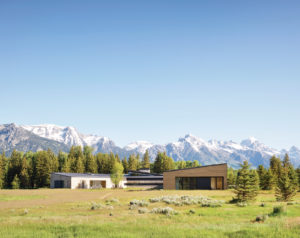 The interior of Lefty Ranch is similarly spare in its aesthetic, an approach that underscores its elegance. It’s a string quartet instead of a brass band, a carefully crafted poem by Alfred Tennyson rather than the emoting of Rod McKuen, it is a Turner as opposed to a Kinkade.

The building’s boomerang-like shape belies its division into essentially two elements: the front of the house and the back. The front component optimizes views, light, and the life of the house, while the back embraces spaces dedicated to more utilitarian pursuits, such as laundry and storage. 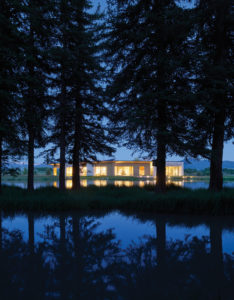 Lit amid oncoming darkness, the house appears as if it’s on an island, surrounded by water.

The house has a single bedroom, a crowning kitchen, and an expansive fireplace, all expressed in what Logan describes as a limited palette of materials. And the horizontal structure complements rather than challenges the surrounding mountains. “We created a very long, low profile, which seemed appropriate for the plains, and which did not compete with the Tetons,” Logan says.

The structure is a triumph of synthesis where none was likely to be achieved; that is, it’s a contemporary structure in a historic setting; a retreat from the busyness of the era at a time when such activities appear to imply accomplishment; the mirror, rather than the image, in which all that can be postulated about beauty is reflected. 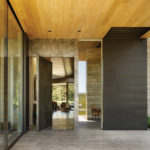 The covered porch at the home’s entry is matched in artistry with a custom pivot door that features acid-etched steel. 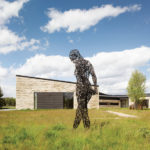 A twin image of a sculpture in the home’s interior sits outside of the master bedroom. This statue by Julian Voss-Andreae is aptly titled Samantha in the Meadows. 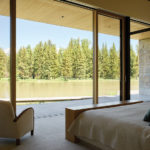 The spacious master bedroom opens to views of the water and the surrounding meadow.

John Jennings, owner of Peak Builders in Jackson Hole, says that the project required shaping all of the limestone onsite, including chipping it to give a pillowed effect. The Case Windows, a leading design element, were matched with heavy glass lift-and-slide doors.

Features that tie the interior to the exterior include quarter-sawn white oak cabinetry in the kitchen, white oak floors, and wooden louvers that Logan describes as a kind of sculptural divide separating the kitchen from the living area. 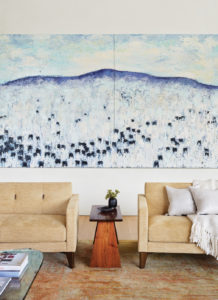 The angular arrangement of seating in the home’s living area is softened by the curving ridgeline in a Theodore Waddell painting that ornaments a wall without overwhelming it.

In a house that needs no introduction, there is a living detail that speaks strongly of its owners’ desire for a familiar and beloved natural addition. That is the autumn blaze maple tree standing at the back of the house, and which will forever be known as “Miss Idaho,” since it was purchased from a woman who held that title.

For such time as can be measured, Lefty Ranch stands as a tribute to the place where human understanding meets that of something greater.