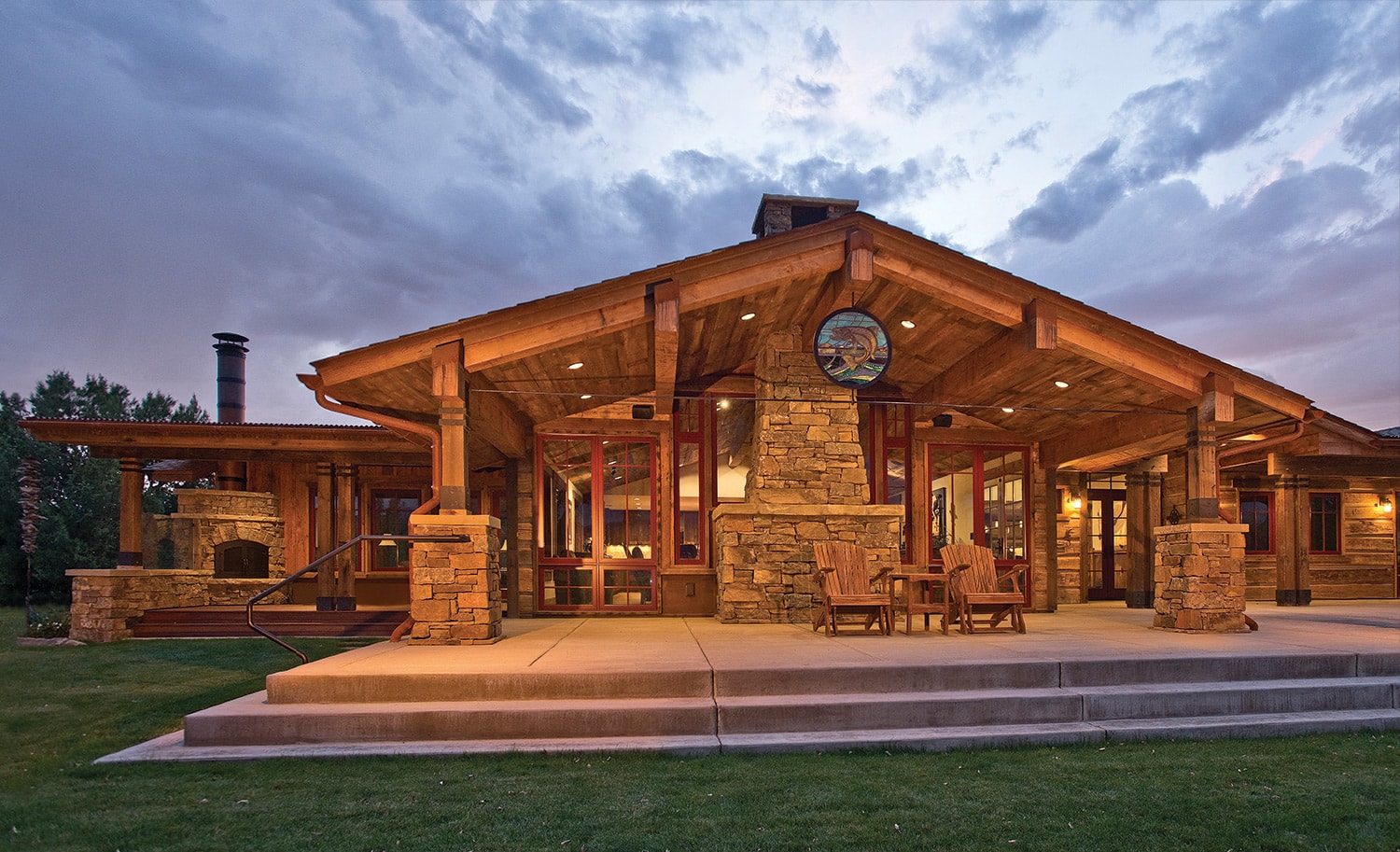 The home was designed to include plenty of outdoor space so the Hagemans could enjoy their proximity to the river and the mountain views beyond. The stained glass rainbow trout hanging above the patio was designed by David Fjeld, and is indicative of the homeowners’ effort to imbue the home with its own artistic character.

WHEN LOOKING FOR INSPIRATION for the remodel of their new home, Jim and Beth Hageman knew there was no better influence than nature — especially because their recently purchased property was located right on the Madison River near Ennis, Montana. 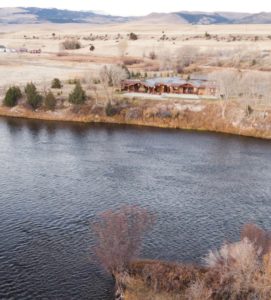 As avid fly fishers, the Hagemans appreciate the location of their remodeled home on the Madison River. Stone steps lead from their backyard to a natural fishing access. The home is oriented toward the river and the mountain views, offering an immediate, visual connection between the indoors and out.

“There truly is an incredible history on the land itself,” Beth Hageman said. “And we had this vision that we wanted to build something as timeless as the river and the land it was on.”

The original home was built in the 1970s and “definitely needed to be bulldozed or would require a lot of work,” she said. But its location was perfect, and the homeowners had a vision for what could be. “We took a chance, and we bought it,” Hageman said. 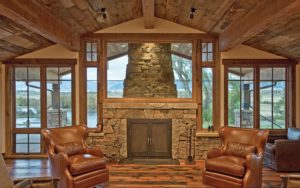 Working closely with Frank Cikan of Cikan Architects, and Wesley Mills of Yellowstone Custom Country Homes, the couple set out to create a home that was artistic, had a strong connection to the outdoors, and paid homage to the history of the landscape and its setting. The result is an updated, cabin-like structure built with reclaimed wood in the original footprint. The Madison River, which is visible from every room in the remodeled home, became a primary motif for the architecture.

“It sounds strange maybe, but the river was the main factor, because it gave us a sense of a flow throughout the house,” Cikan said. “That was the main theme for the house — correct the flow and be one with the river, because the site is beautiful.” 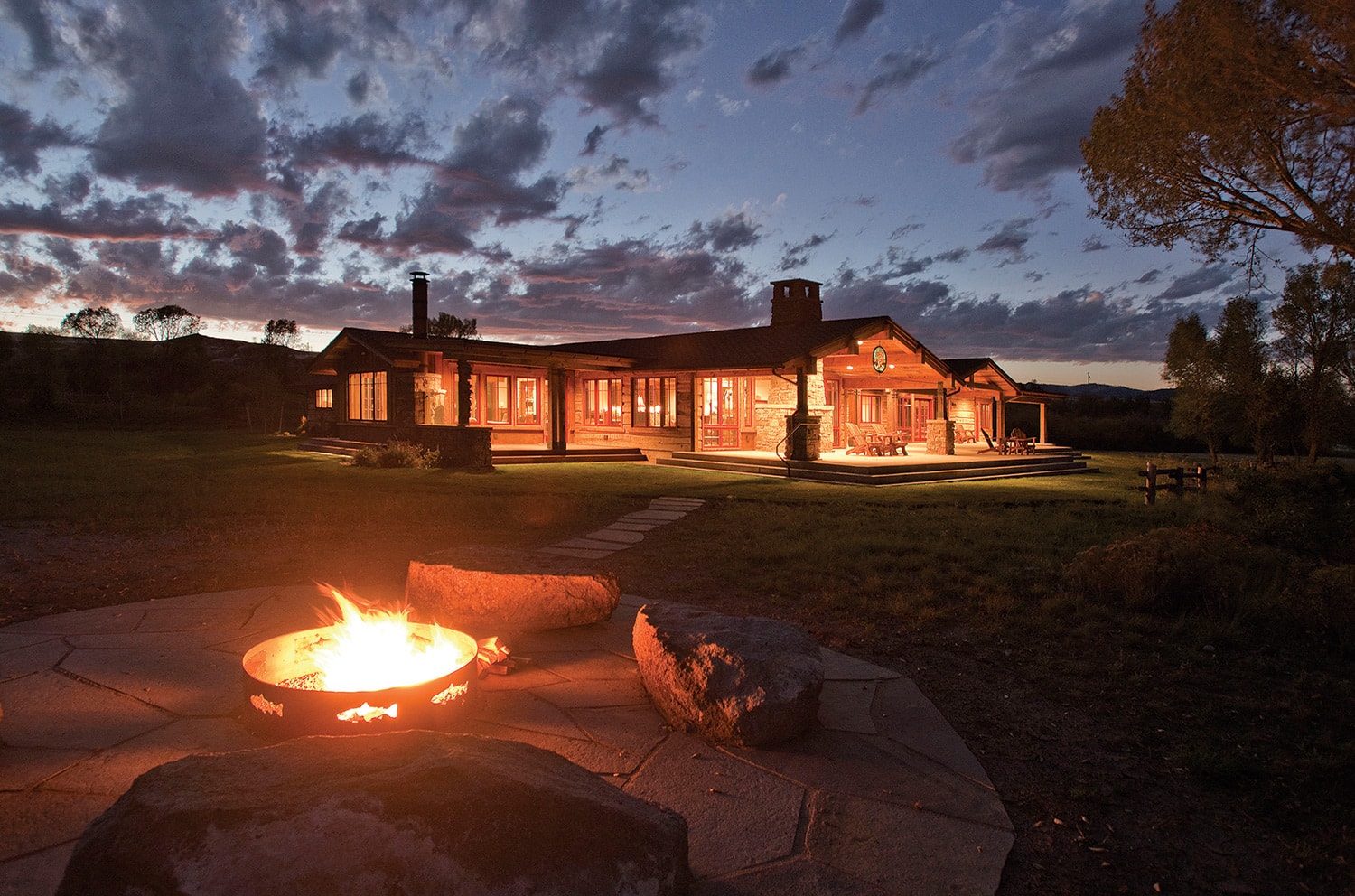 The Hagemans worked with Cikan Architects and Yellowstone Custom Country Homes (YCCH) to design a structure that looked as though it was there for decades. “From beginning to end, it’s such a transformation that basically by the time they were done with landscaping, you’d think the home had been there for a 100 years and generations of people had the opportunity to enjoy it,” said Wesley Mills, with YCCH. The landscaping was designed by Big Country Landscapes.

In addition to its proximity to the Madison, the house sits just south of about a dozen teepee rings. The property is under conservation easement, which drove the remodel in both overt and subtle ways. The easement required that the roofline stay the same height, and the home couldn’t be much larger. But it motivated the Hagemans to design a structure that looked like it had always been there, a home that acknowledged the beautiful place in which it was built with a low profile, and materials that blended with the environment. 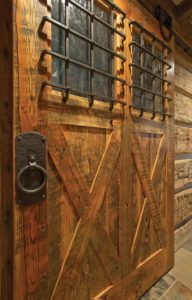 Misty Mountain Woodworks handcrafted architectural details throughout the home, such as this sliding barn door. 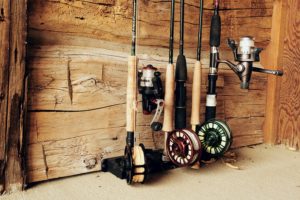 “When you purchase a property under conservation easement you become a new ambassador of the property,” Hageman said. “I felt a strong sense to honor what was here before, including the soul of the [former] house. I think the standard now is to come in, clear land in this beautiful state, and build something you want: a trophy home. And I think it’s so important to step back and say, ‘What really belongs here?’ It’s important to conform to what’s here … to consider what enhances the beauty of the land around us.”

The remodel kept the bones of the 1970s home, but took it down to the two-by-fours and rearranged the layout. The original building included a garage at its center and a mother-in-law suite located off of that, which created a problem with the circulation throughout the house. Cikan transformed the floor plan to be one continuous space, reconfiguring these disparate areas so that they flowed from one into the other.

The resulting three-bedroom, four-and-half-bath house is about 3,600 square feet. Each room has access to the outdoors, and the remodel also added about 2,200 feet of outdoor space with decks and patios. 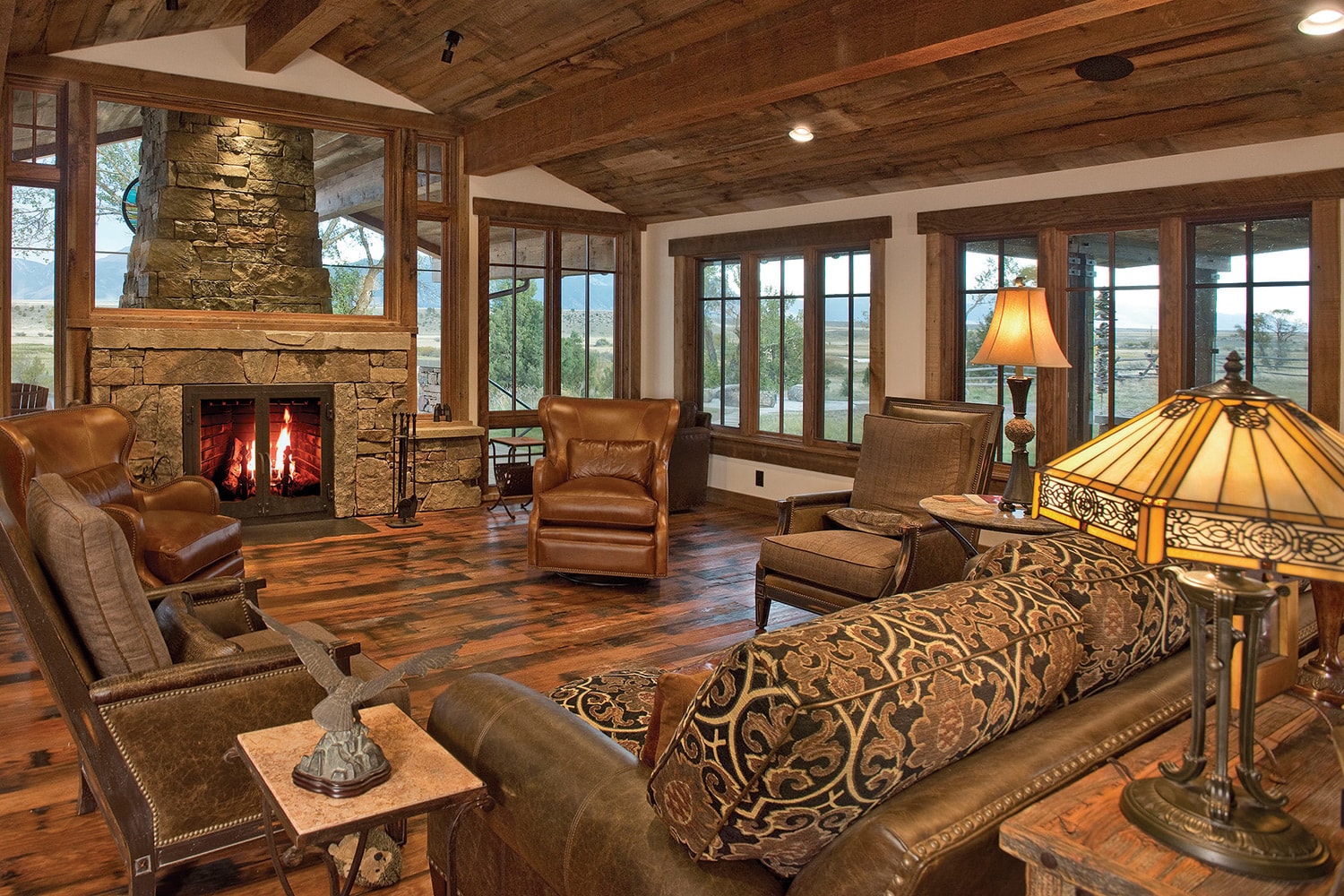 Beth Hageman said her favorite aspect of the home is that it is comfortable to live in. Cikan Architects and Yellowstone Custom Country Homes designed everything, from the furniture, built-in cabinets, and lighting fixtures to the custom gates outside.

From the home’s front door, there’s an immediate visional connection to the mountains and river. “We basically put in a glass wall, so as you open the front door you are looking into Montana,” Cikan said. 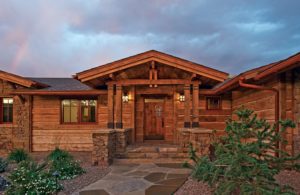 The home is unrecognizable from when the homeowners first purchased it. 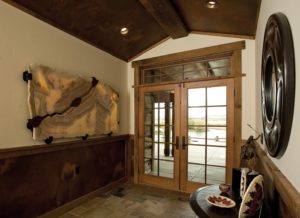 A light fixture was created from a broken stone slab to mimic the currents of the Madison River.

Completed in 2015, the home is configured in an L-shape with the length paralleling the river, Mills explained. The master bedroom, which includes a 20-foot addition, is located on one end of the house and overlooks the concrete porch and the river. “We tore the roof off the master section and made it a cathedral-vaulted ceiling instead of the flat ceiling. And then we did the same thing in the entryway,” he said.

From the master bedroom, there are offices on both sides of a hallway that leads into the open great room, kitchen, and dining area. Off the living room, Cikan added a sunroom with a small kiva fireplace, and a porch where the homeowners could sit and look at the Madison Range and River. Down another corridor, there’s a laundry room plus two guest suites that were slightly enlarged. 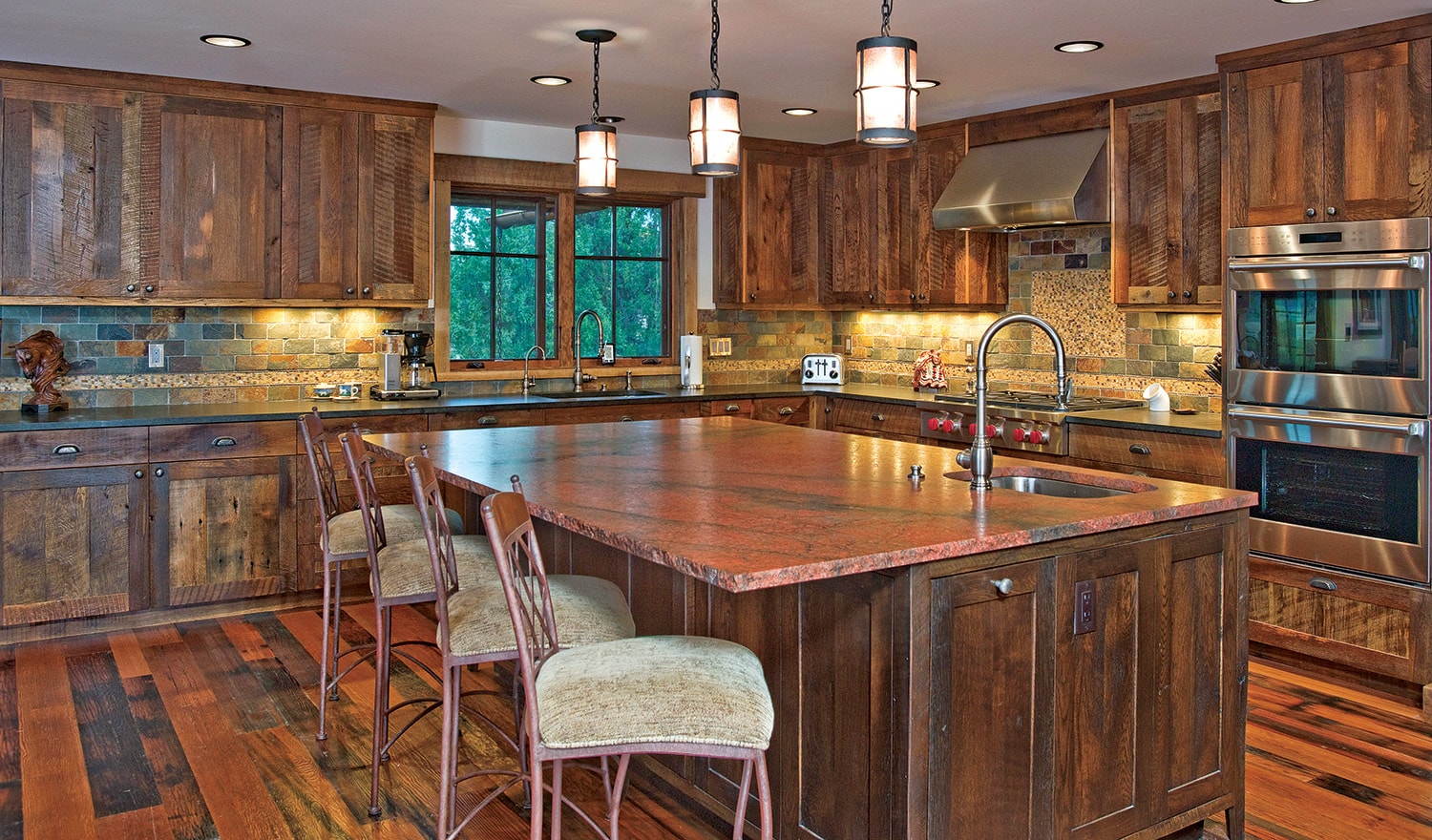 YCCH specializes in using reclaimed materials, such as the oak found in the kitchen. Before beginning the project, the Hagemans interviewed three contractors and found Wesley Mills’ enthusiasm to be contagious. Mills then recommended that they work with Cikan Architects.

“One thing we wanted to do was make the structural connection a visible part of the design and that’s expressed in how the house is put together and held up,” Cikan said. “So there is very special metalwork in the house and unique patinas — things like that. The metal fabricator [Scott Hutzler] hand-made every piece of metal in the house.” 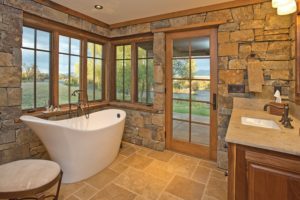 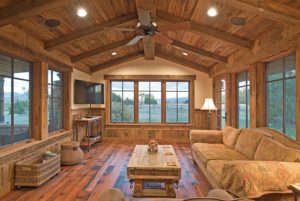 The collaborative effort led to a residence as unique as its location. “I would like to extend a heartfelt thank you to the contractor, architect, and all of the craftsmen that worked like artists in the creation of our home on the river,” Beth Hageman said.

The home incorporates reclaimed wood throughout, with a majority of the timbers coming from a mill in British Columbia. “All of the siding was hand-hewed, mixed hardwood to mimic the old-style dovetail logs. And then that theme was carried inside too; all of the ceiling was a reclaimed barn board,” Mills said.

The floors throughout the home are a mixed-grain fir, reclaimed from Hines pickle vats. “When they first placed it, you could really smell the vinegar,” Hageman said.

The Hagemans also kept details from the original 1970s home, such as a few brass fixtures and the kitchen cabinets, which now hold fly-tying materials.

“The history of the wood we were putting in the house played along with the history of the property and the river,” Hageman said. “If the house could talk, everything would have a story of where it’s been. And it continues to live on.”

The river theme is expressed not only in the flow of the home but also in the artistic touches found throughout. A stained-glass trout, designed by David Fjeld, hangs above the back patio and was based on a photo of a fish Hageman caught. A light fixture in the foyer was made from a broken stone slab to mimic river currents, and even the backsplash in the kitchen was designed to have motion and movement to it. In the master suite, a wood carving of trout in a stream is surrounded by stones to look like it’s meandering through a waterway across the fireplace. 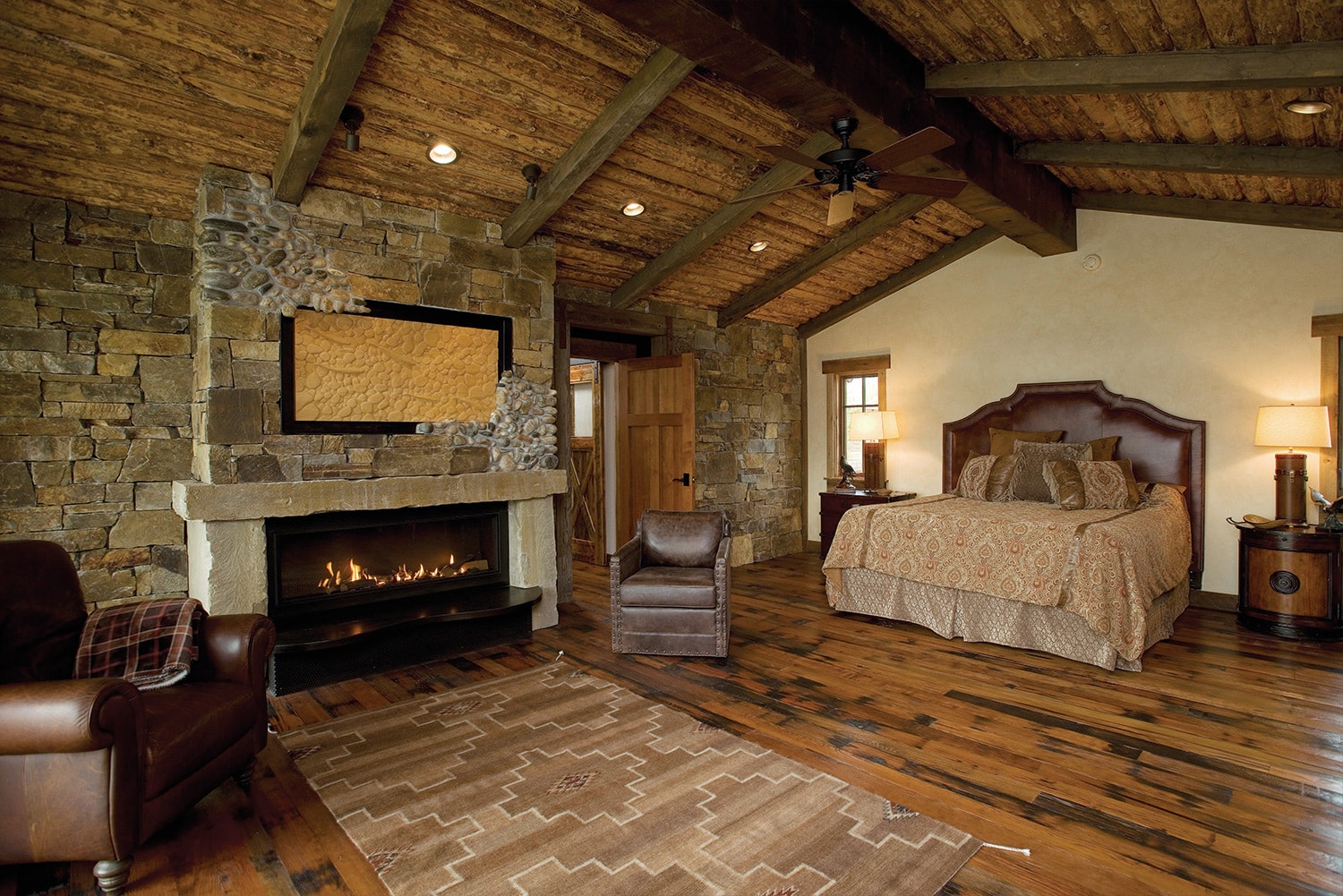 The large vertical and horizontal slabs in the fireplace in the master bedroom weigh about 5,000 pounds. YCCH had to first fortify the foundation and then build a trolley system to maneuver them into place. A carved wood relief and the surrounding stones imitated the river bed, adding continuity in theme throughout.

“I’ve learned to fly fish, and I think you are always learning to fly fish. But I realized the river is so much more than just fishing,” Hageman said. “It’s timeless. It’s like life. It keeps moving along, and it has personalities. In the winter, it’s gorged and has this incredible eerie sound of ice breaking, and in the summer, it’s lighter and playful. You come to appreciate that. And it really is a part of the architecture. From the moment you walk in the door, you see the river.”

One of the simplest ways to determine if a structure will stand up against the test of time is to identify its relationship to the landscape. By that measure, it seems that the Hageman residence is here to stay.