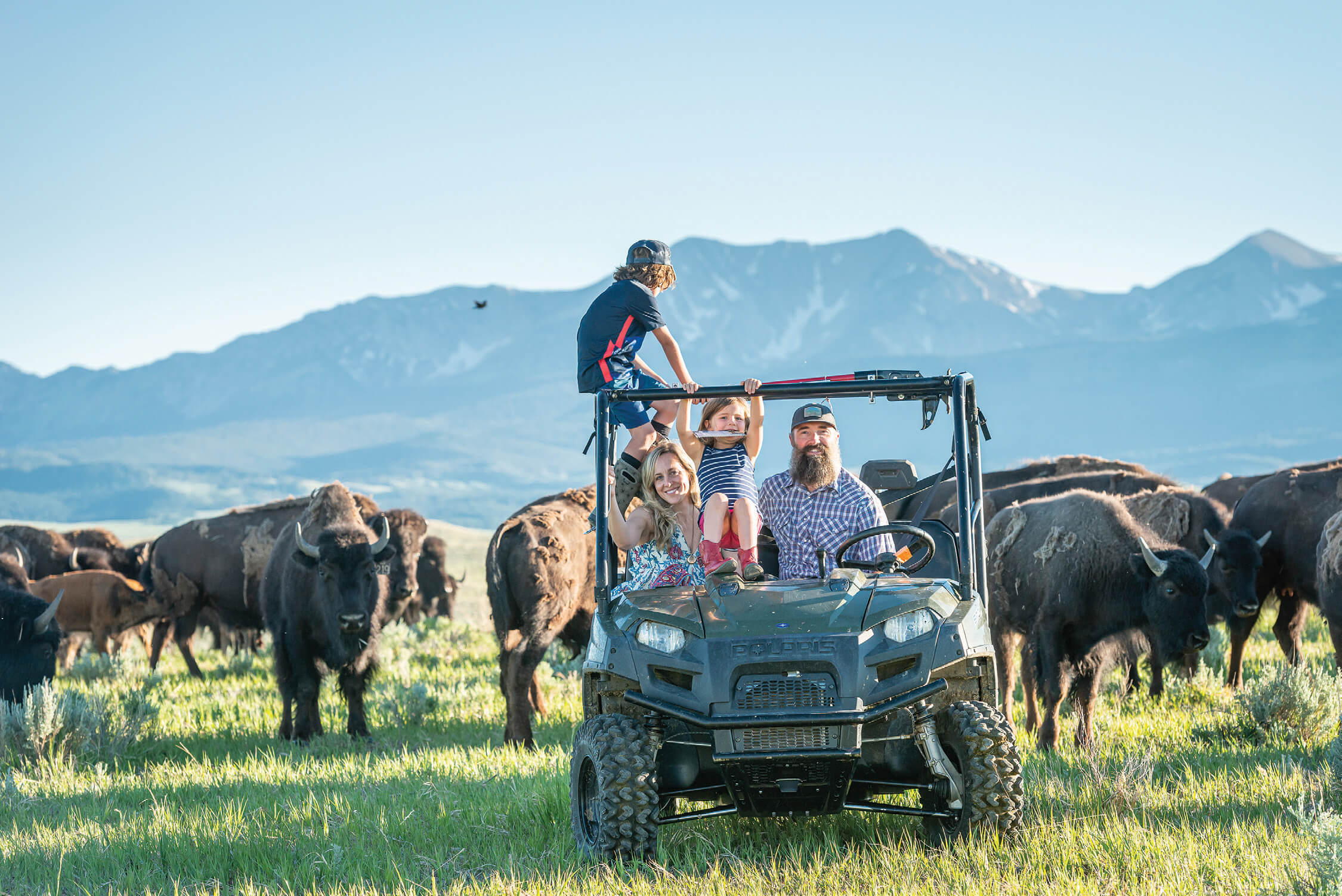 The whole family — including their kids Greta and Otto — help with the business, and they just moved to the ranch full-time in June 2021.

28 Sep Ranching in the New West

It’s a long journey from Chicago to rural Montana. Most would say it’s an even longer one from an office job to ranch work. But when Matt and Sarah Skoglund embarked on that particular journey, they ended up at a destination they’d never imagined. While living in the city, Sarah worked as an interior designer and Matt as a lawyer for a large firm. Today — in stark contrast — they’re both ranchers, as the owners and founders of North Bridger Bison near the small town of Sedan, Montana. 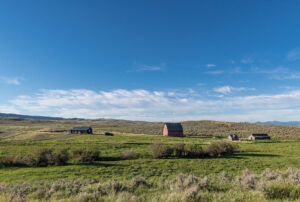 Matt and Sarah Skoglund found their ideal property near the small town of Sedan, Montana, and launched North Bridger Bison in 2018.

Matt was raised in the suburbs of Chicago and was attending law school when he and Sarah started dating in 2004. “I’ve loved nature and the outdoors since I was a little kid,” he recalls. “When I was in high school, I did a NOLS [National Outdoor Leadership School] course in Idaho, and then I spent a lot of time in Montana during and after college and through law school. I fell in love with Montana. I knew I wanted to live here, and I didn’t want to wait until we were older.”

Sarah, on the other hand, grew up in the heart of Chicago, where sidewalks and tall buildings were more plentiful than nature. “We did have a plot of dirt in front of the brownstone where we planted annuals,” she recalls. But through visits to her great-grandfather’s farm in Michigan, she says she “grew up with a reverence for the farmer and a reverence for agriculture.” Through adventures of her own in her late teens and early 20s, and then others with Matt — such as learning how to hunt and fish — Sarah had evolved into an outdoor lover as well.

The couple married in 2008 and moved to Montana a month later, where Matt worked in environmental policy for the Natural Resources Defense Council for a decade, eventually becoming the director of their Northern Rockies headquarters in Bozeman. Much of his work for the organization involved bison management in Montana and Yellowstone National Park, but he eventually realized it wasn’t his dream job. “As much as I believe in environmental policy work and advocacy, I was really craving something conservation-based and land-based that was more tangible,” he says. “I’m a big food person; I love to hunt for meat, garden, and look for morels.”

In 2016, Matt read an article about a conference in Big Sky that focused on bison ranching. “I thought to myself, ‘Bison ranching would be so cool for someone who could do that, but obviously that wouldn’t be me,’” he says, explaining that he was mystified as to how one might start a ranch with no land or agricultural experience.

A herd of about 150 bison roams a couple of square miles of grassland comprised of the Skoglund’s own property and acreage leased from neighbors. North Bridger Bison follows a methodology that allows the animals live as close to their natural state as possible, and they field-harvest to minimize stress.

A year later, Matt picked up Buffalo for the Broken Heart: Restoring Life to a Black Hills Ranch, a memoir by South Dakota rancher Dan O’Brien. He read with fascination as the author described transforming a longtime cattle operation into one that focused on bison and pioneering new methods. Instead of loading the bison onto trucks and sending them to slaughterhouses — a stressful event that not only affects the animals’ wellbeing but also the taste and tenderness of the meat — O’Brien harvests his in the field. No stress for the bison means no stress in the meat.

Matt describes it as an instantaneous light-bulb moment. “When I learned about field-harvesting, I thought, ‘This is what I want to do,’” he says. “I didn’t want to load bison onto trailers and send them off to be confined in a pen and then slaughtered. For bison, the stress would be through the roof.”

Matt knew that if they started their own bison operation, they would handle things differently. And that’s when the couple got serious and started looking for land.

Bison are hardy animals that, over thousands of years, have evolved to handle Montana’s harsh climate. They breed and calve on their own, and, with thick coats that protect them from freezing temperatures and harsh winds, they don’t need to be checked on during winter storms. For the Skoglunds, this seemed like a good fit, and they started North Bridger Bison in 2018 on the western side of the Shields Valley. In the heart of an agrarian ranching community, it was the first and only property they looked at, but they instantly felt they “belonged” there.

“We found a needle in a haystack,” Matt says. “The land had been on the market for quite a while, and we saw potential where others didn’t. We just found this really special piece. There’s a diversity of grasses, sagebrush, forbs, and wildflowers, with the North Bridger Mountains just above the ranch, and the Crazies on the other side of the valley.” The wide-open valley, flanked by mountain ranges, also had abundant water sources — with multiple springs, two ponds, and two year-round creeks. “It’s classic, iconic bison country,” he adds. 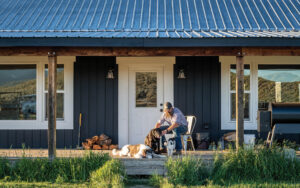 Matt takes a break on the porch of their home, a former schoolhouse, with the family dogs Aldo and Darby and cat, Walter.

They run one herd of about 150 bison (including calves and yearlings) on a couple square miles of grassland, made up of their own property and some leased acreage from neighbors. Matt and Sarah don’t vaccinate, move, or handle them unless it’s necessary. Matt, who does most of the pasture moves by himself, explains that he “pulls” them rather than “pushes” them, and since they are familiar and comfortable with him, the bison typically understand what’s happening. Once he gets the attention of the lead animals, and they follow him through the gate, the whole herd tags along. It’s a moving sight, and as Matt says about a lot of things related to his life on the ranch, it never gets old.

Through North Bridger Bison’s ranching practices — which are rooted in holistic management and regenerative agriculture principles — the ecosystem benefits as well. Raising the animals in sync with nature helps the environment by improving the quality of the soil, increasing the amount of water that’s retained in the ground, and fostering greater biodiversity. And by increasing the soil’s ability to store carbon, they’re helping to combat climate change. The ranch also provides habitat for an ever-increasing variety of birds and wildlife, including sage grouse, pronghorn antelope, sandhill cranes, coyotes, mule deer, wolves, moose, mountain lions, elk, black bears, waterfowl, raptors, and songbirds.

“We try to work with nature as much as possible and do everything as naturally as possible,” Matt explains. “Our bison are grass-fed, grass-finished, and field-harvested. And with no stress in the meat, it’s off-the-charts delicious and healthy for you.” 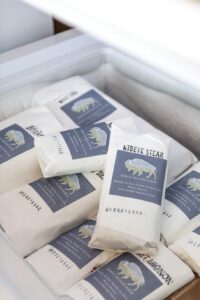 North Bridger Bison sells their meat directly to customers, and features a variety of different cuts.

The Skoglund’s operation was years in the making in terms of education, planning, financing, and developing a workable business plan. And that was just part one of the journey. Rather than purchasing a turnkey ranch, they started from scratch, using the one rudimentary existing dwelling — a 1,200-square-foot former schoolhouse — to sleep there when needed. Matt commuted to the ranch from Bozeman for the first few years while their kids, Greta, 4, and Otto, 7, attended school there and Sarah completed her master’s degree in social work online.

Despite being the only bison ranchers in the valley — and newbies at that — they’re a welcomed addition, especially since much of the agricultural land in southwest Montana continues to be developed for housing due to the overwhelming growth in population. “Our relationship with our neighbors has been one of the most rewarding parts of this whole experience,” Matt says. “[They] were understandably nervous at first. When you’re a multi-generational cattle rancher and you hear a family from Bozeman — who’s actually from Chicago and has no ranching experience — is going to start a bison ranch next door, I think it’s reasonable to be a little nervous and skeptical. But we worked hard to be honest and transparent about our plans, and I think our neighbors appreciated that we were keeping this land in agriculture. Ultimately, we are incredibly fortunate. Our neighbors are open-minded and thoughtful — and incredible ranchers and stewards of the land — and we’ve developed some wonderful relationships that we’re really grateful for.” 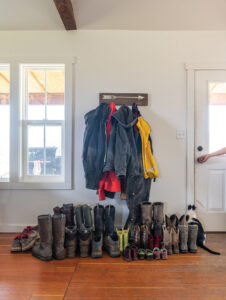 Tools of the trade: boots and jackets are a rancher’s staple.

This past June, the Skoglunds started living at the ranch full time, and Otto will attend the Shields Valley Elementary School this fall. But they’ll never forget what it was like filling orders in their Bozeman home early on. “Our living room and dining room were filled with empty boxes, dry ice, frozen bison meat, and shipping labels,” Sarah says. “We’d finish shipping at night, order pizza, and get it all done and packaged and driven over to UPS by 9 p.m. It was a family affair, literally.”

One night, in an effort to get boxes in the mail on time, Otto, who was around 6 at the time, helped match shipping labels with the correct box weights. “It was crazy, stressful, fun, and exciting all at the same time, because we were building something of our own,” Sarah says. “We knew we’d look back on it at some point with great memories — even though there have been plenty of stressful nights along the way.”

Ranching throughout Montana’s rough weather is not always easy, nor is dealing with unpredictable 1,000-plus-pound animals, but the Skoglunds know they’ve found their calling. “We’re completely all in on the ranch, and we’re very passionate about what we’re doing,” Matt says. “We’re not trying to build a business and sell it in five years. This is a long-term plan for us. It’s a forever plan for us.”

“We love all of it,” Sarah adds. “And that’s the only reason this works.”