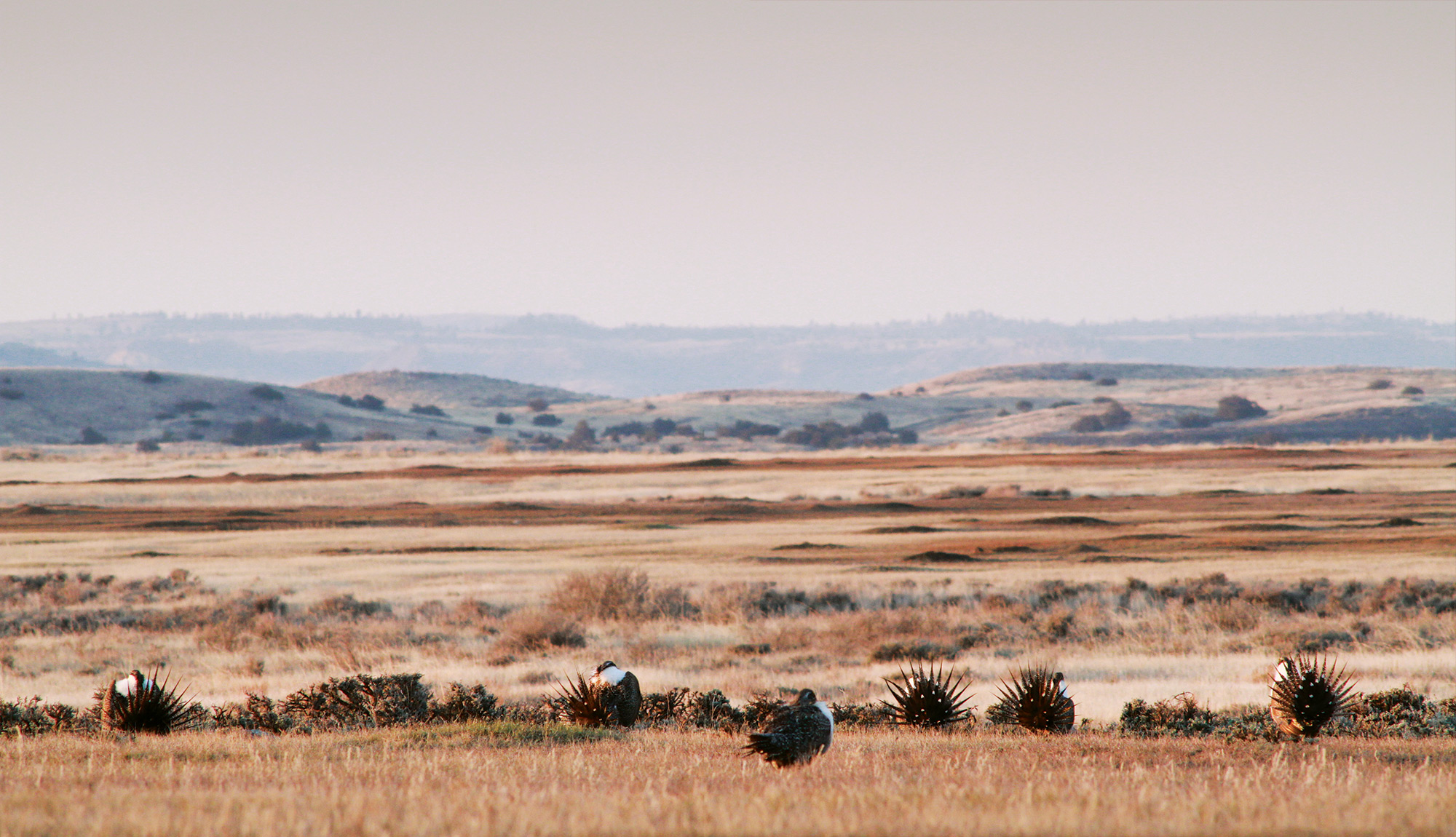 Rancher Mike Delaney climbs into his jeep with Nikki Rife, district conservationist for the Natural Resources Conservation Service (NRCS) out of the sleepy Montana town of Winnett, an hour east of Lewistown. They lead the way on a faint two-track road threading through grasslands laced with Wyoming big sagebrush. This is country so immense that far off horizons merge with a great overturned bowl of sky. After leaving the spacious ranch house and barns, there’s little sign of human presence within a 360-degree view — no power lines, no house or even a shed as far as the eye wanders. We’ve entered some of the best sage grouse range in Montana with 10 identified leks (breeding areas) on the Delaney 44 Ranch, and flocks of hundreds of birds.

The ranch and adjacent neighboring places, along with intermixed Bureau of Land Management areas, form a significant haven of more than 80,000 acres, safe, so far, from sodbusting threats that have devastated other nearby sage grouse range, despite the arid conditions for farming. Just south of Winnett, some 30,000 acres were recently plowed. Not far from the Delaneys’, a ranch in the sage grouse stronghold recently went up for sale and farther east another ranch was subdivided for recreational property lots.

Mike and his wife Deb Delaney have run a Black Angus cow-calf operation since the early 1980s. They select the smaller breeds that eat less grass and overall fare better on rangeland plants in a challenging climate of winter blizzards, 20-below-zero temperatures and winds that gather steam across miles of prairies. Mike grew up here and learned a strong stewardship ethic from his father, Douglas-Michael who in turn learned from his father, the first Michael Delaney to settle in this remote country.

Mike and Deb put in long days to pass down a profitable and sustainable ranch to their daughter and son. Their daughter, Anne Bergum, is actively involved with the ranch and helps keep track of the finances. Their son, Michael Delaney, has worked side-by-side with them since 2006, after graduating from Montana State University with an animal science degree. Michael brings new technology to the ranch, including remote cameras that alert the rancher to any problems at watering tanks or during calving season. Profitability and passing on their legacy are two key reasons that the Delaneys have plenty of praise for the Sage Grouse Initiative (SGI). They signed up when the NRCS first launched the partnership in 2010.

“All the credit for us getting involved goes to Nikki,” said Mike, who regularly attends her workshops. The SGI creates partnerships between private and public landholders to conserve wildlife through sustainable agriculture.

When she explained the benefits of the Sage Grouse Initiative, the Delaneys decided to approach the bank for a loan and were immediately successful. SGI-prescribed grazing programs are typically matched 75:25 with the federal government paying the lion’s share; the landowner must make initial investments and be paid back for some of the expenses they front beyond the 25 percent.

After initial inventory and planning performed by Heather Richter, a former rangeland management specialist in Winnett, the Delaneys have two years under their belts with the new fencing and water pipelines connecting stock tanks that allow lands a mile square in size (one section) to be rested from grazing for 15 months. As part of the plan, 20 percent of the ranch is rested at a time. They’re already seeing results they hadn’t counted on across their sizeable ranch, despite the aridity of this country; the region averages 11 inches of precipitation a year and soils can be tough clay hardpan in places.

Adding that new grazing regime with more pastures and rotation has also made it easier to round up cows each spring. The cattle don’t have to range as far to find excellent forage and water, and are in better shape for calving season. They now graze about 75 fewer head of cattle, but with higher profitability. Calf weights have gone up from about 500 to 600 pounds.

The Delaneys and Nikki Rife led our small group into the heart of a rested 2,200-acre “pasture.” To put the size of the rested area in perspective, a land section is 640 acres or a mile square. The group included Pete Husby, state biologist for the Montana NRCS. He’s known for outstanding range botany skills, perhaps rivaled only by Jon Siddoway, state rangeland conservationist for NRCS, also with the group. Husby and Siddoway were there to see what two seasons of rest-rotation grazing looked like, since change usually takes a long time to be clearly noticeable.

Also on the tour was Scott Anderson, the rangeland conservationist for the Sage Grouse Initiative based out of Forsyth, 120 miles to the southeast. He’s served in a partner position with Montana Association of Conservation Districts and the NRCS since 2011, and planned to share what he learned from this field tour with the ranchers enrolled in the initiative in his area.

“I’ve found that SGI has a snowball effect,” Anderson said. “A few ranchers get involved and then more want to be part of it and it keeps growing.”

The bruised clouds loomed low, signaling rain that would be welcome after a worrying spring drought. Weather is more than weather when it comes to grass growth, range health and sage grouse chick survival too. Weather can make the difference between profit and loss.

Mike, wearing a Delaney 44 Ranch ball cap and sporting a neatly trimmed beard and mustache, gave a slight grin when the first drops of rain fell. The group walked among sagebrush, bunchgrasses, blooming wild roses that hugged the ground, a clue to the intensity of winds that shape all who live here. A cool breeze blew as the scientists pointed out new green growth mixed with the tall “residual” cover of last year’s grasses that together give sage grouse hens what they need for nesting. A sage grouse hen looks not just for sagebrush under which to hide her nest, but the additional screen of tall grasses and forbs, the wildflowers that will produce tender leaves and attract bugs. Chicks thrive on a diet of nutritious caterpillars, spiders, ants and beetles that flourish in rested pastures.

Nikki explained that when cattle do return to a rested pasture, they benefit from the combination of green grass for protein and the older growth residual grasses for energy. If cattle eat too much green grass alone, the high-moisture content washes through the system with protein benefits but not complete nutrition. The drier brown grass from prior seasons offers important carbohydrates.

She ran her fingers through the tall mix of green and golden grass and nearby sagebrush as she explained the value of resting pastures for the health of the range. When rain falls on the taller grasses and shrubs, the drops run down leaves and stems and some drip off the edge and infiltrate the soil well, compared to bare ground where rain splashes and runs off. Nikki explained it’s the same principle as watering backyard trees around the drip line from the branches for the most effective way to reach the roots.

With too much rest, she pointed out that the bunchgrasses die back in the middle from lack of grazing in a system that long-evolved with bison grazing big areas and coming back to other places later. Their hooves actually play a role “mashing” the old grasses and manure into the ground to help fertilize the soil. The fences and planning are an attempt to mimic some of that age-old natural system of the Montana plains.

“With cattle, we can’t control what they eat and where they step, but with fences we can control their time, duration and the areas they graze,” Nikki said.

She bent low to marvel at a Gardner’s salt bush that spread to more than a foot or two wide, unusual to find in actively grazed pastures, since cattle selectively choose this plant like a favorite ice cream that also has superior nutritional value.

The group continued on to check out a new stock tank across the fence line from the rested pasture. SGI helped pay for the addition of 19 water developments for a total of 50 on the ranch. That’s made the rest-rotation possible. Every tank comes equipped with an escape ramp in case sage grouse or other birds fall in or need to get a foothold to climb out of an otherwise slick-sided vertical tank.

One of the challenges of the plan was to work with the Bureau of Land Management on the intermixed lands for pipelines to pass through the allotments from public to private land, and to coordinate grazing schedules so that the ranch plan became seamless across boundaries. The Delaneys had nothing but praise for Katie Decker, the BLM rangeland specialist out of Lewistown. She and BLM biologist Matt Comer have helped them succeed in improving their range and the BLM lease land, too, as part of the SGI program.

“It was exciting to us to have Mike Delaney come to us with a proposal to improve the range,” Katie said. “We’re very pleased to have this opportunity to work together to manage lands well, especially for a species like sage grouse that doesn’t know boundaries of private or BLM land.”

Katie said she was impressed by the proactive plan — presented to the BLM, by the Delaneys and Nikki Rife — that identified areas for pipelines, fences and water tanks with mitigation already in place, such as marking fences to prevent collisions and careful siting of the tanks. The BLM then conducted an Environmental Assessment and followed federal NEPA guidelines to approve the project.

On our way to see the watering tank, we’d passed a small fenced pond where slender and petite Wilson’s phalaropes spun circles in the water, a clever feeding technique for creating upwelling in the water to bring aquatic insects to the surface. Mike explains that they fenced the pond to benefit wildlife and to keep cattle out that might otherwise wallow in deadly bogs.

Prairie wildlife abounds on the ranch. That day we saw short-eared owls, golden eagles, upland sandpipers, marbled godwits, long-billed curlews, meadowlarks and a few pronghorn. The Delaneys worry about the pronghorn that once numbered in the thousands and have dwindled in the past few years across the region, mostly from a disease called bluetongue. While the couple and their son spend most of their time looking out for cattle, they appreciate all the wildlife, from a den of rattlesnakes and bull snakes they discovered not far from their residence, to the coyotes that feed on the afterbirth during calving season but generally leave the calves alone.

“We’ve always wanted to be good stewards of the land,” Deb said. “We’ve never thought of owning the land but of taking care of it and growing grass, not cows.” 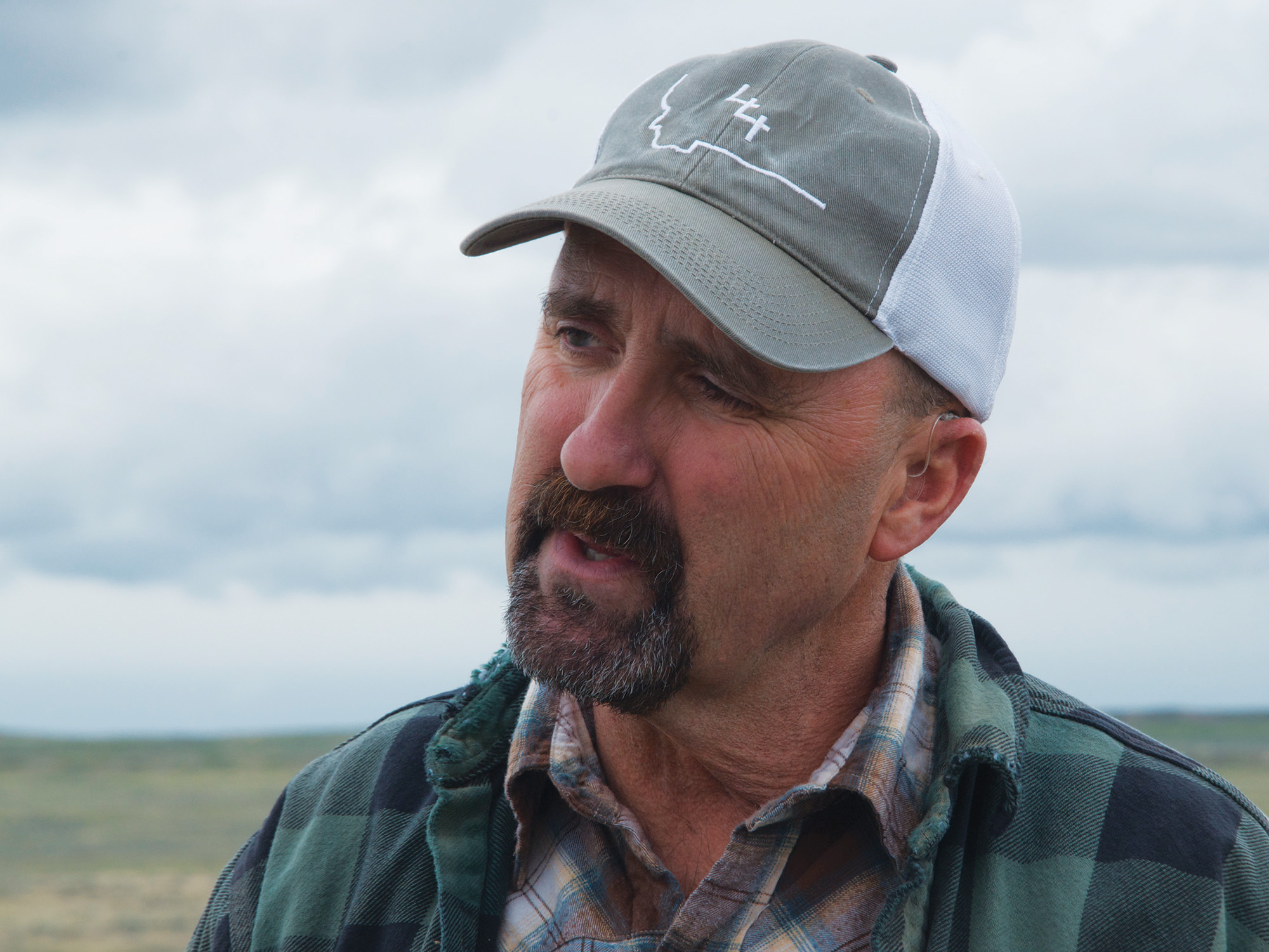 Multi-generation Montana rancher Mike Delaney discusses how he moves his cattle across big country that is home to at least 10 sage grouse leks. | Photo by Deborah Richie 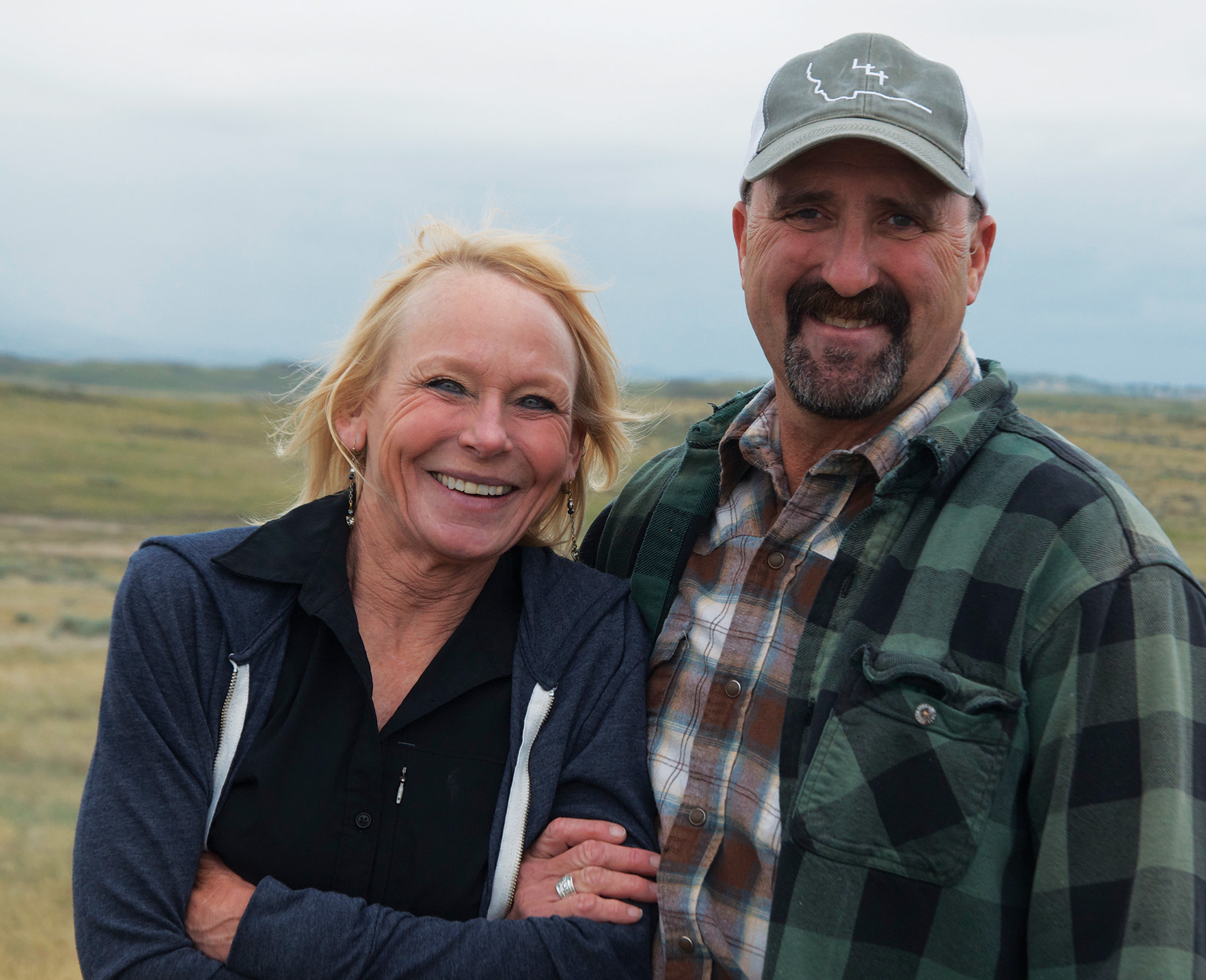 Deb and Mike Delaney work in partnership to run their extensive Black Angus cow-calf operation in the vast sagebrush and grasslands of Montana, east of Lewistown, near the tiny town of Winnett. | Photo by Deborah Richie 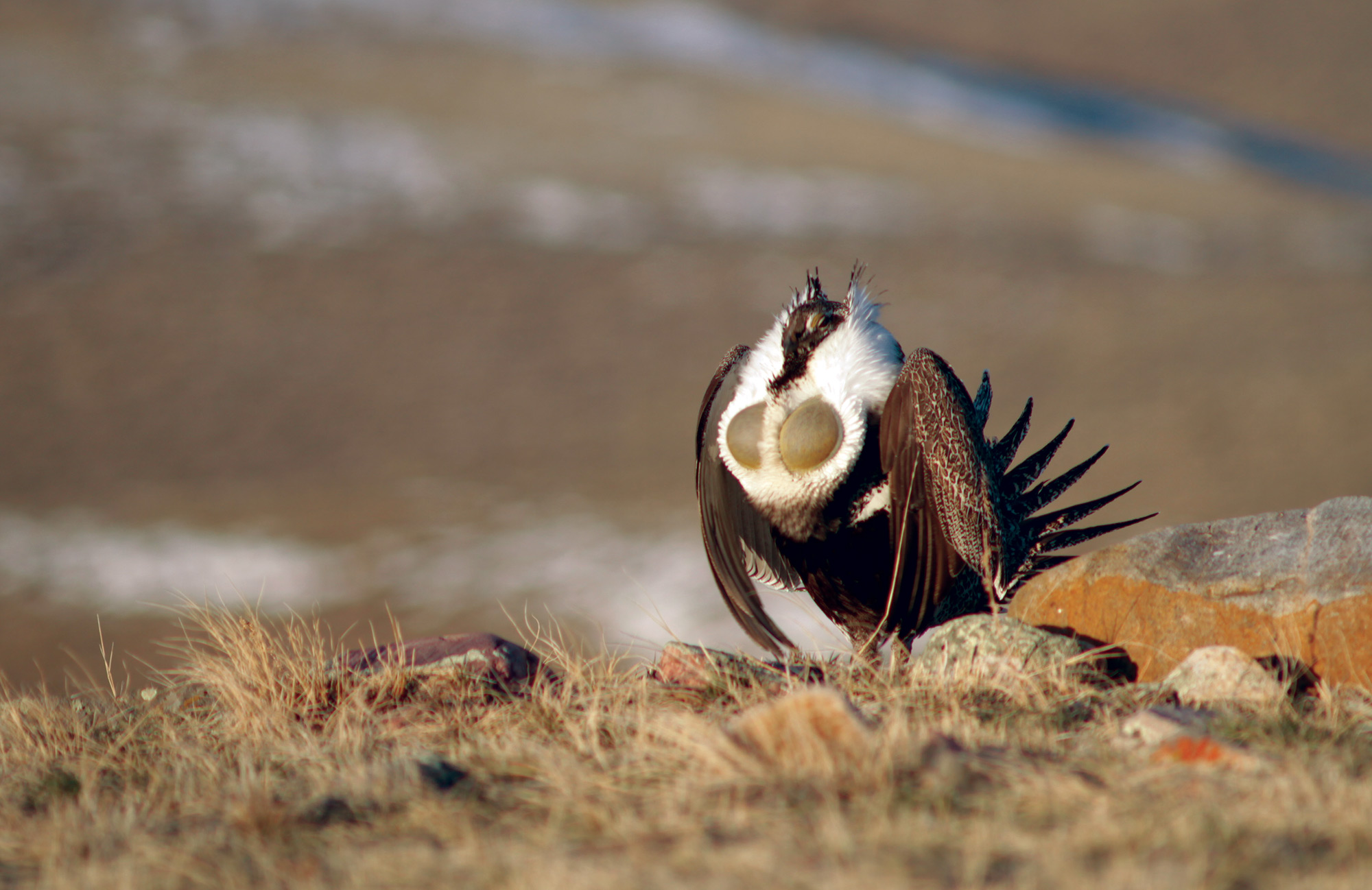 A male sage grouse unfurls its chest in a breeding display. Habitat protection for the bird has proven to benefit wildlife and cattle. | Photo by Jeremy Roberts / conservation Media