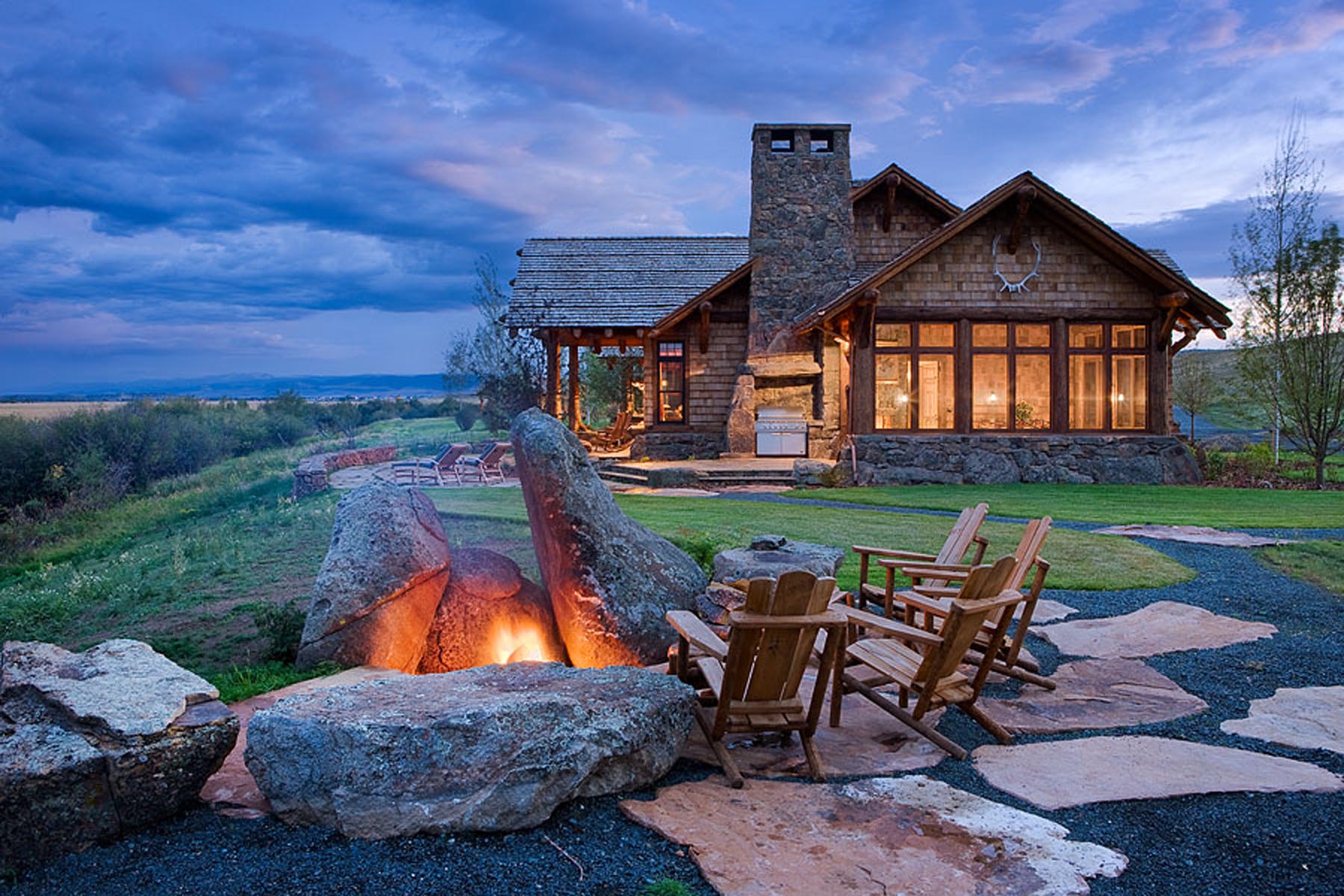 BUILT FROM THE PERSPECTIVE of an avid fly fisher, this Montana retreat combines an outdoor setting with the comforts of a family vacation home. Situated in cattle ranching country, an historic stagecoach stop and the four buildings — a main lodge, a family cabin, an artist studio and a rustic homestead-inspired cabin — surround a pond and border a natural lake near the Madison River. Each cabin has its own personality and character traits, each one designed for a different purpose. And yet, together they sing.

The fishing camp took its inspiration from the park buildings at Fishing Bridge and the Norris Museum at Norris Geyser Basin in Yellowstone National Park, according to its architect Kirk Michels, principal at KMA, a design-build firm in Livingston, Montana.

“A good example of that are the rooted tree columns that come up out of the stones, anchoring the main lodge,” Michels says. “And the large stones at the base of the homes that were collected from an area around the hills of the owners’ ranch.”

The skin of the building is shingled so it can flow without a corner board, much like the scales of a fish, as was Michels’ intention. To achieve the homeowners vision, KMA worked closely with Blue Ribbon Builders of Big Sky and Bozeman’s Design Associates for interior decor.

“The vision was to create a collection of buildings that would serve the owner’s needs as well as entertaining and outfitting his guests,” he says. One room in the main lodge has a well-appointed gear room, with fly rods, flies and all the accoutrements for hunting and fishing. “It’s all about the sportsman perspective. The drawer pulls are made from shotgun barrels. We did anything we could think of that was sportsman-like. And there’s a faux roof inside the gear room that gives the impression of being within the lodge.”

Michels also created an outdoor shower at the entrance to the gear room and there is a parking pad for a four-wheeler. “This way people can jump on it and ride out to the fishing area, directly from the gear room,” he says.

A unique feature of the cabins is the toothy structure. The roof rafters are expressed by extending beyond the roof on the rafter tails, with pencil-point ends that look as though they’ve been chewed down by beavers, instead of square off.

The idea was to create a fishing camp and a destination for enjoying the outdoor life of this broad southwest Montana valley.

“The buildings are grouped so everyone has privacy but they are all within proximity of the pond,” Michels says. “A reconstructed homestead cabin sits in the near distance for guests to enjoy the experience of staying in an early log cabin; it’s a digression from the rest of the buildings in the retreat.”

Doug and JoDean Bing, principals at Blue Ribbon Builders, were the on-site orchestrators for the reclamation of the property as well as the construction of the compound. In addition to the fishing retreat the owner was sensitive to the environmental impact that a century of cattle ranching had on the main ranch.

“It was an old cattle ranch,” JoDean Bing says. “So the land was trodden and the buildings were in disrepair. The new owners wanted to bring back the land to the way it was before the cattle got on it. It had spring creeks on it and we did a lot of riparian work.”

As builders of high-end custom homes, Blue Ribbon Builders’ 30-year sterling reputation allowed the owner to give them free reign.

“We’d worked for the owners on several other projects, so they trusted us,” Bing says. “We hired the experts and managed the riparian work to bring the creeks back to a natural state. When we started out, the streams were all straight and muddy. Now they’re back to their original meandering state. It was a fun, interesting and a rewarding part of this project for us.”

Reclaiming wood from the original buildings, Blue Ribbon Builders were able to contribute to the rustic nature of the site and keep the historic connection alive.

“We took truckloads of stuff to the dump, but we saved whatever had value,” Bing says. “The wood was saved and used for the cabinetry, interior trim and siding.”

Inside, the homes mirror the intent of the grouped fishing cabins, thanks to the sharp eye of interior designer Lynette Zambon, owner of Design Associates.

“The landowners wanted to do something more fitting for Montana,” Zambon says. “Nothing too over the top, they wanted it to be very relaxing. Most of the furnishings are found pieces, older antiques, so we had a nice mix of old and new.”

The idea behind using found pieces and antiques was to have a backstory to go along with the décor. Custom-made cabinets, shelves and fixtures built by Rick Zaik of CenterMark Industries in Belgrade gave each room and building its individual flair.

“There’s a story behind everything that’s in there, from their travels, from their family — we wanted them to come home to a place that has meaning for them,” Zambon says.

Each cabin was given a name to add to the intimate feeling of the complex. Fletcher, the smaller family cabin, and Moore, the artist studio cabin, were named after streams on the property. The main house is the Fishing Lodge and the rustic homestead structure is called the Lake Cabin because of its view of the lake.

“Each cabin was decorated with their purposes in mind,” Zambon says. “For example, the Moore cabin is an artist cabin with painted floors. It’s rustic with some modern furniture but still eclectic, like you would see in an artist’s home.”

The owner also commissioned two Russell Chatham paintings that went into the Lodge.

“They have other properties around here, but they probably use this one the most. He’s an avid fisherman and the whole family loves the outdoors, it’s their escape,” Zambon says. “The dining room table in the main lodge, we found on our travels. The interesting thing about that room is the windows can be taken out and replaced with screens so in the summer it becomes an outdoor eating area.”

All the kitchen cabinets were built from recycled wood and finished with a glazed paint. Brushed black granite countertops were used so there’s a nice texture that takes the polish down so it doesn’t seem so formal.

“The whole idea is that you’ve got great architecture, but by reusing a lot of the original wood and a few furnishings we were able to give the home its character,” Zambon says. “We let the simplicity of the material speak for itself.” 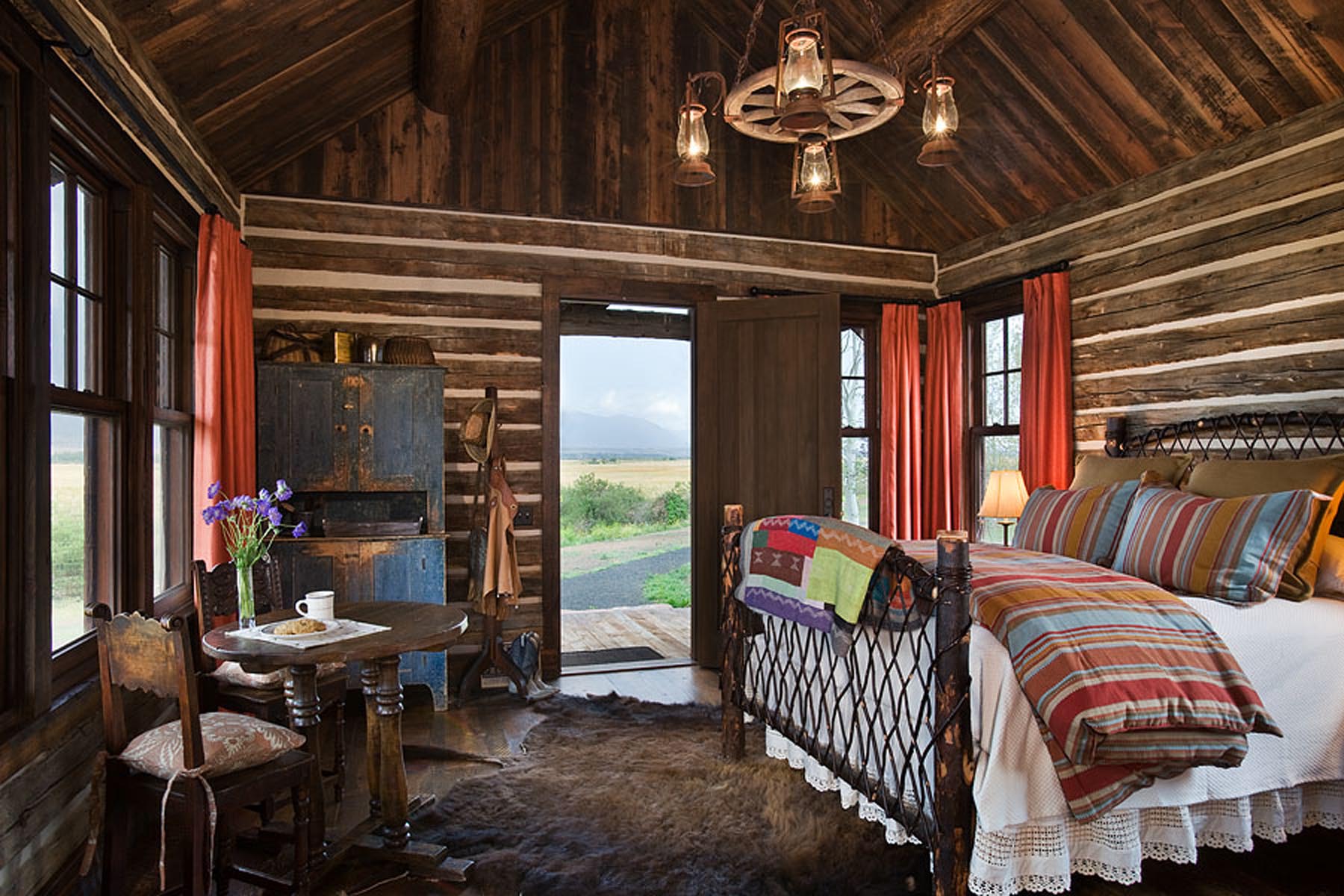 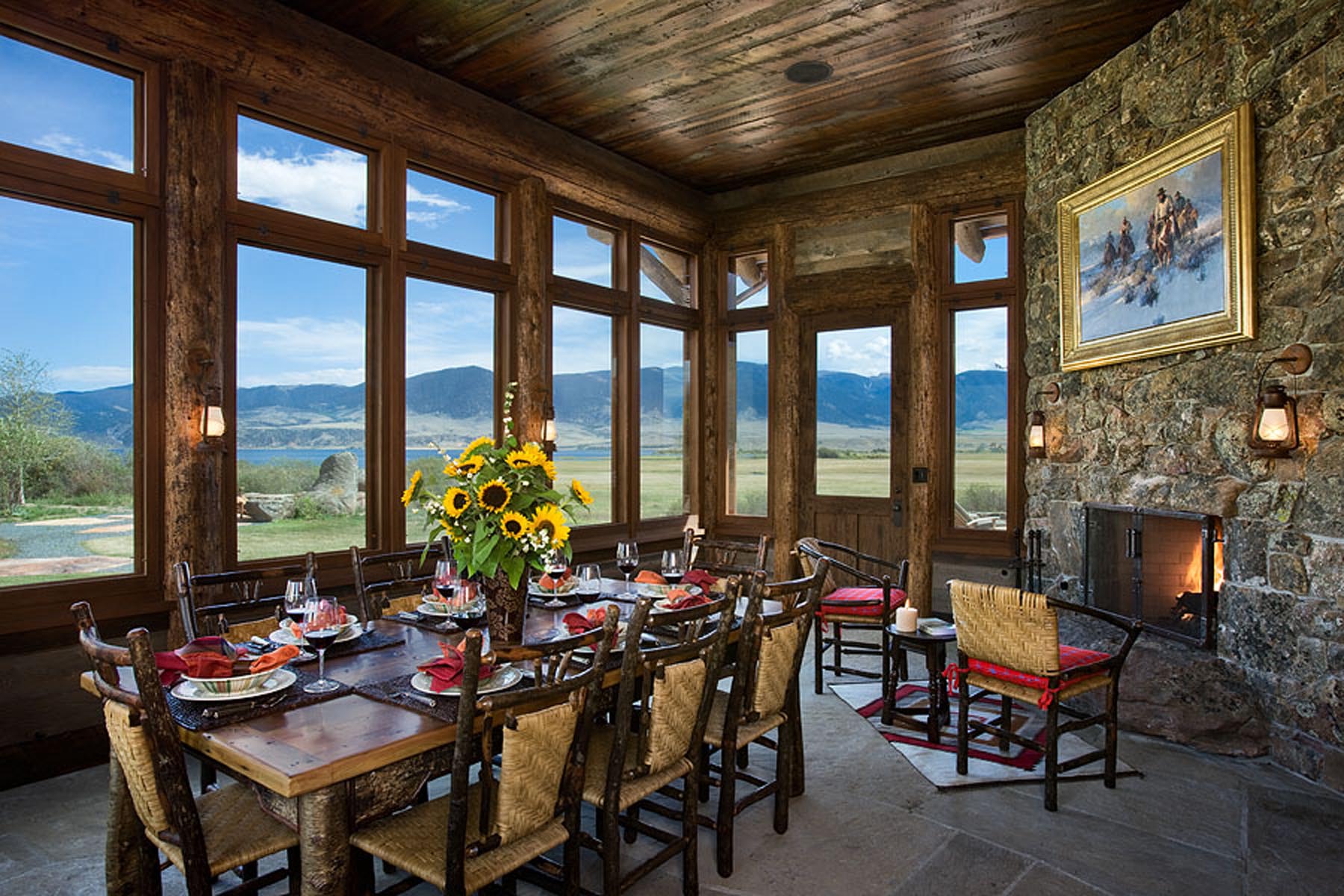 In the summer the wall of windows in the dining area are replaced with screens for guests to relish meals alfresco. Old Hickory chairs add a rustic flair. 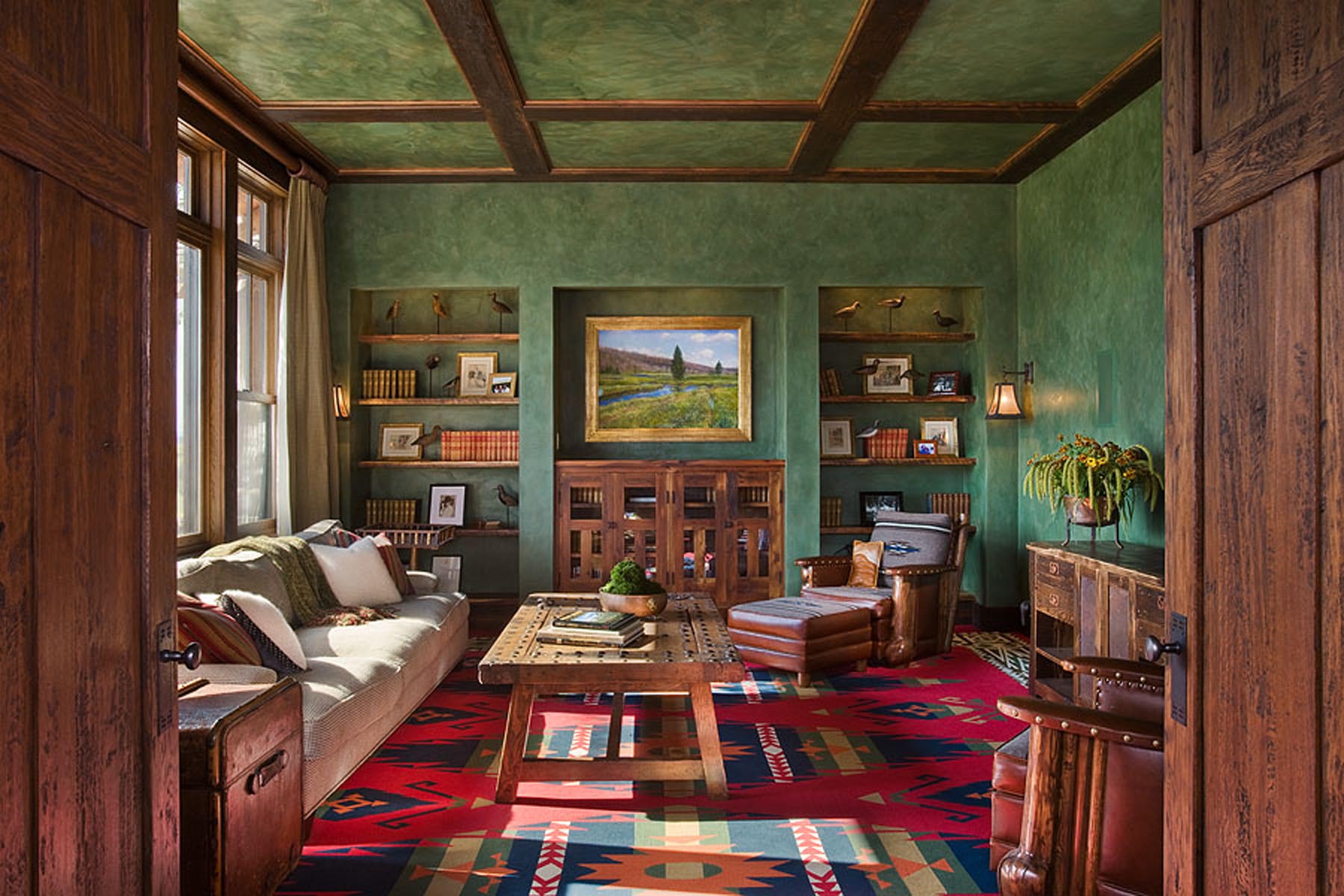 Hand-plastered walls in the den offer a quiet retreat with accents of bold color from a carpet Design Associates had custom-made for the room. 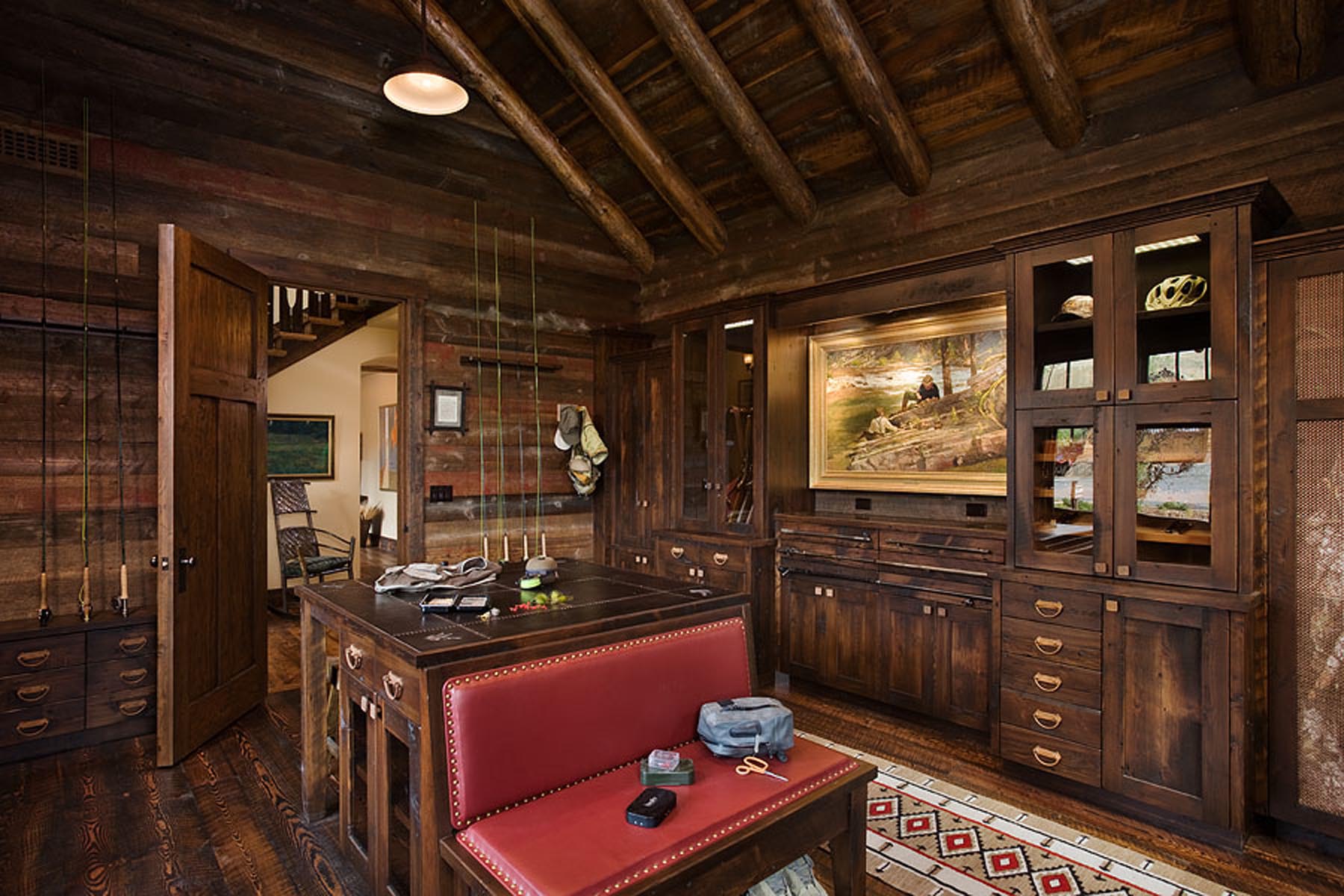 The gear room is a sportsman’s hideout, featuring customized gun and rod storage from CenterMark Industries. 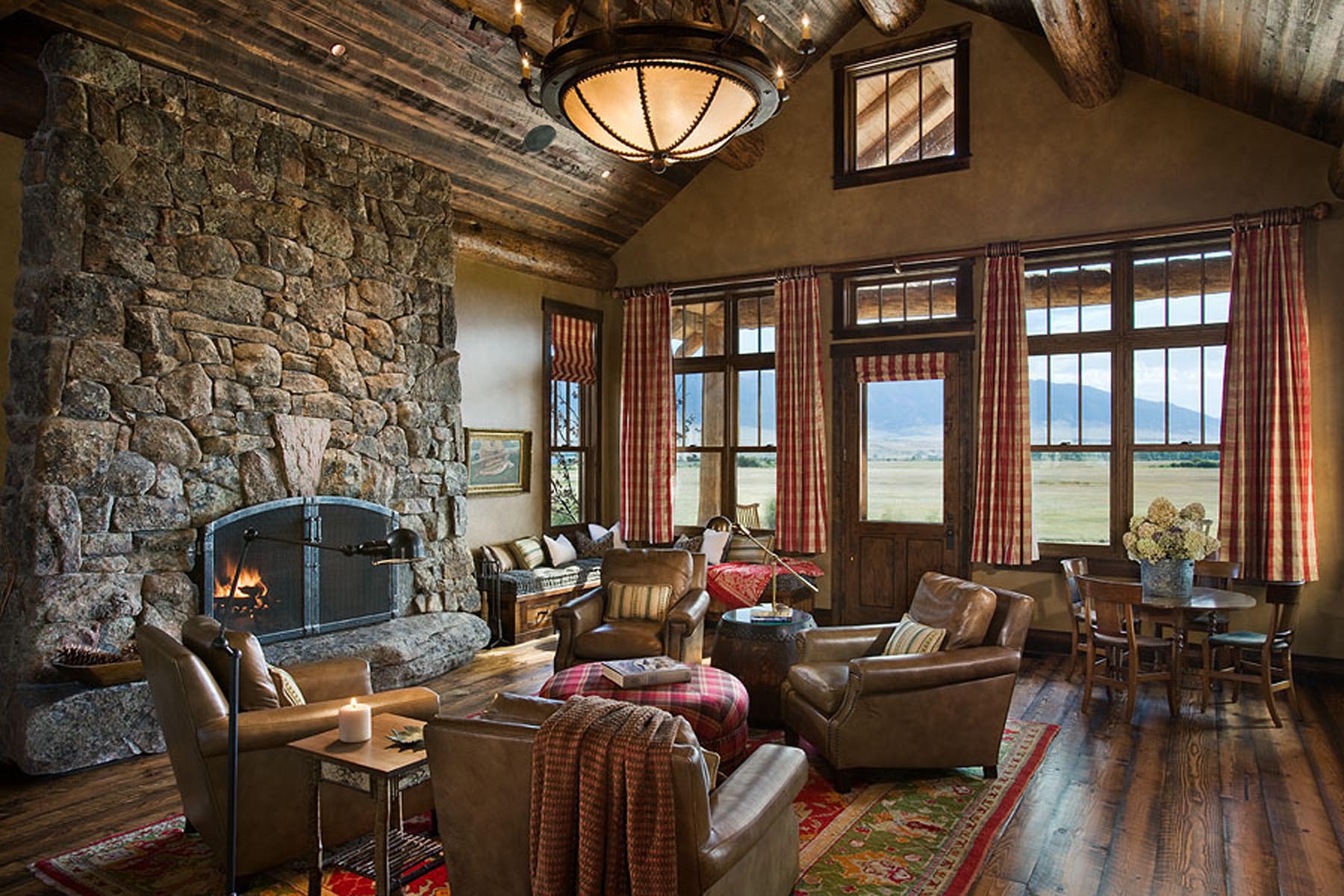 Lynette Zambon of Design Associates in Bozeman created an interior palette that incorporated antiques and new pieces to lend it a casual, comfortable feeling in the living room of the Fishing Lodge. 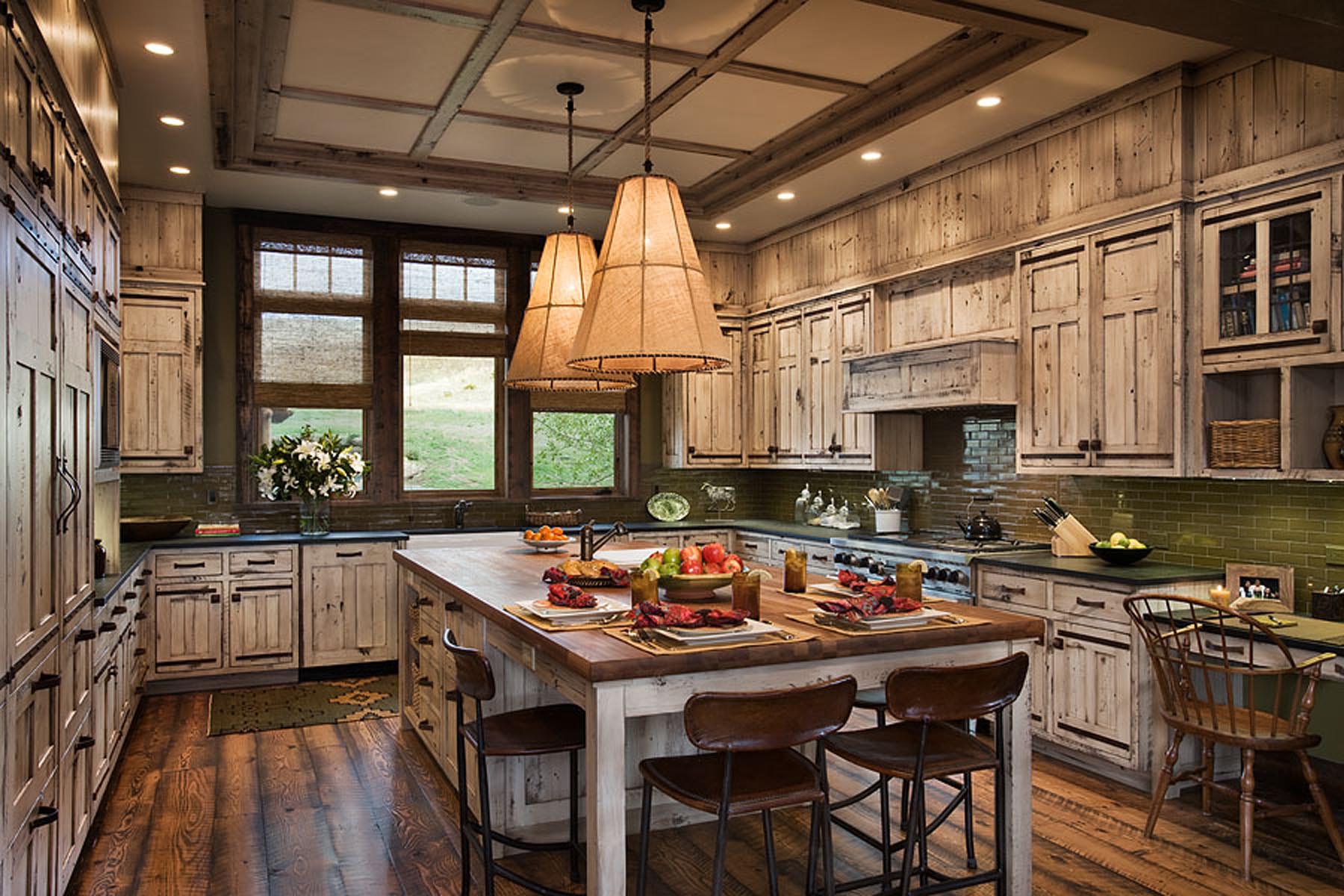 CenterMark Industries utilized reclaimed fir in the custom-built kitchen cabinetry. The cabinets are painted antique white, hand-distressed, then finished with a glaze and metal strap hinges. 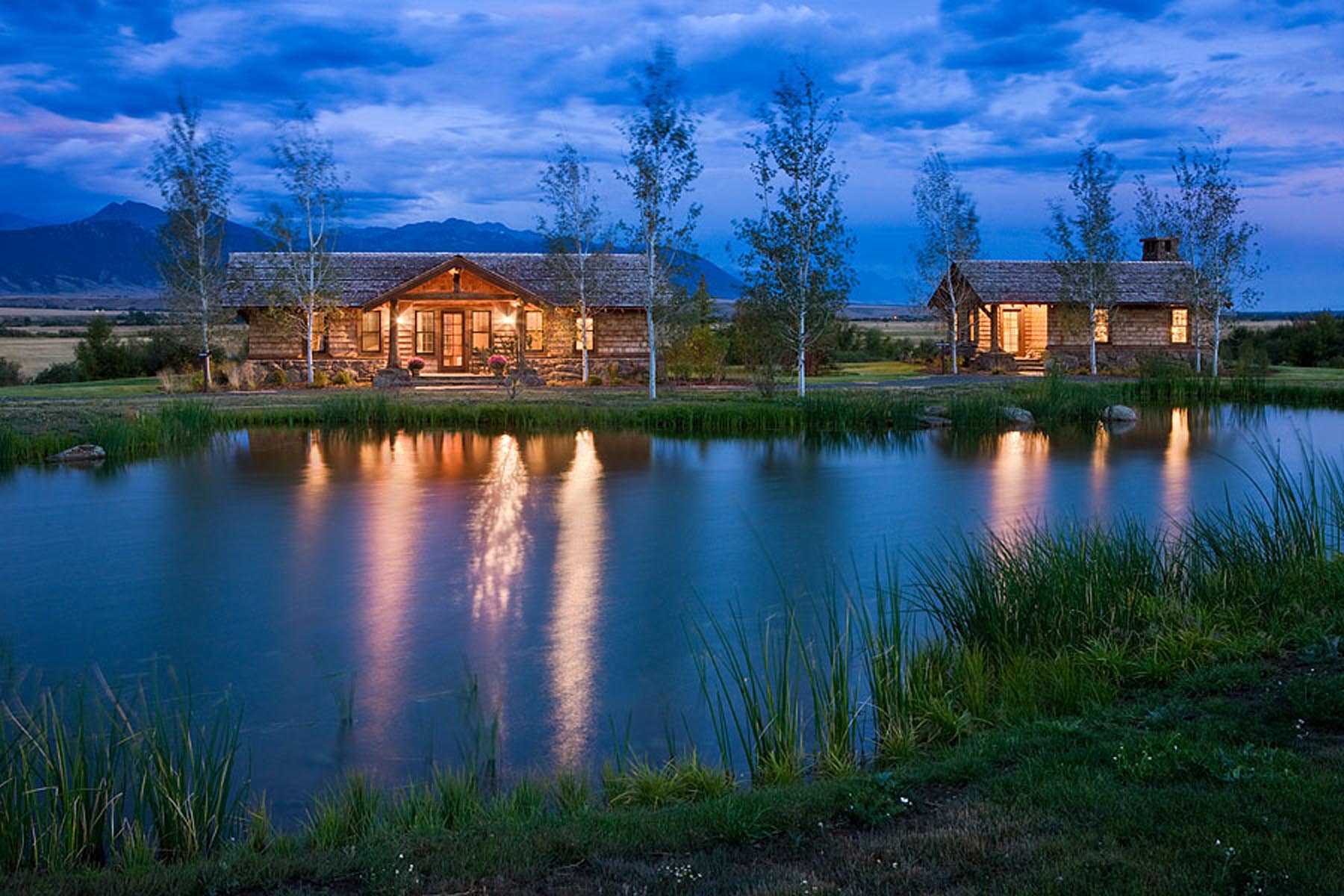 The Fishing Lodge and Moore cabin are situated on the trout pond with views of the sweeping Southwest Montana valley.