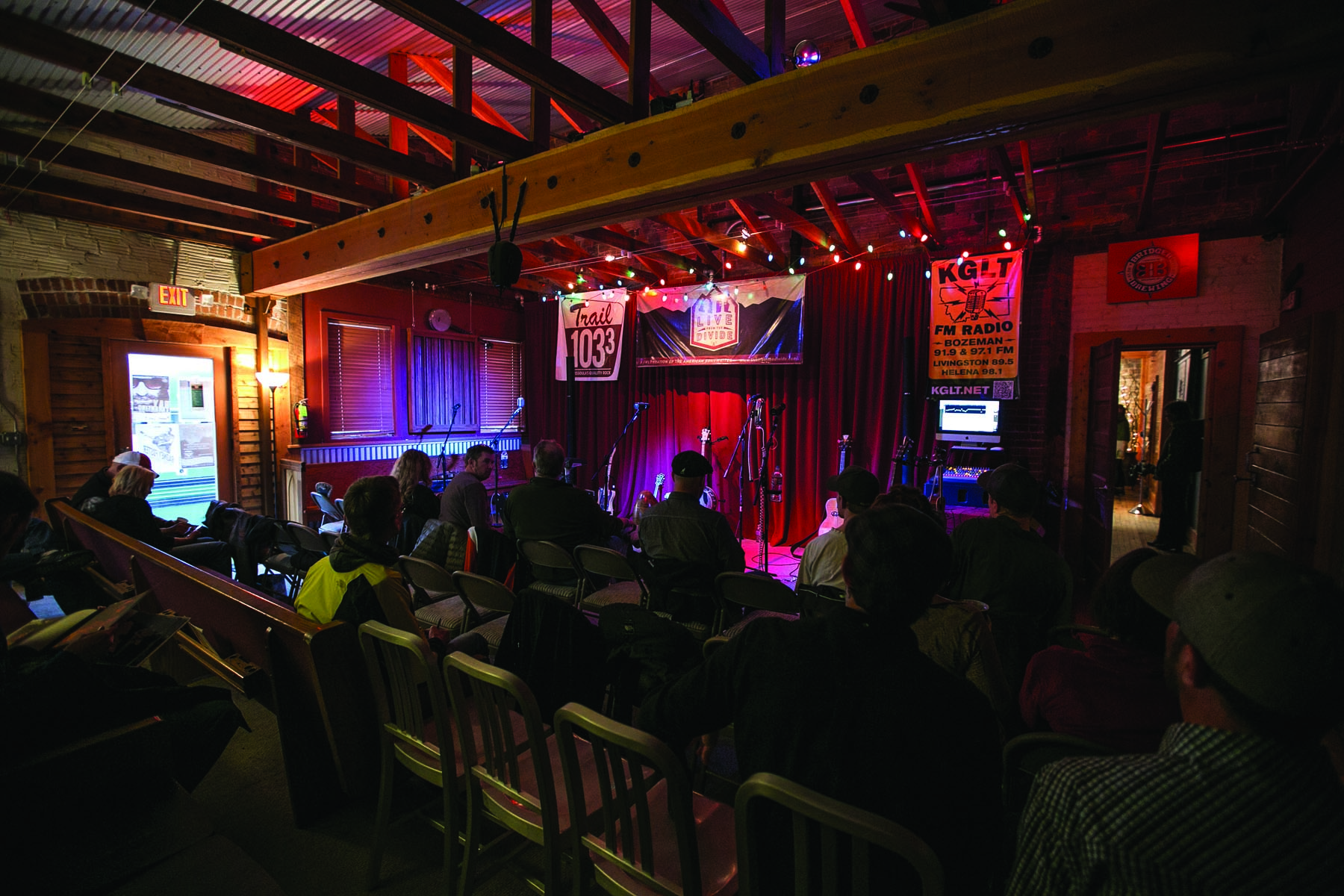 On a sleepy spring evening in Bozeman, a small crowd starts to gather inside an old brick building on the north side of town. Inside reveals a warmly lit atmosphere where the Shook Twins — an indie-folk quintet from Portland — have set up their instruments in the front half of the space. Beer from a local brewery is made available to the crowd, which is buzzing with excitement over the night’s sold-out performance.

The patrons haven’t just come for a concert; they’ve come to be part of a live radio program that will be recorded and then broadcast in the future on stations across the country. It’s part of a series called Live From the Divide: Celebration of the American Songwriter. Now in its third season, the program features national, regional and local musicians performing in an intimate, 50-seat setting. The performances are recorded, then mixed and edited before they are ready for radio. They are also made available to stream on the Internet for free.

Recording the show is music industry veteran and Executive Producer Doc Wiley, a 2005 Grammy winner for best engineer and mixer in the Salsa and Merengue category, along with Producer Jason Wickens and Engineer R.J. Hatten. The three came together a few years ago after Wiley suggested that Wickens start recording the small concerts he was then bringing to the venue. With Wiley’s recording expertise and Wickens’ taste for quality singer-songwriters, it seemed like a perfect match. Hatten was brought in to run and mix the sound for the live shows.

“We’ve had multiple national acts say the show was their favorite stop on the tour because of the intimacy of the room and the unique connection to the audience,” says Wickens, who grew up ranching in Winifred, Mont., and went on to earn a degree from the Conservatory of Recording Arts and Sciences in 2004. “The reception to what we’re getting has been overwhelmingly positive.”

This year, Wiley and his crew will produce more than 80 concerts, which will then be culled down to 50 episodes for broadcast. Montana State University’s independently run station, KGLT, serves as the flagship for the series — broadcasting an episode every Monday night — but stations in California, Washington and Idaho have also broadcast the show. The series was recently picked up by the Public Radio Exchange — home to popular syndicated programs like The Moth Radio Hour and Sound Opinions — which can now help distribute Live From the Divide around the globe. It’s helping to put Bozeman on the musical map.

“For us it’s a matter of catching artists on the rise — locally and regionally — and then broadcasting them,” says Wiley, who relocated to Bozeman in 2009 after a successful career recording and mixing for artists including U2 and Whitney Houston. “And then when we bring in a national artist they realize we are honoring the local songwriter, too.”

Kevin Fabozzi, a musician from Big Sky that plays in numerous bluegrass and folk bands, looks at the series as a way for locals to show their stuff and get some more name recognition. With about 35 to 40 percent of the episodes featuring local and regional artists, he was excited to play a solo show this past May.

“With so many great up and coming artists and so many truly established musicians touring these days, it’s easy to view the local artist as amateur, struggling to find his or her place among the top performers,” states Fabozzi. “I think Live From The Divide gives the local songwriter a chance to be among the best within the total archive that’s being created. That’s pretty special.”

Indeed, the series allows for local songwriters like Fabozzi to have their name mentioned in the same breath as acclaimed performers like Steve Earle, Jorma Kaukonen, Mollie O’Brien, Hayes Carll and Spencer Bohren — who have all been recorded for the show. A look at the upcoming schedule reveals some well-known songwriters: Chis Knight, Holly Williams, Tommy Emanuel, Radney Foster and David Olney are all slated to perform this summer.

“We’re on a quest to capture as many great songwriters as possible and share their music on public radio,” says Wickens. “We love that we have the opportunity to expose our local and regional acts to nationwide audiences alongside more nationally known artists.”

The structure — originally used as cold storage for local grocery stores when it was built in the early 1900s — has been beautifully refurbished and is part of the charm of the program. With exposed beams and brick surrounding a refinished wood floor and some of the original freezer doors, it feels rustically modern. Indeed, the whole building is made for creativity — it’s also home to a graphic design firm, another recording studio and an architect.

It’s a busy place, with sometimes up to 16 shows a month during the summer, but Wiley feels like there is plenty of talent to go around. The hardest part, he says, is to keep it financially viable as the series progresses. So far, major brands like Bose, DiMarzio and Gibson have signed on as sponsors, helping with finances and adding name recognition and visibility.

“The goal is pretty simple,” says Wiley. “Make it a regional concern to where we get syndication. I want to be up there with shows like Mountain Stage and Austin City Limits — but from Bozeman — and I want the great people of Montana to own it as theirs. It’s an unappreciated part of the music business — the songwriter. That’s our niche and that’s where we’re going to stay.” 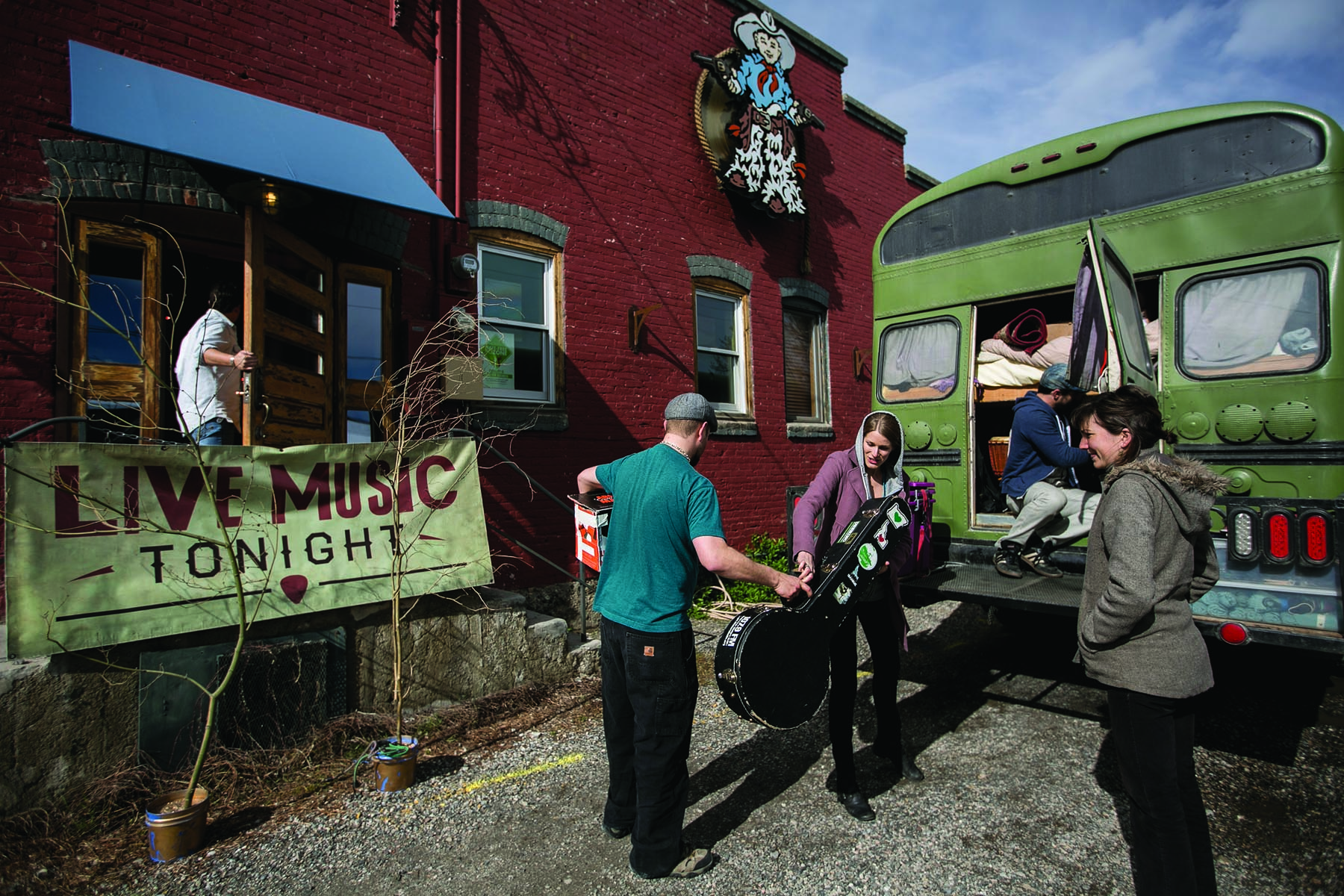 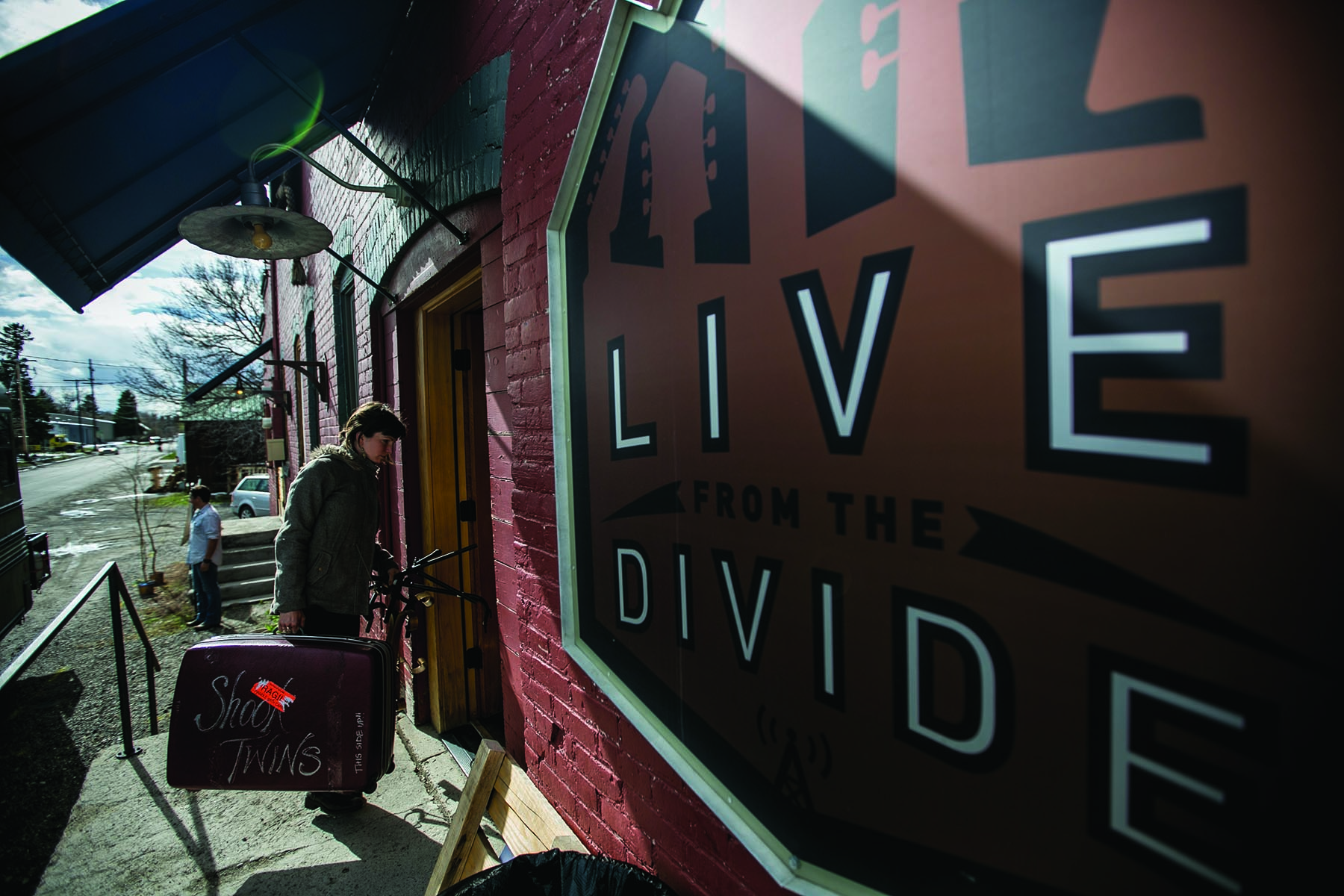 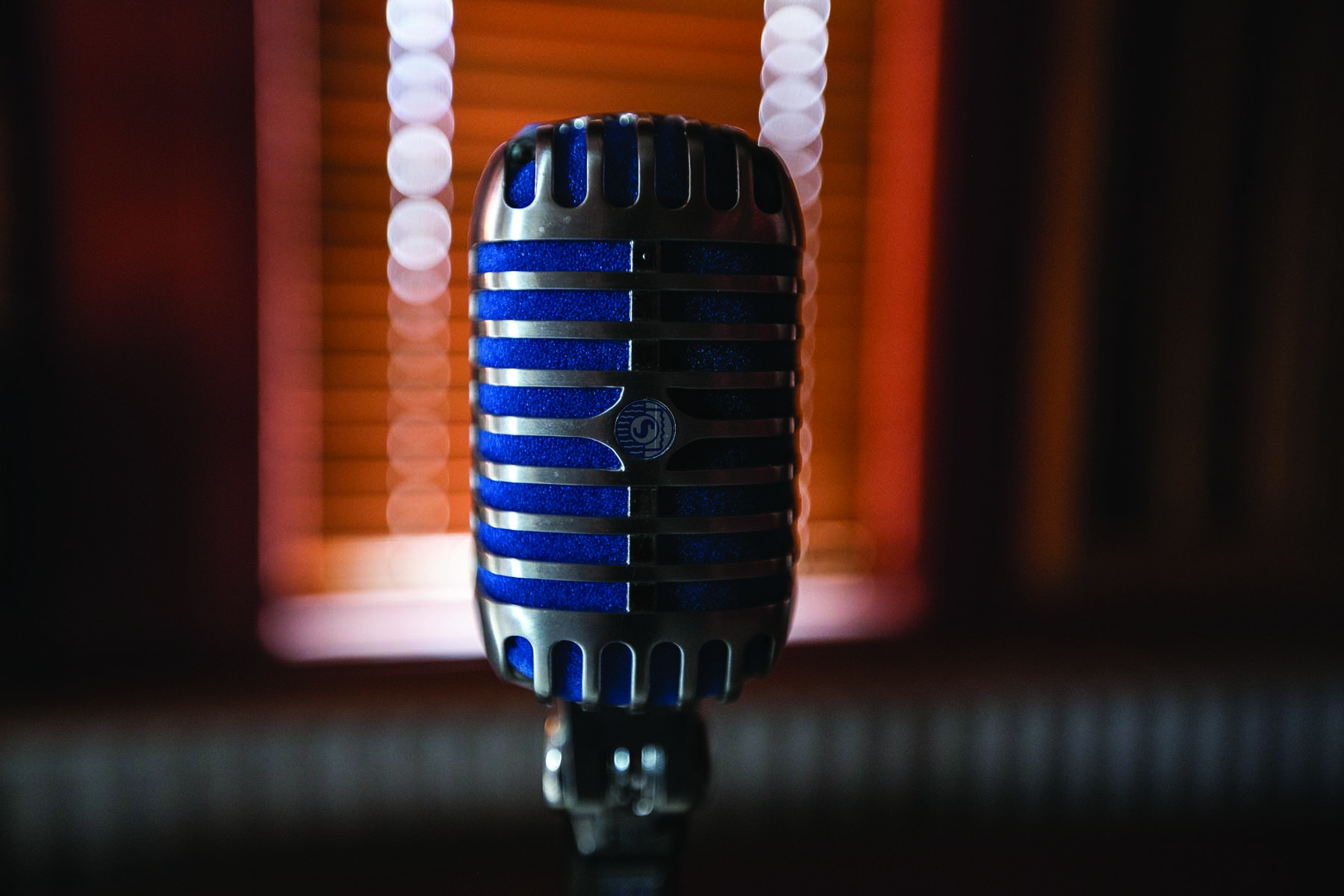 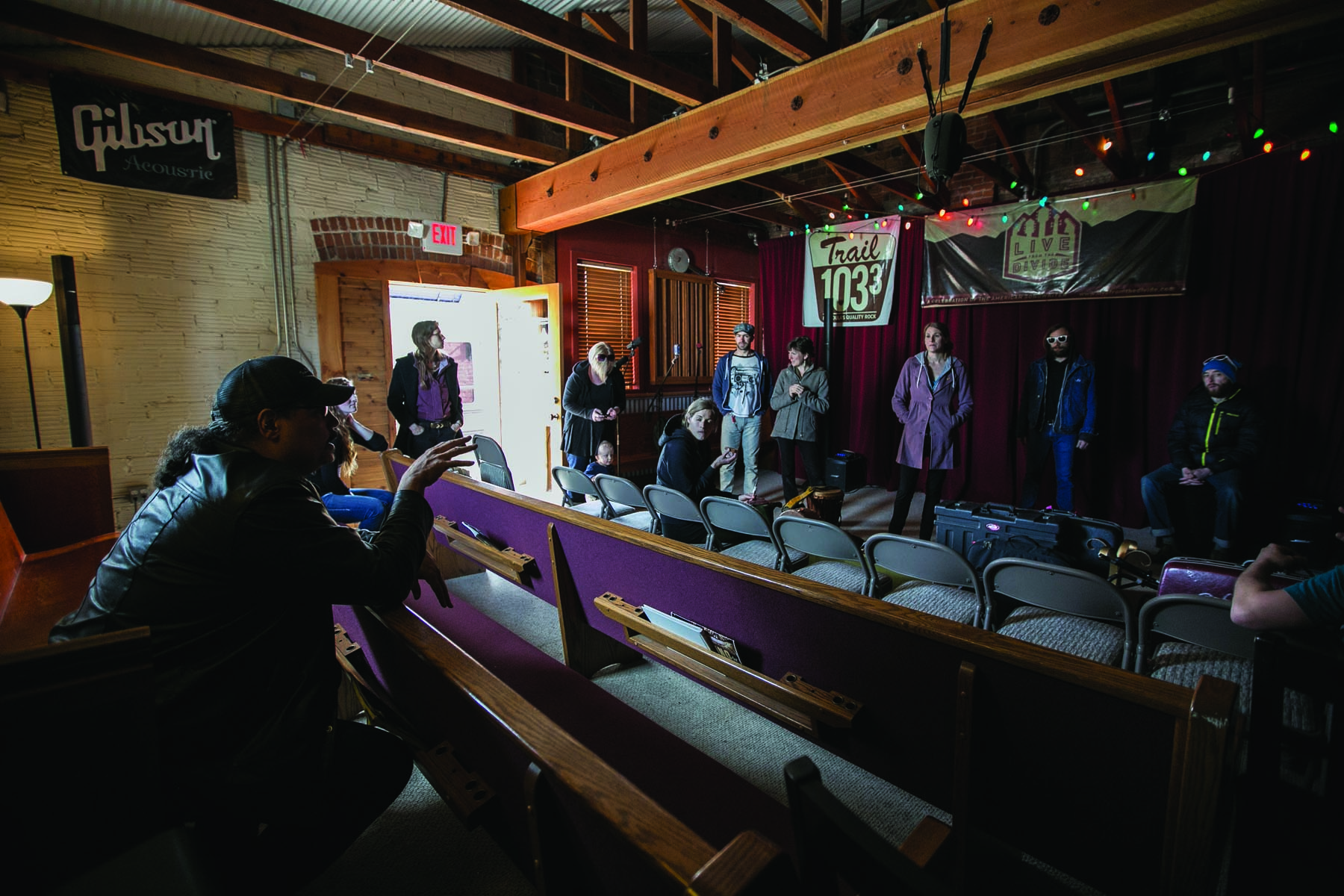 Executive producer Doc Wiley goes over the night’s schedule with the Shook Twins, an indie-folk band from Portland, Ore. 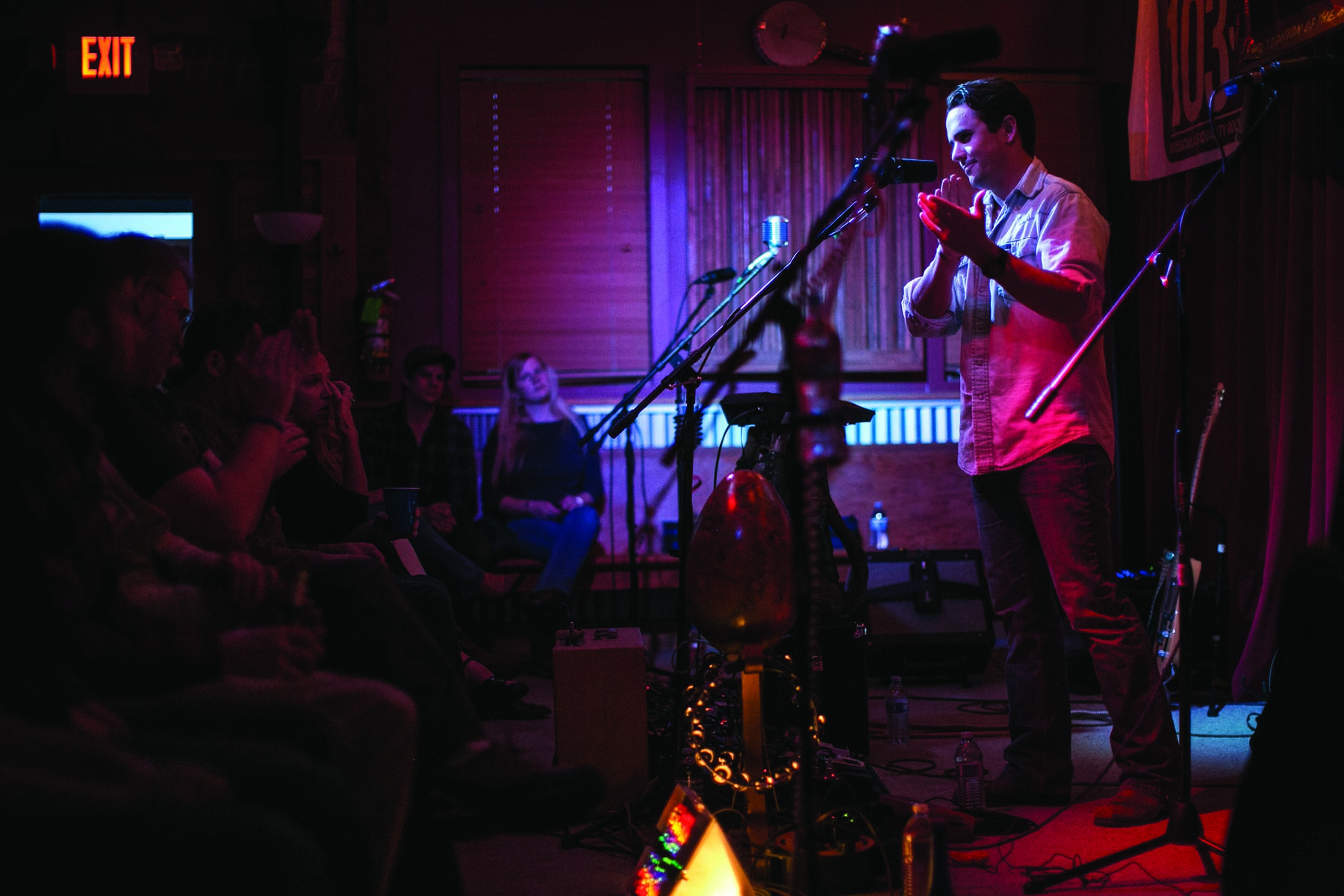 Producer Jason Wickens introduces the band from the Live From the Divide stage. 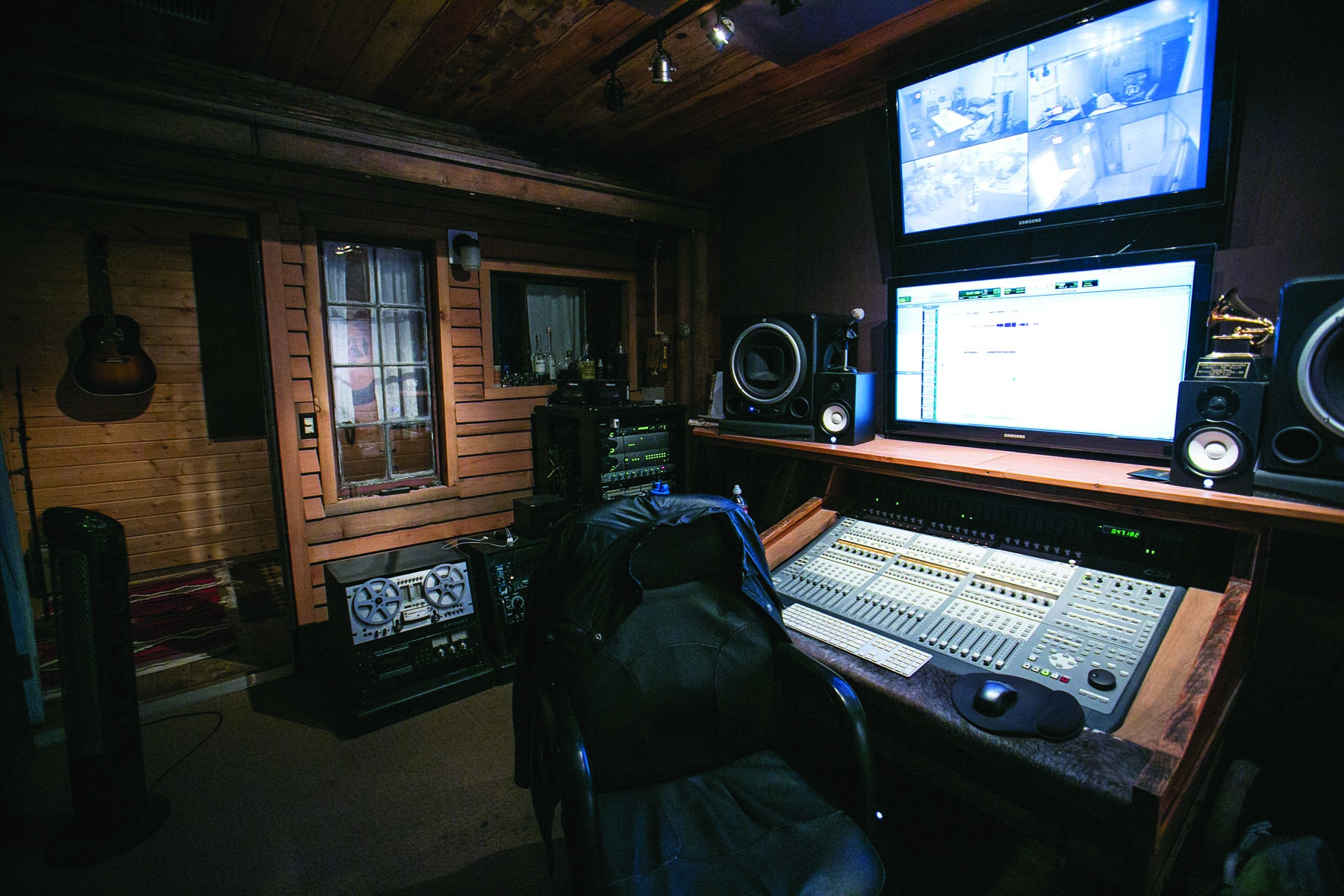 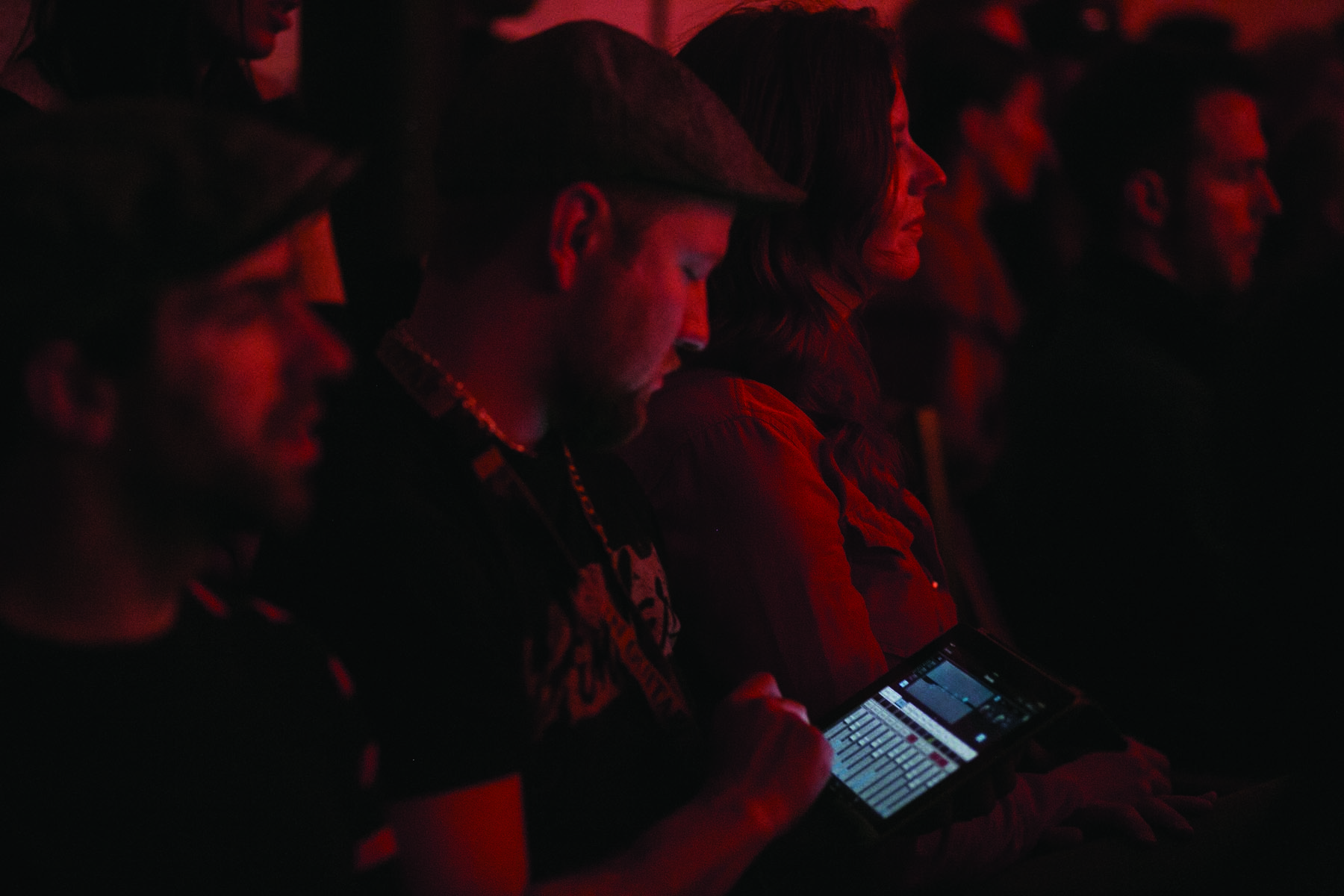 Engineer R.J. Hatten mixes the live performance from an iPad in the audience. 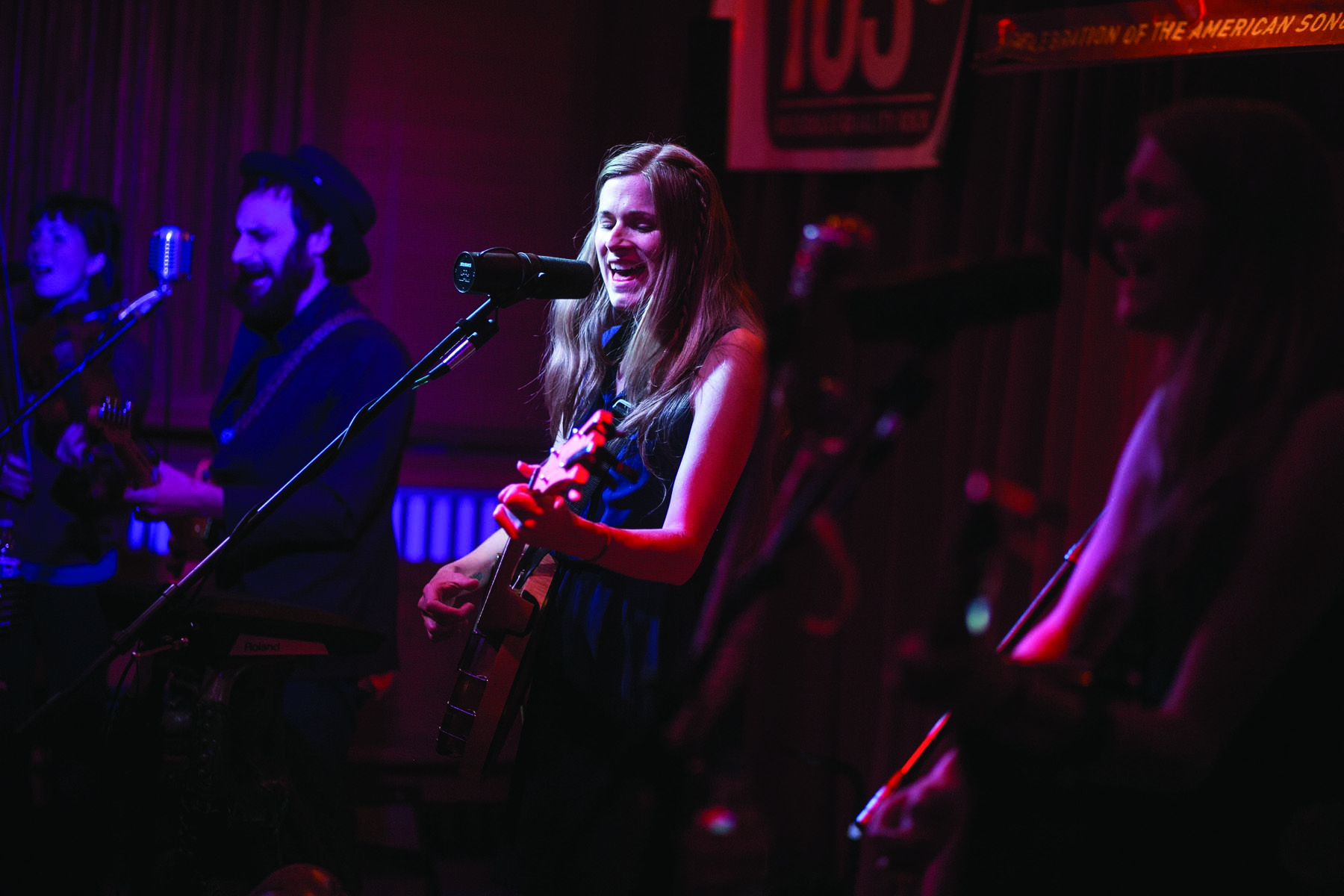 The Shook Twins perform for a packed house last May at Live From the Divide. The show was recorded and will be archived for future release on the radio and the Internet. 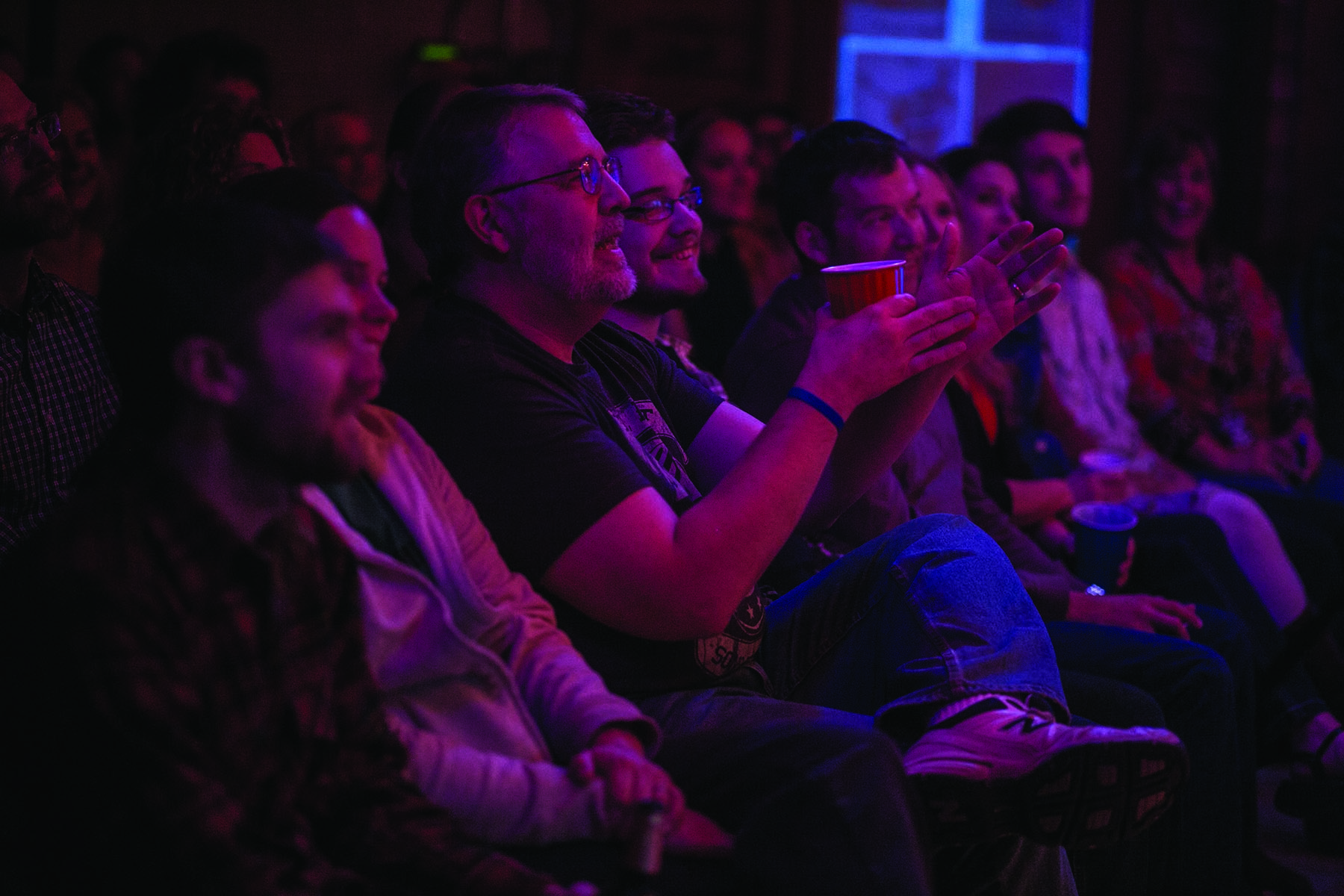 Sold-out shows are routine at the intimate, 50-seat venue where Live From the Divide is recorded. The program offers a rare opportunity to see and hear artists on a personal level.

The crowd starts to gather in the performance space where each Live From the Divide episode is recorded.