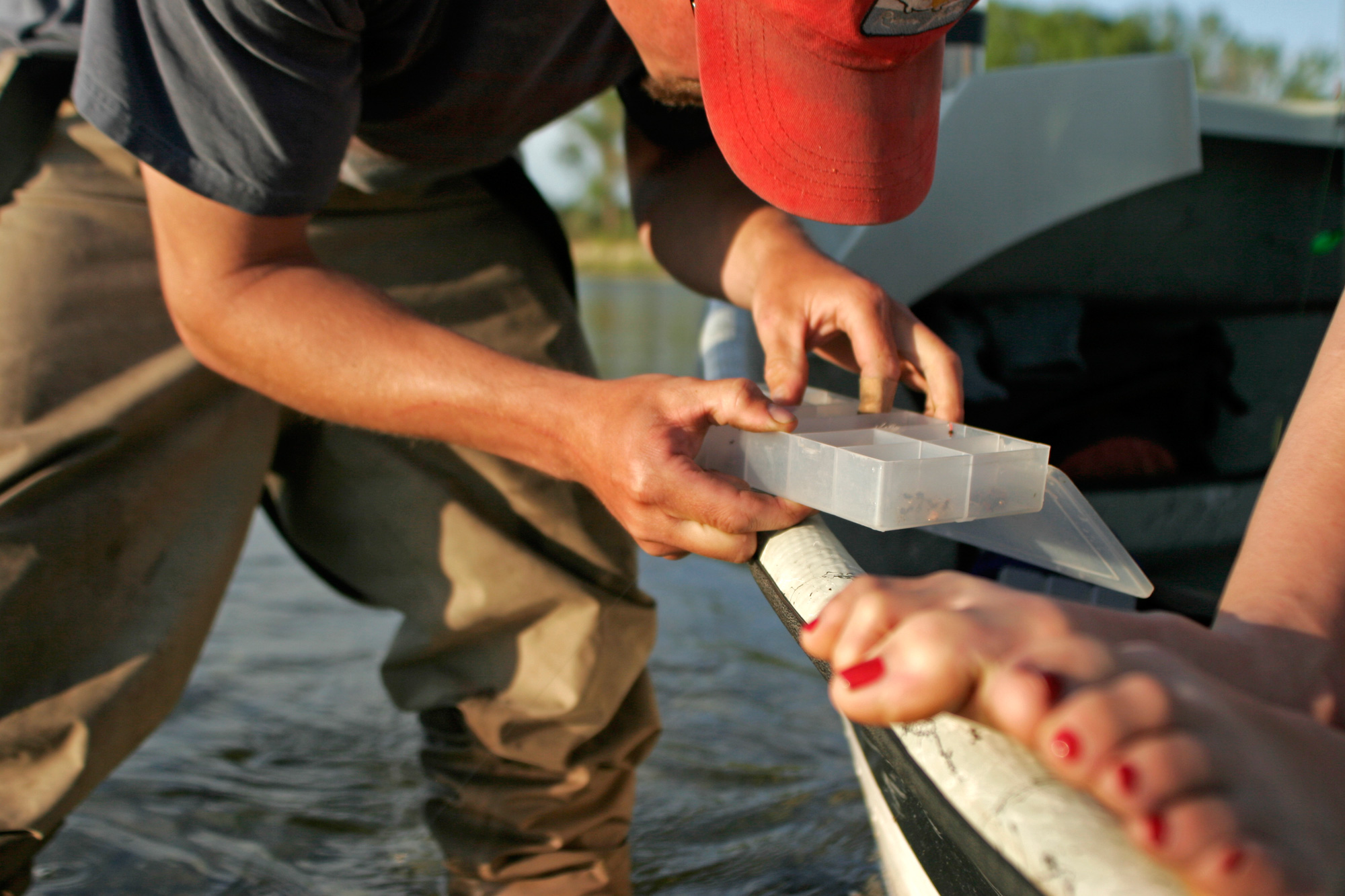 24 Jul Put Your Skirt On

I CAUGHT MY FIRST FISH ON A FLY while wearing a skirt and carrying a handbag. But that was irrelevant to the little rainbow. He gobbled the fly on my second cast, surprising both of us, and wiggled to shore at the end of the line. As I let him go, I was struck by two things: first, there was a hook skewered through my finger, and second, that might be a handy excuse for any excited shrieks still echoing off the canyon walls.

There’s nothing too remarkable about catching your first fish in Montana, except that I had been avoiding it for more than a decade. My husband is an obsessed fly fisherman who frequently comes home late, probably soaked, possibly bleeding, after a day of harassing trout in the Bitterroot Mountains. Few families could support two such obsessions. Somebody has to keep the kids alive.

There’s not much room for distraction when you’re supervising young children in the backcountry. Outside of the usual hazards like gravity and bears, there are the streams themselves. Almost any creek poses a hazard to a kid with an 18-inch inseam. And fly fishing requires focusing both eyeballs on an invisible bug at the end of an invisible line. When we go hiking, my husband sees pools and runs and riffles; I see drowning hazards.

Not fishing in the Bitterroot Valley is kind of like not mountain biking in Moab. We pass three fishing access sites on the way to the grocery store, four on the way to the library. Our school shares a sign with the fly shop. And even the birds fish. Ospreys are a common sight, bald eagles a treat though not exactly a surprise. But over the years, I began to view not fishing as something of an accomplishment in itself. Surely I had followed the evolution of catch-and-release fishing to its natural conclusion — not even catching.

As the kids grew older, I started buying a fishing license for not fishing. They wanted to carry their tiny licensed-character fishing poles up the trail to practice casting into the creek. We used no hooks, flies, or bait — a “waste of worms,” according to my youngest son. Instead, I tied a plastic fish, bug, or bobber on the end and let them at it. Under Montana law, we may have even been fishing. But no fish was harmed unless he got bopped on the head with a bobber.

All the while, I watched like a hawk, or perhaps an osprey, calculating the depth and speed of the water and the relative danger to my offspring. And when the boys got tired of casting, we watched for ouzels, skipped rocks, and waded in the creek until we got “footsicles.”

That was enough. Though sacrificing my husband to fly fishing made me a bit testy at times, I was immune to its allure. The kids were satisfied with casting and occasionally pulling in one of my husband’s fish.

But kids grow and change and eventually insist on doing things for themselves. And as they learn how to keep themselves safe, you should let them. My oldest son began to lobby for his own fly rod, and he was determined to join his dad’s previously solo missions.

But one day last summer we took a walk along a tributary of the Gallatin River, and I found myself carrying my husband’s fly-fishing stuff while he caught up with the rest of our group. I was slightly dressed up by Montana standards, but my skirt and sandals were made for hiking, and my handbag contained a water bottle, pepper spray, and a Montana resident fishing license. It’s good to be prepared.

From habit, I calculated the depth and speed of the water and the chance of rescue for my boys: shallow, slow, and 100 percent. But this time, instead of giving the kids a chance to practice casting, I decided to try it myself. Just a flick of the wrist, probably all wrong, but within seconds, I was hauling in a slippery little flash of silver, my first fish since the worm-and-bobber days of childhood. There was just enough time for an astonished photo before I released him, with an apology and a motherly admonition to not be so gullible next time.

And in that moment, I got it. I understood that I didn’t have to be an amateur entomologist wearing the proper gear, making a perfect cast, and using an ideal fly to catch a fish and have fun doing it. Obsession, while useful to those seeking perfection, is simply not required.

So I gave up not fishing. And one day last fall, I caught six cutthroats during morning kindergarten. I wasn’t wearing a skirt, but I could have been.