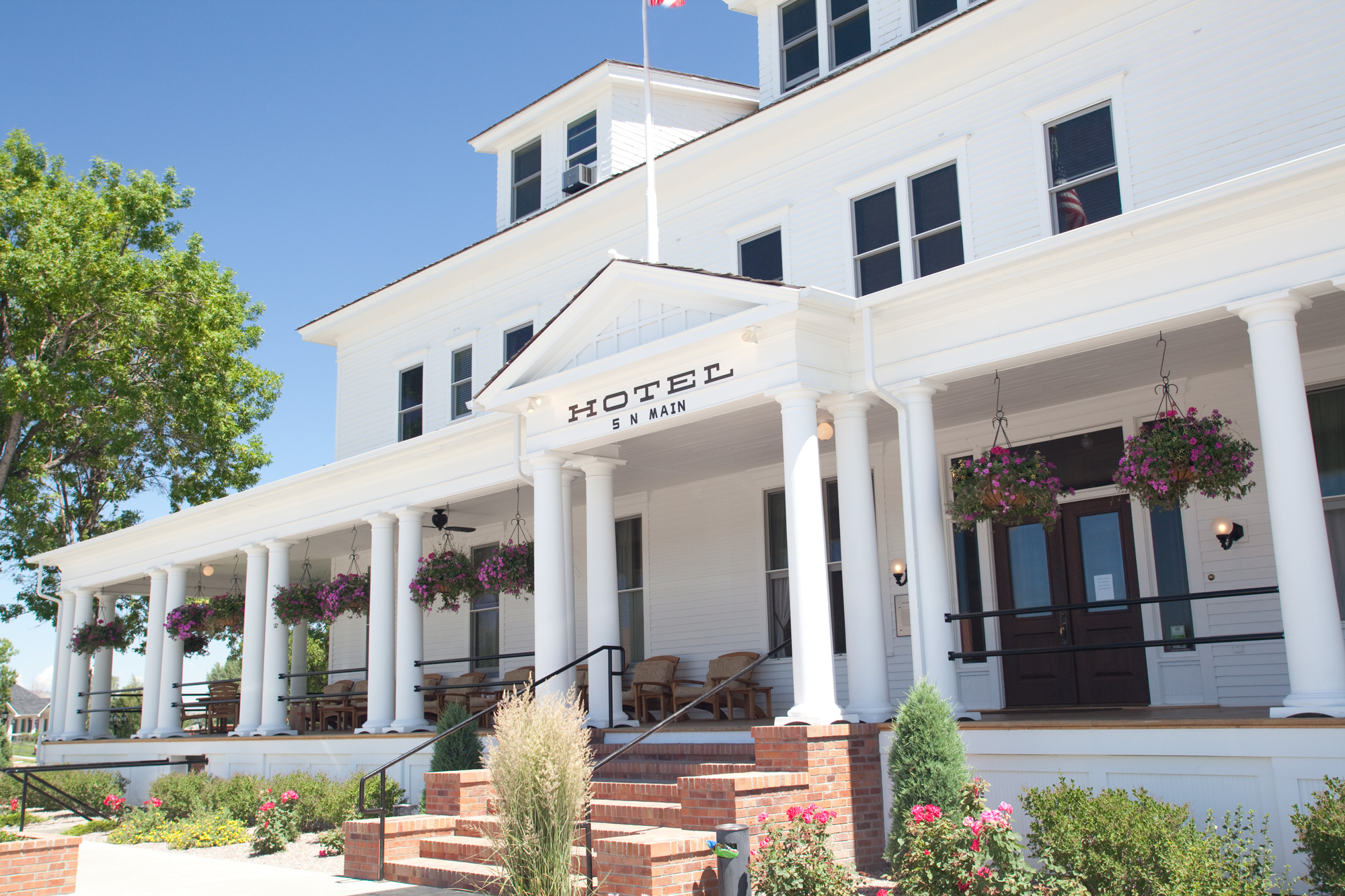 Matt Isreal, head chef at Pompey’s Grill in the historic Sacajawea Hotel, doesn’t play dress up with his words the way most talented chefs do. Even so, you get the feeling he secretly writes poetry about food. Or perhaps food is his poetry.

“I just like to cook,” he says, as if he were an accountant who makes spaghetti for the kids one night a month.

But get him behind kitchen doors, and you’ll discover he cuts and trims his steaks by hand. He dusts his calamari with cornmeal and masa, flash-fries it, and serves it with a chipotle honey beurre blanc.

He takes a Maple Leaf Farms duck breast, scores it and sears it slowly, rendering the succulent fat. Then he oven roasts it a little past medium rare, slices it, and deglazes the pan with a blueberry, onion and Serrano pepper salsita.

All that flair, and Matt still offers his culinary history almost entirely devoid of adjectives.

At 15, he pried his way into the restaurant industry washing dishes at the foodie-famous Showthyme in Big Fork, Mont. Showthyme’s chef, Blue Funk, found him prodigious and promoted him to the rank of sous chef at age 19. At 26, Israel moved to Kalispell to serve as executive chef of the entire Hilton property, including its Blue Canyon Grill.

It’s an impressive story even when it reads like a textbook, but when the topic turns to Pompey’s, Matt shows glimmers of the poet.

“The hotel, the history, that’s what drew me down here. The spark in the owner’s eyes just captured me. There was passion behind [“the Sac”]. A vision,” he says.

That was in 2009, a year when the building was a vision and little else. In its 100-year history, the Sacajawea Hotel had changed owners, gone in and out of business, been renovated and left vacant — a place incurably tangled with Montana’s own history of fits and starts, booms and busts.

When he arrived, “the kitchen was a train wreck,” Israel says. “The dining room was in shambles. We ripped up the floor and raised it 6 inches. We redesigned everything — the tables, the carpet, the coverings and the plates, the forks and the knives — everything.”

The renovation and naming of Pompey’s Grill was sensitive to the Sac’s past, and to the history of the area. Lewis and Clark arrived at the Missouri headwaters in July of 1805. With them was Sacajawea, and her infant son Jean Baptiste, whom Clark nicknamed his “little dancing boy, Pompey.”

At the convergence of the Gallatin, the Madison and the Jefferson, towns rose and fell. But by the time the Sacajawea Hotel was founded in 1910, Three Forks had become a bustling hub of commerce along the Milwaukee Railroad. It was the last whistlestop for tourists headed to Yellowstone National Park.

A purchasing agent for the railroad named John Quincy Adams (no relation to the sixth president) bought the old Three Forks Hotel building and rolled it on logs with teams of horses until it reached its current location — across the street from what was once the train depot.

The Sac was swamped with business until 1927, when the rail line was extended to Gallatin Gateway, relieving Three Forks of its Yellowstone tourism traffic. The hotel was dealt an enormous financial blow, and over the years it went from rocky transition to rocky transition. It seemed the hotel would never return to its former glory until Dean Folkvord, owner of Wheat Montana, a remarkably successful bakery and deli operation headquartered in Three Forks, bought it in 2009.

Folkvord invested substantial resources to fix it up, and his managers have done exceedingly well drawing guests with live music on Fridays and Saturdays, live poker at the Sac Bar in the basement, and, of course, the flavorful manifestations of Pompey’s Grill.

Israel calls it Americana in the sense that his restaurant is a melting pot. For him, flavor is king, and its kingdom knows no boundaries: geographic, political or even socioeconomic.

“Not everybody eats duck confit every day,” he says.

And so he offers the down-and-dirty side of fine dining: the bar menu. Here’s where he gets experimental, concocting wild iterations of classic American cuisine, with twists that might only fly in Three Forks, Mont.

The local favorite is known as the Sac Attack, an artful, artery-clogging rendition of the Big Mac. Two 5-ounce patties, cooked on the flat-top in homage to the original; each gets a slice of smoked gouda cheese. The resulting stack is topped with Napa cabbage coleslaw, finely diced white onion, capers and a secret sauce that is, well, secret.

“You’ll need patience and a lot of napkins,” he says.

The hodgepodge menu and history seem only to be outshined by the hodgepodge of architectural flourishes throughout the Sac.

From the street, the immaculate white structure looks decidedly Colonial. Great columns promenade in pairs along the covered, wraparound porch. On the porch, ceiling fans turn unhurriedly, seeming to channel the spirit of an old Southern plantation.

Inside, the lobby is fitted with a blend of styles: Mission, Craftsman, perhaps something akin to Art Deco geometry. Dark spruce beams divide a 14-foot ceiling, inlaid with wallpaper that marches in angular rebellion against the flowy Victorian florals of the 1800s. Simple chandeliers dangle from blocky chain links, and standing along the walls are the original gilded radiators.

Pompey’s main dining room, just off the lobby, has all the same original finishes. It is grand and eclectic and elegant, all without feeling pretentious — exactly as it should be, says Israel.

Pompey’s is a singular point where Montana’s past and present merge into one. It’s the kind of place where the food is poetry, the dress code is casual, and the bar has beds.

Method: In a food processer, combine everything but the olive oil and pulse to break it down. With the processor running, slowly add in the olive oil until you have reached the desired consistency … not too thick, not too thin.

With a mortar and pestle, grind the salt, peppercorns, garlic, smoked paprika and onion. Trim any membrane or silver skin off the cheeks. Evenly season both sides of the halibut cheeks and dredge them in the flour, making sure to knock off any excess.

In a small sauce pot, add the lemon juice and white wine. Cook over medium flame until the liquid has reduced down to a quarter of the initial volume. Add the heavy cream and simmer the sauce base until it has reduced down by three-quarters. Turn the heat down and slowly emulsify the butter into the sauce one or two cubes at a time until gone. Whisk in the mustard and capers. Season with salt and pepper to taste. Note: If the sauce boils or gets too hot, it will break down.

Place a large cast iron skillet or heavy bottomed sauté pan over a medium flame; add the olive oil and butter. When the butter has melted and is starting to lightly brown, add the halibut cheeks. Depending on the thickness of the cheeks, they need to sear for about 2-3 minutes on each side. Transfer to a warm plate.

Using the pan the cheeks were cooked in, sauté the potatoes with the desired amount of pesto. When the salad is warmed through, toss in the spinach and cook until just wilted. Finish by seasoning with salt and pepper.

Patrons relax and enjoy the view from the front porch of the Sacajawea Hotel. The hotel’s facade seems to channel the spirit of an old Southern plantation. 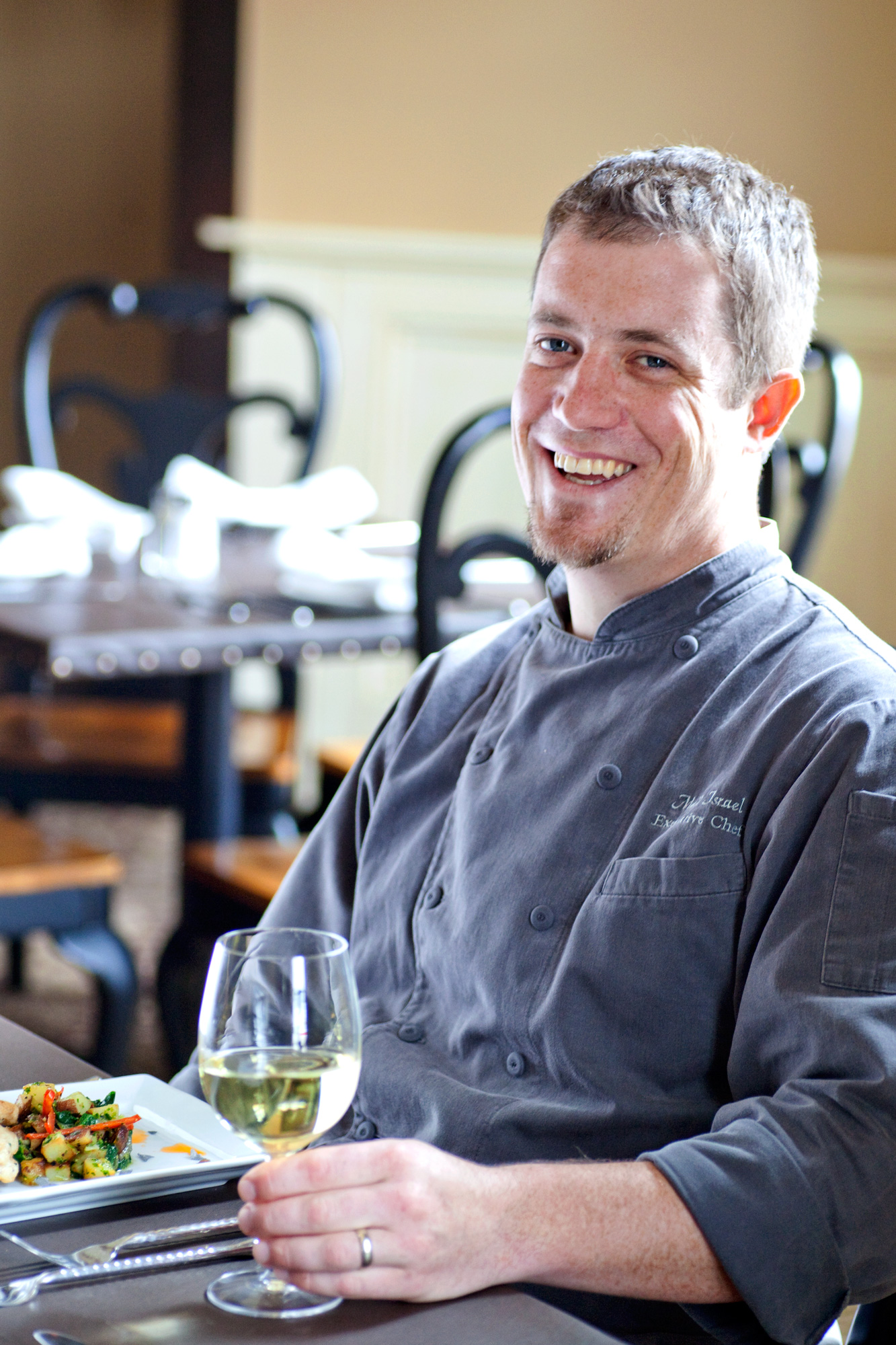 The Thai Chicken Lollypops are a popular appetizer that is featured on the menu year round. The elegant dining room was once part of the original Three Forks Hotel that was moved to the existing location in 1909. 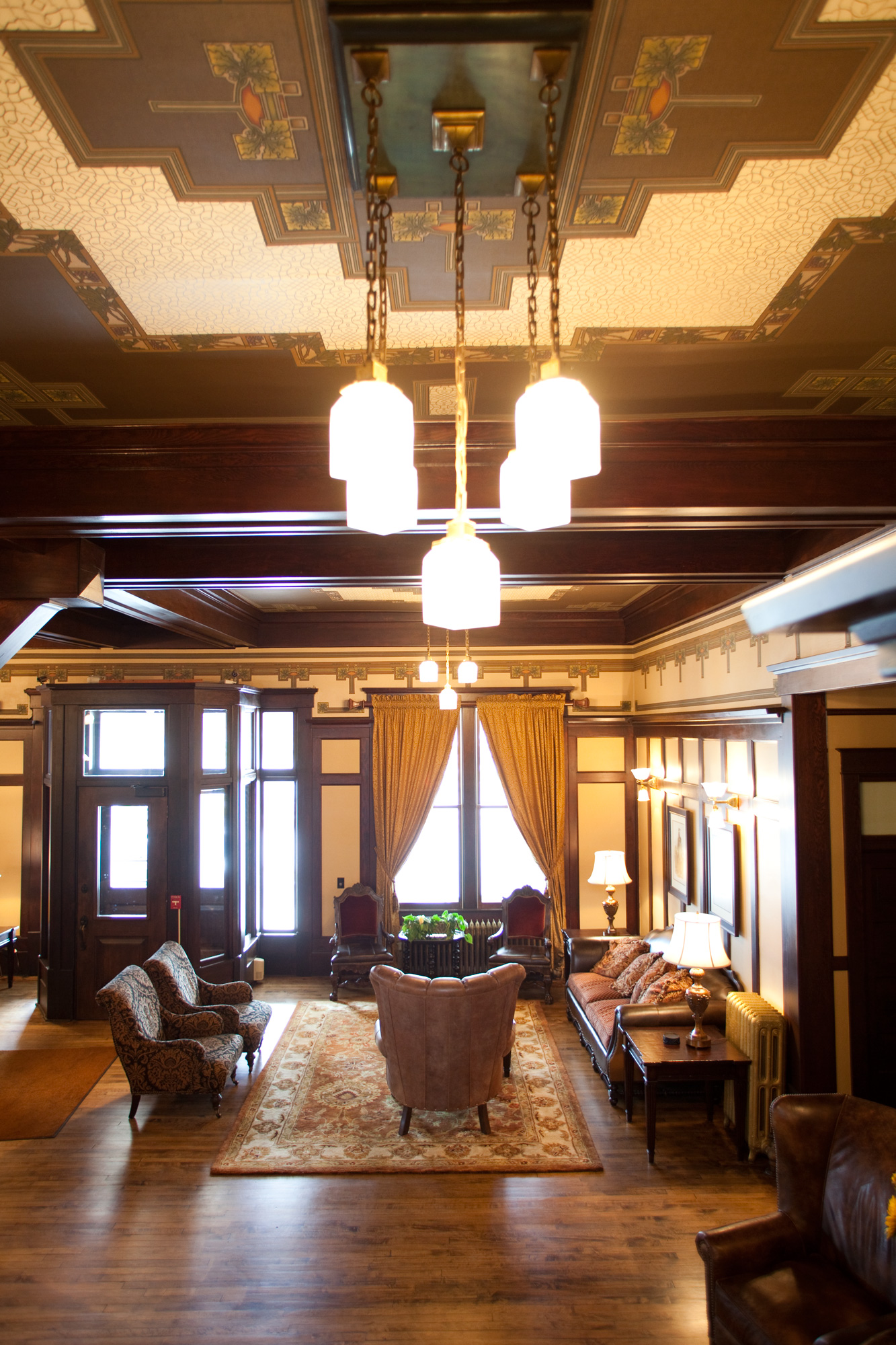 The ceiling of the main lobby is decorated with vintage wallpaper, and all of the wood work, as well as the ceiling light fixtures, are original. 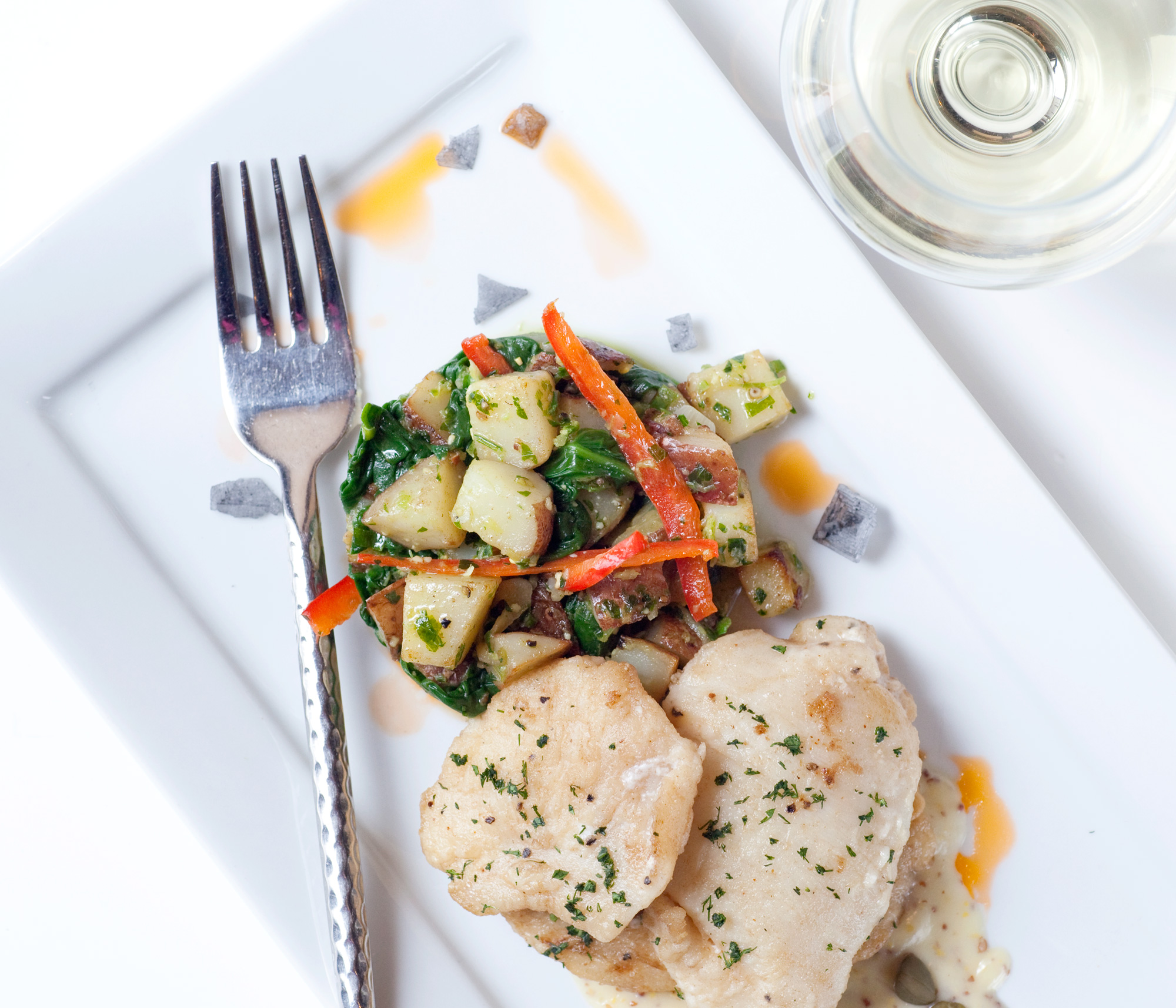