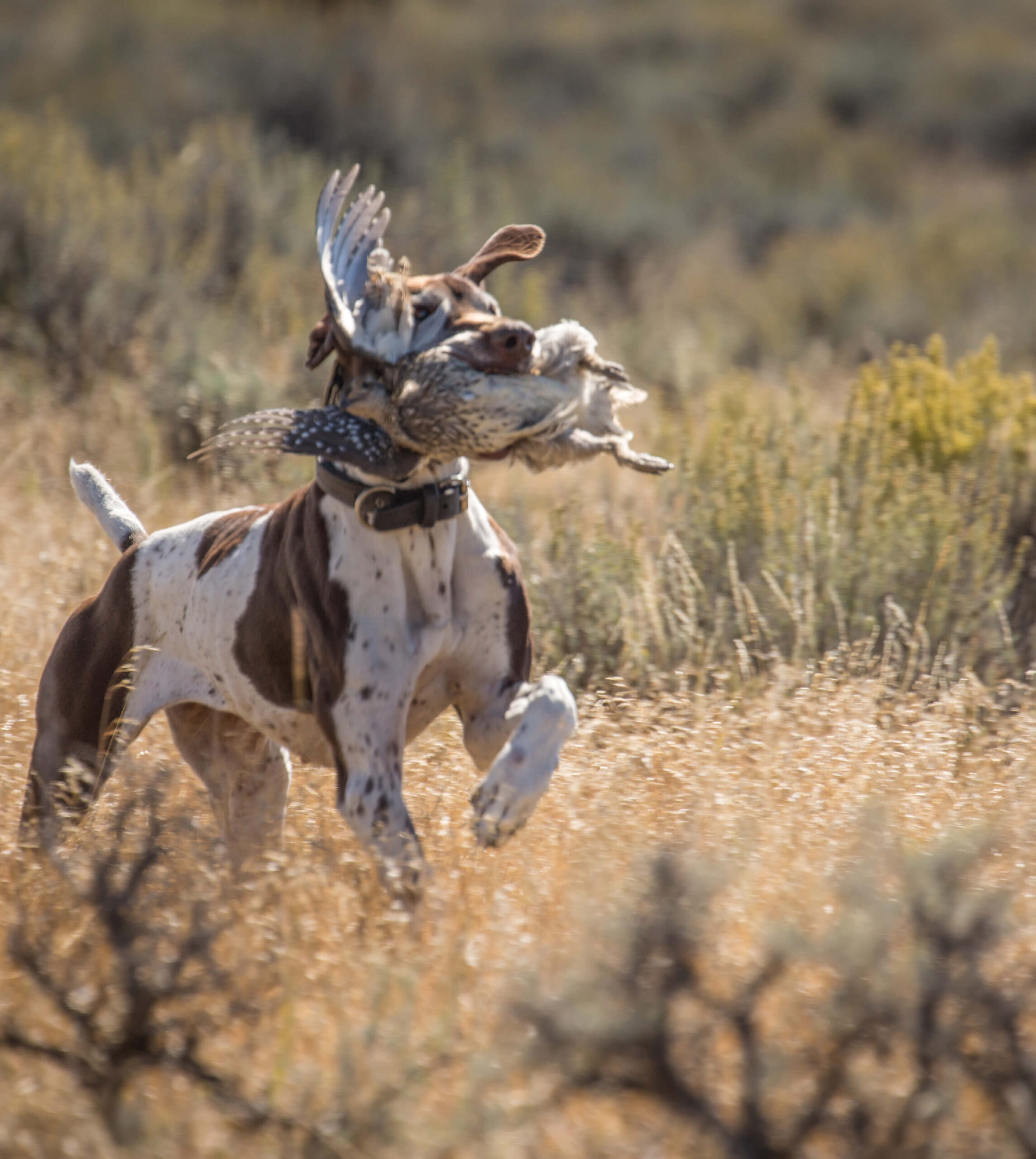 An eager bird dog retrieves a grouse. While sharptails and Huns are easier to recover than pheasants, a pointing dog that can also retrieve is a huge asset.

28 Sep Pointers on the Prairie

I take SPACE to be the central fact to man born in America…
I spell it large because it comes large here.
—Charles Olson, Call Me Ishmael: A Study Of Melville

I know of no hunting venue that reinforces the sense of companionship between hunter and dog more powerfully than the Montana prairie.

I often remember author Charles Olson’s grand opening line to Call Me Ishmael during a long hike through typical Montana bird cover. The prairie and the sky above it emphasize one’s cosmic insignificance, just like an endless canopy of stars overhead on a clear winter night. Today, I’m hiking a remote section of public land in central Montana. It’s absent of all evidence of human intrusion, save for an occasional livestock fence that’s old and weathered enough to have become part of a landscape largely unchanged since Lewis and Clark first described it in their journals. 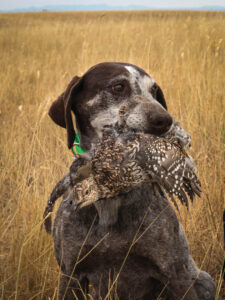 Maggie, the author’s German wirehaired pointer, holds a sharptail grouse that she retrieved.

Technically I’m alone, at least with respect to human company. There’s a difference between being alone and being lonely though, especially when I’m accompanied by one of my bird dogs. For this outing, the honor falls to Maggie, my middle-aged female German wirehaired pointer. Actually, as the grayness of her muzzle indicates, she’s older than that, although no one has bothered to tell her. Determined not to go gentle into that good night, she still hunts with the enthusiasm of an eager puppy, and it doesn’t seem like long ago that she was all awkward legs, floppy ears, and half her current size. I suspect this is the subconscious reason I chose her to accompany me today rather than one of my younger dogs. I don’t know how many seasons Maggie and I have left together.

Our quarry on this warm September morning is twofold: sharp-tailed grouse and Hungarian (technically gray) partridge, or Huns as they’re often called. Picking a favorite between these two autumn standbys would be difficult. Huns offer more explosive rises and challenging shooting, and they’ve long been a personal favorite on the dining table. However, like ring-necked pheasants, they’re alien imports from the Old World, while the sharptails truly belong here, as first described for Western science by Captain William Clark in 1804. 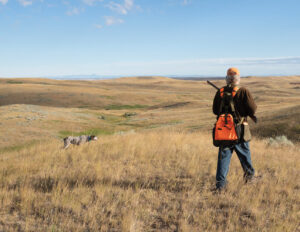 In large prairie landscapes, game birds can be almost anywhere. A dog that’s capable of locating them for you can be invaluable.

The important point today is that both species are wonderful to hunt with pointing dogs. In this regard, they provide an interesting contrast to pheasants, which are widely regarded as the West’s most popular gamebird. Often preferring to run rather than fly, pheasants rarely “hold” a point like grouse and partridge. Because of their habitat preferences, an experienced pheasant hunter can usually look at an expanse of cover and identify the 10 percent of it that holds 90 percent of the birds. Open-country grouse and partridge, in contrast, can be almost anywhere in vast prairie habitat, and a hard-working bird dog will always find more of them than I will on my own.

Now, Maggie has disappeared behind a large clump of silver buffaloberry without emerging from the other side. Working cautiously around the brush, I find what I hoped to: Maggie stretched out just above the ground — as rigid as if she’d been struck by a taser — with her nose pointed straight down into the grass in front of her and a docked tail quivering at the other end. She’s found the birds; the rest is now up to me. 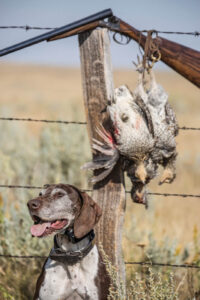 Upland game dogs come from many breeds, divisible into two general categories. Flushing dogs, including a variety of retrievers and spaniels, simply find birds and get them airborne within shotgun range, while pointing dogs (“English” pointers, German shorthairs and wirehairs, setters, and Brittany spaniels, among others) do just what Maggie is doing now. In addition to locating birds in big country, they show the hunter exactly where they are and hold them in position, allowing for controlled shots at a reasonable range. I’ve hunted with both kinds of dogs for decades and still do.

While almost any dog with a nose and four legs can become a flushing dog, pointing has a highly specialized job description. One can teach a pointing dog to range properly, hold points, and look stylish, but one cannot teach a dog to point, which is purely a matter of instinct. They either have it or they don’t, and that makes a point something of a miracle in my eyes. Long ago, European hunters began to notice this trait appearing randomly in a variety of modern pointing dogs’ ancestors, and generations of selective breeding led to the refinements we enjoy today. While two of our three most popular retrieving breeds arose here in North America, most pointing breeds can be traced back to Europe. From pheasants to German shorthairs, we are indeed a nation of immigrants.

Maggie holds a point while the author walks toward a covey of Huns that the dog has located.

Because of my enthusiasm for hunting waterfowl, my kennel has been home to Labrador retrievers for as long as I can remember. While Labs are widely regarded as duck-fetching specialists, they can also be very effective at flushing birds in upland cover, especially when pheasants are the quarry. I’ve shot plenty of upland birds with my Labs, and if I had to bet someone that I could shoot a limit of pheasants from a nasty patch of cover, I might well take one of my Labs with me.

However, there is more to successful upland wing-shooting than lots of birds to clean at the end of the day. When it comes to intangibles like pageantry and tradition, nothing can rival hunting with a dog that points, and this is why my Labs usually have to wait for duck season to open in order to come into their own every autumn. I’ve always been a sucker for inexplicable marvels, whether the subject is the creation of the cosmos or an old dog trying to help me secure a gamebird dinner.

Any relationship with a bird dog will be most satisfying when you’ve raised and trained the dog yourself. No matter how technically impressive a performance by someone else’s dog may be, it will always be just that — someone else’s dog to be admired rather than loved. However, a bird dog is a major responsibility that should not be taken lightly. They need sufficient space to run far and often. You will need time and knowledge in order to train one (although assistance from a professional can help, especially for those without prior experience). If you can’t provide all of this, go to the pound and pick up a rescue dog as a companion.

Maggie is on point in short native grass next to the brush, an intermediate habitat that could hold either sharptails or Huns (or pheasants or sage grouse, for that matter, although that would be less likely). Whatever the case, Maggie’s body language tells me the birds aren’t sneaking away on the ground, and I’m within shotgun range as soon as I round the buffaloberry. “Steady, steady,” I encourage soothingly, for a pointer isn’t supposed to stop pointing until permission is granted. With the barrels of my 20-gauge aimed toward the sky, I thumb the safety back and forth and walk in behind Maggie.

Huns it is! A sudden eruption of wings announces their identity, for Huns are Montana’s only true covey gamebird, and all 15 of these flush as one. While it’s not unusual to find grouse and pheasants in groups, they almost always stagger their rises, at least briefly. The trick to effective shooting on a covey rise is to focus on one bird, to the exclusion of all others, and maintain that concentration until it’s either dead or gone. Never worry about your second shot until you’ve taken care of business with your first.

And that’s exactly what I did, feeling gratified (and perhaps a bit lucky) to complete the double on a bird that’s nearly out of range. Breaking my shotgun open to ensure safety, I glance down at Maggie, who has done exactly what she was supposed to do: nothing. A dog that runs around wildly when birds are in the air and shots are firing is both a distraction and a hazard. Teaching repression of this instinctive behavior is called making the dog “steady to wing and shot.” Maggie learned these lessons many seasons ago, and I’m pleased to see that she hasn’t forgotten them over the long summer.

Finally, I issue the command she’s been waiting for: “Fetch!” Some, but by no means all, pointers will retrieve, and to defy stereotypes further, some retrievers will point. Maggie is an excellent retriever, as long as she stays on dry land (her career as a duck dog lasted less than one morning). I regard hunting pheasants without a capable retriever as borderline unethical, since a wounded rooster can be practically impossible to recover without a dog. Huns and sharptails aren’t nearly as evasive, but I still enjoy giving my wirehairs the opportunity to finish what they started after the shooting is over.

Once Maggie has delivered the second Hun to my hand, I find a spot in the shade, fill a collapsible bowl with water from the canteen in my game vest, and sit down to watch her lap it up. Even though she’s still panting from the heat and exertion, she’s soon pacing around me in circles and prodding me to resume the hunt. I finally coax her to my side and convince her to “sit a spell,” as my Texas ancestors would have put it. I’m also eager to find more game, but a quiet moment with my dog somehow seems more important.

There will always be more birds, but I don’t know how much more time remains for me to be with Maggie. 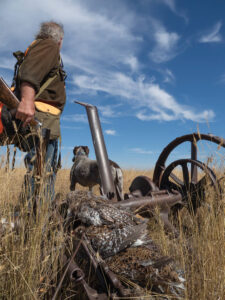 Maggie and the author take a breather after a long, hot morning in sharptail habitat.

The qualitative nature of the remarkable bond that develops between hunters and canine companions doesn’t vary much by the nature of the quarry or the breed of dog. However, choice of breeds is still an important decision, especially for a first-time bird-dog owner.

Pointers vs. Retrievers: Hunters interested solely in upland game will likely do best with a pointing dog, while waterfowl enthusiasts should opt for a Lab or a representative of another retrieving breed.

Versatility: This is important for most of us who hunt in the West, where a long season can involve everything from partridge in September to geese in January. I address the dilemma by having both pointers and retrievers in my kennel, but that’s not realistic for those without sufficient space. Hunters looking for one dog to do it all can’t go wrong with a versatile Lab, but I prefer pointers that can also retrieve, a job description nicely filled by German wirehairs, German shorthairs, and Brittany spaniels.