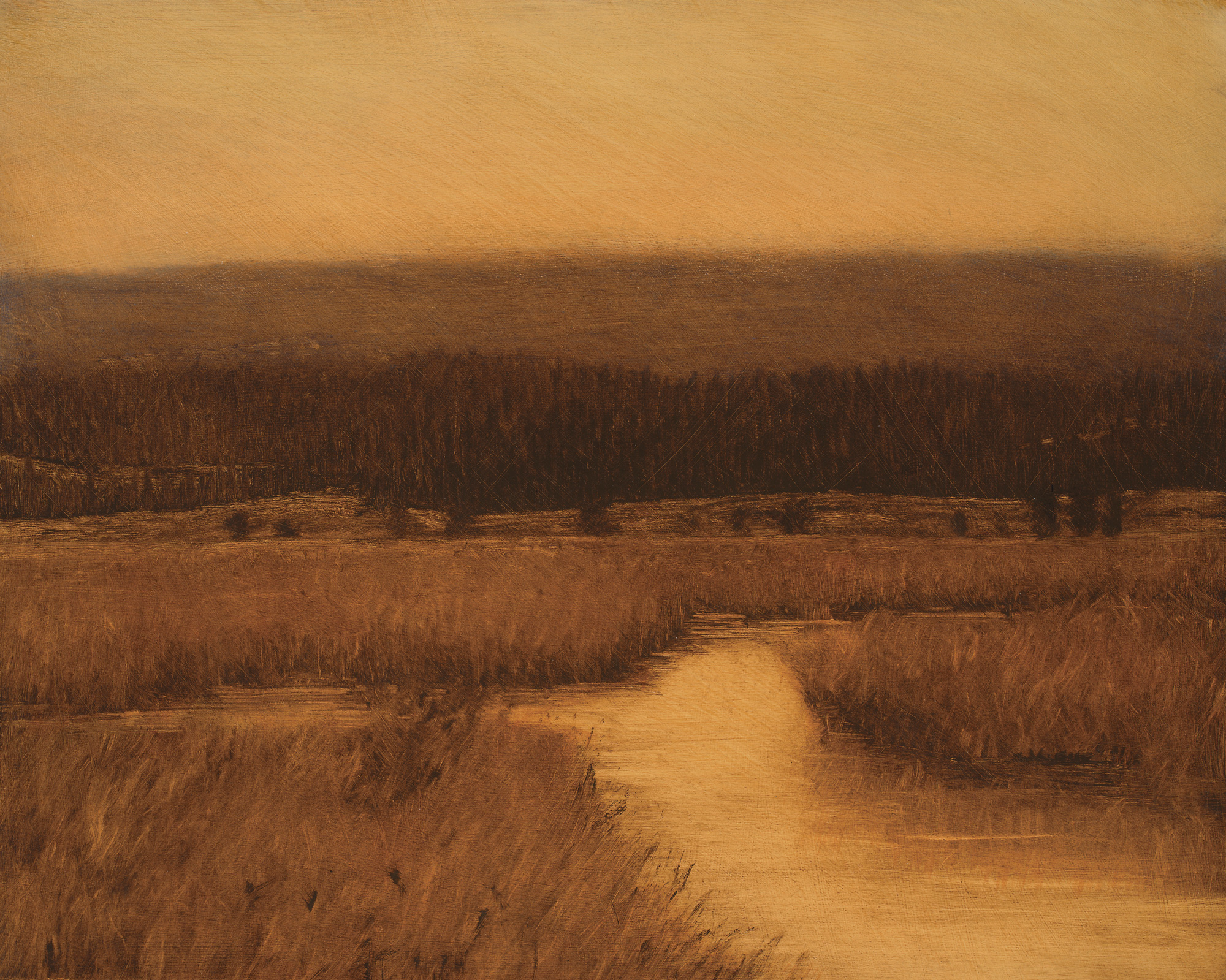 24 Jul Artist of the West: Poetry in Painting

LIKE A STANZA OF SPONTANEOUS POETRY, each one of Dave Hall’s oil paintings embodies a singular encounter, an internal landscape inspired by the physical experience of the setting. An emotional imprint of a snow-scattered hillside. A tender trace from that late afternoon standing thigh-high in a slow moving stream.

“From a strict sense, my process is always evolving,” Hall says. “I use a photo as a memory device. I can put myself back in the place where the picture was taken, but I look for the mood more than anything else.”

Hall is heart specific, rather than site specific.

“I’m the antithesis of the grid painter,” he says, referring to a technique used by some painters who break a photograph down into small squares in order to enlarge the exact image on the canvas. “But I’m at the opposite end of the spectrum from that. I use the photos as a starting point, as a way to remember. I don’t do a lot of plein air painting. I’ll use the photograph as a place to begin. Oftentimes, I’ll leave the photograph at home or let it fall to the ground.”

The end result resembles the original photo in temperament only.

“I’ve been called a mood painter,” he says. “I take that as a compliment. I think we all like to be moved by art. And I’ve also been called a tonalist; it sort of fits.”

The reason Hall is referred to as a tonalist, is mostly because of his continued use of a limited palette. By restricting his color choices he actually opens the piece up for interpretation. The limited amount of color also allows him to play with values, light and shadow, and distinguishes his work and his tendency to paint the land as seen through a fog.

“Basically I take a lot of photos when I’m fishing or hiking,” Hall says. “I keep a fairly large file of possibilities and a smaller file marked, ‘YES.’ Typically, I’ll click onto an early morning or dusk photograph and usually it’s low light, or really foggy. I love walks in the hills during snowstorms. It eliminates all the extraneous stuff in the background. For me it’s a gift of possibilities. I also carry a sketchbook and take notes.”

As a result his paintings catch the ethereal moment of nature, which in turn causes us to question ourselves. Hall’s paintings inform our own emotional connection to the landscape, much like the way every experience we have washes over us, barely noticeable at the time, but cumulatively makes us the person we’ve become.

“Dave Hall is painting a moment as much as anything,” Curtis Tierney, of Tierney Fine Art, in Bozeman, Mont., says. “People really love his work. Buyers and collectors are attached to his paintings because Dave is so connected to them and so his work has a very emotional appeal.”

Tierney represents Hall, and believes his paintings offer a great value in relation to the quality of the work and the price for which it sells. Not only does Hall deliver a masterful piece of art but his paintings are framed with unique water-gilded, karat-gold frames, a top-of-the-line style of framing.

“Hall’s work is like a mirror, offering the viewer a place to explore inwards,” Tierney says. “He’s capturing the essence of a landscape and reminding us of the reason people like to live in places like Montana.”

Because Hall loves to work with glazing, a technique that requires drying time between layers, he typically works on 15 to 20 paintings at a time.

“I go through periods where I’ll start an enormous number of paintings,” Hall says. “I come back and do a fair amount of glazing, after the main subject is there and I’m confident of the images. The glazing, which is like putting stained glass over everything, softens the edges. There may be six or seven series of glazes — which takes about three or four days — so I tend to have a lot going at any one time. Very rarely do I go start to finish on a painting.

With a kind of chicken and egg philosophy, Hall is drawn to places where the best work is done in low light. Painting or fly-fishing, he revels in the barely warm morning or the dusky dimming daylight. Although hard-pressed to find a connection between fishing and painting, Hall recently published a book entitled, Moving Water: An Artist’s Reflection on Fly Fishing and Friendship. The book falls somewhere between a coffee-table type folio of his paintings and a journal of his times on various fly-fishing expeditions. The entries are short, and stand alone narratives, but the consistency comes in the paintings and Hall’s perspective on his infatuation with both.

“Fly-fishing and painting are my passions,” he says, finally. “I’ve spent so much of my life thigh-deep in the water. I’ve learned to appreciate these times through my paint — the feel of place and time.”

Not formally schooled in art, Hall previously taught physics at a private high school, in Salt Lake City. About eight years ago, he took a leap of faith, quit his job and started to paint full time. He hasn’t looked back.

“By the time you get to be middle-aged you can count on the fingers of one hand the things in your life you’re most proud of; for me those all involved getting beyond fear,” Hall says. “When you get to be older if you know you’re scared, you know you have to do it. I knew I wanted to be an oil painter, a landscape painter and I knew the feeling I wanted.”

Hall grew up around family art — his father was a civil engineer and draftsman and his grandmother was a working artist for 60 years, in Boston newspapers in the 1920s, as a fashion illustrator.

“My great, great grandfather on my father’s side, a guy named Thomas Snow, was a Boston wine importer in the late 1800s, but his real passions were bird hunting, fly-fishing and oil painting,” Hall says. “I grew up around this family art, while it was scary to leave my teaching job, I knew I’d hate myself if I didn’t try to be a painter. Luckily, I’ve made a go of it. Knowing I had a family background in art was like getting permission to do it.”

At the moment, the painting on Hall’s easel is of a broad expanse, off a ridge with a view down to a valley.

“It’s nowhere but in my mind,” he says. “It’s a fairly large piece but it’s all done in one color, just darks and lights, it’s got a very strong ground of warm yellow and over that is an earthy brown. A lot of yellow comes through. A band of willows will be glazed in a warm subtle green. It’s monochromatic, but it works.”

Citing the color field artist Mark Rothko as one of his major influences, Hall’s work seeks to tell a story through the use of color and hues. Sifting his emotions like confectioner’s sugar over the image, blurring time and suffusing light, Hall manages to give us an interior narrative.

Hall paints the parts of the land that we can’t see. The way we feel when we cast our flies to the edge of a ripple, the sudden realization that something other than ourselves is present. Through his use of finding just the right amount of imagery and emotional lure, Hall gives us a place where we can return time and again, and with each visit we catch onto it differently.

“I don’t know why I paint,” Hall says, after a while. “It’s one of the things that makes this world and this life beautiful.”

Michele Corriel lives and writes in Montana’s Gallatin Valley. Her work is as varied as the life she’s led, from the rock/art scene in New York City to Rocky Mountain small town newspapers. The one constant in her work has been to learn from experiences and pass it on, in whatever form it avails itself. She has received a number of awards for her poetry and nonfiction over the last 20 years. 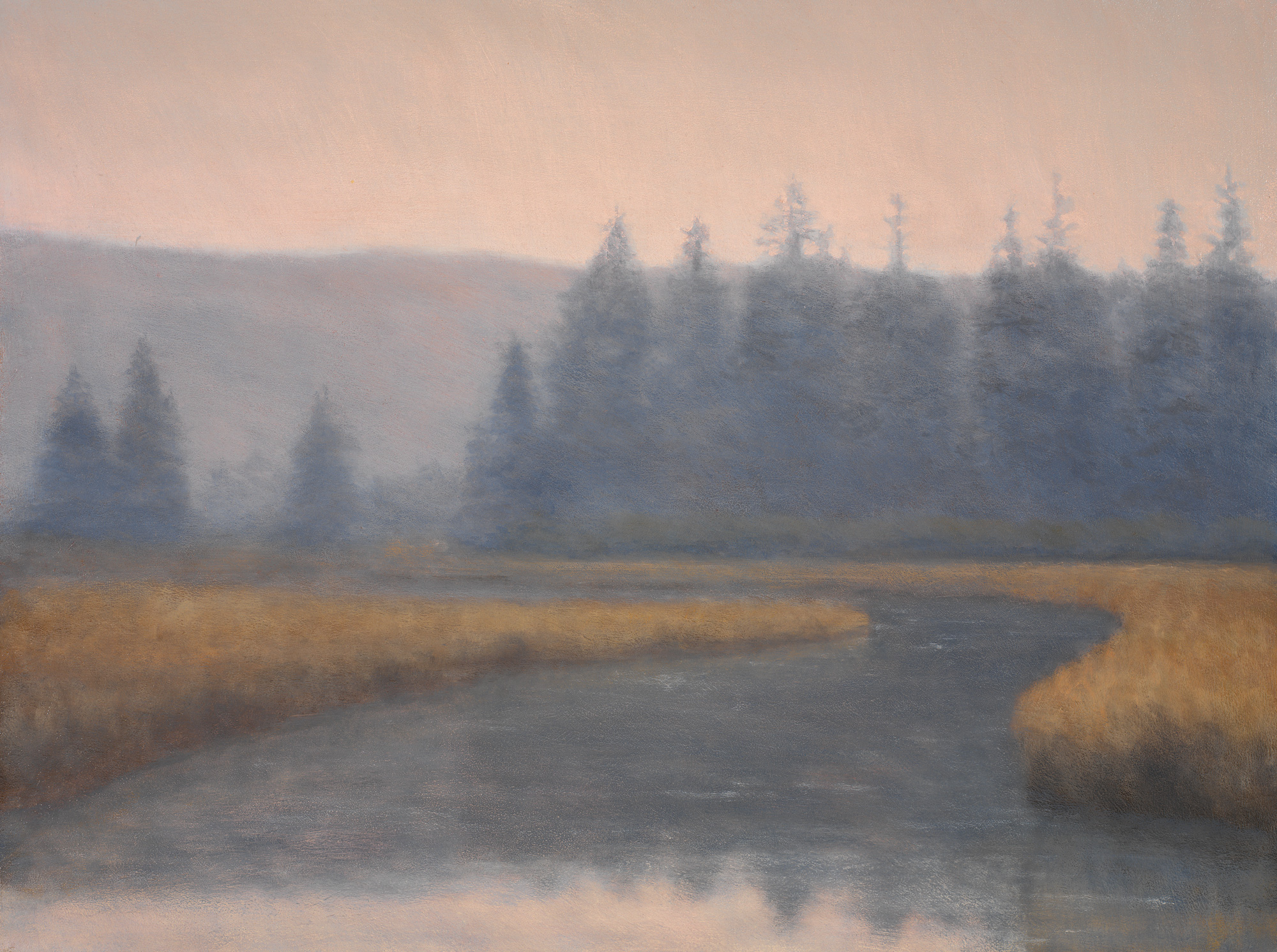 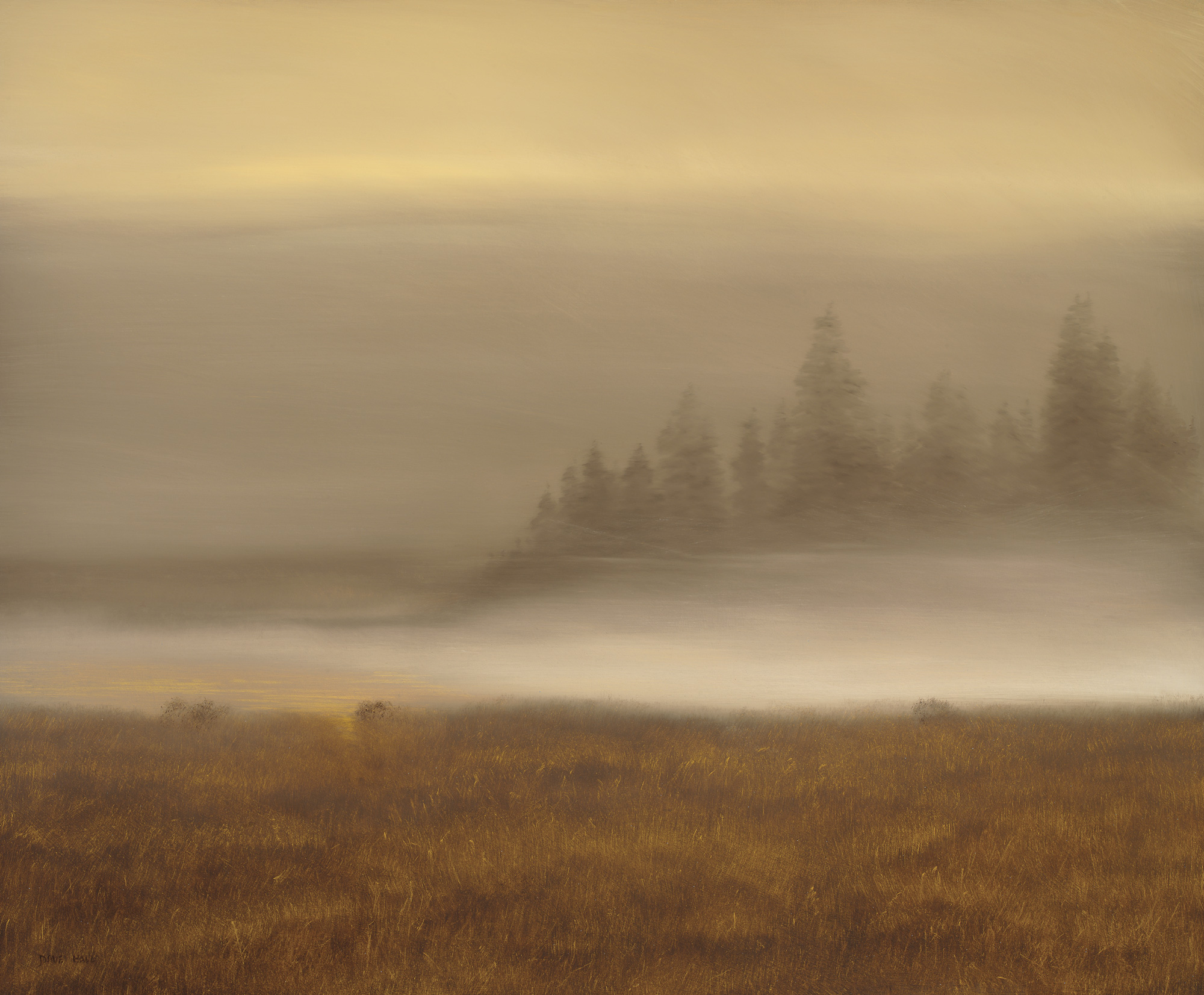