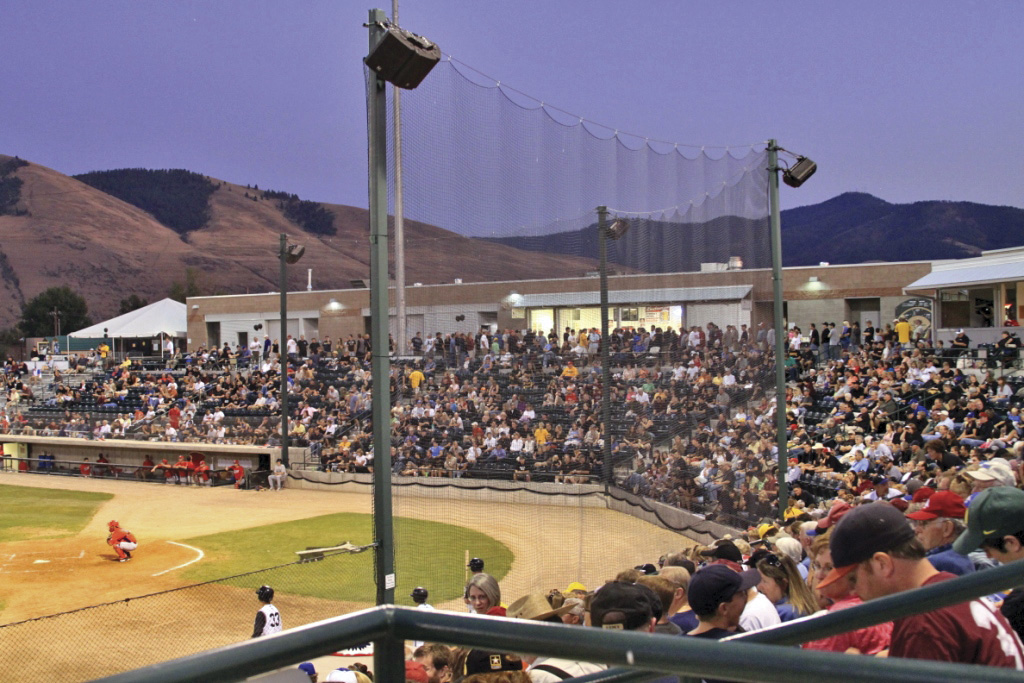 ANNOUNCER: Tyler Kuhn will lead off the game for the voyagers. Here’s the pitch, a fastball, Kuhn swings and there’s a base hit up the middle into centerfield. And that’s how this Pioneer League season begins …Good evening everybody, this is Garry Griffith coming to you from Centene Stadium in Great Falls live on KMON and it’s baseball season in Montana!

PRO BALL IS A CRUCIBLE for patience rewarded, hopes deferred and dreams deflated. My patience was re-rewarded during the summer of 2008 as I broadcast pro baseball games on KMON for the Great Falls Voyagers, the rookie affiliate of the Chicago White Sox in the Pioneer League. Re-rewarded because it was not my first run around the bases. Over the course of my career I have broadcast college baseball, football, and men’s and women’s basketball. But as a diehard aficionado, baseball strikes closest to my heart. Positions broadcasting in the Pioneer, South Atlantic, Carolina, and Southern Leagues evoke some of my greatest memories.

These days I am a professor at Francis Marion University in South Carolina, where I teach broadcasting in the communications department.

When Voyager’s general manager Jim Keough offered me a job to broadcast my favorite sport again for the summer of 2008, I packed up my family and drove cross-country for one of the sports’ shortest seasons, and one that will be forever in my memory. The job paid little, but it was broadcasting baseball — in Montana.

Jokingly, I asked Keough, could he provide work for my wife. “Sure, we’ll make her an usher at the ballpark,” answered Jim. “Can you work a 15-year-old (daughter Becky)?” I added. “We’ll put her in the concession stand,” was Jim’s reply. (Once in Great Falls Jim paid my 12-year-old son, Nathan, 50 cents per ball to retrieve batting practice balls hit over the fence.) Things fell into place and we hit the road.
ANNOUNCER: It’s the top of the third and the Pioneer League fans have packed the stadium for a tough battle between the Great Falls Voyagers and the Billings Mustangs. The score is 0 and 0.

A CHINESE PROVERB STATES “A journey of a thousand miles begins with one small step.” For a pro baseball player, the journey to the Majors begins in the Pioneer League. It is a short-season league that runs from June to early September. The Pioneer League started in 1939 and, except for suspending play from 1943-1945, has existed uninterrupted since that time. At its low point in 1964 the league consisted of four teams. By the late 1970s there were eight teams, which is what the league maintains to date. Since 1939 approximately 1,200 players have played in both the Pioneer League and the Major Leagues. In their short tenure as the ‘Voyagers’ since 2008, Great Falls has already produced one Major League player, pitcher Dan Hudson.

Four of the eight teams are in Montana: The Billings Mustangs, Great Falls Voyagers, Helena Brewers and Missoula Osprey. The four teams play significant roles in their respective towns. Jim Keough said a study conducted in 2002 showed that the Great Falls team helped generate approximately $2 million annually in revenue for the city. Visiting teams and scouts like the Chicago White Sox’s Jim Crawford pay for hotels and food. Local residents, visiting and home players also contribute money to the local economy through their expenditures. This extends to visitors from Canada who attend games in Great Falls. Keough summarized, “The team is a very good economic backbone for the city.”

The Great Falls fans are exemplary. “We have the best fans in minor league baseball,” said Keough. He also noted the support of the sponsors and active involvement of their booster club. He pointed to the unique feature that Great Falls is a community-owned team.

Billings’ general manager Gary Roller commented, “While it is difficult to actually quantify the role we play in Billings, it’s easy to imagine the significance of the void that would be left in the community if the Mustangs were ever to leave.” Roller added that teams like Billings’ contribute to the overall quality of life for its citizens and families — typified by the opening of the new stadium, Dehler Park, in July 2008.

Paul Fetz, Helena’s general manager, emphasized that one role is to familiarize the people of Helena with its working relationship with their Major League affiliate, the Milwaukee Brewers. For instance, Fetz said that most Montanans think that Helena picks and pays the players. That is handled by Milwaukee.

Missoula’s executive vice president, Matt Ellis said, “We care about our fans and community first. Winning and losing are secondary.” He continued, “We take seriously our role regarding the impact of the quality of life in our community.” One recent example is Missoula’s awarding $100,000 in prizes to 3,500 kids who participated in reading programs through the local school systems. Missoula’s mascot, an Osprey, lives in the ballpark. Ellis said it is the only sports mascot living in its natural habitat.

Montana should be proud of its baseball heritage. For a state with less than 1 million people to have four pro baseball teams speaks volumes about the importance and presence of baseball in the state, Keough mused. Roller emphasized that Billings has long carried the moniker of “baseball town.” This is due in part to Billings’ long history of American Legion baseball and the contributions of the Mustangs.
Echoing Roller, I hope none of the four towns in Montana will have to experience the void that would exist should one of those teams leave.
ANNOUNCER: Voyagers’ pitching coach Curt Hasler out to the mound to talk with Husdon as the game has reached a critical point here in the bottom of the eighth, tied 2-2 with one out and Helena has runners at first and second with their clean- up hitter due up …

I WILL TELL YOU about four players on Great Falls’ team from the 2008 summer: Tyler Kuhn, Dexter Carter, Daniel Hudson and Kyle Shelton.

Their memories of Great Falls are consistent. Kuhn said, “I was very unsure of what to expect in Great Falls, but honestly, from the second I walked in the clubhouse I knew it was a good place.” Carter stated, “Great Falls was the summer of a lifetime for me.” Hudson said, “Once I got there and met Crony, my host family, and got to know the town and the fans, I knew that it was going to be a great experience for me and a great place to play in my first season.” Shelton mused, “When I first got to Great Falls I looked around and saw the mountains on all sides. I took a deep breath and said, ‘Well, I can’t run anywhere so let’s play.”

By the 2009 season their paths had diverged. Kuhn, Hudson, and Shelton remained in the White Sox organization while Carter was traded to the San Diego Padres. Hudson’s trek has drawn the most attention as he transcended from the South Atlantic League all the way to the Major League Chicago White Sox. It is difficult to state with precision where these four young men might play during the 2010 season but their pro baseball paths all began in Big Sky country.

Great Falls field manager Chris Cron appeared in 12 Major League baseball games. The cynic might say, “That’s not many games.” The realist says, “That’s an achievement few of us can claim.” Chris would always leave me a copy of his starting line-up on his desk. In his final interview with me in Casper, Wyoming, Cron said he did not take his job for granted and that he was a baseball lifer. There was something about the way he said baseball lifer that solidifies Chris’ understanding of himself and his life work.

These four players verified Cron’s influence in their development. Kuhn said, “Playing for Crony was the best thing that could have happened to me. As a former infielder he was able to help me improve in the area I needed to work most.” Carter commented, “Chris Cron had a huge impact on my life with baseball with the way he made me look at it a different way.” Hudson stated that once he met Cron he knew it was going to be a great experience. Shelton added, “He taught me more about the game I hadn’t seen yet. Chris has a great baseball mind and for him to open my eyes was awesome.”

Cron noted that Kuhn has one of the most unique hitting approaches he had encountered. He stated that Carter was extremely athletic and that his joy in playing rubbed off on teammates. Chris commented that Hudson’s mental makeup separates him from other players. He referred to Shelton as a true professional. Cron summarized, “It was a pleasure and joy to watch and coach these guys.”

ANNOUNCER: The final tonight, Voyagers win 5-2 and now the Voyagers move on to play the Missoula Osprey’s next week …

IT WAS A UNIQUE SUMMER. I toured the Bighorn Battlefield, plunged into a mountain pool in Glacier National Park, jogged through the University of Montana, and my family toured Yellowstone when I was on a road trip. I purchased a real pair of cowboy boots at Lou Taubert Ranch Outfitters in Casper, Wyoming. We saw Devils Tower and were mesmerized by Mt. Rushmore.

Without hope a vision dies, life becomes tasteless, and motivation is squelched. Since leaving baseball full-time in 2005 I had hoped that I would be given another opportunity to broadcast baseball. That opportunity presented itself in Great Falls and I still drink deeply from that reservoir of hope when I consider the future.

Like players, few announcers reach the Major Leagues. That is not a reason to consider the quest a failure. No, the failure may lie in the fact that they never tried while many realize their successes perhaps lay in small towns like Helena, Great Falls, Billings, Missoula — or Myrtle Beach, S.C.

This summer I hit the road again to broadcast the Normal, Ill., CornBelters, an independent professional baseball team in the Frontier League. It’s just another opportunity to utter that phrase so loved by baseball announcers:

Good evening everybody and welcome to tonight’s game … 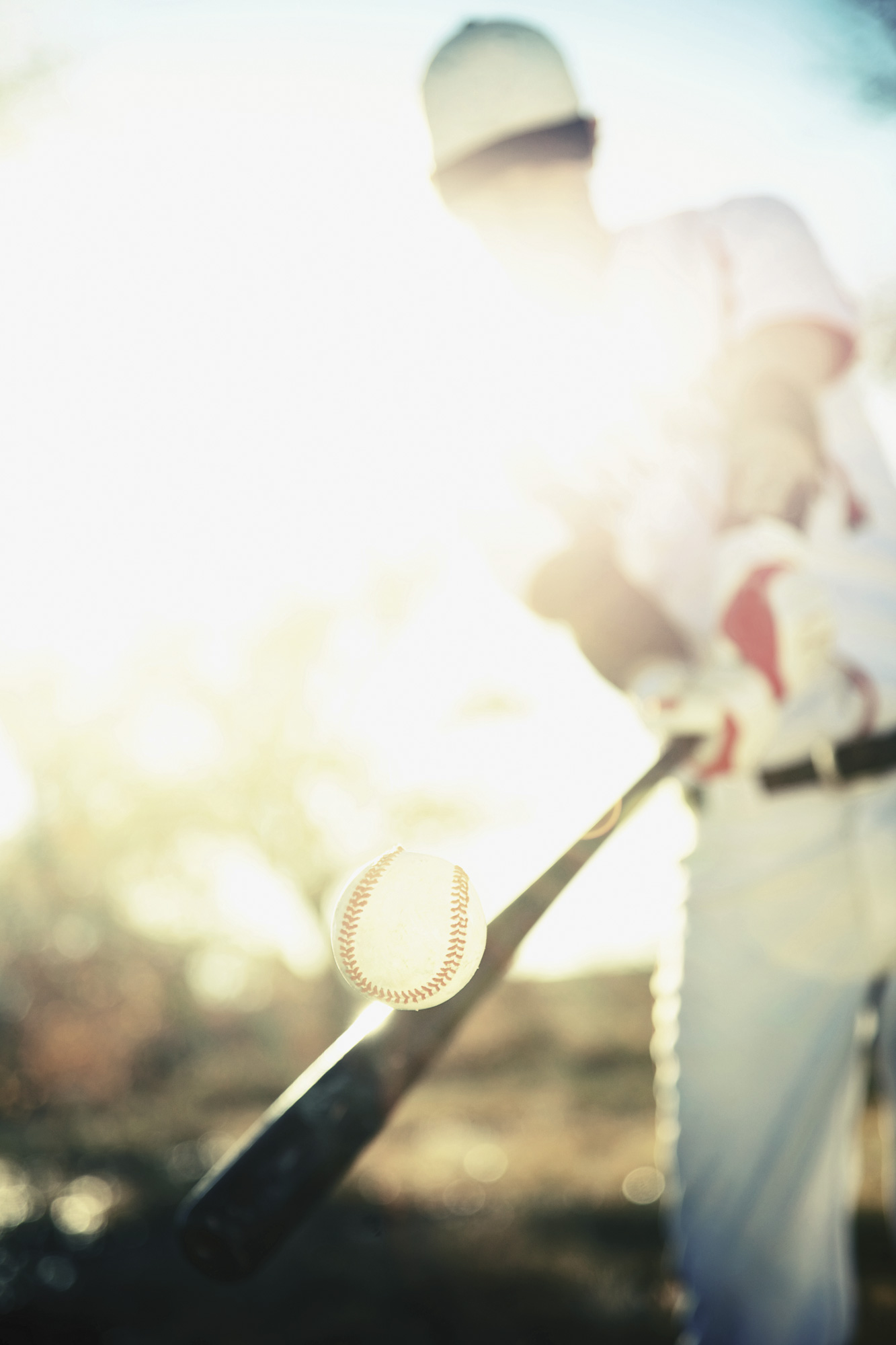 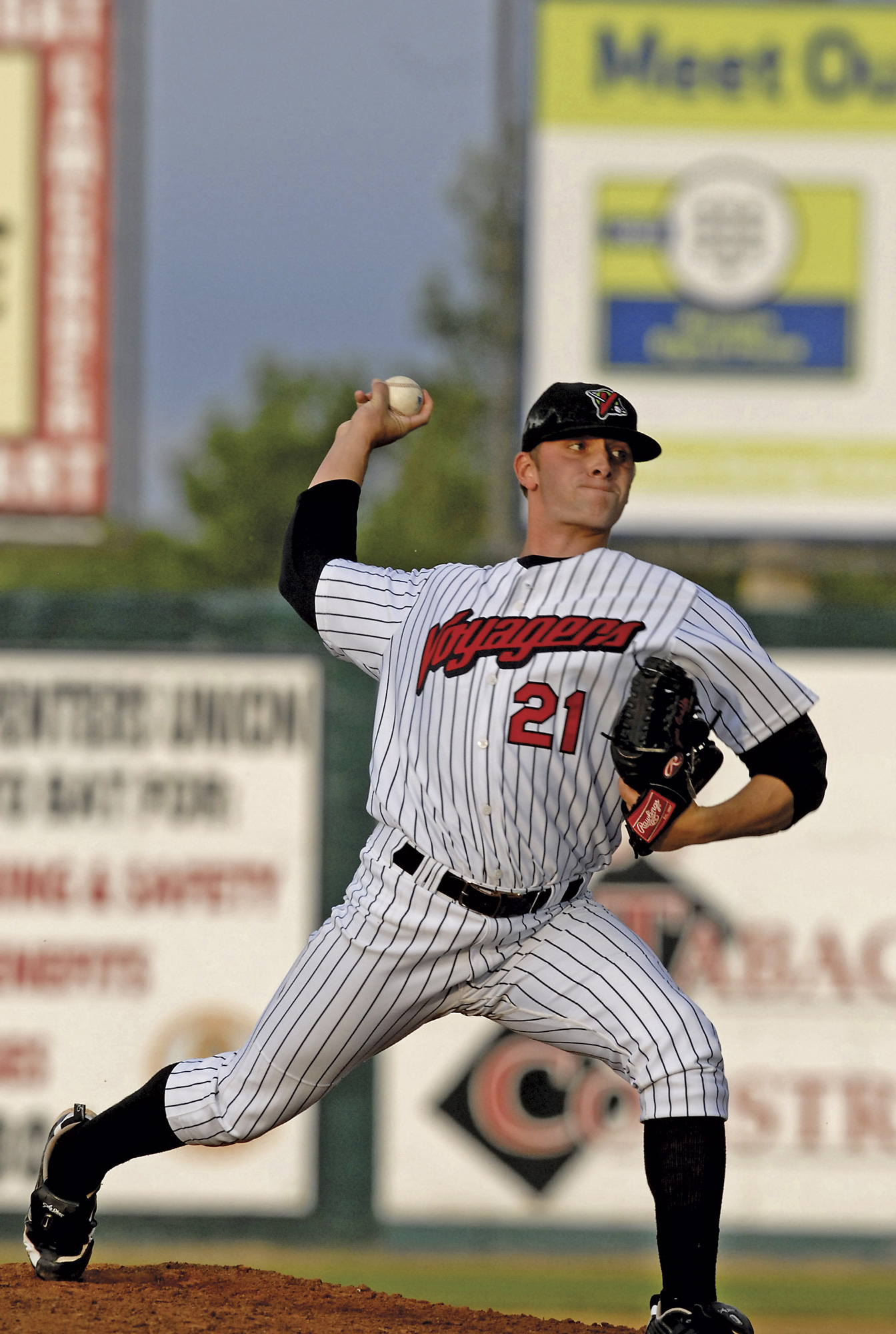 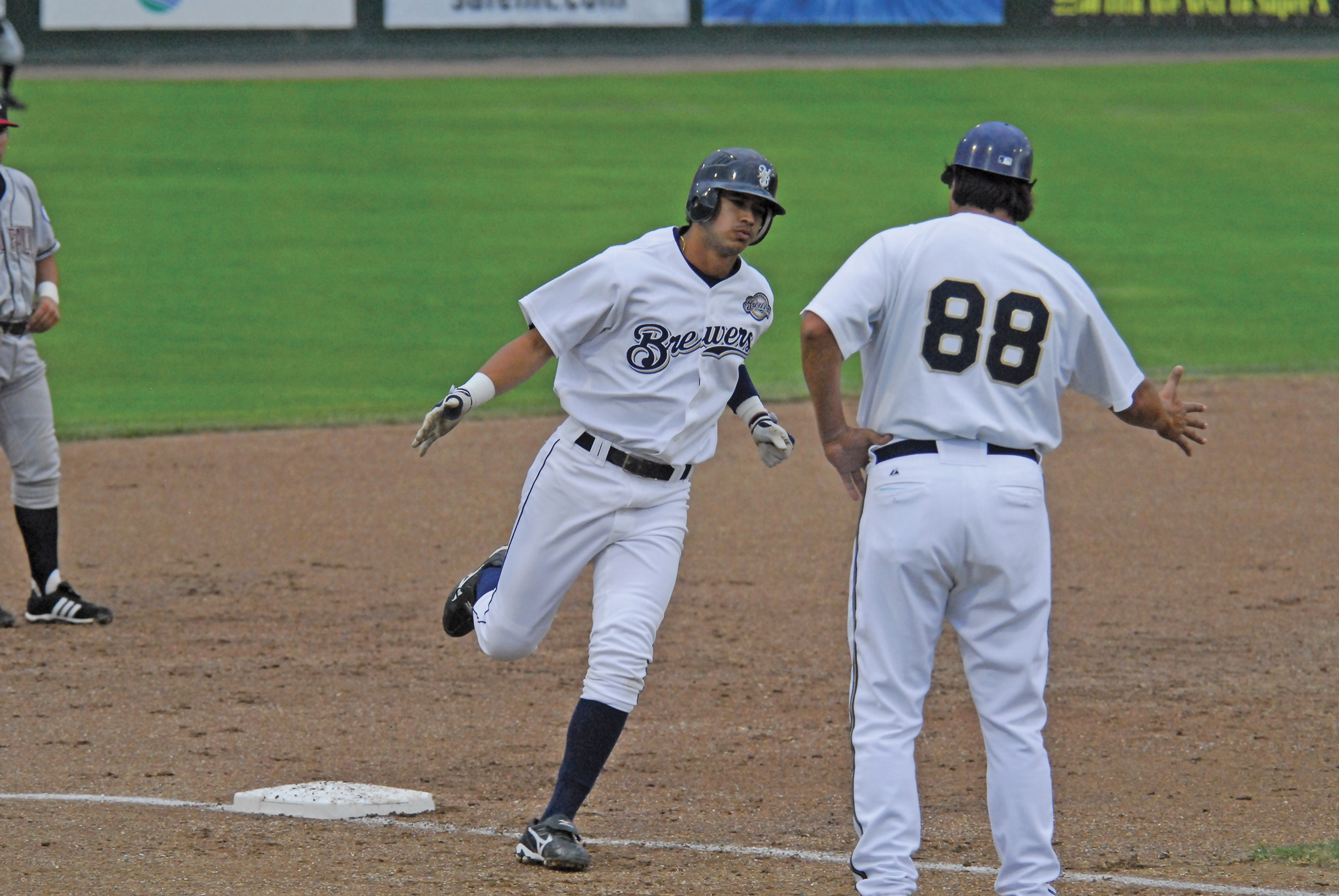 Helena Brewers player, Edgar Trejo rounds the bases. Below: Want to see the only live mascot living in its natural habitat in pro baseball? Then you need to spend a summer’s evening at Missoula’s Ogren Park, Allegiance Field. Photo by Kent Barnes

The four teams play significant roles in their towns by providing family entertainment, contributing to the cities’ economic development, and allowing a glimpse into America’s pastime — baseball. Photo courtesy of Missoula Osprey