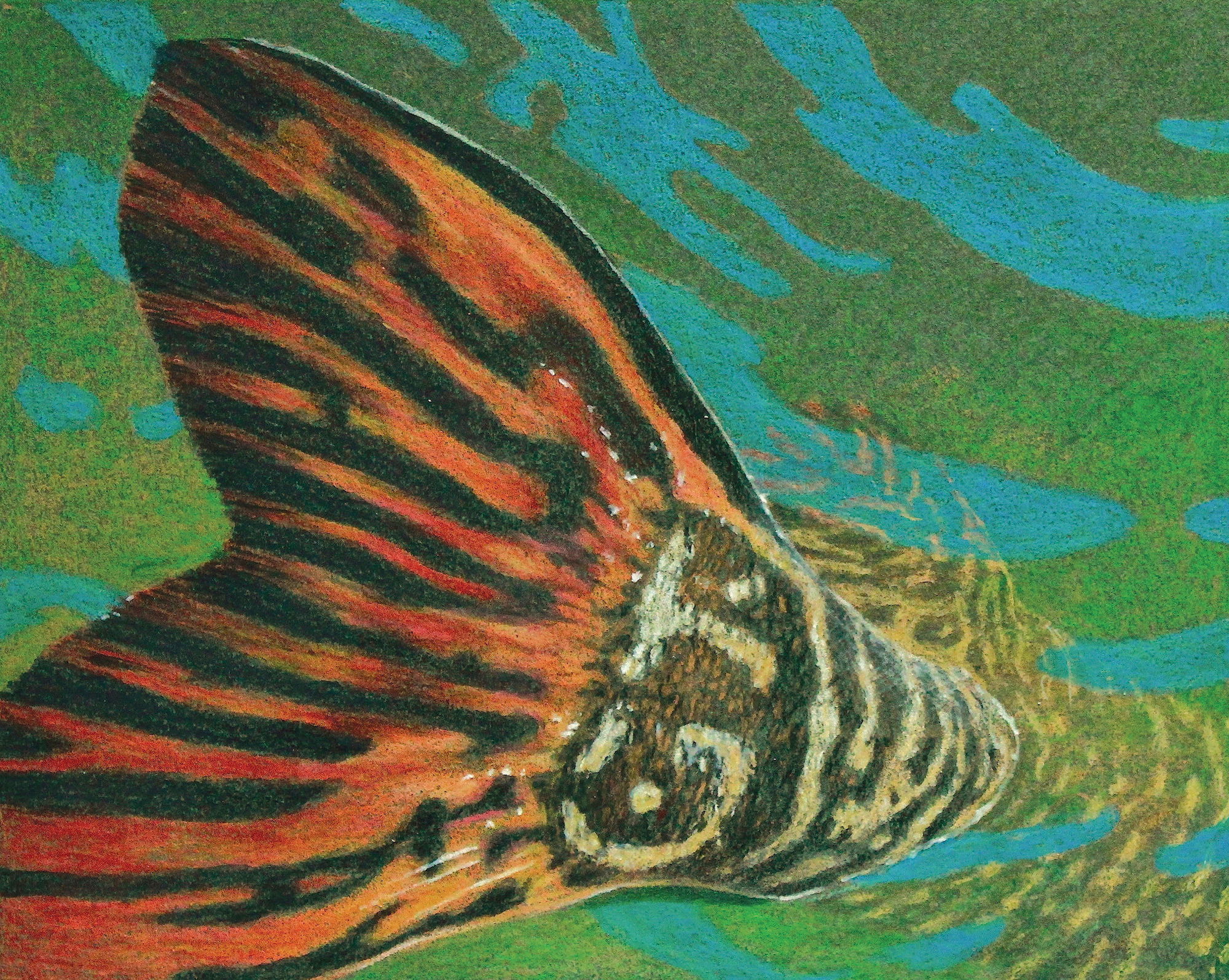 in Summer 2015 | Outside | Written by Greg Thomas | Illustrated by Fred Thomas Posted at 00:20h 0 Comments
Share

Northern pike weren’t supposed to spread through Montana like a swarm of locusts. No one planned on them trying to eat their way through this state’s trout population. In fact, the only place they were supposed to be was in the Saskatchewan River drainage of far northeastern Montana, where they should have been perfectly happy chowing down on a variety of native minnows and bullheads, just like they’d done for thousands of years.

Somewhere along the line, however, these fish claimed additional turf, both on their own and by the hands of eager anglers who wanted to see pike finning in their favorite waters and couldn’t wait for the natural progression. Legal. Illegal. It didn’t matter. Pike found their way into most of the state’s river systems and there’s no doubt they are here to stay.

During the pike’s high-speed migration, trout-lovers lamented their existence. It’s easy to locate newspaper and magazine articles fearing the worst. In one piece, northern pike are called, “the flaming assholes of the aquatic world … with (a) surly underbite and rapacious appetite.” The author goes further, predicting “this pugnacious intruder is laying waste to the trout population of western Montana with such ruthless efficiency, it makes whirling disease look like a paper cut by comparison.”

Five years after that article appeared, trout are still found in western Montana, as well as the rest of the state, and now many fly fishers are acknowledging the northern pike for what it really is — one cool game fish with a very bad attitude.

Pike can be caught in Montana any day of the year, but they are most active and most conducive to being caught on fly gear in the spring and fall. During spring, pike move into shallow, weedy bays to spawn; during fall, they eat everything in sight while trying to put on weight before winter sets in.

Now, I’m not about to call pike the hardest-fighting fish on the planet, but there’s a lot to say about the way they attack a fly that’s popping over the surface or swimming just under it, and there’s nothing like seeing a v-wake homing in on your fly from 15 yards away. When the strike comes, it’s splashy and arresting. Then the cartwheels begin. But what is most remarkable to me is this fish’s personality. They don’t wiggle around like mad, like a trout, when you’re trying to unhook them. They don’t bolt from your hands when you dip them back in the water, as if they’re frightened and just can’t wait to find their happy, dark place. And they rarely turn belly-up as if the 40-second fight they endured was just too much to bear. Instead, they stare. They stare at you as if trying to figure out a way to sink their teeth — an array of chompers that may be an inch long on large fish — right into your jugular. And when released they slowly drift into the depths, still staring, as if thinking, I don’t know how, and I don’t know when, whether in this life or another, but some day, some way, I’m going to hunt you down and get even for what you’ve done to me.

In reality, pike are a little dangerous and anyone who spends much time fishing for them has the battle scars to prove it. Those teeth are nothing to fool around with, and these fish aren’t the most accommodating when you’re trying to extract flies from their mouths. Instead of opening wide, these guys slam their teeth together and lock their jaws, like a sad and angry boy who refuses to spit a piece of candy into his mother’s hand. To get at a hook anglers use “spreaders,” a tool that is worked between the lips and into the mouth at which point it springs open, forcing the fish to say “cheese.” With the mouth forced open, anglers can reach a hook with needle-nosed pliers.

Pike are way more willing to open their mouths when something swims in front of them, and they’ll eat just about anything. Items reported to have been found in the bellies of northern pike include a whole, 1 pound, unwrapped summer sausage; whole mice and voles; 6-inch long leopard frogs; a whole rattlesnake; a 12-inch long yellow perch; small northern pike; rabbits; ducklings; and a pack of unopened Camel cigarettes.

In order to eat items of that size, pike must grow to large size. The world record is a 55-pound beast caught in 1986 in West Germany. Montana’s record pike is a 37.5-pounder taken from the Tongue River Reservoir in 1972. Given the proliferation of pike during the past four decades, I think that’s a record that’s ripe for the taking. But where would one venture to do so?

The answer: almost anywhere. Northern pike are abundant in western Montana’s Flathead River system; they are spread throughout the lower and middle Clark Fork drainages; they are now relatively abundant in the lower Bitterroot River; they are common in the Missouri River watershed; and they are even penetrating the Yellowstone system, most noted by the recent surprise landing of a 38-inch, 16-pound northern at Crow Beach, which is one of the best and most heavily-fished pools on the trout-rich Bighorn River. Even Frenchtown Pond, a little interstate-side puddle west of Missoula, kicked out an 18-pounder years ago. There’s no doubt pike have pioneered waters that haven’t been tested by anglers specifically seeking them. So the next record pike may be wherever you find it. And it might arrive as a surprise.

I’ve caught pike on the Flathead River, in Salmon Lake and Pishkun Reservoir, but my favorite pike haunts are farther north, in Manitoba and the Yukon Territory. That’s because fishing there offers a legitimate shot at the Holy Grail — a 50-plus-inch fish.

Fish of that size are not abundant, even in the best pike waters on the planet. I don’t think I’ve even seen a fish that size. But I have hooked 40-plus-inch pike and they seem plenty large, somewhat threatening, big enough to think that something the size of a dachshund would be taking a risk if it placed one paw in the water. One of these Yukon fish showed up when a friend of mine had hooked a smaller pike, maybe a 25- to 30-incher, and was quickly reeling it in. Before it reached the boat another pike — this one a giant — shot out of the depths and latched onto the middle of the smaller pike, its mouth covering the width of the smaller fish’s body. My friend kept reeling and the big pike just held on for a free ride to the side of the boat, where it finally let go. As my friend worked the hook out of the smaller pike’s mouth I said, “I’m going to catch that big one.” I made a cast, stripped my fly, and the big pike swirled on it, just missing. As I lifted to cast again my friend smashed his fly right in front of the fish, who took it.

I shouted, “You stole my fish!” as he fought the beast with a smile. We piled out of our boat and onto shore to land the monster. As my friend held his prize, I stretched a tape measure from nose to tail and it registered 44 inches. Like most pike, this one was a beautiful combination of pale olive and brown on the back, with reddish fins and a reddish, forked tail, its sides splashed in mellow-yellow coloration. Throughout, this fish was mottled with white streaks and dots, probably a camouflage feature to represent light streaking through the weedy areas where these fish prefer to hunt. The fins and tail offered strange whitish oval patterns and straight lines.

Just as my friend was releasing the fish, the pike’s knuckle still in his hand, the rest of the body wiggling for freedom, that death-scowl on the fish’s face, I pointed at a pair of patterns side-by-side on the tail that clearly spelled out “GT.” “See! See! You stole my fish,” I said. “It really did have my name on it.”

In the typical, frank style anglers prefer, my friend said, “Quit ye’ whining. There are lots more. We’ll find another.”

These days, for better or worse, there are plenty of pike in Montana, and plenty of opportunity to catch them.