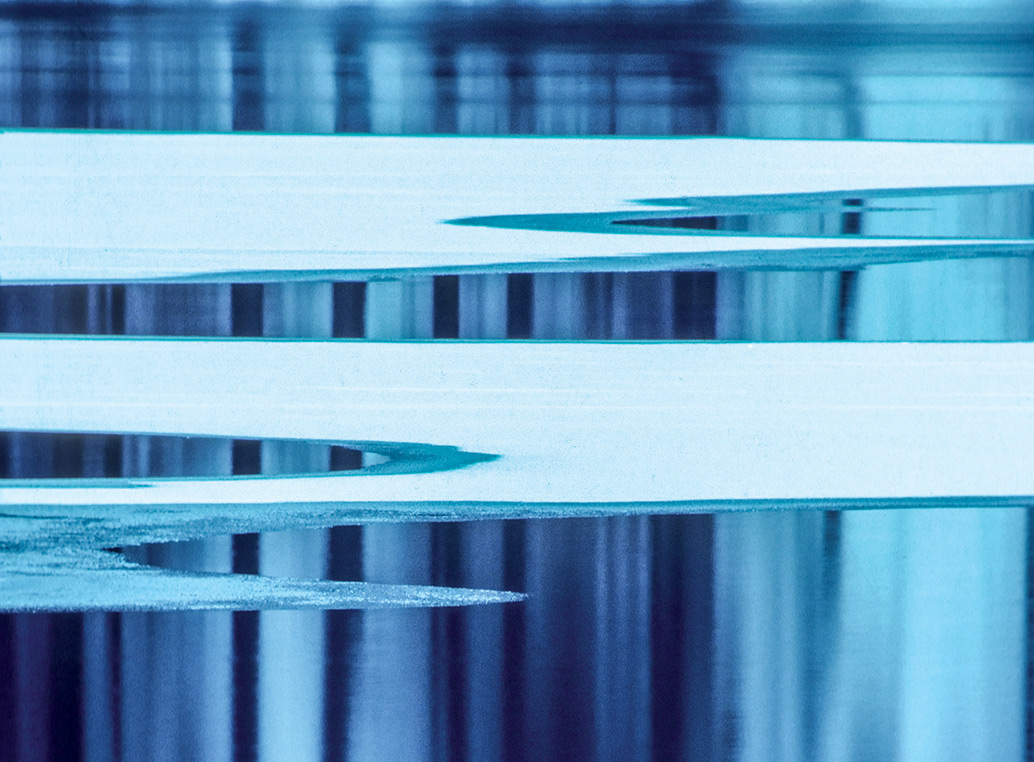 The images float before the viewer’s eyes, strange and otherworldly — like photos of the Crab Nebula from Hubble, or mixings from a hippie light show. They might be satellite shots of the Mojave, cell-section studies from an electron microscope, or hallucinatory paintings from a would-be Jackson Pollock. In fact, they are nature photographs made by Tom Murphy, taken largely in Yellowstone National Park and often of objects measuring no more than 10 inches square. A skim of ice formed on the surface of a small pool of water along the edge of the Gallatin River. During the night, the level of the river fell and left the ice suspended.

Murphy sits not by his “silly blue tarp,” beneath which he was photographed snow camping in the PBS film “Christmas in Yellowstone,” but before his computer in a warm studio on a crisp December day. He is the author of seven books of photographs, a contributor to National Geographic and The New York Times, the director and subject of several films, an acknowledged expert on Yellowstone’s backcountry, and a man who has skied across that park three times, including “once solo, which is crazy,” in 1985, and with companions more than two decades later at 66. Today his shoes are off and his socked feet are crossed as he sifts through abstracts.

These are not the wildlife shots of foxes, bison, and bears that have made his reputation, but dreamier fare. An image pops up of white circles on a gray and tan background, with white striations. It might be a canvas by the painter Robert Motherwell. In fact it’s a miniature taken on Yellowstone Park’s Blacktail Plateau.

Murphy jabs at the screen. “In the daytime you get melt, and these little pools of water. Then at night it freezes the surface of this pond or puddle and the water soaks into the ground and leaves these bubbles. You’re looking at maybe 4 inches here. It’s a simple story; it’s a pane of ice over some mud.”

Another shot is more conventionally beautiful. The screen fills with an image that appears to be of some exotic fabric. “It’s hoarfrost and lichen,” Murphy says. “Hoarfrost builds into the wind. But when it grows it forms these feathers. These little crystals are probably about half an inch to three-quarters of an inch long. And they are moving, fluttering. So the movement caught my attention.” Spring snowmelt on the Blacktail Plateau in Yellowstone Park created shallow pools of water. The surface froze overnight even while some of the water drained away, leaving panes of ice suspended. The circles formed as bubbles rose out of the soil to be captured under the ice.

A third photo — of an undulating field of white — suggests the curves of a reclining woman. “But they’re snow pillows. They could be 30 inches tall or 30 feet tall. It turns out they’re about 10 feet tall.”

Asked to define the parameters of an abstract, Murphy says, “It has to be sort of unrecognizable. You don’t have to know what it is, but you have to be intrigued. Good composition involves textures and shapes, and how the eye moves through an image. It’s not just snow, it’s how does the snow lie there? … What’s the bigger and broader story?”

The story of Murphy’s life seems juxtaposed to the abstract footage of these stills. Raised on a cattle ranch in “the dry, prairie landscape of Western South Dakota,” and with six siblings, he nevertheless grew up “a loner.” He and his wife Bonnie moved to Livingston in 1978 “with $300 between us.” Murphy drove a school bus and dug postholes while Bonnie clerked at the Yellowstone Motor Inn. “The reason I wanted to move to Livingston was because of Yellowstone Park,” he says.

He taught himself photography (and has instructed others “from all over the world” since 1985), studied anthropology at Montana State University, and backpacked in the park. “I’d already fallen in love with the place,” he says. Murphy worked a variety of jobs. “I can do all kinds of things — I can overhaul engines, I can help build houses. I’m a practical guy capable of doing what people consider macho things.” Yet he possesses a dreamy side that verges on the mystical.

“I like to have a mystical experience every day,” he admits. “I’m not embarrassed about that.” What such an experience promises, Murphy says, is “a surprise — a new realization. It’s not hallucinating, it doesn’t come from drugs or pain or starvation. It’s just going and sitting on a hillside and calming down. Just watching is a meditation for me. There’s stuff going on all the time.” During his 14-day, solo ski trip across Yellowstone in 1985, he endured minus-30-degree temperatures and a grueling trek. “You suffer. It’s not fun. I don’t do a ski trip because I like to ski. I do it because I want to see the country.”

The payoffs, in terms of contemplation, were extraordinary. “I had so much solitude that all human sound went away. I could hear my heart beating for most of that trip. That was probably the most amazing part … clearing out my head so that I was really there — truly part of this place.”

Oddly, his abstracts are reminiscent of the closeup photography Zen philosopher Alan Watts included in his 1962 book, The Joyous Cosmology, about experimentations with LSD. Murphy has never used psychedelics, yet he’s been accused of teaching photography “like Zen — if it looks good, it is good. I don’t care how you did it; if you can get people to look at your photographs and want to walk around and learn something, that’s a successful image.”

Though he has traveled the most remote corners of Yellowstone, it’s not just its distant reaches that attract him. He clicks on an image of trees burdened by hoarfrost, taken near Mammoth Hot Springs. “I was always intrigued by Mammoth because of its amazing array of abstracts. It’s winter in this, and conditions are changing constantly. The steam is moving around so fast — bam, bam, bam. As it moves through these trees, the shadows come through, the light comes through. Steam swirls from below and through the branches. It’s kind of frantic. I see it, bam, and it’s over.” He sits back. “Some of this stuff is not contemplative. I’m just being overwhelmed. It’s a matter of trying to stop the world for a second.” Icicles up to 30 feet long formed on the walls of Icebox Canyon along Soda Butte Creek in the northeast corner of Yellowstone Park.

“Beauty” is not a word Murphy is hesitant to use, nor is “awe.”

“I don’t know how you define what’s beautiful,” he says. “But there is a universality to what people recognize as beautiful. I think it comes down to somehow reaching people’s sense of awe. It’s having people say, ‘Oh, that’s interesting.’ A cancer cell beneath a microscope, you can say, is scary … but on the other hand, it’s part of the universe. And all the universe is beautiful on some level.”

Murphy considers beauty, and the art that captures it, as useful conservation tools. “It’s making people care. William Henry Jackson and Thomas Moran, at the very beginning of Yellowstone, helped convince Congress to make it a park because of the beauty they brought back. Ansel Adams and other photographers and artists have made a big difference, because a lot of the best art comes from nature.”

There is the question of whether his backcountry mysticism derives from experience — he has skied some 2,000 miles in the park, hiked perhaps 5,000 — or religiosity. A striking moment in “Christmas in Yellowstone” is when Murphy, dusted by snow and standing before stark lodgepoles, looks around and says, “It’s my church, my cathedral.” Murphy photographed Yellowstone’s Grand Prismatic Spring from the air, emphasizing the transition from boiling blue water to the growths of colorful cyanobacteria around the edges.

“I think my definition of God is whatever life is,” he says. “The force of life. Everything, I believe, has an equal right to live as me. And I try to give them beauty and truth, and therefore value, by demonstrating that they do deserve to live and they are beautiful. I believe in the value of other creatures. I believe that everything has an equal right to live. And is equally beautiful.” He turns from his monitor. “The basis of my approach to the world is that it’s a beautiful place, full of all kinds of amazing, wonderful life. And it’s a good place to be.” Spindrift blew off the lip of a snowdrift in Yellowstone’s Hayden Valley. On a morning when temperatures hovered around 20 degrees below zero, the steam rose into pine trees close to Palette Spring near Mammoth Hot Springs Feathery hoarfrost accumulated on the upwind edges of rocks along the overflow channel from Yellowstone’s Sawmill Geyser.