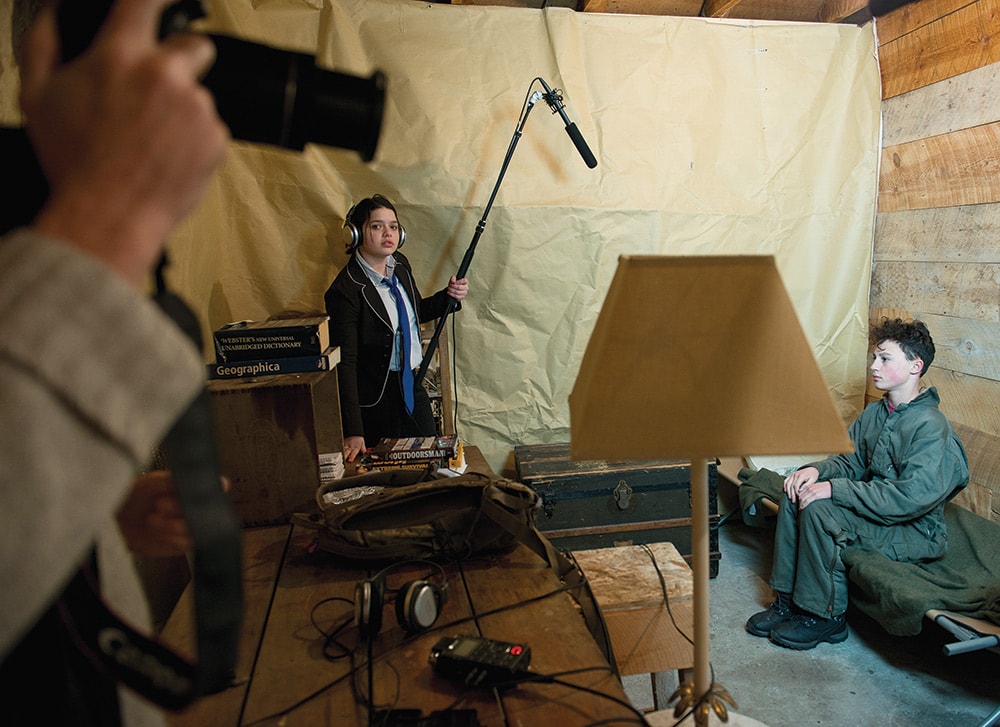 “Isn’t this just the best place in the world?” Peter Rosten waved a hand across the landscape around us, a rich green pasture in the Bitterroot Valley, thick with grass. Two hundred yards from where we walked along the gravel road, a huge log cabin sat in tranquil repose at the foot of a beautiful, pine-covered mountain.

Rosten, who founded one of most successful and influential after-school programs in the country, pointed at the structure, which was about a half mile up the road from his own small cabin. “I wanted to buy that monstrosity a few years ago, but I’m glad I didn’t,” he said. “The one we ended up with is just right.”

About five miles outside of the tiny town of Darby, Montana, a slinky dirt road led to the comfortable log cabin that Rosten called home for almost 30 years. The cabin featured a black-hooded, Darth Vader-ish wood stove, a yellow lab named Daisy, and lots of art — especially metal sculptures populating the fenced-in yard.

Thirty years ago, Rosten was living what he once considered his lifelong dream. Born in Brooklyn, New York, he grew up idolizing his father, who produced documentary films. When they moved to Los Angeles during his youth, he got the movie bug himself, and when he wasn’t busy indulging in the ’60s and ’70s hippie lifestyle, he carved out a successful career in film. His first production came about by accident when he picked up a hitchhiker who invited him to come inside and smoke some weed once they got to his house. Rosten spotted a series of books on the young man’s shelf called The History of Blacks in America. After leafing through some of the volumes, he became obsessed with the idea of making a film that featured some of the African-Americans named in this collection, many of whom were not familiar to him. The film, called “The Greatest Story Never Told,” won a local Emmy Award, and it launched Rosten into a solid career producing for both television and film.

Looking back on the period that followed, he said that he began to feel as if he was “drinking poison, as if he was acting “a pimp for other people’s agendas,” never feeling as if he had the opportunity to make the movies he wanted to make.

So when one of Rosten’s best Hollywood friends, screenwriter Jim Kouf (“Rush Hour” and “National Treasure”), offered him a good deal on a cabin in Montana, Rosten took him up on the offer. His marriage was coming to an end, so the chance to get away to a cabin in the woods was attractive.

The irony of this story is that at about the same time that he was suffering this crisis of convictions, Rosten served as executive producer for his most successful film, “True Believer,” starring James Woods and a young Robert Downey, Jr.

There are some interesting parallels between the plot of “True Believer” and Rosten’s own story. The film is about an idealistic young lawyer, played by Downey, who was thrilled to land a job working for Eddie Dodd (Woods), a lawyer who had built a legendary reputation taking on cases that most people would consider lost causes. Cases that mattered.

But when Roger Baron (Downey’s character) showed up at Dodd’s law office, he discovers a man who has given up on the ideals that once drove him. Dodd was smoking pot in his office, just barely making a living defending drug dealers who he knows are guilty. The fight was gone, and Baron found himself disgusted with Dodd.

By Rosten’s own admission, he had also given up on his dreams by the time he moved to Montana, and was ready to spend the rest of his days forgetting about the craft that meant everything to him in his youth. He took a job working as a ranch hand for Kouf, who raised cattle when he wasn’t writing screenplays. But a few years after he moved to Montana, Rosten met his own version of Roger Baron in a woman named Susan Latimer. Latimer and Rosten’s stories could not be more different. Rosten was raised Jewish, a city kid, while Latimer was the child of a polygamist Mormon father, growing up in a small town near Fort Benton, Montana. Her mother eventually left that marriage, and Latimer developed her own way of looking at the world, but much of her beliefs were deeply rooted in that background of farming and religion. She is a strong believer in helping others, and leaving a positive footprint in the world.

When she and Rosten married, she encouraged him to use his talents and experience in a way that would endear him to his neighbors in small town Montana. Rosten was open to the suggestion, and he started by approaching the superintendent of schools in Corvallis, asking whether he could teach an after-school class in film production at the local high school. The superintendent admitted later that he was more than a little nervous about the idea, but he ended up agreeing, with two conditions. First, Rosten had to provide his own equipment, and second, he wouldn’t get paid.

Rosten agreed to these conditions, put up $10,000 of his own money, and managed to dig up some equipment from donations. Ten years later, the results from that humble beginning have been nothing short of remarkable.

I found Rosten to be a fascinating role model, clearly adored by his students. He was small in stature but not in presence or personality. When I met him the first time, he had a ponytail, much like Woods in “True Believer,” but he had since cut his hair short, and wore glasses that would fit right in with the current Hollywood crowd.

Rosten claimed that he had no idea what he was doing when he started teaching, but this was apparently not true, as interest among the students in Corvallis grew quickly. The next year he offered two classes, and the growth of the Media Arts in Public Schools (MAPS) program has been steady ever since. MAPS now offers five different classes in film, design, music, technology, and entrepreneurship, and the program has three full-time instructors. As of 2013, MAPS classrooms and production studios are housed in their own building in Hamilton, the seat of Ravalli County. The program serves five towns in the county.

The program has generated its own income nearly from the beginning. It started with a public service announcement, and much of the work that MAPS has done since then has involved community service. But the success of the program has also attracted the attention of many local businesses and organizations. From the second year on, local organizations that heard about the MAPS program hired Rosten and his students to produce commercials and other projects.

I asked Rosten the secret to their success, and he quoted something his own father told him about his career as a film producer. “If you hire the best people and give them the support they need to do their jobs, it’s easy.”

Two recent film projects that were produced by MAPS were both awarded Student Emmy Awards, so despite stepping back from his own involvement (a choice made partly because of his battle with cancer), Rosten’s team has been able to maintain a high standard of quality. Other recognitions included being named one of the top 50 after-school programs in the country by the president’s Committee on Arts and Humanities, and Rosten was named the newest member of the Montana Ambassadors. Just a few days after his death, Susan and Clare Ann Harff (who took over as director of MAPS in 2016), were informed that Rosten was going to be awarded the Outreach Montana Ambassador of the Year. This past year, Rosten was also honored as the Bitterroot Business Person of the Year by the Bitterroot Chamber of Commerce. And finally, on June 3, 2016, Rosten was inducted into the National Academy of Television Arts and Sciences Northwest Chapter’s Silver Circle. This recognition is awarded to media professionals who began their careers in television at least 25 years ago.

MAPS has provided services for more than 1,000 students; among all of those students, fewer than 10 failed to graduate from high school. The program boasts a reduction in student dropout rates, as well as increases in GPAs, credits attained, and in graduates going to college. All at no cost to the students themselves.

I happened to be at MAPS on the last day of school, and there were many hugs, many tears. Rosten inspired great affection from these kids, but they weren’t intimidated by him. They had no problem teasing him. He was a fascinating blend of gentleness and confidence.

Rosten had been battling bone marrow cancer for eight years when I met him, a fact that he shared with me without the slightest hint of self-pity or doom and gloom, although it took his life just months later. But it hadn’t killed his spirit.

It occurred to me that the common element between Rosten and his best movie was passion. I saw it in the way that he and Susan talked about everything that was going on in their lives, whether related to MAPS or not. They were passionate about good books, about food, about their family. Susan came into the marriage with four children, and Rosten adopted them and treated them as his own. The day I visited the MAPS building, some of the staff gestured me toward the production room, away from Rosten, where I watched a video performed and produced by their students to honor Rosten’s accomplishments. It was called “Everybody Needs Love,” and by the time the video was over, there was not a dry eye in the production studio.

Rosten had received a generous contribution that day as well, so that evening, we celebrated what had been a very good day by going to the best (well OK, the only) sushi restaurant in Hamilton, where Rosten’s take-charge attitude was on full display. He ordered for all of us, and when the order came, the table was filled completely with food. I took one look at the array of dishes and thought there was no possible way we could eat it all. Then he ordered some more. And an hour later, every platter was picked clean. To me, it was just one more example of how Rosten’s lust for life was contagious.