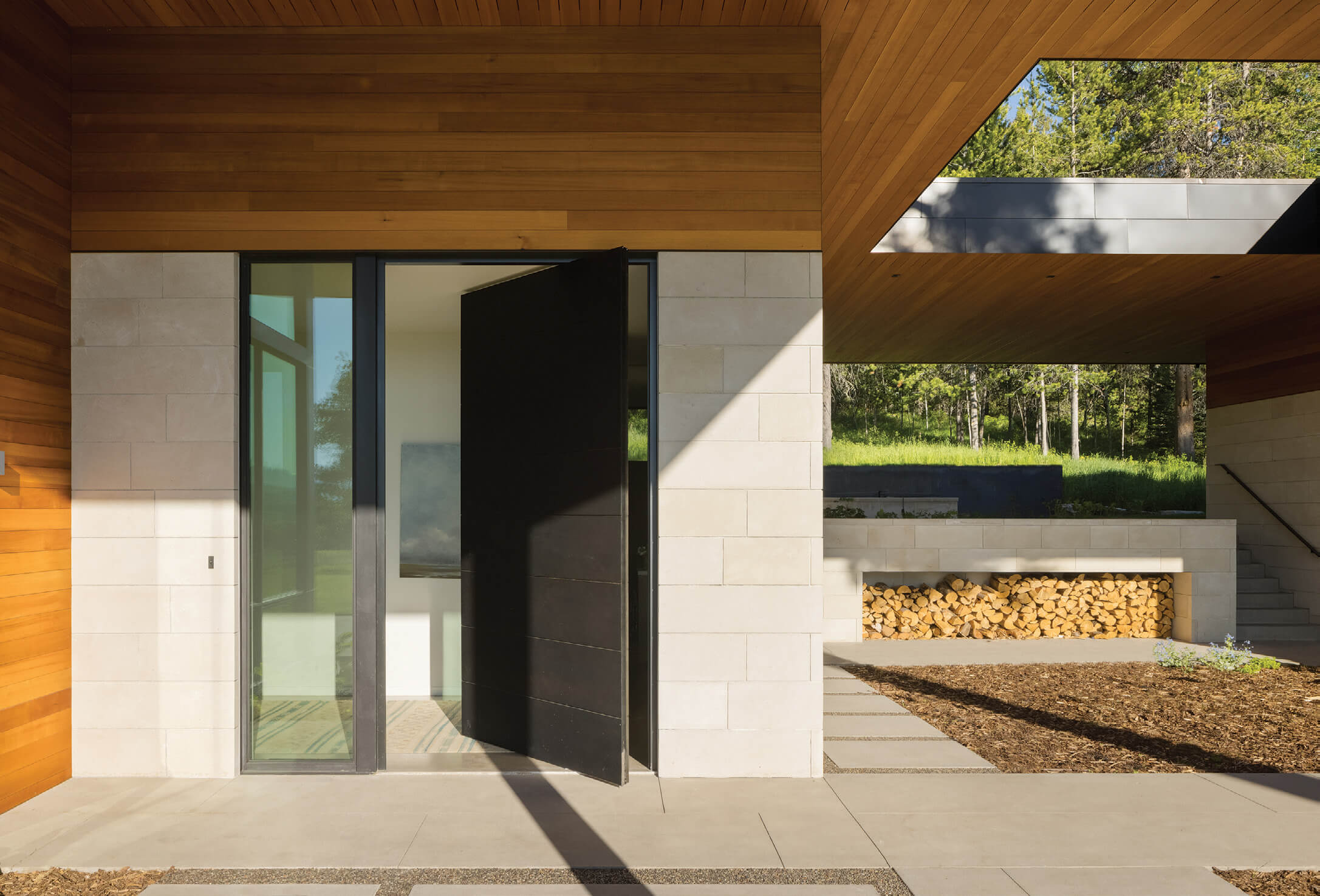 The Overlook Residence’s blackened steel-clad pivot entry door with an integral pull makes a statement about how the structure is rooted in its environment.

In art, a small painting that exhibits transformational use of light and shadow, lines, color, and expressive detail is frequently referred to as a gem. In northwest Wyoming, a modest-sized house bracketed by the monumental outlines of the Teton Range has achieved all the elements of an architectural gem. 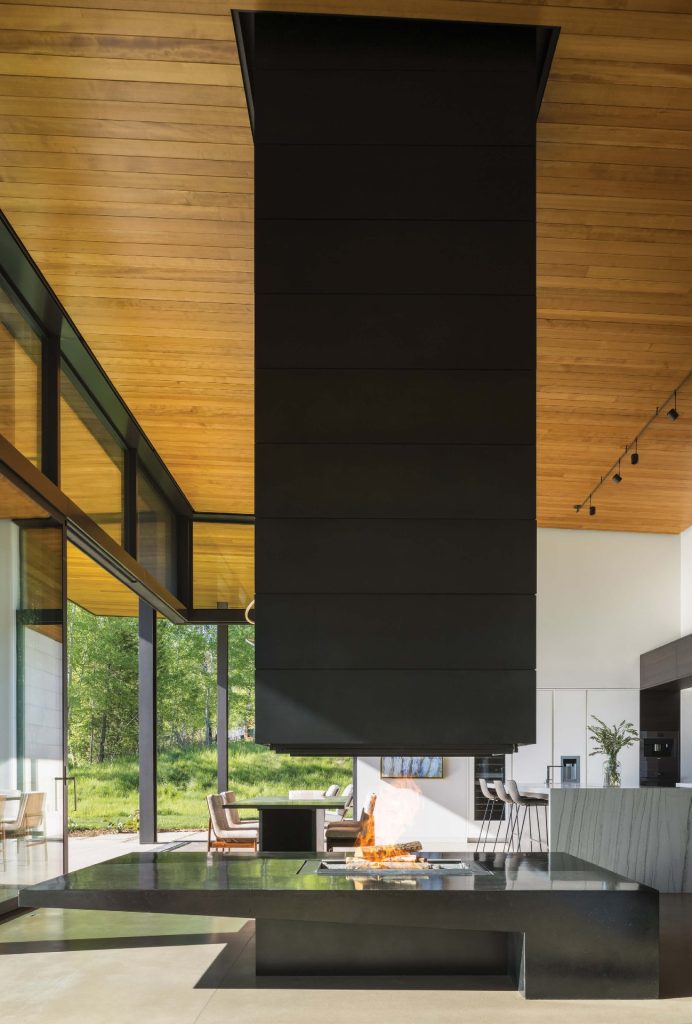 The wood-burning fireplace features blackened steel on a chimney suspended from the ceiling above. The elongated hearth below, made of precast concrete, incorporates wood storage, and the taper visible on the underside mimics the slight slope of the ceiling above.

Known as the Overlook Residence, this home near Jackson Hole was designed by CLB Architects. It’s a gentle adornment to the natural areas that surround it — from meadows to forests, from level to angled — engaging with the landscape in subtle conversation. Composed of just a few materials, it’s a graceful structure whose daylight illumination is matched in spirit by nighttime quietude. 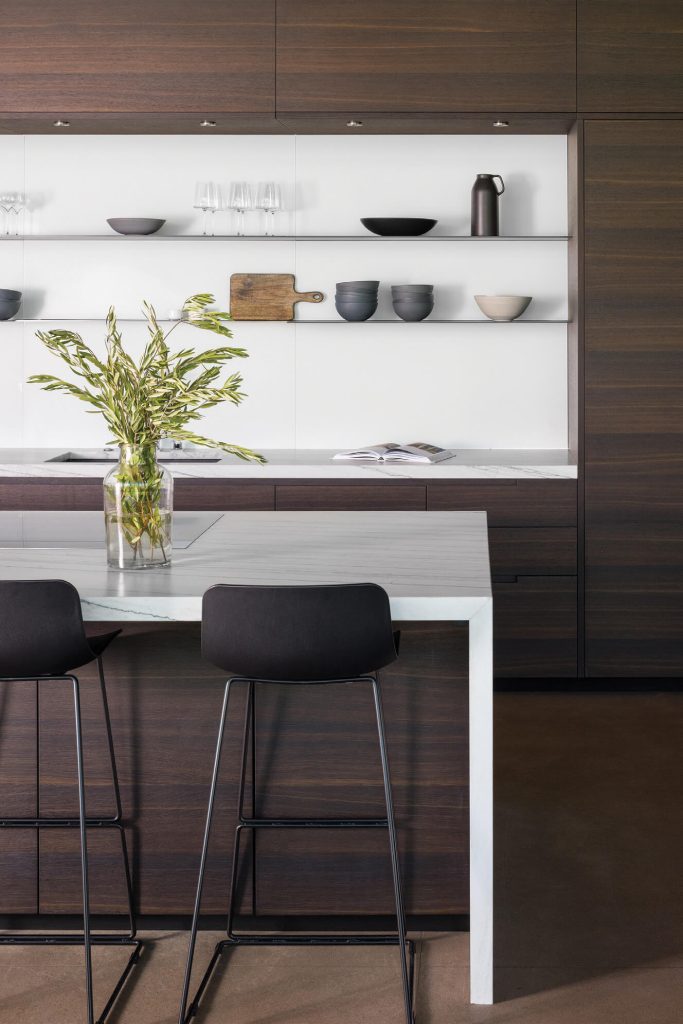 A waterfall countertop in White Macaubas quartzite spills down the north face of the kitchen island. The backsplash behind the cabinets features frosted white glass with thin steel cantilevered shelves.

The three-bedroom house sits on several acres in a slender lot that runs east-west. Kevin Burke, managing principal of CLB Architects and the creative force behind the Overlook Residence, explains that, since the property does not have a view of the Tetons, the design team was at liberty to orient the structure according to its organic advantage. “This was really about nestling the house at that important edge where the meadow meets the forest,” he says. 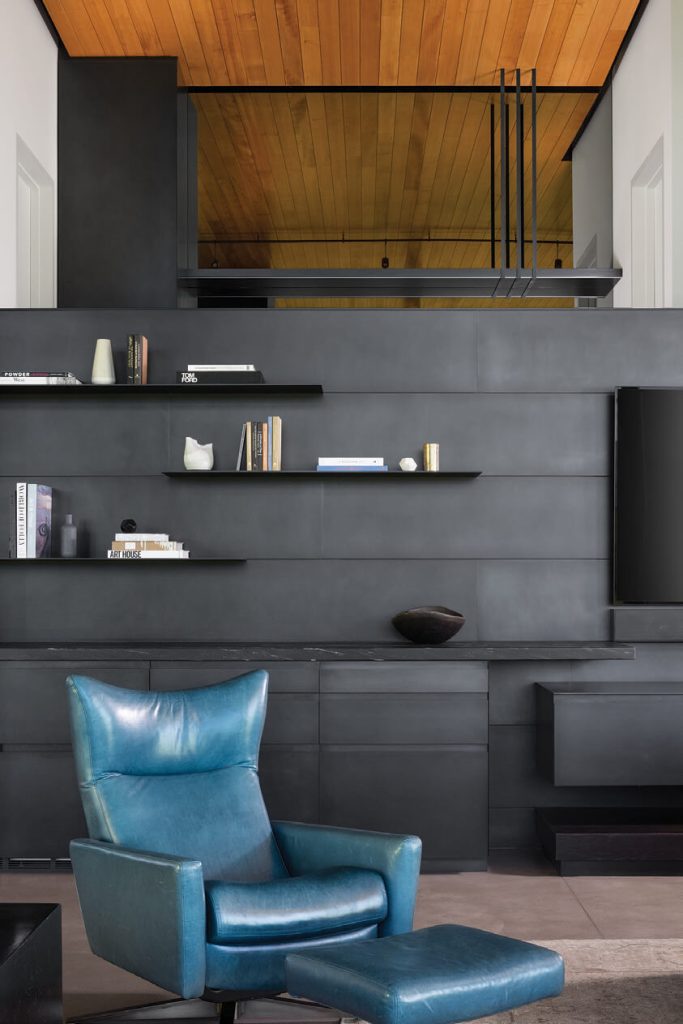 Blackened steel panels and floating shelves decorate the halflevel wall above the main floor. The cabinets are clad in steel with black soapstone countertops to create a single tone statement. 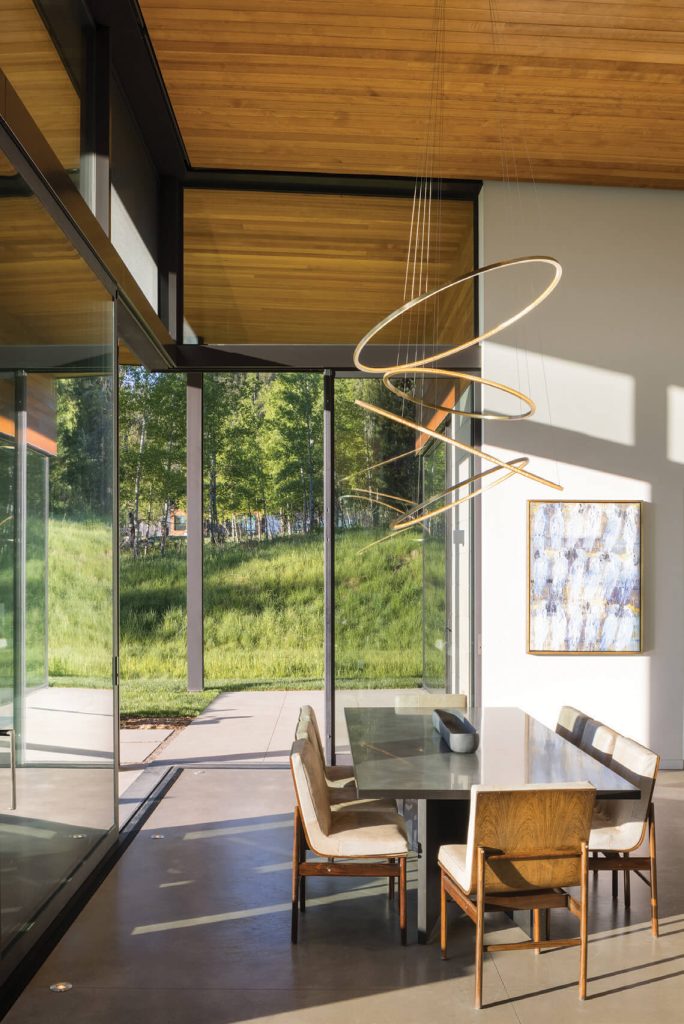 The split-level house nestles into the hillside at the threshold between the treeline and the meadow. The building’s understated material palette and expanse of glazing complement its surroundings, reflecting the vista to the east valley below.

The effect is a house that is sheltered by the forest, but which opens, figuratively and literally, to openness in acknowledgment of its landscape. “It became evident that was where the house really wanted to be,” Burke says of its ultimate positioning. 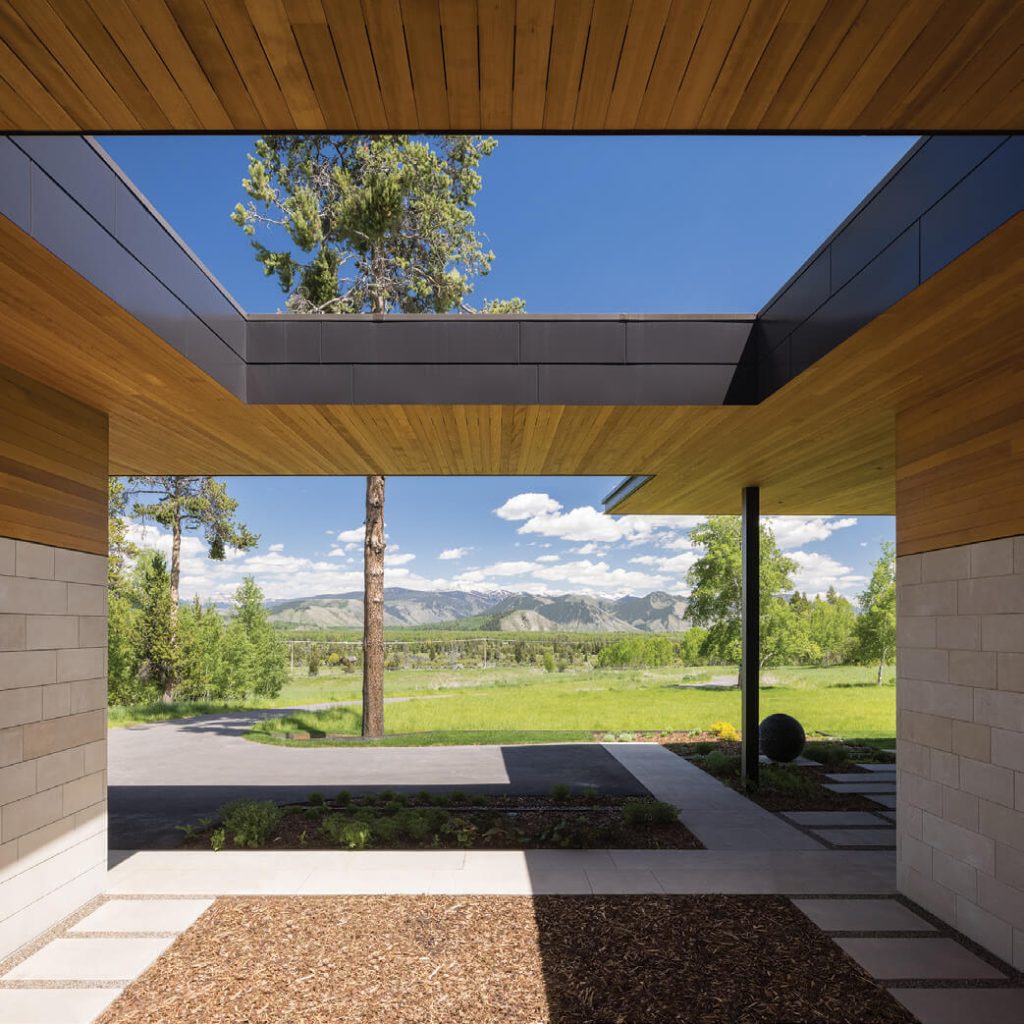 The roof penetration, in a happy marriage of intention and design, spills light onto the garden space below and frames views to the east.

Components of the home are shaped by the centrality of location in the same way that flowing water branches effortlessly into expectant tributaries. The roughly 3,200-square-foot living space is offset by a large garage and storage area (for a total of 4,200 square feet), all of which are fashioned from stone, wood, and blackened steel. The compactness of the structure demanded a certain design restraint, one which Burke says was a welcome gesture in a setting that would otherwise be spoiled by over-ornamentation. 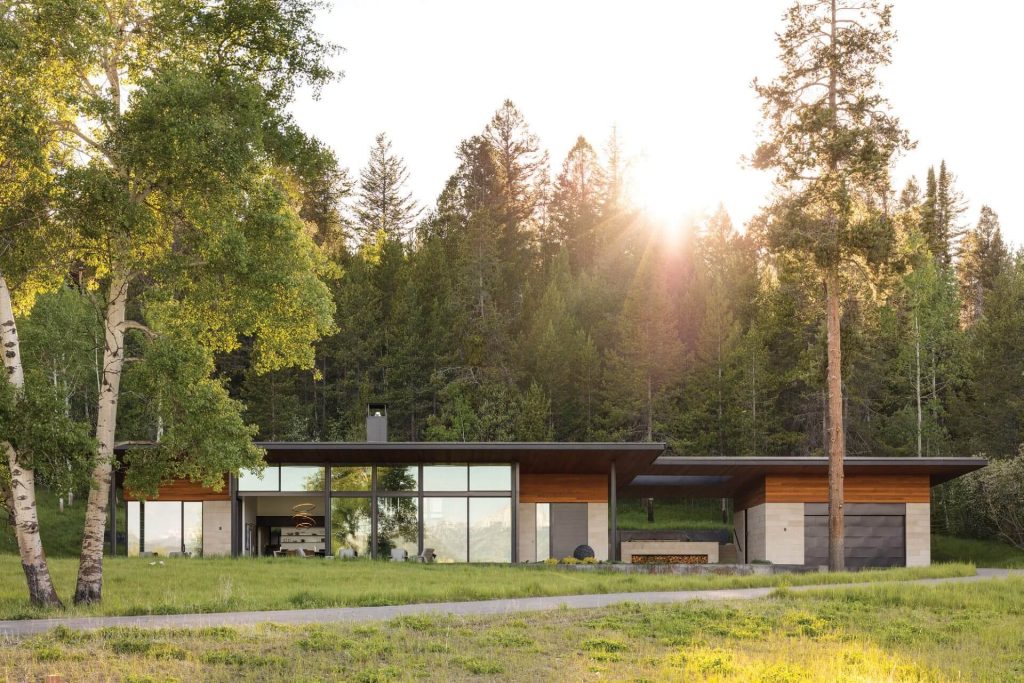 The single plane roof form spans the home’s footprint as well as the detached garage.

The home’s mountain modern style boasts contemporary shapes that suit its surroundings, rather than declare war on them. “The challenge is to create a structure that is of this time, with the materials available, but to do so in a sensitive way that doesn’t result in sterile white blocks,” says Burke. “You need an approach that allows you to push your experience from inside to outside, and yet still have it feel warm and inviting. So many contemporary buildings feel cold and look stark; they have no resonance, warmth, or scale.” Fortunately for the homeowners — East Coast dwellers whose getaways involve skiing, hiking, and climbing — Burke is a master of that architectural alchemy, translating the regional spirit of the Mountain West into material form. 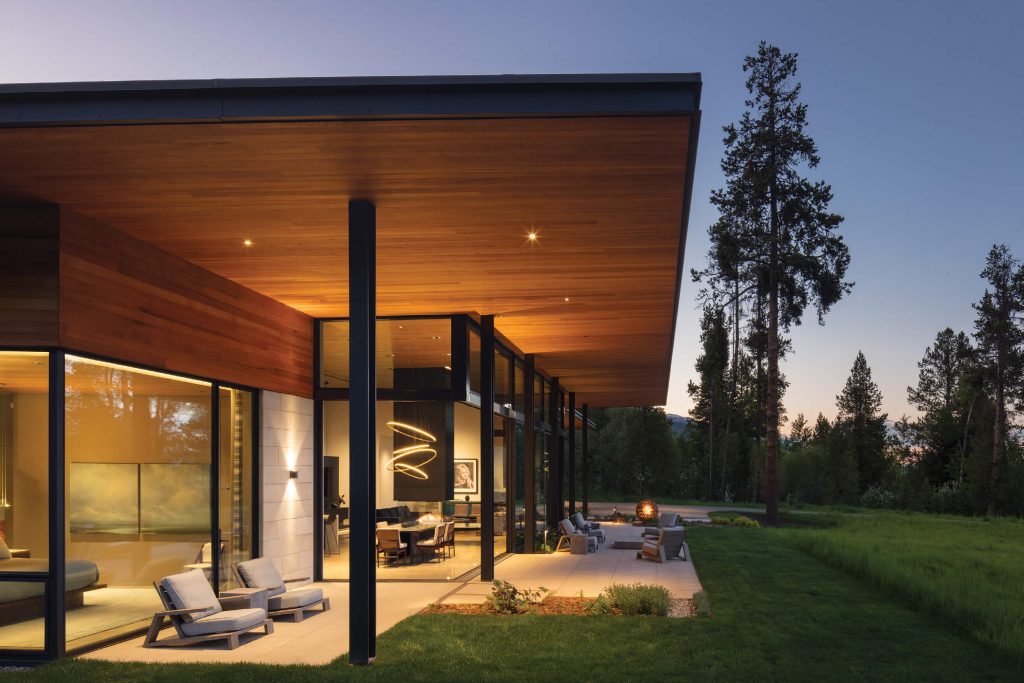 The home’s overhang provides a protective layer while animating the indoor-outdoor spaces.

The wood, with the interior mostly hemlock and the exterior cedar siding, is a reminder of a living presence amid clean lines that include a polished concrete floor in the living area. The pairing is in contrast with the darker hued walnut which was applied in the kitchen. CLB project manager Paige Hobson says the use of walnut on the kitchen cabinets celebrates its distinction against the adjacent steel. “Both components are dark but varied in subtle tone and texture; the result is that you look and stay longer,” she says. 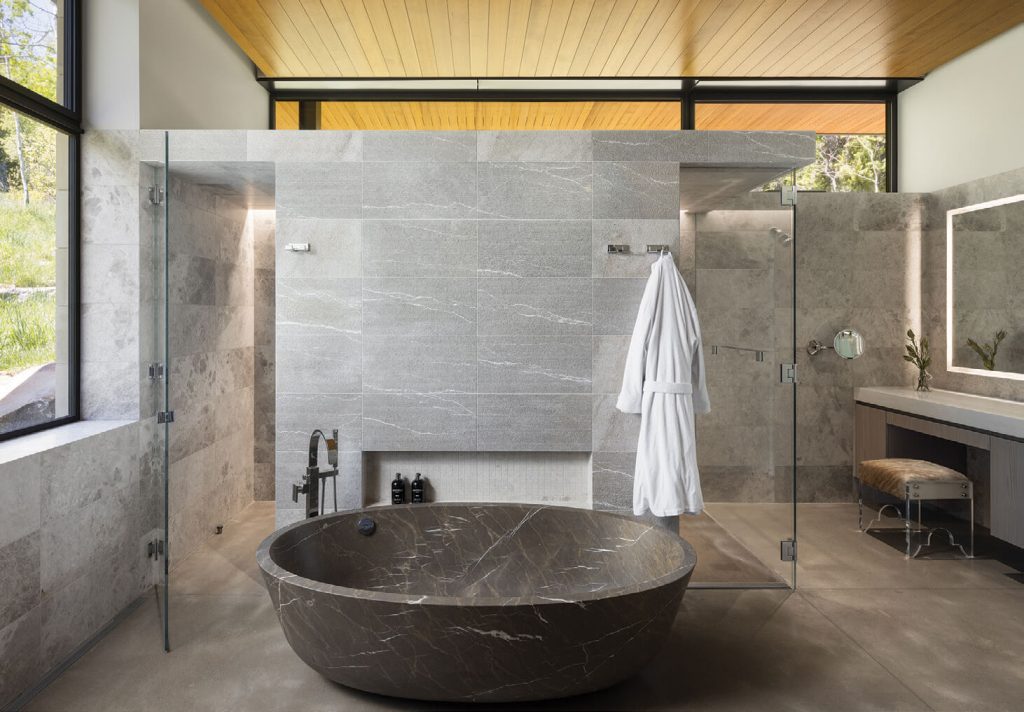 The primary suite’s bathroom is a composition of earth tones with visible subtle stone textures. The monolithic dark chocolate-hued stone tub was extracted from a quarry in Italy, the concrete floor has radiant heating — adding an element of coziness — and the white concrete vanity countertop features an integrated trough sink.

The building’s strong horizontal lines act as an anchor, even as the 12-foot-deep overhang off the roof of the living and dining areas leads the indoor space into the great outdoors. The split-level house is sculptural in form, yet made friendly by intention. The bathroom tied to the primary bedroom suite contains clerestory windows that illuminate the space with natural light, even as austerity gives way to coziness in the shape of cabinets crafted with artisan detail. And, in an environment where winter is a defining factor, the fireplace plays a recurring and pivotal role, adding to the home’s airiness. The blackened steel element soars to the ceiling, while flames appear suspended behind glass in an ode to what can only be described as good taste. 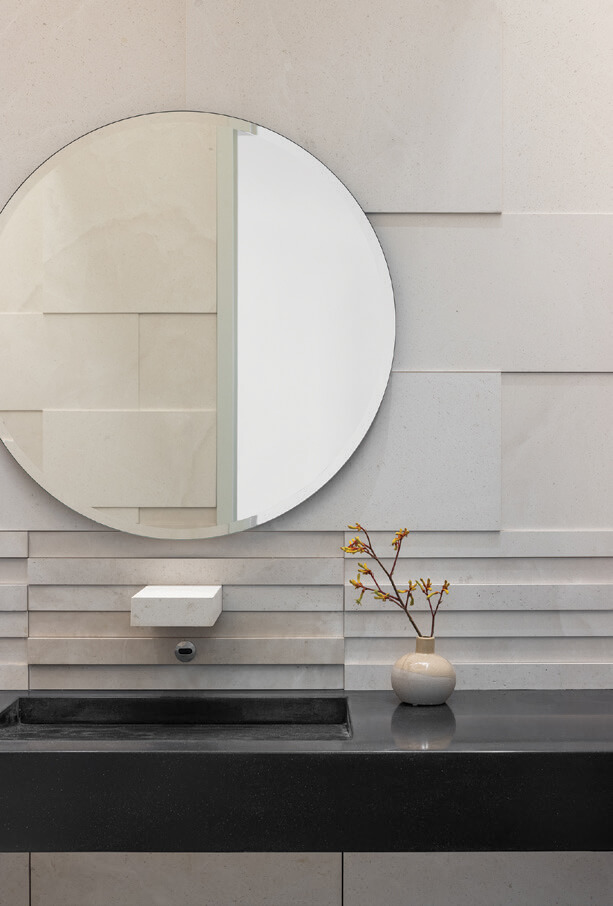 In this bathroom, the sleek vanity countertop, circular mirror, and modern decorative touches triumph in the clean simplicity of shape and structure.

That was the operative lens through which Shazalynn Cavin-Winfrey, head of SCW Interiors in Alexandria, Virginia, eyed the Overlook Residence. The designer drew inspiration from the surrounding mountains, yet maintained notes of individuality from the homeowners’ aesthetic, uniting beauty and function. In the living area, a couch cloaked in blue and made from mohair is matched with an antique Persian rug, and two mid-century modern chairs were re-upholstered in cowhide for an understated nod to the West. “The owners wanted their sense of identity to be infused in the house,” says Cavin-Winfrey. 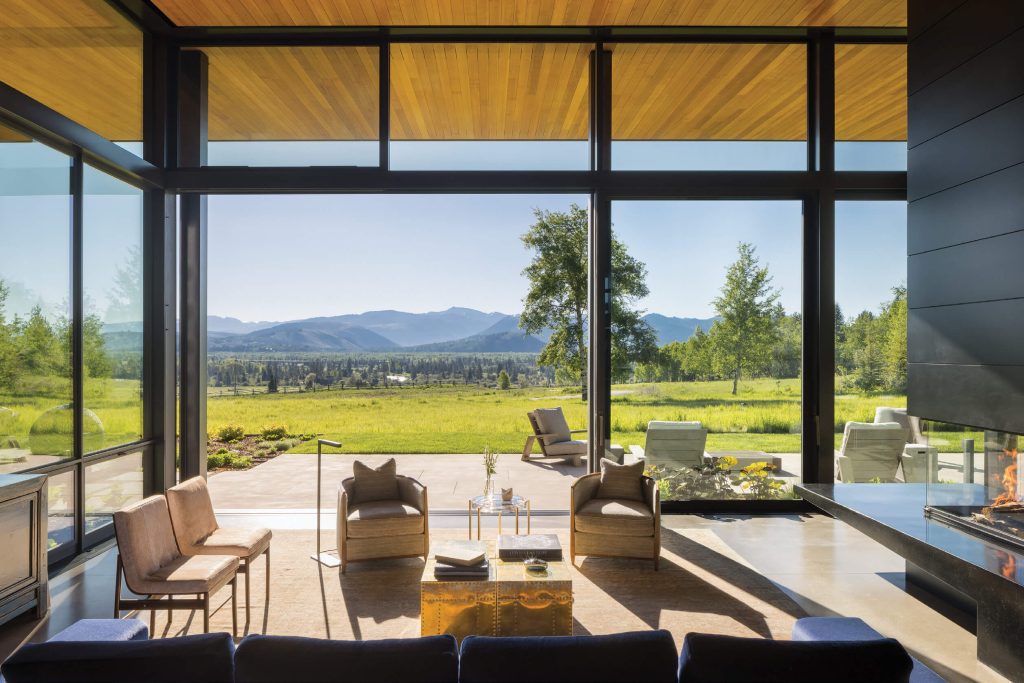 The northeastern corner of the main living room space provides sweeping eastern mountain views in a poetic gesture that celebrates the designs of nature.

Overlook triumphs in its aim, integrating with, rather than interrupting, the surrounding environs. Serene in aspect and subtle in approach, the house carries the appeal of confidence; it is a building that need not attract attention. And, for that very reason, it does. 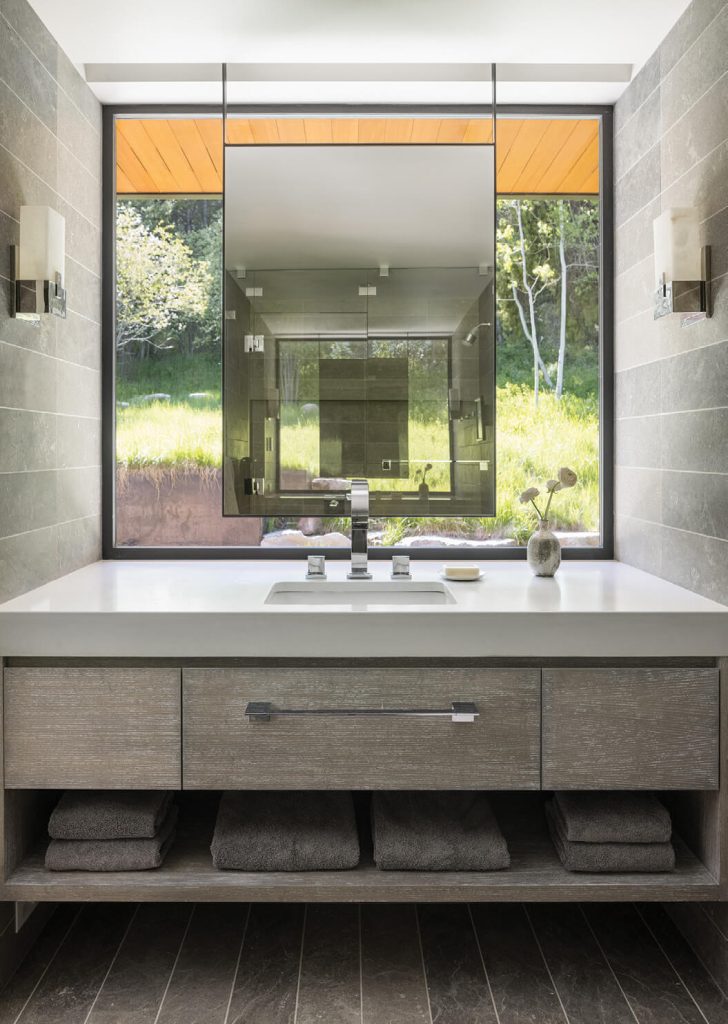 In a guest bathroom, a suspended mirror floats in front of the window to provide privacy even as it opens up the space.