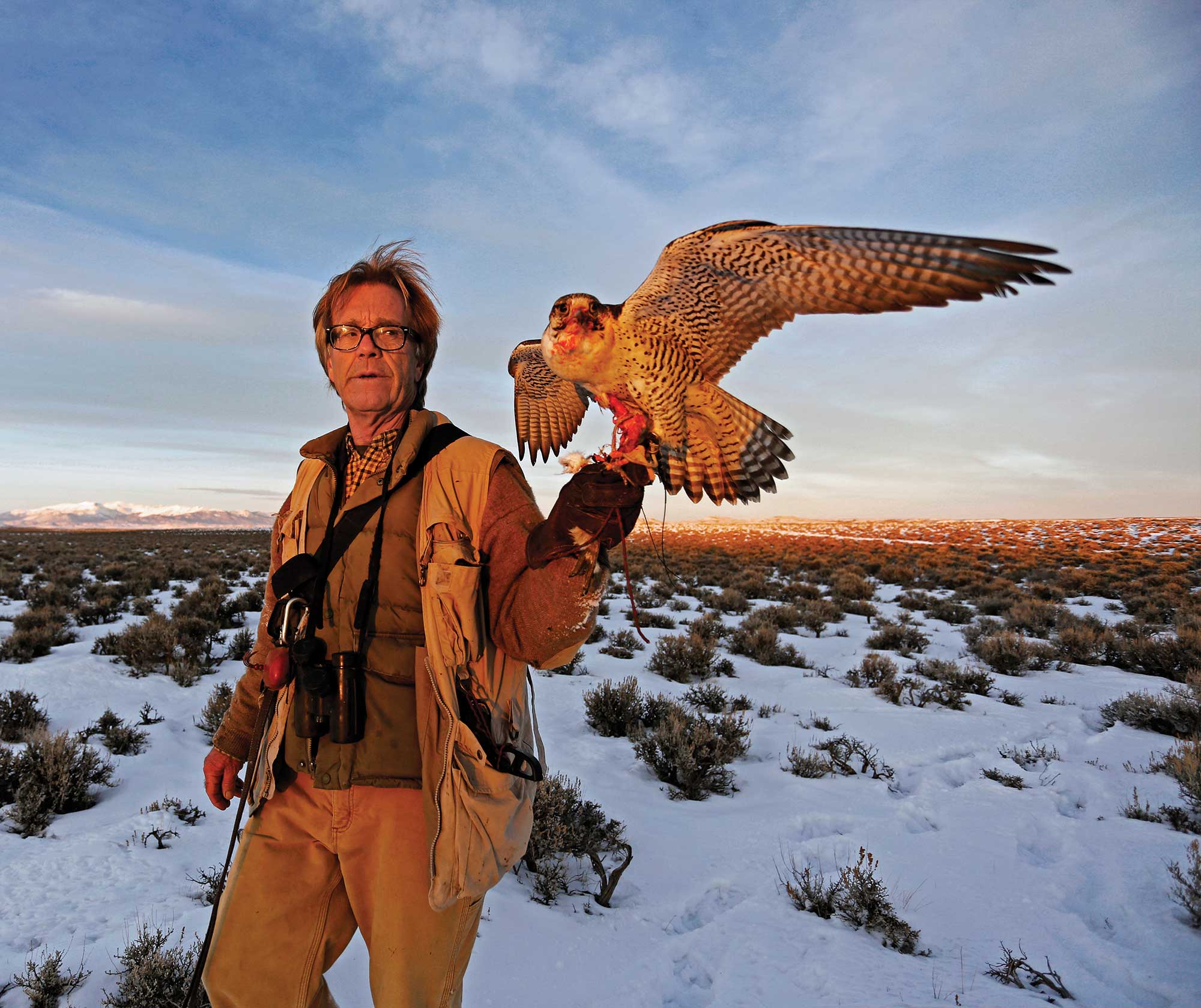 01 Dec Over the Edge

ZANDER DROPS HUNDREDS OF FEET FROM THE SKY with unreal speed. I catch my breath and chills shoot up my spine. Zander is a gyrfalcon-peregrine mix, and when tucked up tight in downward flight his kind can beat speeds more commonly associated with a Ferrari. His trainer, Steve Chindgren, has clocked him at above 200 mph.

Zander is reacting just the way he should after long years of daily training during the sage grouse hunting season. After two months of training for this year’s hunt, the bird is finally fit enough. Chindgren coaches him to a wild state of preparedness, weighing him daily, in pursuit of the proper level of hunger that will embolden his predatory nature and artful dives.

The training has paid off. Now, Zander falls in a steep diagonal line, folded into a snug ball of muscle and feathers. He snaps his wings taut as he approaches the ground, creating an impressive flare that stops the speedy fall cold. Chindgren’s hunting dog Lieutenant Dan has just flushed a flock of sage grouse out of the brush after following a scent trail in jagged lines at an astonishing speed. He goes on point to wait for Chindgren to cinch the noose by releasing his falcon.

The chase doesn’t last long as the gyr-peregrine slams into a grouse midair with enough speed to produce a thump audible to us 100 yards off. In a blur of feathers, the birds sink into the sagebrush sea where the true struggle begins under a bitter canopy of tiny sage leaves. The sage grouse’s primary forage through winter months is now shading its final struggle to survive.

Chindgren follows the sound produced by a homing beacon on the falcon using a tri-antennae receiver that triangulates on the device. The sound increases in volume if it points at the bird, making hunting the hunter a game of “hot or cold.” As we walk, Chindgren gives a running commentary of what he thinks is happening based on the sounds he’s hearing. I hear static at varying pitches; it emerges as a narrative to him.

He tells of a fight going down under the canopy; when the static grows static, the chase is over. Soon the “most extreme falconer in North America,” as his fellow falconers call him, finds his feathered friend in a 6-foot tall stand of sagebrush. The bird has already eaten the head off the grouse — the only part Chindgren allows it to consume. Chindgren will cook the breasts tonight for dinner. The alternative — if he came home without fresh game — would have been hot dogs.

Zander is one of three trained falcons out today with Chindgren, who has also brought along two hunting dogs and a number of homing pigeons trained to zip back to his home (dubbed the “House of Grouse”). When Chindgren unexpectedly flings a pigeon out of a satchel to draw Zander’s attention while the bird is flying off to land, he laments that he “wasted” the trained pigeon since the falcon didn’t even notice.

“It’s quite the elaborate setup to even do this,” I comment.

Chindgren laughs wryly, a half-smile tugging at one side of his mouth. “I know.”

Today the House of Grouse is probably 30 miles away; Chindgren has gone far into the sagebrush sea of central Wyoming seeking solitude on the last Saturday of gun-hunting season.

Gun hunters terrify Chindgren. They take shots at his falcons from time to time, either through ignorance or perhaps thinking they are doing a favor for the almost-endangered sage grouse (that they also hunt), by trying to remove a known predator.

“I’m lucky they didn’t lead it right,” Chindgren says. I get the feeling that the hunters are the lucky ones. Chindgren is understandably attached to his birds. While he strives to keep them as wild as possible so they retain their predatory nature, they are still like children to him. While he’s never lost a bird to a hunter, he’s lost 10 to eagles, which worry him more than weekend warriors. Losing birds is financially and emotionally devastating — one bird can cost as much as $8,000 to acquire, plus untold man-hours of training. But he keeps his feelings toward the eagles in check.

“I don’t hold a grudge or anything against eagles,” he says. “I just don’t.”

After the successful hunt, Chindgren works with his other falcons on a drone. One is another hybrid he has bred, and the last is a pure white, Arctic gyrfalcon gifted to him and named Comet. When Comet flies out to the horizon instead of flapping up to 500 feet to hit a sage grouse wing attached to the four-prop drone, Chindgren becomes visibly alarmed. He hurriedly packs up his elaborate setup, cursing himself for not going to an area with more roads running in either direction.

“This is not good,” he says. Comet is the last falcon of the morning to train, meaning the chill in the air has been replaced with Indian summer warmth — an invitation for eagles to come out and soar on thermals.
“A big white bird out here is like a friggin’ neon light to an eagle,” Chindgren says. He finds a road, turns down it with his tracker hanging out the window and soon announces Comet is close. He exits the vehicle and starts whooping while throwing the wings and back of a deceased sage grouse into the air. Comet soon streaks over a low horizon. I point him out to Chindgren, who’s been blind in one eye since a childhood accident involving his brother, a needle and a dart gun.

He looks at me, a genuinely relieved and happy smile plastering his face. “We got him. Good.” He slaps me a high-five with his left hand, which is moist with sweat after wearing the thick leather falconry glove that protects his flesh from his birds of prey. “All’s safe now.”

Falconry is Chindgren’s way of life. He started working with his first hawk at age 9, perching alongside it in a tree to teach it to hunt snakes. His parents, he says, didn’t have much choice about his chosen obsession.

By the age of 16, when he began driving, Chindgren was single-minded in his passion. He escaped at every opportunity to Emigration Canyon, near where he grew up in Salt Lake City, to teach his birds to hunt. He calls himself obsessive-compulsive with falconry, which helped lead to the title of his biography: Falconer on the Edge. He just wanted it titled “The Falconer.” His patient wife would have called it, “Falconer Over the Edge.”

He spent 14 hunting seasons camping on the Big Sandy River in Eden, Wyoming. Eden is a falconer’s paradise: Chindgren says it is possibly the best sage grouse hunting area anywhere. It is not known for its warmth, though. The piercing High Plains wind howls during the winter falconry months, and his trailer never had heat. That long, cold stint ended when his business partner David Kennedy offered to help buy the House of Grouse after seeing his sport — “a sport of kings” — in action. The home is now a monument to sage grouse hunting, housing the king of Eden.
Chindgren says falconry is a sport of devotion that takes “an enormous amount of time” to perfect. “You have to make yourself successful without having a job,” he says.

So he decided to share his love of birds with the public, and began putting on shows at Salt Lake City’s Hogle Zoo. He’s known widely now as “the bird guy” because of the shows, which draw a quarter million people annually. He is grooming his daughter Jenalee to take them over.

Eric Peterson is the elephant keeper at the zoo, and often compares notes with Chindgren, who shares a lot of the same training philosophies. He says elephants and falcons are motivated by the same thing: food. Elephants, however, don’t fly (and they weigh a couple of pounds more).

“The whole circle of understanding and trust and training all going on at once to make everything happen like it’s supposed to — it’s a really cool thing,” Peterson says, referring to both the birds and dogs Chindgren has trained and the elephants Peterson works with. Peterson knows from experience that Chindgren’s hunting setup is no simple matter. “You can’t just go in there and expect them to do what you want them to do. That’s the key: building that relationship.”

Peterson doesn’t have to think long before agreeing with Chindgren’s wife about him being over the edge in his zeal for falconry.

“Through him I’ve met other falconers but I don’t think there’s anyone as passionate for what he does,” Peterson says. And, he adds, Chindgren is enthusiastic about conserving the falcon’s prey. The greater sage grouse narrowly avoided an endangered species listing in September, partly through volunteer efforts Chindgren helped coordinate in Wyoming: measures that involved everything from counting breeding grounds, or leks, on outings with people like Peterson, to installing life-saving reflectors on fence posts throughout the state.

“We go out and it doesn’t matter what it is; if it’s a mountain bluebird we get geeked up about it,” Peterson says. “He respects every aspect of nature and its relation to every other aspect of nature.”

And that is what pushes Chindgren over the edge. 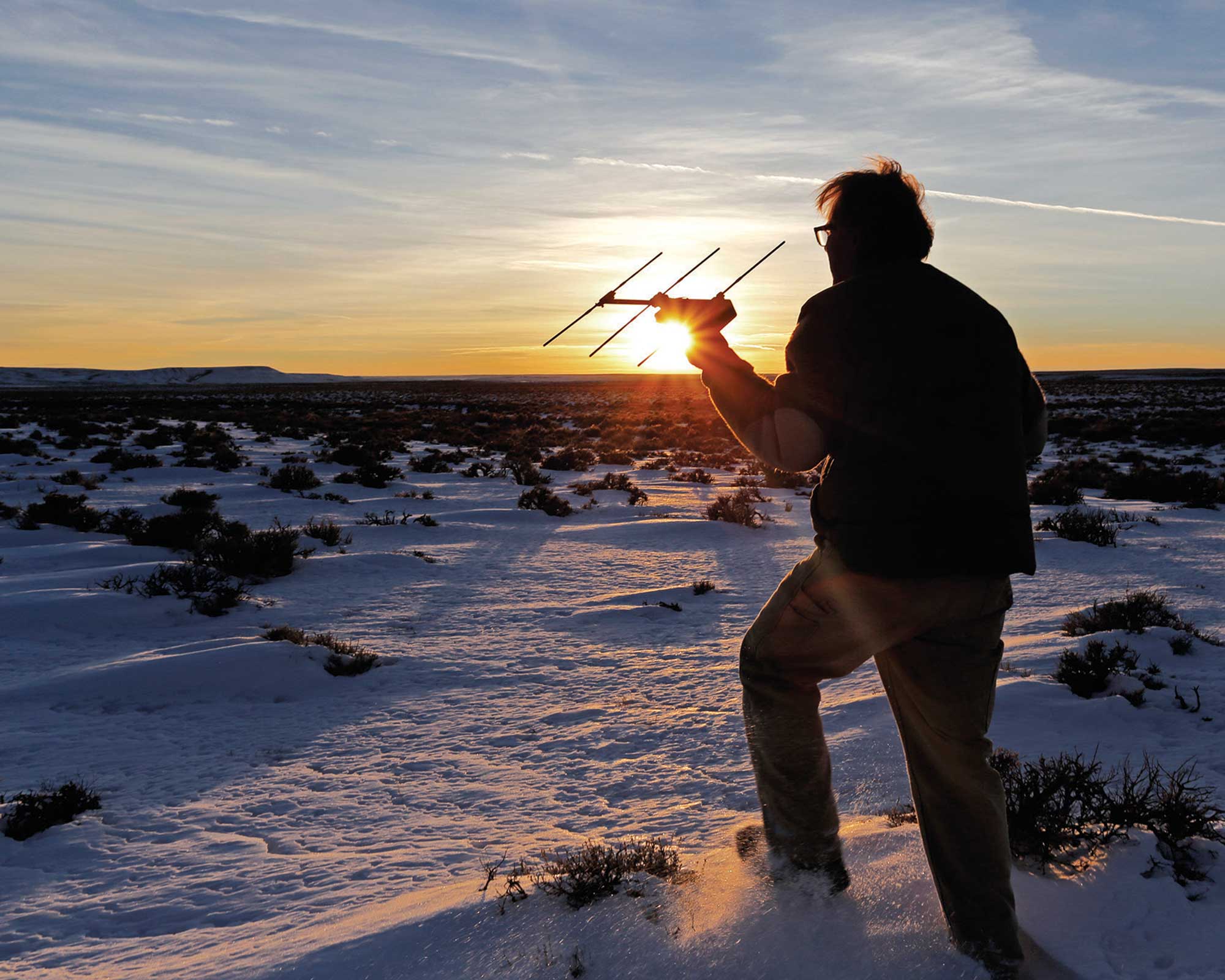 Chindgren uses radio telemetry equipment to track down his precious bird after it sank into the sage sea. 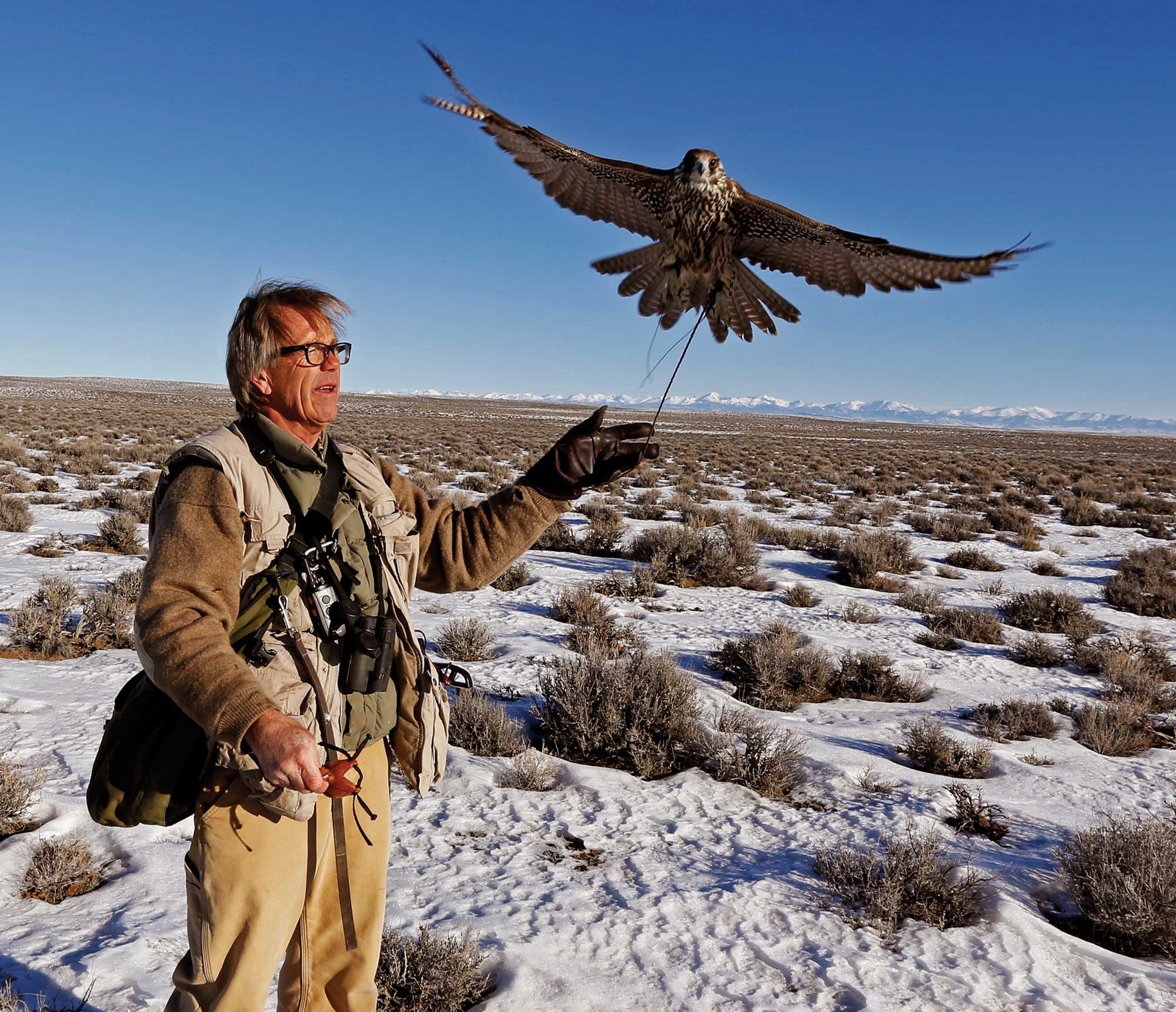 After being dehooded, one of Chindgren’s high-strung falcons takes to the air 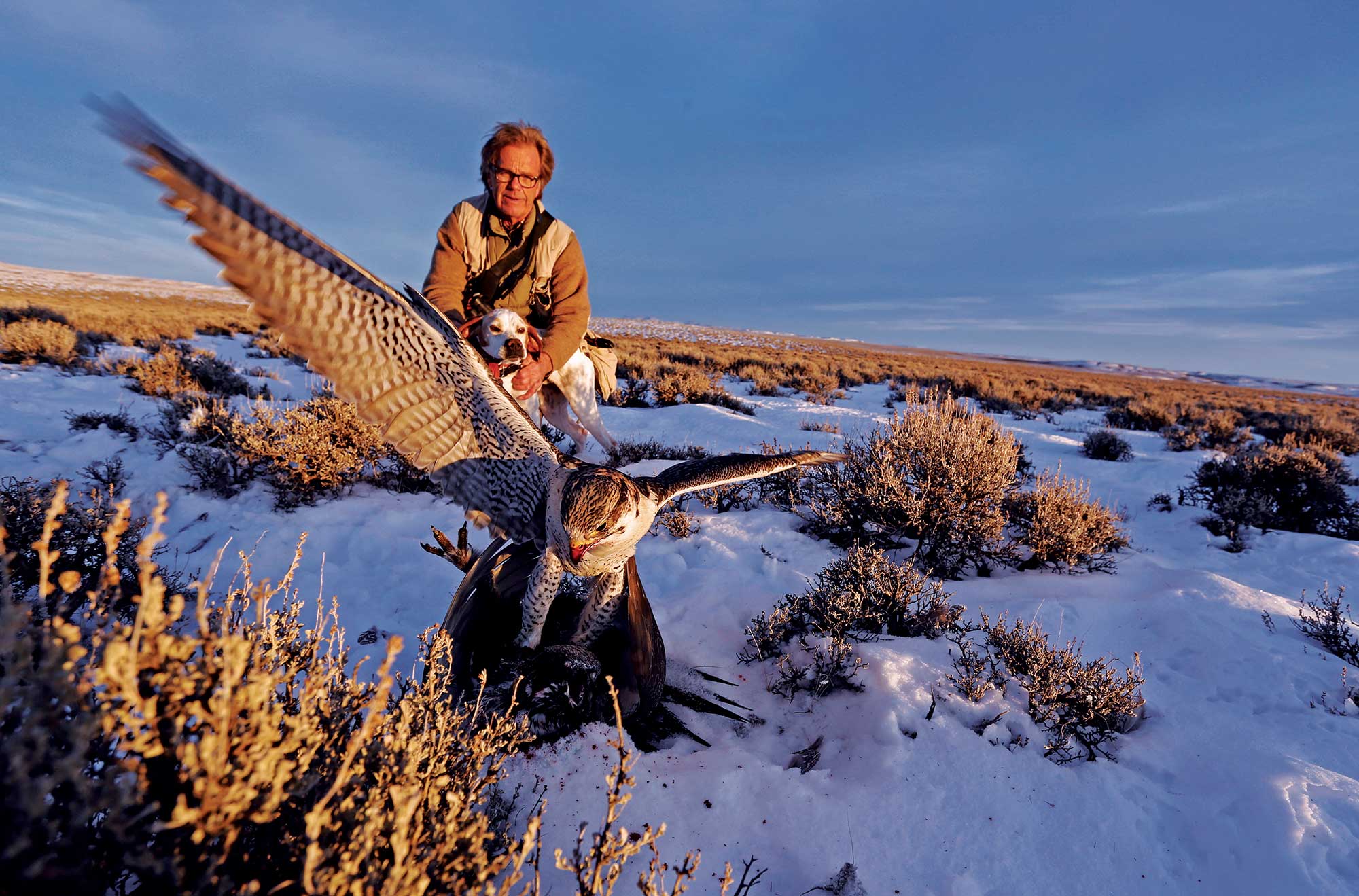 Zander beats his wings in triumph while eating the head off his prize catch. 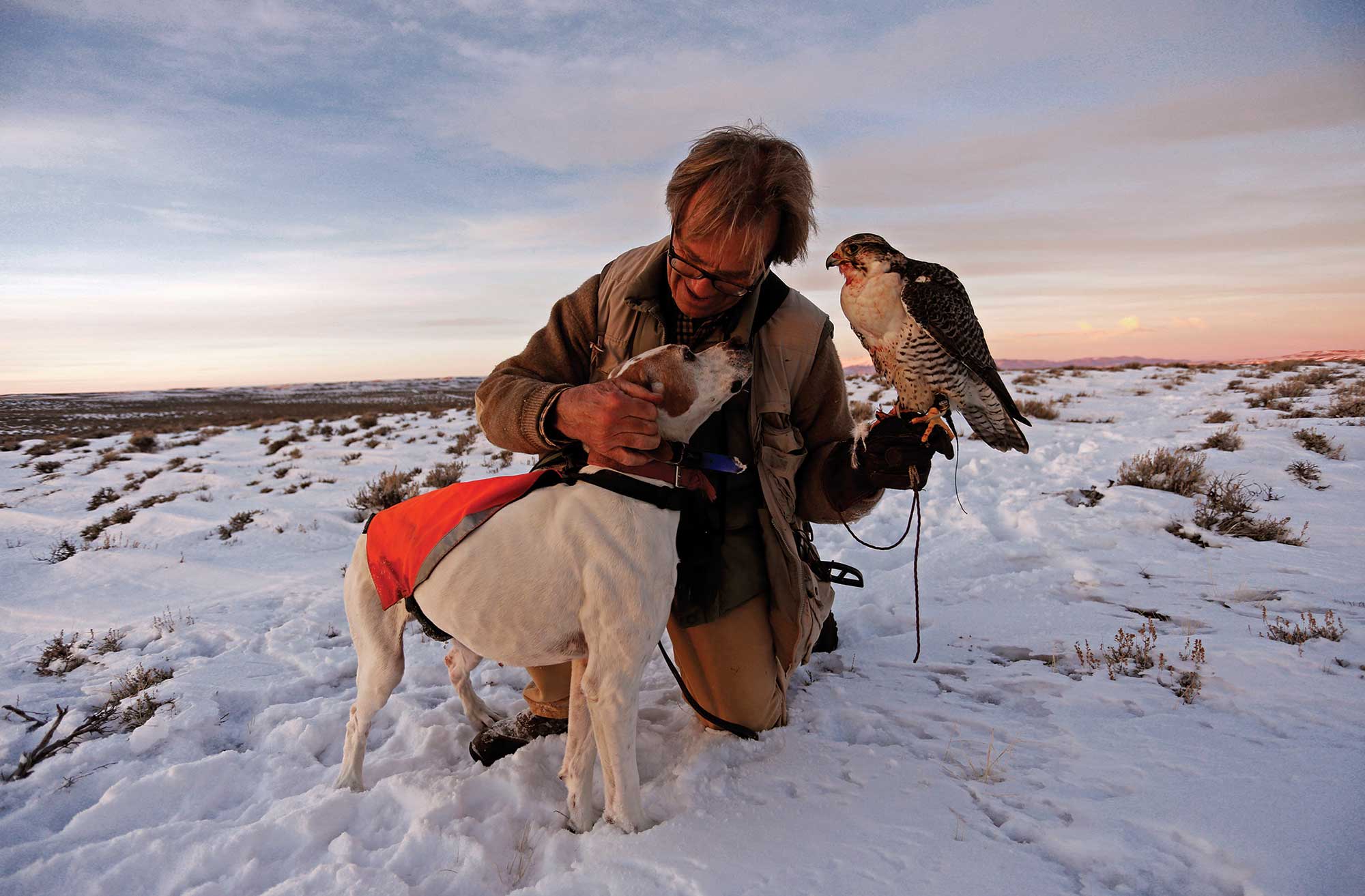 Chindgren thanks TJ for his role in the hunt. 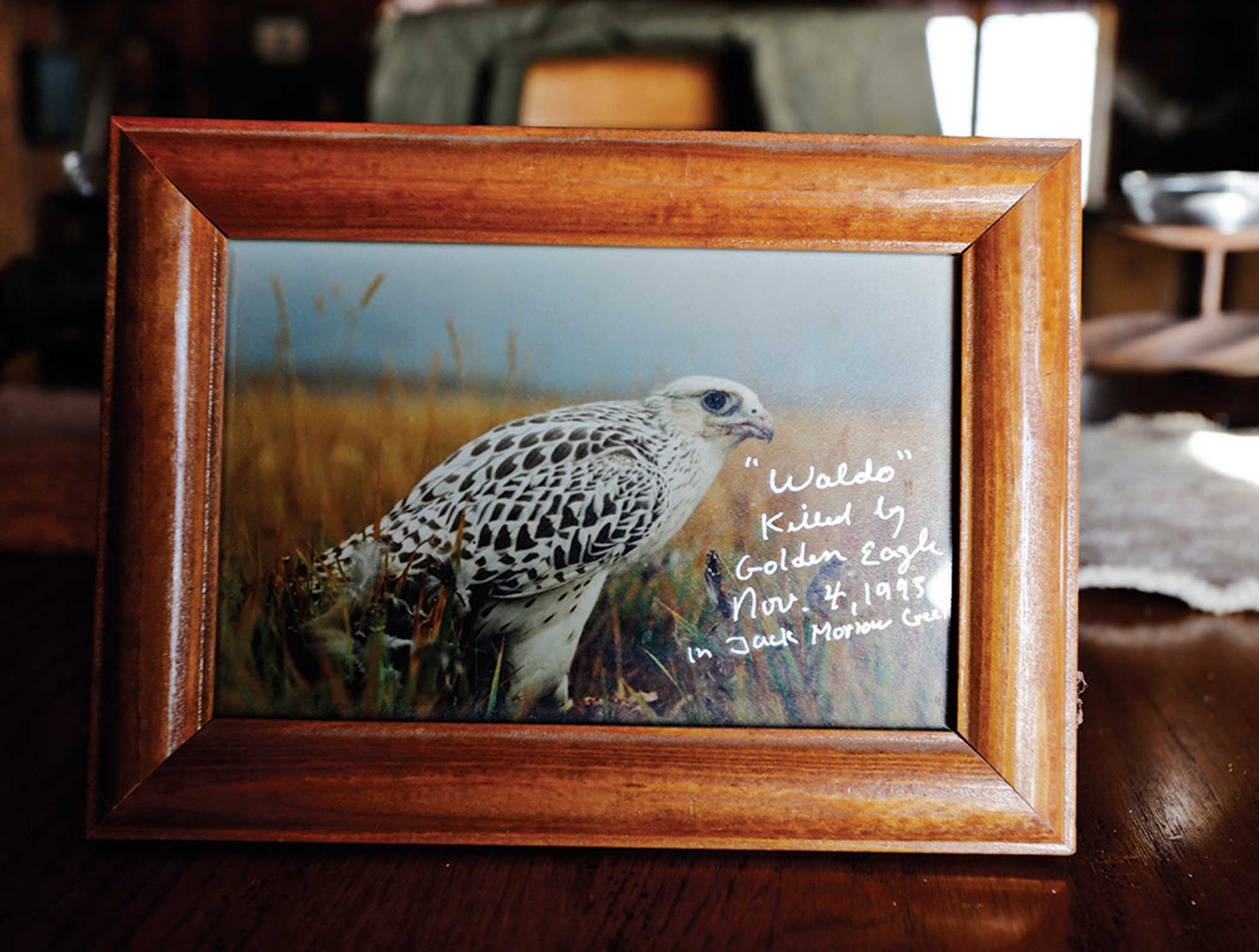 This memorial pays homage to one of Chindgren’s “children” he lost to a golden eagle. The white falcons make particularly tempting targets before snow sets in. 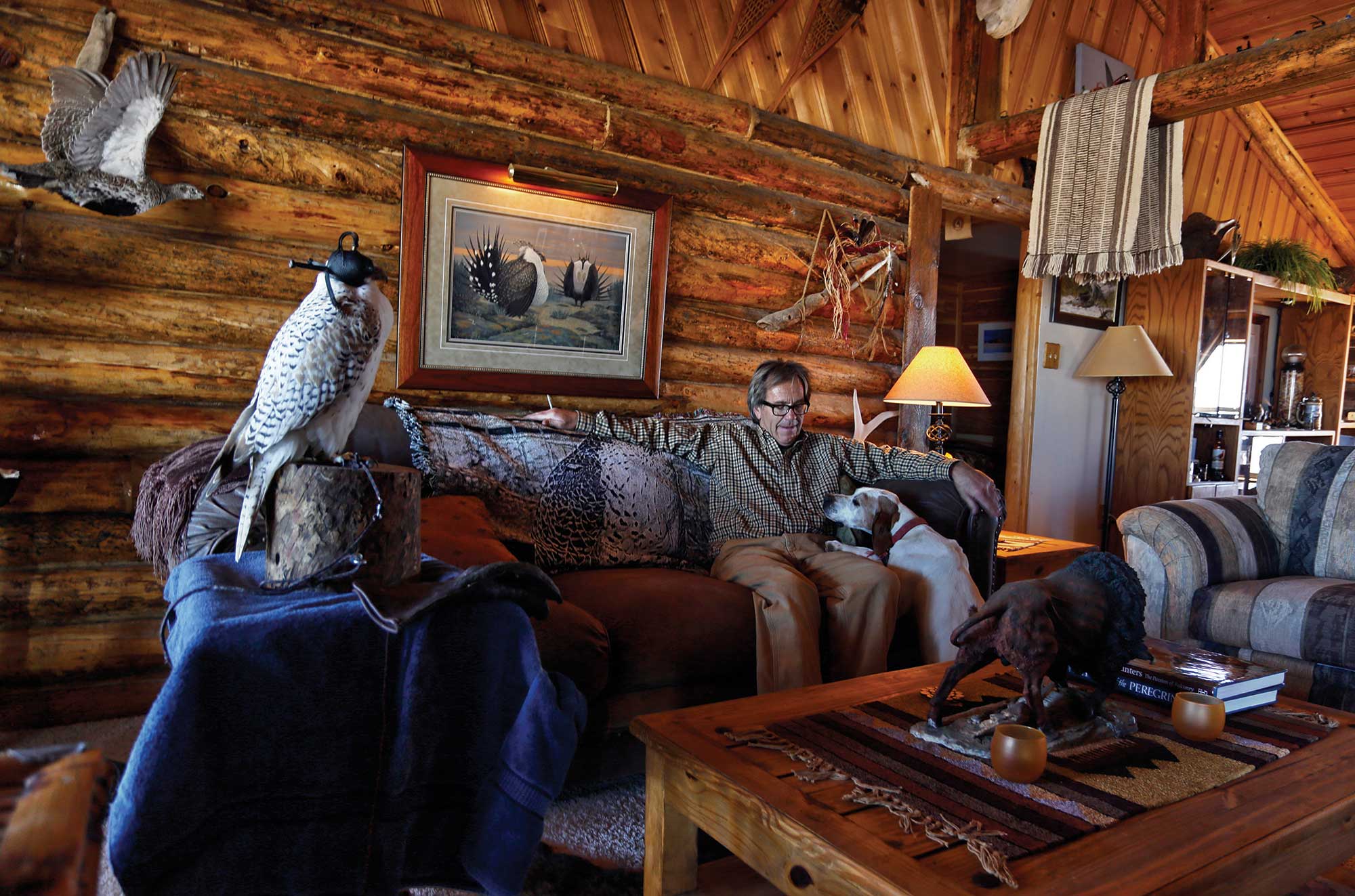 Chindgren’s “House of Grouse” in Eden, Wyoming, is a monument to birds and falconry. 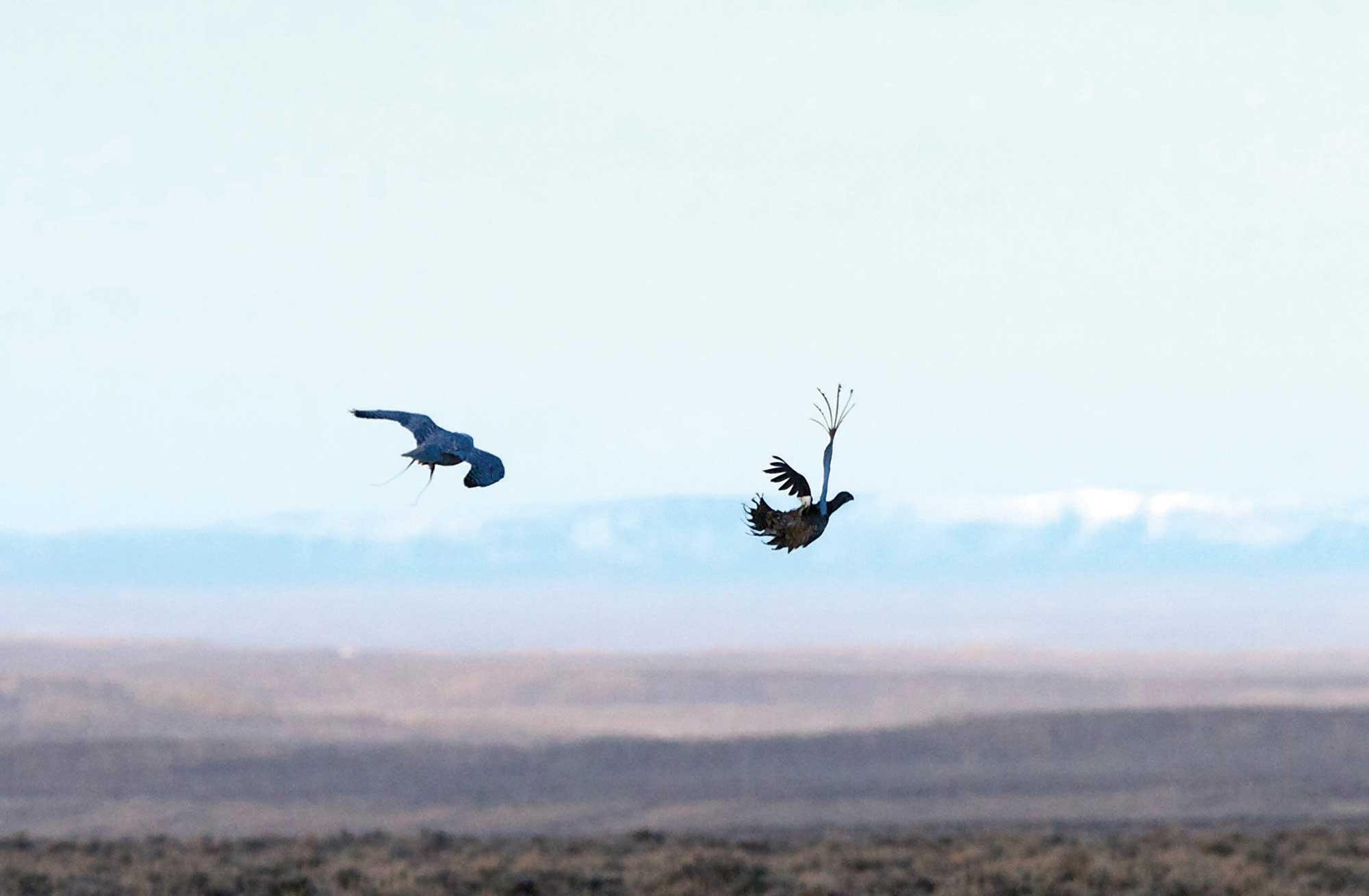 A falcon closes in on a frantic sage grouse flushed out by hunting dogs.