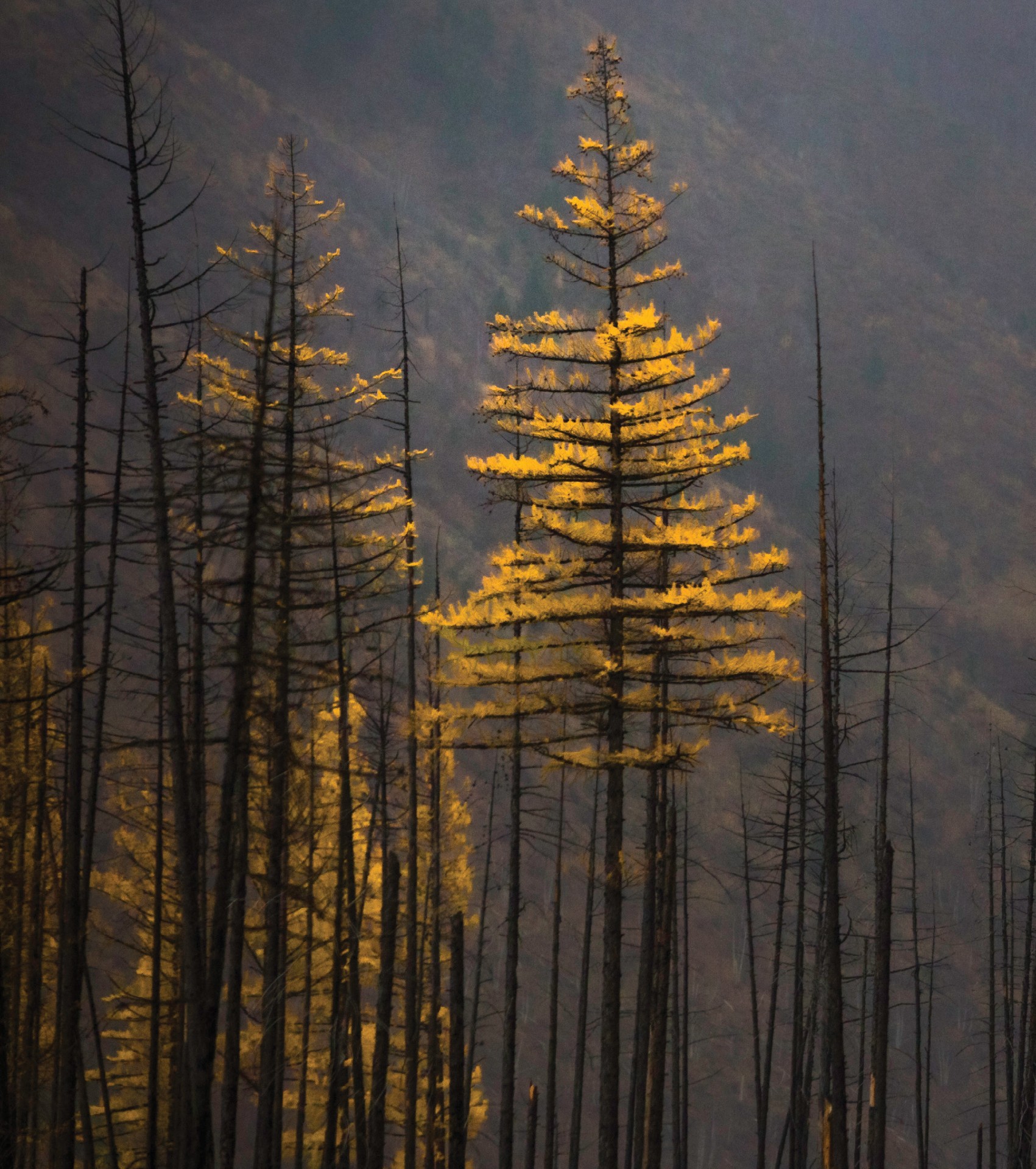 To say that we need to re-make our relationship with fire is both accurate and dangerous. Accurate because, well, not so many folks cook or heat with wood anymore. I suspect a lot of people’s only experience with it comes once or twice a year, lighting birthday candles and maybe a pumpkin. Dangerous because there is a belief by some — an assertion even by those who in their hearts know better — that we can control or manage fire. But fire manages itself these days. Many of those among us now have left — fled is a word sometimes used — California. There’s no real reason to doubt that what has come to California will be coming north to Montana as the years burn toward the present, leaping with sparks into the future.

About re-making our relationship with fire — which is to say, into one of deference, respect, and, where possible, avoidance — fire’s not all bad. In fact, fire can often be good. Elk hunters know this. Scientists know this. Fire, as much as ice, has formed this state we love so fiercely: not just glaciers, but annual summer wildfires. It’s fire that paints revegetating landscapes with autumn-brilliant aspen, perhaps the most important wildlife tree in the state and an under-represented forest type due to a century of fire suppression (back when fires were able — for a little while — to be kept down).

The majestic old-growth forests of larch — with its incredibly thick bark (especially at ground level where protection is most needed) — exist solely because of fire, which recycles the understory, creating the rarest forms of old-growth in the West. Poets know this. For instance, Robinson Jeffers wrote:

What but the wolf’s tooth whittled so fine
The fleet limbs of the antelope?

How frightened should one be of fire? Respectful might be a better word. Evacuation plans (including pets) are better when sorted out in, say, April, rather than mid-August, when a knock comes at the door, and you have five to 10 seconds to leave. For country dwellers and forest denizens, secondary ingress/egress is a good idea. It’s kind of like walking in bear country with bear spray: It pays to notice and think about things — wind direction for instance — what football players call situational awareness.

Again, preparation: Studies show that the best way to protect homes is not clearcutting far into the backcountry, but instead removing or reducing fuel within a set distance, often 30 feet. Should you happen to have a fire near you, rather than fear it, explore it, season by season, and then year by year. I remember being in Yellowstone following the big fire in 1988 and overhearing one elderly woman saying to another, her voice quavering with heartbreak, “It’s all ruined, just ruined!” But, there’s so much good about fire. Doesn’t most fear bring unexpected lessons with it, even gifts? In the spring, following a big fire season, we get morels.

Fire, it will be remembered, creates smoke. There will be a lot of helicopters in the air, all summer long. One needn’t be a combat veteran to experience tremors in body and soul when subjected to the just-overhead ceaseless thwopping and dragonfly scurrying of an iconic piece of military equipment.

Another dangerous thing about fire is the ease with which our mindset slips into the thought process of military campaigns (what the poet Donald Rumsfeld called “the long war”). It’s the mindset of attack when often the land is just trying to take care of itself. There are bulldozer-like tanks, slurry bombers, incident commands, and evacuation orders. With the California fires, moving north with the heated breath of what grizzly advocate Doug Peacock calls “the beast of our time” (global warming), such strategies are good for getting people out of harm’s way. But more than ever, the fires of today create their own wind, their own weather. We’re not fighting something that has desire or ideals. In the new-old arid West, “fighting” fire is increasingly like fighting air, or gravity, or stone. We need better plans — how to protect structures, how to get people out of its path. The attack mindset suggests victors. There won’t be victors in global warming for a long, long time. Longer than anyone we know, or ever will know, will live to see, even if we reverse course now.

Mortalities rise dramatically during wildfire season, which used to just be August, but now can run from May into October. Folks with compromised cardiopulmonary conditions are at incredibly heightened risk for becoming hospitalized; Montana’s air quality — so much Big Sky unseen — is tenfold worse than that of downtown Mexico City. So here’s another thing: Be sure to bring N95 masks — not just to avoid unintentionally killing someone’s sweet old grandmother through inadvertent COVID-19 transmission, but to prevent flecks of ash attaching themselves to your tender pink alveoli like flies to flypaper.

It’s possible that a reader hasn’t considered the relationship between fire and clearcuts. There’s an old saying that one needn’t be a doctor to look at a person and know they’re sick. That’s much the way it is with clearcuts. The land bleeds: bleeds sap, bleeds water, bleeds out life. The soil, once protected by a multi-layered canopy — often an intricate, sophisticated one — bakes, scalds, dies. And that drying-out makes it — you guessed it — more prone to fire. Clearcuts don’t stop wildfire, they bring it. They dry the remaining forest out, make wind shears that topple the remaining trees into ladder sticking, and create wind tunnels across which the drying, heated gusts — and fire — accelerates.

There are very few forests in Montana that have not burned at one point or another. Large portions of one such forest in northwest Montana’s Yaak Valley are perhaps 1000 years old, possibly older. Referred to as the Black Ram Project, it’s bizarrely slated by the U.S. Forest Service for several hundred acres of clearcutting and various forms of “regeneration harvests” for “resilience,” despite the fact that the Forest Service’s own maps show much of the area has never burned. Black Ram is also being advertised as a fuel reduction project, despite the fact that much of it has never burned and is more than a dozen miles from town, in a valley where summer and fall winds blow from the south into Canada, rather than from the north toward town. In 2018, a wildfire started in the region adjacent to Black Ram, but it petered out when it encountered the wet alpine soils that have grown such giant and ancient trees. It seems like a really cool opportunity to study this forest, rather than to erase it. What it is, is a miracle.

These are the things to remember: Fire runs uphill. Fire is just wind and aridity that’s combined and ignited. When it’s hot and dry at these unprecedented levels, it’ll burn anything. Fire is weather. Back in the days of little pissant seasonal grass fires, many Indigenous peoples farmed big game with fire, releasing pulses of nutrients from fast light burns, which summoned grazing animals — painting with fire, black and green, in rhythm with 10,000 years of inhabitation.

You can be careful — goodbye to fireworks on the 4th of July (I, for one, won’t miss celebrating the bombs bursting in air). Montana’s beloved land is on fire; it’s burning, changing. It’s not all bad. But be safe. Be smart.

Last fun fact: Of Montana structures that burn in wildfires, you’ll never guess what the most common denominator is? I mean, you’ll never guess. The answer is a craft that glides on water: the noble canoe. The plastic/plasticized canoes are like giant jelly-napalm-bombs in the heat, and they’re usually turned upside-down, leaning against the house. Do yourself a favor: Move it at least 30 feet away.

Rick Bass is the author of over 30 books of fiction and nonfiction and a recipient of a Montana Governor’s Award in the Arts. He’s a founding board member of the Yaak Valley Forest Council, Save the Yellowstone Grizzly, and The Montana Project, and is working to help protect ancient forests in the Yaak threatened by the proposed Black Ram timber sale. Bass will be teaching a writing workshop at the June 2022 Norman Maclean Festival in Missoula, Montana.