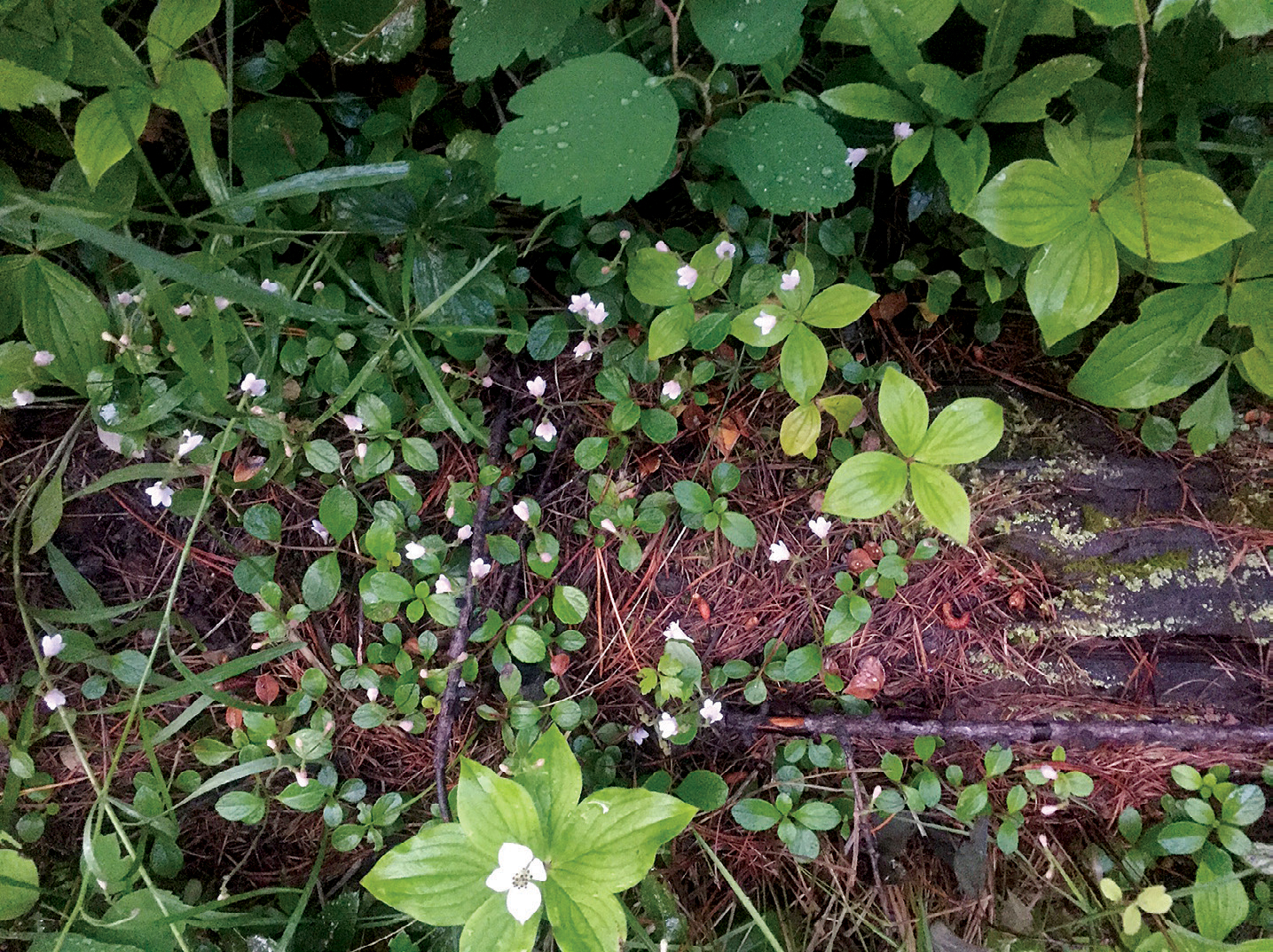 I live in an inland rainforest in the northwest corner of Montana, the wild Yaak Valley where — it’s true — in June, one is often bloodstained with the smear of mosquitoes that hover and swarm in sheets and waves. For so many of us this year, our relationship to time has changed. I want to believe the introspection has allowed us to think over some things: to reassess, and imagine something better. And to act on it.

The Yaak is a land of fire and ice, where — in late July and August — little wildfires skitter along its ridges like orange ingots tossed by the passage of an invisible locomotive, the iron wheels clattering against the tracks. But there is another kind of fire, also pumpkin-colored but slow and patient, burning beneath our feet, beneath all the fallen logs, in all hours. 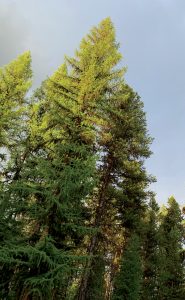 The centuries-old fire of rot, which in its complicated, elegant dissolution feeds the nurseries and galleries of the great forests-to-come, while preserving the ancient forest-that-still-is, where living and dying are all tied up together in the great beauty that is an old forest, different from any other ecosystem on earth. It’s a place where there are still so many mysteries, we don’t even quite know what questions to ask yet.

Leaving my garden of kale and raspberries one fine early summer day, I hike up toward a farther, wilder garden: the Edenic old forest that sits above, guarding the headwaters of the Yaak River as it emerges, fed from a thousand or ten thousand seeps up along the Canadian border. It’s as far north as one can get in the state of Montana, a northern tier of the sub-boreal forest stippled with mysterious frost pockets, which, in these heated times, may serve as stepping stones not just for evolution, but also for survival. Its shining, filtered water emerges from the clutches of millions of underground miles of the roots of giants: thousands of acres of colder, wetter forest. It’s the hope of many that it can serve as a climate refugia, if we can make a way for species to get here. If we can make a way for them to get back on the Ark. 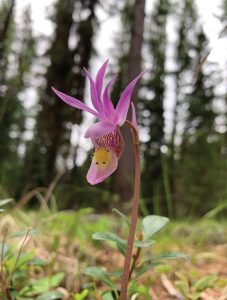 This strange forest — possibly the largest and oldest forest in the valley that has not burned in recorded history, a great rarity in the world, much less in Montana — has, despite its rarity, never been studied. Thirty miles upwind of the nearest human inhabitation, it is solitary: the wildest, farthest corner of the little million-acre garden of the Yaak. The place where the water begins.

Here, time seems to act differently as soon as you step into the old-growth subalpine fir and spruce, roughly 300 years old and counting, the soil so spongy and soft that to be in it is like trying to walk in a child’s bouncy castle. The cold breath, even in summer, is one of the signatures of the sub-boreal fringe, here at the southern end of the Purcell Mountains — Canada’s largest mountain range, and a straw, a siphon, into the deep boreal that is the cool loving lungs of the continent. A place in balance, where rot and rebirth proceed in a dynamic equilibrium. It’s a refrigerated fairyland, a scientist’s nirvana, an 800-year tour of the inside of God’s mind. “Gap creation,” ecologists call it, where a complicated brew of root mycorrhizae, puffs of spores, stable seasonal temperatures, plant and animal species at all levels (soil to canopy), and water, lots of water, keeps the whole thing — which I think of as an orchestra of light — going. 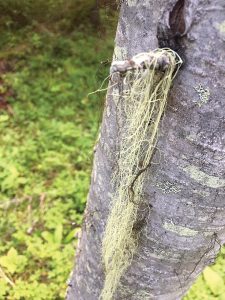 A thousand years ago — not quite a geological time-scale, but getting closer — the world here was hotter and drier. And in the Yaak, it is threatening again and happening again. Scattered here and there in what the Kootenai National Forest calls Unit 72 are a few of the old ones, the even-older ones, who were here back in that hot, dry time. Immense Western larch, only one or two per acre now, possibly 600 to 800 years old, live in synchrony with the “younger” 300-year-old dominant new giants, spruce, subalpine fir, hemlock, and cedar; the latter forest able to hold 80 percent more carbon on-site and in the soil than other forest types.

Think about that for a minute. Eight hundred years. The bubonic plague, the Italian Renaissance, the rediscovery of North America, Lady Gaga — none of that brief stir of wind had happened yet, when the last stand-replacing fire came across this swampy floating forest that has just been getting bigger and older through the centuries. 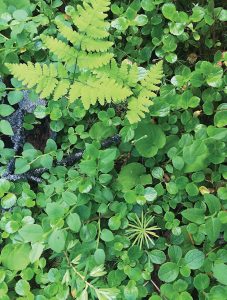 To walk through this old-growth cathedral is to hear the raspy buzz of a solitary hermit thrush at dusk and the cannonade of a pileated woodpecker drumming a giant snag, just 30 yards away, and the soft patter of the axe chips from his work. To see the paths the bears have worn with their soft paws, traveling the same contours, coming and going through the moss and rotting carcasses of fallen giants for centuries, the gnaw marks in the trunks, their clawed hieroglyphics in the old aspen. Giant spruce and hemlock grow next to giant old cottonwood next to ancient larch next to giant cedar: This is the Yaak. The steady pulse of rise and fall here is a kind of music, a magnificent orchestra that can be seen as well as heard and felt.

The incredible density of pileated woodpecker cavities in the many old snags: a forest of giants in all directions. The dignity of slow dying amidst the bright green buzz of such vigorous living, depending where sunlight falls, depending what giant loses its grip on this boggy floating forest and leans slowly down, allowing the new crop to rush upward. You can almost hear it, the engine of its genius.

But you’d have to hurry. The Kootenai National Forest is flagging and spray painting the perimeters of it, scheduling Unit 72 as part of a connected patch of nearly 1,000 acres of “regeneration harvest” — what we used to call clear-cuts. They’ve painted 20-foot-long fluorescent orange stripes on the bark of the giant cedars, the 600-year-old giant larch, and have already begun clearing with their axes and hatchets, despite the fact that they have not yet released the proposed sale for public comment, as is required by law. I would encourage you to write the Montana delegation. The Kootenai National Forest is acting as if laws no longer apply to them, if only they can operate far enough away from the public eye, way up on the Canadian border. They claim they have to erase the ancient forest, the ancient headwaters of our living water, in order to save it. 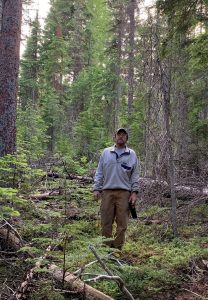 You can get a preview of what’s coming, unless it’s stopped, by viewing the unrepaired stumpage, the 200-foot-wide bulldozed roads cut through the living water of fens and marshes in this upper-elevation grotto that was created while fighting the Davis fire two years ago — 4,400 acres that burned deep in the wildest, most northern end of the Yaak, near the well-named Jungle Creek, before dying out, unable to burn the marshes that have extinguished all similar fires for many hundreds of years now.

We must not cut this forest. There are millions of acres of smaller overstocked trees growing close to people’s houses. We must shine a light quickly, brilliantly. Maybe we’ll learn something from the old forest — the ancient forest — about how to survive and sustain in hard times.

Every time the wind blows hard, a giant leans over, tips over slowly, it pulls up in the clutch of its root wad the signature of glacial moraine with a fountain of artesian Yaak mountain water rising into the new cavity, the new pool. And rushing into that slash of light — crazy for the light — comes a clamant swarm of twisted stalk, meadow rue, columbine, monkshood, mountain alder, Scouler’s willow, all rushing into the gash of light, as do bears, moose, elk, flying squirrels, the bestiary of the Yaak, surging shyly from the shadows into that small patch, that utterly wild and un-engineered opportunity for life.

This is the one place where only slow fire will go. A place where time, or humans’ scale and perception of it, has not yet reached. What’s the mad and greedy rush?