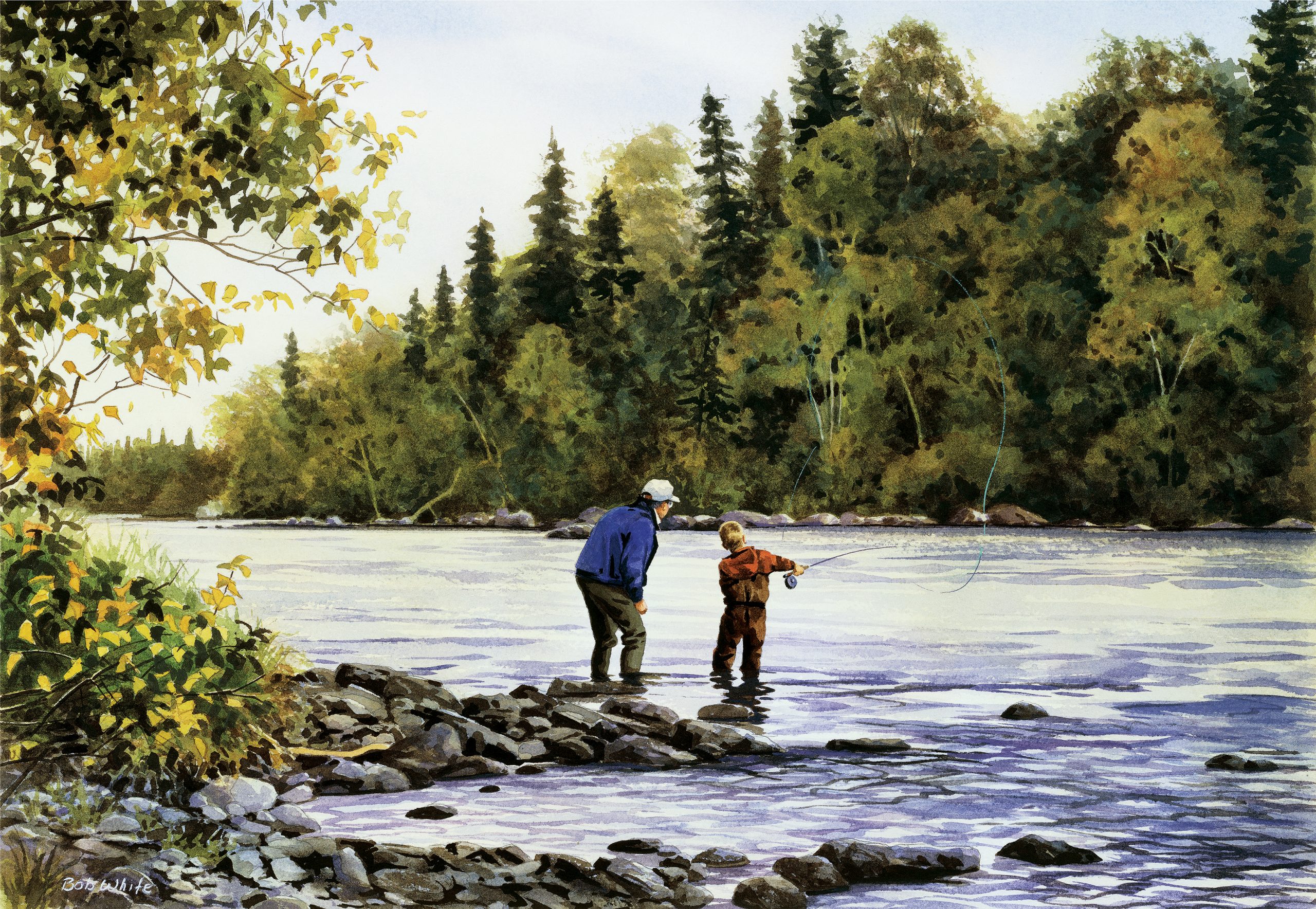 A passionate angler aims to revive the sport for her son

On the night before my son Jaren’s 18th birthday, I went online to buy him a fishing license. But I wondered if I would regret it. How annoyed would I be if he only used it once? Or more honestly, how disappointed?

Worst case, I’d be making a small donation to the management of fish and wildlife. And if the fish could state a preference, they’d probably rather we all stay home anyway, watching words and images flicker behind our tiny glass screens. But as I zipped the license into my sling pack, I couldn’t suppress a bubble of hope.

When our kids were younger, my husband and I often took them fishing in the nearby Bitterroot Mountains. They didn’t know fly fishing was supposed to be hard. It was simply a chance to play in the water with the whole family, including the dog. A fly rod was just another toy.

In late summer, when the creeks ran low, even the smallest pools were popping with hungry little trout. The boys learned to cast instinctively, almost casually. They chose their own flies and released their own fish, perhaps holding them a few seconds longer than the fish would have liked.

They learned how to read a stream and where to cross it. When they got tired, they hauled themselves out on the rocks and closed their eyes behind their polarized sunglasses.

They never learned how to tie on their own flies and tippet — annoying enough for adults, and a challenge for small fingers. Surely there would be time for that later.

But as Jaren grew older, he started a quiet rebellion. “I don’t really like fishing that much,” he said, adding that “hiking is kind of boring.” And one day, when we asked his little brother if he wanted to go fishing — the one who had beaten all my big-fish records before he grew a full set of teeth — he announced, “I’d rather die.”

They had dropped out of fishing.

Maybe my husband and I just liked it a little too much. I’ve learned, a bit late, that nothing turns off tweens or teens like parental enthusiasm — especially when the thing they want most is to not become their parents. When my husband retired from law enforcement and began working part-time as a fly-fishing guide, that was the end. Or so it seemed.

This past summer, I was making dinner one night when Jaren told me he wanted to go backpacking with friends from his track team. That was my first shock; backpacking involves hiking. Then I got my second.

“I thought we might, uh, fish,” he said, shifting from foot to foot. “Something to do at camp.”

“You? You want to fish?” I fought to maintain a neutral expression, but inside I was torn.

I don’t agree with those bumper stickers that say a bad day fishing beats a good day at work. But a good day fishing… at its end, you can feel as if all your ragged edges have been mended, that whatever was missing has been restored. I would like my kids to experience that feeling for themselves.

Yet all these years we could have been teaching him everything we knew, and now we were out of time. We’d be lucky to meet the minimum requirements. “You need a license,” I said. “And you need to learn two knots.”

Later, I tossed my fishing bag on our dining room table, made of soft pine that had been hand-distressed by toddler forks not all that many years ago. I showed Jaren how to make a clinch knot for attaching flies, and a figure-eight for making a loop-to-loop connection between the tippet and a braided leader. After he tied a couple, I decided to push my luck. “We probably should go fishing, just for practice,” I said.

He surprised me by saying, “OK.”

By the time we had a chance to go, my husband had left for Colorado on — what else? — a fishing trip. I asked my youngest if he wanted to join us, and he expressed himself as only a 14-year-old can: “I’m not stupid. No offense.”

I wanted us to have one of those perfect days, when you leave the trail and follow a creek for hours. But Jaren was rehabbing a leg injury, and I didn’t want to slow his recovery. We’d be fishing close to a heavily traveled route, hardly wading at all.

At the trailhead, I supervised while Jaren tied on a fly. Then, we headed up a canyon so familiar I sometimes had to remind myself it was beautiful. Cliffs loomed overhead, and white butterflies fluttered down from the evergreens. Fifty feet below us was the creek, edged with alder and cottonwood.

When the stream and the trail converged, we ducked through a patch of thimbleberry to reach the water. Jaren climbed down some rocks at the base of a ledge and started pulling out line. After I reminded him to watch his back cast, I moved away, feigning indifference.

Though years had passed since his last fishing trip, he still remembered how to cast, how to let the fly drift gently on the current. Within minutes, a fish plucked the fly from the surface and zinged away, pulling the rod into an arc. Jaren reeled in a small cutthroat hybrid.

He didn’t celebrate, just looked over his shoulder and said calmly, “I have accomplished my mission.”

“That’s it?” My bubble of hope deflated somewhat. “Let’s go a little further.”

He caught and released two more cutbows as we fished our way along the trail to a favorite spot of picnickers and plein air painters. At the base of a talus slope, an elephant-sized boulder jutted out into the stream, holding back a lovely pool on one side and a shallow puddle on the other. The pool spilled over a low waterfall and ran out under an arch of cottonwood branches.

Jaren started casting from a flat rock near the waterfall. I hovered for a moment, then left with my fly rod to explore upstream. When my toes grew numb, I picked my way back over the cobbles.

“I got bites,” Jaren said. He wasn’t smiling, but there was a hint of satisfaction in his voice.

I watched him for a few minutes. He’d probably need to work on casting if he wanted to fish the river. And he wasn’t all that solid with those two knots I’d shown him. But I remembered what he’d said about driving: He never really learned how until he drove alone.

A rock clicked behind me, and I looked around to see a young couple with a baby in a backpack, hesitating by the trail. The puddle behind the big boulder was one of the safer places to let a toddler play, as long as a parent stayed within arm’s reach, and as long as no hooks were flying through the air.

Jaren and I gathered our gear, and as we climbed the bank, I called out to the family over the sound of water, “It’s all yours.”