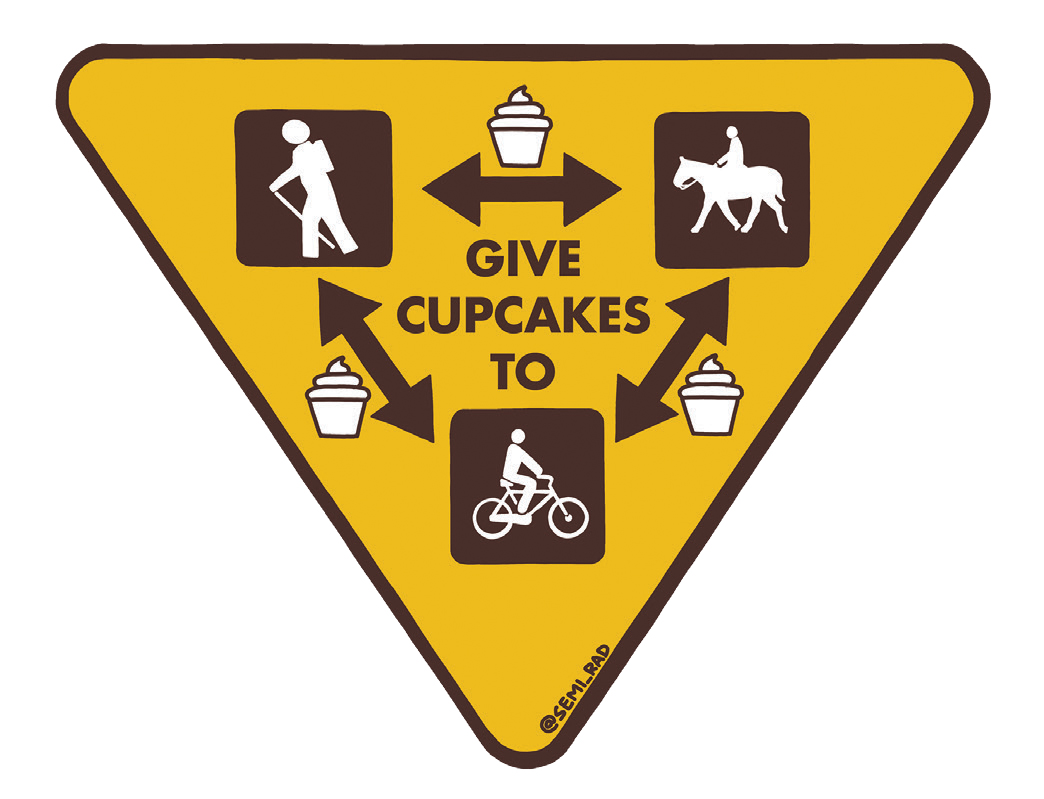 The summer trail season is here in Big Sky Country, and, whether you’re venturing out for your first time to walk on an unpaved surface or emerging from your winter hibernation cohabitating with some Yellowstone grizzlies you’ve managed to befriend, you could probably use a refresher in acceptable trail etiquette. Not everything in the outdoors is inherently obvious, and you may have questions about how to properly use America’s public lands. Questions like:

“Should I tip national park rangers $10 or $20 each time they answer one of my questions?” Answer: Your call.

“Do I have to use a hydration pack or can I just carry my water up the trail in a 5-gallon bucket?” Answer: You can carry any size bucket you’d like.

“What are some wild animals I could confidently take in a bar fight?” Answer: Generally animals smaller than a basketball, with the exception of rattlesnakes, badgers, porcupines, and a few others. Actually, you know what? Just play it safe and keep your distance.

In addition to answering those important questions, here are a few etiquette tips that will no doubt be useful to you this season.

Right of Way
Hikers coming uphill have the right of way. The proper thing to do as you’re hiking downhill and hikers approach is to give them some space to pass. As hikers pass you, it is generally acceptable to offer some encouragement, such as “You’re almost to the top,” “It’s just around the corner up there,” or “You’re obviously a self-motivated go-getter who deserves a higher salary at your current job, as well as more respect and way fewer meetings.” Do you happen to have a pan of cupcakes with you? Feel free to offer a cupcake to any or all passing hikers, mountain bikers, equestrians, or people who are riding another type of animal.

Right of Way, Continued
Grizzly bears — which are very capable of crushing your skull between their jaws and/or mortally wounding you with a single swipe of a claw — always have the right of way. Even if you have, perchance, beaten up a really big, really tough, really mean guy one time in a bar fight several years ago, if you are lucky enough to see a bear in the wild, the best thing to do is immediately f— off.

Doffing of Caps
Doffing one’s cap when encountering other trail users is optional.

Proper Clothing
You can wear whatever you want* on the trail, whether it’s a brand-new outfit of technical hiking clothing, jorts, a prom dress, a banana costume, or a full New York Jets uniform.

Bags of S*@$
Please take your plastic bag full of s— with you.

Cutting Switchbacks
Shortcutting trails causes erosion and is poor form, not to mention almost always paradoxically less efficient. The only time cutting switchbacks is allowed is when you have been given express permission by a Level 7 Wizard.

Smoking
Sure, smoking is cool, but you know what’s really cool? Not starting a forest fire.

Passing Other Trail Users
If you encounter another trail user who is moving more slowly than you, alert them to your presence by saying “on your left,” or “passing on your left,” or “I beg your pardon,” and, once they are aware of your need to pass, make your way around them and say “thank you” or “thanks” and hand them $10 or a Baskin-Robbins gift card.

The Rocks
The rocks are probably doing just fine right where they are, thanks. The forces of nature, which have had the primary responsibility of moving Earth’s rocks for several billion years, will move rocks at the right time.

Double and Triple Word Scores
When a blank tile is played on a pink or red square, the value of the word is doubled or tripled, respectively, even though the blank itself has no score value.

Sorry, Ignore that Last One
I guess that’s actually one of the rules of Scrabble, not trail usage.

Sitting
Whenever possible, try not to sit or lie down in the middle of, or across, the trail, unless you are near death, actually dying, or injured and need assistance in order to avoid death. If the trail you’re on goes through nature, there should be plenty of square footage and other options for sitting and/or lying down. When choosing a rock to sit on, examine the top surface of the rock and select something flat, that is close to parallel to the ground, and preferably lacking protrusions that point skyward (or buttward, as it were).

Brendan Leonard is an ultramarathon runner and the author of I Hate Running and You Can Too. His adventure writing career began at the University of Montana in 2002, and his work has appeared in Outside, Climbing, Runner’s World, National Geographic Adventure, and other publications. He lives in Missoula, Montana.