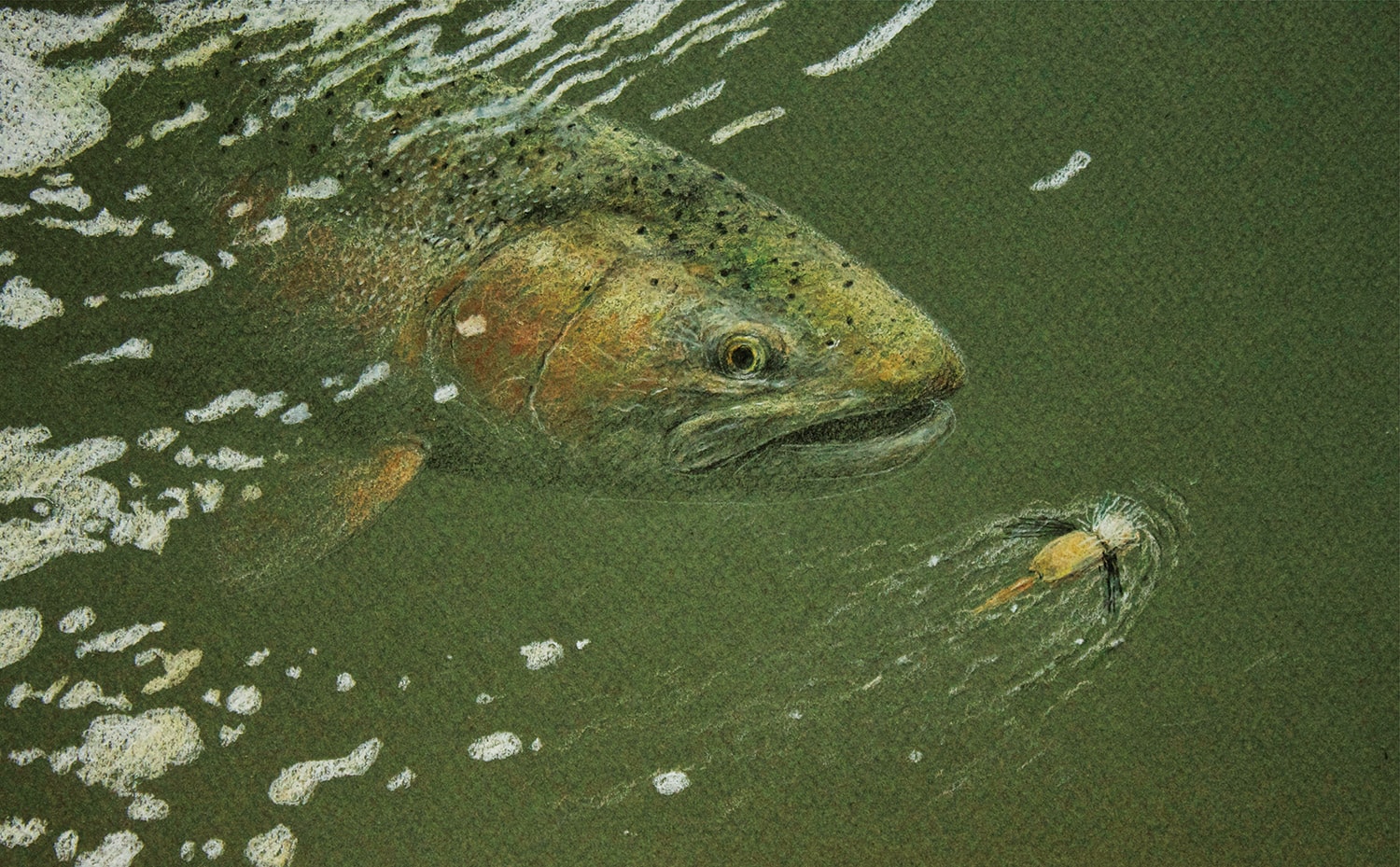 30 Nov Outside: Up Top for Steel

The first time I raised a steelhead to a skated fly, I nearly wet my waders.

That’s because I wasn’t really expecting a take, and when it happened I pulled the fly right out of a 15-pounder’s mouth. I didn’t get my hands on that fish, nor another that swirled on the fly a few minutes later, but I did grasp an idea that savvy steelheaders already understood: Those big, sea-run rainbow trout do rise for surface flies, but too few of us are willing to try them. That’s been the case for me whether fishing British Columbia’s Dean River, where the aforementioned scenario occurred, or on many of the Inland Northwest’s summer steelhead streams, such as Idaho’s Clearwater and Salmon rivers, and Oregon’s Deschutes. For some reason, I expect my best chances to arrive under the surface, and I am reluctant to fish anything but small, wet flies or gaudy, prawn-like streamers. I’ve even made that choice while staring at several steelhead resting below a bridge abutment in perfectly clear water that ran at a comfortable (for the fish) 50-some degrees. So why didn’t I skate a fly over those fish’s heads before I tied on a sink-tip and a general practitioner? Beats me.

Even in British Columbia, my fishing partner had to twist my arm to skate a fly. He said, “You’ve been talking about skating all week and this is the perfect run to do it.” He added, “If you skate a fly, I’ll let you go through the run first, even though it’s my turn. If you don’t, I’ll take it.”

In double-time I tied on a tan gurgler and waded in ahead of my friend. Halfway down the run, that massive fish rose, porpoising inches behind the fly. I recast several times but couldn’t draw another look. Then, at the tailout of the run, just above a set of rapids and in less than 20 inches of water, another big steelhead boiled on the fly, this time missing on its own.

I went back to camp that day and shared my experience with fellow anglers who were eager to tell me that I’d really blown it. I said, “Well, I doubt I’m the first guy to have ripped a fly out of a giant’s mouth.” One of the guys replied, “That’s not the problem. The problem is you didn’t immediately tie on a small, wet fly and swing it through the same spot. Ninety percent bet that fish would have eaten it.”

That was something I’d never read or heard, but each guy nodded in support of the prediction. Later, I went to the lodge manager and asked if he believed that theory.

He too nodded and said, “There’s a guy who’s fished the Dean for a few decades and he only skates flies. He won’t tie on a sink-tip or a weighted fly for anything. And he catches as many steelhead, if not more, than anybody. And he’s told me that a small wet, swung in front of a fish that’s just missed or refused a skater, always gets a grab.”

I processed that information and defiantly spent my last two days of the trip swinging bantams, GPs, and intruders off sink-tips, the gurglers firmly secured in my fly box, in their very own neat little row.

Since I fished the Dean, I’ve ask friends why they don’t skate flies for steelhead as often as they go underneath for them, and their answers are usually the same: They don’t know why, but just feel more confident when their flies are in the water rather than riding on top of it.

Even so, there are reasons the skated fly can, at times, be more effective than flies swinging under the surface. First, when a steelhead slashes at a wet fly and misses, an angler may never even know that a fish was near. When a fish turns on a skater, however, the angler might see a surface disturbance, even if he or she doesn’t actually see the fish.

This is key because steelhead don’t populate the large waters they prefer in nearly the numbers that trout occupy theirs. Even when fishing perfect steelhead water, an angler might be just as successful casting at air — because a fish might not even be there. However, if an angler sees a boil at their skated fly, they know, with certainty, they have found a fish and now they can work it.

I am a steelheader who’s prone to cover more ground than I should when fishing, and I was told that by David Moskowitz, who works at the Conservation Angler and has caught more Deschutes River steelhead than I can dream of.

When I returned to our riverside camp one day he asked, “Anything?” When I said, “Two,” he sat up and said, “Awesome. Did you get any other nips or pulls?”

I said, “Yeah, a couple. Could have been steelhead or something else.”

“What did you do when you felt the tug?” Moskowitz asked. He seemed disappointed when I said, “Oh I cast again and then moved on.”

“Did you change flies?” he asked.

“If I get a grab, I look to shore and mark where I’m standing,” he said. “I try to stay calm and make the same cast. If nothing happens, I’ll take a small step downstream and make another cast.

If nothing happens, I might move back upstream a step or even two steps and shorten the line 3 feet and make another cast. If the fish doesn’t take, I strip out more line and make a longer cast. “If nothing happens,” Moscowitz added, “I’ll consider changing flies. It’s really about working out a system so that when you find a steelhead you give yourself the best chance for success.”

When the whippin’ was over, I hung my hatchery steelhead in a tree, slunk over to the cooler, then rolled onto my cot with a Chainbreaker, wondering if I’d waded right by a four-fish day.

Even though the skated fly can be effective, especially for locating fish, it’s not the ideal choice at all times. In fact, common wisdom says steelhead won’t rise for skaters when the water dips below 45 degrees Fahrenheit. But some winter steelheaders who sneak around British Columbia’s most remote islands might contradict that (if you could get them to say anything at all). Know this: If the water is flowing in the 30-degree range, with ice chunks bobbing on the surface, the odds aren’t stacked in your favor. However, there have been times — even with the water in the 30s — that steelhead have crushed my wet fly the second it hit the water, before it had time to sink.

I’m not about to say that fishing a skated fly is the way to go all the time when chasing Northwest steelhead. But I do think we’re all missing out if we don’t occasionally extract a skater from that neat little neglected row in our fly boxes, and tie it to the end of our tippets. You can’t learn without trying, and I may have remained clueless if I hadn’t taken a gamble — and first dibs on a prime run — while fishing the Dean one day.