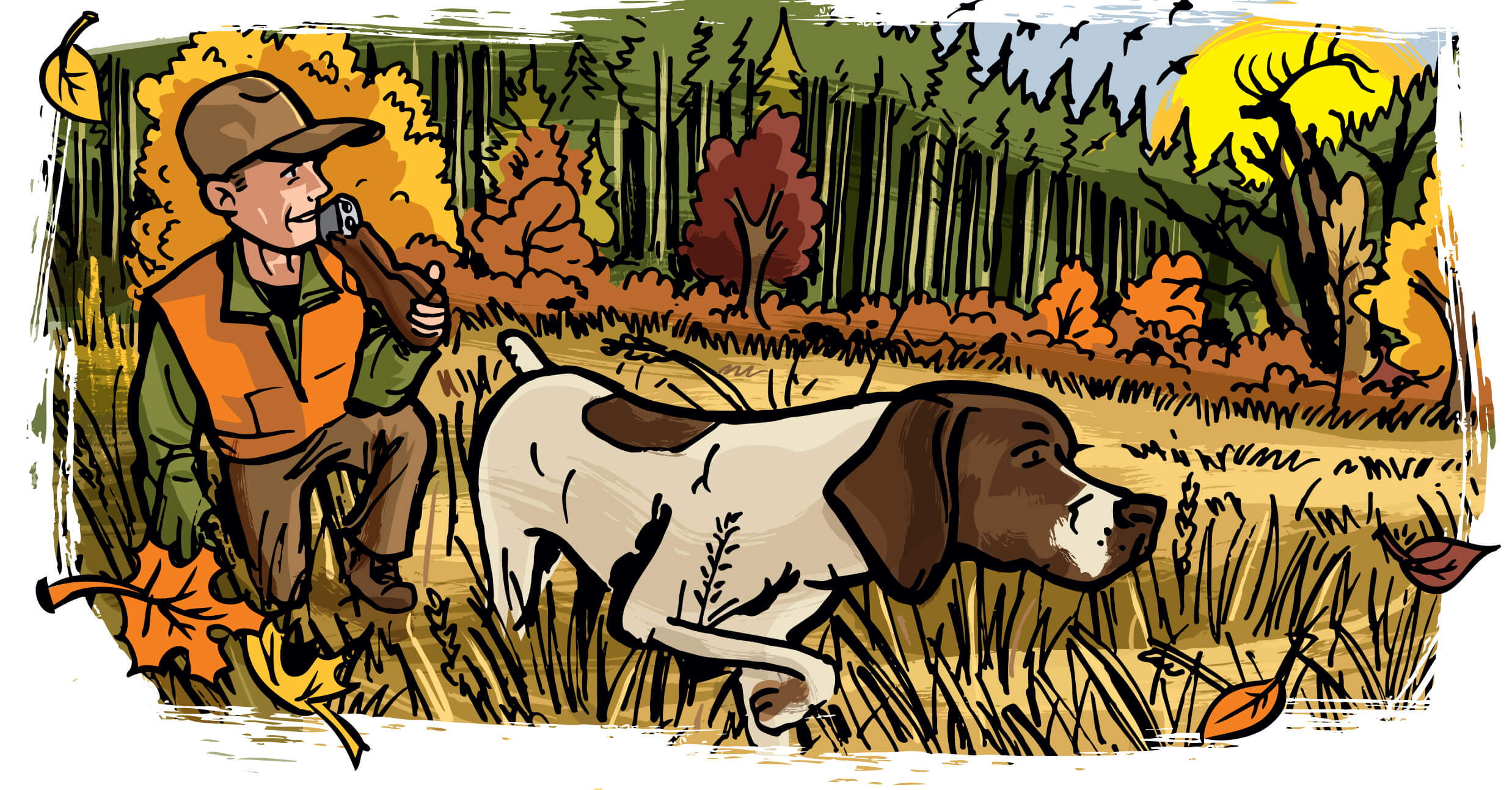 28 Sep Outside: The Mystery of the Elk Tree

Each time I’ve looked at this tree from the road, I’ve thought there might be an elk standing next to it. It’s an illusion of course. A smaller tree that was once bent by snow looks like an elk standing there. I walked up to it once in the early summer, making the long climb up the mountain to satisfy my curiosity. When I looked at the tree closely, though, the branches I’d mistook for antlers just didn’t look right; something was missing. It was a mystery for another day, and as I moved on from the tree, I took notice of the ground further up hill. There, I imagined grouse would live in the fall. The combination of sage, forbs, and large Douglas fir seemed right, but I’d always passed it by during hunting season, favoring my haunts further up the drainage.

This year, though, my honey holes were not as productive as years past. An occasional large bird would fly to the trees well in front of my new pup, who was figuring out how close he could get before the bird flew. While I never got close enough to them to get a shot, I enjoyed the crisp fall mornings and changing colors. We’d make the climb up the slopes, the dog running joyfully ahead while I lumbered behind, lugging my vest full of snacks and water for both of us.

After several outings where we’d managed to see just one bird, I decided it was time to try something new and, as we passed the elk tree, I stopped and looked again at the shape I’d seen so many times before. I parked the truck, unloaded the dog, and we made our way up the steep slope to the tree. Following a few minutes’ rest, while the dog anxiously ran back and forth and I caught my breath, we made the long steep climb further up the hill.

I saw the dog go on point in an open brush field 75 yards in front of me, and I wondered if there was a bird or if it was a mouse or vole that had sparked his interest. I worked my way up to him and a young dusky grouse flew up about 30 yards away. The pup ran to the spot and raced around the field; more grouse flew as a family group headed for the trees. I counted eight birds in this group, the largest covey I’d seen this year.

The pup finally came back to me with that wild-eyed look that happens when a lot of birds get up at one time. Up the hill was another quarter-mile of decent habitat and it was a nice morning for a walk. After a snack and some water, we continued the climb.

By then, the pup was slowing down following his initial burst of energy. I was already slow, the adrenaline rush from the flush of birds now in the past. As we worked our way upslope, I saw the dog go on point again, this time close to a group of large firs. I figured that he’d probably flush the bird before I got there, but he remained remarkably steady. As I reached him, a small hawk flushed from his meal and sailed off into the trees. I made my way to where the dog was trying to eat what was left of the hawk’s vole. I shook my head, got the dog pulled away, and gave us both some water.

There was good habitat at the top of the ridge, so we climbed toward the morning sun that was just coming over the crest. As we reached the ridge, the dog again went on point, and I wondered what might be waiting in front of him. He stayed steady, and as I worked around him a young grouse flushed from the ground; I made a lucky shot and watched it go down. The dog raced to the bird and stood there, not really sure how to pick up something that was twice the size of the feral pigeons and chukars with which he’d been trained. He finally grabbed the bird by the wing and alternately dragged and carried the bird close to me. I put it in his mouth and gave him lots of praise for a job well done, then removed the bird, put it in my vest, and gave us both more water.

As I looked downhill, I could see the elk tree, but it didn’t look quite right from this angle. I walked to my left toward some smaller brush to line up where I thought my truck was parked and realized that the view I’d seen from the road was not just the elk tree but that a slightly larger tree provided the antlers in the background. Mystery solved.

Upslope, the dog was hunting and the sun was now above the trees; downslope, the fall colors were just starting to show after a few morning frosts earlier in the week. The views out to the valley and north to the Big Belts were spectacular. Should we keep hunting, or work our way back to the truck? Things seemed perfect as they were. Sometimes, one bird is enough.

Jeff Kershner is a former biologist and now spends his spare time writing about dog training and the outdoors. He and his wife, Nancy, live in southwest Montana, where they raise and train Braque Francais dogs, one of the oldest hunting dog breeds in the world.