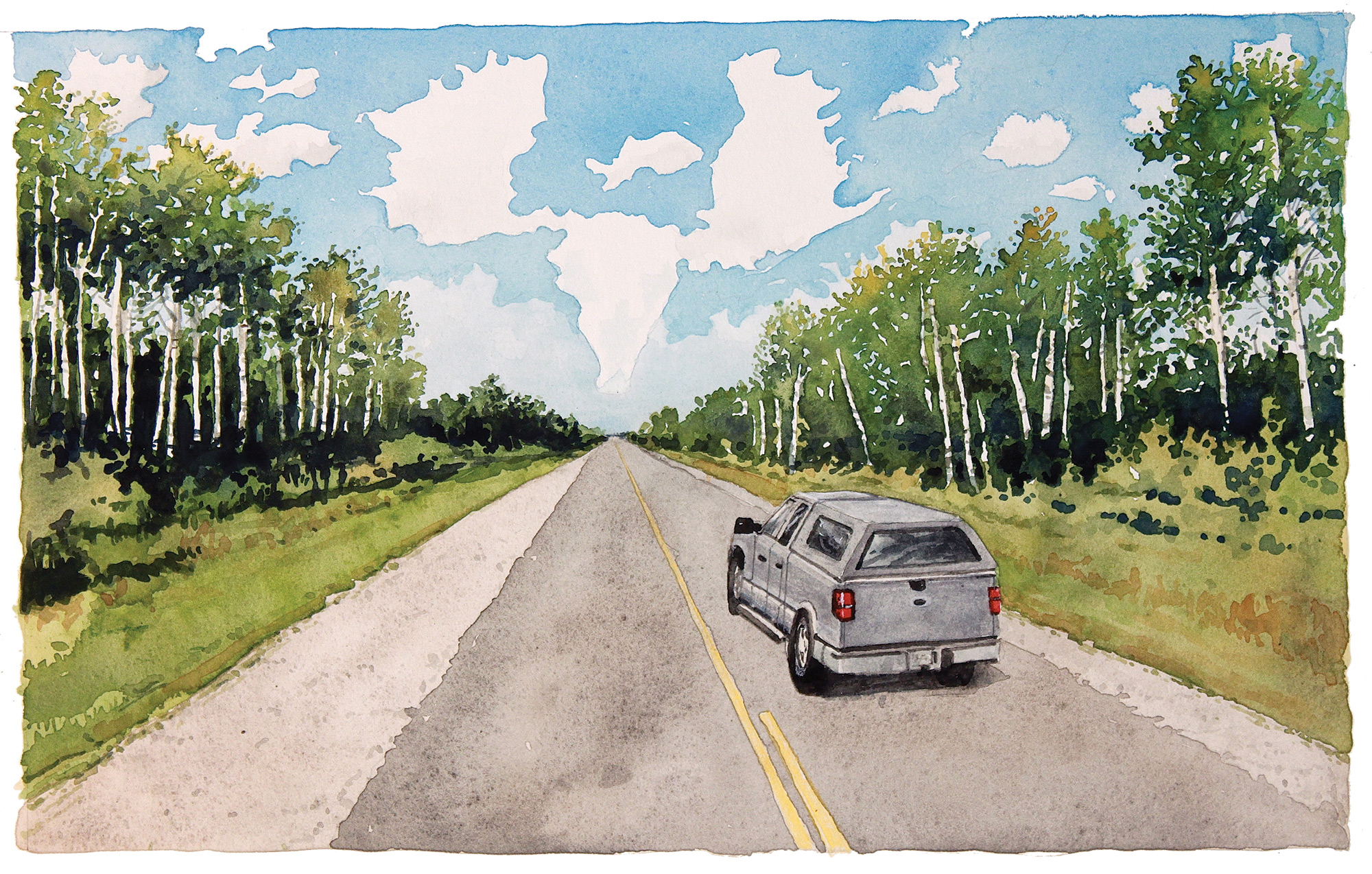 02 Oct Outside: The Hunter’s Dilemma

in Fall 2015 | Outside | Written by Greg Thomas | Illustrated by Fred Thomas Posted at 23:04h 0 Comments
Share

Any seasoned outdoorsman can tell you that getting there and back is half the fun. But at 5 a.m. on Thursday, Sept. 11, I was feeling anything but eager to climb into an F-150 pickup truck and point its grill east.

That’s because what lay ahead was unlike anything I’d ever undertaken — in 48 hours I needed to cross most of Montana, the breadth of North Dakota, an international border (with firearms) and three-quarters of Manitoba to catch a flight to a moose hunting camp located just southeast of the Northwest Territories.

To catch that plane meant I’d cover 1,700 miles, alone, navigating with major-league blurred vision in my right eye and only a single spare tire in tow. To make matters worse, Sept. 11 would provide the season’s first snow and, according to the radio, there was already 3 inches on the ground in Butte with more of the white stuff falling.

The craziest thing about this expedition was I had tickets to fly to Thompson, Manitoba, via Missoula, Denver and Winnipeg, but had canceled those last-minute because I visualized myself on the return trip trying to get through four airports with 600 pounds of moose meat, a 100-plus pound moose hide, a moose skull and antlers, plus my rifle and the rest of my hunting gear, a glut of fishing gear and my photography gear, all with connections as short as 40 minutes. I’d deemed that task impossible and decided to load all the gear, including five large coolers, into the back of my truck and haul for the boreal forest.

It all goes well until I hit the North Dakota border and call my father, Fred. He is an artist by trade but is now serving as my personal navigator, telling me where I need to stop for gas, which exit that requires, and so on. I need that help because my right eye has deteriorated to the point that I can’t really read a map or my iPhone Maps program or even small highway signs. Already a little weary after a nine-and-a-half hour drive, I speak with Fred, who assures me I can make it to Bismarck in a couple of hours.

“That’s great,” I say. “My eye is killing me and I’m ready to be done for the day … Fargo is an hour beyond Bismarck, right?”

Fred pauses and says, “Well, no, it’s farther than that. In fact you’re probably looking at an additional three hours to Fargo and then another hour-and-a-half to Grand Forks where you want to leave from in the morning.”

Fortunately, I’m finding North Dakota to be surprisingly beautiful and I say “surprisingly” because of the jokes that fellow Montanans have told me over the years. You know those jokes: What is the official state tree of North Dakota? A telephone pole. How did the North Dakotan die from drinking milk? The cow fell on him. A North Dakotan’s definition of summer is “bad sledding.” I could go on, which might make you lament a drive through the “Legendary” state, but that would be a disservice because you’d miss out on seeing the gorgeous, brilliant green Great Plains and the insanely beautiful pastel hills and canyons that comprise North Dakota’s badlands. As I pass through this landscape, I imagine a day when I will return to mountain bike or hike and to fish any secret streams that might exist beyond the horizon.

Then, many miles and hours later, just before Grand Forks, wiped out and nearly blind, I wonder why North Dakota, which leads the nation in almost every prosperity indicator, is the brunt of so many jokes. Just to the west, Montana can’t even keep its homegrown graduates at home.

Then I decide: It’s the signs. Across the state, North Dakota promotes its outsized art: the world’s largest sandhill crane, a 40-footer that weighs 4.5 tons; the world’s largest metal sculpture, which depicts geese in flight, stands 110 feet tall and weighs 78 tons; Salem Sue, a 38-foot-high Holstein cow; and one at Jamestown that touts the world’s largest buffalo, a beast that stands 26 feet high, stretches 26 feet long and weighs 60 tons. Scattered across North Dakota, these “sculptures,” I figure, were created during long winters by people who don’t ice fish or play hockey.

The following morning when I pull up to the Canadian customs booth, the border agent asks, “What’s your purpose in Canada?”

He says, “Where are you driving from and where’s your destination?”

“I’m from Missoula, Montana, and I’m driving to Thompson, Manitoba,” I reply.

He peers past me, sees the empty passenger seat and says, “Where’s the other guy?”

“Nobody in the back seat?” he reiterates.

I raise my eyebrows, quickly shake my head and say, “Nobody.”

He coughs out a little laugh, shakes his head, stamps my passport and says, “Driving from Missoula to Thompson by yourself is crazy. You’re crazy.”

Getting to Thompson requires this navigation: Turn left at Winnipeg onto the Winnipeg bypass; another left onto Highway 6 near Grosse Isle; follow that super-straight, birch-lined, pothole-riddled path north for eight and a half hours to Thompson, which touts itself, accurately, as the Gateway to the North. Along Highway 6 gas stations are infrequent, they lack 24-hour service and credit card technology. I’ve been advised to stop and fill up at each because there is no guarantee that the next station down the road would be open.

A case could be made, as it often is for North Dakota, that driving through Manitoba is a boring experience. But I love landscape and wildlife and rural architecture. I see a wealth of it on Highway 6, including waves of Canada geese outside Winnipeg that seem, at times, to diffuse the sun. (Note to self: Come back next fall to hunt waterfowl.) I see black bears and eagles, whitetail deer and coyotes. And I see big lakes, small lakes and numerous rivers that all scream, “Big fish right here!”

I make Thompson unscathed, with all tires intact. And I reach Gangler’s North Seal River hunting camp in time, where, after three days, I shoot a beautiful bull moose. In fact, everything is rosy until my flight returns from the lodge to Thompson and I end up in a bit of a quandary. The eight caribou hunters who have flown with me from Gangler’s need to collect their meat from the other side of the airport, which requires a mile-plus drive. They don’t have enough time to hail cabs before their flight departs. I approach and say, “Guys, I have to get my moose meat and antlers from the same place and I can take three of you over there and back … How much meat do you guys have?”

One of the men replies, “Eight boxes.”

Somehow eight boxes turn into many more boxes, and when we return to the terminal the hunters face a dilemma: The airline can’t handle the additional meat. The plane is on the tarmac ready to take off; there is no time to argue. Things I hear during the discussion include: “We have to get on the plane now!” “They won’t take more than eight boxes!” “I don’t know what to do with the meat!” “You said we had eight boxes!” “If we abandon this meat we’ll never be allowed to hunt in Canada again!” “The plane is going to take off without us!”

I gather their licenses and signatures, and with some quick shuffling we make room for the meat. Ten minutes later I am driving out of Thompson, headed for home.

This is great except for two problems: The temperature is in the mid-60s, and I don’t have enough coolers for all that meat; also, because there is so much weight in the back of my half-ton truck, its headlights angle high and seem to blind oncoming drivers. I guess this because the other drivers I encounter wait until they are almost even with me, and then drill my eyes with their high beams.

I’ve traveled to Canada often during the past few years and I’ve noticed a few generalities: Canadians tell great jokes; they’re gluttons for poutine; they are overly generous; they consider hockey to be a religion; even the women practice calling moose; and they treat their neighbors like family … unless they are driving, in which case even a neighbor is an enemy.

Several hours outside Thompson, after dark and somewhere between the town of The Pas and Overflowing River Park, a great tragedy occurs. It’s a frog migration unlike anything I have ever seen. Something in the air, probably the unseasonably warm temperature, told those amphibians to cross from one side of the road to other. I try to avoid them but I’m not exactly driving a sports car; all that weight in the back of the truck makes it bounce over frost heaves and potholes, and swerving to avoid a bullfrog is just out of the question. When I pull into a farmer’s field somewhere outside Boggy Creek, I figure I’d just massacred 500 creatures. I’d like to say that’s why sleep doesn’t come easy, but the backseat of my truck wasn’t built for comfort and probably has as much to do with a restless two hours as does my conscience.

By 5:30 a.m. I am on the road again, with the temperature still north of 50 degrees. Now I am truly in a race against time, trying to make it to Missoula before the meat spoils. At Wal-Mart in Regina, Saskatchewan, I buy two more coolers, rearrange the meat, hide and antlers. When I finish, I have a neatly packed truck with most of the meat in coolers. To play it safe, I pack 38 bags of ice around the rest of the meat, the head and the hide, and then cover all of it tightly with a blue tarp. I can say this with certainty: If you’re starving for attention, wear blood-speckled jeans into a Wal-Mart and order 38 bags of ice.

When I cross the border into Montana the temperature is 80 degrees and I still have 10 hours to go. By the time I hit Great Falls, there is a steady stream of reddish water rolling out the back of my truck. But when I pull up to my house in Missoula, having driven exactly 2,990 miles by myself, the last half of that in 29 hours, I feel real fine. I open the canopy lid, show neighbors my haul and enlist them to help me carry moose meat to the freezer.

A week later, after loading a new freezer with all the processed and packaged meat, enough protein to support my girls and me for the next three years, I am a proud man. But after checking my finances and tallying receipts from the trip, I have a nagging question in my head with an answer I really don’t want to know: How many ribeyes could I have bought at Costco for what I paid in cash and time to kill a moose in Manitoba?

There’s a saying in hunting: Never do the math. It’s best to just focus on the experience. And I think that’s what I’ll do. I got an experience, a great big experience, something I’ll probably never do again, but something, including that massive drive, that I’ll never forget.