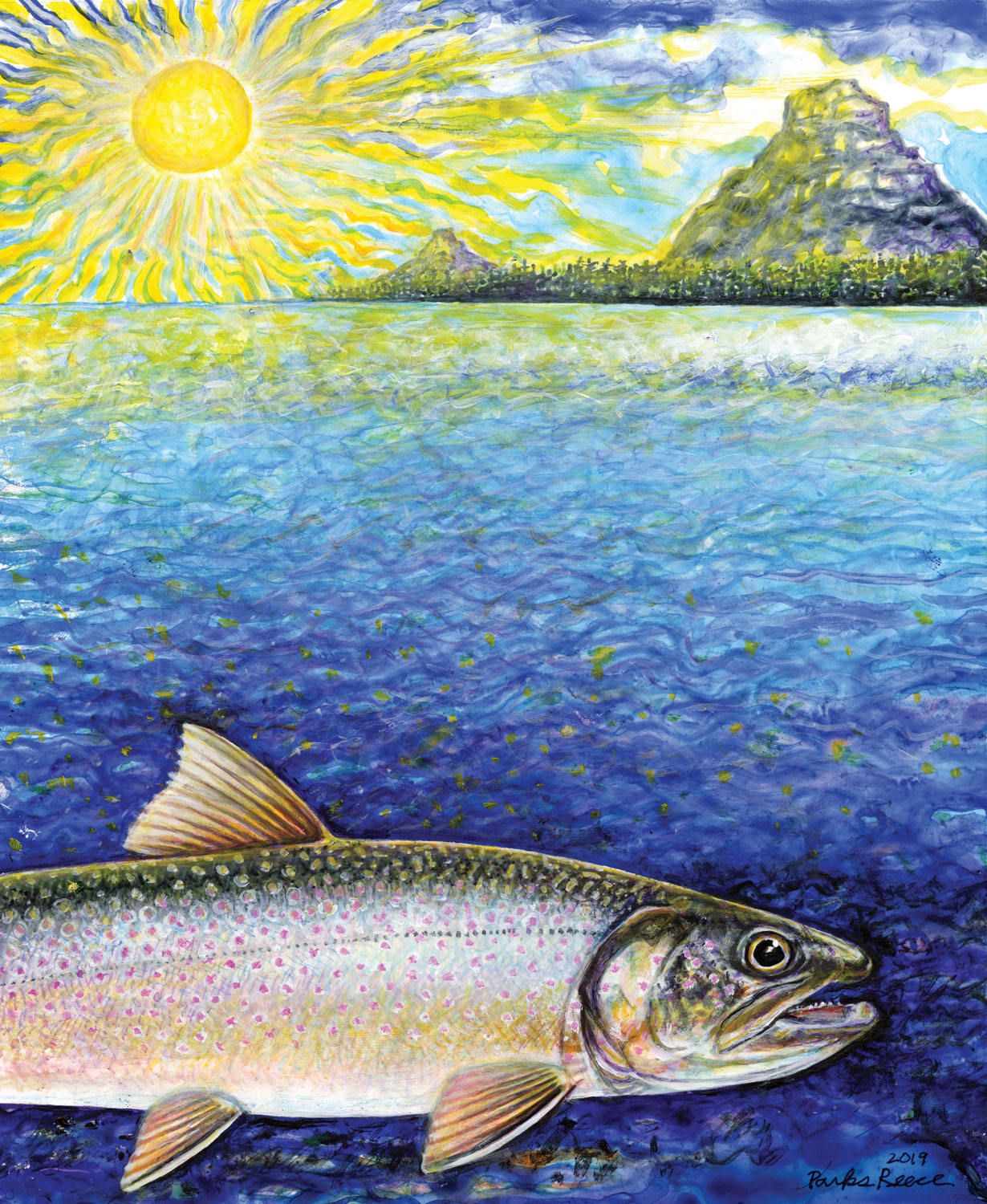 12 Aug Outside: Swimming Against Time

It’s hard to get people fired up about chunks of ice, but that’s what scientists and officials in Glacier National Park are trying to do as the park’s namesake glaciers melt away. They face a tougher sell than folks who can broadcast, say, images of polar bears swimming across vast expanses of open water because the sea ice is disappearing.

The paddling polar bear video tugs at our animal-loving heartstrings. Before-and-after photos of disappearing glaciers don’t evoke the same visceral emotions among the general public. But they should, and for some people — especially those who live in the park’s backyard or visit it on vacations — they do. We’re losing our landscape; we’re losing a part of ourselves. That matters.

It also matters, emphatically, to the surrounding wildlife already facing a host of pressures from human activities and the broader impacts of climate change. This includes many that are harder to measure than glacial recession, which offers a visible microcosm of the warming world at large. Climate scientist Dan Fagre says the park’s glaciers “act like a checking account for the climate.” That would make Fagre their scrupulous accountant, because he’s been studying the park’s glaciers for three decades, producing an extensive body of research.

Scientists estimate that the park had roughly 150 glaciers when it was established in 1910. Today, only 25 remain large enough to meet the criterium of at least 25 acres. Fagre predicts they will all likely be gone by 2030, a bleak checking account indeed.

Fagre may be the melting glaciers’ best human spokesperson, but perhaps they need an equivalent of the ice caps’ polar bears: a wild face, a mascot, a living and relatable embodiment of the consequences of their disappearance. Grizzlies, which roam the region in large numbers, are worthy candidates. The cute little pika would also be a fine spokesanimal, a wordless press secretary to help clarify the glacial-recession message for the masses. There are many good options, but as an angler, I look to the water. And there, I find a face only a fisherman could love: a bull trout.

It’s not a face that appeals to everybody. Those tooth-lined fishy lips aren’t exactly kissable. But bull trout carry a mystique, an air of sacred elusiveness. The threatened species are native to Montana, and they fight like hell on a fly rod.

For a fly fisherman, bull trout are at once a forbidden fruit and an occasional fortunate accident. Except for certain areas with a special permit, anglers in Northwest Montana are prohibited from intentionally pursuing bull trout. It’s a hard law to enforce, but if game wardens see someone around here chucking a rodent-sized fly with an 8-weight rod into the river depths, they can safely surmise that bull trout are the desired quarry.

Bull trout, like brook trout, are actually char, a different member of the Salmonidae family than their trout cousins. They were once abundant throughout the Western U.S. and Canada, from Northern Nevada into Alberta and British Columbia. They are now highly diminished throughout their original range and have been extirpated from California. Fisheries managers in Northwest Montana have worked hard in recent years to prevent that area’s population from vanishing also. The efforts haven’t come without controversy, however, as saving native species often means killing rainbow and lake trout, among others.

Bull trout and westslope cutthroat trout, the two native salmonids at the heart of Northwest Montana resuscitation efforts, both need cold, clean water to thrive. Bull trout are especially sensitive to even the slightest increase in water temperature or impacts to its environment. They spawn in tributaries, often small streams, providing lucky observers a glimpse of giant fish clogging up tiny waterways. But humans have severely degraded many of those streams over the decades.

The factors contributing to this sensitive species’ decline are numerous, and include logging, overfishing, competition from and hybridization with introduced species, dams, and other human inflictions. Climate change hovers over their murky future, with longer, hotter summers and warmer waters, and glacial recession exacerbating the grim outlook.

For glaciers to persist for thousands of years, as those in the park have, they historically accumulated more snow in the winter than they shed in the warmer months. In the last century, however, that cycle has been flipped on its head as the climate warms, causing the snow and ice masses to shrink and, in many cases, vanish altogether.

Alpine glaciers across the globe, including those throughout the Alps and Himalayas, are essential to river basins and communities, as the annual melt-off feeds streams and aquifers, playing a significant role in runoff patterns and providing water reserves that are critical for drinking, recreation, agriculture, hydroelectricity, and wildlife. That’s why, although the vast majority of the world’s glacial mass is the continental variety near the poles, alpine glaciers often impact people most directly, as does their disappearance. In Ladakh, India, a region bordered by the Himalayas, villages depend on glacial runoff for water, and in recent years engineers have been constructing artificial glaciers to supply stable water sources through the summer.

Northwest Montana glaciers aren’t as essential for agriculture and drinking water as those in the Himalayas, but they do impact recreation and have unquantifiable value to millions of tourists visiting the park each year. And, most vitally, they have far-reaching implications for ecosystems: Bull trout feel the heat acutely.

Fly fishermen in the region often have a bull trout story or three, many involving them reeling in a trout only to have a massive bull emerge from the depths to devour the hooked fish. My personal favorite memory stems from an exploratory trip several autumns ago to a stream I had never fished, when — within my first five casts — I caught two bull trout that were well over 20 inches. The odds of that happening, particularly with small nymphs on an unfamiliar river, are extremely low. Still, I was emboldened with the belief that I had discovered a hidden oasis brimming with large bull trout around every bend.

Of course, I haven’t caught another one there since. Given the species’ aura, rooted in harsh ecological realities and cultivated in my fish-story mind, it’s fitting that such a magical moment was fleeting. As glaciers disappear, these incredible river-dwellers are hanging in the balance. I cherish their presence in my memories, but they can’t only live there. They are feverishly swimming in a race against time.