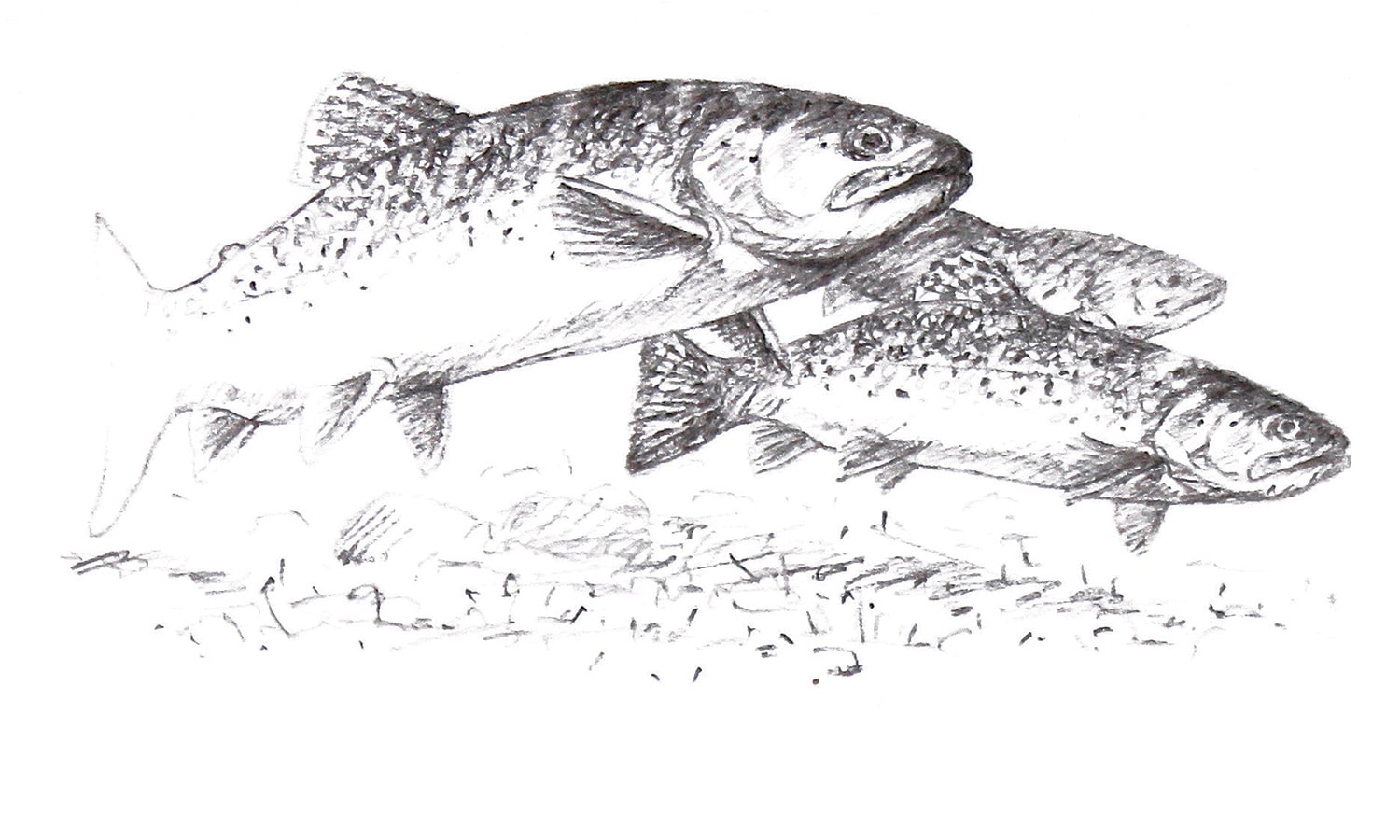 I used to fish the Blackfoot Indian Reservation and its array of prairie lakes every spring, just as the ice came off the surface of those waters and wads of giant rainbows cruised their shorelines.

This was a targeted hunt for one giant fish — something stretching past 30 inches — but my efforts often paid off in numbers, too. On a good day I might land four or five nice fish, but on the best I could lose count. That happened one day on Duck Lake — which is well known for big rainbows — when the entire bottom of a small bay seemed to move. That dark shadow, of course, was a school of fish numbering in the hundreds. They’d amassed and found no reason to leave, so two friends joined me and we cast at them for hours. When the onslaught ended, we’d beached and released more than 50 rainbows, none smaller than 20-some inches, with several exceeding the 30-inch mark.

It’s not always like that; spring weather is unpredictable, and standing waist-deep in semi-frozen water, with wind battering your face, and windchill rendering your fingers nearly useless, doesn’t equate to long hours on the water and it isn’t for everyone. Of course, the same could be said, in general, for lake fishing — most people prefer to fish moving waters, partly because rivers and streams offer all sorts of “trouty” looking spots to target with their casts, whereas a lake looks uniform and mysterious. When approaching a lake for the first time, a fledgling stillwater angler might wonder, Where should I even begin?

That challenge subsides if fish are rising. But when you can’t see those telltale rings, the fish could be anywhere. And often they are. One day, or even during certain hours of a day, they may cruise just under the surface picking off aquatic insects. Other times they may sit within a couple of feet of bottom, down 25 feet, enjoying cool water. At either extreme, if you aren’t in them, you aren’t catching, and a lake may seem barren and boring.

However, during spring — as early as late February and as late as early May — it’s almost guaranteed you’ll see trout cruising the shorelines, hunting for insects, crustaceans, and baitfish, or looking for gravelly areas in which to spawn. Typically, these fish are within casting range so you don’t need a boat or float-tube to reach them, although having the option of using watercraft is always a bonus.

Even when you see fish cruising in relatively shallow water, it’s not a sure bet you can catch them. Last year I watched dozens of big rainbows cruising Browns Lake, which is located east of Missoula, but they had nothing to do with anything I tossed their way. I tried small midges under a bobber; I threw beadhead leeches and Seal Buggers; I tried scuds and San Juan worms, pheasant-tail nymphs and egg patterns. Nada. They didn’t even look at my offerings.

This sometimes happens during the late spring, when fish have turned off the feed mode in their brains and only have spawning on their minds. During these times, they ignore most offerings and simply chase each other up and down the banks, the males nipping at each other while the females try to get away. At some point, casting at these fish may feel more like harassment than a true sporting experience, and when that happens, anglers usually climb into their rigs, fire up the heat, and say, “Next year we’ll be here two weeks earlier.”

Sometimes, however, it’s not about the spawn. Sometimes it is about the fly, as a friend of mine learned one day when fishing Kipp Lake on the Blackfeet Reservation. He’d thrown almost everything in his fly box and hadn’t hooked a fish. But up the bank, a local angler was killing them. When that angler finally climbed into his truck and started around the lake, my friend did the natural thing — he raced over to that spot and claimed it as his own. When he looked down, though, he saw the departing angler’s wooden net. He waved his arms and held up the net and sure enough, the angler saw him. He turned around, drove back to my friend, gathered his net, said, “Thanks,” and started to drive away. He stopped 15 yards later, rolled down his window, turned to my friend, said “Orange scud,” then drove away. My friend tied on an orange scud and proceeded to slay.

In recent years, I’ve fished a large private lake along the Rocky Mountain Front, and my favorite time to do so is during spring, late March and early April to be exact. Not long after the ice comes off, large Kamloops rainbow trout cruise the shores and, on windless days, you can see them on the shallow flats, 20 yards out. Unfortunately, windless days are infrequent on the Front, and chop — if not full-on rolling waves — is often present. That means the fish must swim close, sometimes just yards away from your rod tip, in order to be seen.

When fishing in the wind you have two choices: Either fish a scud or a leech blind under a bobber, or wait until you actually see fish and cast a pattern in front of them. Both tactics work well so you’re never out of the game, even when the weather gets testy.

I was doing just that two seasons ago, in a steady wind, trying to see through the chop and cast my fly further than 20 feet, when the blow suddenly died. The water settled and turned to glass. And then the fish arrived every few minutes, sometimes in pairs, often just as singles, all hungry and aggressive. All I had to do was cast a few yards in front of them, allow the fly to drop to the bottom, and then barely move it when it was in their sight. They’d race to the fly, pause momentarily, then slam their noses against the bottom — just like bonefish on saltwater flats — to inhale the fly. These fish ranged in size from 4 to 10 pounds, measured 22 to 26 inches long, and they took off like rockets when hooked.

I caught several before the afternoon wind kicked in. As I loaded gear into my truck and turned the heat dial to a mega-fire setting, I wondered how many anglers went fishing on Montana’s rivers that day, and how many caught a trout over 20 inches in the past week, the past month, the past year or two.

As I drove away, I guessed that some went fishless and most wouldn’t catch a 20-inch trout all season. And that, I mused, is the thing about fishing lakes during spring: I like to fish moving water as much as anyone, and I can become frustrated with lakes when the fish just won’t eat. But on the other hand, lakes almost guarantee a great start to the season on big fish that you’ll never see in a river; plus, lakes often are barren of anglers, and even when they are hit hard you can always find a patch of shore or a small bay away from the crowds. That’s something we often can’t say when fishing Montana’s popular rivers, and that’s why fishing lakes during spring is always at the top of my yearly hit list.