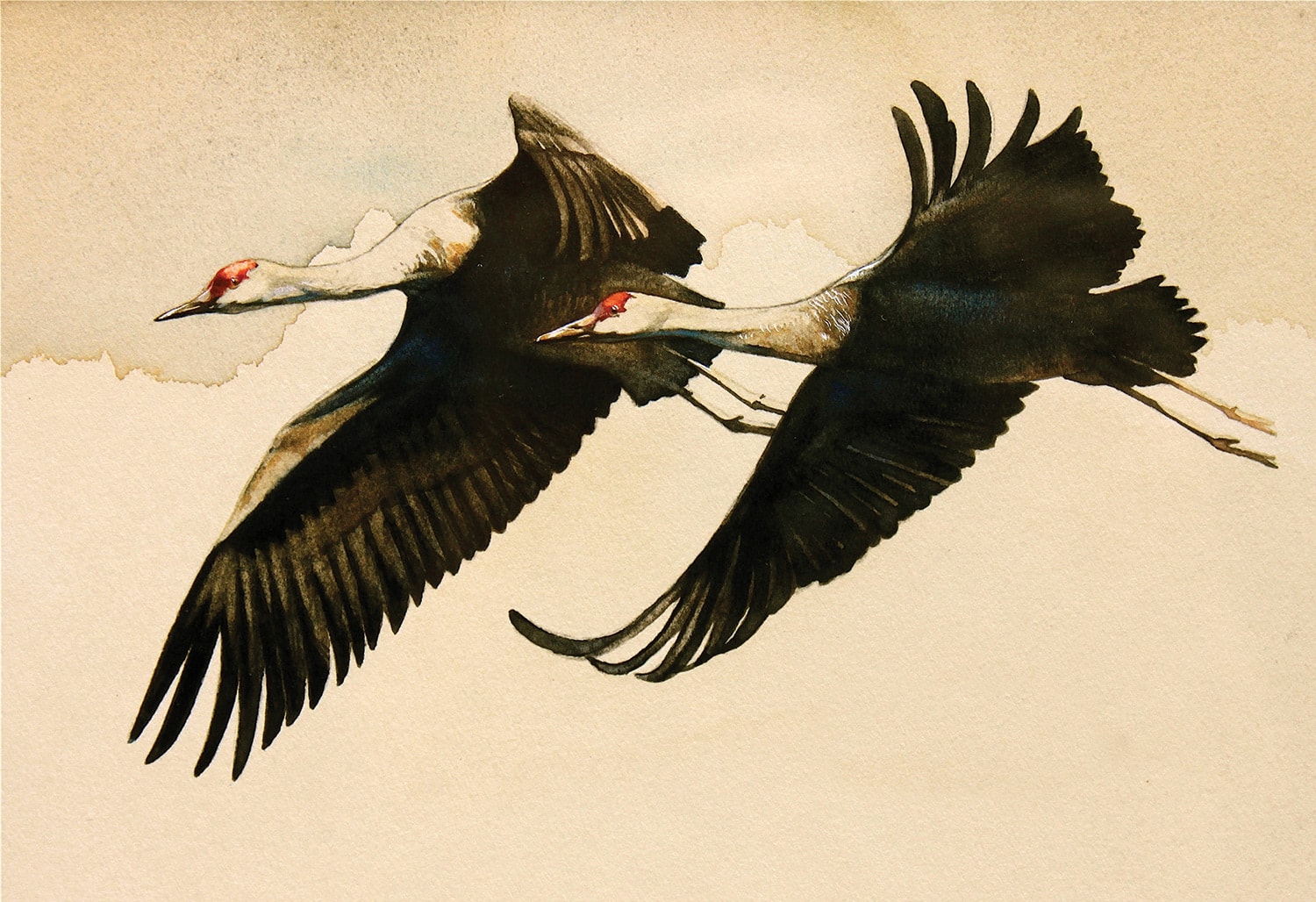 12 Aug Outside: Sandhills on the Rocky Mountain Front

The first sandhill crane I saw close up was mounted in the corner of an old hotel in Jackson, Wyoming, the top of its head and its back covered in dust, and the skin on its legs peeling off, as if some ornery, 40-pound housecat had used it as a scratching pad.

As dilapidated as it appeared, there was something about that bird that demanded respect; it was nearly 5 feet tall, and I could picture its thin, 10-inch-long, black beak suddenly stabbing into an eyeball. I also pictured this bird chasing me across an open field on its long legs, unfolding its enormous wings, which may spread 6 feet wide, and launching into the air before stabbing that beak right between my shoulder blades. I’ve always had a big imagination — it didn’t help that this first encounter took place right after “Jurassic Park” arrived in theaters.

My fascination with this bird hasn’t wavered. In fact, each year I know that spring has arrived when I see or hear the first sandhill cranes of the season. In Montana, they arrive in April and hang around into early fall before flying south.

While living in Montana, these birds often are seen in open fields, along the edges of streams, and close to marshes, hunting all sorts of critters including frogs, mice, snakes, and insects — prey that, if given the ability to speak, would argue that the age of dinosaurs never ended.

My dad, Fred, momentarily held the same opinion one spring while driving south of Ennis in Montana’s Madison Valley. He spotted several gangly looking adolescents that were “all legs and beak,” with only partially developed plumage. He likened them to velociraptors until he saw the adults standing guard nearby — sandhills.

I’ve seen these birds in a variety of habitats, but most frequently in the marshy, deep green bottomlands in the Madison Valley, and in the same habitat northeast of Missoula off the Blackfoot River near Potomac.

This spring I decided to search for these birds farther away, along the magnificent Rocky Mountain Front, where the mountains loaf into sharp canyons and rolling foothills that soon turn into the Great Plains. One of the areas fitting that description is Bean Lake, which sits next to the Dearborn River in nearly treeless terrain. What the area lacks in tall vegetation it makes up for in lush, marshy bottomlands, a mix of potholes, twisting coulees, and shallow washes.

I packed camping gear and hauled my two daughters with me, touting our trek as a fishing and birding adventure. Unfortunately, Bean Lake was only at half-pool (meaning it was half-empty) and its shores were muddy and slick, which may have prevented a sane man from attempting to launch a drift boat.

This was May, with green-up in full effect, and the area was deserted of people. When we arrived, a two-hour-long lightning storm held us captive in the bed of the truck, under a fiberglass canopy. It was an opportunity to spread out sleeping pads and bags, comfy pillows, and an array of trashy food (cheese puffs, potato chips, and dip to be exact). There was a moment when I realized the oddity of this situation — nobody begged for an electronic device, nobody demanded a playdate, and I wasn’t rushing the girls to school, or swim practice, or hoops training, or basketball practice; we lacked a set schedule and if the storm lasted all afternoon and evening, we’d just munch those snacks and continue with our storytelling and card games. As sheets of rain hammered the sides of the truck I thought, this couldn’t be better, all produced by a simple goal: to find and photograph sandhill cranes.

When the storm broke, we set up our tent, split firewood, and generally got our camp in order. And then I made a bad decision — the girls really wanted to fish, so I launched our boat on Bean Lake. While doing so, I nearly got the truck stuck in the mud. In fact, to get the truck out of the mud I had to remove the trailer from the vehicle. Then I put the truck in four-wheel-low and crept to higher ground. Making a second mistake, I pushed the trailer to the edge of the lake and launched the boat into muddy water that offered an inch of visibility and little chance of producing a fish.

I told the girls, “We’ll have to hit a trout on the nose with that fly or that lure, but there’s always a chance.” A half-hour later, I’d changed my tune and was rowing to shore in a steady headwind, dreading what might come next. I hadn’t seen an accessible (and dry) area to get the truck to the trailer and, if lucky, the trailer to the edge of the water. But I could visualize the truck stuck to its axles in mud, the trailer stuck in the rocks, and the driftboat nestled at the edge of the shore, in the mud, 100 yards away, begging for a ride. Worse, I could see the girls stomping around in the mud, and myself standing on the county road, waiting for a rancher to come by and say, “Son, where are you from and what the hell were you thinking?”

Long story short, I moved the boat 30 yards down the shoreline. I wrestled the trailer over boulders and through the mud to a point where the trailer strap could reach the ring on the bow of the boat. Then the girls snickered as I backed the truck over the rocks and between two large boulders — barely clearing on either side of the tires — until I could latch the trailer to the towing ball. Then I cranked the boat across the mud, over the rocks, and onto the trailer. Finally, I loaded the girls, went all four-wheel-drive-low again, and inched my way right out of there.

We got our fire going just before dark, after the wind died, and while the girls roasted marshmallows I heard exactly what I was hoping for: the somewhat shrill and clicking call of sandhill cranes. The girls listened and nodded their heads, but we never saw the birds.

Wherever you find sandhill cranes, they are a treat to watch, especially if you catch them performing their mating “dances” in which they leap into the air, twisting, with beaks extended toward the sky and wings stretched wide, calling to each other. I consider sandhills among the most beautiful birds in the world, with light gray or brownish feathers contrasting with crimson foreheads and those deep-black beaks.

In the morning, after eating bacon, eggs, and hash browns, and roasting more marshmallows (sucker for a Dad, I may have heard the girls say), we set out with our cameras and binoculars, searching for cranes. After a couple of hours of driving and walking we still hadn’t found the birds. So we drove farther north, to the base of Haystack Butte, and followed a small stream toward the Front. Where the canyon widened, in a grassy field next to the stream, we spotted a lone sandhill, walking through the grass, kicking its legs forward with toes high. We piled out of the truck and carefully walked toward the bird, snapping photos and checking it out through binoculars.

I can’t say the girls were as excited as I’d hoped they would be, but they considered the crane’s red forehead to be beautiful. My eldest daughter (the basketball junkie) grabbed the binoculars when I asked her, “How tall are you?”

She said, “About five-one.”

I said, “That bird is five feet tall and it can reach seven feet high with an outstretched wing.”

She lowered the binoculars, frowned at me, and said, “It could block my shot. When am I going to get that growth spurt you’ve been talking about?”

Later that day, as a pair of cranes flew by us, I felt conflicted. Those birds were beautiful, for sure, but I could only think of one thing — how would they taste?

You can hunt sandhill cranes, which wasn’t the case for many years after liberal bag limits decimated populations in the 1940s. Today, cranes are relatively abundant and Montana issues about 500 sandhill permits each year. I’ve applied for the permit several times but have never drawn.

I’ve wanted a mounted sandhill since seeing that deteriorating bird in Wyoming, but I have another reason for wanting to shoot one — people who have eaten these birds call them “the ribeye of the sky,” citing their late-season grain diets and a flavor that’s comparable to turkey and ruffed grouse.

Ribeye of the sky is a far cry from Canada geese, which a buddy calls “flying livers.” I think the best indication of how cranes compare to other birds is this: How many times have friends asked you to take some ducks and geese off their hands, versus offered to give you some sandhill crane?

One of these days I’ll draw a crane permit, and on some fall day in Montana, when those birds are ready to fly south, I’ll drop one out of the sky. I’ll feel joy tempered by the death of a beautiful animal. In the end, I’ll probably justify my harvest by whittling it down to a simple conclusion: You either eat the wild game that’s available to all of us in Big Sky Country, no matter how attractive an animal may be, or you don’t.