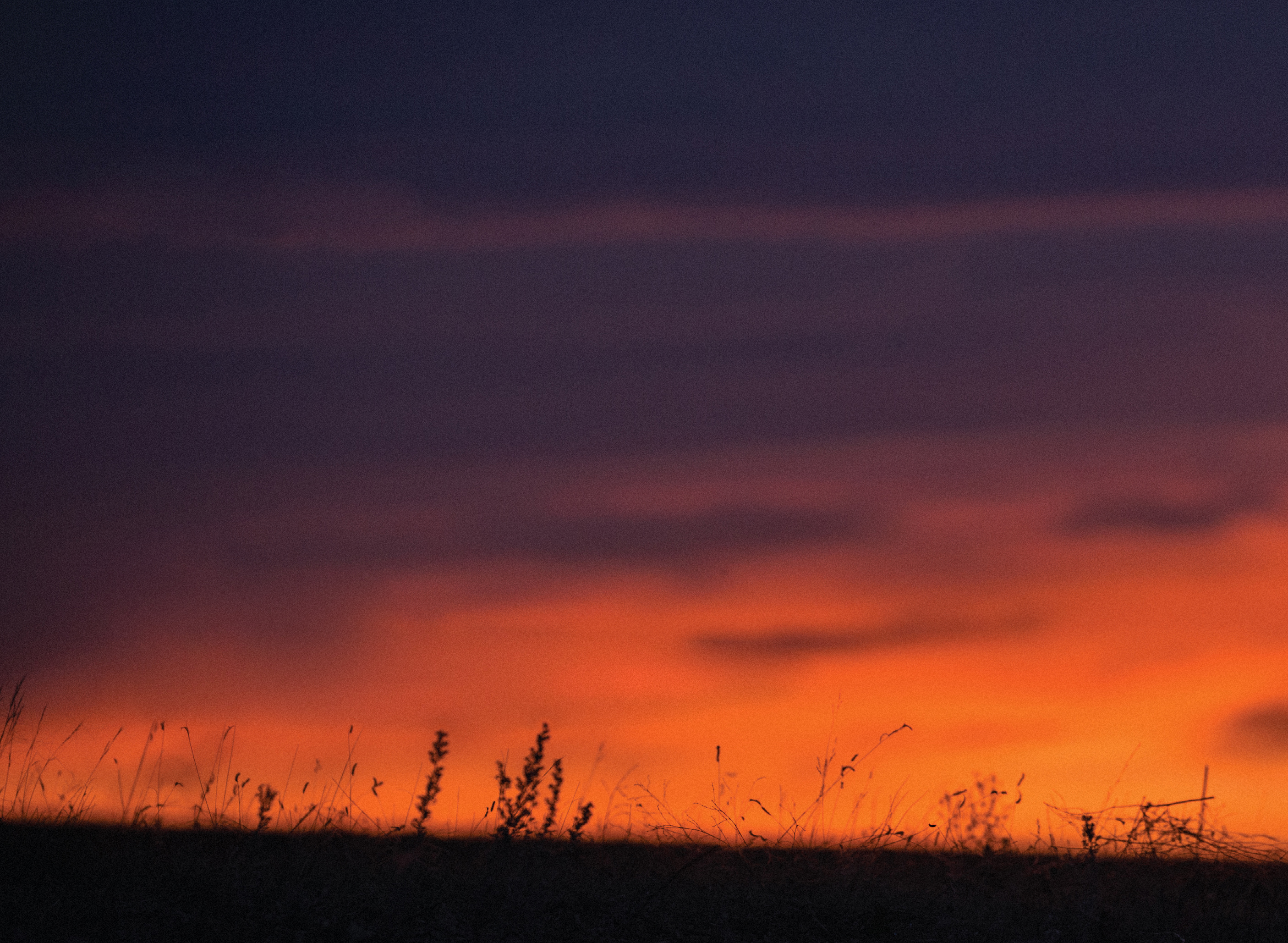 IF YOU LIKE A CHALLENGE, TRY TO SPOT AND STALK THE ANIMAL WITH THE FASTEST HOOVES ON EARTH

There are easier ways to kill a pronghorn antelope.
The spot-and-stalk approach forces hunters to sneak up on the animals, mano a mano, typically in wide-open country, pitted against insanely powerful eyes and the fastest hooves on earth. Antelope have been clocked at 60-some miles an hour, and they can hold their top speed longer than cheetahs. Basically, they could pass you on most two-lane highways, and if they spot you in the field before you see them, it’s game over.

To take an antelope, most hunters — especially bowhunters — place a blind near a water hole and sweat it out in the arid heat, surrounded by sand and sagebrush, waiting for the animal to take a drink before the hunter wilts away. I have no patience. I can’t sit still. So I spot, stalk, and fail… and fail again. I’ve been doing so for several years. I accept these defeats as a trade-off for the high challenge and the opportunity to start the big-game hunting season in mid-August, well before the general antelope, deer, and elk seasons start.

I gained a fascination for antelope back in the 1980s, when Butte natives Ed and Joy Skubitz invited my father and me on a hunt in Southwest Montana. We saw scads of antelope, which was somewhat shocking, because we were used to hunting deer, elk, and bear in thick coastal forests where visibility was limited. Seeing an animal or two a day was considered fast action, and the chances of getting a clear shot when you actually spotted an animal were slim. Here, in the open, the animals were abundant but wary — just the sight of a vehicle sent them across the sage flats at Mach 3. This contributes to the reasons that most hunters view pronghorns as second-class citizens, way behind deer and elk in the popularity contest. 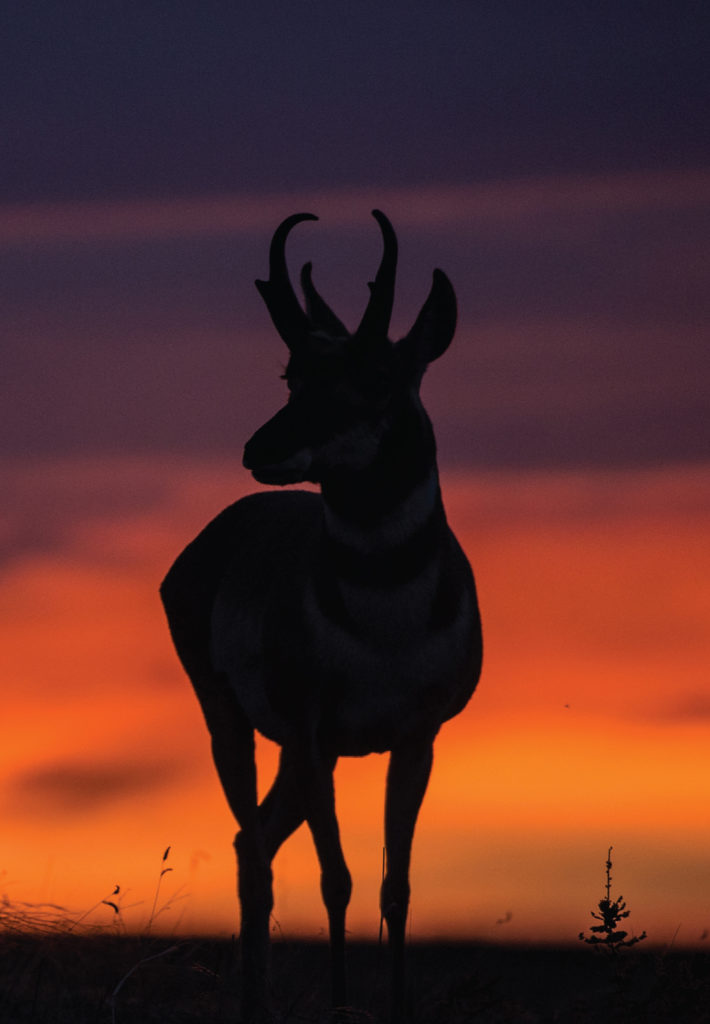 That opinion tends to bring out the worst in some hunters. We’ve seen trucks race across the flats and hills, pushing antelope into corner fences (antelope rarely jump fences, which makes their movements, even at top speed, rather predictable). Once cornered, someone might jump out of a truck and shoot at the fleeing herd. This approach, which is illegal, has wounded animals and ruined a few of our stalks, including a circuitous route toward a bedded buck whose heavy horns may have stretched 16 inches or longer. Booner for sure.

The antelope’s reputation as table fare doesn’t help its cause; few hunters prefer antelope meat over elk or deer, and some even say it’s not worth eating. Here’s the thing: I wouldn’t enjoy antelope if I’d chased it with a truck and shot at it multiple times, possibly wounding the animal before finally placing a fatal bullet. Instead, even when rifle hunting, my friends and family have spotted animals and stalked on foot, trying our best to approach an unsuspecting pronghorn and dispatch it with a single, well-placed shot. When successful, we’ve quickly skinned those animals, discarded their musk glands, and placed them on ice. Later, that meat has been fantastic, offering a sweet, mild flavor as the centerpiece of many a great meal.

Don’t get the wrong message here — nearly all hunters have a deep respect for animals, but it only takes a few imbeciles to taint the experience for others. So, after hunting antelope during the high-pressure rifle season for many years, I switched to the bow, which — while allowing me to hunt in August and September — has crushed my level of success.

An admission: As a bow hunter for however-many seasons, I’ve only gotten one antelope. But the thing is, I never did recover that “one.” I’d located the buck and a doe in a tiny creek bottom, where the buck would not allow the doe to leave. When she ran left, he ran right; when she turned right, he raced left and drove her back into the ditch. High sage surrounded the creek, allowing me to first crawl on my hands and knees, then slither on my belly to within shooting range, about 30 yards. I waited for the buck to stop the doe, then rose to my knees, drew back, and let the arrow fly. The buck raced away, followed by the doe. I’d seen the arrow go under the buck’s stomach and was incredibly disappointed with myself. So many practice arrows, and now nothing more than a few cactus spines in the knee. I walked to where the buck had been, picked up my arrow, and slunk back to the truck where my friend, Chuck, waited.

“Why didn’t you go after him?” Chuck asked.

“It’s an antelope. What did you think I could do — outrun it? I missed,” I replied.

“Then why is that animal laying out there in the field?” he quipped.

I didn’t believe him at first and figured it was some sort of flashback; as a teenager in Alaska, Chuck enjoyed a good party, and still doesn’t think man has landed on the moon. He believes the rest of the world is as flat as the antelope grounds, and probably that Montana’s pronghorns, which are an anomaly in North America, migrated north from Area 51.

I looked at my arrow and noticed a little red on the fletching, then glanced to the center of a broad field. In the middle was an antelope.

Here’s the problem. That buck wasn’t dead, and his head was up, meaning he was alert. Second problem: It was getting dark.

There was no way to sneak up on him, so I decided to sleep in the tent for two hours first. By that time, I expected the buck to be dead. Before my alarm sounded, Chuck said, “Do you hear that?” I shook off the REM, heard the wicked cackling of about five billion coyotes, and replied, “Damn it, there goes my antelope.”

We searched for half a day and never found a patch of hair or hide, let alone the antelope. If you can’t live with the loss of an animal at some point in your hunting career, you probably shouldn’t pick up a gun or bow in the first place. Still, it stings to this day. An animal suffered.

I take defeat pretty well, but there’s another buck, a peculiar looking animal, that I also can’t shake from my mind. I’d never seen a buck with horns as heavy or long, nor prongs (also called cutters) jutting out so far from the main horn. Chuck named him “Devil Buck.”
The buck’s horns angled forward, over and beyond its nose, instead of arching up from the forehead and sweeping back over the ears and neck, as is typical. I wondered if he had any peripheral vision — secretly hoping that he didn’t — and decided to find out.

I spent two hours in a dry wash, sneaking toward the buck, often on hands and knees, sometimes on my stomach, always with an eye ahead for cactus and rattlesnakes. Finally, all that remained between me and where I’d last seen Devil Buck was a high bank 5 yards ahead. I nocked an arrow and crept forward. Just as I rose to peek over the top, I heard hooves clapping against hard clay, and by the time I stood — an all or nothing effort — I couldn’t even see the animal and never did again. Ironically, Chuck watched the whole thing unfold. Apparently, after I spooked the buck, it did a 180 and ran back toward my truck. Chuck, who didn’t have a tag, watched the buck saunter by, a mere 40 yards away.

Too many years have passed to think I’ll get another chance at Devil Buck, but maybe one of his offspring will grow some freaky horns similar to his. If not, no worries. Chuck and I will be out there again one of these days, regardless; he with whatever thoughts are running through his head, and me being impatient and hoping to lift the prairie curse.