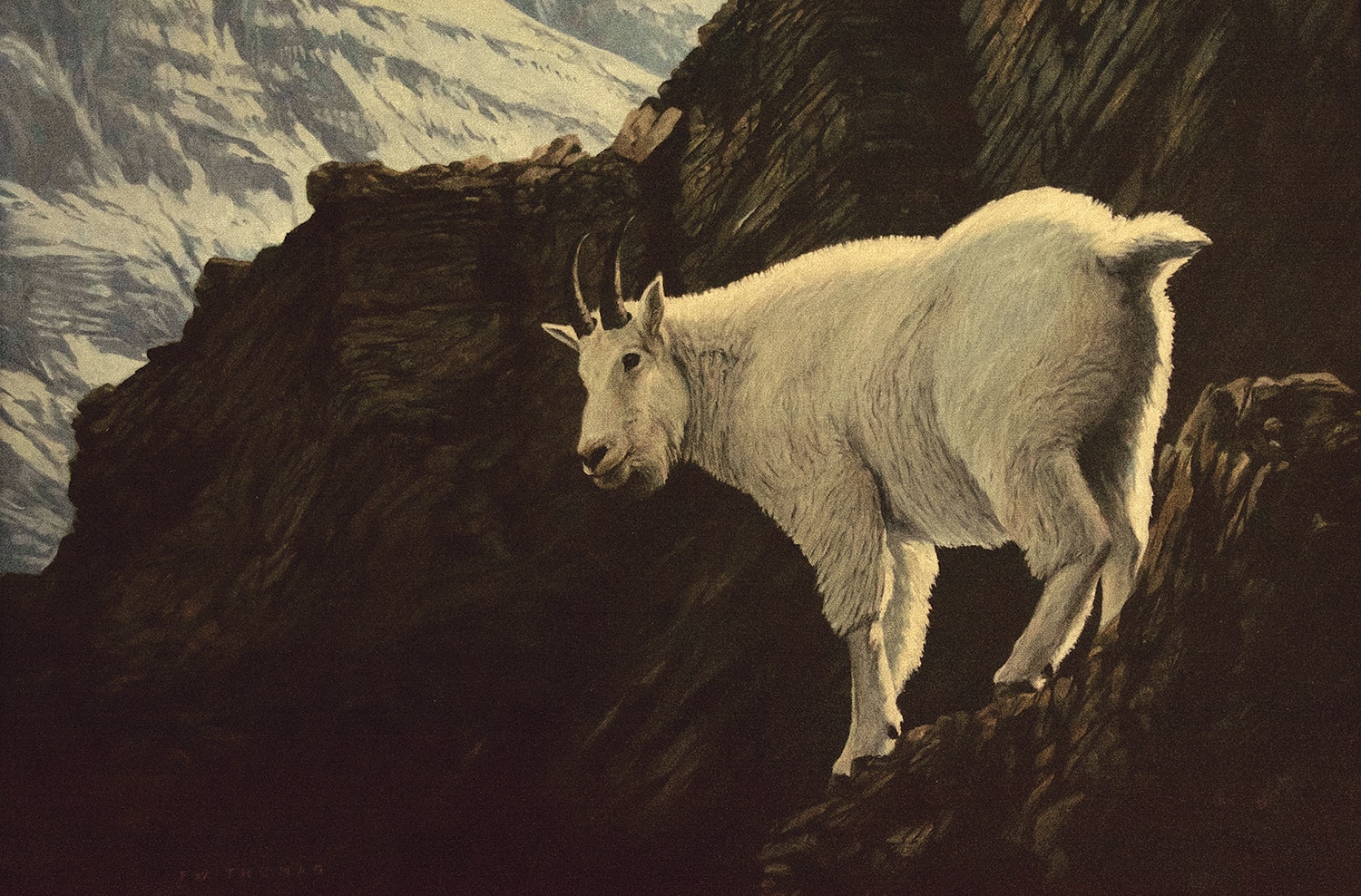 05 Oct Outside: One Missed Step

in Outside, Fall 2018 Written By: Greg Thomas | Illustration By: Fred Thomas Posted at 05:14h 0 Comments
Share
You don’t have to be crazy to hunt mountain goats, but being so doesn’t hurt your chances for success.

Think about it: Goats spend most of their lives above 9,000 feet in elevation, often clinging to precipitous habitat, meaning sheer rock walls and outcrops. Hunters who target these animals must negotiate that challenging terrain and engage in a kind of mental warfare. Often, getting a goat might require scaling a ridge with a 1,000-foot drop off both sides, or tiptoeing along a sheer ledge. And because weather conditions can be ghastly in high-alpine goat country, one misplaced step could be a hunter’s last. And that’s no joke — goat hunters die while engaging in this sport.

I became interested in pursuing goats after hearing my father’s stories about Southeast Alaska. He hunted an area called Horn Cliffs, where the cliffs jut out of the saltwater and rise a few thousand feet before giving way to alpine meadows. Here, goats are safe from coastal grizzly bears and wolves… and most hunters. But not from my father. Several times in his late 20s, he scaled those cliffs, sometimes on his own and other times taking friends and family to chase these hardy, white-haired animals.

I loved his adventure stories, and somewhere along the line I decided that death was an acceptable risk for the potential to harvest a goat. One time, my dad told me, he almost died when he slid down a steep slope, just above a massive cliff, and only stopped by grabbing at a minuscule bush that somehow held. Another time after shooting a goat, he lowered a friend on a rope to retrieve the animal, which had fallen onto a ledge. He retrieved his friend and the goat, but a week later, when using the rope for another purpose, it parted as if made of sewing thread.

He did all of this under a unique mountain peak called Devil’s Thumb, an exposed rock face that challenged writer Jon Krakauer when he was young and trying to, as he described it, “right what was wrong in my life.” Krakauer saw a picture of the mountain in a book and said it was “a singularly sinister tower of ice-plastered black rock” lacking “a place on the entire mountain that looked safe or secure.” He added, “I couldn’t imagine anyone climbing it.” It took him 20 days to reach the top, and for the full, fascinating account, pick up his book Eiger Dreams.

My father scaled those almost-equally challenging mountains minus the high-end mountaineering gear that Krakauer used. I’m not taking anything away from either of their pursuits — just saying they were both crazy, young, likely feeling invincible, and searching for something.

I knew that hunting goats was crazy and sometimes terrifying, but I signed up as quickly as I could, wanting to prove that a boy could take on a man’s game in the most unforgiving environment, and also to one-up my friends who thought that riding a giant roller coaster at the annual state fair was the biggest risk going.

Outside of Alaska and British Columbia, goat hunting permits are limited, but I lucked into one during my sophomore year of high school in Washington. My geographical area included Mount Baker, an active volcano located just south of the U.S.-Canadian border. My dad and I hunted jagged peaks on the flanks of Baker, and one day we noticed mountain climbers across a valley with ropes, climbing boots, crampons, and clothing that resembled sleeping bags with arms and legs. We waved. They stopped. Then they pointed in disbelief — we were wearing lightweight leather boots, blue jeans, and flannel shirts.

I didn’t get a goat that year, but I did draw a tag for the same area the next year. By that fall, we’d gotten to know those lower peaks well and always made our approach to the summit via a 15-foot cliff that was too steep to climb without a rope. On previous hunts, we’d discovered an old rope there attached to a tree at the top. We tested it, determined it would probably hold our weight, and used it to crawl up the incline. It was terrifying business, and every time I did it, I thought about that rope my dad used in Alaska, then asked myself, What am I doing here? I asked the same question another time while traversing an incredibly steep slope on the backside, where a slip meant I’d tumble a couple hundred feet.

On that day, I spotted a goat in a little alpine basin. I snuck into position, crawled out onto a thick tree root over a 200-foot drop, and took my shot. Goats are notoriously difficult to kill. Males may weigh more than 300 pounds and their muscle and skeletal structure is sturdy, built to climb. But my bullet found a weak spot, and the goat dropped.

Later that day, with the goat meat, hide, and head in our backpacks, my father and I started our climb back up the side of the mountain. With the weight, the ascent was excruciating. When we reached the truck, just before dark, we could barely stand on flat ground.

Despite my muscle aches and sheer exhaustion, I was elated. I’d proven something to myself: I could take on a man’s challenge, mentally and physically, and win. And I knew that you couldn’t get that sensation from riding the Rainier Rush roller coaster, even with its 55-foot drop.

In Montana, goats are relatively abundant in some mountain ranges and strangely absent in others. A few years ago, a friend of mine drew a goat tag for the Madison Range. He’d never hunted goats but knew I had, and he quickly enlisted me to help.

Joined by another friend, we left late one afternoon and hiked into some of the most grizzly-dense turf in Big Sky Country. We set up a three-person tent and our sleeping bags in the dark at 10,000 feet. We followed bear protocol and strung our food up in a tree a good distance from camp. Then we crawled in for a cozy night, knowing that a tent’s three-person rating means you’ll fit, but you won’t be comfortable.

In the morning, I crawled out of the tent and found a half-eaten elk leg about 5 feet away. Apparently, we’d set up camp in the dark right next to it. So much for hanging the food, we mused. Fortunately, Mr. Griz hadn’t come back to claim the prize. We also woke to a snow-covered landscape, which is about the worst conditions you can hunt goats in. But between clouds scudding past the surrounding peaks, we spotted three mountain goats. We packed and started up, but not before I told my friend, Bob, a cardinal rule of goat hunting: You do not shoot a goat on the other side of the mountain.

That afternoon, under now blue skies and in snow up to our knees, Bob spotted the goats in a glacial cirque… on the other side of the mountain. Down we went, and when Bob put the rifle to his shoulder, I knew what would happen next. He was in the midst of “buck fever,” while I was in a more rational state. He was thinking, “There’s my once-in-a-lifetime goat, and it’s worth any effort to get it.” On the other hand, I was thinking, “Damn, we’re a long way from camp, on the wrong side of the mountain.” Of course the rifle fired, the goat fell, and then it rolled downhill even further from camp.

A couple hours before dark, we had the goat skinned, quartered, and loaded in our packs, and we began heading to the ridge that separated us from camp. Once on top, at just under 12,000 feet, we slid down on our rears, using the heels of our boots to moderate our descent.

Back at camp, while hanging the goat hide and meat in a tree, I said, “Bob, you broke both rules of goat hunting: You hunted cliffs in the snow, and you shot a goat on the other side of the mountain. And you got away with it.” He smiled and laughed, knowing I spoke the truth. But there was something in that look that told me that hunt had challenged him tremendously, physically and mentally, and he’d proved to himself it could be done.

When it comes down to it, the best hunts are never easy, and never go exactly as planned, but they leave you totally exhausted with a sense of accomplishment. Goat hunting, though you may hate it at times, will do just that.