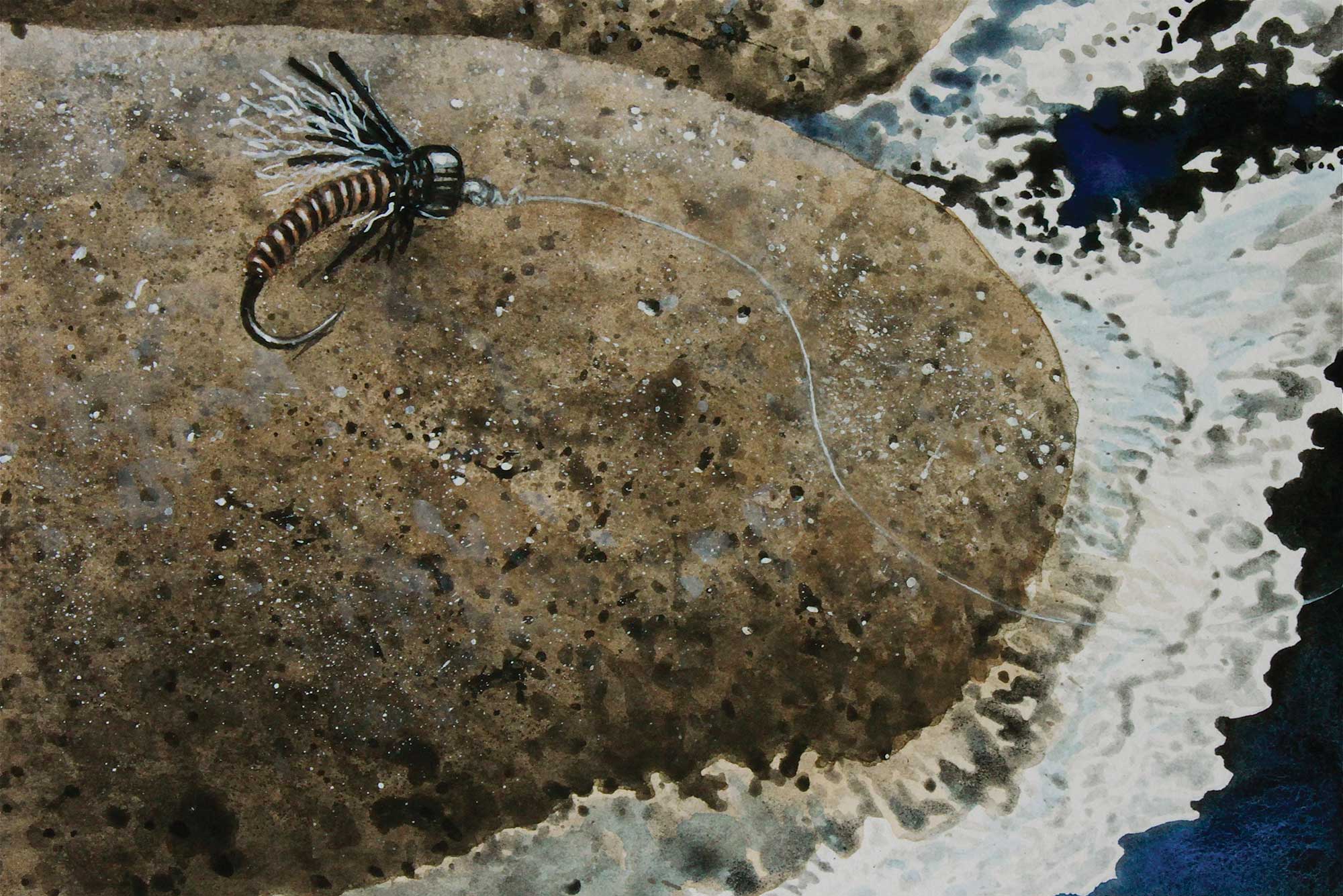 in Winter 2015 | Outside | Written by Greg Thomas | Illustrated by Fred Thomas Posted at 23:53h 0 Comments
Share

Several seasons ago I switched from wearing a classic fly-fishing vest to a modern fanny pack, not necessarily as an outdoors fashion statement, but rather to avoid being choked to death.

When fully loaded with fly boxes, tippet spools, a water bottle, bear spray and a digital SLR camera with extra lenses, that vest rode high in the front, and its YKK zipper and snap clasp gnawed at my neck like a wolf tearing at a deer’s throat.

The fanny pack carries my gear more comfortably, but the narrow, dark and seemingly bottomless compartments makes finding that gear, particularly small items, nearly impossible without wading to shore and emptying the entire thing onto the bank.

This may not pose a problem for you, but I am an admitted gear-head and a fly-hound who carries all possible solutions to an array of Western hatches even when the bulk of a particular event — say, a pale morning dun spinner fall — has long passed. I am the opposite of a minimalist, the anti-Christ to tenkara, and defiant of the idea that you can get away with just a few fly patterns while fishing Rocky Mountain waters.

This puts me at odds with people who say that every trout in the Rockies will eat partridge and gray soft hackle, or that the standard issue black woolly bugger is the only fly you need. Even if I chose a one-fly-does-it-all path, I’d need it tied in five sizes and every imaginable color combination, which would effectively kill the point.

As much as I like being prepared for multiple hatch scenarios, I do admit this gear-heavy mentality can be a burden. And that is why, with the multitude of summer hatches long past, and fall’s predictable olive and caddis emergences now over, it’s a relief to load the fanny pack with winter gear. That’s because winter is a time when you can get away with only a few fly patterns and still catch lots of fish.

That statement may raise the eyebrows of those who spend their winters on Montana’s big tailwater rivers, such as the Bighorn and Missouri, but even there the variety of options is whittled significantly. All winter, from late November through March, trout focus on midges and little else, although small crustaceans, like sow bugs and scuds, have their moments, too. Because midges are small insects, the flies that match them, likewise, are tiny and you can fit a couple hundred into a single thin box. On a typical spring, summer or fall day, I carry four or five big fly boxes in my pack. During winter, I carry one or two boxes, which is a substantial and refreshing departure from the megaload.

If I were to limit my winter fly arsenal to five patterns, I would likely choose the serendipity or $3 dip to match midges; a standard egg imitation; a San Juan worm; a parachute Adams; and a Ray Charles (named, fly aficionados say, because it’s so effective a blind man could catch fish on it). There are more precise imitations, to be sure, but these flies, tied in various colors, have you covered in most situations.

Midges come off on most rivers every winter day, typically beginning in the morning and peaking in the afternoon. The serendipity and the $3 dip (which is a variation of the original serendipity) are perfect choices early in the day when midges ascend from the bottom to the surface. I fish these patterns below the surface and under a strike indicator, and I’ll often fish two flies at one time: a size-18 $3 dip as the top fly and the serendipity or some other pattern tied off to the $3 dip, separated by 14 inches of tippet. I keep these flies near the bottom by affixing a couple split shot to the leader, above the flies. If I think trout are feeding in the middle of the water column or near the surface, I’ll remove the split shot.

I fish an egg imitation all winter (often trailing a $3 dip behind it), but it’s especially productive in late fall and again during late winter and early spring. In fact, in the fall, brown trout and whitefish spawn and their eggs are readily available. Rainbows, browns and cutthroats feast on these protein-laden gifts. During the spring, rainbows spawn and brown trout take advantage of this type of feast again.

Part of the egg’s appeal to me is that I can tie one literally in 30 seconds, simply covering the hook with thread, then tying a tuft of egg material on top. No need to be fancy. No need to wind in some sort of yolk. Two-tone unnecessary. A simple tuft of cream material on a hook, bounced along the bottom of a stream, takes fish all winter.

Say you’re not getting them on midges or eggs. If that’s the case, you might try a San Juan worm, which imitates an abundance of aquatic worms that are found in Rocky Mountain rivers. It’s not the prettiest pattern, I think we’ll agree, but there are times when the trout key in on it. When they do, you might end up with a 30-fish day. Then the San Juan miraculously becomes the most beautiful fly in your box. Fishing the worm correctly takes a little skill, meaning it’s fished under a strike indicator, held down with split shot, and bounced along the bottom as if drifting naturally in the current.

But you don’t have to fish under the surface to catch trout during winter. Some of the best dry-fly fishing of the year occurs when there’s ice on the banks and snow falling.

Look for adult midges to be active on the surface beginning early in the afternoon, say 1 p.m. This surface activity continues until the light fades and the temperature drops around 4 p.m. Anglers can match single midges that break through the surface film and float on the currents, but it’s often more effective to match a cluster of midges.

These clusters occur when female midges break the surface film and are charged by one or more males. The males, of course, are trying to breed the females and this causes a disturbance that trout key in on. According to Madison River fish guru Kelly Galloup, the fish also are drawn to the reflected light off the midges’ wings. To match that, Galloup fishes a midge with reflective strands tied into it. You can do that, too, but I simply fish a small parachute Adams that, I believe, fish take as a single midge or as a cluster of midges. Sometimes I’ll notice adult midges clustering around my parachute Adams. When that happens, a trout usually eats my fly; an event you might describe as legal chumming.

If you fish the big tailwater rivers this winter, you should carry a few scuds or sow bugs (or better yet, both). These little freshwater bugs make up a significant portion of a tailwater trout’s diet. The Ray Charles, tied in various colors but especially in gray and cream, works really well on Montana’s Bighorn. It also takes fish on the backwaters and sloughs of most rivers, where these scuds and sow bugs often congregate.

I was drawn to this pattern simply by the name and only afterward learned that this fly lives up to its reputation. Again, the Ray Charles is typically fished along the bottom, under an indicator and split shot, often as the trailing fly when fishing a San Juan worm. You can crawl this pattern or dead-drift it with equal success. And when you lose one of these to the rocky bottom, you don’t have to fret: Tying a Ray Charles takes about two minutes.

I’m not a guy who will ever turn into a complete minimalist fly fisher, and I doubt you’ll ever see my byline on a story proclaiming that you can match every Rocky Mountain hatch with, say, three dry flies or one soft-hackle. But I do confess that winter fishing with a few simple patterns is a refreshing change from being burdened with gear. I may not stand out on the river this winter, but by spring you’ll probably recognize me: I’ll be the guy hunched over at the waist, struggling to the stream, ready to match every stage of every insect emergence known to man. Say hello and hand me some water as you pass me by; I’ll have some extra flies to offer in exchange.