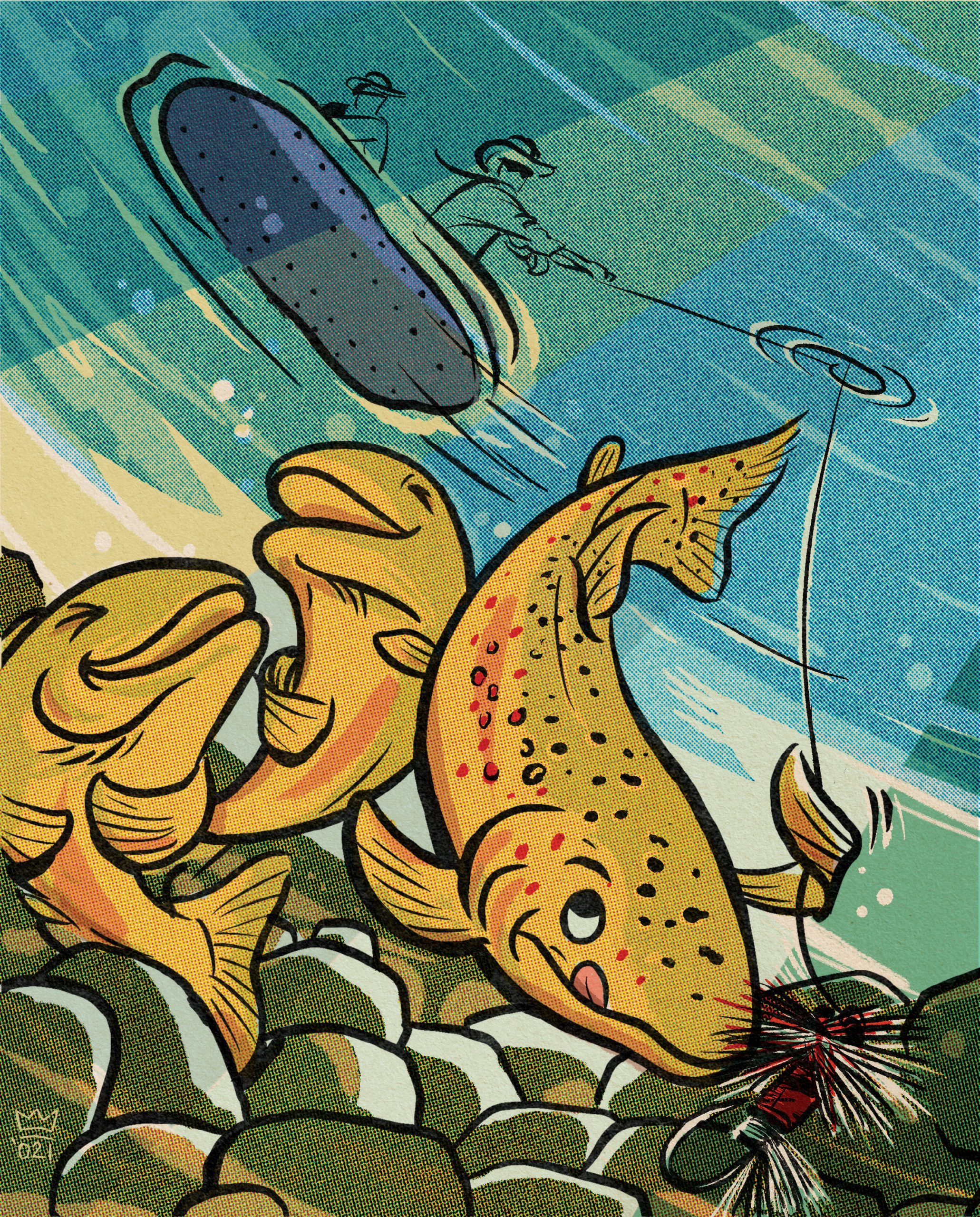 “Was that a fish?” I ask with a confused look on my face.

“Yes, Jeff. That was a fish,” the guide responds, shaking his head.

He sees them all. He knows what to look for, what to notice, what to recognize. He’s a fly-fishing guide. He does this for a living. He knows what he’s doing. This is his world. This drift boat is his office. He is here every day, just like I’m in my office every day. He can reach for and find things in his boat without looking, while he maneuvers it down the river, and while he watches as another rainbow trout — this one he estimates at about 17 inches — rises to my fly, actually takes it into its mouth, and spits it out. I stand there in the bow of the boat, legs bracing me against the riffles. I’m not sure what just happened.

Try this next time you go fly fishing: Rather than counting how many fish you catch, count how many you miss. It’ll be an eye-opening experience. How many you should have caught. Whatever number you come up with at the end of the day, you might as well multiply that a bit, because for every trout that you are aware you missed, there are countless others that you were oblivious to. And I am only referring here to the ones that rise to your fly and you miss setting the hook. There are also the fish that you manage to hook but lose during the fight.

There are many reasons why we lose fish. Let’s explore a few of them: I tend to gaze off into the distance as I fish. It’s a good tendency, I think. Floating down a river, be it the Yellowstone, Madison, Missouri, Jefferson, Bighorn, or any number of others in the Northern Rocky Mountains, is a pretty spectacular experience. I might make a nice cast and have a good drift going. I’ll be watching my fly, but then I’ll see an eagle overhead or an antelope off in a field, and my concentration wanders. I may see nothing at all, other than the trees, the sky, and, of course, the river itself, which ain’t a bad thing to look at. That’s always when a nice rainbow comes to my fly, but I’m unaware. The guide tells me to fish out my cast and take my scenery breaks afterward. But who listens to the guide? I spend my day in an office, looking at a computer screen and a sales chart on the wall. If I want to look off at the green hills and the wildlife, I’m gonna.

No, I’m kidding. I do listen to the guide. I listen to him carefully. In fact, not only do I listen to him, I do everything he tells me. But sometimes as my fly drifts along, especially if I’m sinking it with a split shot, it may bump into a rock or two. Or three or four or 100, and that’s when the guide yells,

“Yes, Jeff. That was a fish.” He patiently answers. (It’s important to fish with a patient guide.)

However, there’s a fine line — a tippet’s thickness — between jumpy and too jumpy. I tend to overcompensate, especially if I’ve missed the last several fish. I tend to get over vigilant and become too jumpy. That’s when, at the slightest movement of the fly on the water, I strike hard, bring the fish flying backward, and we duck as it sails behind us, tangles up in the line, and drops into the water behind the boat. Then, Vince gets to practice his line-untangling skills. He loves it when I give him that opportunity.

Sooner or later, I’ll do things right and hook a fish. Then all of the other skills have to come into play. In simple, easy terms, the most important thing, once the fish is hooked, is to keep a tight line. Makes sense, doesn’t it? If you allow the line to go slack, the fish will throw the hook and be on its merry way. Bam, you’ve lost another one.

But what causes the line to go slack? Way too many things. In my case, while I’m attempting to keep the line tight and strip it in smoothly, I lose track of what the heck my hands are doing and there it goes. I try to keep the line under the index finger of my right hand on the rod, while I strip it in with my left. But frequently, in all the excitement, I flub it. It doesn’t take much to allow the line to go slack, and when it does, the trout take advantage of it, shaking their heads, and, now free of the hook, they swim off downriver, probably laughing at me over their shoulders. Vince smiles and shakes his head, just like the trout, and tells me to get my fly back on the water and try again.

Kyle, another guide who likes to practice untangling lines with me, will patiently (remember the importance of a patient guide) give me some advice on how to keep the line under my index finger, keep the rod tip up, and keep the line tight. When I do everything right and bring the trout to the net, we admire its beauty and then release it, and Kyle says, “Let’s do it again. See that little clump of grass up ahead on the left? Cast tight into that.”

I listen to him. I pay attention. He knows what he’s doing. I respect that. But then I’ll see a deer drinking from the edge of the river or a kingfisher perched in a low-hanging branch, and my focus wanders.

I may lose my fair share of fish, but I do see some cool things. Sometimes I ask, “Was that a fish?” Sometimes I will paraphrase Dr. Seuss and say, “Oh, the fishes you’ll miss and wish you caught.”

But that’s okay. Sometimes I do catch trout, and that’s when I say, “Thanks, guys.”