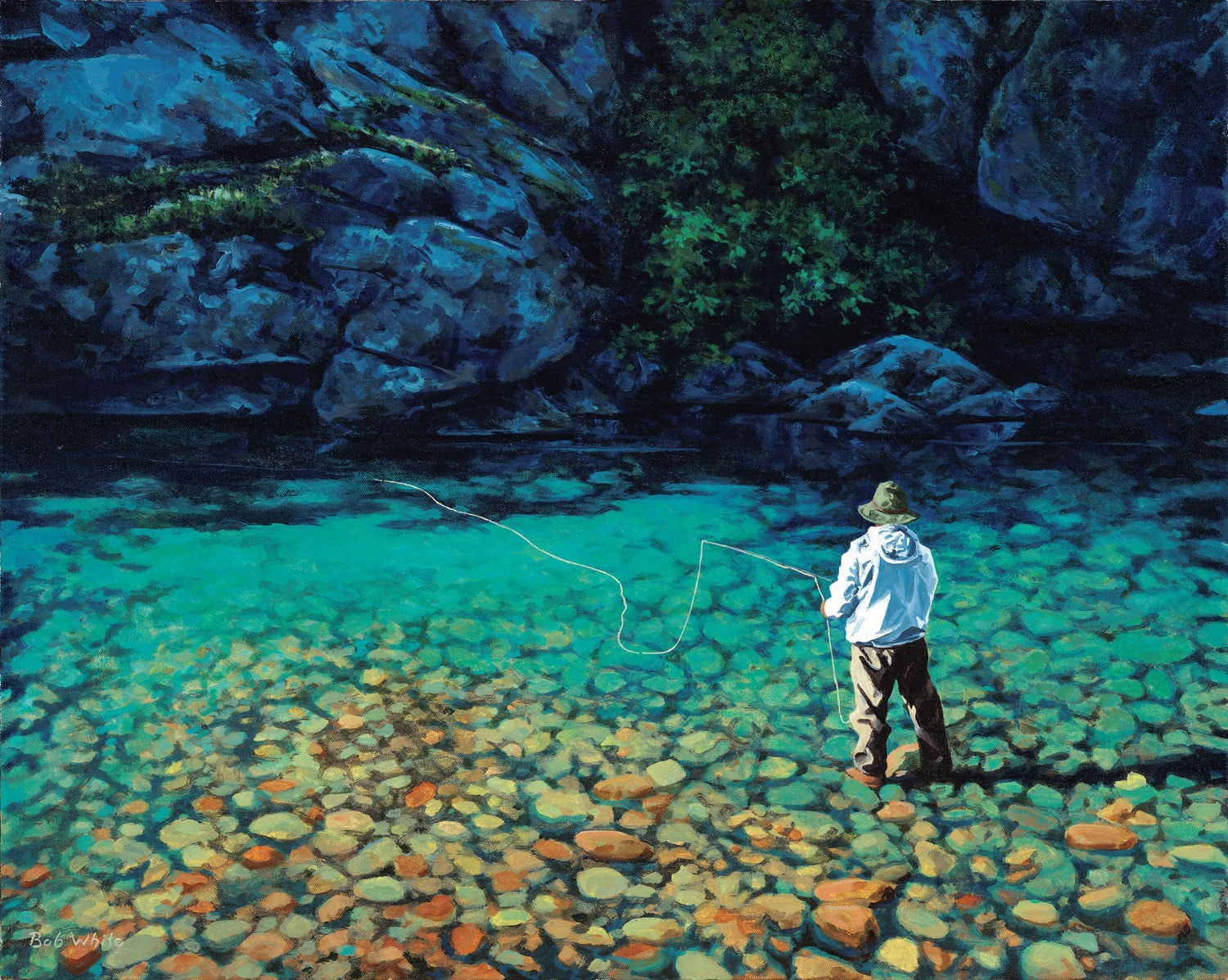 13 Jun Outside: No Name Creek

Dust hangs over the forest road, settling visibly on a dark SUV parked halfway up the mountain. A guy wearing a bleached-out Michigan T-shirt stands by the vehicle’s cargo compartment strapping on a waist pack. He glances over his shoulder before he reaches under a jacket and pulls out a tube about 2 feet long.

“If we run into anyone, I’m chucking this in the brush,” he says, possibly to himself, possibly to the dog. Or maybe he’s talking to me, as by this time I’ve unfolded myself from the car and gotten busy slapping SPF 30 on any bits left exposed by my plaid shirt. My legs are better protected in a pair of truly hideous convertible pants, with zippers that hold the fabric away from my thighs like little hoop skirts and a back pocket that hangs from one seam like a flag.

Then I point to his hand, the one not carrying the tube. “What’s that?”

He holds up a wad of clear blue plastic. I shake my head. That will need further explanation once we get off this road. “We’d better get going. There’s no reason for anyone to park here. Except maybe a woodcutter.”

There certainly appears to be little to attract the casual forest user. Around us we see bulldozer tracks, a heavily thinned ponderosa forest, and slash piles bigger than our house. No vistas to photograph, no berries to pick, no trails to hike, no fish to… 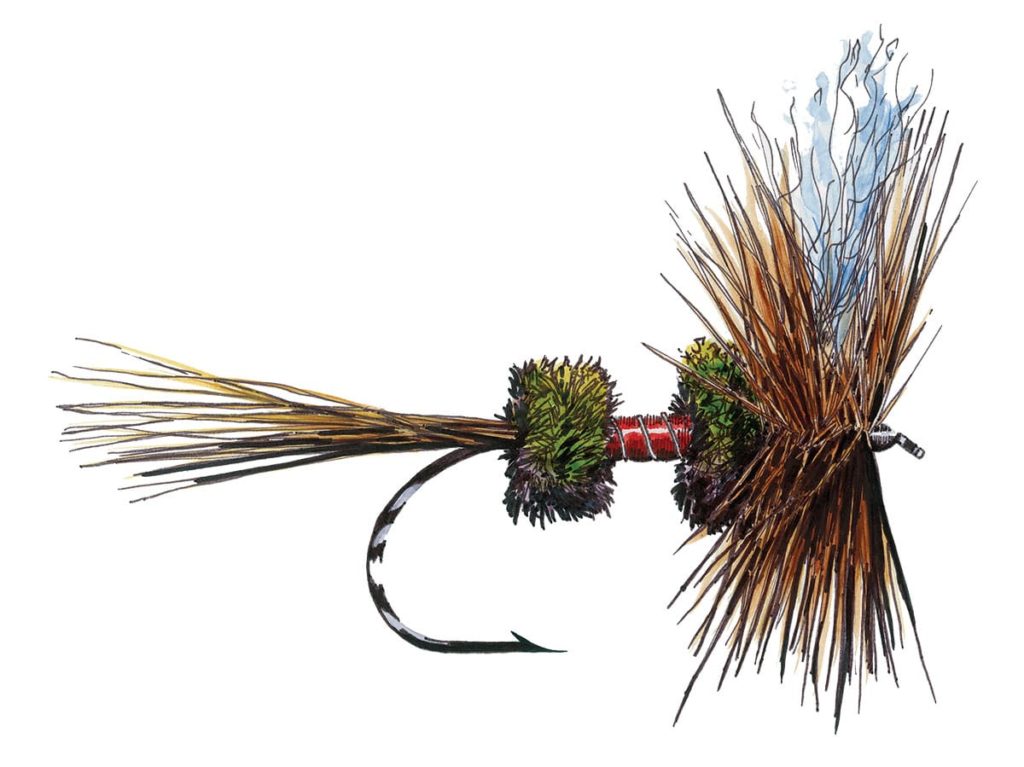 Oh, wait. I guess that’s why we’ll never be able to get one of those Montana license plates with the pretty fish on it, at least for any vehicle we take fishing. We have too much to hide.

I check to make sure my fly rod is in my backpack, and we head diagonally up the slope. On this warm, dry September afternoon, pine needles crackle, and paper-brown leaves of arrowleaf balsamroot shatter underfoot. Scout, our Australian shepherd, zigzags back and forth ahead of us, snuffling up scents. We follow her into an area burned the previous year as a last-ditch effort to protect the neighborhoods below from wildfire. Some trees were completely incinerated, leaving only small, complex pits where even the roots have disappeared. But others were left only blackened, and still others untouched.

Now I’m ready for my explanation. “Okay, Tony, what’s up with the pool toy?”

Yes, in the middle of this partially burned forest, my husband is carrying, in one hand, a four-piece fly rod, and in the other, an uninflated blue plastic floatie ring he bought at an ABC Store in Honolulu. Don’t worry about aquatic invasive species; it has been clean and dry for 10 years.

I don’t plan on swimming today. But at least we agree on our destination, though we hesitate to give it a name. It’s our secret place. Tony found it first on Google Earth, a world he inhabits on winter evenings when fly-fishing season feels uncomfortably far away. He noticed a crease in the land where shadows cut sharply across a stream, obscuring it from view. On our initial scouting attempt, we reached the water by dropping off a switchback onto a painfully steep slope. Later, we worked out a longer but easier route following the contours of the mountainside.

He has since returned a time or two to fish. But for me, something has always gotten in the way. Last year’s plans were canceled by a lightning strike that ended up torching 50,000 acres — maybe even our secret place.

Our plan is to gain just enough elevation to drop into the creek at the right spot. But following a stretch of fire line brings us across the mountain a little high, and we cliff out. From the edge, we can see that part of the opposite hillside burned hot, converting trees into black toothpicks. But the burn was patchy elsewhere. We still can’t see the stream bottom. “I think it’s okay,” Tony says.

We back off from the cliff and climb down a safer route, clutching some skinny aspens to stay upright. A few last steep steps and I can look into the heart of the stream.

We’re standing at the abrupt end of a gorge, walled with dark rock to the height of a tall tree. Years of spring flooding have carved out a curving, cave-like space, its sides etched with grooves and tiny ledges. Upstream, the creek disappears behind a narrow bend. At our feet, it spills into a broad, shallow pool, all golden reflections flashing over amber cobbles. A knee-deep current, marked by a ripple, runs down the middle. “I won’t need this,” Tony says, setting aside his floatie.

I park myself near a clump of purple asters and start building my fly rod. Before I began fishing small streams, I would have been surprised that places like this held fish. Now I’m surprised when they don’t, at least in Montana.

“What are you tying on?” Tony asks, making conversation.

“A Royal Wulff,” I reply. No need to get fancy in conditions like these. Usually, all you have to do is drop a Royal Wulff next to the main current where the water looks like textured glass.

Despite my confidence, I miss the first strike, but I’m ready for the second. A mid-sized trout takes the fly with a leap and a corkscrew, and a fish half as big zooms out of the shadows to chase it. When I remove the hook, I see the smaller one is a cuttbow, a little more bow than cutt.

We fish our way up the creek, sticking to the rocks when we can and carrying Scout when we need to cross deeper water. Now that she’s older, she doesn’t like swimming in a current.

Upstream, a ponderosa has fallen headfirst into a narrow slot. We hug the tree’s red trunk as we weave our way through the broken branches, and Scout walks around on a ledge, waiting for me to lift her down on the other side. Where the gap widens, I can see what Tony was talking about earlier. A small waterfall pours over a messy logjam, filling a large, steep-sided basin wall-to-wall. At these water levels, it looks wadable for humans. But Scout is not going to like it.

We could carry her through the deep section. But there’s still that ankle-breaker of a logjam to worry about. I unconsciously flex my foot, checking for a twinge from an old sprain.

Tony is unlikely to be discouraged, even though he has already broken his ankle. Twice.

“Why don’t you fish up above? Scout and I will stay here,” I say.

I settle Scout on the one tiny triangle of dry ground. Though the surrounding forest is extra-crispy, here it is dim and damp. Moss cushions the rock walls, and overhead, leafy shrubs nod at the brink.

Fishing the big pool is almost too easy — little rainbow hybrids keep launching after that same Royal Wulff. I consider a wet fly but decide to let the deep retain its mystery. After a while, I stop setting the hook and eventually stop fishing. I have satisfied my curiosity. My feet are getting cold. I lean against the rock wall and Scout pushes her nose under my hand.

She keeps one ear cocked for Tony, who is gone longer than we expect. When he finally returns, he says there was just another pool, and another one after that, and another fish, at least a little bigger than the one I caught. I don’t mind. Fly fishing is not a competitive sport for me. Most of the time.

The way back seems longer, though much of it is downhill. I ask Tony, “Would people want to come here even if they knew?” The little gorge may be beautiful, but there are plenty of small streams with easier access and fish just as big.

No matter. We’re still not telling.

At the car, we quickly stow the fly rods, and the floatie disappears for what could be another decade. Scout hops onto the back seat, and I climb in and peel off my gritty socks.

Tony stands by the road and pulls out his phone. Surely, with all our gear put away, we have no more need for secrecy. Anyone driving by — and there is no one driving by — would see only a guy hunched over a tiny screen. He may even look a little lost. But he’s just pondering a timeless question.

“You choose,” I say, already knowing he’s going to get both.

We head down the mountain, trailed by nothing but dust in the rearview mirror.