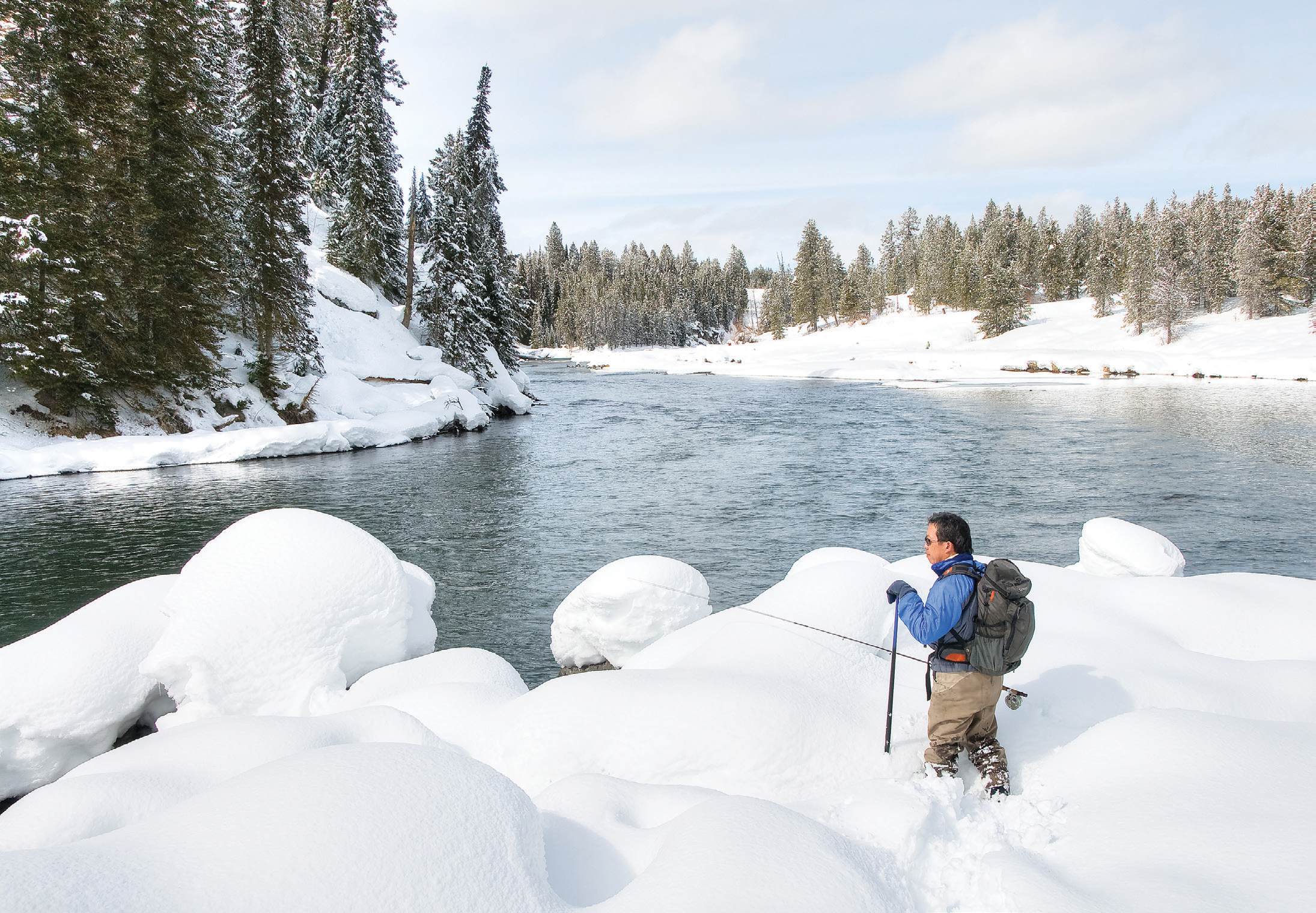 24 Nov Outside: A River Runs Through Winter

Some might say that if you want to experience all the river recreation that Idaho has to offer, there’s one waterway that rules them all: Henry’s Fork. The official headwaters begin at Big Springs, which produces 120 million gallons of water each day for the Henry’s Fork and its 1.7-million-acre watershed. Bubbling out of the ground, the Henry’s Fork flows into the Snake River less than 30 miles south of Yellowstone.

According to the National Park Service, a trappers’ brigade led by Andrew Henry found the river in 1810, while being forced out of the area by the Blackfeet. Henry led his brigade up the Madison River, over Raynolds Pass (near the Quake Lake Slide), past Henry’s Lake, and down along the river that would one day bear his name. Today, these waters may be the best trout stream and lake in the lower 48.

And in the winter, the Henry’s Fork is all Idaho: no big tourist buses, no floaters on tubes, no day-pass fishing licenses, no out-of-state plates. While Island Park is notorious for more than 200 inches of snowfall each winter and the area’s world-class snowmobile terrain, for the avid fisherman, the oft-closed highway and socked-in visibility are just tollbooths on the way to great fishing.

Snowshoeing out to Box Canyon, or coordinating the logistics of getting a boat through the snow, is worth every negative digit temperature times one hundred; as Teton Valley Lodge fishing guide Tyler Fark says, no one ever regrets a day angling. “Sometimes we are wondering how we’re going to drag the boat out and, before that happens, we have to figure out how to get this boat over the 4-foot wall of snow that’s sitting on the bank — and the bank is already naturally taller than the river,” he says.

But, with rushing currents replete with Yellowstone cutthroats, rainbows, and browns, as well as mountain whitefish, it’s no wonder Fark loves to fish these waters. “Winter is one of my favorite times to go. Maybe that’s because it’s the one time of year I [actually] get to fish — the rest of the year, I am up guiding — or maybe it’s the fact that no one is out there.”

According to Henry’s Fork Foundation Executive Director Brandon Hoffner, when a trip in winter conditions is complicated for the angler due to snowfall and cold temps, it’s actually good news for the river. “The Hank” — as locals fondly call the Henry’s Fork — offers an introductory lesson in time travel. The snowpack you see in December, January, and February is the water flow in 12 to 18 months. So, if the conditions are mild enough to get down to Box Canyon without snowshoes, it should send shivers up your spine regardless of how many base layers you have on.

Through a multi-agency partnership, the foundation is working to improve the management of the area’s water. “Keeping more water in the Island Park Reservoir, based on a lot of data and a lot of modeling, will benefit the fishery and, in many ways, it benefits the entire system,” Hoffner says. “You keep more water in the reservoir so that it can have more winter flow, and that keeps trout populations higher, because it leaves us with a smaller hole to fill.”

Water management keeps the whole Island Park caldera healthy for fish, but, even in the dead of winter, traffic is picking up in the area. It’s mostly Idaho license plates, but sometimes even Hoffner can’t find a place to park. “Right now, water is the driver of fish populations,” he says. “We’re not seeing that angling pressure is causing a decline in fish populations, and I think Fish and Game agrees with that.”

Hoffner says one year he and his wife decided to go fishing on a rare bluebird Valentine’s Day, only to find out that great minds think alike. “It was like 45 degrees over here, and we couldn’t find a place to go fishing until we called and asked permission from a private landowner, because every public-access spot was chock full of people,” he says.

So far, the multi-agency partnership has produced about 18 percent more wild trout as the alliance works to recruit more young fish into existing populations. The winter vantage point provides a well-focused peek at the partnership’s impact, but no matter how well the water is managed, good fishing can still be a challenge because, all else aside, it’s still fishing, says Fark, who accepts a certain truth as both guide and angler: “Fishing conditions are what they are. Whether it’s streamer fishing or tossing little dries. … There’s not much we can do about [conditions]. So many times I have been out with buddies wondering if what we’re doing is a big mistake, but then we have an amazing day.”

Determining what’s a good idea and what’s a mistake often comes down to two critical components of trip planning: staying dry and managing the boat. “My most important piece of gear is a pair of waders that do not leak. If you get wet and it’s 30 degrees outside, you’re going to be freezing cold. Whatever you can do to stay dry — waders, a rain jacket over your puffy jacket, all your layers — is the most important thing. As soon as you get wet, it gets pretty serious,” the fishing guide says.

Some anglers simply don’t plan around anything that requires a trailer, preferring a raft and a flatbed over a heavy drift boat. Fark adds that there are a number of access points along the Henry’s Fork, making it one of the easier rivers to fish in the winter. “You don’t have to cover a lot of water,” he says. “In the winter, when the water levels are low, there are only so many deep pools they can be in.”

But Fark isn’t telling anyone where those pools are. “I can’t give up my secrets, but I will say that you should fish where you have been before, especially in the winter, so you know what you are looking at.”

And what you see in the winter is what you will be fishing come summer and fall; it’s an endless cycle of water and fish.

Tibby Plasse moved to Victor, Idaho sight unseen in 2009 and can’t find a good excuse to leave. A regular writer for the JH News and Guide, Teton Family Magazine, Western Home Journal, and other regional publications, Tibby loves romping in the mountains with her son and bird dog no matter the season. Her podcast on biodynamic agriculture can be found at willforces.com.