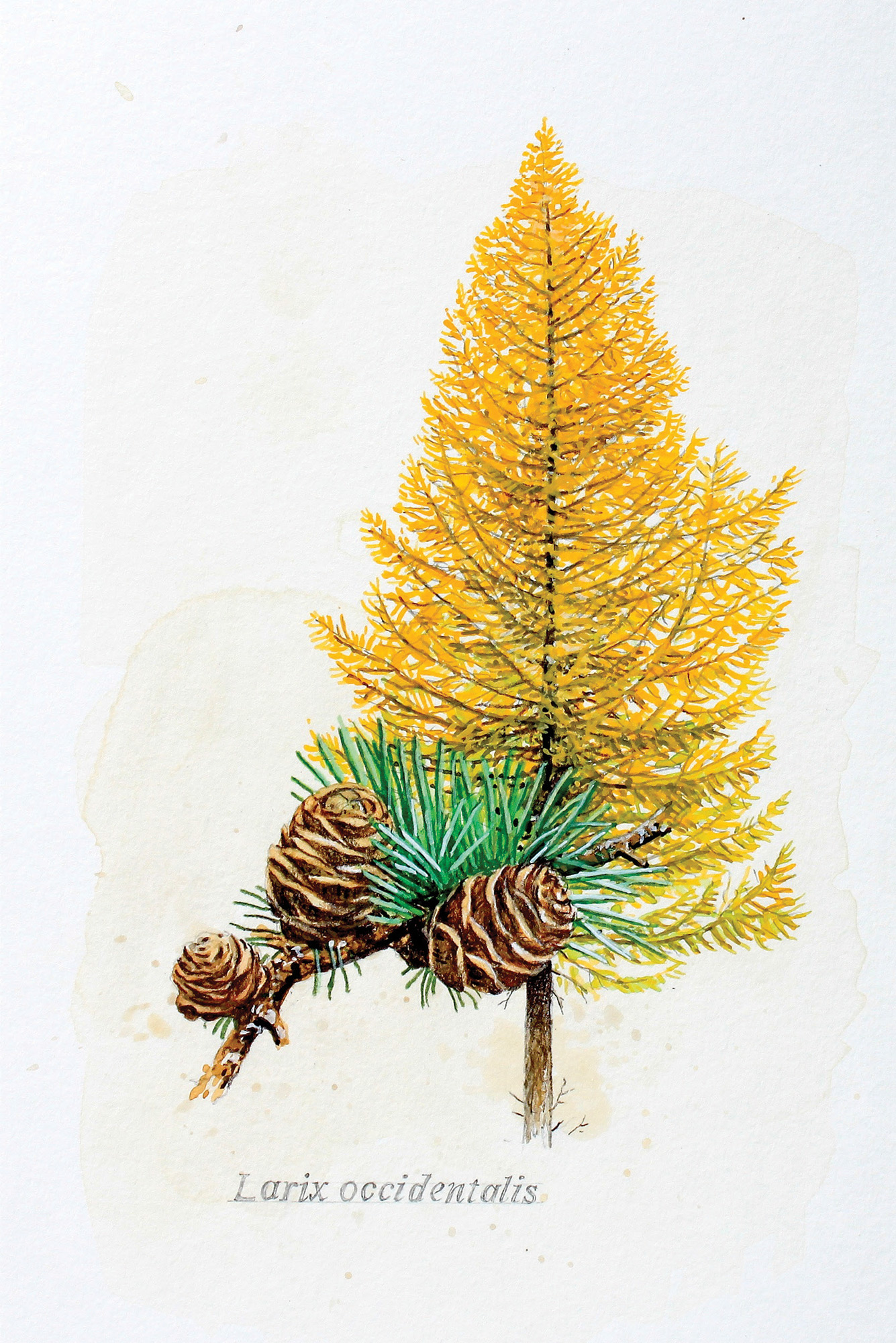 30 Sep Outside: A Larch by any Other Name is not a Tamarack

Written by Greg Thomas | Illustrated by Fred Thomas Posted at 21:59h in Fall 2014, Outside 0 Comments
Share

I had a college buddy who used to flip off every logging truck that passed by. This wasn’t a problem on the highway where he could step on the pedal of his souped-up Toyota pickup and outrun any semi on the road. But this was downright scary when we encountered one of those huge logging trucks on a narrow dirt path, way back in the mountains, and my friend felt compelled to make a point. He’d stick his arm out the window, tell the driver he’s number one, and wait to see what happened, practically daring those dudes to get out of their trucks and take a swing at him.

Usually, an angry man would lean out the window and shout, “Get out of my way!” But I always thought it would get worse and that we might end up at the bottom of a ravine, victims of Montana’s modern logging wars. The logging issue has always been about trees versus jobs, but my friend wasn’t against either — he just wanted to protect Montana’s last stands of mature trees, including his favorites, the western larch. I told him these protests were futile. He said he didn’t have 500 years to wait around for the next batch of trees to mature.

My friend was particularly interested in preserving a stand of ancient larches that rooted themselves to a mountain near Lookout Pass along the Montana Idaho border. These trees were at least 500 years old and some of them reached 150 feet tall. They were 4 or more feet around at their bases. He didn’t think anyone else knew about those trees, not the conservationists nor the loggers. He made me swear their location to secrecy and said any breach would be punishable by death. He liked looking at these trees as much as the next person, but he was especially interested in the habitat they provided for elk and other wildlife, which directly influenced his archery hunting success each fall.

I, too, am aware of a correlation between mature larch and successful elk hunting. If you are a hunter you know that feeling, moments when you suddenly expect to see an animal, even though you haven’t seen one all day. Your senses go on highest alert, your vision and hearing working in unison, trying to detect movement or a sound that tips off the location of an animal. This happens often in mature larch forests where trees may be bare of limbs for 40 or 50 feet up their trunks. This allows hunters to see clearly for 100 yards or more in front of them, an anomaly in western Montana where a thick, brush-laden understory often keeps animals hidden from view until a hunter is nearly on top of them. When that happens a hunter typically sees nothing more than an elk or deer derriere as it quickly exits the scene, something that definitely adds insult to the injury after having climbed a miserably steep mountain only to have blown your chance for the day, and maybe a season. In a mature larch forest, at least a hunter stands a chance.

Larches hold additional appeal, this one apparent to hunter and non-hunter alike: They are western Montana’s glory tree of the fall; a straight, tall, pyramidal-crowned conifer that sees its needles change from green to an iridescent and brilliant yellow in late September and throughout October. Because larches grow in proximity to the dark needled spruce and Douglas fir, their yellow needles, especially in sunlight, seem to leap off the forest’s canvas. In November, however, the larch sheds its needles, one of only a few conifers in the world to do so. After that, western Montana’s forests turn a uniform shade of dark green, mixed with bland, needleless larches that could have been lifted from the pages of The Legends of Sleepy Hollow and dropped straight onto the side of a mountain. Which is problematic.

That’s because larch is a highly valued firewood: an easy splitting, hot burning and crackling fuel that many Montanans rely on during the cold winter months. Because the larch looks dead, many live larches are sawed down each year, the collector only realizing their mistake when they spark a match at home and watch that wet wood smolder in their fireplace. It’s a mistake that isn’t made twice because dry larch is a dense wood that’s a treat to light and it burns evenly and, correctly ventilated, hot through a full night.

Back in my college days a friend was delinquent in gathering firewood, mostly because he’d spent all his free days in the field hunting deer, elk and pheasant. By late November he was desperate for firewood and had found a stack of bone-dry seasoned larch and pine rounds that may or may not have been located on private property. He said they were “sort of sitting in an undefined portion of the forest, right next to the road, and not in site of any houses.” He figured he could get the entire stack in the bed of his pickup in about 20 minutes. The next day — shazam — he had an instant winter wood supply next to the front door. Problem was this: he’d replaced the wood pile with the skeleton of a deer he’d shot, only realizing that he’d left his tag attached to the mess when a warden showed up at his door the next day. I think he paid a few hundred bucks for the wood, plus a littering fine, making that cord of larch and pine the most expensive in history.

As trees go, you have to be impressed with the western larch: It’s the inland Northwest’s fastest growing conifer; its thick bark makes it more fire and insect resistant than other species; and the straight, strong and slow decaying timber it produces is preferred for telephone poles, railroad ties and, most importantly, for structural support in mine shafts. It ranges through southern British Columbia, western Montana, northern Idaho and into central Washington and Oregon. It’s typically found between 3,000 and 7,000 feet in moist mountain ranges and can withstand winter temperatures that dip to minus-50 Fahrenheit. To grow old it has to withstand forest fires and the advances of grizzly and black bears, which love to rip up the lower portions of these trees by rubbing their backs against the trunk or chewing and scratching the bark right off of it. Ospreys and eagles make their nests in broken crowns, and woodpeckers and other birds call the larch home, too.

Despite its resilience, western larch has decreased by up to 72 percent throughout its range since the 1950s, a direct result of rampant logging, fire suppression and being outcompeted by other trees, including Douglas fir.

While most western Montanans are familiar with larches, many people still mistakenly call them Tamaracks. Tamaracks, however, are native to the eastern U.S. and northern Canada, and are nonexistent in Montana. This misidentification is even seen on the commercial
level, the best example being the naming of a popular brewing company, Tamarack, which has super-popular restaurants in Lakeside and Missoula. When asked about the origin of the name an employee told me that “tamarack” refers to all those beautiful, golden trees you see in Montana during fall. I said, “Oh, you mean larch.” They responded, “Say what?”

Tamarack Brewing Company uses the straight and perfect silhouette of a larch as their logo and the larch’s profile is used elsewhere, too. In fact, you might recognize the larch on Oregon’s license plates. When that license plate was first designed, however, the larch was depicted in its golden fall hue. Unfortunately, many Oregonian’s complained about the “dead” tree on their license plates and the state switched from that fall coloration to the tree’s spring and summer coloration, dark green.

If you want to see Montana’s mega-larch, you should drive to the Seeley Lake area north of Missoula and take a hike through the 250-acre Jim Girard Memorial Grove of larch trees. This stand is comprised of numerous giant larches that average 600 years old, and it includes the state’s largest documented larch — a 1,000-year-old, 153-foot-high mammoth with a 22-foot circumference —  nicknamed “Gus.”

If you’re looking for a fall color drive, just head west of Missoula on I-90 to the St. Regis area. From that town to the Idaho border you’ll see larches galore, all coloring the mostly green forest with their brilliant yellow needles. In addition, you can drive almost anywhere in western Montana, from the southern Bitterroot Valley all the way to Glacier National Park, and see the larch painting Montana’s mountainsides.

Another larch viewing option is to visit Lookout Pass and, weather dependent, ride a bike over the 13-mile long Hiawatha Trail, which begins in Montana and descends into Idaho’s St. Joe River drainage. Along the way you’ll ride through eight tunnels and cross seven high trestles. And most of the time you’ll ride below mountain slopes littered with one of the Northwest’s most interesting, commercially valuable, and colorful trees: the western larch.