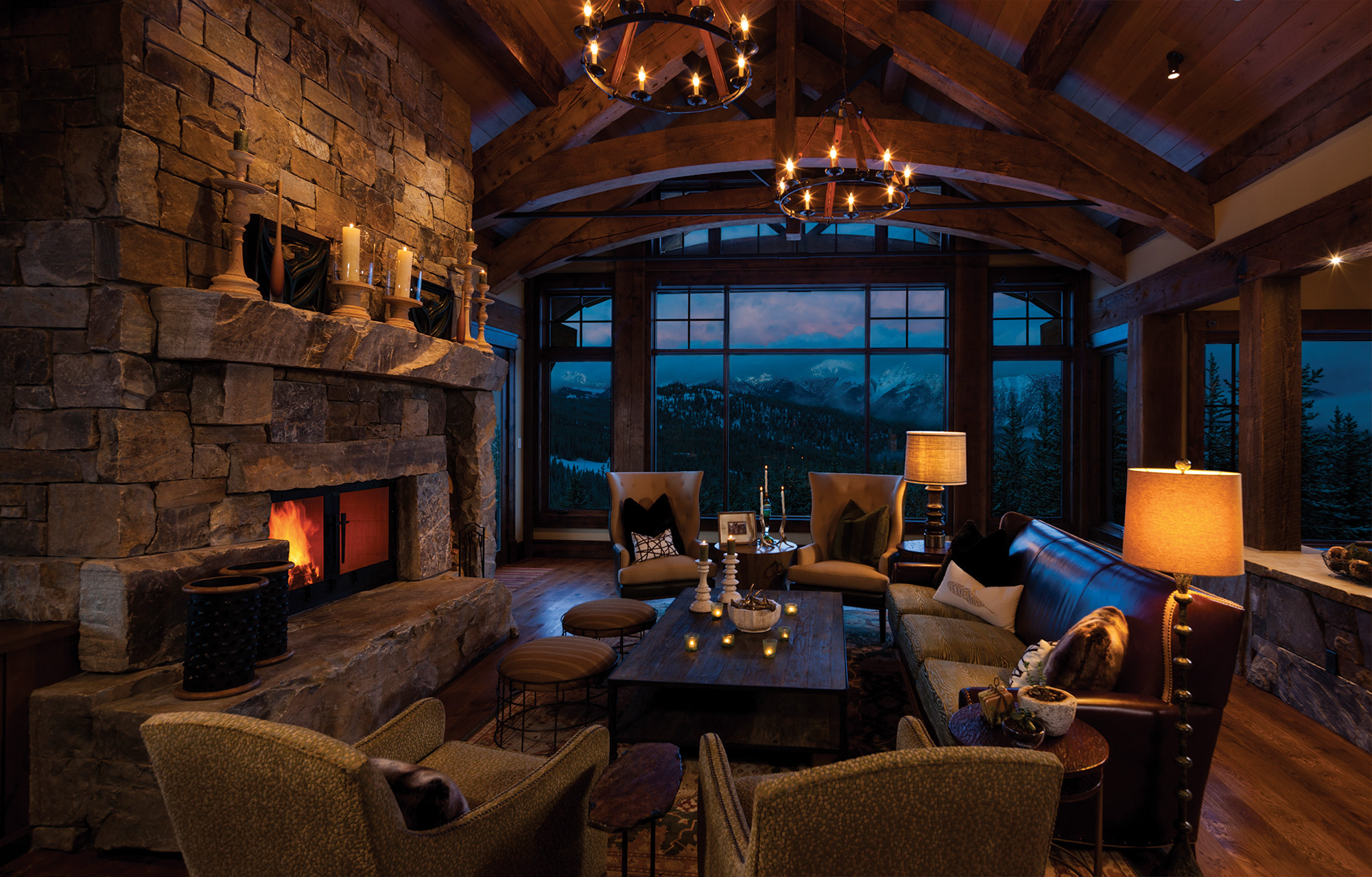 WHEN DETERMINING WHERE TO BUILD a 6,600-square-foot home in Big Sky, Montana, architect Reid Smith and builder John Seelye brought a ten-foot-tall ladder with them. It didn’t matter that it needed to be grounded in the snow. Or that they were snowshoeing through the woods, dragging this cumbersome thing behind them. They set up the ladder and peered through pockets between the trees, determined to find the best placement for the home’s great room. Ultimately, the spot where their client would eventually sit and take in the panoramic view of the Spanish Peaks.

Standing in the completed house today, Smith recalled, “We basically were down below on a 10-foot ladder and I was terrified it was going to fall, holding this thing in the snow. And then the owner was standing on top of the ladder while we were holding it and he said ‘I would love it if the great room was here,’ and we worked from that point forward.”

From that site visit the home’s design unfolded organically, Smith said. The expansive view was the anchor, but capturing it wasn’t only about the home’s orientation on the site, it also needed be to achieved architecturally. Smith designed the great room as “an appendage,” which was elevated above the tree line for lateral views that span the open floor plan, allowing the landscape to be visible from the great room, dining room, kitchen and front entry.

“The homeowners had an emphasis about being in the living area a lot of the time, so we pushed this area out so that they were able to look out from the end and the sides as well,” Smith said. “And they were able to see around the trees.”

The seven-bedroom and nine-bath house is a mountain-style home with contemporary twists. Stylistically, it was designed with strength in mind. It’s well anchored to the landscape, blending in with its surroundings. The home includes refined rustic details, such as the timber-peg joinery in the great room, and there are also industrial components throughout, found, for example, in the triangular webbing of the great room trusses and in light fixtures, especially the large fixture that was designed by interior designer Erica Jennings of Carole Sisson Designs and manufactured by Fry Steel and Woodworks. Made from iron and rope, the fixture is a focal point at the home’s south end and is wrapped by a staircase leading to the second floor and basement.

“Sometimes that industrial look goes antique because you can see the individual components and it’s very broken down,” Jennings said, noting that all of the artwork is vintage. “[The homeowner] loved to antique, so we had so much fun trying to create pieces that had a little of that flare.”

The home’s interiors focuses on function and an organic contemporary style, which uses natural and indigenous materials but in a cleaner manner. Neutral colors and rich textures add cohesion throughout.

In addition to the view and gathering spaces, the homeowners also requested private areas where they could retreat. “There’s definitely an emphasis on the main living area and having those views but then as you go back into the house you see there are all sorts of pockets,” Smith said, giving examples of hidden nooks for bunkbeds upstairs, the office that is accessible by bridge and a sunroom located off the master bedroom.

“We really try to capture the essence of the client and the property and then just let it develop organically,” Smith said. “I don’t come with a prescribed design approach. There are things like views and open living that seem to be something that people will want, so there are some basic elements we try to do, but from a stylistic standpoint we wanted something that had a rugged quality, but then some sophistication to it that used materials that are natural and appropriate for the sense of place.”

Builder John Seelye said the home’s success was in part due to the collaborative nature of the project. “For us, the most successful projects are when the owner, builder, architect and designer all get on board at the same time during the design phase. We’re all part of that cohesive evolution of concept because we are all talking from the very beginning, from the time we are snowshoeing into the site to the time we’re sitting here right now.”

“Seeing how excited they were to snowshoe to that ladder, to helping design and pick out selections, and working with the architect, builder and designer and then seeing them walk in the house for the first time and then use the house — that is the best part. That’s why we do it,” said Seelye. “The view is secondary.” 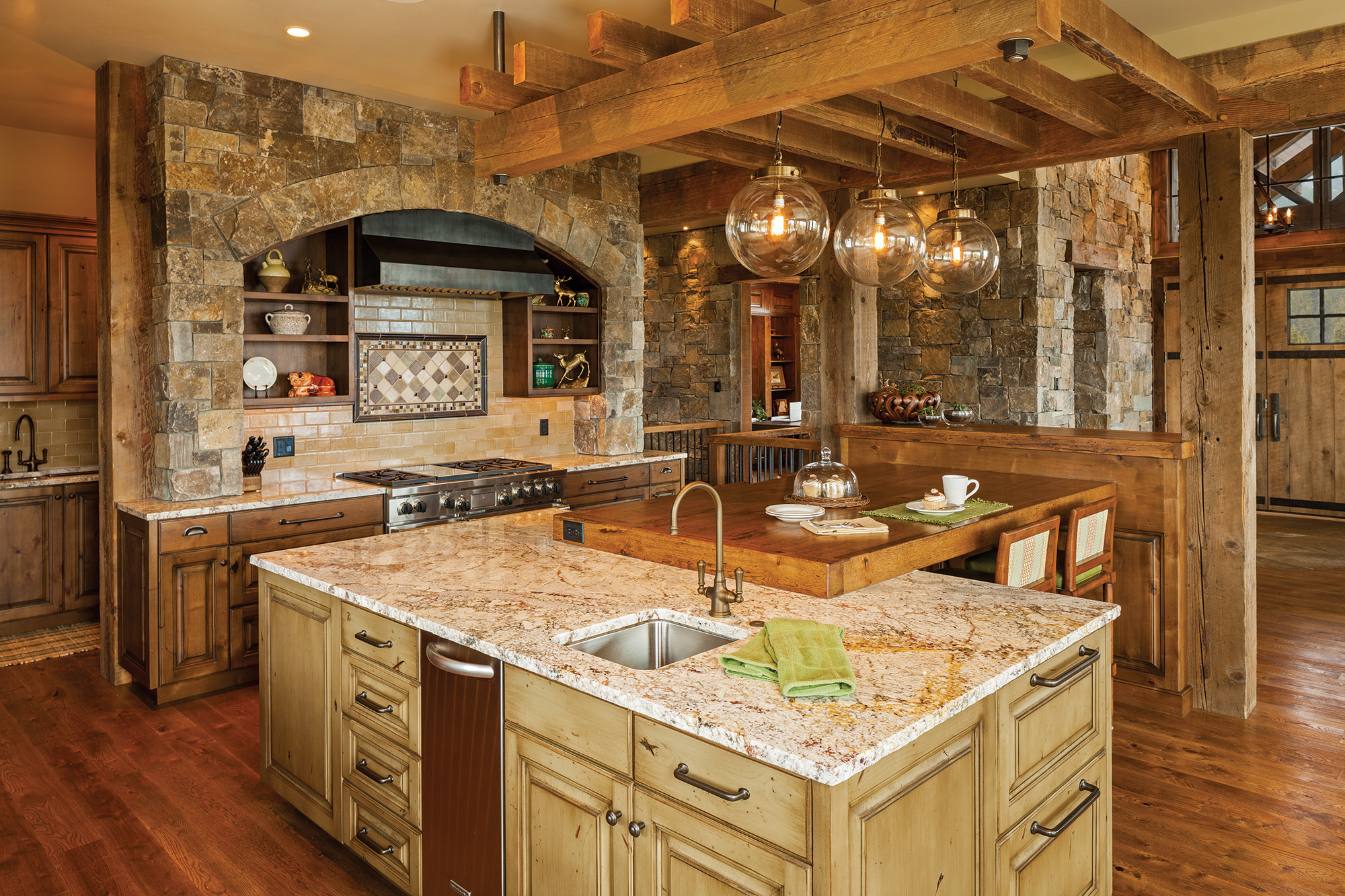 Reid Smith designed a bar-like table top to intersect the island in the kitchen. This is both unique and functional, Erica Jennings, interior designer, said. “It’s a tremendous detail on Reid’s part.” 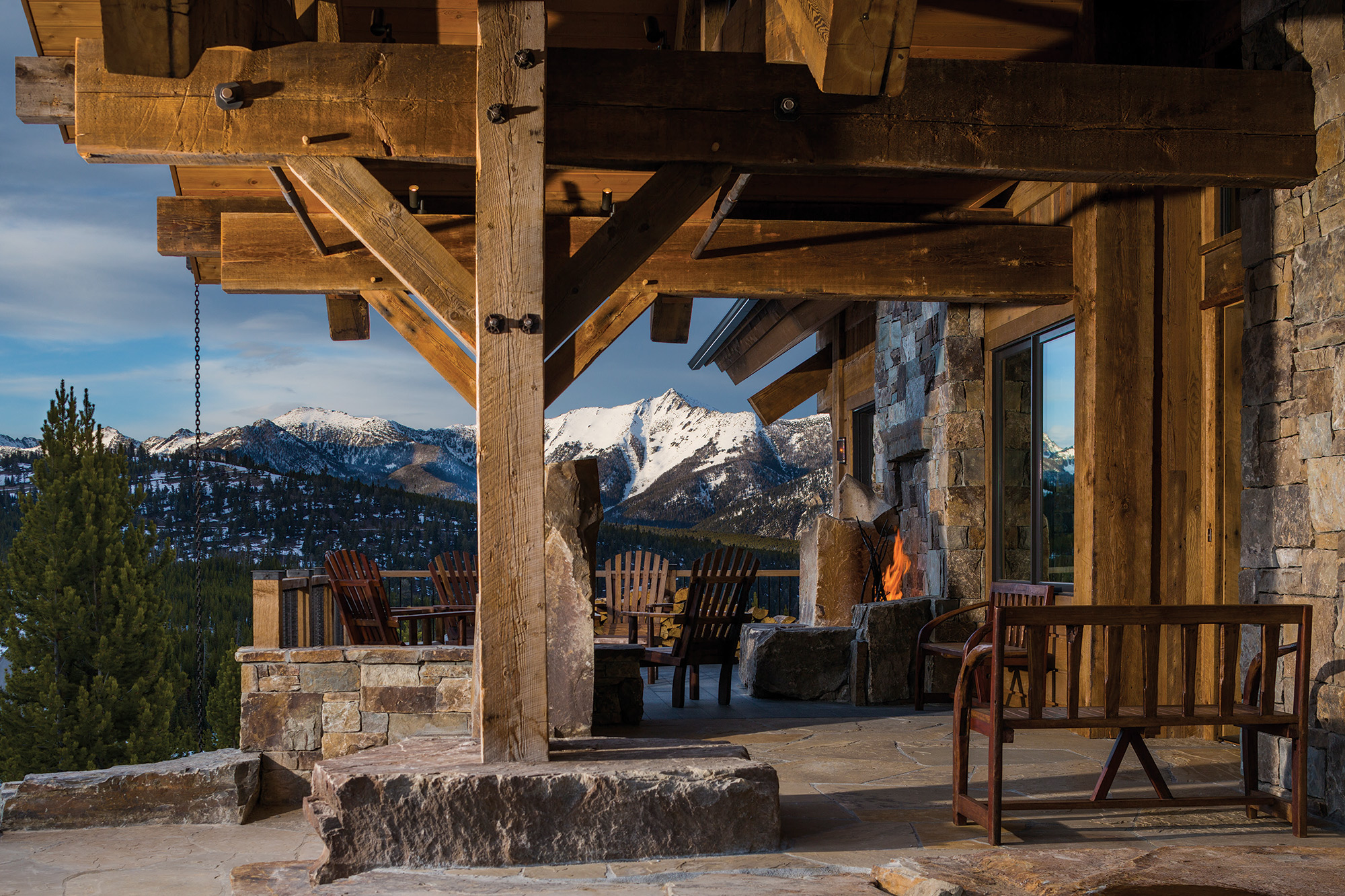 Plenty of outdoor spaces, such as patios and balconies, ensure that the view can be enjoyed year round in the fresh air. 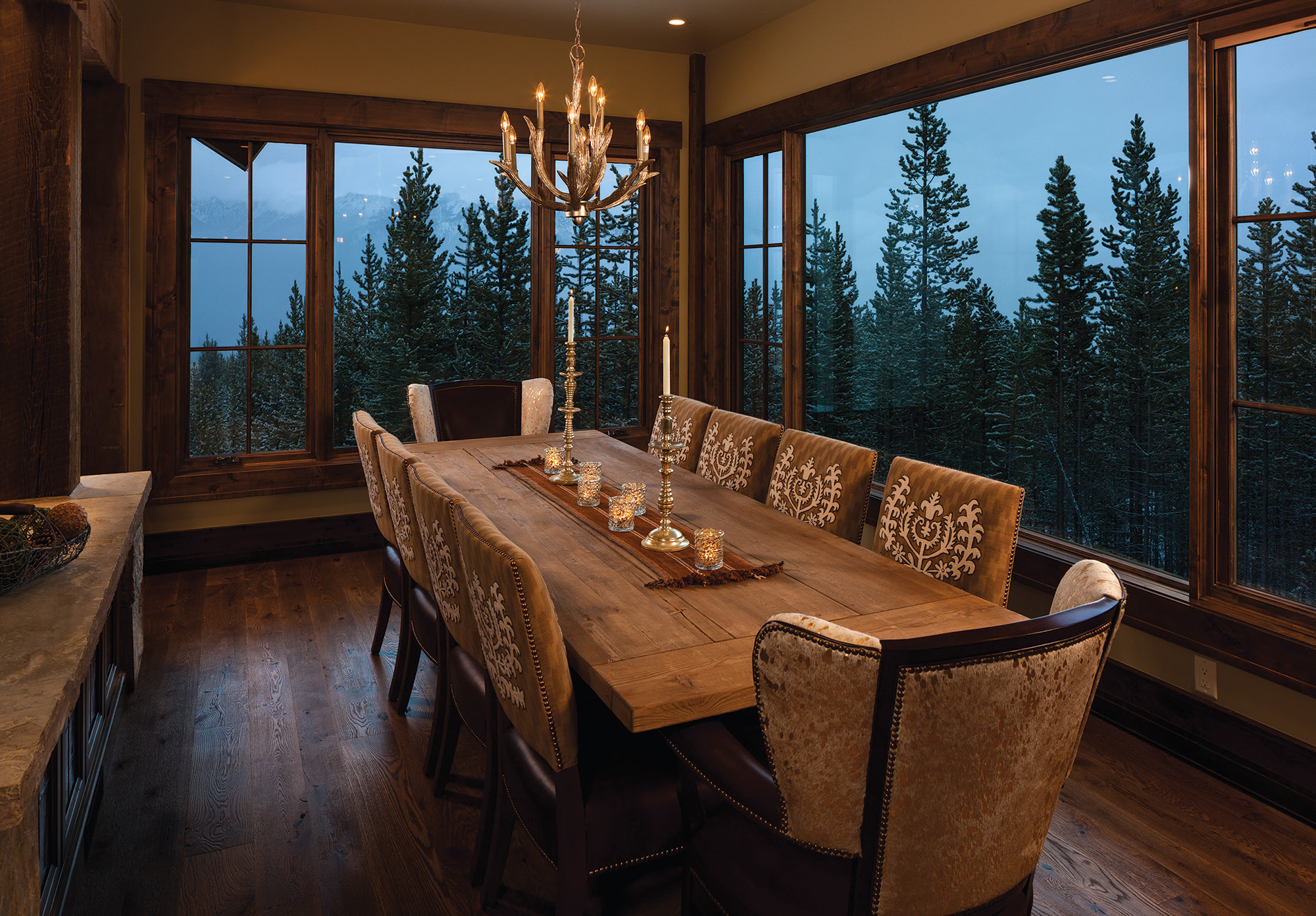 The dining room is located off the great room. Large windows frame the view, which is visible from any seat at the table. 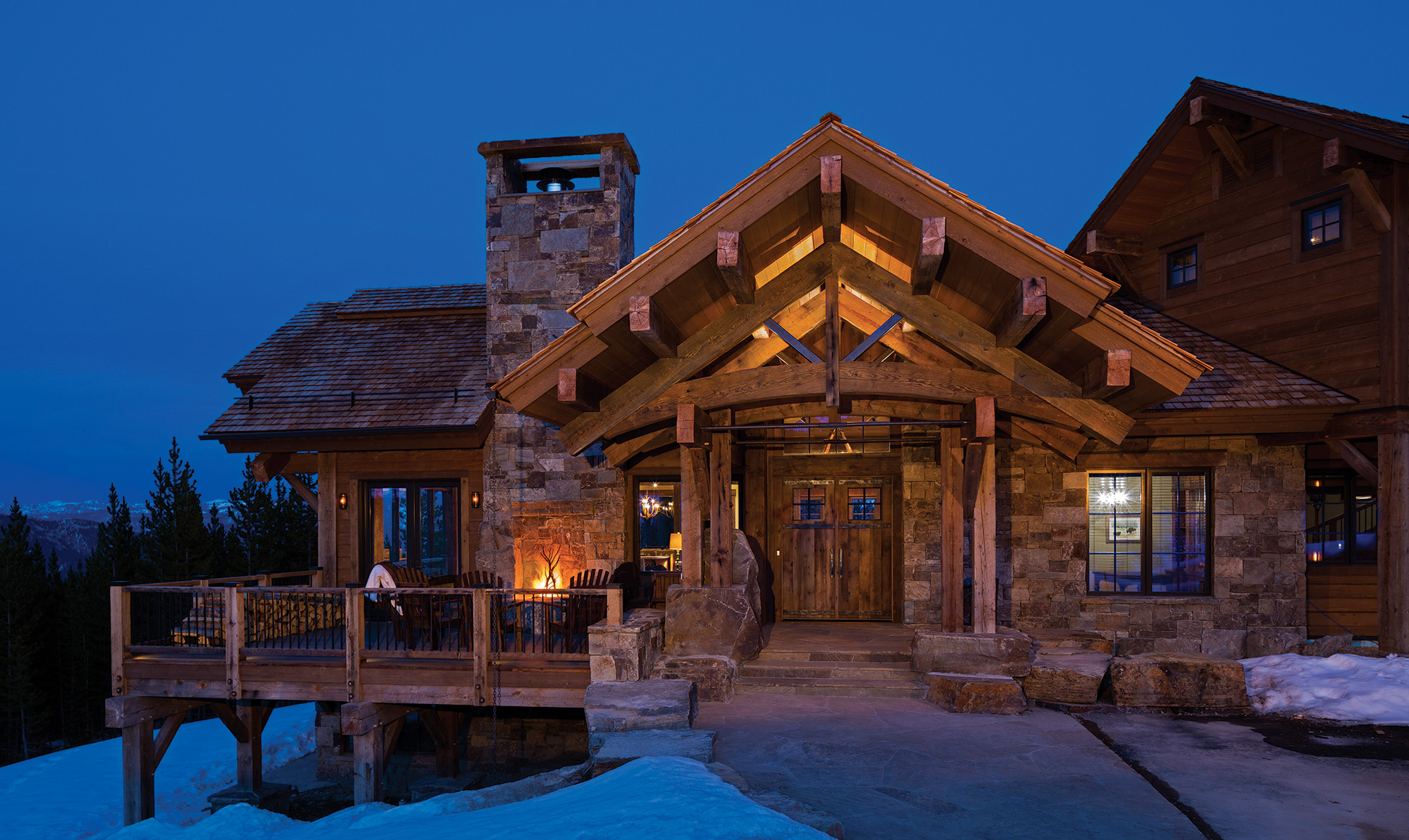 A welcoming front entry is a hallmark of mountain-style homes. 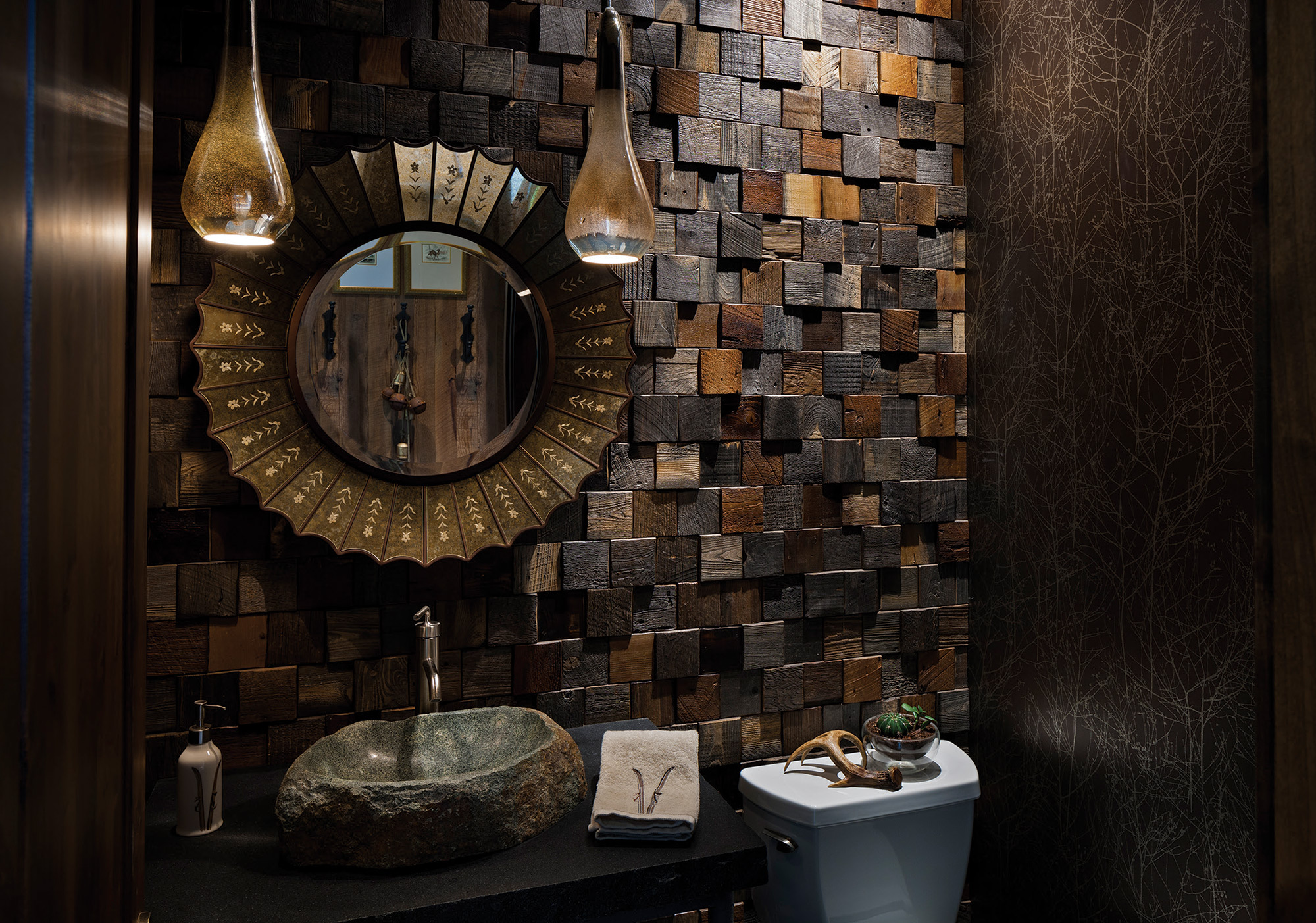 Each bedroom has its own bath. Here, a natural stone sink adds a rustic touch. 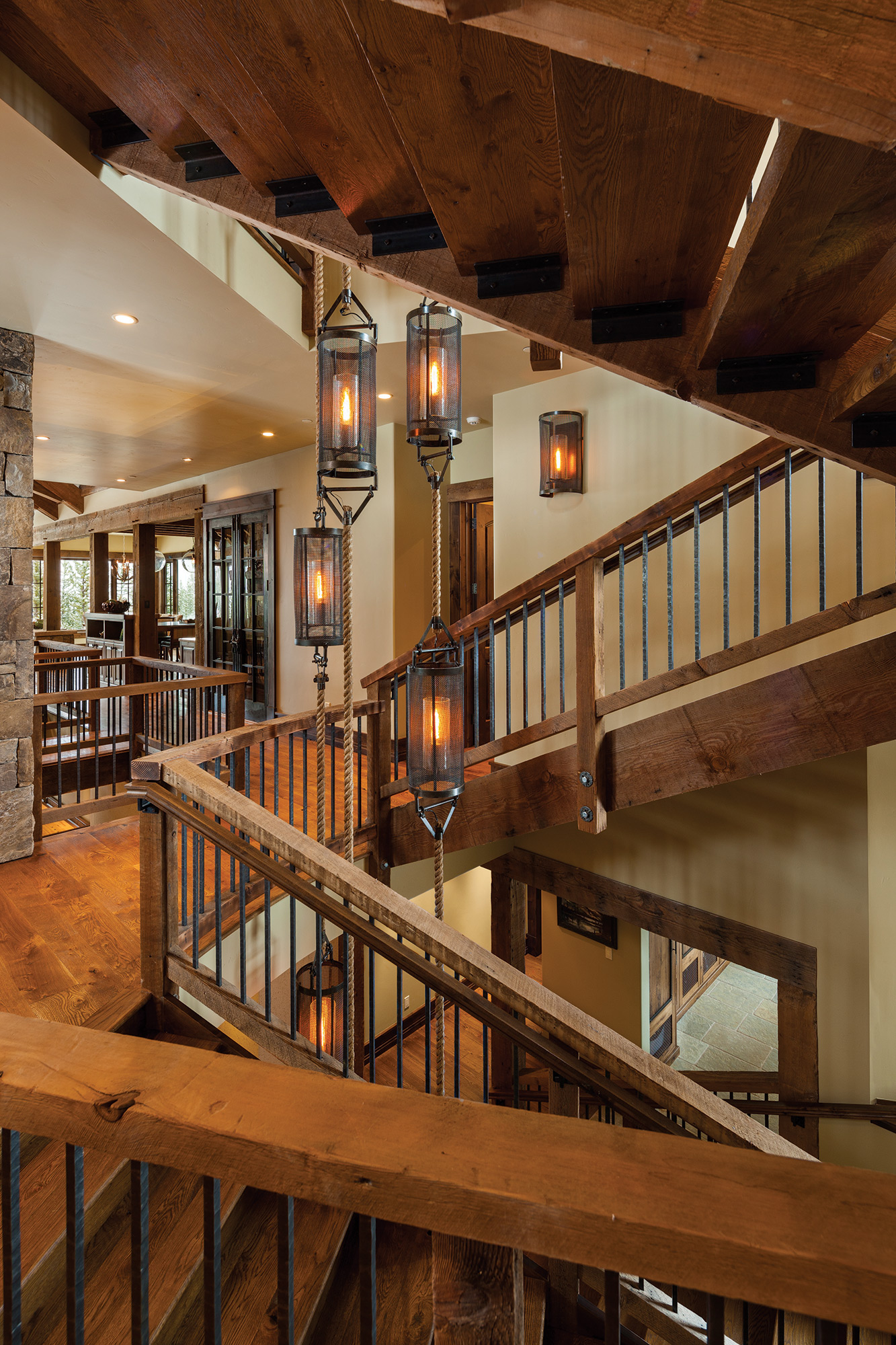 A custom-designed light fixture spans the length of the home’s three floors. 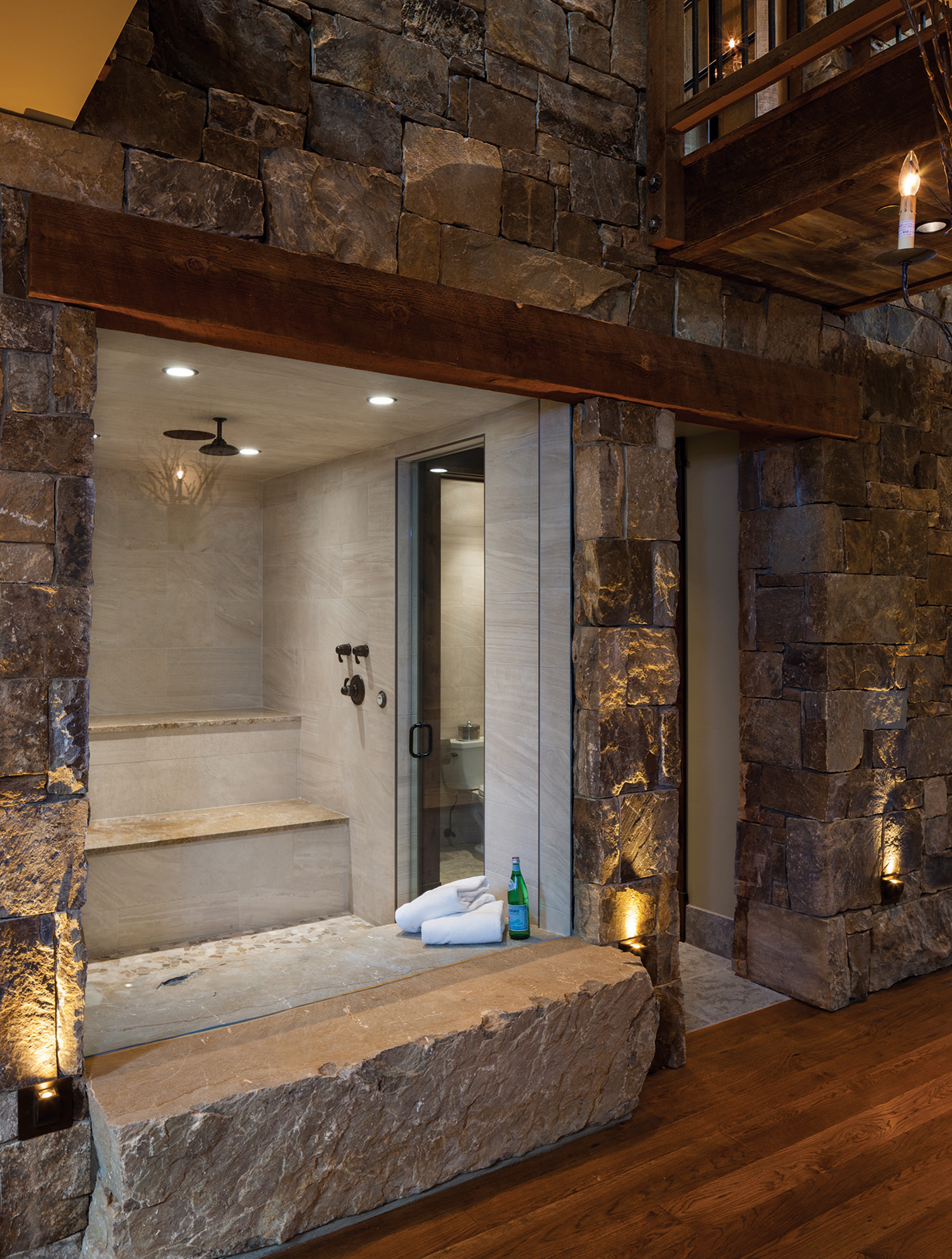 A steam room is ensconced in stone on the lower level and is located directly across the hall from the ski room, a convenient feature on a cold day 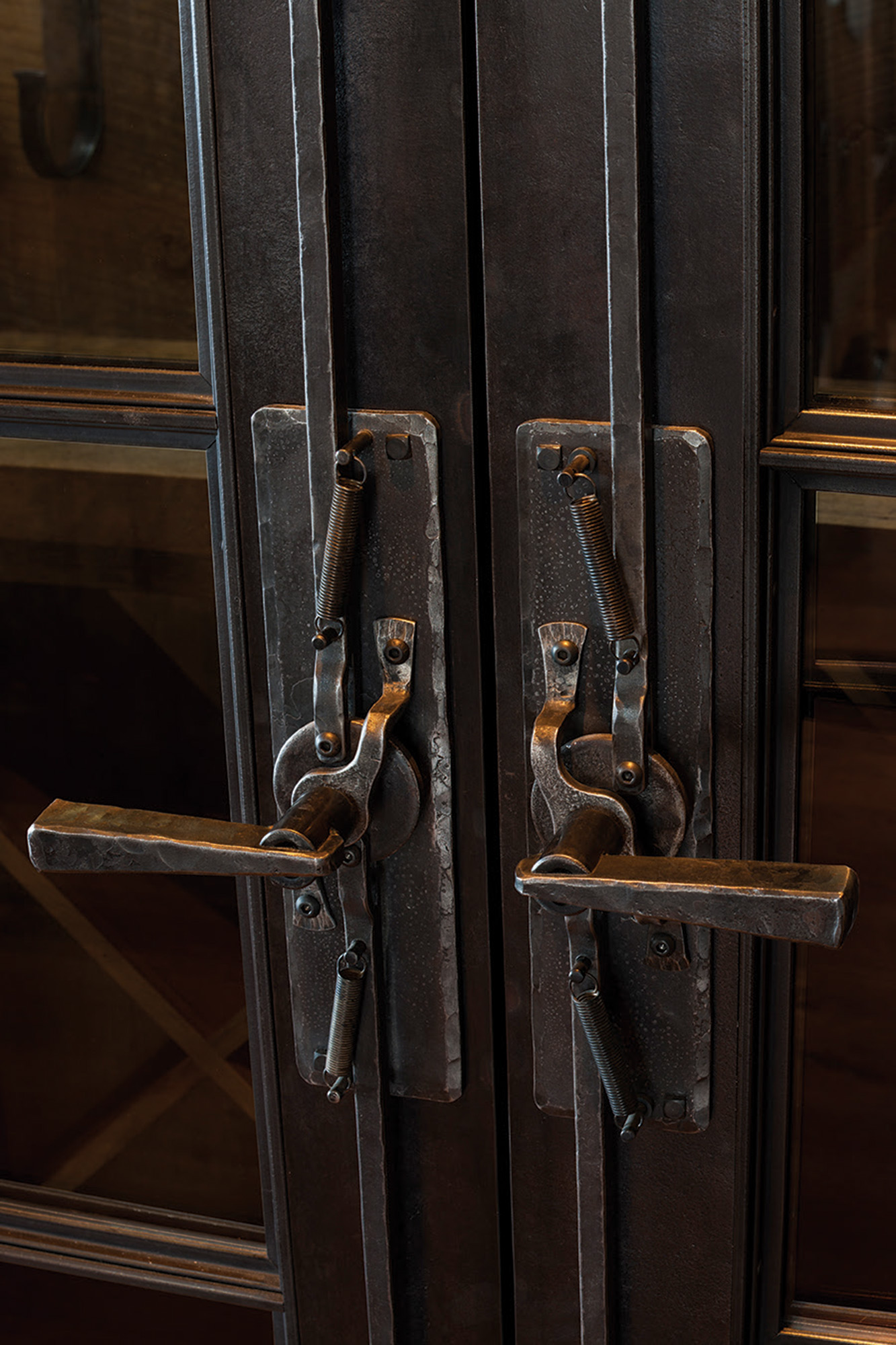 Custom designed from floor to ceiling means attending to every detail. 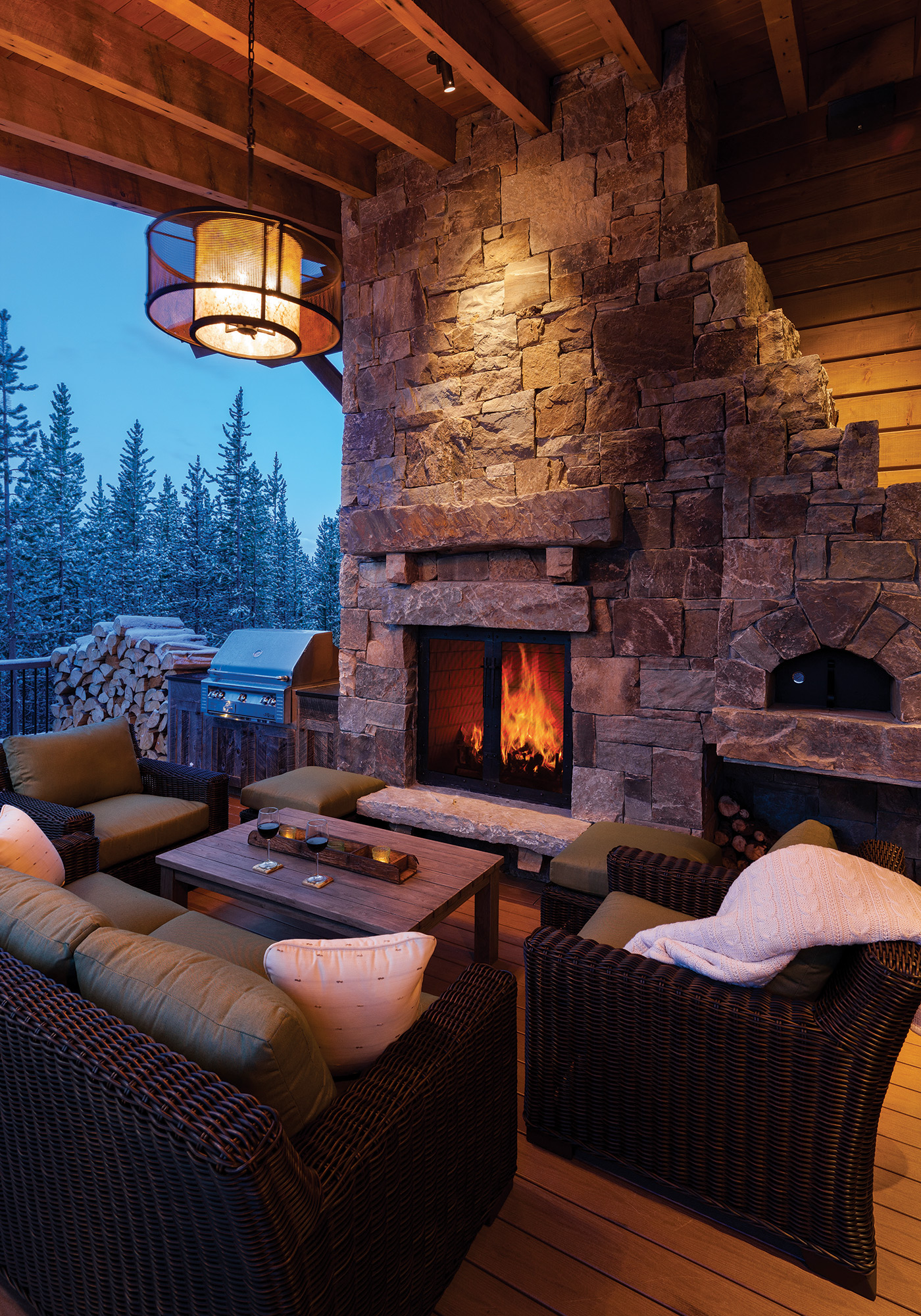 An outdoor fireplace is the perfect place to relax after a day on the slopes. “These are truly custom homes in every aspect. Every home is specific to the location, the site, the typography,” said John Seelye, the builder. 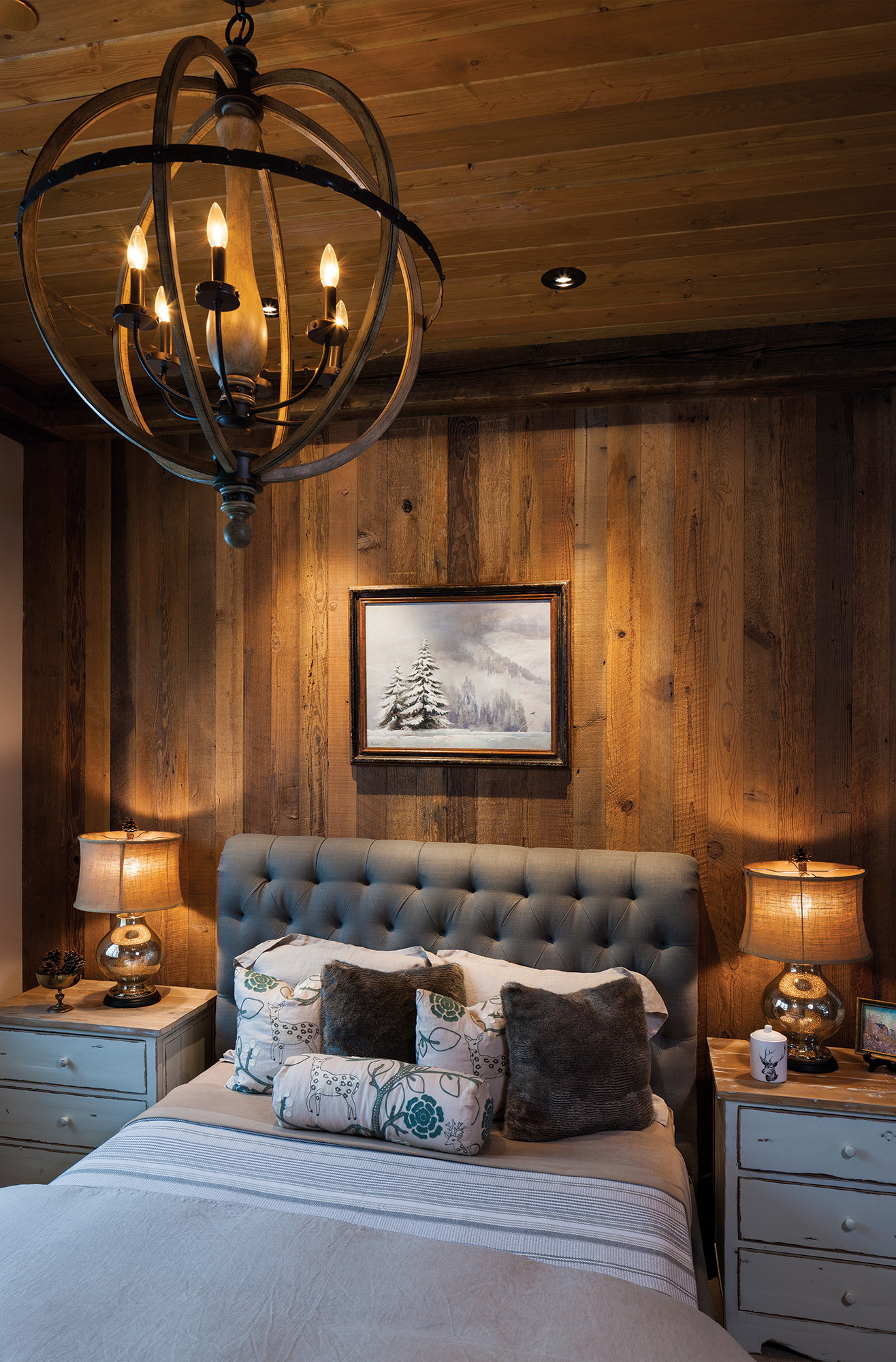 “We really strived to make this whole house very livable. There was nothing that was over-the-top showy,” Erica Jennings, interior designer, said. “It was designed so they could feel like flopping down after a day of skiing.”