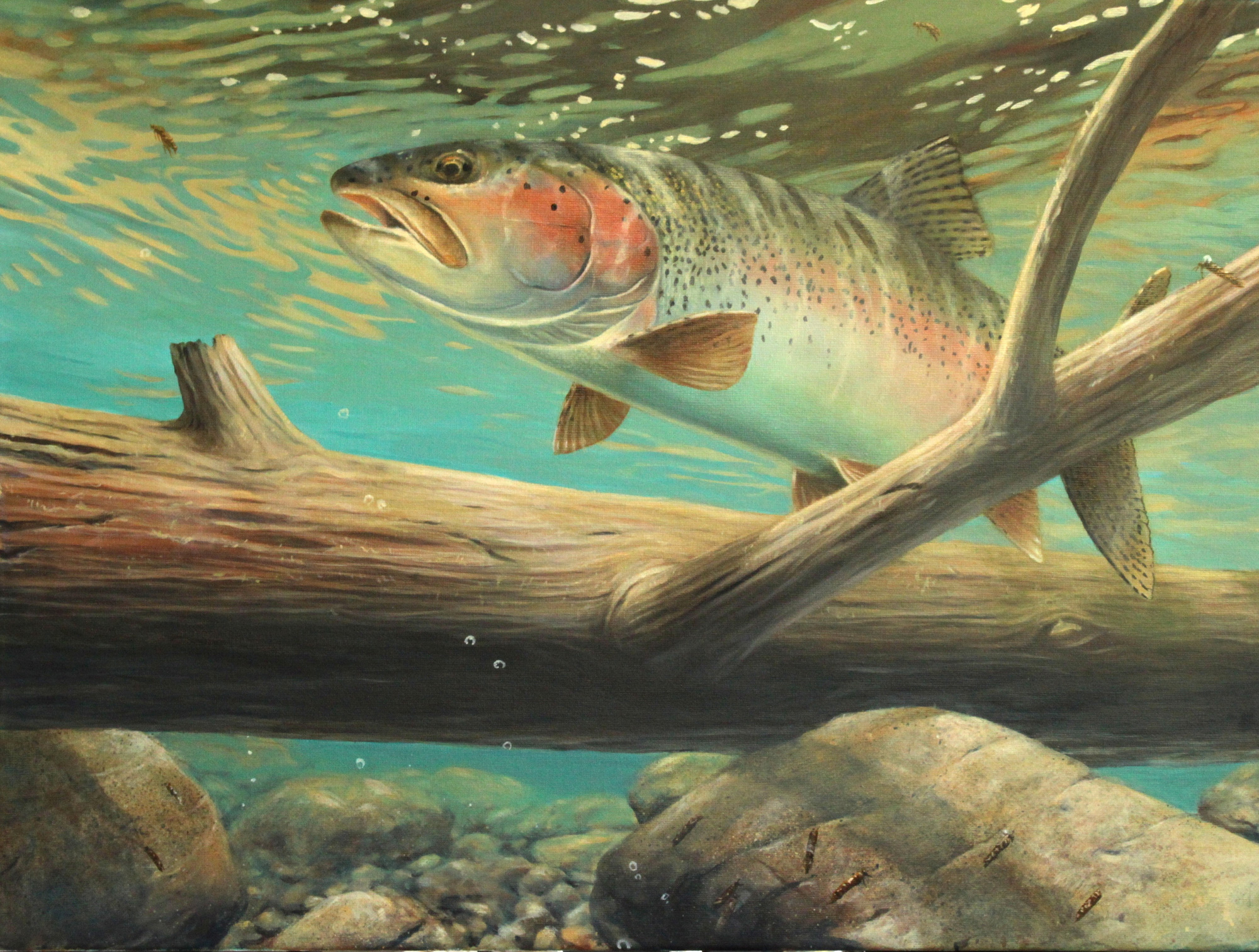 23 Jul Outside: On Your Own

in Summer 2011 | Outside | Written by Greg Thomas | Illustrated by Fred Thomas Posted at 16:49h 0 Comments
Share

If it has to be an argument I’d say Montana has more quality public trout water than anywhere else in the West. That’s especially true if you like large streams that cater to fishing from a raft or drift boat.

But Idaho has more sneaky, good water, located off the mainstream radar, that fits the wading angler best. One of those streams is south-central Idaho’s South Fork Boise River, which is full of rainbow trout and offers plenty of appealing hatches to match. If this stream were located in the Treasure State it would rank with the Madison, Gallatin and Yellowstone rivers for productivity and it would get promoted and pummeled like the Bighorn, Beaverhead and Missouri rivers.

But it’s not in Montana and, in the common fly fisher’s eye, all things pale south of the Montana/Idaho state line. Because of that, the South Fork retains a somewhat locals-only feel. That sensation grows when anglers learn that commercial guiding operations aren’t allowed on the river. Fish the South Fork Boise and you’re on your own. No guide winding wind-knots out of your tippet. Nobody standing over your shoulder saying 10 and two. Nobody fetching grocery store sandwiches and cream sodas from the cooler. On the South Fork you blood-knot your tippet to the leader. You select flies to match the hatch. You net, photograph and release your own fish. And if you’re overnighting it, you pitch your tent, build your fire, cook your food, clean your dishes, and haul out your own garbage. If a black bear, coyote or rattlesnake gets too close to the tent, you take care of that on your own, too. To fish the South Fork Boise you better be self-sufficient or you better not visit in the first place.

The South Fork begins about 70 miles east of Boise in the Smokey Mountains north of Pine. It’s a small freestone at its headwaters and hosts rainbow, bull and brook trout through that section. The river really comes into its own below Anderson Dam where tailwater flows encourage quick growth rates and offer ‘bows that stretch between 14 and 20 inches. That tailwater stretch is paralleled by a dirt road for its first 10 miles, with unlimited public access, then it cuts into a remote canyon and courses for 16 miles to Neal Bridge and Arrowrock Reservoir. The top 10 miles hold more trout than any other section of the river, but the canyon offers the largest fish (up to 30 inches) and it calls to the adventurous among us with two major rapids, including one that’s called Devil’s Hole. The reward for taking on that big water is unpressured fish in a classic western setting, minus the competition you might find upstream on summer weekends. And, there is competition; remember, the greater Boise area hosts 500,000 people, of which a percentage are anglers.

The South Fork isn’t a giant stream and in most places it can be covered by a long cast. But it is big enough to float, even on the upper 10 miles between Anderson Dam and Danskin Bridge. While there aren’t any giant rapids on the upper reach, it’s tight and technical, with narrow side channels and downed trees keeping oarsmen on the sticks. In May and June, when the river sees high flows, it may cruise along at 3,000 cubic feet a second. That’s a handful even for avid floaters. Prime flows range between 1,400 and 1,800 cfs. Still, there are lots of people who test the highest flows, primarily for these reasons — wade fishing is downright difficult, if not truly dangerous in high flows, and the river’s salmonfly and golden stonefly hatches come off at that time. By mid-July, flows diminish and wade fishers reach most of the promising water, covering pink Albert emergences, major caddis blitzes, and pale morning dun hatches. During fall, fantastic blue-wing olive (also called Baetis) hatches occur. By November you can mix midges in with those blue-wings for a small-fly smorgasbord. Interestingly, the South Fork often sees blue-wing hatches through winter, myself having encountered excellent emergences in February. That’s much earlier than you find on many western streams and the fish really key in on those bugs. That can be said about most hatches; I’ve seen those big rainbows spread across an entire riffle lazily sucking down caddisflies; I’ve seen 20 or 30 fish in a pod, rising to blue-wings along a far, cliff wall; I’ve watched dozens of fish eating PMDs off a granite slab at Indian Rock; and I’ve even seen them eating every unfortunate cicada or grasshopper that I threw on the water.

For Boise area anglers, the South Fork and its rainbow trout are a natural draw, something different from the brown trout they often chase on Oregon’s Owyhee River. For anglers traveling in from other places, the whole do-it-on-your-own, unguided mentality probably provides a roadblock. They may ask, “Where to stay?” which is a legitimate question; there are no posh fly-fishing lodges located along the river. No rustic cabins either. In fact, there isn’t a grocery store within 30 miles. No gas stations. No nothing! If you run out of provisions, whether that’s whiskey, beer, flies and tippet, or even food, you’ll have to drive out of the canyon and make a 30-mile jaunt to Mountain Home. And then you have to drive back to a canyon that is so deep and remote that, if I recall correctly, cell service isn’t available. And Wi-Fi? Get real.

In many ways, at least for me, that is the true appeal of fishing the South Fork. Sure, the rainbows are great, and they are often big, and they eat bugs off the surface like crazy, but I don’t leave the trout-saturated state I live in, and drive 500 miles south, to catch another rainbow trout. I visit the river as much for the remote locale, the rustic tent camping, and the legitimacy of the anglers who fish the river as anything else.

And my affinity for the South Fork isn’t because I don’t like fly fishing specific lodges and technology. In fact, I’m the quickest to tap into complimentary cocktails, and I appreciate indoor plumbing. Breakfast served at 7 a.m.? Yea, I’m down with that, too. And, really, I don’t mind someone fetching that sandwich and soda for lunch. But, when actually fishing, I like the bare minimum so nobody can reach me, and I can’t reach them, and anything that happens in the world will have to do so without me being aware of it. I like it that way for my angling companions, too. Basically, I resent the cell phone and text messaging when I’m on the water or camping near it and prefer that time to drink, smoke and converse, all those things that are either politically incorrect or just plain devalued these days.

That’s one reason why I like fishing with T.R. McCrystal, who I met while living in the Sun Valley area back in the mid-1990s. He’s now the proprietor of a high-end restaurant, Jen’s Garden, in Sisters, Ore., and he’s a great conversationalist. And, like me, he has two daughters. We don’t fish as much as we used to, but we meet on occasion to trade parenting notes, to laugh and drink and kick embers around a campfire. And the South Fork Boise, which is located about halfway between our homes, is the natural place to do just that.

The last time we met on the South Fork I brought a chainsaw, but no axe or maul. We had to split giant rounds of cottonwood by smashing them on a rock. We built a massive fire and huddled around it for half the night, discussing business ideas, the antics of kids, the challenges of marriage, and the merit of the South Fork’s rainbows. We took photos of ourselves jumping the campfire then capped a bottle around 2 a.m. I crawled into the back of my truck and T.R. scurried into his tent. In the morning we were covered in 4 inches of fresh snow and nobody wanted to cook breakfast. We rock-papered-scissored and T.R. lost. Which was good for me because T.R. is the master chef. Shortly, he was pouring coffee out of a French press and doling out portions of an egg, cheese, marinated pork and spinach omelet. We sat in the front seats of his FJ Cruiser, with the heat cranked and ate. I said, “I’ll rock-paper-scissor you to see who does the dishes” and he replied, in classic, Bordainesque fashion, “F-off.”

That day we counted at least 50 mule deer on the surrounding slopes, munching grass near the top of the canyon. We listened to chukar partridge screech out warnings whenever we approached the river. We jumped ruffed grouse while pushing through willows, trying to reach a productive side channel that’s out of sight from the road. We kept our eyes open for black bears, which I always expect to see while fishing the South Fork, but to date have never spotted.

Around noon a real nice midge and Baetis hatch appeared and the fish, on cue, started parting the surface. We drove from one spot to the next, always with the heat cranked and the coffee flowing, looking for rising fish. In some places we found one or two snouts working the water. In other places, such as Indian Rock, a dozen or more big trout rose in sequence. T.R. landed a 17-inch brute off the rock while I photographed from overhead. I nailed a nice rainbow just below the dam, and then T.R. got a couple modest specimens downstream near Danskin Bridge. At one point we stopped and examined a run where, back in the 1990s, I’d taken a 22-inch rainbow on an egg-sucking leech. At that time a 20-inch rainbow on the South Fork was almost unheard of. But something changed around 2005 or 2006 and all of a sudden, with no explanation from biologists, the river started booting out fish in excess of 20 inches and some that stretched to 30 inches. To this day, nobody has an answer for that desirable change.

Late in the day T.R. and I toyed with the idea of hiking downstream from Danskin where we’d fished years ago and had great success in a couple runs that held dozens of willing fish. But, the thought of hiking back out of the canyon, probably in the dark, was a bit much. We remembered, there was no warm lodge or cabin to retreat to; nobody would be splitting our firewood or cooking our dinners; and, besides, we’d each taken a half-dozen or more solid, jump-happy, wild rainbows. We agreed, there was nothing to prove.

That night we built another giant blaze and finished what was left of the bottle. We listened to coyotes announce their nightly hunt and you could almost sense those chukars cowering under the sagebrush. After cleaning some dishes I asked T.R., “Do you think the common person would think we’re crazy for driving 500 miles to catch a trout when we have trout practically swimming in our backyards?”

He said, “Look, we’re here by ourselves. Nobody else is fishing. I caught a bunch of beautiful rainbows today. And I’ll do the same tomorrow. Nobody’s begging for our attention. And there’s no place that we have to be. This is awesome. Who cares what anyone else thinks.”