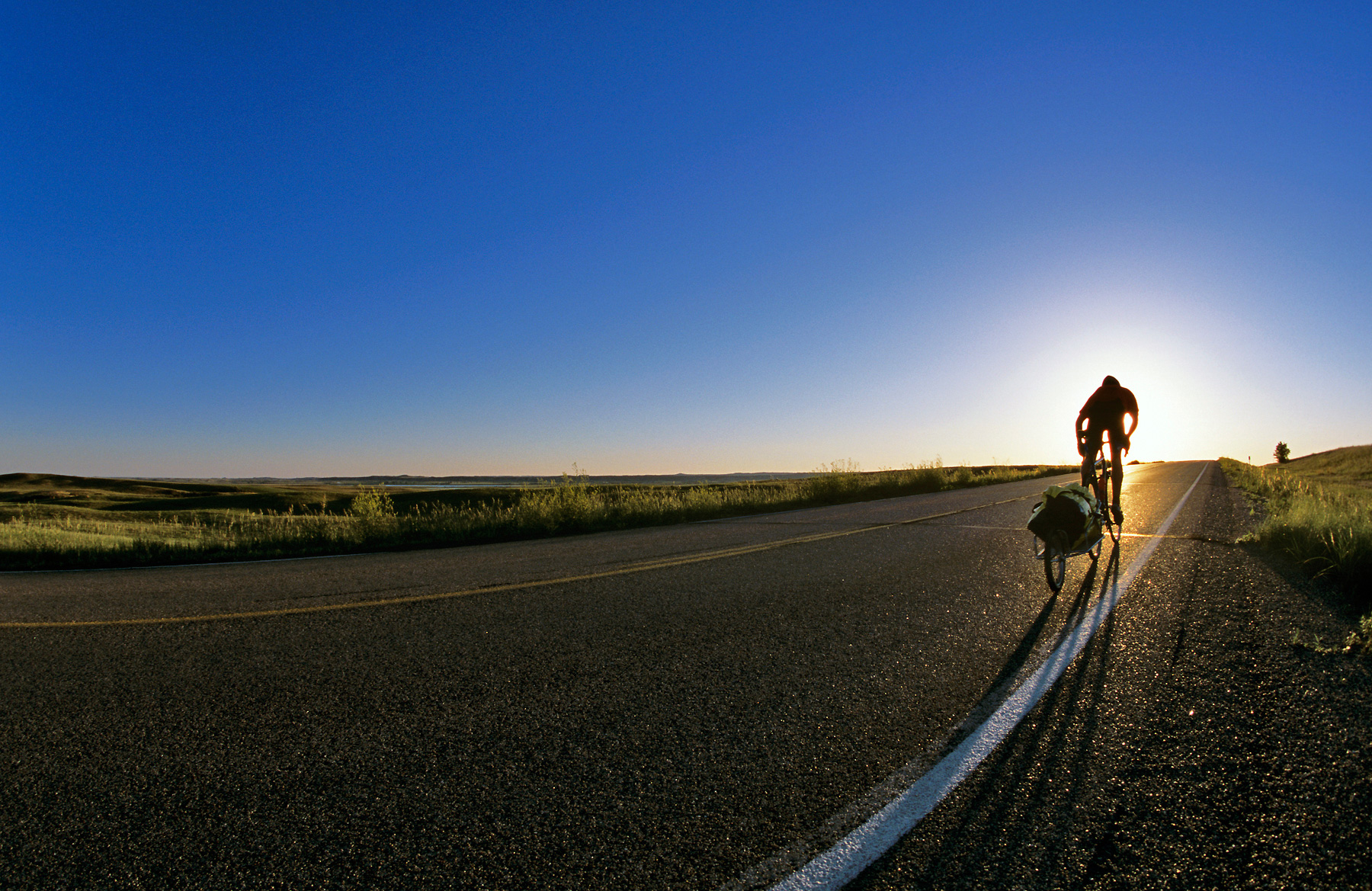 FOR THE THIRD TIME IN FIVE MILES, the three of us pull to the shoulder of the highway and tip my bike upside down, resting it on the seat and handlebars. For the third time we yank the back tire, lever it off of the rim, and fix the damn flat. It may be June, but the day is going dusky. We are on the Wind River Indian Reservation in Wyoming. The nearest community is Crowheart, another five miles down the road, and it amounts to a gas station and convenience store. We have already ridden our bikes 90 miles from our dawn start on the far side of Togwotee Pass, along the Snake River.

My teenage daughter, Ruby, helps me glue a new patch on the tube while Marypat, my wife, inspects the inside of the tire. The hole in the tube is in the same spot as last time, and the time before. Marypat bends the tire open, holds it inches away from her face, peering at the offending section. She runs her finger along the inside. The tube is patched by the time she finally looks up.

“Gotcha!” she says. She pinches a nearly invisible thread of wire out of the inside of the tire. “That’s got to be it.” We all bend over the fiberglass-thin splinter of metal on the tip of her finger.

“Let’s pop it back on and get going,” I say. “Not much daylight left and we have no idea where we’ll stay tonight.”

If there is a “hump day” on the bike trip that began four days earlier from our driveway in Bozeman, Mont. aimed for my parents’ house on the outskirts of Lander, Wyo., 400 miles away, this has been it. In the gray light of morning we broke camp along Spread Creek at the border of Grand Teton National Park, and rode toward Moran Junction. The challenge of the day was Togwotee Pass, an endurance test, never that steep, but roughly 25 miles of up. All of our bikes are a generation old or more. None of them has a granny gear. They are solid, stout bicycles; cutting edge in their day, bikes that people refer to as “classics,” when what they really mean is “antiques.”

At the top, in the heat of the day, we collapsed in some shade on the side of the road and ate oranges. It was the best orange of my life, hands down. Then, the 25-mile downhill cruise to Dubois was as delicious as the crank up had been agonizing. Wind in the face, miles whipping past, bend after bend of high-speed coast. Delicious until one of my spokes broke on my back tire, a sharp pop followed by a pronounced wobble. We limped the final few miles to town and searched for a bike shop.

Dubois has no bike shop, but the owner at the outdoor store was tremendously helpful. She called local bike experts. No one home. Finally, she called the owner of a bike shop in Lander.

“Take the broken spoke,” he said, “and wrap it tightly around the closest spoke next to it. It won’t be perfect. You’ll still have some wobble, but it should get you the 70 miles to Lander where we can take care of it.”

So it goes on the road, on bicycles. Things work out. There are problems, there is exhaustion, there are triumphant miles, rampant beauty, gritty doses of hardship, the odd trucker who blows you off the road, and, almost without fail, remarkable generosity. Face to face, when given an opportunity, people are unbelievably good.

On Day One, 35 miles from home, at the crest of Norris Hill, we rolled up on a cycle tour group with a shelter and tables full of bagels, fruit, drinks. “Come on over,” one of the guides waved us to him. “We have tons of food. Please.”

Ten miles down the road, near Ennis, Marypat’s old sewn-up racing tire went flat. “Damn!” she said. “I really, really didn’t want that to happen.” Sew-up tires involve an eight-hour repair. First, you unstitch the tire until you find the leak. Then you fix the tube, re-glue the protective strip, and stitch the tire back up, by hand. Finally, you give the glue eight-hours to cure.

Ruby and I rode on to town, where we ran into the sag wagon for the bike tour. “We’ll go pick her up,” the driver said, when we told him the situation. He deposited us at the campground on the outskirts of town, where we labored through the tire repair, weathered a pounding hail storm, and were ready to ride up the Madison River valley first thing the next day.

By the end of Day Two, near Henrys Lake, we noticed that Marypat’s other tire was going soft. “I knew I should have changed out these tires,” she moaned.

“Let’s keep pumping it up,” I said. “If it’s a slow leak and we luck out, we can make it to a repair shop somewhere, maybe in Driggs.”

The next morning the tire was flat. We pumped it up, rode to breakfast in Island Park. Miles of steaming cold, mist rising, swans on a lake, easy rhythm. Pump up again after breakfast, and then plummet down the grade to Ashton, Marypat taking it easy, Ruby and me flying. At the bottom we pumped again. All day, more than 80 miles, with that stuttering pattern. Ride an hour, pump again. Down into valleys, up the steep grades, past potato fields, facing into the shimmering views of the Tetons. Lunch in the shade of a grain elevator. Pump again.

Late afternoon, in one of the bike shops in Driggs, Marypat was determined to change out her tires.

“I hate being the weak link,” she said.

The bike mechanic was more than willing, but had nothing in stock to match her old bike. He directed us to his competitor, another bike shop around the corner. She led her bike out the door.

“Where are you spending the night?” he asked me.

He dialed a number, explained our situation. Hung up. “He said you can camp up in the meadow behind the BMX track,” the mechanic said. “It’s just a few blocks away. No one will bother you.”

When I caught up to Marypat, she was deep in problem-solving mode with mechanic number two. He didn’t have rims to match, either, but thought he might have some at home that would work. It would be mid-morning before he could finish. Would that be okay? There’s a great restaurant on the way to the BMX track, he told us. And a coffee shop just down the street where we could watch World Cup soccer in the morning. He promised a repair by 10 a.m.

Like that. Call it serendipity, karma, coincidence, patience and flexibility, maybe openness to possibility. Combine it with the kind of invisibility that cannot be accomplished with a vehicle and its trappings. On a bike, when you want to, you can disappear. In Driggs, after dinner, we vanished behind the racetrack, spent a sweet night under the stars, and reappeared with a credit card at the bike shop the next morning.

Or the next night, near Moose, where we stopped for a burger and ran into a Snake River raft guide. “You don’t want to deal with Park Service campsites,” he said, after we told him where we were heading. “Here. Check this out.” He pulled out a detailed map and spread it on the table, weighing down a corner with his cold beer.

He put his finger on a spot between Moose and Moran Junction. “Right there,” he said. “The Forest Service boundary comes to the road at Spread Creek. I bet you could pitch a tent in the trees just off the road and no one would be the wiser.”

He was right. Not only could we slip unseen into the woods 50 yards from the road and the long arm of park service bureaucracy, but we could wash up in an eddy under the highway bridge, butt naked, with cars whooshing by a couple of feet overhead.

BACK IN DUBOIS, we wrap the spoke as instructed, wash up in the rest room, and go out for dinner. It has been a long day already, but we have hours of pastel sunset left. The wind is calm. We have no interest in a motel or the KOA. We mount up.

The evening is lovely. The Wind River accompanies us downhill. Miles click by. A couple of potential campsites come and go. My wheel wobbles, but seems stable enough. It gets late. I get my first flat. We fix it. Two miles later it happens again. The loveliness of the warm twilight fades in the chain grease and frustration.

Crowheart rises in the distance, such as it is. The gas station is closed. We stop astride our bikes in the parking lot by the gas pumps. Marypat sees a local man standing on top of a tanker truck, pumping fuel.

“Can’t hurt to go ask,” she says, and walks towards him.

The man peers down at Marypat, looks at Ruby and me.

“See that brown church over there,” he points across the road to a small, nondescript building. “You can camp in the yard behind it. No one will bother you.”

“Thank you,” Marypat says. “Thank you very much.” 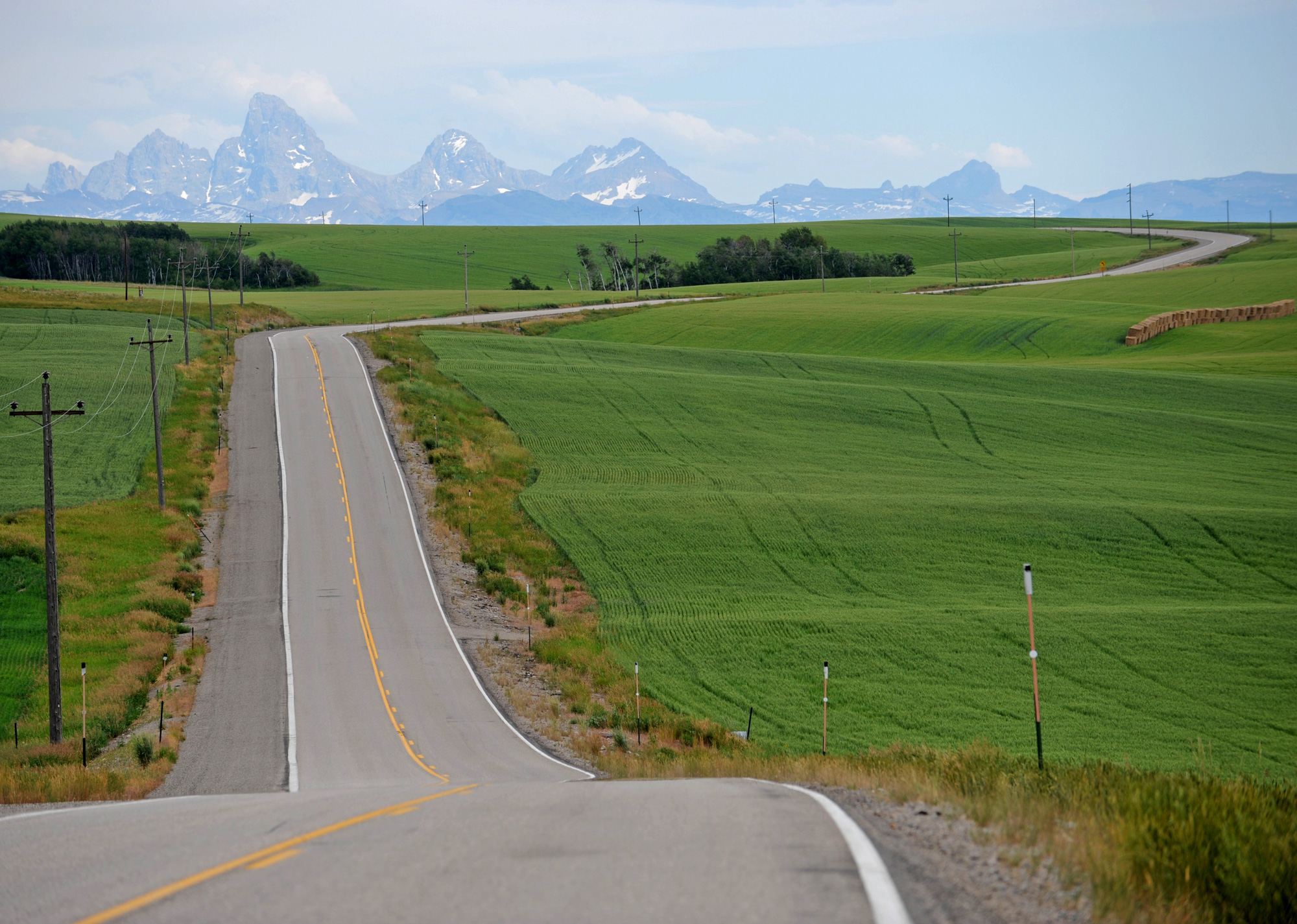 The long ribbon of road between Ashton, Idaho to Driggs is punctuated by the distant Teton Mountains. Photo by Will Brewster 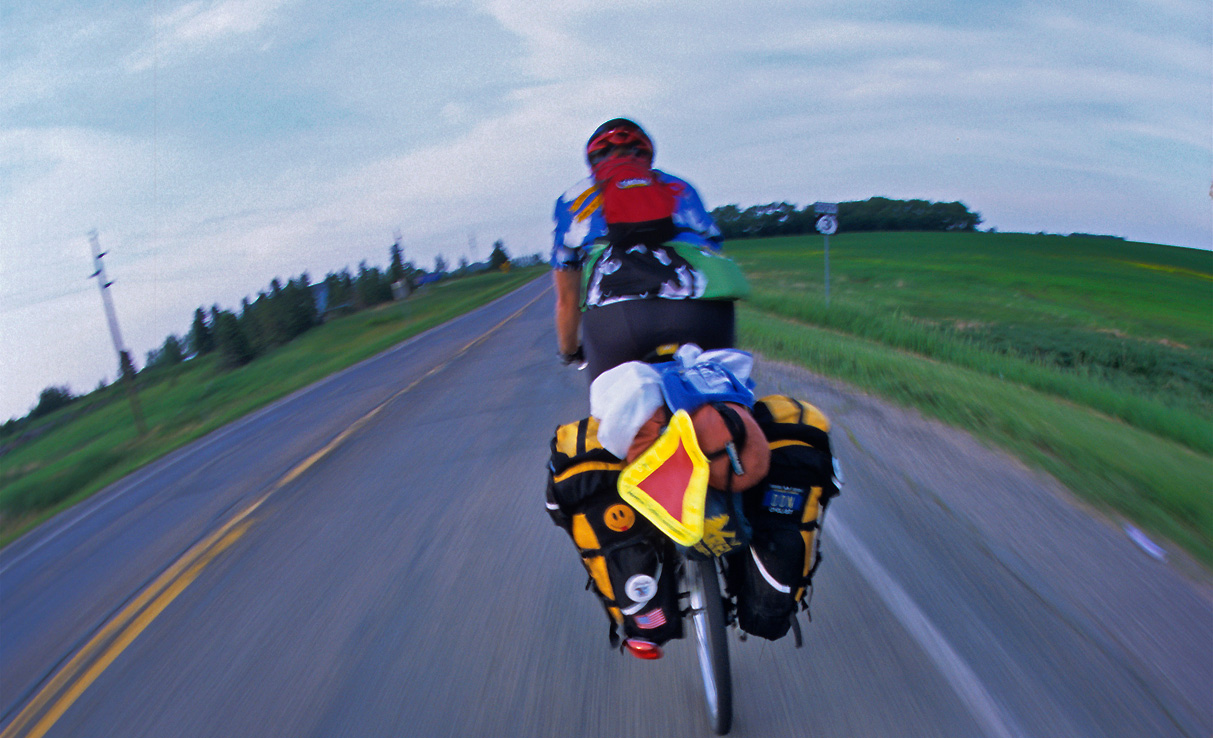 Riding 400 miles from Bozeman to Lander, the road stretches out and the miles bring hardship, anonymity, and most of all remarkable generosity from those along the way. Photo by Chuck Haney 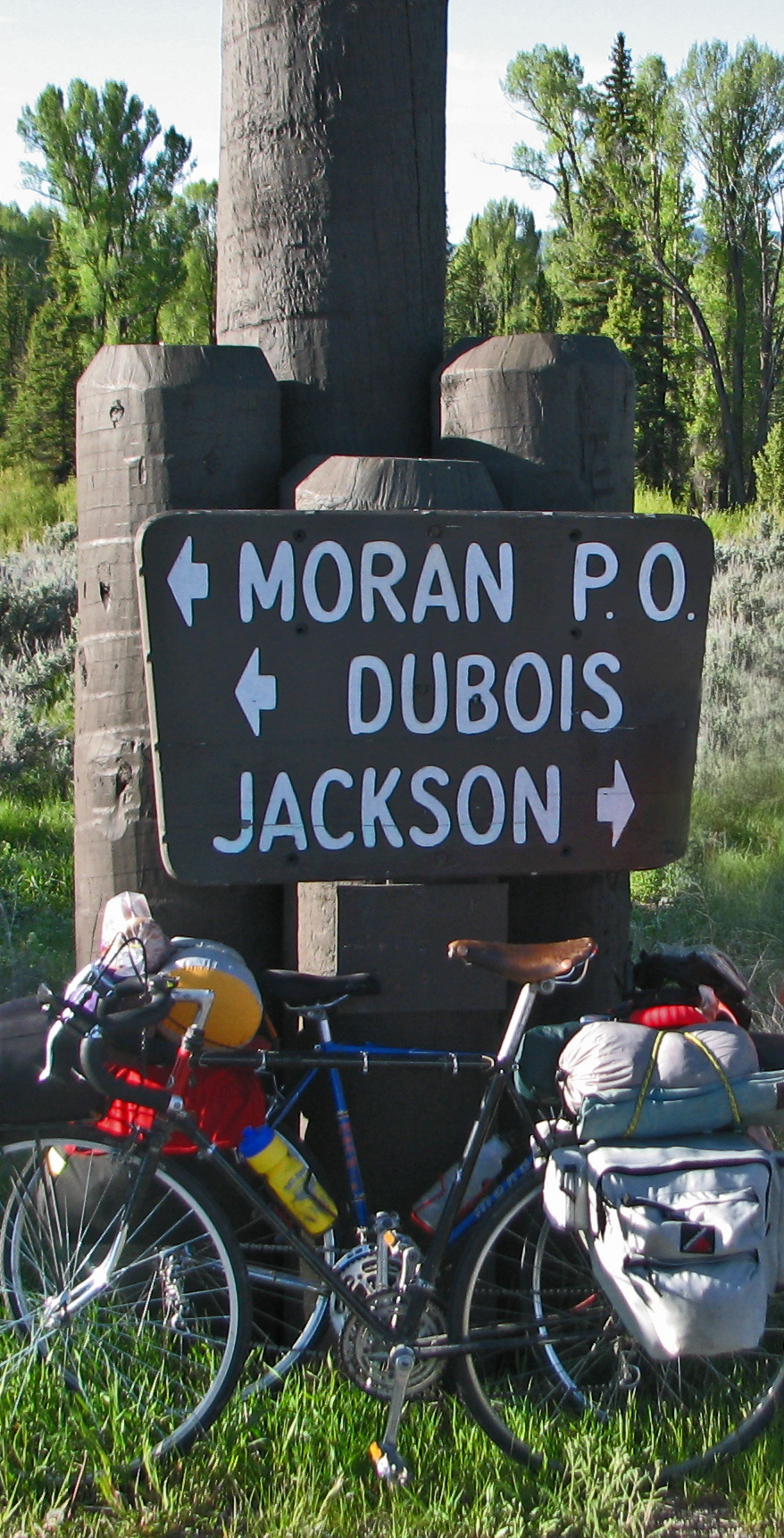 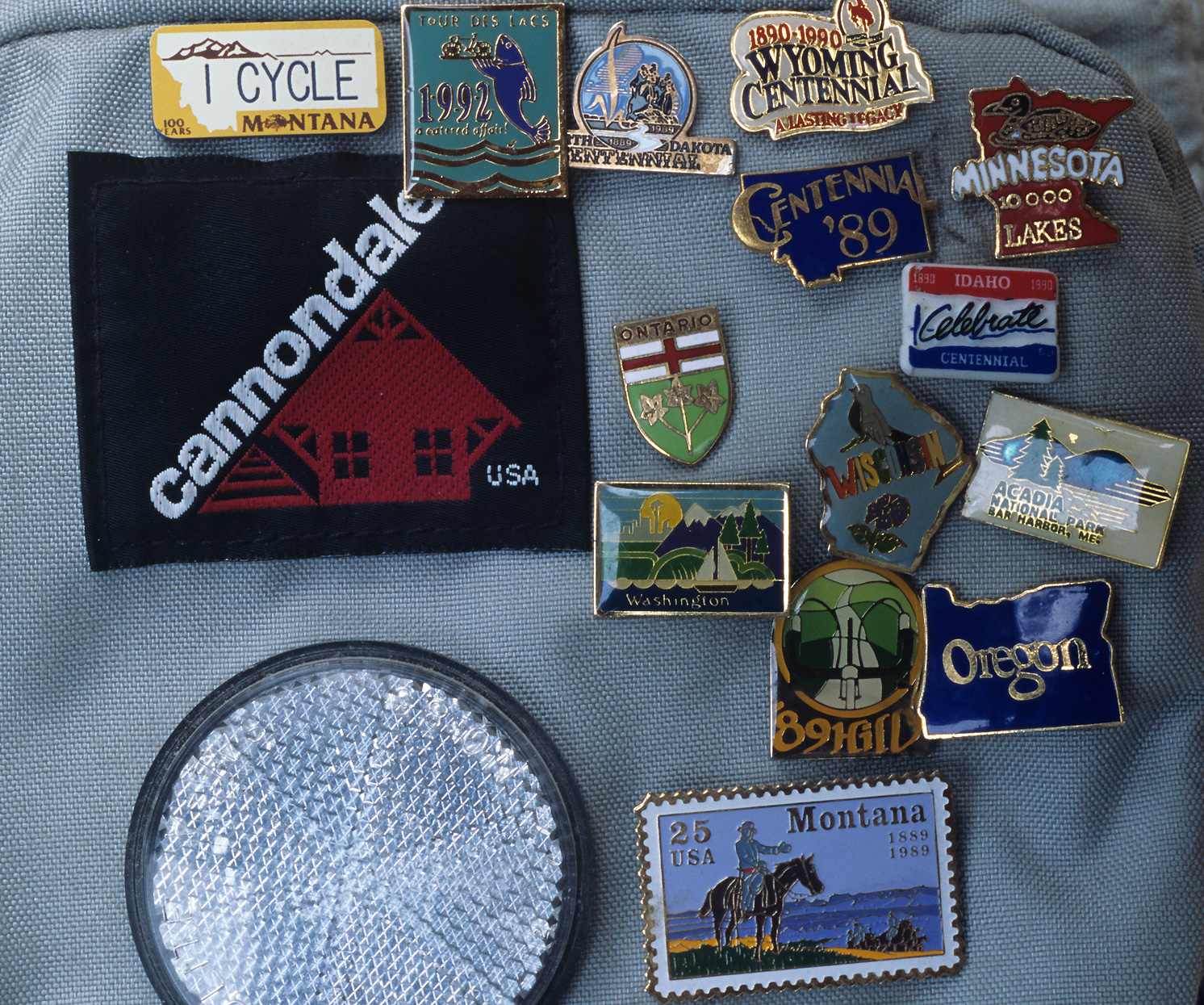