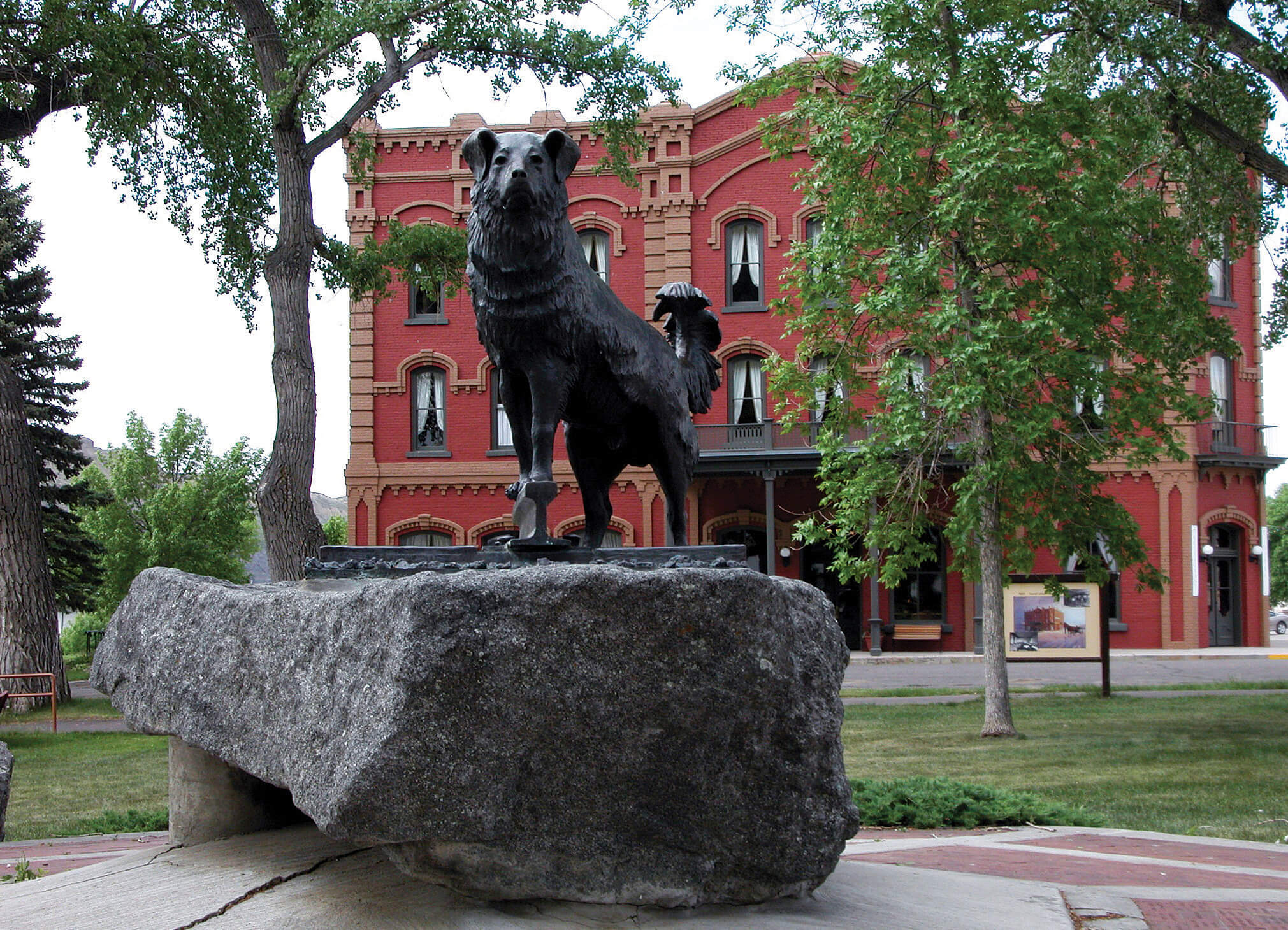 The shrill whistle of a steam locomotive pierced the air and a passenger train thundered toward the station. The sheep dog looked on as several men removed a long, rough-cut wooden box from the back of a hearse and rolled it across the platform. As the men heaved the wooden box into the train’s baggage car, the dog began to whine. Few people noticed.

When I wrote these opening lines to my children’s book, Shep: Our Most Loyal Dog, I had little idea of how this story would touch people’s lives — including my own. But, looking back almost 20 years later, I should have. 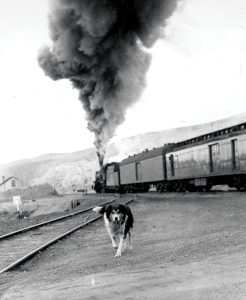 More than any other species, dogs have the ability to burrow into human hearts and touch our souls. All you have to do is look at the many famous dog stories from around the world, whether it’s the incredible tale of Hachiko, Japan’s famous “train station” dog, or the tragic story of Laika, the first canine in space. For some, however, none equals the story of a dog who lived more than 80 years ago in the remote town of Fort Benton, Montana.

Like many great stories of the past, much of Shep’s early life is steeped in mystery. He probably began his days sometime in the late 1920s and became a constant companion and helper to a central Montana sheepherder. For Shep, it must have been the best life imaginable, spending long summer days chasing “woolies” and basking in the love and company of his master.

Alas, his story took a dramatic turn when the sheepherder fell ill in 1936. A horse-drawn buckboard went out to retrieve the stricken man and take him to the St. Clare Hospital in Fort Benton. Shep followed and held vigil outside of the building, but to no avail. His master died, and, after a couple of days at the morgue, his body was taken up to the Fort Benton rail station in a wooden coffin. Perhaps totally unobserved, Shep followed and watched as his master was loaded into a baggage car, only to disappear into the distance on an eastbound train.

Sad and confused, the sheep dog watched it go. It was the first of thousands of trains the dog would watch leave the station over the next five-and-a-half years. It was also the beginning of one of the greatest chapters in the history of dogs and men — the story of the dog simply known as “Shep.” 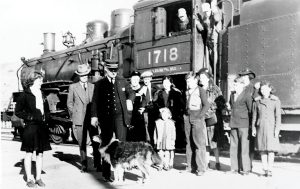 Shep had many admirers, including conductor Ed Shields, who not only befriended him, but also wrote the story that launched the dog’s fame. COURTESY OF Overholser Historical Research Center, Fort Benton

No one is certain how long the dog came to the station before he began to attract attention. No one even knew his name. Whenever a train arrived, however, the mysterious dog would appear and watch as the passengers disembarked. After about three years, Ed Shields, a conductor from Great Falls who had noticed the animal, decided to begin piecing together the details. Eventually, he figured out that the dog was waiting for his deceased owner, and in 1939, he wrote an article about it for the Great Falls Tribune.

Within weeks, Ripley’s Believe It or Not! picked up the story, and from there, it raced around the world. Newspapers across the U.S. and as far away as England published articles about the dog, who by then had acquired his new name, Shep. Hundreds of people began writing letters to the Great Northern Railway — so many that it had to assign a secretary to handle them all. People sent money, food, and offers to adopt the forlorn creature.

However, by this time, Shep was far from forlorn. Though at first standoffish, he had gradually succumbed to the attention given to him by depot agent Tony Schanche, who made him a bed inside the station and politely refused the many offers from ranchers to adopt the animal. Kitty and Steve McSweeney, the wife and son of section foreman Pat McSweeney, lived just down the tracks and helped out with feeding and caring for the dog. Soon, in fact, Shep began trotting down to the McSweeneys’ house to play with Steve and their terrier Jackie — or to get a hug from Kitty.

As Shep’s celebrity grew, people began going out of their way to travel to Fort Benton just to glimpse the famous canine, and, over the ensuing decades, Reader’s Digest, Lady’s Circle, Farm Journal, and many other magazines and newspapers published articles about him. Despite this, when I was researching Shep’s story in 2004, I had a lot of unanswered questions. Many conflicting details — some of them obvious fabrications — had been published over the years, and I was eager to find someone who could set me straight. With the help of Kenneth Robison, Henry Armstrong, and Donna Albers at Fort Benton’s River and Plains Society, I tracked down several people who had actually known the famous dog, including Tony Schanche’s daughter Irene Bowker, “Jack” Lepley — a pallbearer at Shep’s funeral — and, most importantly, Steve McSweeney, who probably knew Shep better than any other child in Fort Benton.

On August 2, 2004, I met up with McSweeney near the recently installed bronze memorial to the dog that sits in downtown Fort Benton, next to the Missouri River. A formidable, irrepressible force of nature, he exuded both good humor and an unapologetic pride in his Irish heritage. Even without a pint of Guinness to hand me, he quickly made me feel welcome as he began mining his memories about Shep. 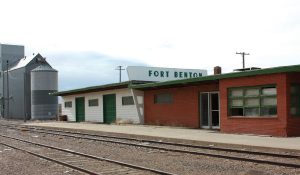 Shep eventually lived in the old Fort Benton train depot, where he met thousands of passenger trains. Photography by Sneed B. Collard III

One of the biggest things McSweeney disabused me of was the idea that Shep was a lonely, miserable character, just waiting out his days until death, in the hopes that his master would return. This was a false image commonly portrayed in many of the stories and articles that had appeared in print; but Shep, he explained, made many good friends around the station, and was popular among the children of Fort Benton. “Dogs are a lot like human beings,” McSweeney opined. “He went through a period of mourning there. And then, finally, I think we [the people at the station] were an offset to his mourning. I think in his own heart, he knew that his master was never coming back, but he was never going to quit looking for him. This went on from 1936 to 1942.”

That didn’t mean that Shep cottoned to every gawking tourist who stepped off the train to greet him. When I asked McSweeney how Shep reacted to strangers, he replied, “Very reluctant[ly]. No, you had to be one of the clan. You couldn’t just walk up there as a stranger. He might let you pet him, but he wasn’t very… he’d be ready to leave. He knew his own group, I guess you’d say. He knew the Ed Shieldses and the Tony Schanches and the Pat McSweeneys, and that was his people. His favorite people.”

Unfortunately, Shep’s story ended tragically, when he was struck by a train on January 12, 1942 — just weeks after the attack on Pearl Harbor. Tony Schanche built a coffin and Fort Benton’s city fathers decided to bury Shep on a hill overlooking the station. The funeral was attended by hundreds of people, including Ed Shields, who had hung up his conductor’s hat to become the mayor of Great Falls. 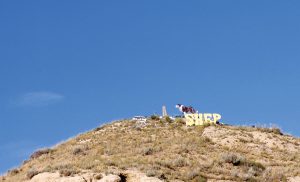 Today, the rail station is gone, but Shep’s grave, along with a monument and a large sign spelling out his name, still stands above the site where he met the passenger trains for years. To commemorate the 50th anniversary of Shep’s death, McSweeney helped spearhead the drive to create a monument downtown featuring a larger-than-life bronze by renowned Montana artist Bob Scriver. The statue was dedicated on June 26, 1994, and today, the supersized Shep is a favorite meeting place for Fort Benton locals and a mandatory stop for out-of-town visitors.

Meanwhile, Shep’s legacy endures. Historian and author Ken Robison of Fort Benton’s Overholser Historical Research Center states, “As far as our research center goes, the interest peaked — it was more than a peak, it was a crescendo — in the early 2000s, especially in 2003, 2004. Now, that pace has certainly leveled off, but we still get queries. We still get visitors. And, as far as tourist destinations, I think there are still people that actually come to Fort Benton with the number one priority of visiting Shep’s grave.”

Shep’s legacy also continues in another way. After Ed Shields published his original story in the Great Falls Tribune, he had pamphlets about Shep printed and sold them for a dime or a quarter to passengers riding through Fort Benton. He donated all of this money to the Montana School for the Deaf & the Blind, a gesture that directly and indirectly contributed tens of thousands of dollars to the school over the years. According to the school’s business manager Donna Schmidt, small donations of $25 or $100 in Shep’s name still trickle in today, money that the school uses to buy clothing and other items for underprivileged students.

Shields, and most of the others closest to Shep, have ridden the rails to the next life. McSweeney passed away almost exactly 10 years ago, on July 23, 2012, leaving his own rich legacy by not only recollecting tales about Shep, but also by promoting the town of Fort Benton.

As for Shep himself, plenty of mystery remains — especially the identity of his original owner. Despite many attempts, no one has ever pinpointed the person’s name or story. Perhaps that’s as it should be. After all, it may not be the names that matter, but the bond and love that helped create one of Montana’s most enduring and inspiring tales.