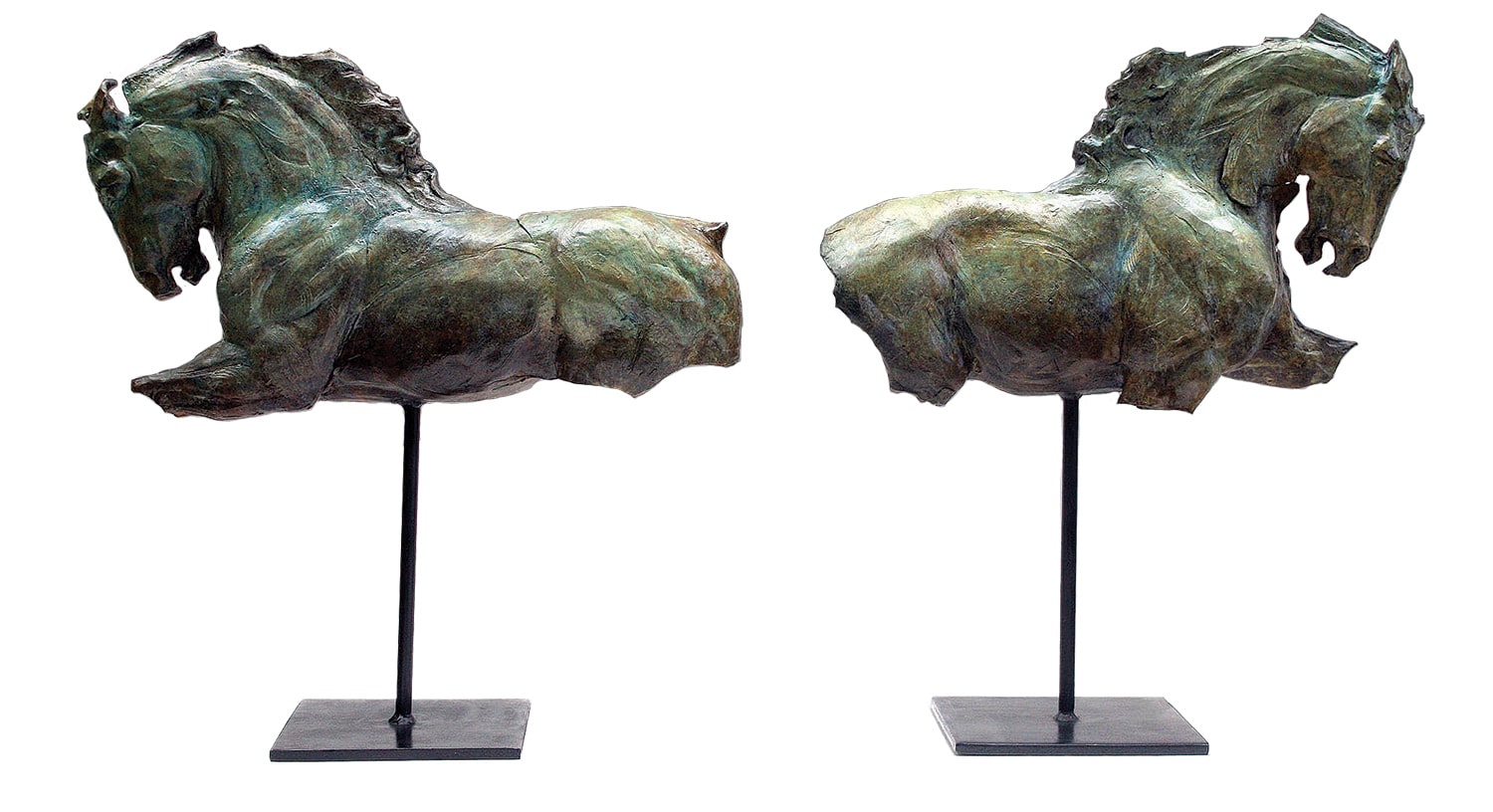 Imagine you are an artist standing in a room, surrounded by your life’s work. More than four decades of effort are displayed carefully in ornate frames and mounted on pedestals, gathered in an institution that’s lauded the best artists in your field.

Each piece represents hours upon hours of observation and studied practice. You see work that you struggled with, and that which came easily. Some will resurrect memories, returning you to the moment in your life when they were created. Your earlier work might embarrass you a little; your later work is a glimpse into the future. All of it will remind you of the risks you took to produce art for public scrutiny, critique, and, if you are lucky, adoration.

For artist Sandy Scott, this moment was not imagined. Her recent traveling retrospective — encompassing 50 sculptures and 30 etchings, along with drawings and miniatures — just finished an 18-month tour through four museums, ending this May at the National Museum of Wildlife Art in Jackson Hole, Wyoming. Curated by David J. Wagner, the retrospective included one or two works to represent each year from Scott’s career.

“It was something to walk in and have your life flash before you — 40 years of your work in one exhibition,” Scott says. “It was rather humbling to see the difference and the evolution, the change in your style and approach over such a long span of time.”

Her artwork sets itself apart by its diversity, Wagner explains. Scott’s portfolio includes public monuments and bookends. Some of her sculptures are portraits of animals, quiet and emotive, while others show the motion and flight required for survival. Her bison and horse fragments recall works from antiquity, exemplifying her academic training and love of art history. Despite all of this, she is best known for her bird sculptures, which capture a sense of flight, aerodynamics, and levity that could only come from the artist’s 50-year history as a pilot.

“Sandy has a broad and deep base of knowledge,” Wagner says. “She has a wealth of experience and is classically trained, but she is also an outdoors woman — that’s a rare combination. Overall, when you look at the strength of her work, there are plenty of examples that will stand the test of time.”

As a wildlife artist, Scott understands the anatomy, personality, movement, and habitat of her subjects, and blends those more technical aspects with artistic qualities: a visual poetry that captures the moment and inspires interest in the viewer.

“Fieldwork is paramount,” she says. “Part of what makes it my work is to see and understand my subject.”

Scott’s love of the outdoors started in childhood, and she wanted to be an artist from her “first box of crayons.” Born in Dubuque, Iowa, in 1943, she was raised in rural Oklahoma on her father’s quarter horse ranch, and accompanied him on countless hunting and fishing trips.

“I guess I’m a country girl,” she says. “I cannot imagine being in traffic every morning and evening — these things to me are as foreign as living underwater. But by the same token, people who do that can’t imagine living in the country, so it’s how you grew up and what rings your bell.”

After attending the Kansas City Art Institute, Scott worked as an animator for the movie industry because there were limited opportunities for figurative artists in the early 1960s, she says. Her fine-art career took off in the 1970s when her hand-colored etchings and prints gained recognition from major galleries in the Southwest and West. “I didn’t realize it was a niche, but I remember walking into my first gallery in Austin, Texas, owned by G. Harvey. They were showing my pencil drawings, but when the owner saw my original etchings she said, ‘This is what we are interested in.’ She took the etchings and framed them, and within a few weeks, they were gone,” she says. “And that was just the beginning.”

Scott shifted her focus to sculpture in the early 1980s, and credits an artists’ cultural exchange in China, sponsored by the state of Colorado, as the turning point. During a train ride to the Great Wall, she and a group of artists (including Walt Gonske and Glenna Goodacre), had a conversation about printmakers being the stepchildren of the Western fine art world, because prints and original graphics were not accepted at many prestigious art shows. When she returned home, she began to work in three dimensions. One of the first sculptures she created, Mallard Duet (edition of 18), was juried into the Prix de West in 1985 and won the Ellen P. Speyer Award from the National Academy of Design in 1988.

“I’ll never forget being in a group of people with my friend Bob Kuhn, and he said this about sculpture: ‘If an artist really knows their anatomy, they can create a moose sitting at a bar with its legs crossed, drinking a margarita.’ I’ll never forget that comment. That to me said, yes — you have to know your structure and anatomy. At that point, you are set free to create art, to make a statement without struggling with the mechanics and specifics of the animal.”

Splitting her time between studios in Lander, Wyoming, and Lake of the Woods near Ontario, Canada, as well as in the mountains of Northern Colorado, Scott spends time outdoors photographing, sketching, observing, and modeling. “I don’t want a moose to do something typical of a mule deer, I want it to be correct and specific to the animal itself. But I don’t want to create a specimen. … It’s a personal observation, I want to move people.”

Reflecting on her career, she identifies three primary influences: the fundamentals of her craft and her love for art history; Lake of the Woods, which Scott first visited as a child and which has became a never-ending source of inspiration; and her experiences as a teacher both at the Scottsdale Artist School for more 30 years, and leading workshops in Loveland, Colorado.

“I think art is always personal to the creator — it’s my personal response to the animal,” Scott says. “Many of my favorite pieces do not appeal to the public, but, you know, I don’t care.”

• Through Sept. 10: National Sculpture Society’s A Blessing of Animals