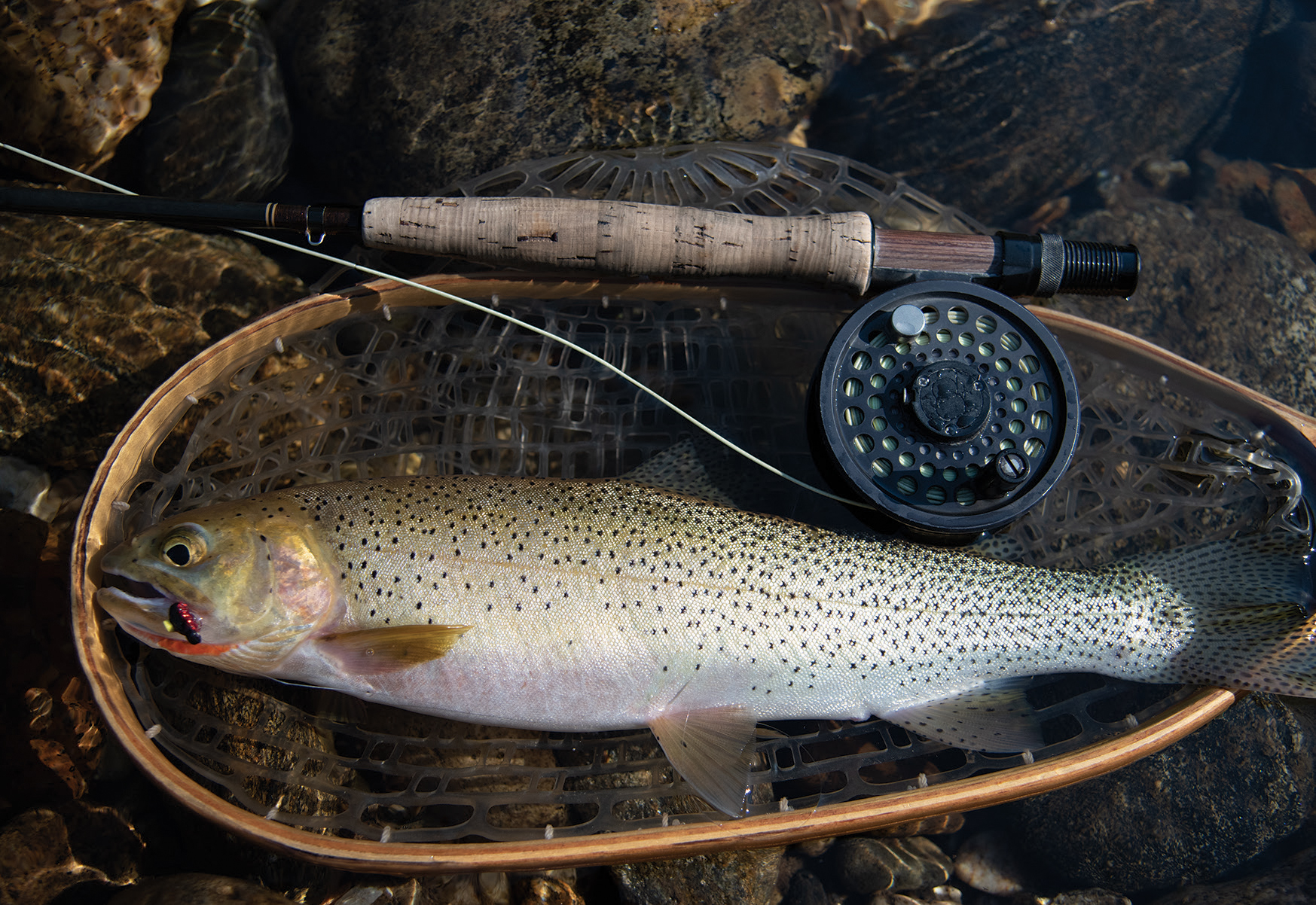 Most cutthroats in the St. Joe are pan-sized, but 15- to 20-inch specimens are possible. From summer until early fall, they are gluttons for all manner of terrestrial patterns.

On a sweltering August evening, our trip to Idaho’s sylvan St. Joe River was winding down. After dreamy days of camping, hiking, and fly fishing along the swift, intimate, fir-fringed headwaters, my wife Mary and I washed up on the wide, languid, lower reach in sleepy St. Maries, the most civilization we had seen in a while. It was finally time for a cozy riverside motel, hot showers, and spicy Mexican food.

Meanwhile, in front of our room, carefree kids took advantage of the lingering heat with flying, frolicking leaps off the dock. It was the perfect metaphor for how the St. Joe satisfies diverse recreational appetites: native westslope cutthroats, rising like ballerinas; joyful watercraft flotillas; peaceful public campsites; cyclists whistling down mountain trails; and hikers and horseback riders tripping up remote streams. But the watershed is also littered with fading historical remnants tracing a very different past. 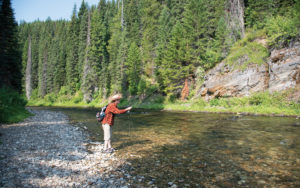 The author fishes for cutthroats on the upper St. Joe, near the Forest Service’s cozy, end-ofroad Spruce Tree Campground.

The St. Joe was christened by the Jesuit priest Pierre-Jean De Smet (known as Father De Smet), who helped found the Sacred Heart Mission on the lower part of the river in 1842. The St. Joe received the description “shadowy” from the tall, stately forests hugging the river. Another moniker was “swiftwater,” for its raging upper reaches.

Rising at nearly 6,500 feet on the west slope of the Bitterroot Mountains, the St. Joe meanders for 140 miles, dropping to 2,129 feet at its mouth in Lake Coeur d’Alene. Because large boats can ply the deep, placid lower river — 19th-century steamboats ferried up to 1,000 passengers — it is the world’s highest “navigable” river by some definitions. Below St. Maries today, one might even spot tug boats pulling log rafts, hinting at the river’s history. During high flows, especially, certain upper cataracts are best approached only by expert paddlers. By midsummer, the headwaters are a wade-only angling proposition, mainly accessible by trails, rough roads, and primitive campsites.

If one makes it to the end of the narrow, winding road at the Spruce Tree Campground — like Mary and I did — a non-camping option is a five-mile hike or horseback trip to the historic, riverside St. Joe Lodge, a rustic log structure built in the 1940s. From here, intrepid anglers roam upstream for many miles, all the way to the source at St. Joe Lake, tucked below ridges forming the Idaho-Montana border.

The St. Joe ranks among the longest free-flowing streams in the sprawling Columbia River Basin. Its pristine status was recognized in 1978, when Congress added 66 headwater miles to the federal Wild and Scenic River system, and included provisions that help conserve other great Western trout streams, including Montana’s Flathead, Wyoming’s Snake, and Oregon’s Deschutes. When Congress passed the original legislation in 1968, it stated that rivers which “possess outstandingly remarkable scenic, recreational, geologic, fish and wildlife, historic, cultural, or other similar values, shall be preserved in free-flowing condition, and that they and their immediate environments shall be protected …” Another indication of the St. Joe’s recreational and aesthetic attributes: 89 miles of Forest Highway 50 and County Road 456 — hugging the stream from St. Maries to the Montana border — were designated the St. Joe Scenic Byway, a spectacular drive even for those not packing fly rods. 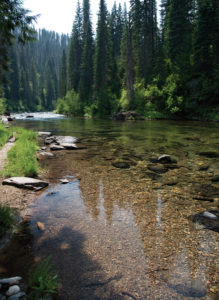 Deep, rocky runs like this one help make the St. Joe among the best rivers in the country to catch native westslope cutthroats, with protected bull trout sharing the water. The biologically and historically rich stream is a federally-designated Wild and Scenic River.

Native salmonids in the St. Joe include westslope cutthroats, protected bull trout, and mountain whitefish. In some areas, anglers might also hook introduced brook and rainbow trout, or even salmon ascending from Lake Coeur d’Alene. Salmon and steelhead are not indigenous, because they couldn’t surmount the downstream falls in the Spokane River in what is now its namesake city, but have been planted here during modern times. Adding to the mix, the lower river and backwaters below St. Maries support warm-water species, including largemouth bass, northern pike, crappie, perch, bullhead, and channel catfish.

St. Joe’s fishery took a heavy hit from logging, but today the remaining submerged snags provide trout cover. Facilitating a remarkable recovery, the Idaho Department of Fish and Game designated the upper 50 miles as catch-and-release waters in 1989. In their comprehensive Flyfisher’s Guide to Idaho, Rocky Barker and Ken Retallic explain: “There might have been more logs in the river than cutthroats in the 1970s. Not today. The St. Joe has turned into one of the finest cutthroat fisheries in a state loaded with good cutthroat waters.” 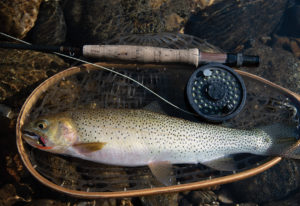 Most cutthroats in the St. Joe are pan-sized, but 15- to 20-inch specimens are possible. From summer until early fall, they are gluttons for all manner of terrestrial patterns.

The St. Joe hosts many mayfly, caddis, and stonefly hatches, which are typical in the Northern Rockies, including during spring pre-runoff action. In my estimation, the classic way to approach cutts is with garish, Frankenstein-like terrestrial and attractor patterns from July into September. It’s mesmerizing to watch cutts slowly rise from a deep, crystalline run, carefully inspect a meaty Fat Albert, Madam X, or Chernobyl Ant, then flash the white inside of their mouths, as if slyly grinning at you. Just don’t make the mistake of setting too soon, before the fish has definitively grabbed the fly. Recite a mantra to hold back your overeager instincts, like “God save the Queen” or some other nerve-calming gibberish.

Unlike rainbows, cutts typically avoid the main current, hanging out in slower runs, pools, and eddies. During the summer heat, hit the river in the mornings and evenings, as the fish sulk on the bottom during warm afternoons.

As with other iconic Idaho cutthroat streams, like Kelly Creek and the North Fork of the Clearwater River, it’s important to get cued into seasonal migrations. These area cutthroats journey to upper reaches for spring spawning, and many loiter through the summer before drifting down to deeper, more sheltered lower pools and Lake Coeur d’Alene, in September, where they spend the winter.

Early inhabitants utilizing the St. Joe’s rich resources included the Coeur d’Alene Indians, who maintained winter villages near the mouth of the river and summer fishing camps on the upper parts, where they harvested salmon-sized bull trout. Prior to becoming a Wild and Scenic River, the St. Joe watershed attracted gold miners, loggers, and railroad magnates. A stretch of the fabled transcontinental Chicago, Milwaukee, and St. Paul Railroad was laboriously completed along the St. Joe in 1909 — after 1,000 workers tunneled 1.7 miles under the Bitterroot crest. “Those gleaming streaks of steel connected us to the outside world,” reminisces longtime resident Hugh Peyton in Up the Swiftwater, a 1995 history by Sandra Crowell and David Asleson. The railroad helped bring three presidents to the area, along with film stars like Clark Gable. Legend has it that Bing Crosby hired a cab in St. Maries to haul him 80 miles upstream to go trout fishing. 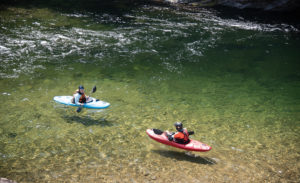 While the narrow upper St. Joe is mainly a wade only endeavor, a diversity of float-based recreation is possible downstream, ranging from expert only to easy flat water.

The final passenger train rumbled through the valley in 1961, the last freight train snaked past in 1980, and tracks and ties were subsequently pulled for salvage. Homesteader Annetta Bellows recalls how trains had an emotional resonance for St. Joe residents: “It always thrilled me when whistles echoed through the mountains,” she says in Swiftwater People, a 1979 oral history edited by Bert Russell. “From our home at night, we could see the headlight of the locomotive flashing down the canyon, followed by the long train of lighted Pullman cars.” Today, part of the Route of the Hiawatha in the upper St. Joe has been transformed into one of the country’s most spectacular rail-trails.

Beginning in the 1880s, the giant firs, cedar, hemlock, spruce, and white pines made the drainage a mecca for the logging industry. Loggers used an elaborate system of “steam donkeys” (steam-powered winches), chutes, flumes, and splash dams to flush millions of board feet of timber off the steep mountainsides, sending them careening down major tributaries like Marble Creek to the St. Joe, where they floated to downstream mills.

Rip-roaring logging camps and makeshift railroad towns were served by rowdy saloons, backwoods moonshiners, and “ladies of ill repute,” leaving behind ghosts that haunt today’s more serene landscape. Local Joseph Halm reflected on the rail town of Grand Forks in Up the Stillwater: “During the mornings, the court (town square) was almost deserted except for a few sobering stragglers sitting on empty beer kegs piled in front of 12 or 15 saloons.” 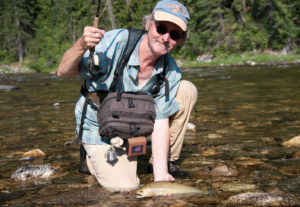 The author displays a westslope cutthroat before releasing it. In addition to the St. Joe, other East-central Idaho streams, like Kelly Creek and the North Fork of the Clearwater River, afford similar angling experiences in spectacular settings.

In 2007, the Forest Service identified two remaining Marble Creek splash dams — in operation from 1915 to 1931 — as barriers to migrating cutthroat and bull trout. Subsequently, the agency worked to partially breach the dams, while maintaining the structures’ historical integrity.

The St. Joe was ground zero for the 1910 “Big Burn,” America’s largest forest fire, with walls of flames dozens of miles wide, soaring as high as skyscrapers. Artillery-like lightning strikes, locomotive sparks, scorching temperatures, extreme aridity, and tornado-like winds created a roaring maelstrom that incinerated 3.2 million acres in Idaho, Montana, and Washington, killing more than 70 firefighters, 59 of whom were interred in St. Maries. Regional towns like Taft and Grand Forks were cremated, as were vital railroad trestles, hindering evacuation.

In Timothy Egan’s 2009 book The Big Burn, which won the National Book Award, early forest rangers reported an apocalypse: “They wrote of giant blow torches flaming from treetop to treetop, of house-size fireballs rolling through canyons, pushed by winds of 70 miles an hour. They told of trees swelling, sweating hot sap, and then exploding; of horses dying in seconds; of small creeks boiling, full of dead trout, their white bellies up; of bear cubs clinging to flaming trees, wailing like children.”

The St. Joe hamlet of Avery was nearly surrounded by flames that raced down mountainsides to the river; a last, desperate train was loaded with women and children on August 21, barely escaping the conflagration. The remaining local men frantically worked with a heroic African-American regiment of U.S. Army “Buffalo Soldiers” to ignite a backfire to stop the inferno. Against the odds, it worked, and the town was saved. Today, visiting anglers can still buy supplies in the tiny town of Avery — just as Mary and I replenished our ice and beer supply — as they travel through a largely healed landscape, the eroded fire ash long flushed away.

In a 1995 story on the St. Joe in The Spokesman-Review, Jim Kershner observed: “Logging trucks still rumble through the area, and a few optimistic souls still scour the hills searching for gold nuggets. But now, the future of the St. Joe may actually depend less on loggers and miners than on campers, hikers, hunters, and especially fly fishers, who descend on the upper St. Joe as sacred ground.”

The St. Joe and its fabled forests and fisheries survived a cauldron of fire, mining, and intense logging — seeming death, then resurrection. The river is a case study of how catastrophic environmental damage can heal, given time. To careful observers though, the evolving landscape and shadowy river remain heavily footnoted with history.